Adventures Of A First Time Buyer – Time To Call The Professionals

I have been living in my house for about 3 months now (I think). Although we still have a long way to go, we certainly are starting to speed up the whole process now. But now it’s time to call the professionals.

Don’t get me wrong, I love the journey – lol jokes, all I ever do is slag off the decorating in my other blog posts. I just want it all to be finished now! I’m craving to start buying proper furniture, get shelves, display my coffee table books, have my record player out and make the house truly feel like a home.

Time to call the professionals – Let’s finish the Flooring!

There’s been one monumental task that we’ve been waiting to get done now for quite some time and that has been the flooring in the downstairs of the house.

We knew we wanted to get the living room floor sorted out because the old one was vile. It was very cheap laminate flooring that was gnarled, uneven and worn down. The skirting boards had huge gaps underneath them which were drafty and the room, in general, was a bit of a mess.

The kitchen had vinyl flooring which wasn’t actually too bad. Honestly, I could have made do with that, but the previous owners had managed to tear and snag it when they removed the washing machine. So I thought in for a penny in for a thousand plus pounds – let’s do the kitchen too.

I’ve had more samples than you’ve had hot dinners

I had a rough idea of the sort of thing I’d want to go downstairs. We went for medium grey carpets upstairs so I wanted something to match somewhat. However, we had no idea what type of flooring, texture, price-point etc we should actually go for.

Our joiner came round and over a week he brought us a ton of different samples to have a gander at. Honestly, he was like Willy Wonka – but with laminate flooring instead of chocolate.

As soon as we went through them all, there were a couple that stood out to us and both me and Tom were unanimous in our decision for one of the off-white greyish designs.

After we picked, we were ready to rock and roll

As always, there was going to be a snag, why? Because it’s me and nothing ever goes smoothly. When the joiner (Steve) came round to asses the costs, measurements and job at hand, he noticed that the floor was quite uneven. Not just the laminate, the actual stones underneath. 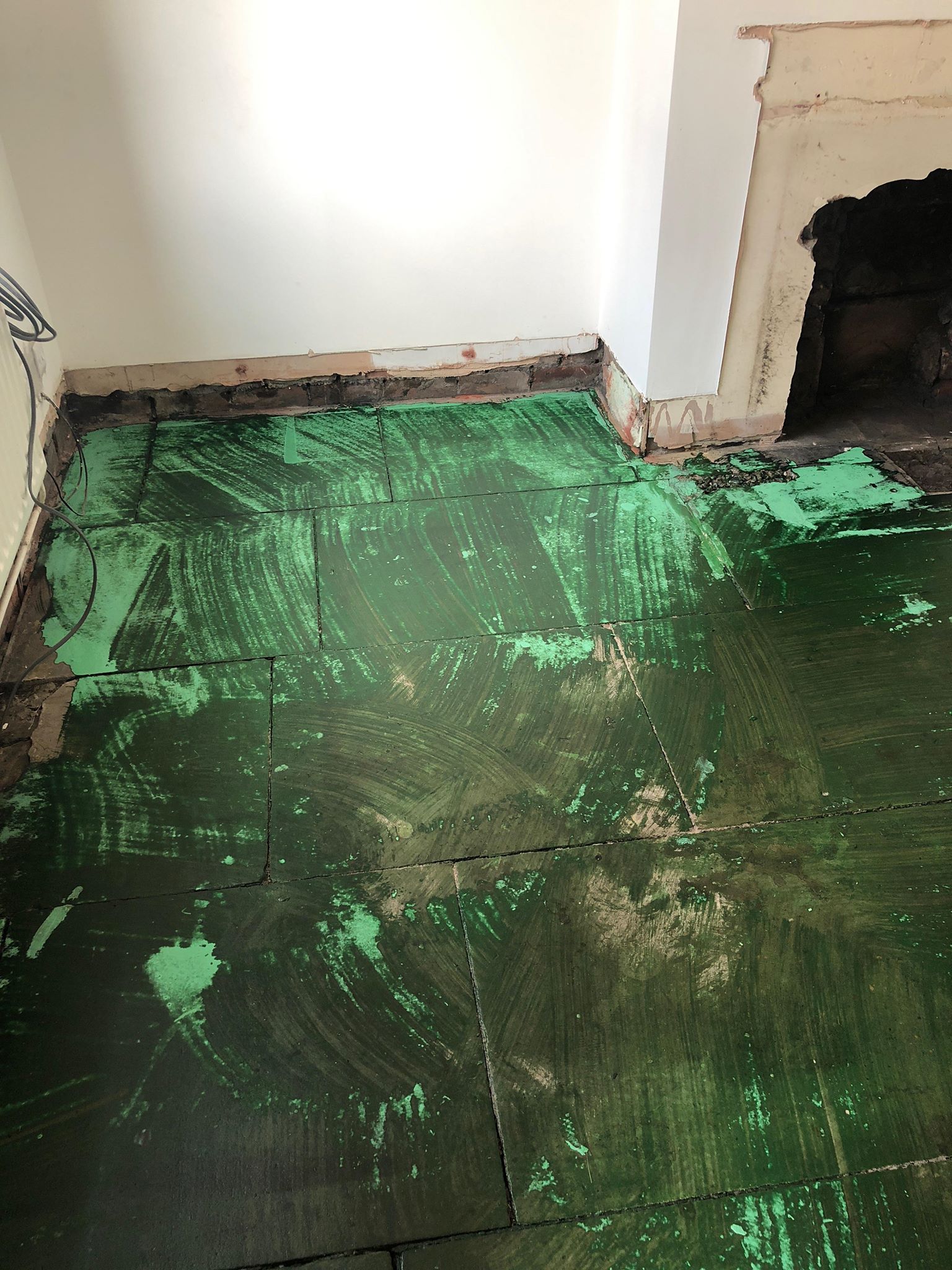 In fact, the kitchen ones were pretty knackered. Because of that, we had to get the floor levelled which was an added cost. At the time this sucked, now that I’ve seen the results, I’m glad we did it.

Everything got levelled and tidied up and because of what I wanted to do with the fireplace, Steve even had to get the inside crevice of that flattened out too. 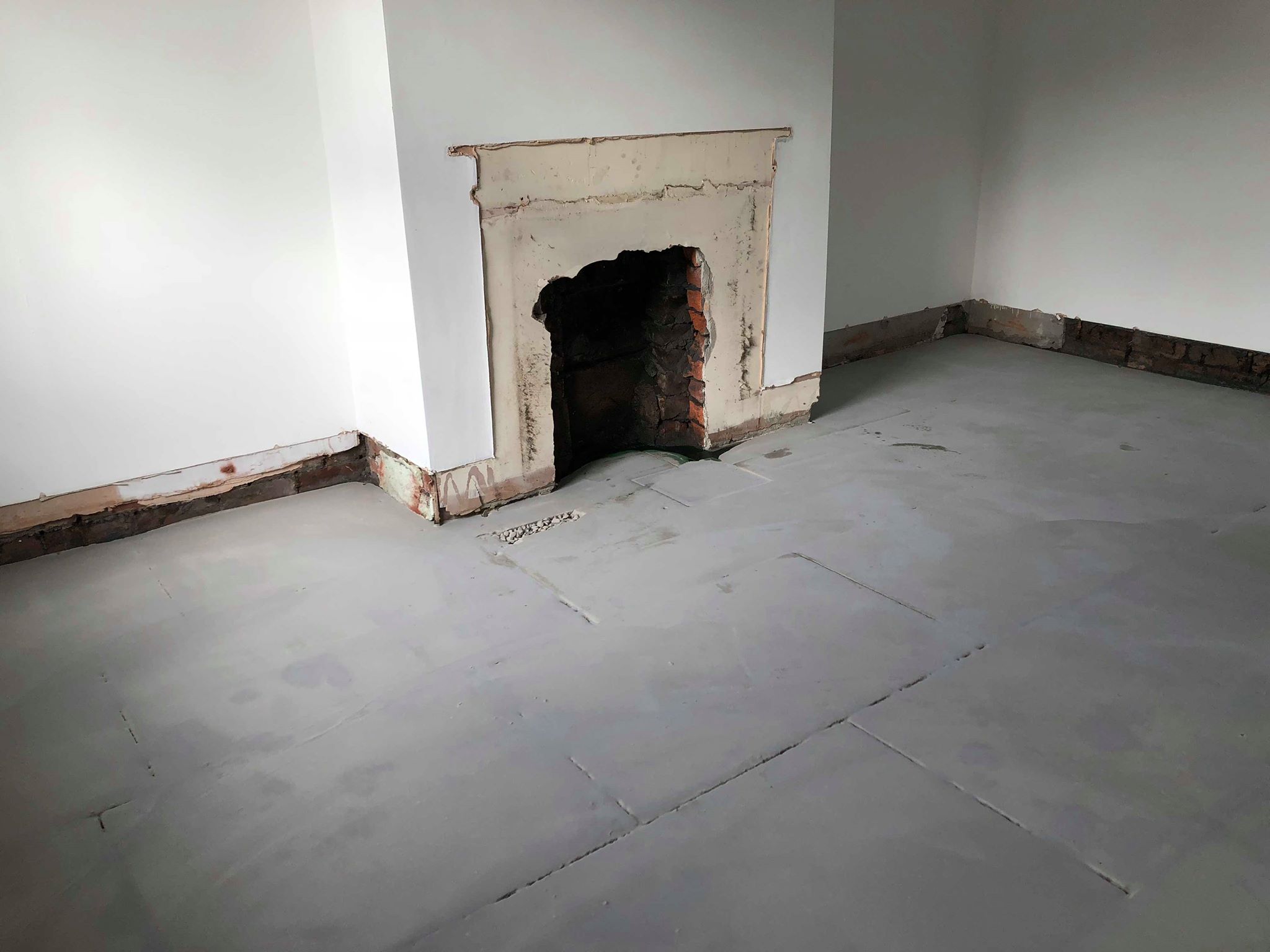 The old skirting boards have been ripped off (thank the Lord). I’ve had a stretch of wire get placed behind it so that I can have electricals behind the old fireplace.

‘Why?’ You ask with sheer giddiness and glee. I want to put some form of neon light or bulb in the fireplace to give the room a bit of a ‘quirk’. I might try and figure it out before I call the professionals to make me one. 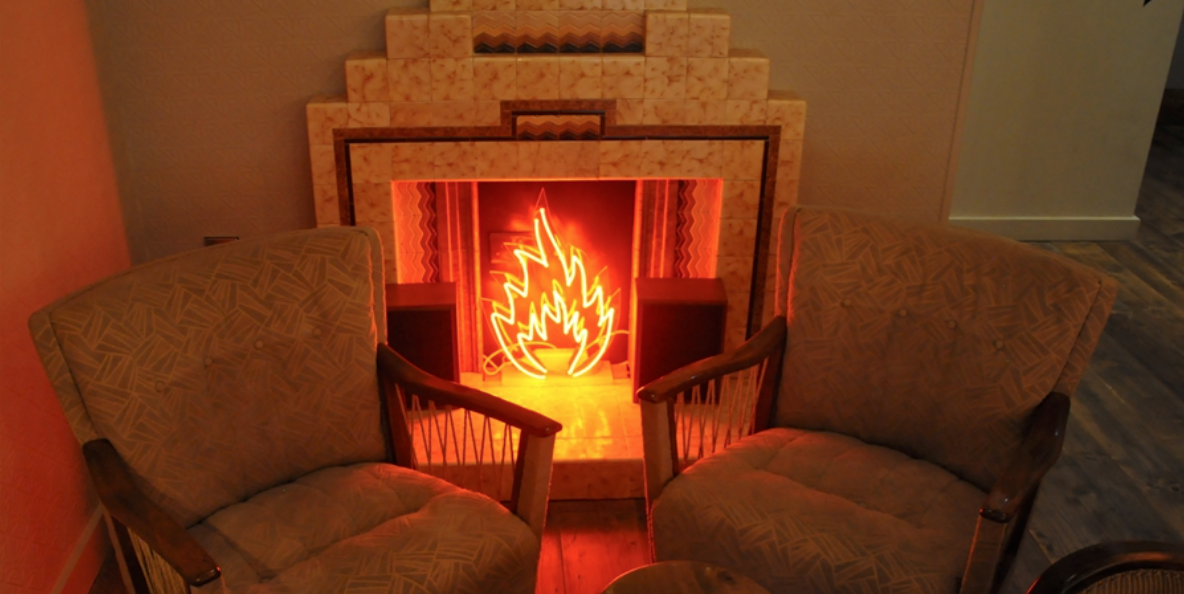 The inspiration came from the 200 Degrees coffee shop. The chain’s neon fireplace design to be more specific. I have no idea where to begin with this but hopefully, I’ll find a way (or someone who can help). It’s a pipedream idea for now, but one I’m sure I’ll be able to do something with.

But as usual with me, something is bound to go wrong

And guess what – it did! Nothing too major, but the washing machine and it’s original spot is like me and my favourite suit – too big to fit in it anymore. Yes, I have just compared my fat carcass to my washing machine. Don’t get me wrong, it’s a very fashionable washing machine, but it would be better if it were a little smaller. Christ, this quickly turned into therapy!

Basically, since levelling and raising the flooring, the washing machine is now too big for the gap. Thankfully, one of the handymen who came round has managed to remove the legs on it. From there we managed to squeeze the great big metal love handles into the crevice.

But as each piece of flooring went down, the sadness from my big fat head was replaced with low-calorie joy and happiness!

It certainly was time to call the professionals and leave them too it. I wasn’t in when they were doing their stuff but Tom kept me updated with photos as did Steve.

Seeing the off-white/pale grey flooring slowly fill the room was like a Grand Designs orgasm. It doesn’t look like much from the photos, but the difference it made to the rooms is monumental.

Along with the large windows at 10ft ceilings, the room feels so much brighter and more breathable. Once we get some furniture, curtains and art on the wall, it will begin to feel like my home.

Slowly but steadily, you can see the ground floor start to look like a livable space. Getting a sofa is next on the priority list.

And the kitchen looks monumentally better with the new floor (don’t judge the mess in the photos).

But the thing that I love seeing the most with the new floor is actually quite a minor detail, but it’s one that really makes me feel good.

It may sound stupid, but it’s being able to see the flooring seamlessly travel from the living room to kitchen.

It honestly is the little things in life. I just want everything to be finished now so I can truly relax. I just want to sit down on my sofa with a cup of tea like the true northern housewife trapped in a young gay’s body that I am.

@HarryJBartlett#AdventuresOfAFirstTimeBuyerAdventures Of A First Time BuyerAOAFTBdecoratingHarry BartlettHarry J Bartletthome renovations
Prev post Being Blocked By Facebook – An Open Letter Of Discontent
References ASOS x The Simpsons – What Can We Expect To See?