Being Blocked By Facebook – An Open Letter Of Discontent

Dear Facebook, please stop deleting, blocking and shaming creatives for trying to express themselves through their art. It seems that now more than ever, people are feeling like they have to abide by some pretty strict, stagnant and shite rules and regulations on various social media platforms.

You may remember that the image below was my previous cover photo for the 5th instalment of the ‘Adventures Of A First Time Buyer‘ series. Well, it seems Facebook doesn’t like having fun. Or showing any form of nudity that was allowed on pre-watershed British television in 1969. Apologies to the youthful body of Barbara Windsor. As you can most likely notice, I’ve popped my head onto her body from the Carry On Camping film.

I’ve gone and changed it so I don’t upset the personality-free robots at Facebook. I don’t think it has the same character, but fuck’em, they can’t hold a good girl down! As you know, I take great pride in my Adventures Of A First Time Buyer cover photos. I try to give a humorous nod to the past and do it all with a wink and a grin to classic pop culture. To cut a long story short, Facebook deleted my article from their site without giving me the reason for breaking the terms. Not only that, my Facebook profile was blocked for 24 hours! The cheeky madames.

Passively, I decided to change the new photo to a picture of myself as an old woman doing yoga because, like the image, Facebook’s guidelines are dull as fuck!

But why has a humorous image from a 1969 family film been blocked when there are so many worse things on the social media?

I can’t even begin to tell you how many times I’ve seen a video of somebody shitting onto their mate’s chest for a ‘prank’ or seeing women being beaten or racial abuse. But I upload a picture with barely a glimpse of a tit and all hell breaks loose! My friend Elisha had her Instagram reported because she uploaded a picture of me to her story wearing the classic tit top from Vivienne Westwood.

I think because Elisha is a woman and will have had filled in the ‘gender’ parts of her profile creation as ‘female’ that this will have a negative effect on her. I uploaded this photograph the very same day as an actual picture and I’ve still had no issues.

Ok, so I’m going to get a little bit ‘conspiracy theorist’ for you all now. I think that these apps use a similar form of ‘facial recognition’ software that allows you to tag recognisable faces in your friendship group to basically hunt down rogue breasts. It’s lady boobs that the internet has an issue with, so it would make sense for them to mark the ‘female’ user profiles as ‘priority’ to hunt down and check that there’s no nudity first.

Why? We already know that Instagram has got pretty intense with the #FreeTheNipple movement that has been happening. Still, to this day, men can have their nipples out and women can’t.

So what did I do? I wrote a complaint to Facebook

Did it send? Did it fuck. Being blocked by Facebook is a battle you just cannot win. For the article that was blocked, I’m now essentially on a permenant ‘warning’ with the social media account. If I breach again, it will be 3 days then after that I could be facing a permanent ban. All of my photographs, friends and memories, erased in an instant for flashing a bit of Barbara Windsor’s side boob.

When my account was blocked, I was given a very kind gesture of being able to appeal to Facebook to find out why my account may have been flagged as inappropriate. However, every time I tried to send the message it said there was an error and that it couldn’t be sent at this time. Nice to know that Facebook likes to help out their users in need.

Anyway, have a little gander at what I wrote. It’s quite passive and a little sassy. But trust me, I held my tongue so much! 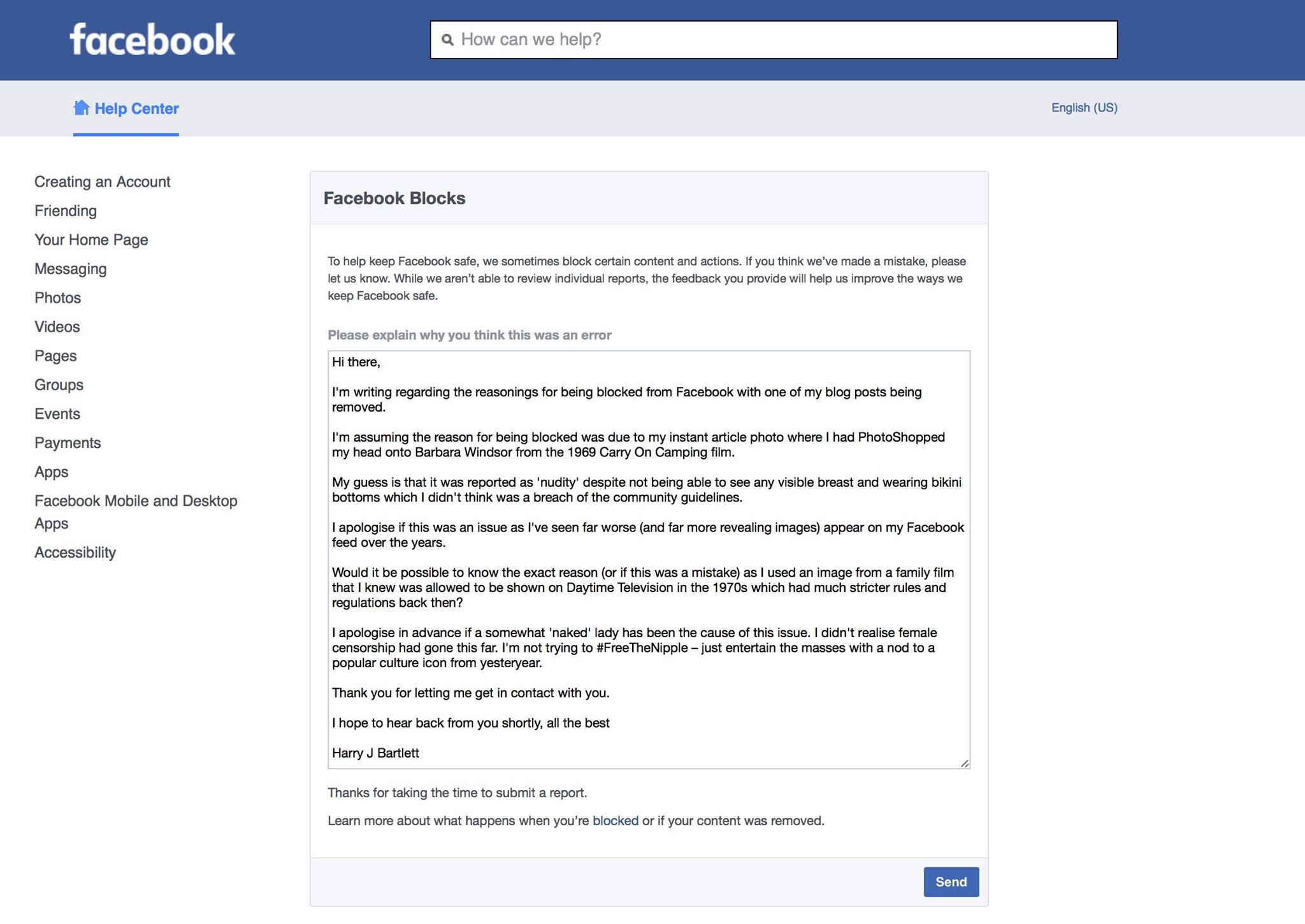 If you can’t read on the image, here is what I wrote:

Hi there,
I’m writing regarding the reasonings for being blocked from Facebook with one of my blog posts being removed.
I’m assuming the reason for being blocked was due to my instant article photo where I had PhotoShopped my head onto Barbara Windsor from the 1969 Carry On Camping film.
My guess is that it was reported as ‘nudity’ despite not being able to see any visible breast and wearing bikini bottoms which I didn’t think was a breach of the community guidelines.
I apologise if this was an issue as I’ve seen far worse (and far more revealing images) appear on my Facebook feed over the years.
Would it be possible to know the exact reason (or if this was a mistake) as I used an image from a family film that I knew was allowed to be shown on Daytime Television in the 1970s which had much stricter rules and regulations back then?
I apologise in advance if a somewhat ‘naked’ lady has been the cause of this issue. I didn’t realise female censorship had gone this far. I’m not trying to #FreeTheNipple – just entertain the masses with a nod to a popular culture icon from yesteryear.
Thank you for letting me get in contact with you.
I hope to hear back from you shortly, all the best
Harry J Bartlett

But is being blocked by Facebook becoming a regular occurrence for those who shouldn’t be?

It’s not just me that has suffered, countless people have. Especially in the LGBT entertainment industry. I can’t count how many drag queens I have on Facebook (there’s a fair few). Due to Facebook’s harsh rules, drag artists and entertainers aren’t allowed to use stage names if they don’t look ‘real’. I understand that Facebook wants to cut down on ‘fake profiles’, but I don’t know how many people are going to get catfished by a 6ft4 drag queen called Penis Williams [not a real drag queen].

I asked a living legend in my local, Miss Uma Daze of the Viaduct Showbar. Uma Daze is a Leeds-based drag queen/entertainer who has herself been confronted by Facebook’s pointless guidelines:

“It frustrates me how Facebook think they can tell me who I want to identify as! Plus, using my birth name means I lose out on future gigs and potential employers.”

Some queens have already had their profiles either blocked or they’ve been forced to use their boy names. That doesn’t seem right to me. Do you really think Elton John uses his real name? No, Reginald Kenneth Dwight doesn’t have the same ring to it –but his stage name hasn’t been removed. Lady Gaga is another example. Or single names like Cher, Madonna, Adele – they’ve not been forced to add a surname to their accounts.

And it doesn’t stop at drag queens

Photographers are having their artwork deleted for ‘inappropriate content’. Who gives a shit if I see a bit of nipple through a sheer blouse that costs more than 3 months rent. It’s art, just embrace it. Kids are allowed in art galleries, but we don’t quickly Tipp-Ex out the nipples from such beautiful renaissance paintings.

In short, please don’t be a social media dick. Let art be art, people have the right to be offended! Rant over.