The groundwork has been laid and now the fun can finally begin! Well, I say fun… I’ve never felt so stressed in my life. “Why?” I hear you all beg, because trying to get the tedious but necessary jobs finished to allow me to do the fun tasks is an absolute chore. I just want to throw a little glitter on it!

Anyway, I feel like I’ve rambled long enough, now I can finally talk about the fun things like decor and and bizarre trinkets. Though I moan a lot about the process, we’ve actually got a lot done – there’s still along way to go, but we’re doing good.

I still find it crazy to think we’ve been living in the house for over a week now! Yet it feels so normal, though we practically live upstairs (apart from using the kitchen) it feels like it’s always been my home.

The shell is complete – time to throw a little glitter on it!

The WiFi is a go

We’ve got a home number now and though most people don’t use them, I’ve got a lovely spin-dial phone that my dear mother goose bought me so I can feel like a young member of Dynasty. All I need now is a sheer, floor-length nightgown with feather trim and a cigarette on a stick.

Now, because I want to feel like an eccentric billionaire in an old Hollywood romance film, I was thrilled to find this magical gift my dear mother had bought me a couple of years back for when I get my first house.

I must say, hearing an authentic bell ringing as somebody makes a call is divine. I love answering the phone with a merry old “Bartlett residence, how may I be of service?” but it’s usually just somebody trying to sell me something… Nobody wants to actually call me.

Wallpaper – I don’t know the meaning of “Understated”

Now, this has to be the tacky as hell masterpiece that I’ve been waiting for (even months before I had found the house) – the wallpaper. For a while now I’ve wanted a bizarre feature wall that’s quite bold as I never got the opportunity to do so before. But finding inspiration has been quite challenging.

However, a good few months ago I turned on the TV to watch EastEnders and it hit me. Right there on my telly was the most beautiful (repugnant and tacky to most) wallpaper I had ever seen. No, not Pat Butcher’s leopard print hallway. It was Mick and Linda’s peachy flamingo bedroom. I knew I had to have it!

After I did a good bit of Googling, I managed to find the exact one for a pretty reasonable price. I have to admit, I’m in love with my flamingo wallpaper though it has been hit with mixed reviews.

I figured that this is my one chance to do something a bit ‘quirky’ with the house as I’ve never had the opportunity before. I’ve just got it done as a feature wall in the bedroom (originally I wanted it to be in the living room). 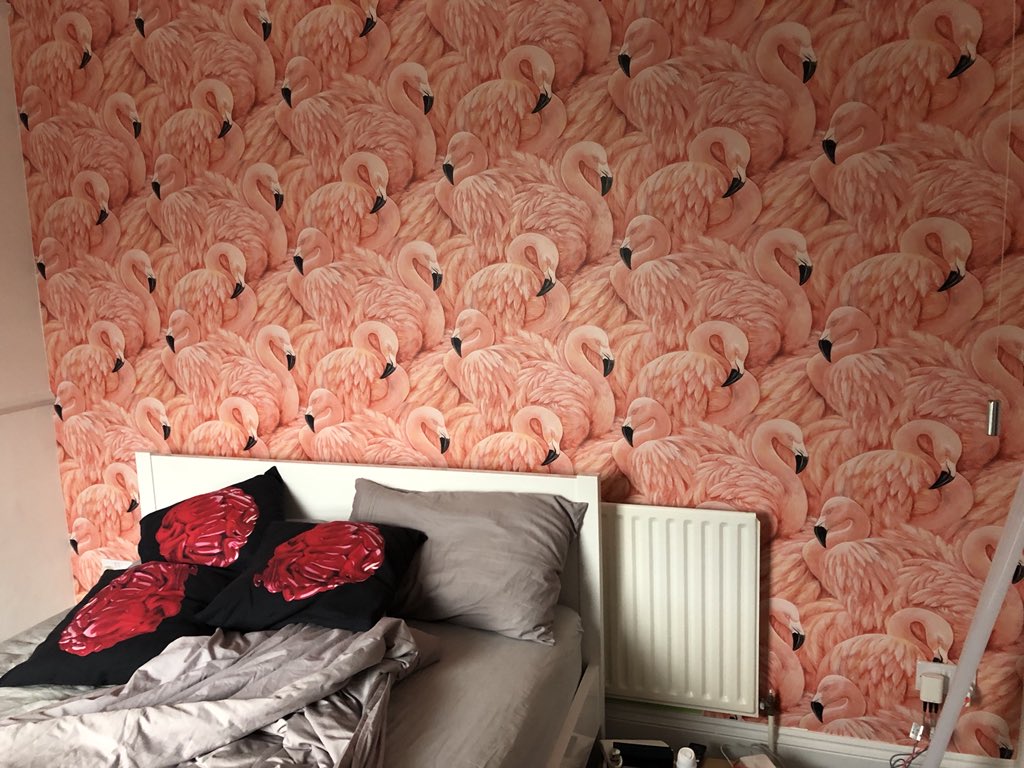 Darren the decorator did an amazing job getting my pink flamingo fantasy up on the wall. I have to admit, my ever-so-tasteless boudoir is starting to come together beautifully.

Starting to put away clothes (eventually)

Since we’ve moved in, we’ve practically been living out of suitcases. We’ve got a beautiful new washing machine but lack some of the basics like an ironing board (and an iron). Of course, this means clothes are everywhere in the house at the moment. Unfortunately, with the living room being unfinished (God, I wish I’d have made this one of the priority rooms),  it means that we’ve had to bundle everything we own upstairs or in the kitchen out of the way of the dirt and mess.

So what have I bought so far to get us by? Malm. Yep, Malm – IKEA’s most generic yet highly purchased collection for millennials in need of some cheap and (relatively) easy to build furniture.

Don’t get me wrong, I know it’s not the most exciting nor is it the most creative, but considering it’s going in a bedroom with a white bed and flamingo wallpaper, I don’t think it needs to really be a ‘feature piece’.

So far, I’ve managed to squeeze most of my possessions into one of these units and my TV and vintage home phone sits nicely on top. Job well done I’d say.

What Else Is New?

To be honest, other than that I’d say nothing much. I’ll keep updating as new things keep coming. We plan on making moves with the living room this week. That’s the target. I want to get the fireplace sorted and the new flooring for the living room and kitchen booked. *Fingers crossed*

But remember, when in doubt, just throw a little glitter on it and the world’s your oyster!