Adventures Of A First Time Buyer – Barbie Gets Her Dream House

It’s be a short while since I did an ‘Adventures Of A First Time Buyer‘ home update. But I promise, we’re still very much at work with getting the renovations done to make this a liveable house. I’ve titled this article ‘Barbie Gets Her Dream House‘ as we’ve finally moved into the two-bed back-to-back terraced house. Now it feels like a reality, for a while it felt like we were just painting an empty box that ‘one day’ we might get to live. That thought-process can be quite disheartening as it felt like a never-ending chore. But now that we’re actually living in it, it feels good.

Barbie Gets Her Dream House

It’s been taking us a while, but we’re now in a liveable house. Granted, it’s not fully-furnished or 100% hospitable but for now we can eat, sleep and shower in it and that’s just about all we need.

Now, as you can probably imagine, we’re all running out of steam. There’s only so many times you can paint a wall white before wanting to scrape your nipples off with a hot knife. But alas, the fun continues. Since the last update there’s been quite a few changes and tweaks to the house.

Firstly, we have new carpet. Lord Jesus Hallelujah! The repugnant brown and beige striped carpets that had been gnarled by animals for years are long gone! Ripping them up sent my cat allergies into overdrive with the amount of hair that had gathered in-between every crevice of every nook and cranny.

There was cat hair everywhere, in every corner of every room, attached to every cupboard, across the fireplace and even around the oven seals. WTF?!

But what really got me was the stench of cat piss that had soaked through the world’s fugliest carpet and into the underlay. Bloody lovely isn’t it?

Carpet in the toilet?!

You heard that correctly. The previous owners, two ladies (not a Little Britain sketch) decided that as they don’t harbour a penis, they might as well carpet the toilet and warm their feet as they have a dump. Great, I can only think of the urine build up from having male friends and family round would be.

But I’ve cast of the shackles off my female overlords and got a lovely vinyl flooring put down instead. Immediately the room feels fresher and piss-free.

You may remember my rant about the previous owners buggering up the front door in my second ‘Adventures Of A First Time Buyer‘ article. Well, I finally got onto solving the problem. Sadly, it was more costly than I first thought – we needed to get a new front door.

The door was in such bad shape that it would be foolish to throw money at it to try and fix the problems. It was letting in a slight draft from where we had to sandpaper and drill the cracked part down to stop it getting stuck on the doorframe.

Not only that but the locks were stiff and the top lock specifically had managed to slap a part of the key meaning I could only lock it from the outside – not great when you plan on living in the house.

However, thanks to Papa, we found a really good guy to get me a new door sorted and installed. I wanted to keep some of the old elements of the house that made us fall in love with it. The 100+ year old house had charm so we wanted to replicate that. 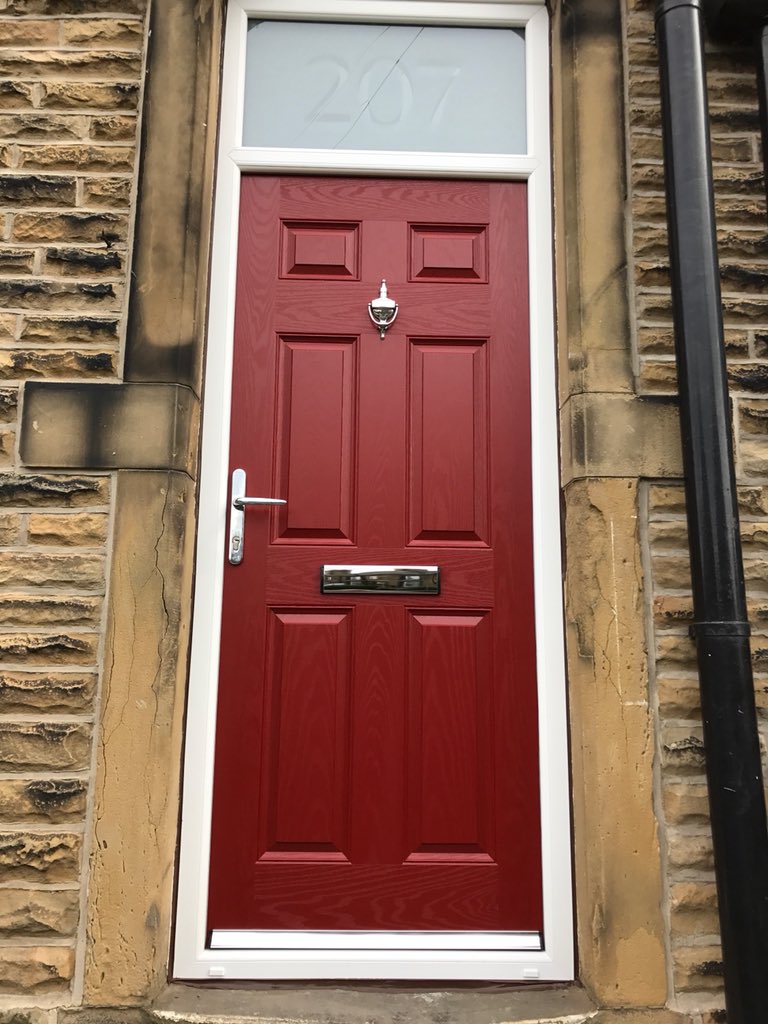 In the end, I opted for a modern composite door that looked reminiscent of the old one, not only that, but we thought the red stood out so we got another red door. (It’s a lot brighter than the picture shows).

In a true ‘Barbie Gets Her Dream House’ fashion, I told Tom I was going to replace the front door with a lovely bubblegum pink – he was not amused. So, red was the next best thing.

Shaving Down The Doors

Now, shaving down a door is something I never felt I would need to do, nor would I ever want to do it again. This task was quite possibly one of the most infuriating, time consuming, physical and dull task I’ve had to do so far to the house.

My dad, Tom and myself have had very little fun trying to get this task done. It honestly felt like some sort of evil ‘team building exercise’ designed by Jigsaw himself. Many a splinter, slice and f-word have been thrown in all directions.

Alas, getting nice thick carpets for comfort have actually caused me more physical (and emotional pain).

Maybe I’m getting a bit too pernickety but the more we renovate and get closer to moving in, the more things I realise I want to change. Impractical? Yes. Slowing down my moving in date? Yes. Running out of money? Absolutely. Furthermore, I’m sure it’s better to get it all done in one go… Isn’t it?

My Lord I’m in love! I have to give 100% props and praise to my dear mama Jill for this one. Mother goose knew how much I detested the old fireplace and so she online and started hunting for a reclaimed fireplace or a prettier frame.

The girl done good. After a pretty good hunt, she managed to find a guy selling a proper cast-iron fireplace for £50 that was in good condition.

Whether or not it’s going to fit into the actual space in the wall is a different story, but at least we’ll have fun getting to destroy some brickwork with a hammer.

My very wonderful decorator (Darren) has managed to remove the wooden fireplace frame so neatly that once I’ve got the cast iron fireplace in place, the frame should neatly fit back over the top.

Nothing much to write here, we swapped out some ugly wooden ones for some modern chrome curtain rails. Job’s a good one. Sure, dad decided he didn’t need to follow instructions because “how difficult can it be?” The answer was quite. 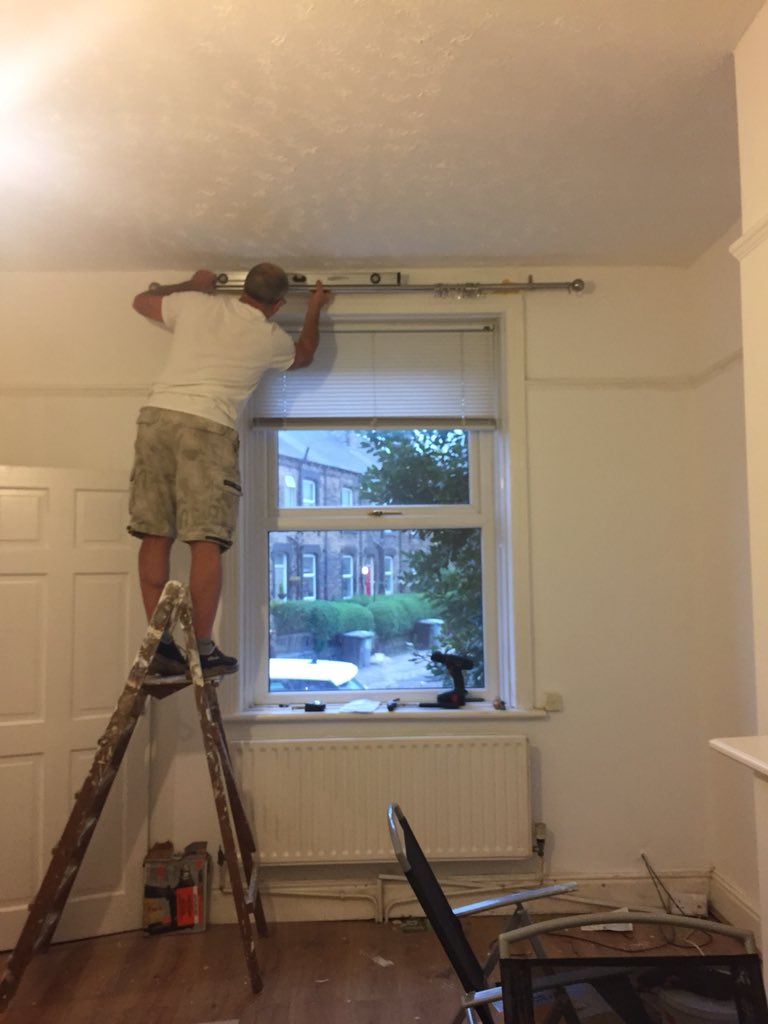 Dad left out a piece, built the rail upside-down which meant having to start again and rebuild it the correct way – more effing and jeffing.

We’ve Also Got Some Furnishings Now

At last, finally we have some things in the house to make it start to feel like a home. Granted, we have very little things actually in the house, but it’s a start and that’s all that matters.

Ok, so maybe this was a slightly over the top purchase, but do I regret it? Do I buggery! I knew I was in need of a fridge and a freezer. So when I got the idea of an American fridge freezer into my head, naturally, I couldn’t get it out. In fact, it became a justifiable necessity in my mind.

For getting a mortgage from Nationwide I got £500 back in the first month of getting my keys. So that money went towards a brand new Haier fridge freezer.

This will definitely come in handy for parties as there is a ton of space for alcohol!

The Bed Has Been Built

You can’t move into a house without a bed, I mean, you could, but I’m not in the scouts and don’t intend on using a sleeping bag.

Thankfully we’d ordered the bed way before we’d even finished completing the paperwork to actually get into the house. Christ on a bike though, it was as heavy as a heavy thing on a heavy day. 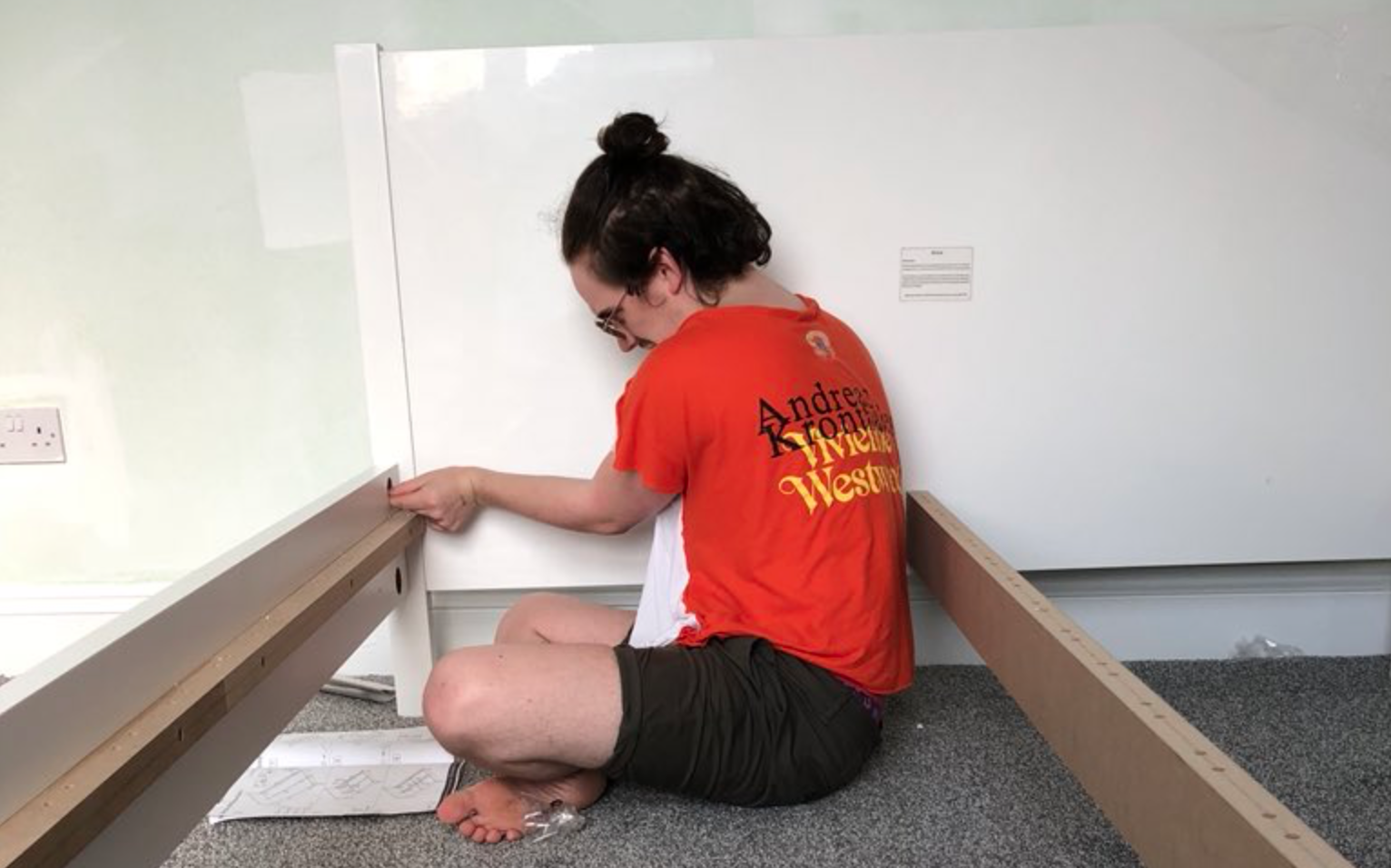 Building it wasn’t too bad however, Tom just sat there watching me build it all up… I think he prefers the painting elements of the house. I’m just happy that we’ve finally got a king-size bed to sprawl out on!

So that’s where we’re up to so far.

Most of the difficult bits are done now but we’re still far from finished. We’re in need of new flooring in the living room which we’ll probably carry over into the kitchen as well to make everything look nice and coherent.