London Fashion Week Men’s is over and done with for another season. I saw some really great shows, I saw some weird shit and I saw a hell of a lot of womenswear for a seasonal event called ‘London Fashion Week Men’s‘. But I’ll get into that pretty quickly, fear not. I’m going to keep this blog post short and sweet because I’m sure you don’t want to listen to my ramblings.

LFWM was a bit of a last minute one for me. I was just finishing up at my old job and because I was waiting to be paid, I only booked my accommodation and my travel a couple of days before. Of course, that means I didn’t apply for any show tickets, but let’s be honest, when do I ever? 🤷🏻‍♂️ 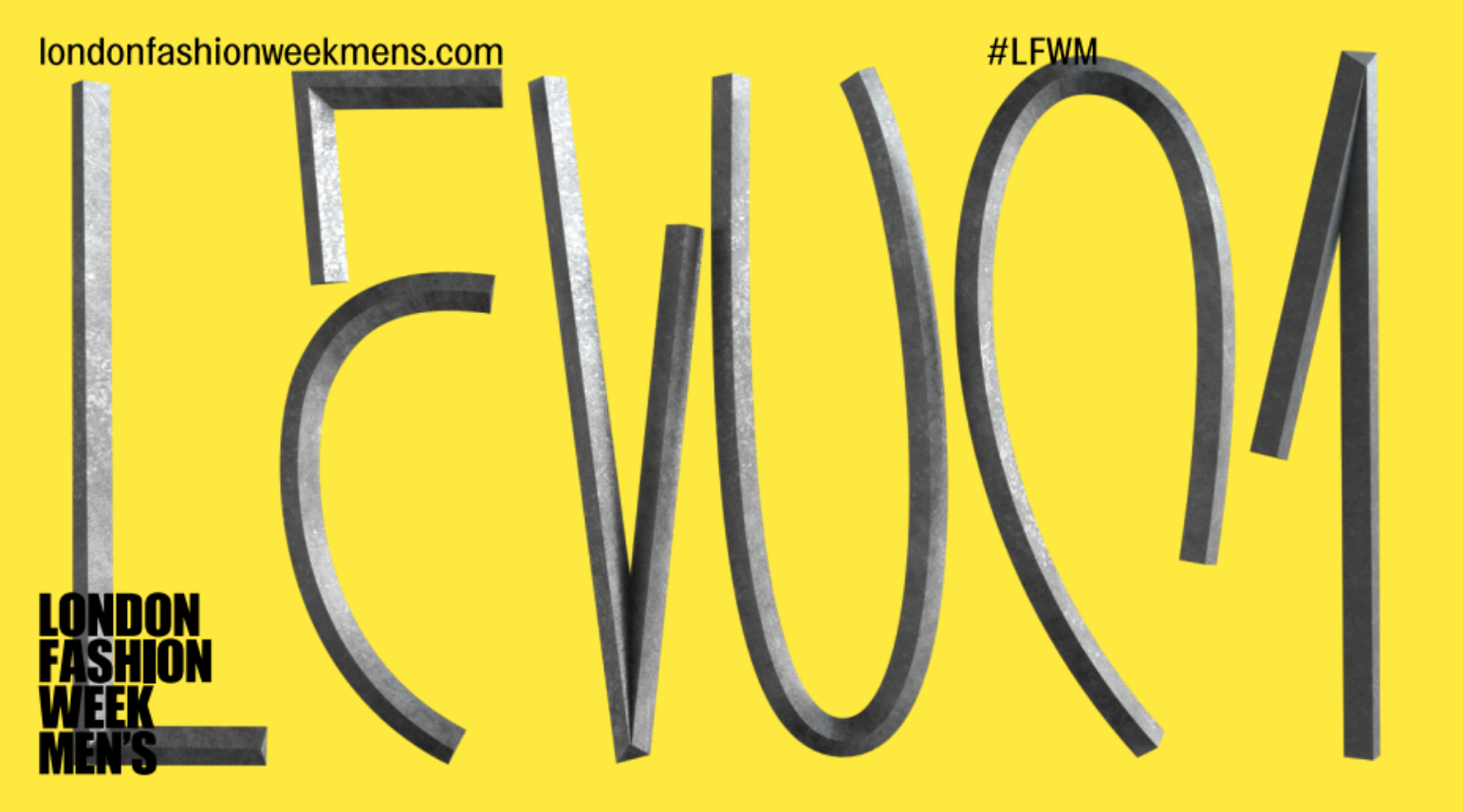 This year felt a little different as the show space had moved from 180 The Strand to Truman Brewery in Brick Lane which felt so much nicer! The presentation rooms were better at 180 I think but the runway space was so much nicer as it was a big empty warehouse room that the runway took place in. 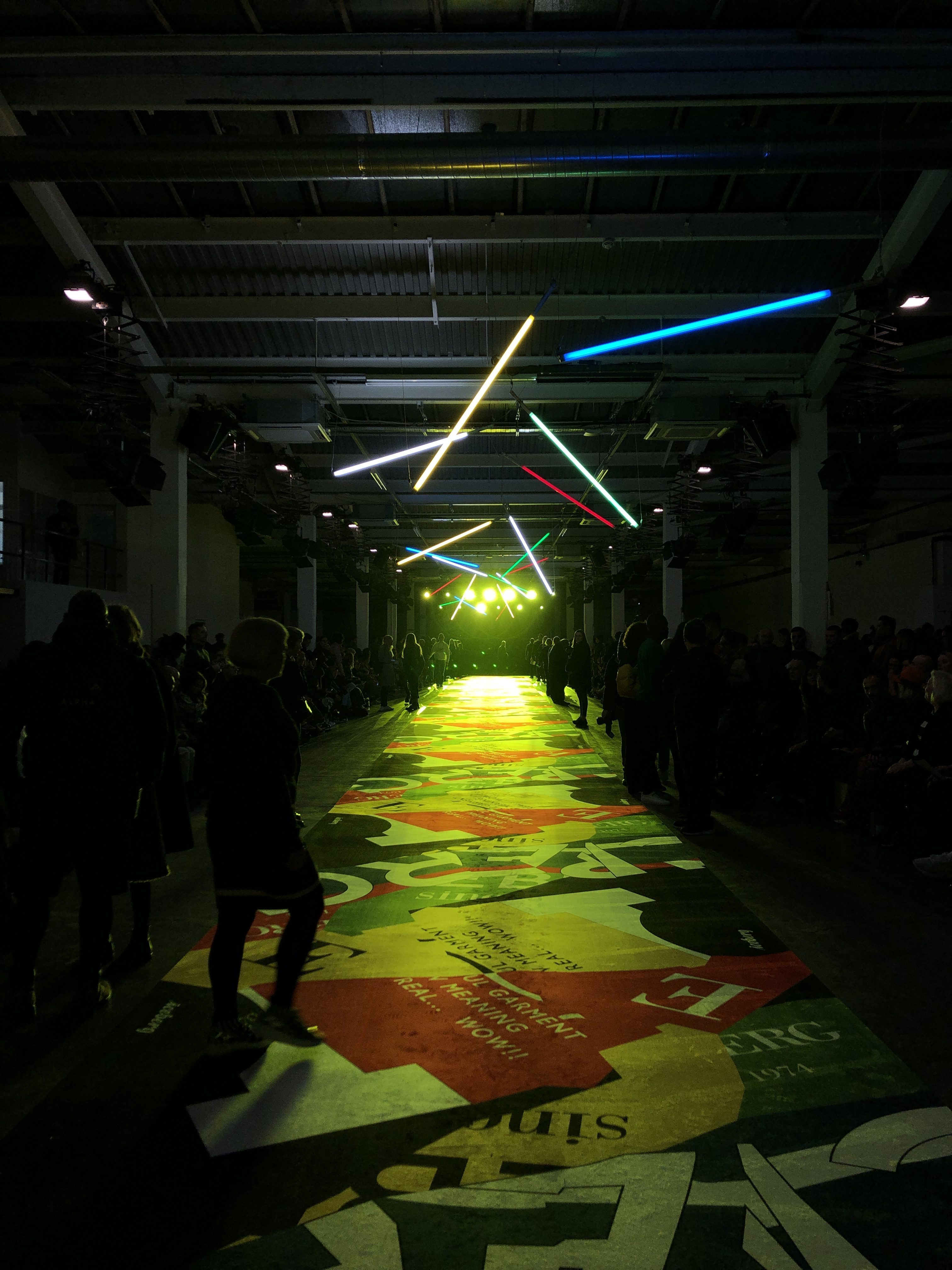 Not only that, it was the first time I was representing for my new job at SLB PR. Despite not even starting my job properly and only doing a day and a half’s work before I needed to get my train to London, SLB PR very kindly let me head ‘darrrn sarrff’ in exchange for some social media content for their channel – abso-bloody-lutely.

Of course, I then had to book my tickets last minute as I didn’t think I would have been able to go and so I ended up in a very grim B&B that was basically a converted ex-council house where every room became a crappy makeshift bedroom. But, I had an en-suite and it was a 7-minute walk from the venue so I couldn’t complain too much. 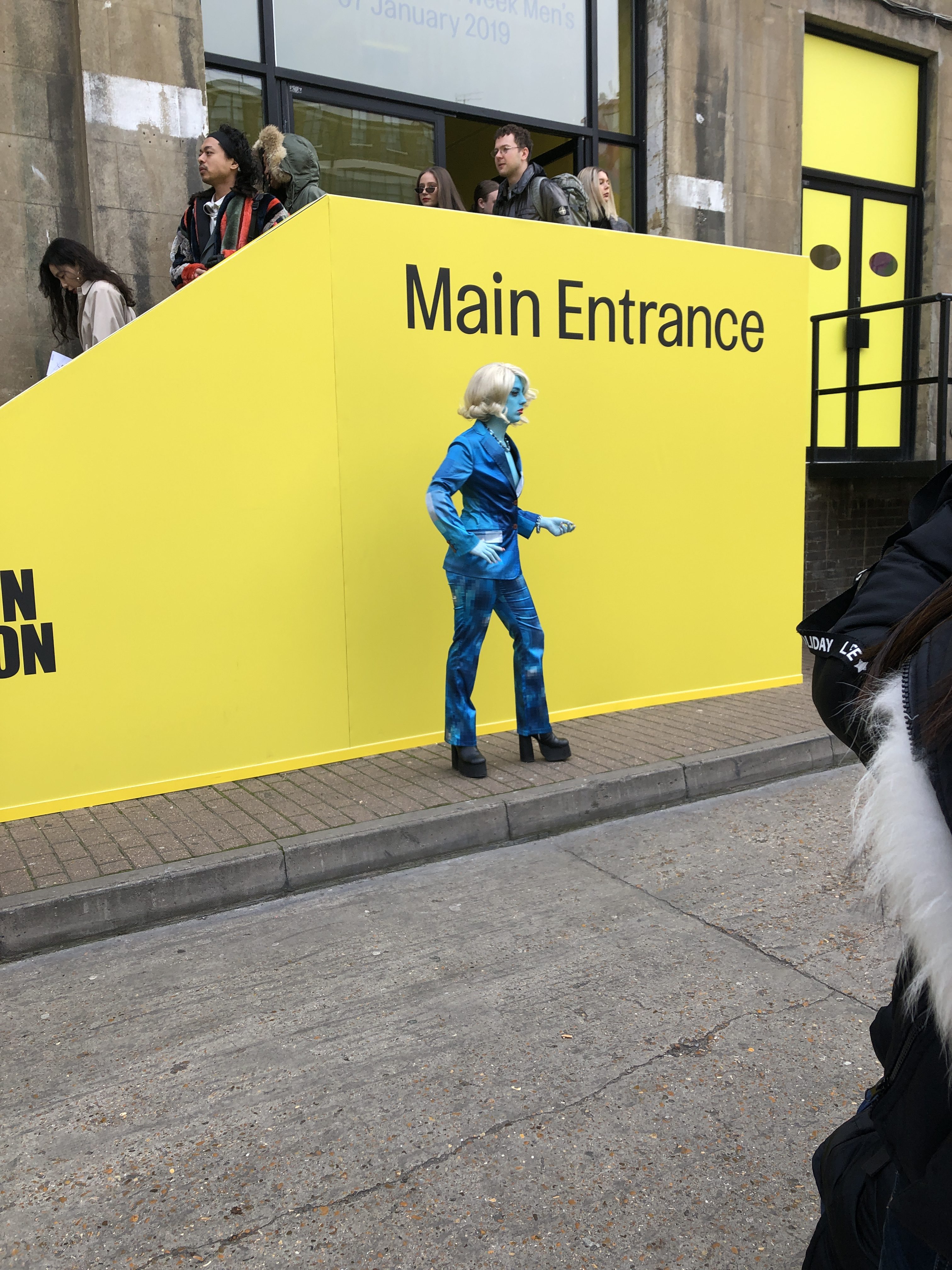 Not only that, but I had no clue what I was going to wear. 🤔 As I’m sure most of you who’ve followed my blog or my Instagram (@HarryJBartlett – shameless plug) for a while now, you’ll know that I’ve gotten fat. There’s no denying it, I’m not the skinny little 18-year-old bean that I once was. I’m now a gross 25-year-old with neck fat, a beer gut and a wardrobe of beautiful clothes that are now far too tight for me to get into.

But that didn’t keep me down, I’ve still got a whole heap of wearable clothes and ASOS Premier to get me some last minute clobber. I ordered myself this blue velvet oversized suit from ASOS and a white turtleneck to go with it and I was good for the day. 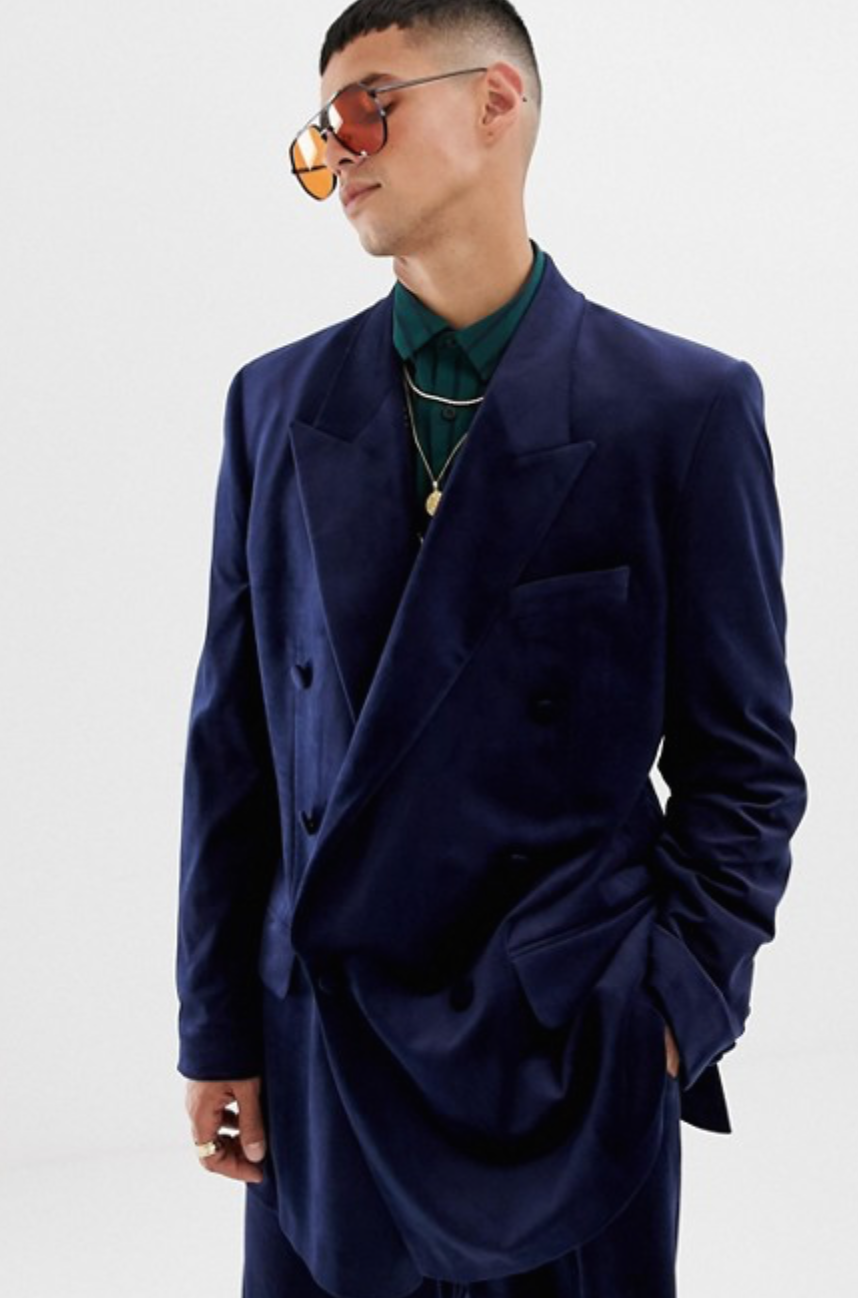 The rest of the clothes were things I already so it wasn’t too much of spending this season. I decided to revive the faithful cape that caused a stir on social media last year. 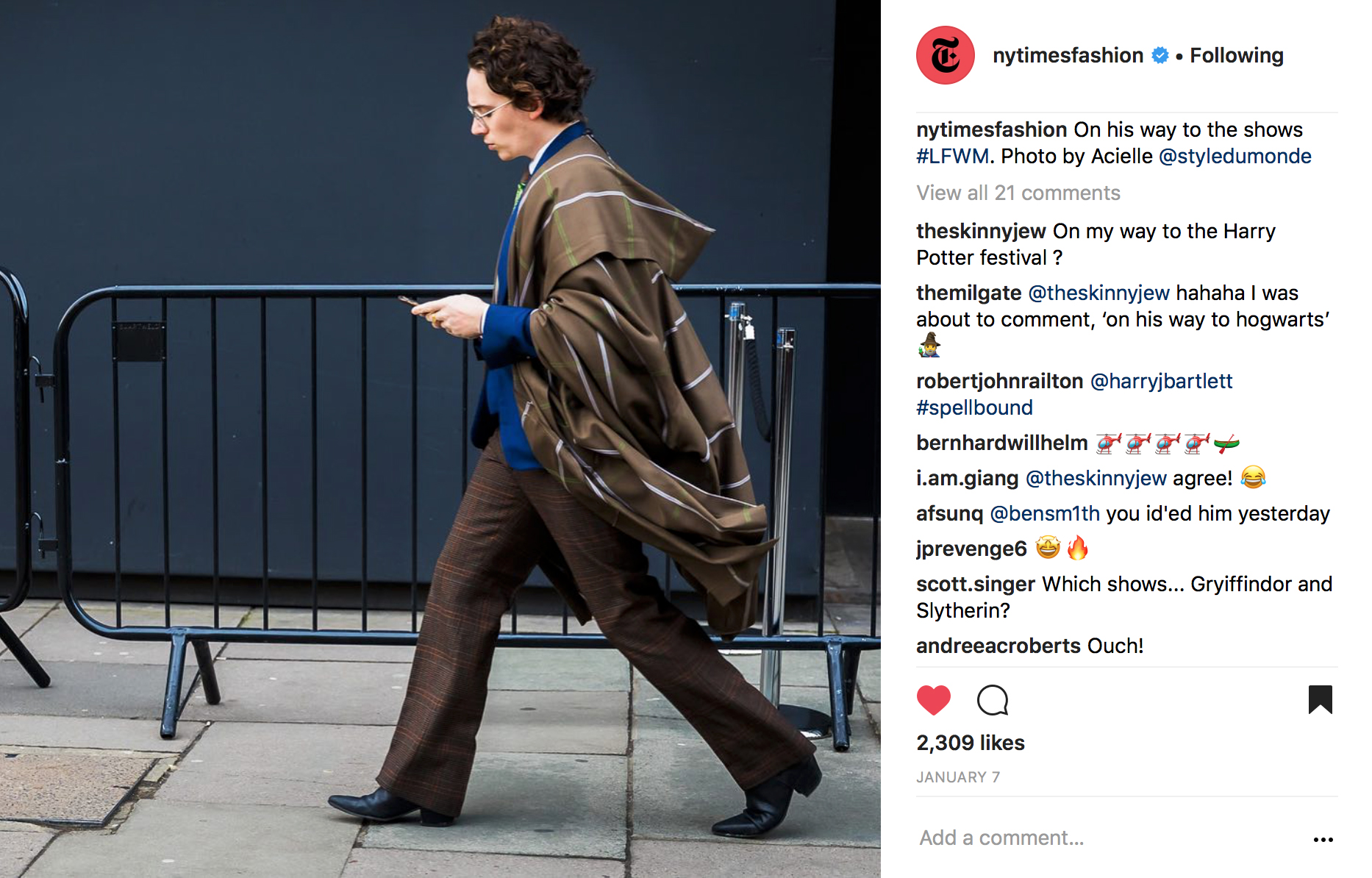 However, I now have the full Vivienne Westwood suit that goes with the cape so now I can really bring the party. I think I was serving you all some private school Victorian headmaster realness.

And my final outfit was much more casual (ish) as it was the only outfit that wasn’t a suit. I finally had a proper chance to wear my H&M x Moschino leather trousers and I must say, I’m really glad I bought them now. I also wore my blue leopard print Topman coat that I bought just before Christmas and people seemed to really like it which was nice. And I wore them with my favourite t-shirt I’ve ever bought, the tit top from Vivienne Westwood’s World’s End store. 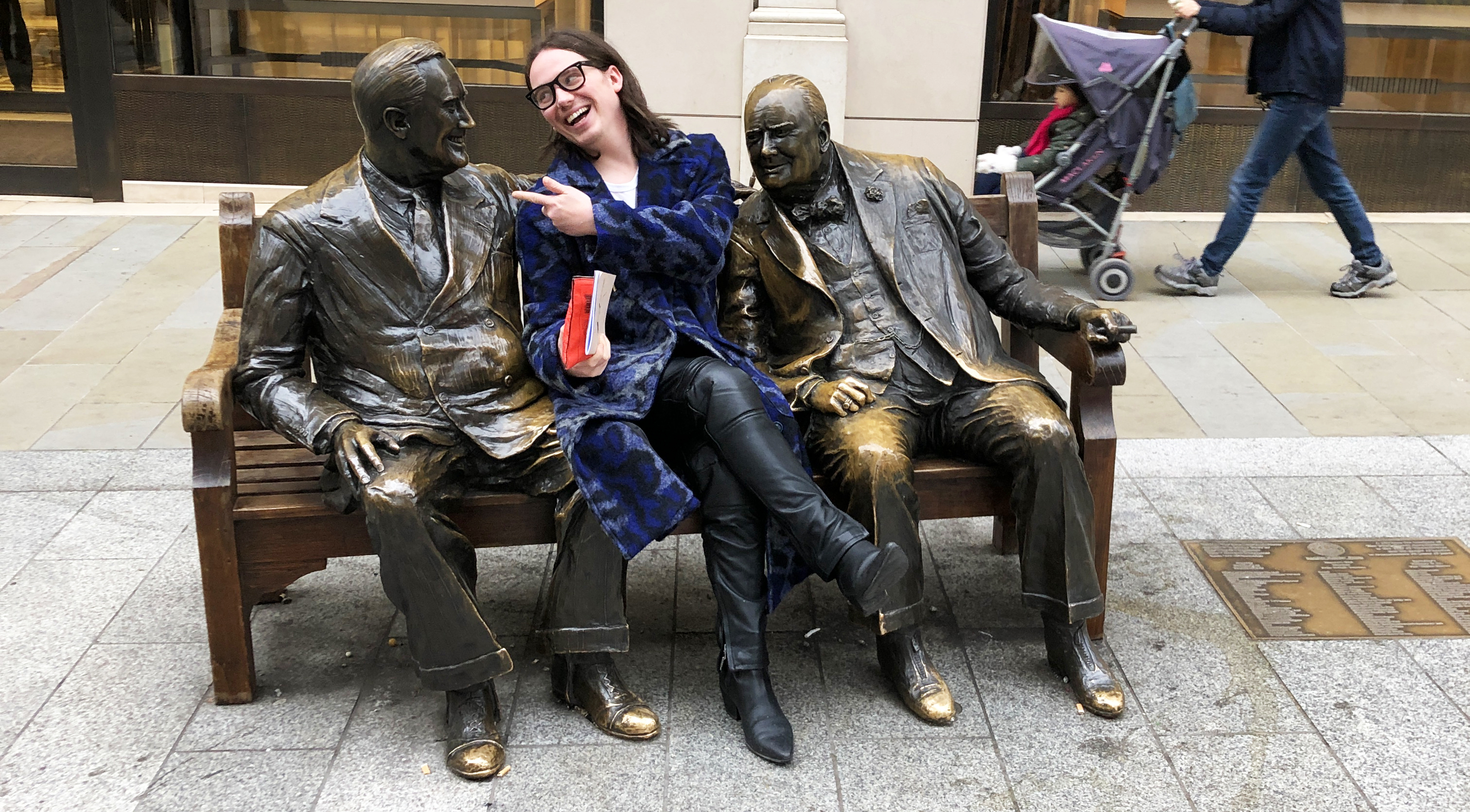 Anyway, I’ve droned about clothes enough, let’s talk about some shows that caught my attention. The first show I saw was Art School and I’ve been a huge fan of them for quite some time. However, it was 90% womenswear and to be honest, boys in dresses aren’t edgy or exciting for me anymore. I love it, but when that’s the narrative, I don’t care. Or you have to make the dress the most sensational thing in the world to catch my attention – no boys in Boohoo dresses… please.

I have to say, there was a substantial amount of womenswear (for a fashion week that has ‘Men’s’ in the title) this season compared to any I have seen before. Maybe this is due to the rumours that LFWM will soon be no more and it will rejoin the schedule of London Fashion Week, who knows. Either way, dresses were everywhere and it was hard to actually scope out many collections that were solely menswear.

Now, I’m all for a bit of camp, after all, it was the theme at this year’s Met Gala, but I would rather see effeminate clothing rather than actual women’s clothes at the LFWM. Here’s hoping the next season in June brings us a great mixture of fun-filled fashion!