After that double save last week (which was absolutely deserved), the queens know knew that the stakes had been raised and there most likely wouldn’t be another chance at a double save. With the competition hotting up, the queens know they can’t slip up at any point, don’t believe me? Just ask Plastique *spoiler*. But jokes aside, I really felt like Plastique was robbed this week – yes, she didn’t wear a facekini this week but she had a much stronger track record than Vanjie and I felt with both lipsyncs being on par, the track record should come into play as to who stays in the competition. As you can imagine, I’m quite annoyed by this week’s decision.

The episode starts with Silky going off on some tirade of how she’s talented and how she doesn’t need to change anything. I have no time for that. Silky’s arrogance has been bugging me for a while and I’m glad the other queens are calling her out on it. Nobody likes a Cocky Carol. 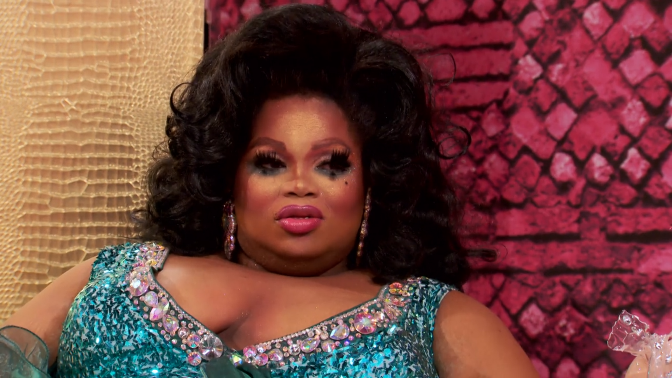 The Mini-Challenge: Reading Is Fundamental

I don’t often comment on Ru’s ‘boy’ clothes, but I really enjoyed this purple suit with the RuPaul’s Drag Con t-shirt underneath – lovely colours, good job. 👍🏻 However…

Without a shadow of a doubt, this had to be the worst reading challenge in the history of RuPaul’s Drag Race (and there have been some weak reads over the years).

Nina’s reads were awkward and judged by Ru, Vanjie and Silky just screamed, Brooke stole one of Mimi Imfurst’s best jokes (the Precious one, but Mimi’s was about Latrice Royale) and the queens kept heckling and shouting back. It was just a straight up mess. A bit harsh? Sue me. But I know I’m not wrong, it was an absolute shambles. They made Coco Montrese’s All Stars reads look like a real hoot!

But anyway, we somehow survived it so let’s carry on with the episode. Brooke won the mini-challenge which seemed fair enough.

This week the queens had to work in pairs in an improv acting challenge inspired by Cops called L.A.D.P. (Los Angeles Drag Police). As Brooke won the reading challenge, she got to pick her teammate then allocated which queens would work together. 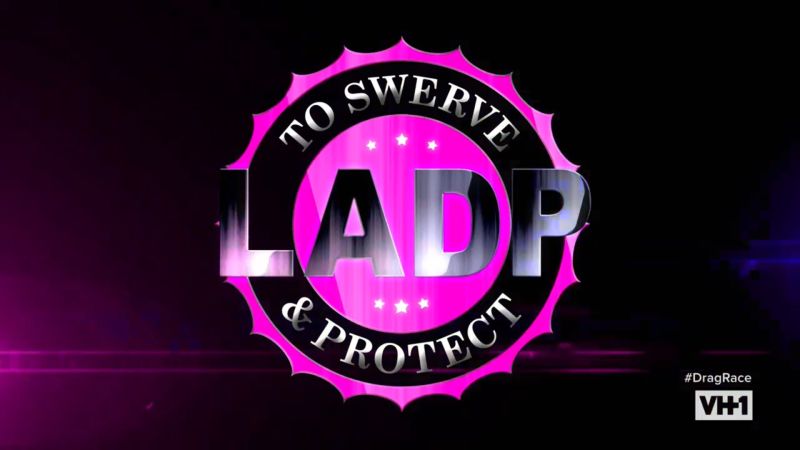 Brooke didn’t pick her bae, Vanjie, and for some reason people were shocked! Why would she? Her critiques have always been that Vanjie sounds the same and just shouts and doesn’t really act?

So Brooke made the clever decision of picking Nina West as her scene partner. She paired Vanjie and Plastique up, Silky and Shuga and Yvie and A’Keria. The only person I worry for is Shuga as Silky isn’t what we would call a ‘considerate scene partner’.

But if all the queens are spatting duos, who will be the L.A.D.P.? It’s this week’s guest judges – Cheyenne Jackson and Fortune Feimster (a great casting choice if you ask me). 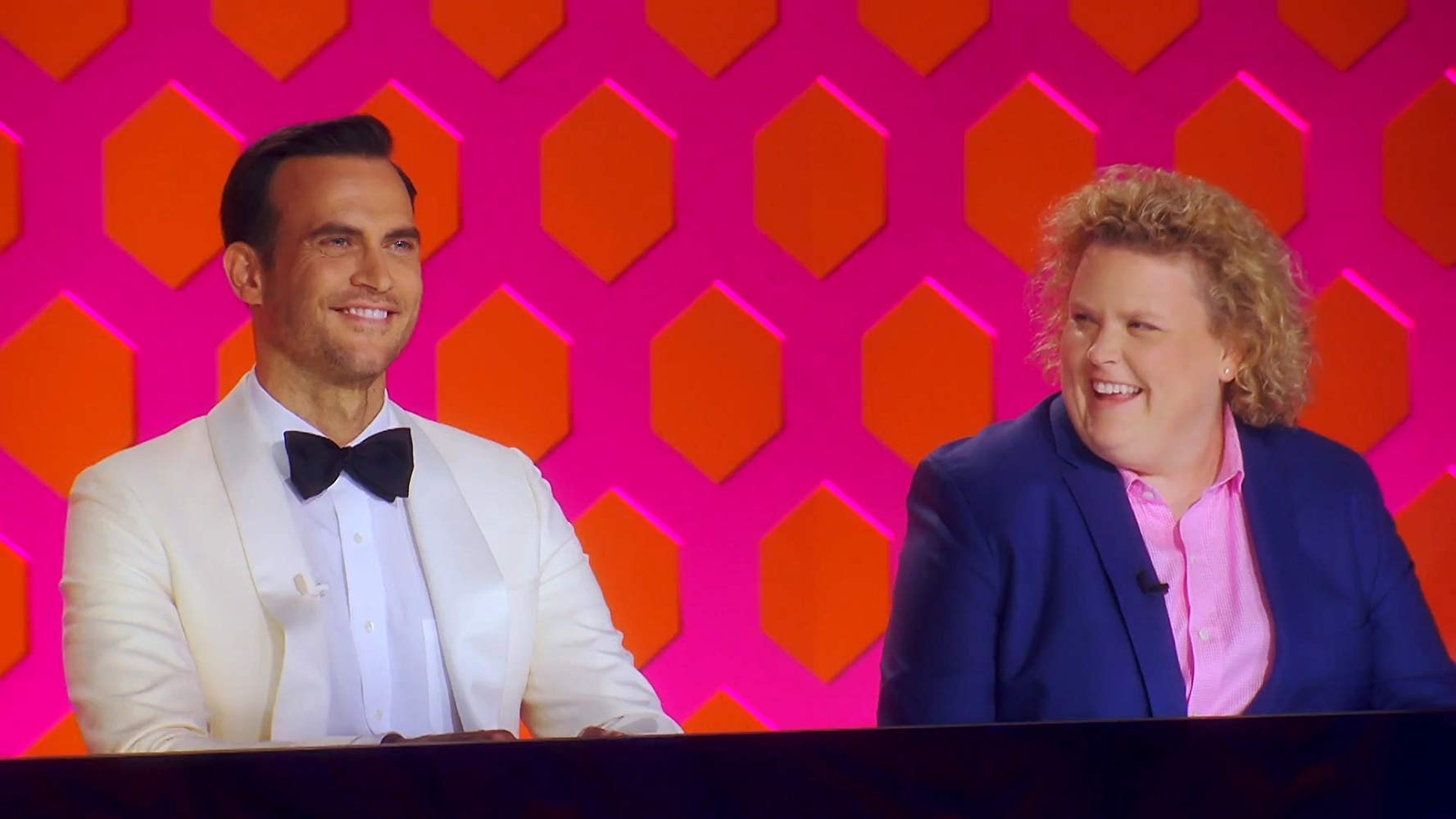 On with the challenge!

These two were the first to perform and their storyline was that Silky was selling Bogus Butt Pads.

I think these both did an alright job. Silky, of course, played Silky. She was loud, in your face, hard to hear with her diction but overall she stole the show and she was funny so I can’t fault her there. 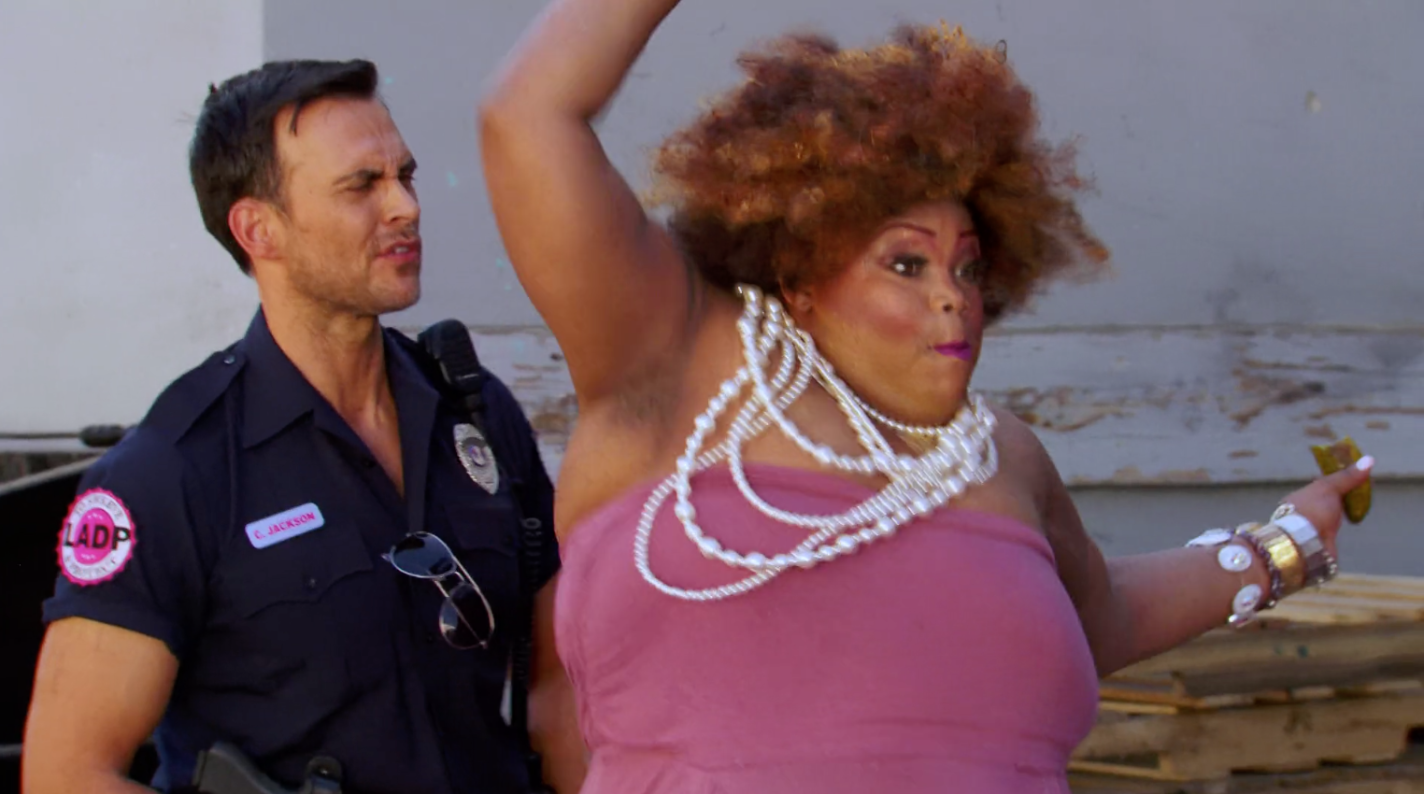 Shuga, sadly, didn’t match up to her scene partner, she wasn’t terrible but she wasn’t a ‘star’ in this challenge. 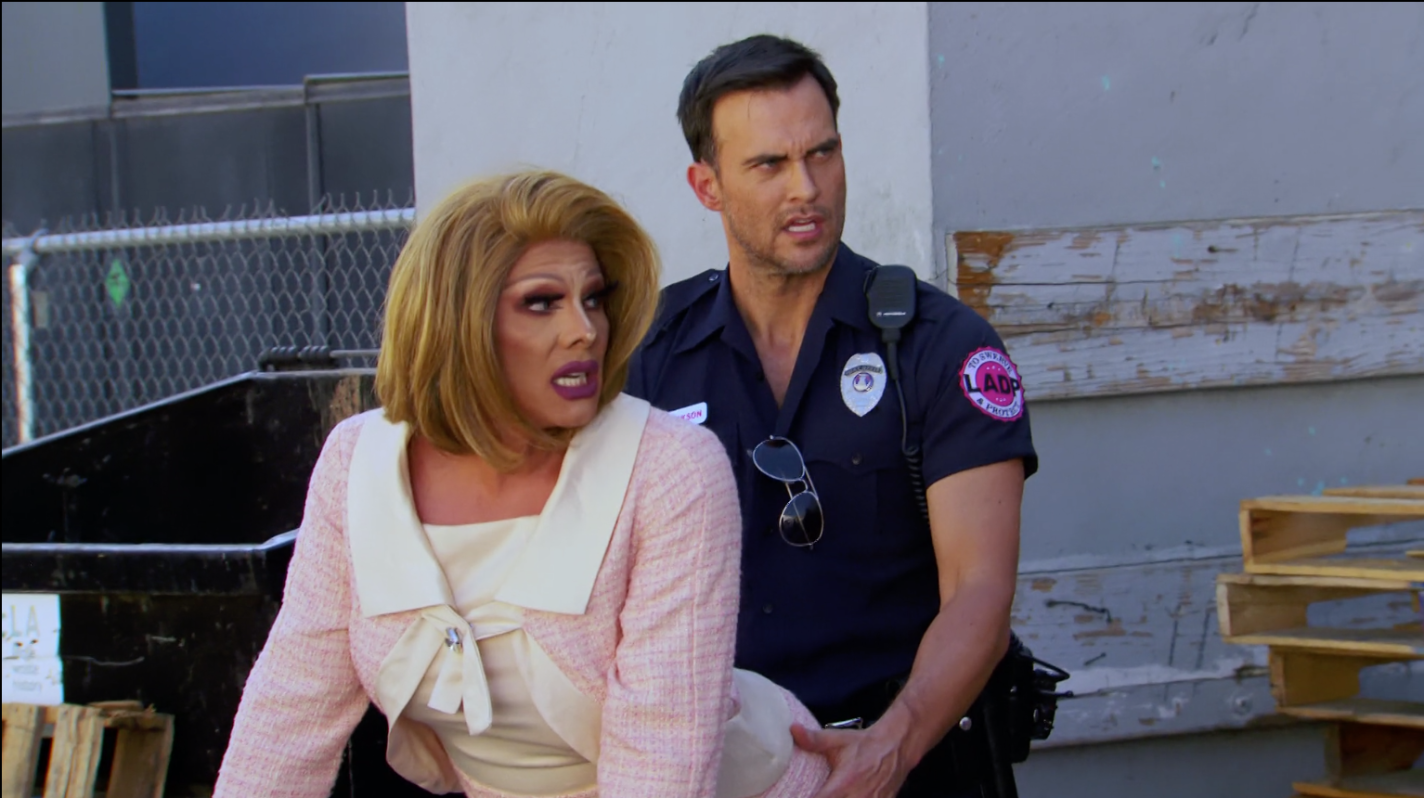 These two had to dispute a nudist trespassing on their property. Nina, being a confident comedian, thought it would be a good idea to play the nudist as the judges wouldn’t expect her to be so exposed – a great idea I thought. However, Brooke didn’t feel confident so Nina made a last-minute decision to swap roles after basically planning the whole scene.

Brooke did a pretty good job pretending to be a hippy vegan nudist. I also think Nina did a great job as the prudish southern neighbour. However, Brooke certainly stole the performance by doing splits, dancing and bending. 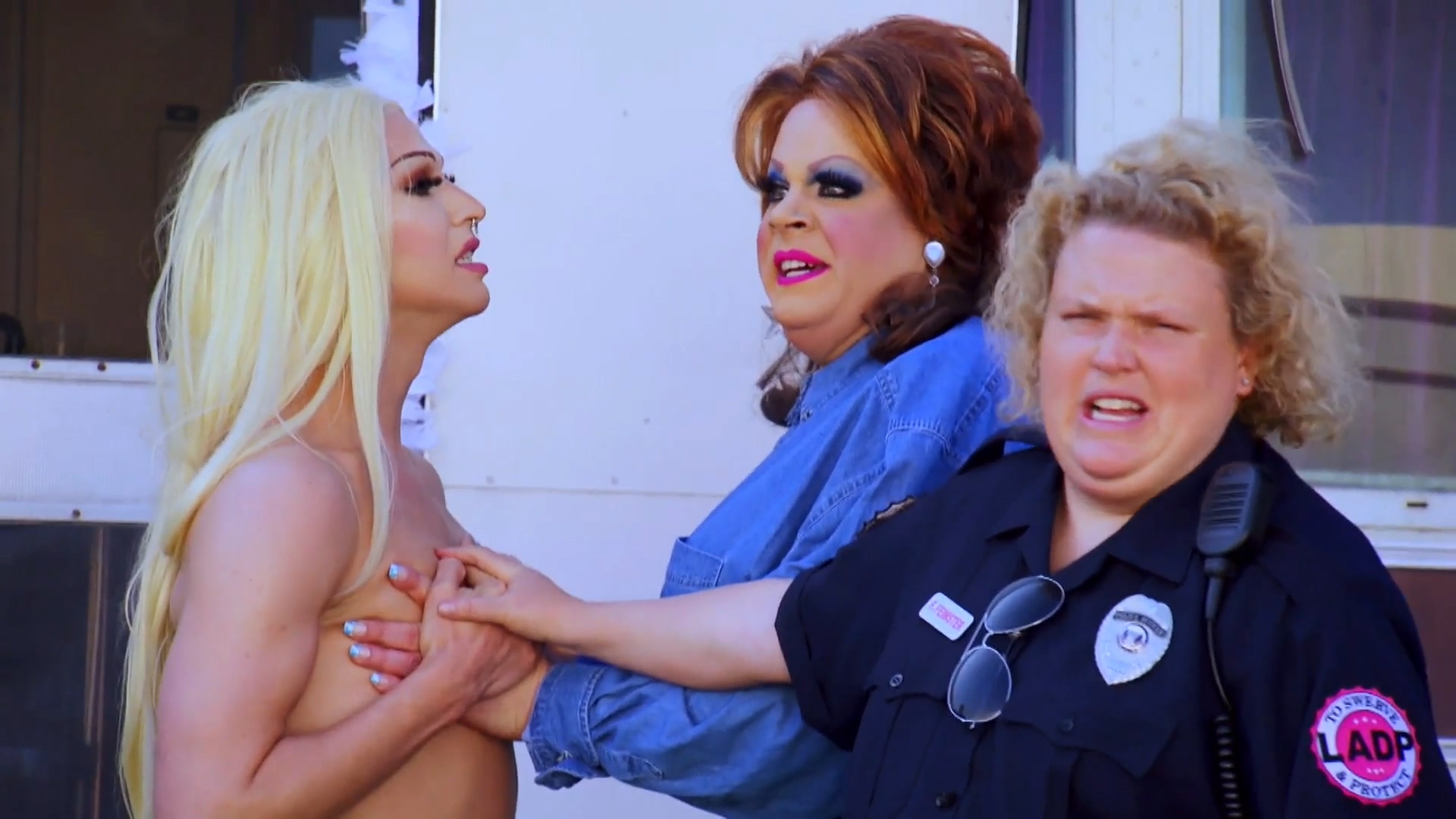 But I have to give Nina props, her character was so believable and hilarious, I just wish she had more scene time.

These two had to be two ‘twerking girls’ who were in dispute over who’s corner they were working on. You can’t go wrong with a trashy turf war and these two did a great job.

Yvie gave a great performance as a mucky mare who wasn’t going to back down for anybody. She was funny, had a great character and made me laugh.

But it was A’Keria who stole the show with her angry hussy performance. She twerked to her heart’s content. Got down and dirty with the drama and even tried to scale a fence to avoid capture. 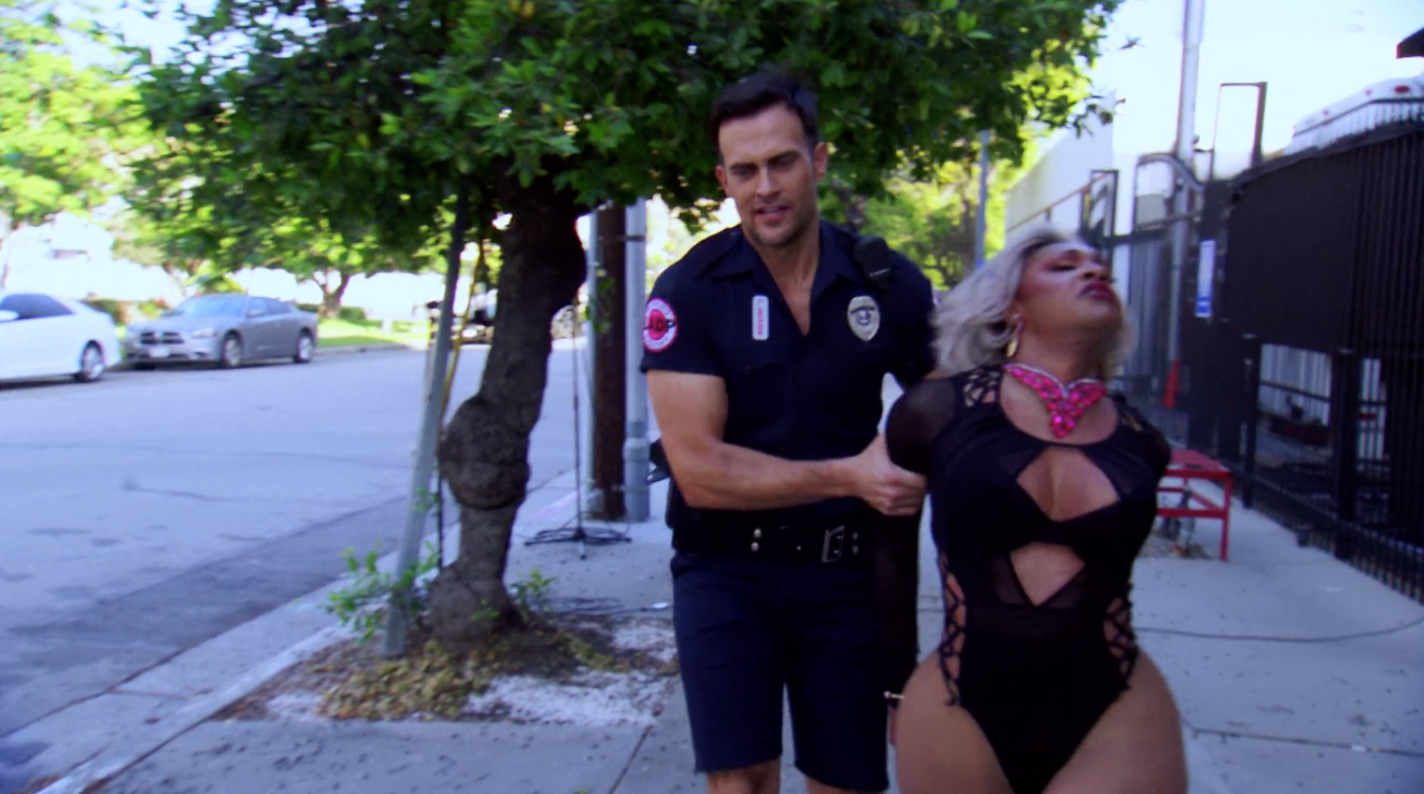 These two queens certainly gave it their all.

These kitty girls were having a (literal) catfight at the liquor store. Without a shadow of a doubt,  these two were shit. 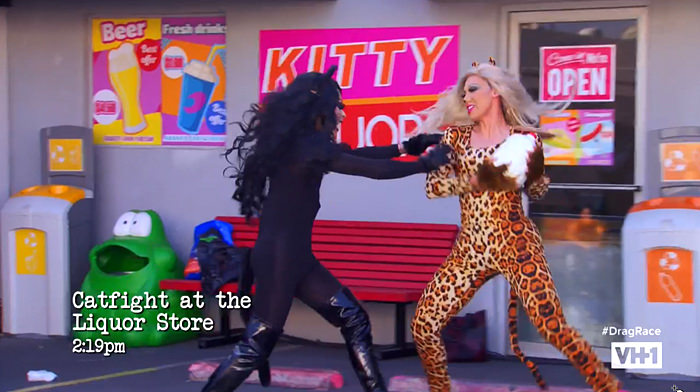 It was like watching a high school drama performance where nobody rehearsed so they just do a messy fight scene in the hopes that nobody will notice. There was a lot of screaming, no plot development, no real story and Plastique managed to slip in her ‘old faithful’ Asian stereotype voice. 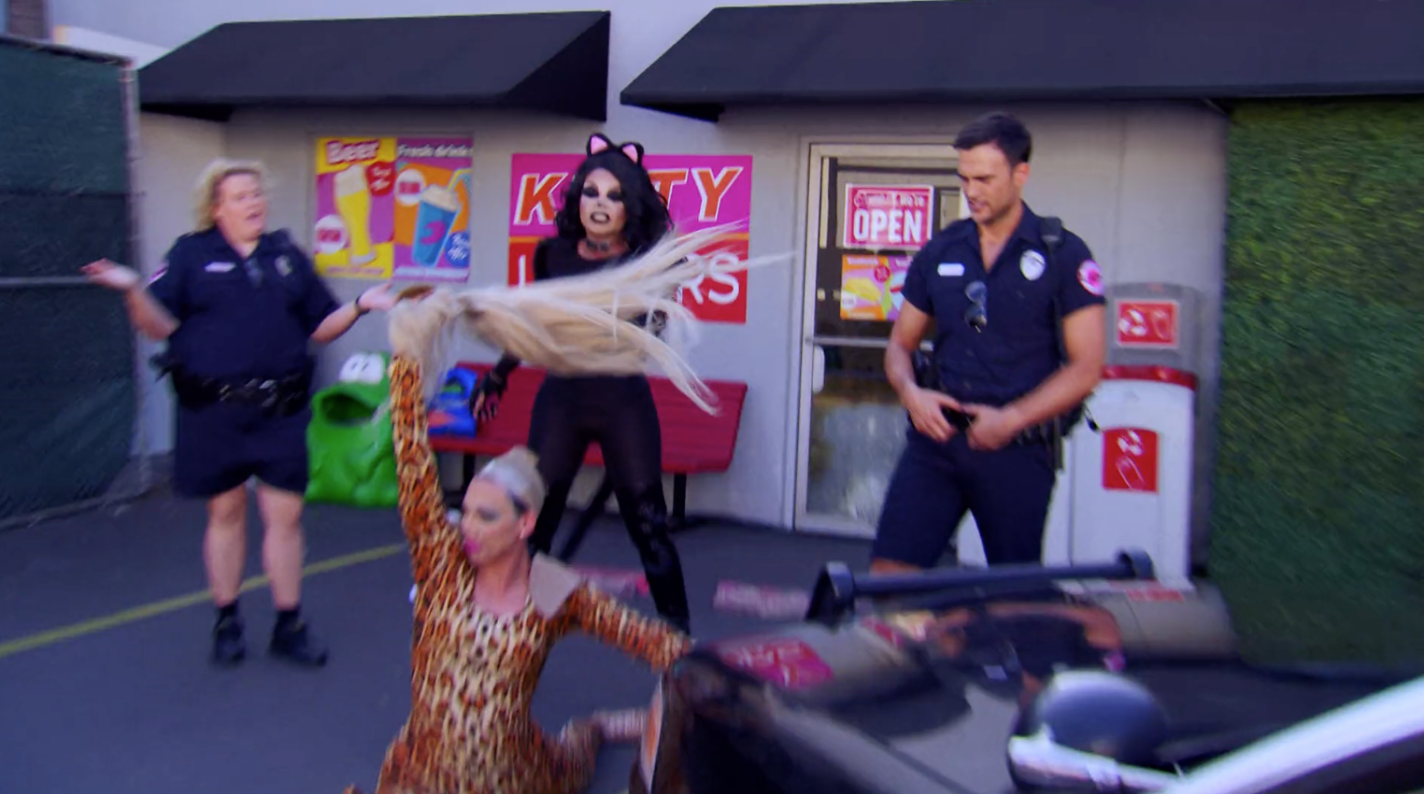 It was very clear that these two would be in the bottom this week. But enough about the challenge, on to the runway!

Category is: Facekini – Toot or Boot

This week the queens had to rock looks “inspired” by Ru’s facekini look from last season. You know, the one where he wore a motorbike visor over a pair of tights because he had the flu or something. Well yeah, that got is now a theme and I’m not mad about it because I love when the queens have to try something new.

But in my eyes, there was only ever one iconic facekini that should have been credited and that was Olga (A.K.A. Katya): 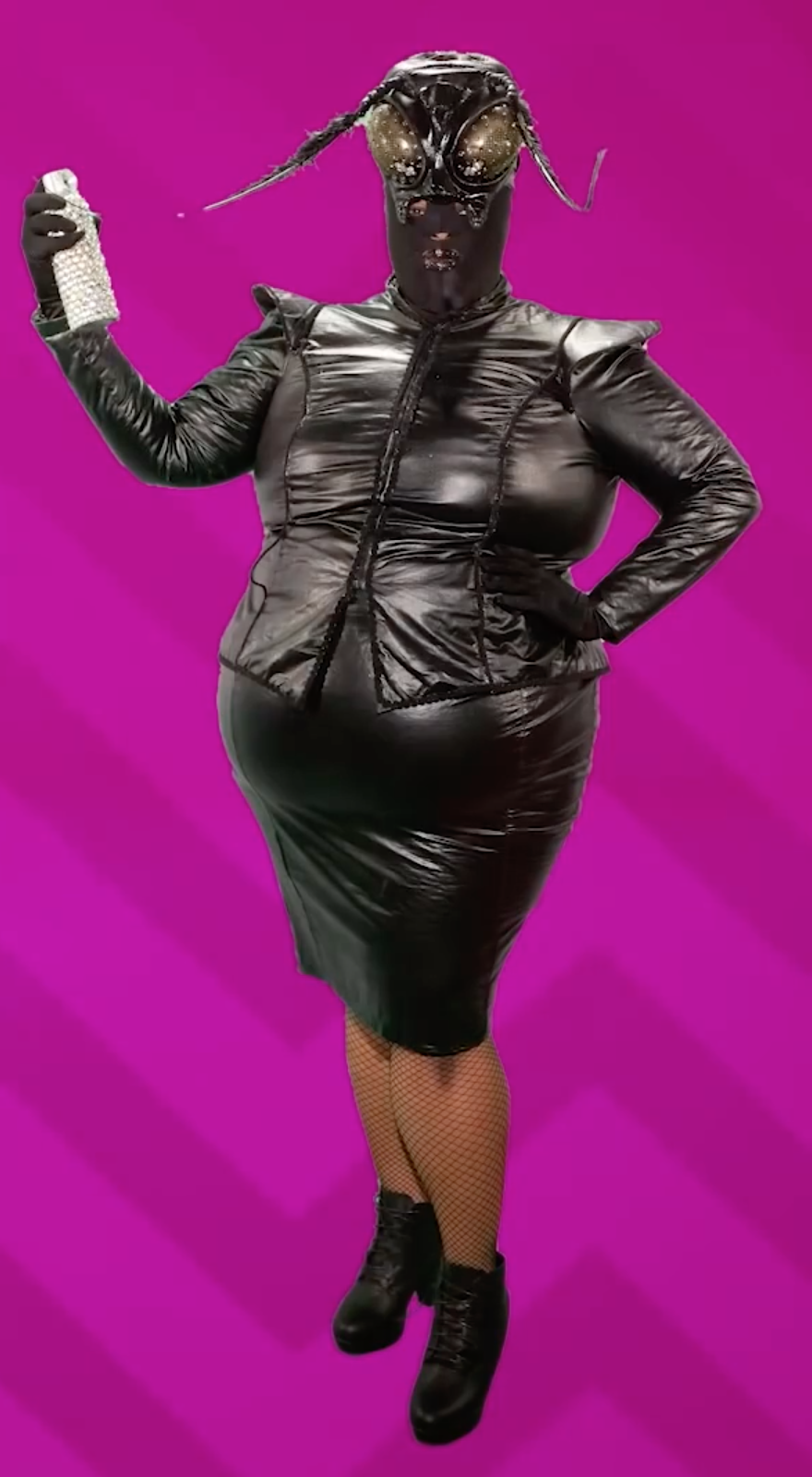 This was diabolically bad. It was the laziest attempt at a facekini – all she did was paint her lips black and that for me was a piss-take. And I’m not the only one that felt that way, all the queens seemed to feel that Silky had no passion or pride in her work on the show with this outfit. Not only that but it was supposed to be a fly yet she had no wings – I thought she was a cockroach. 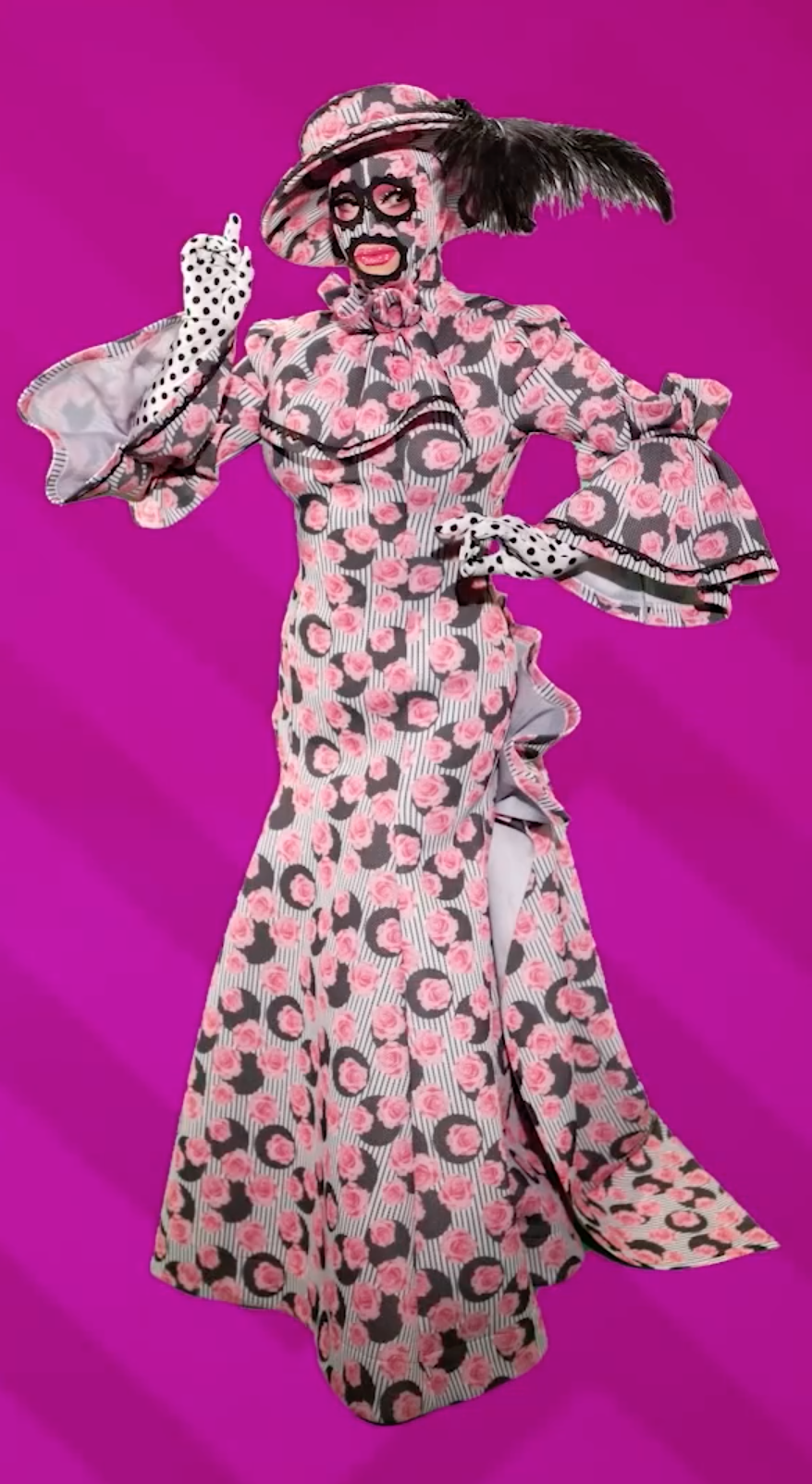 This! This is how you do a facekini! Slay bitch slay! Shuga Cain is so underrated in this competition. Honestly, this is one of my favourite ever looks on the show. It fit her beautifully, the dress and hat were stunning, the pattern was elegant and camp and she bothered to do some beautiful eye makeup underneath the facekini – a true professional! 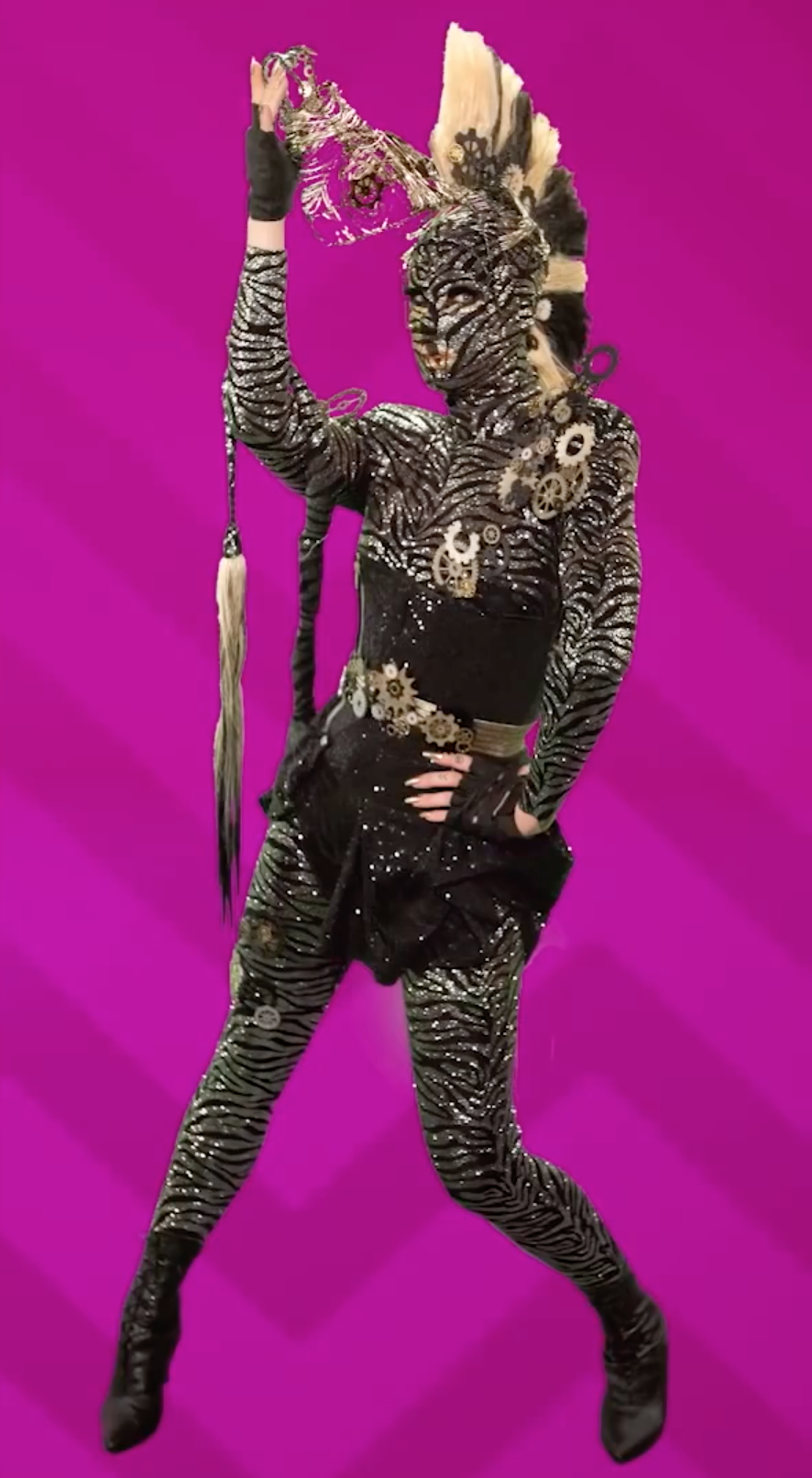 I wasn’t mad keen on this. The wire horse head was a cool idea but I found the print too dark and busy and I’m not keen on the steampunk aesthetic. There’s nothing much more than that for me.

NAILED IT! 👏🏻 Nina West at her Nina Best! This suit is campy, comic and creative. The spots and the matching hat, the little red moustache, the white suit with red piping, it’s all perfect.

Sloppy, the pants don’t fit right, it looks like the top doesn’t match properly, the rubber hairpiece looks limp (compared to Latrice’s All Stars latex look) and the stilettos didn’t go – they should have at least been hooker boots.

A surgery outfit on a drag queen… groundbreaking. Yes, nearly every queen has done a surgery/botched-botox/nip-tuck costume at some point in their career. But I must say I think A’Keria did a good job with this one as it gave me a blowup doll feel with the facekini. Not the most exciting but well executed.

Yvie gave us some sort of swamp monster this week and I kind of love it. The glittery mouthpiece made her face look strange, the red eyeshadow and white eyeballs looked extra spooky in this lagoon-based horror show and the neon wig was a delightful touch.

She looks pretty but this isn’t really a facekini, it’s more of a Catwoman costume. She looked good, I can’t deny that but it wasn’t a proper facekini.

A’Keria was the winner of this week’s challenge and I thought she did a great job. Of course, Vanjie and Plastique were in the lipsync.

Vanjie and Plastique both ended up in the lipsync (and rightly so for their terrible teamwork). In the end, Plastique was sent home which annoyed me. 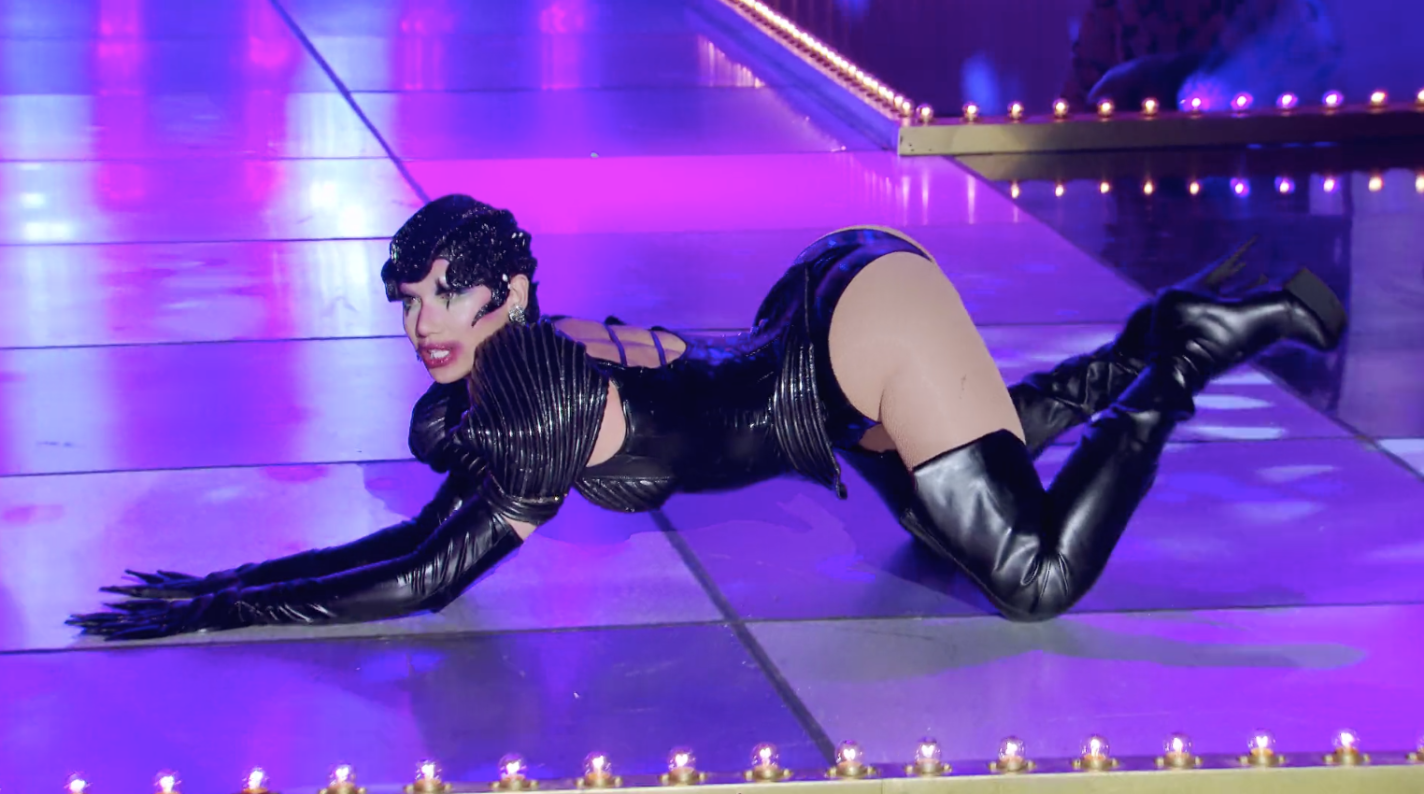 Plastique was consistently high throughout the competition and Vanjie has been constantly in the bottom. Both lipsync performances were kind of ‘meh’ so it would have made sense to have kept Plastique in the competition. Boo hiss boo RuPaul.

I don’t know about yoiu, but it seems RuPaul has made it very obvious what queens he wants in the final. I think Silky and Vanjie have been called out for their looks too many times but they’ve constantly been saved or spared from the chop.

This week, I gained 4 points which took my total to 56 points and Tom got 6 points which brings him to 52 points. Vanjie drops down to 8 points.

Not gonna lie, I was really proud of this sign I m