Before I get into the episode I’m going to start off with a *SPOILER* for this episode. You’ve all seen how it ends and I think it was a joke. Shuga 👏🏻 was 👏🏻 robbed 👏🏻 ! It was obvious that the show wanted to get rid of Shuga as they didn’t see her as finale material but I thought Silky or Yvie should have been in the lipsync.

Am I wrong? Well, you know the answer to that. The decision was a farce. But hey, Vanjie’s skirted by in her bathing suits all season and Silky has just played herself in every acting challenge so I can’t say I was surprised.

The episode started with Brooke bragging about her win and how happy she was to have nailed her character… with no mention of Nina who literally mothered her through the challenge – even swapping her role at the last minute to make Brooke feel at ease. 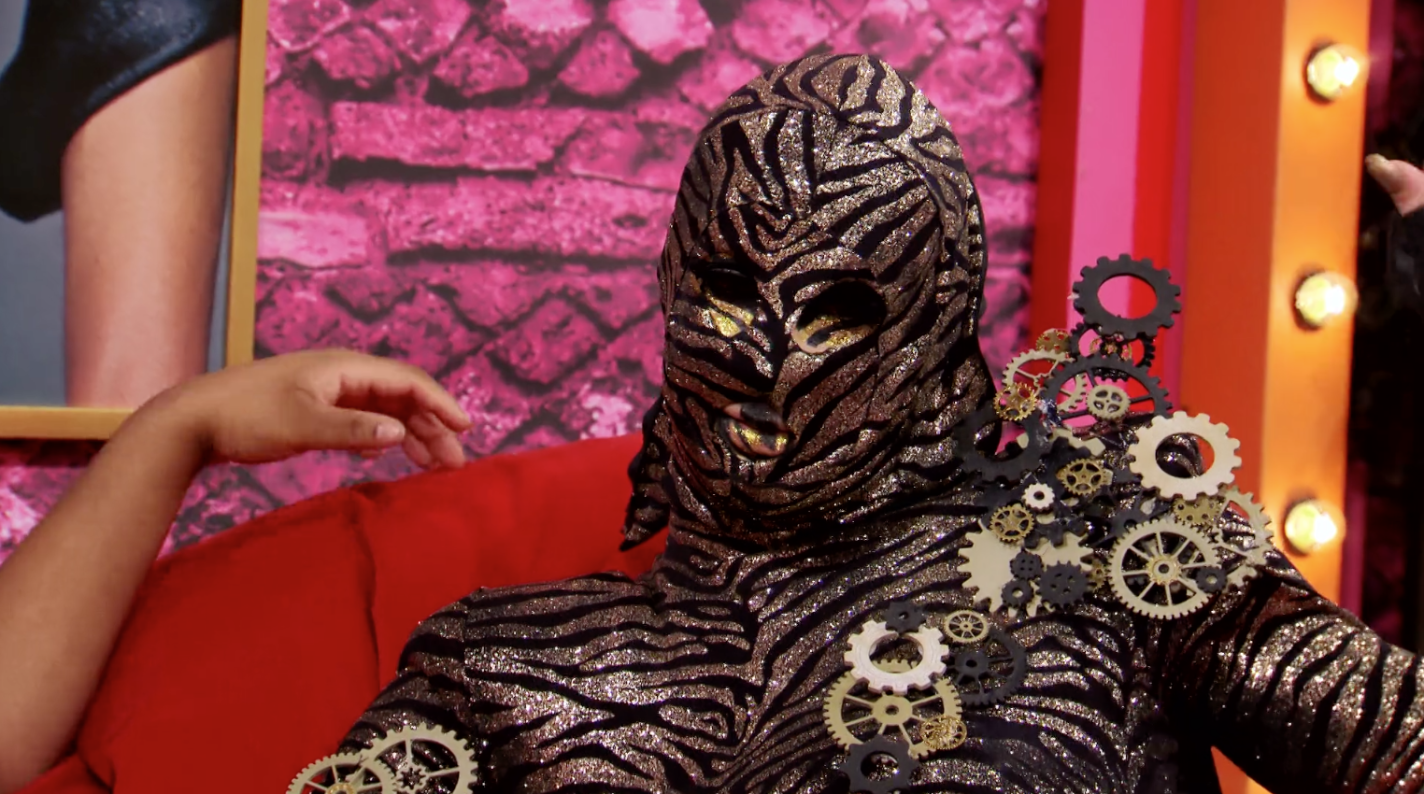 Poor Nina, she can’t catch a break with these comedy acting challenges. First she was robbed of a Snatch Game win and now this! 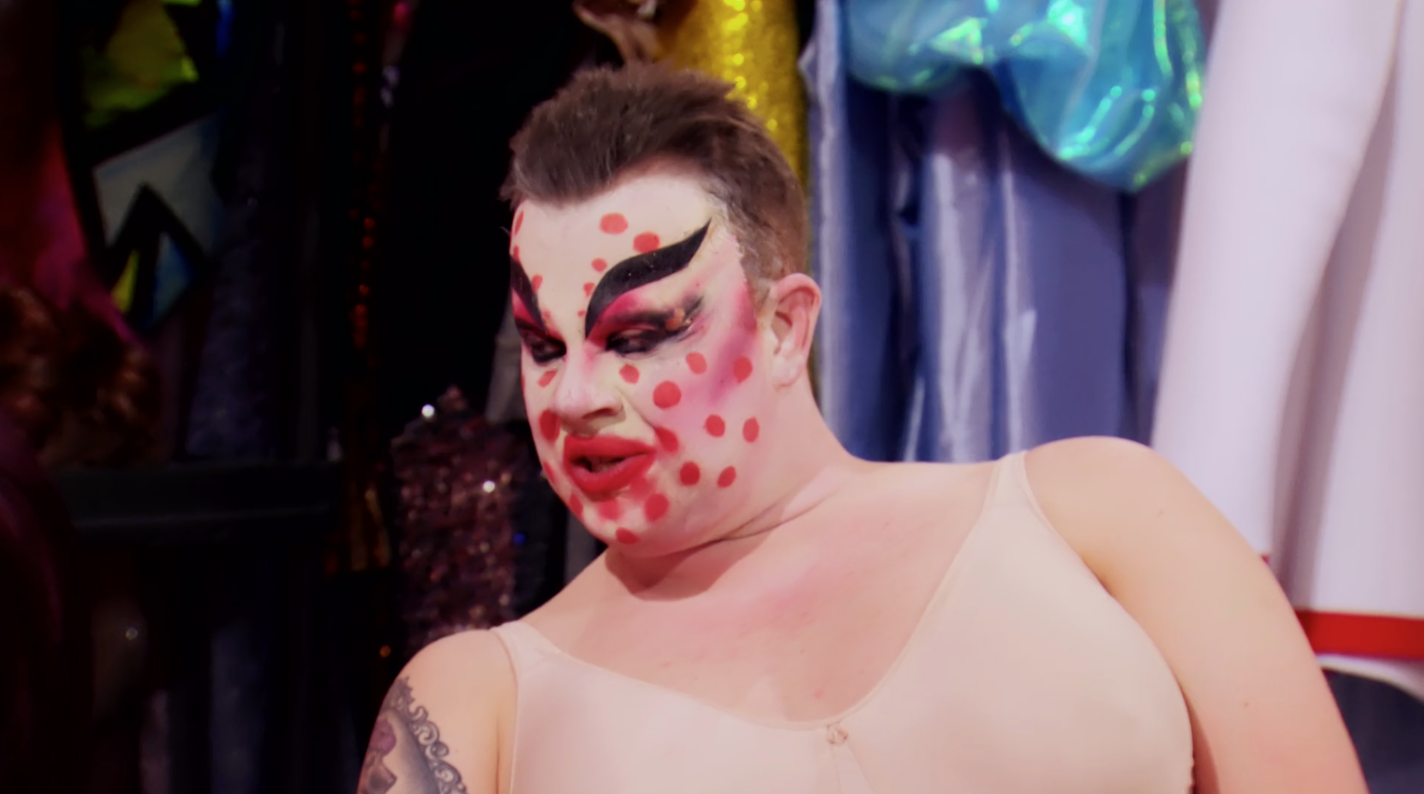 But enough about that, on to the mini challenge and this one was a strange one (not like the others weren’t).

This week, Ru invited a legendary guest to the werkroom to help with the mini challenge. And it was none other than the wig-wonder herself, Delta Work! 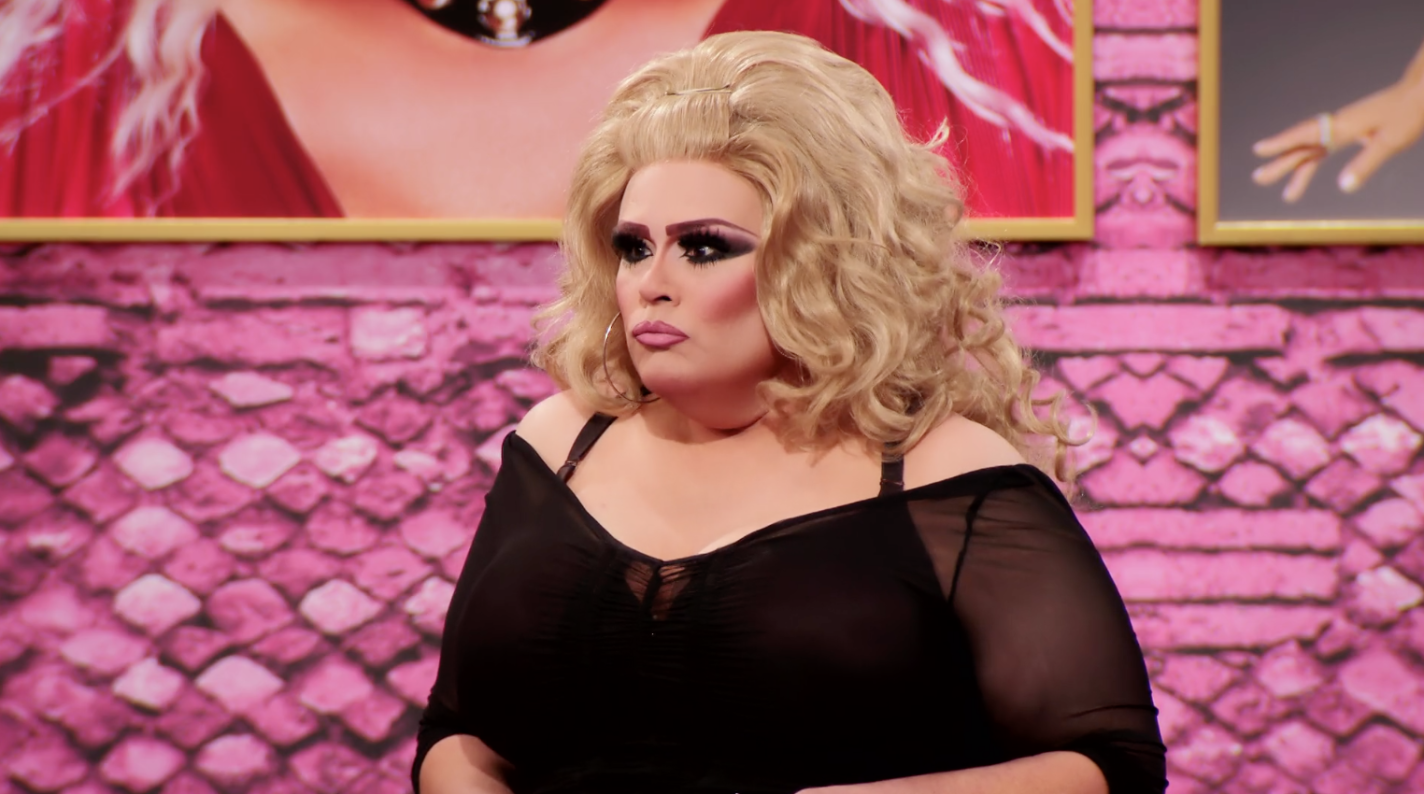 This season 3 alum and Ru’s wig stylist has been one of my favourite queens of all time. I would love to see her on All Stars, but now she’s working for Mama Ru, I don’t think it’ll be happening anytime soon. Still, we got to see her back on our screens and that was a treat in itself.

Anyway, this week’s challenge is called ‘Balls to the Wall‘ and it’s as much of a thirst trap as it sounds. 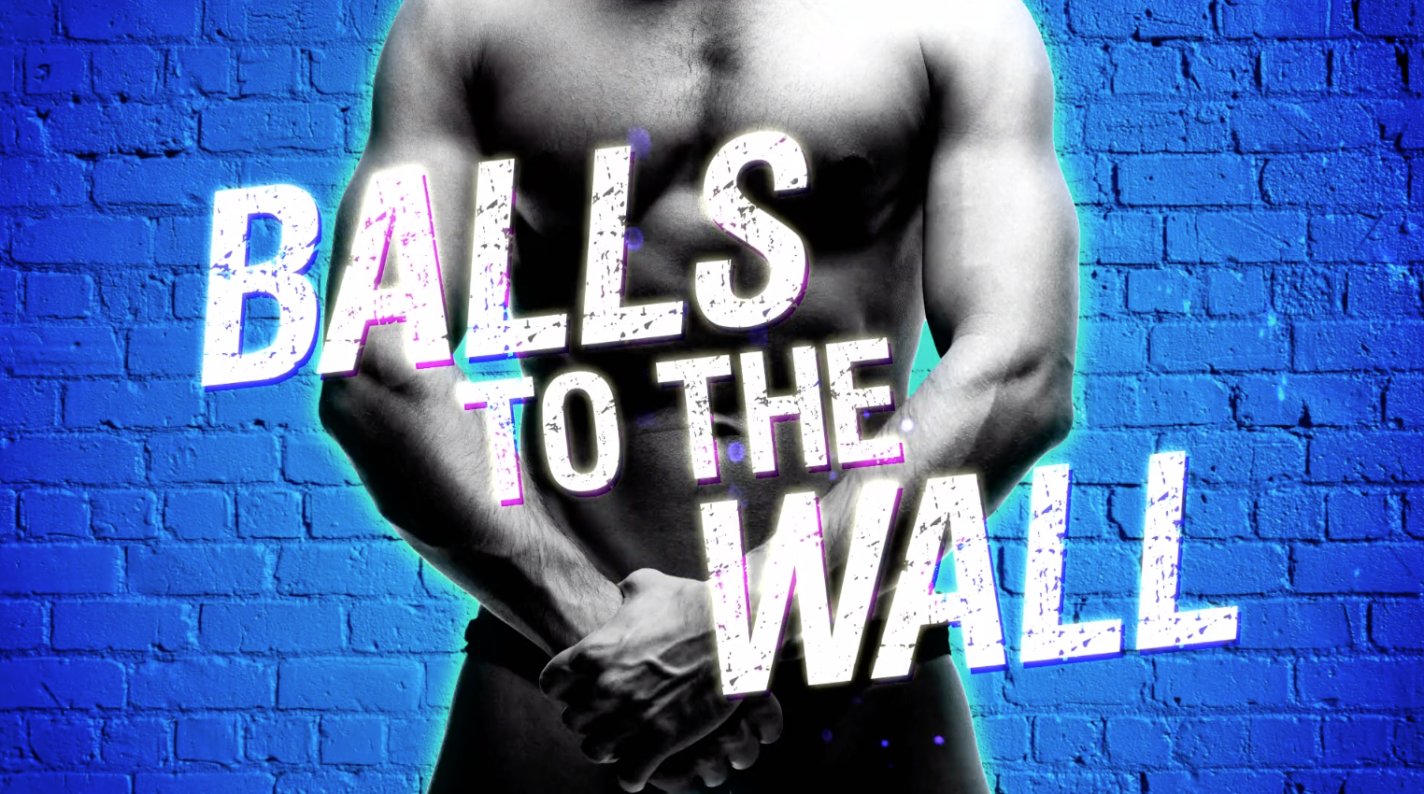 The queens had to play a speed game of getting a ball in a bucket with help from the oh-so-sexy pit crew. They had to join at various body parts without dropping the ball to earn points. 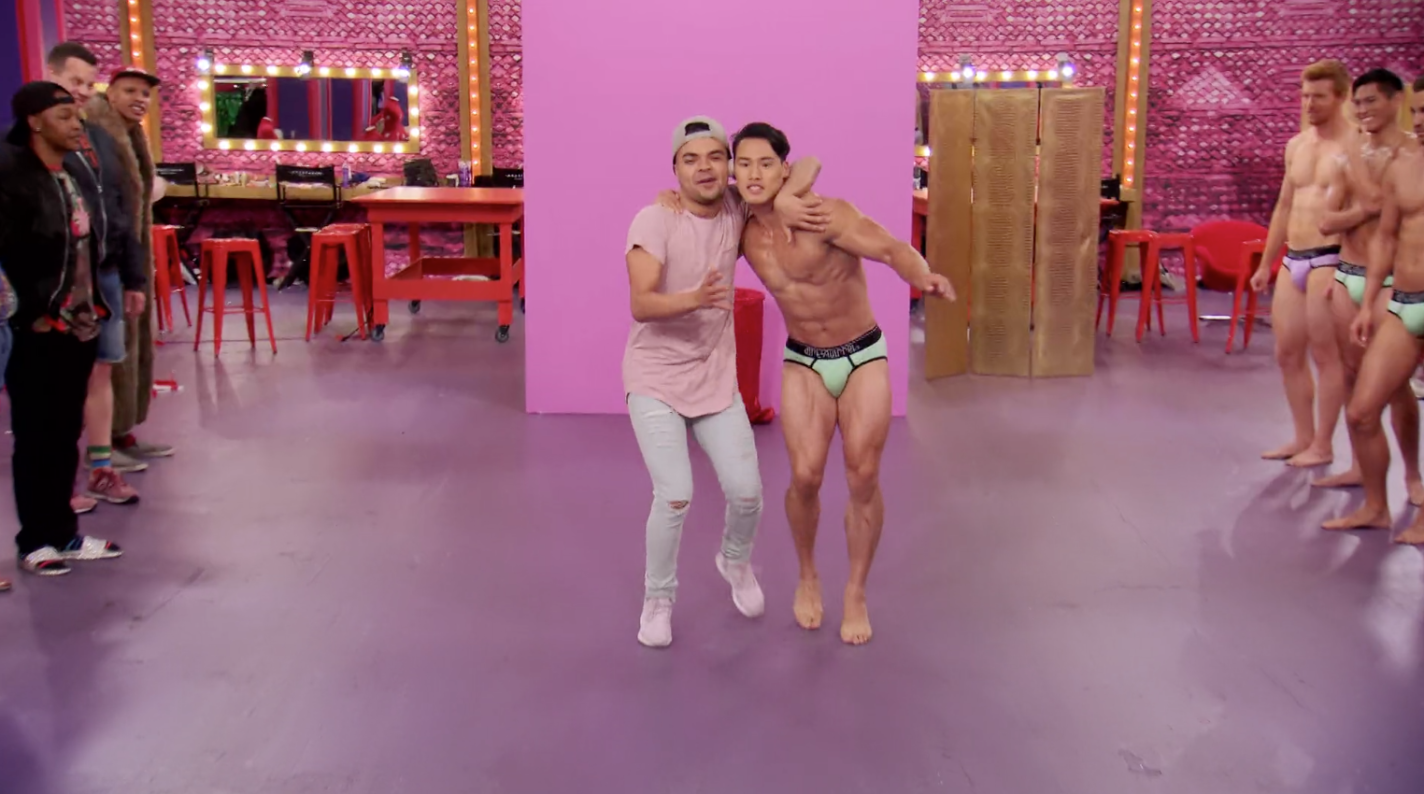 In the end, Vanjie was victorious and she got to choose the teams for this week’s maxi challenge. 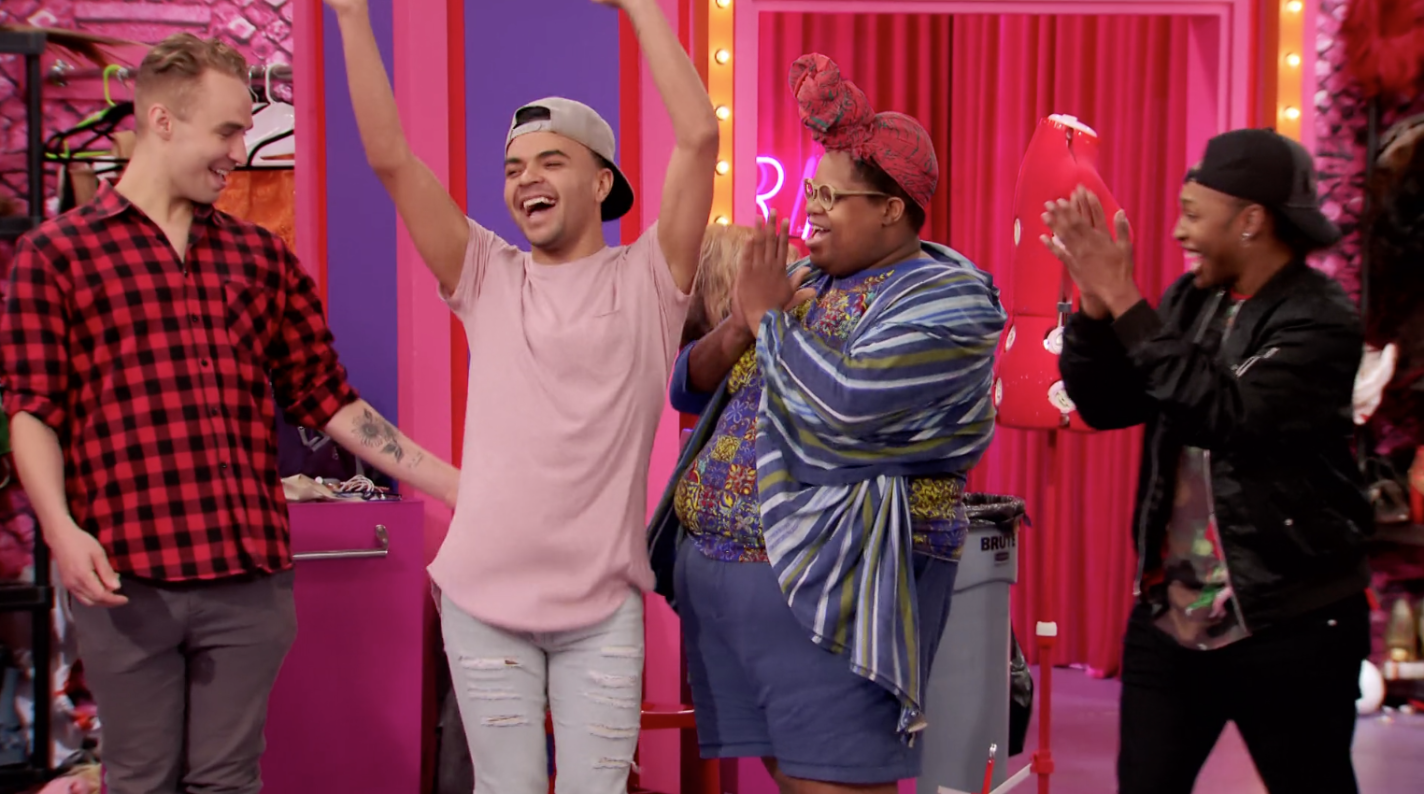 This week, the queens would be stepping into the spotlight as the stars of their own magic show! This is something we’ve never seen on Drag Race before so I was really excited by this challenge. They’re going to have to master sleight of hand, comedy and crowd interactions to give the audience the best ‘Dragic Show’ possible.

As the winner of the mini-challenge, Vanjie got to choose the teams. She chose to work with A’Keria, Yvie and Silky as “team personality” which they lovingly dubbed as ‘Black Girl Magic’ and she put Brooke, Nina and Shuga together. They called themselves ‘The Mighty Tucks’. Is Vanjie still a little bitter than Brooke didn’t choose to work with her last week?

Of course, before they could put on their shows, the queens had to get a boot camp training in the art of magic. Thankfully, magician Kyle Marlett was on hand to share his trade secrets. 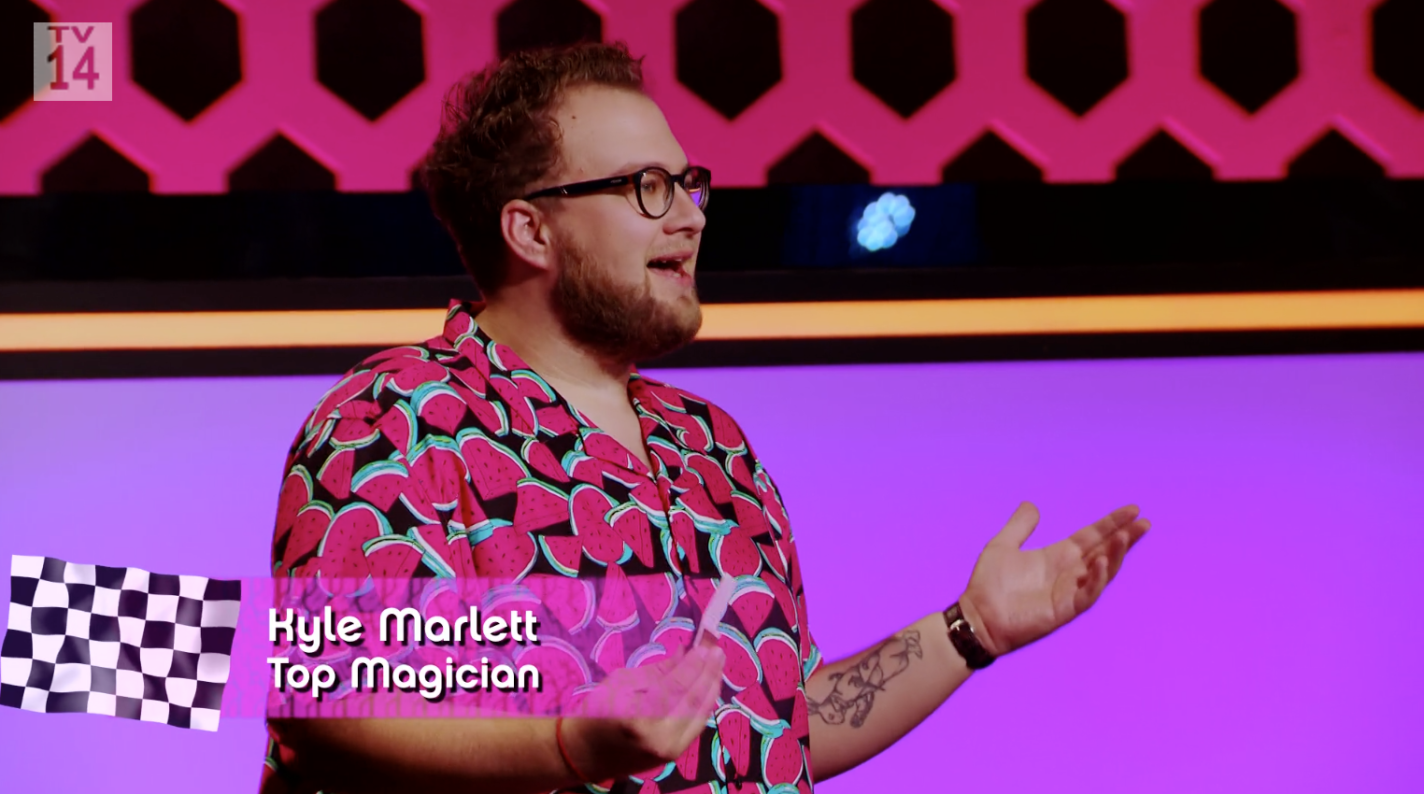 The queens were all given random magic tricks to work on but it seems that Brooke was getting pretty hot-headed with her trick. So much so that her trick changed by the time the live performance happened and it was never mentioned again that it changed… spooky. Anyway, let’s have a gander at the first team.

The queens started out strong, they had some great gags and as soon as Nina burst onto the stage, we knew it was go-time! 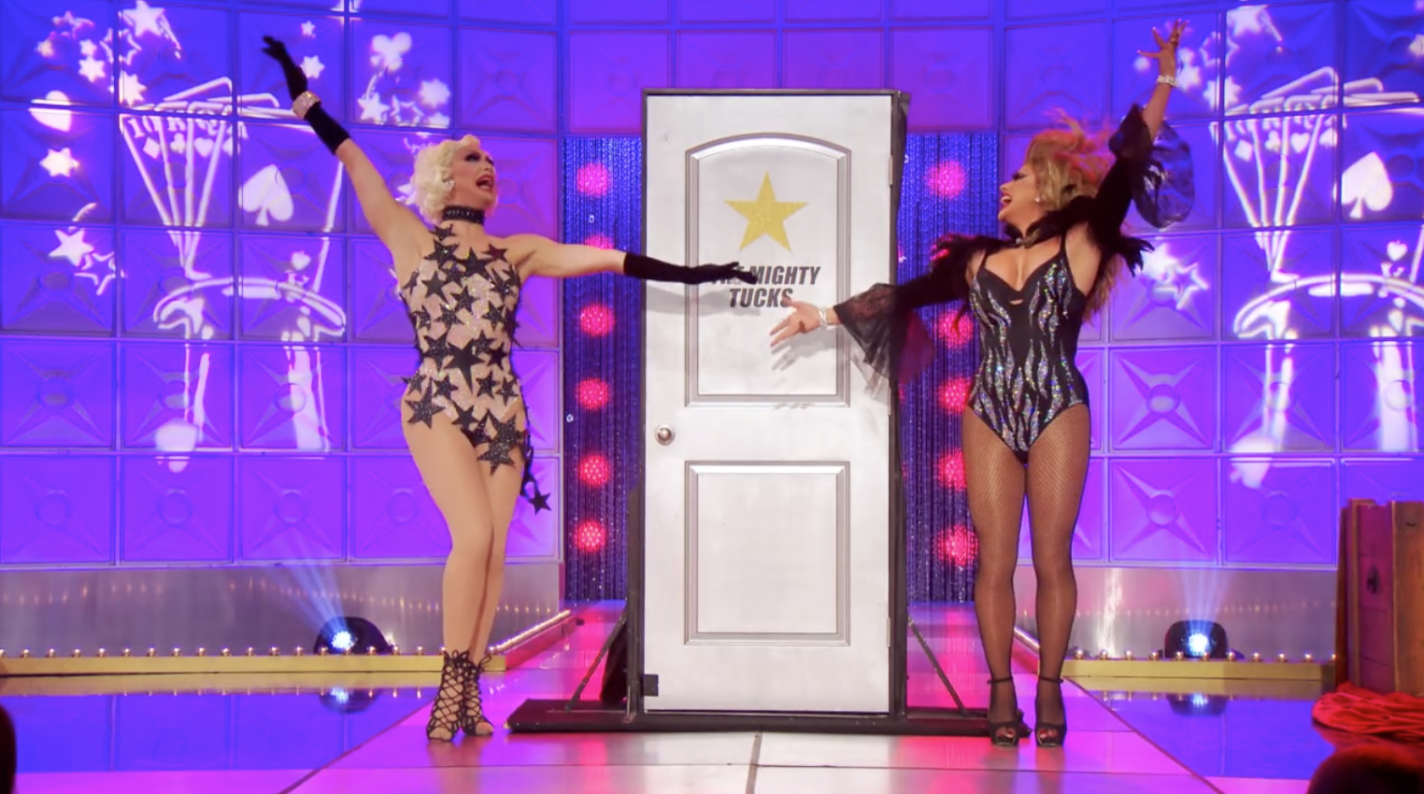 By far, Nina looked the most confident on stage and her natural stage presence and humour shone through. But they all did great in this challenge. They had choreography, great jokes, they all looked like a uniformed group and all the tricks went to plan! 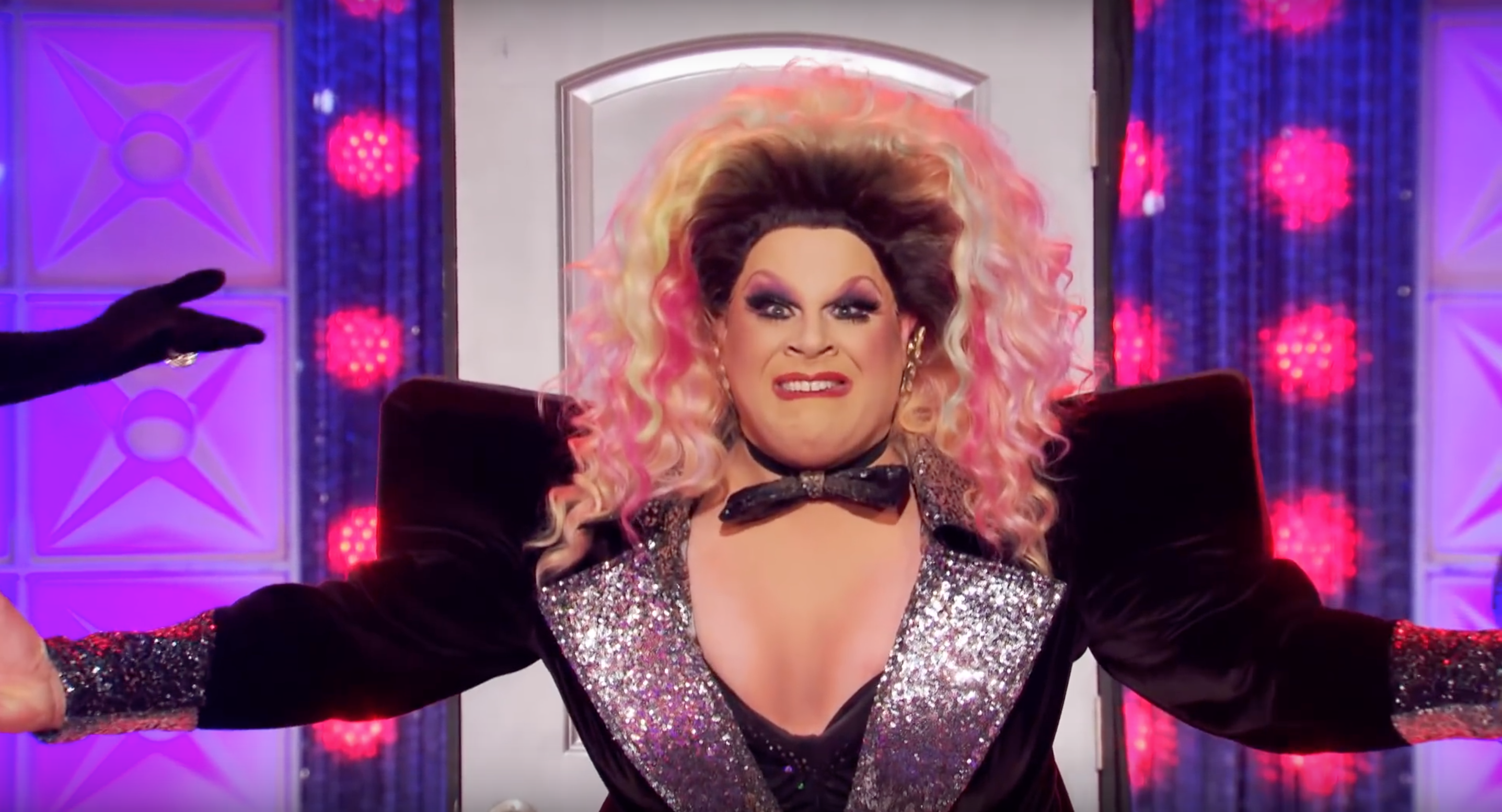 Nina’s bottle act was hilarious, well presented and done effortlessly. At this point, it was quite clear that Nina was the winner of this week’s challenge. 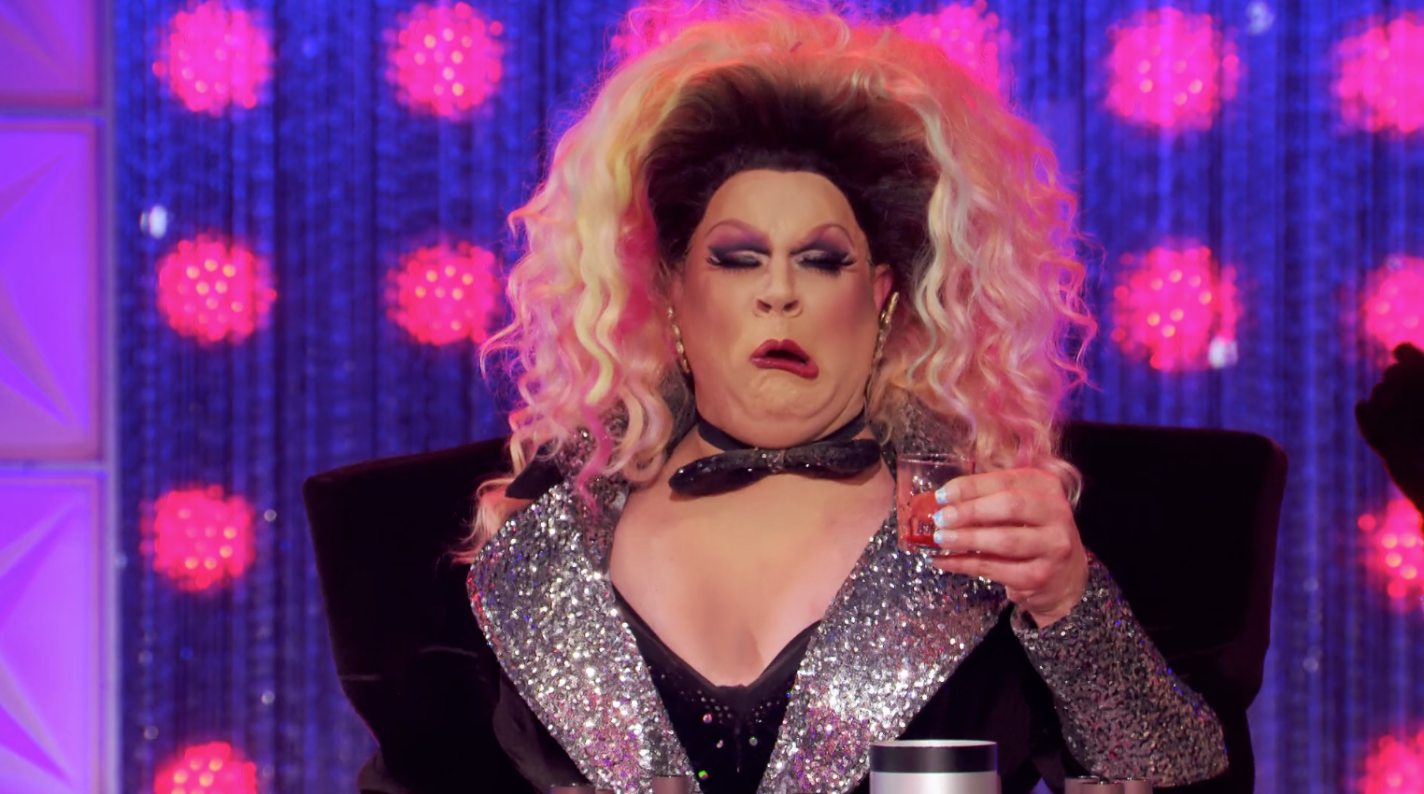 Shuga’s act, sadly, didn’t quite have the same flare as her co-star. It wasn’t bad… it just wasn’t great. Her jokes fell a little flat but other than that she played an equal part in the show, knew her parts and participated in the routine. 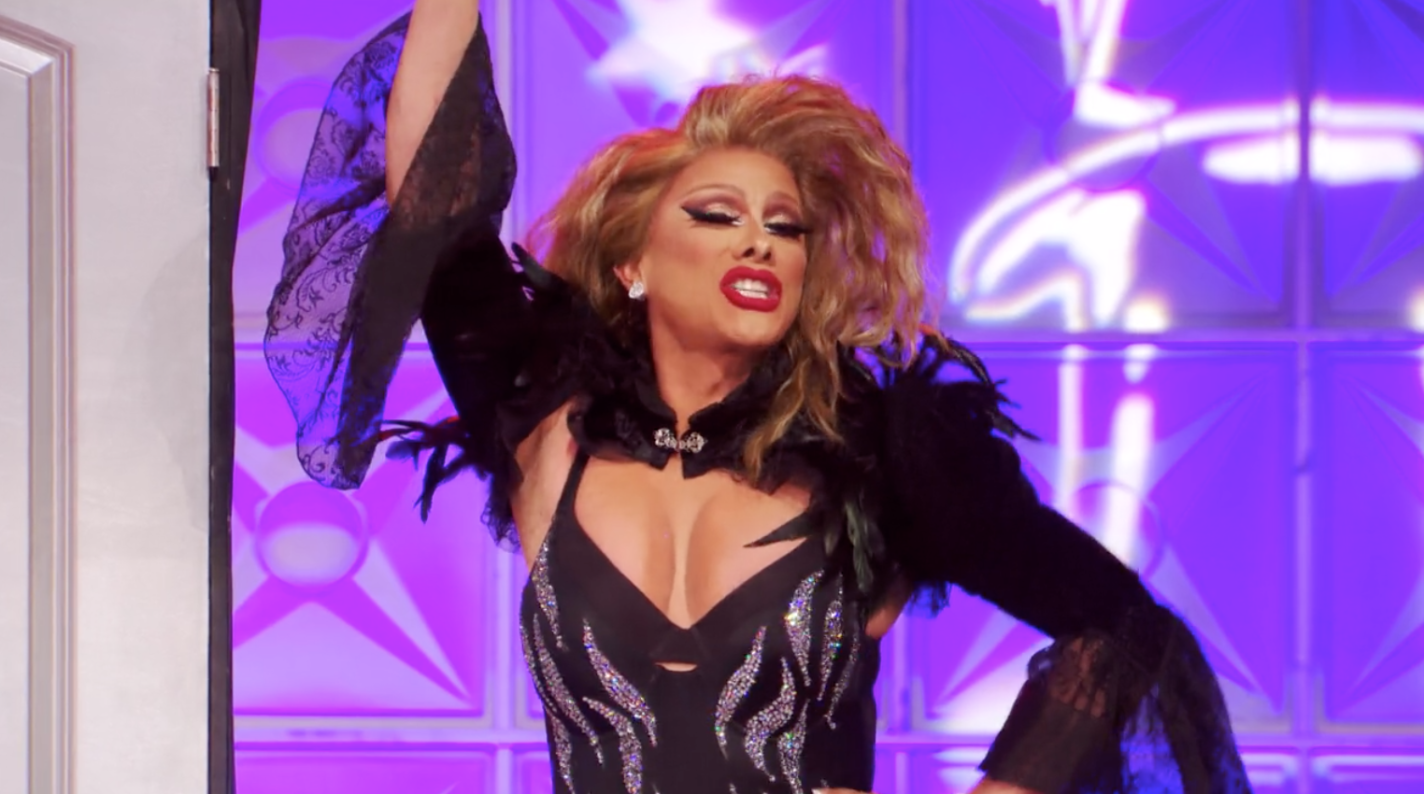 Brooke also did a good job. Again, not the star, but a great team player. Her trick was good and her character was funny but Brooke and Shuga were more like magician’s assistants to Nina’s show. 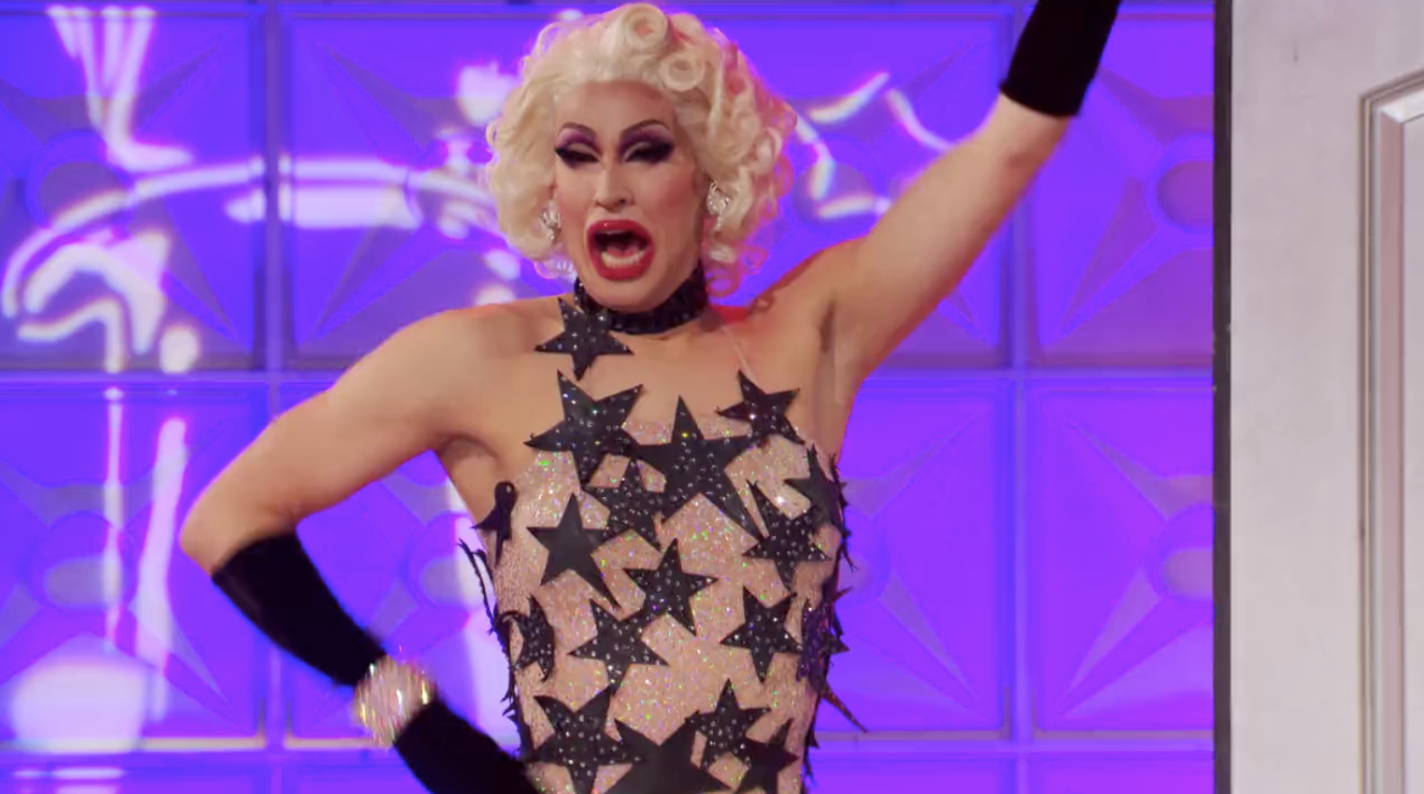 This was a mess from start to finish. Yvie said they should work on a script, the others said they’d rather ‘wing it’ and wing it they most certainly did not. I’ve seen better nativity plays. 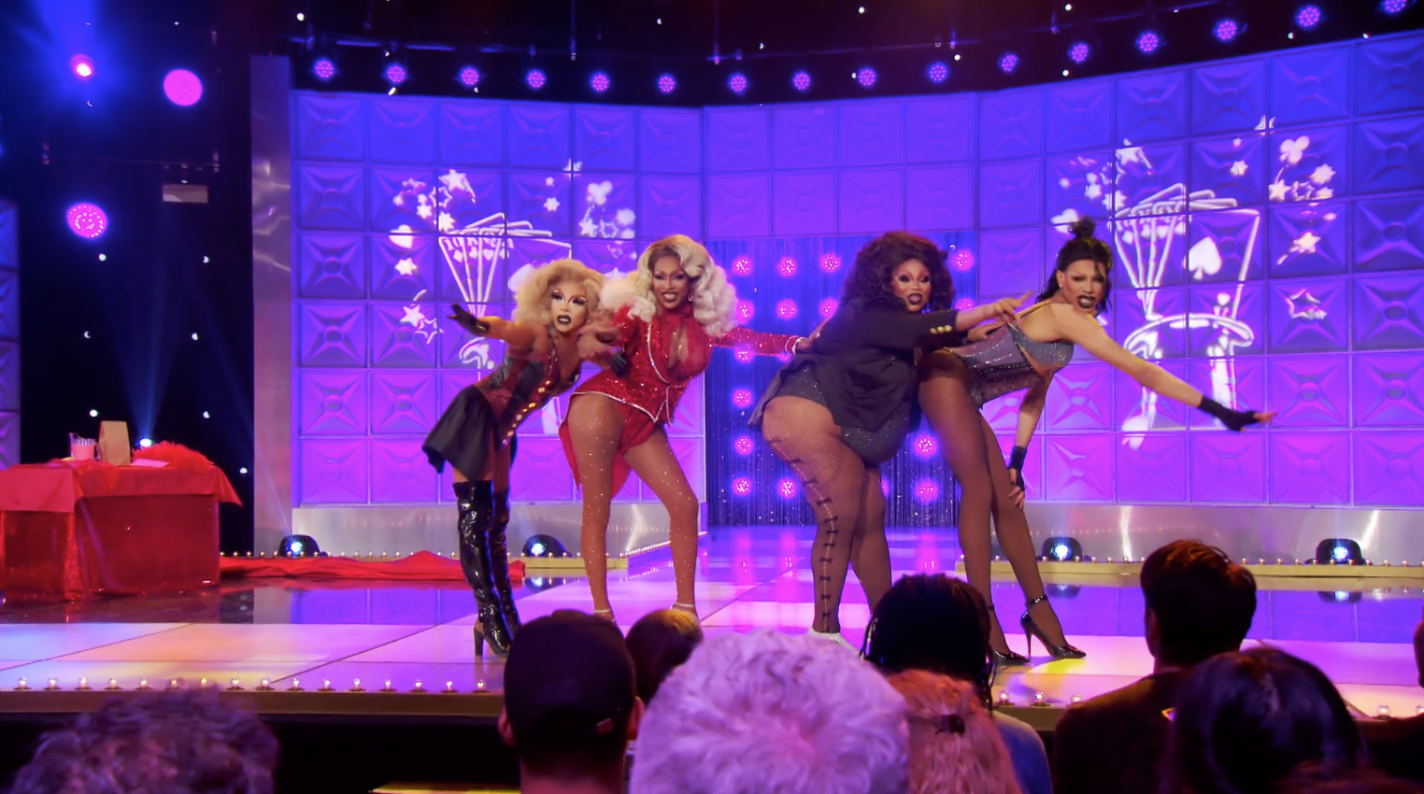 Firstly, what the hell was going on with Silky’s pads and tights?! She looked like she’d been stapled into them. Her leotard also was bunched and gnarled – if this were any other queen, it would have been a more severe telling off from the judges. 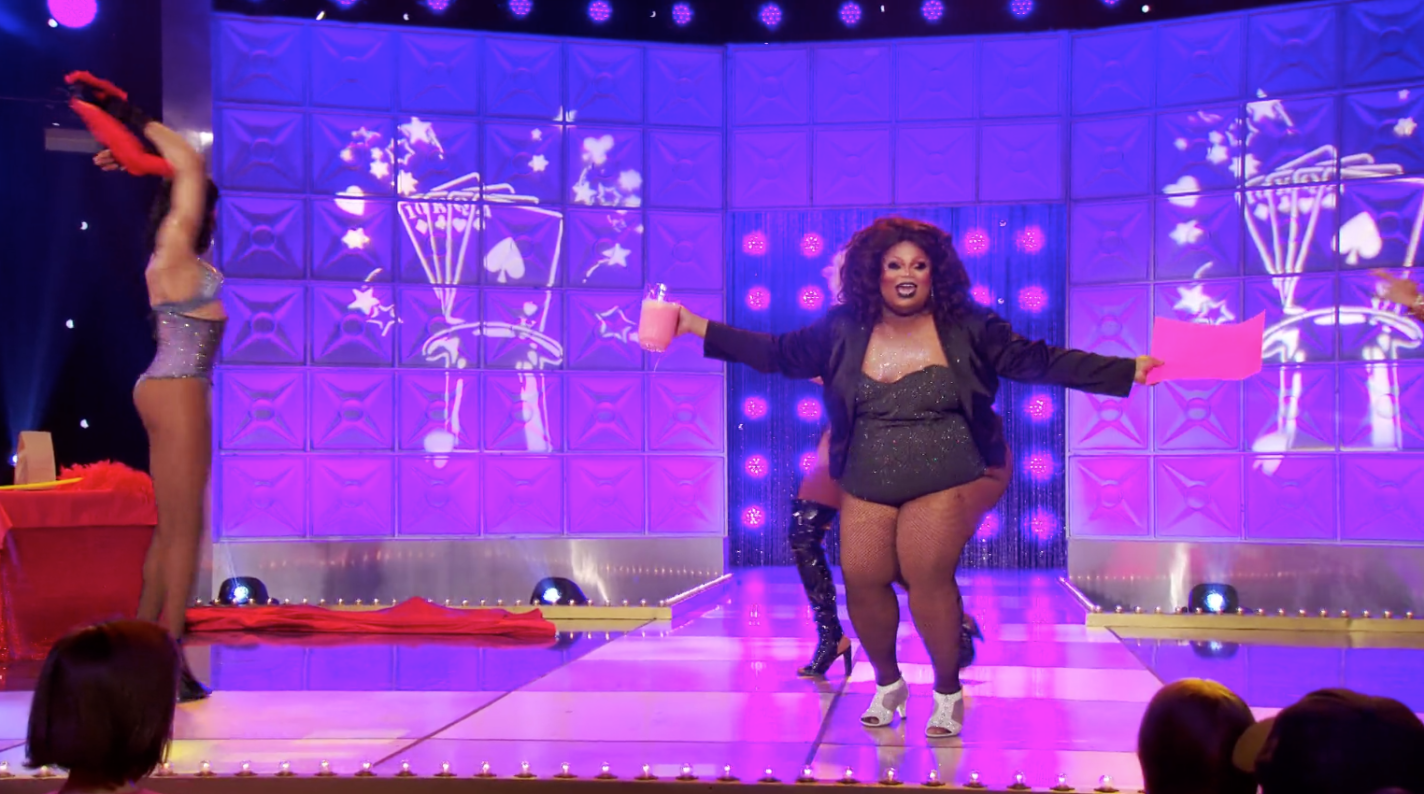 The performance from all was sloppy. They kept stepping on each other’s lines, delivering shite jokes and looking lost throughout. It would seem that ‘team personality’ fell flat. 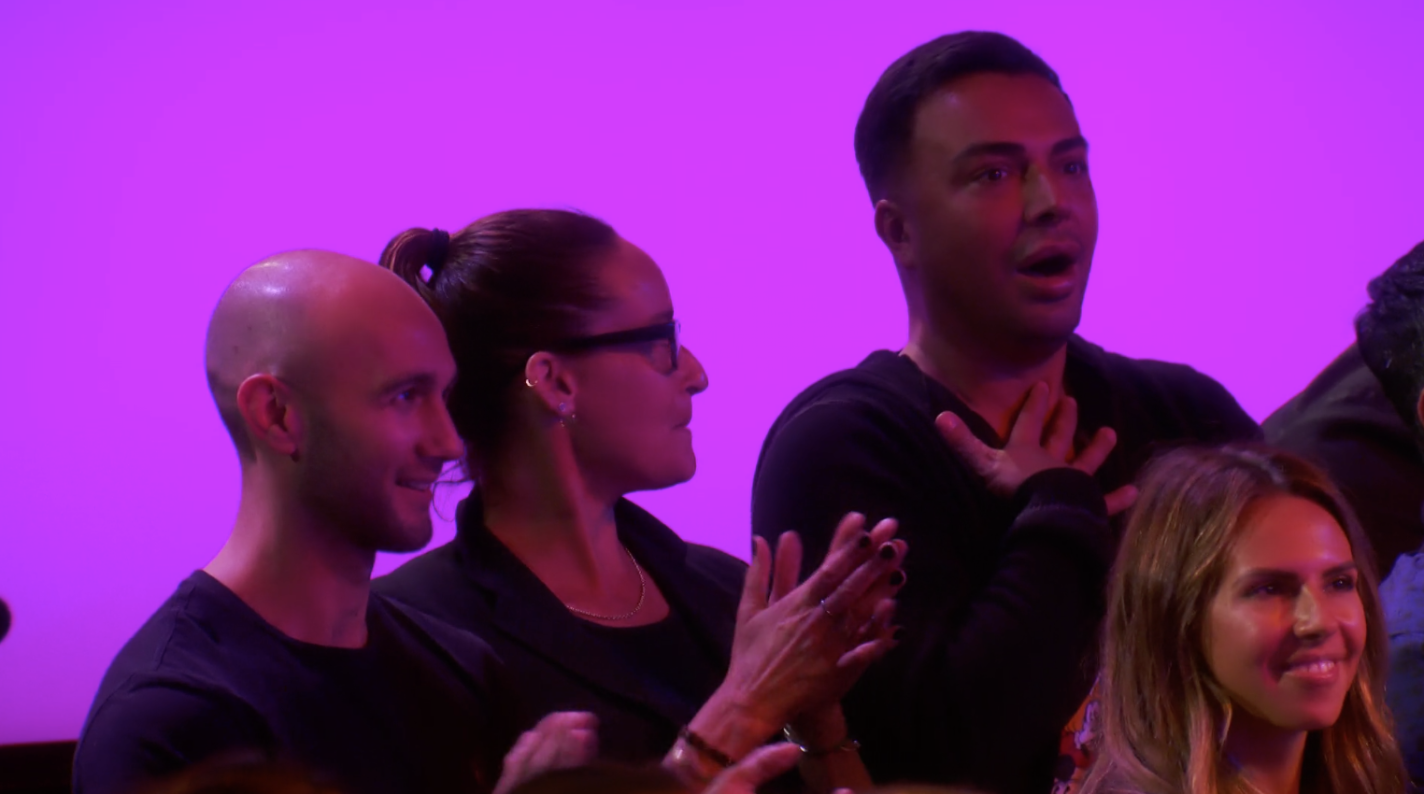 Category is: Kaftans – Toot or Boot

This week the queens would be donning a Honey Mahogany classic – kaftans on the runway! 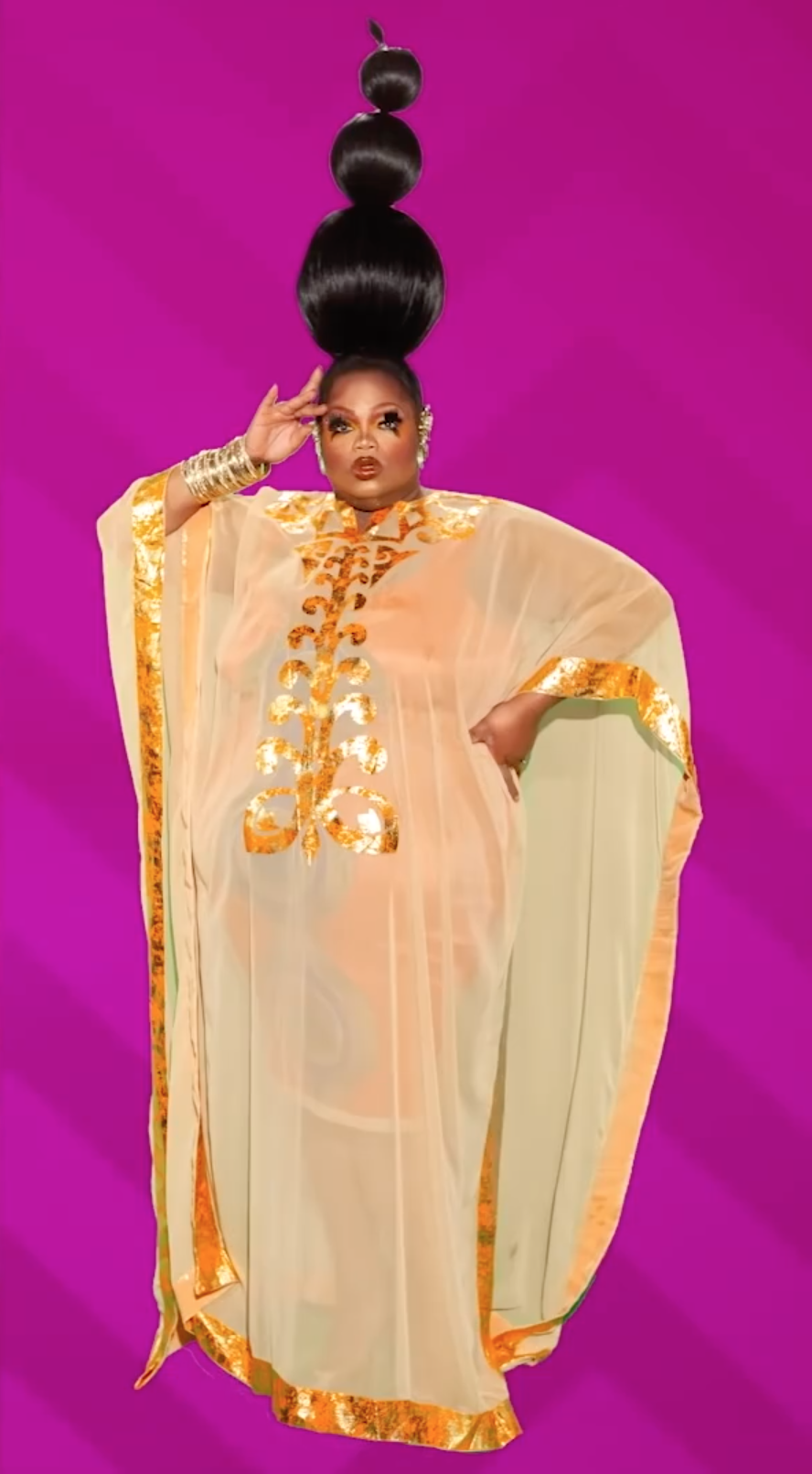 Is it weird that the first outfit I’ve actually liked that Silky has worn on the show was a kaftan? Kaftans are gross but I actually think she did a great job. The hair was fun, the colour was nice, the eyebrows… not so much, but I think she did good. 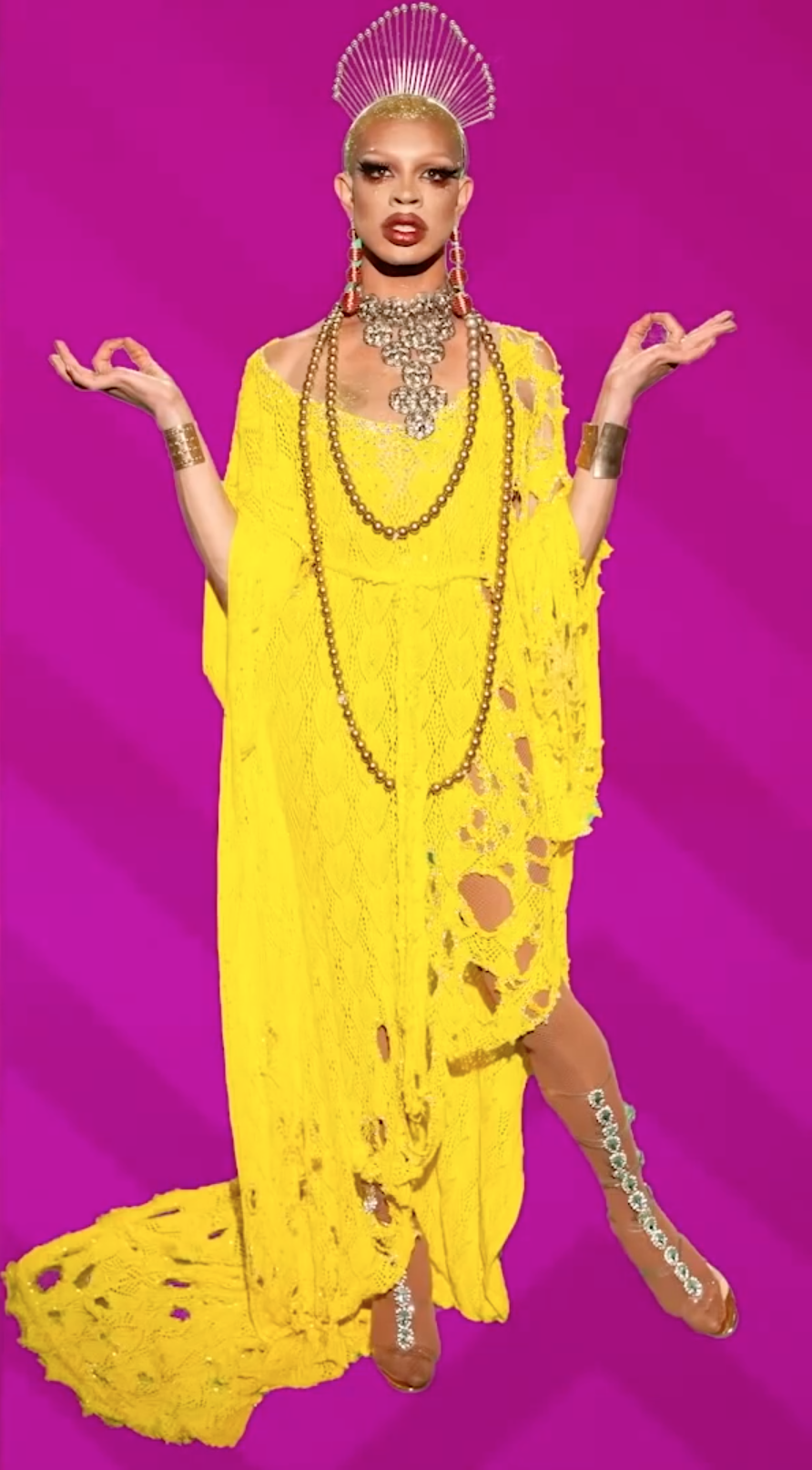 Adore this. It was campy, cool and modern. Who needs a wig when you can just cover your scalp in glitter? 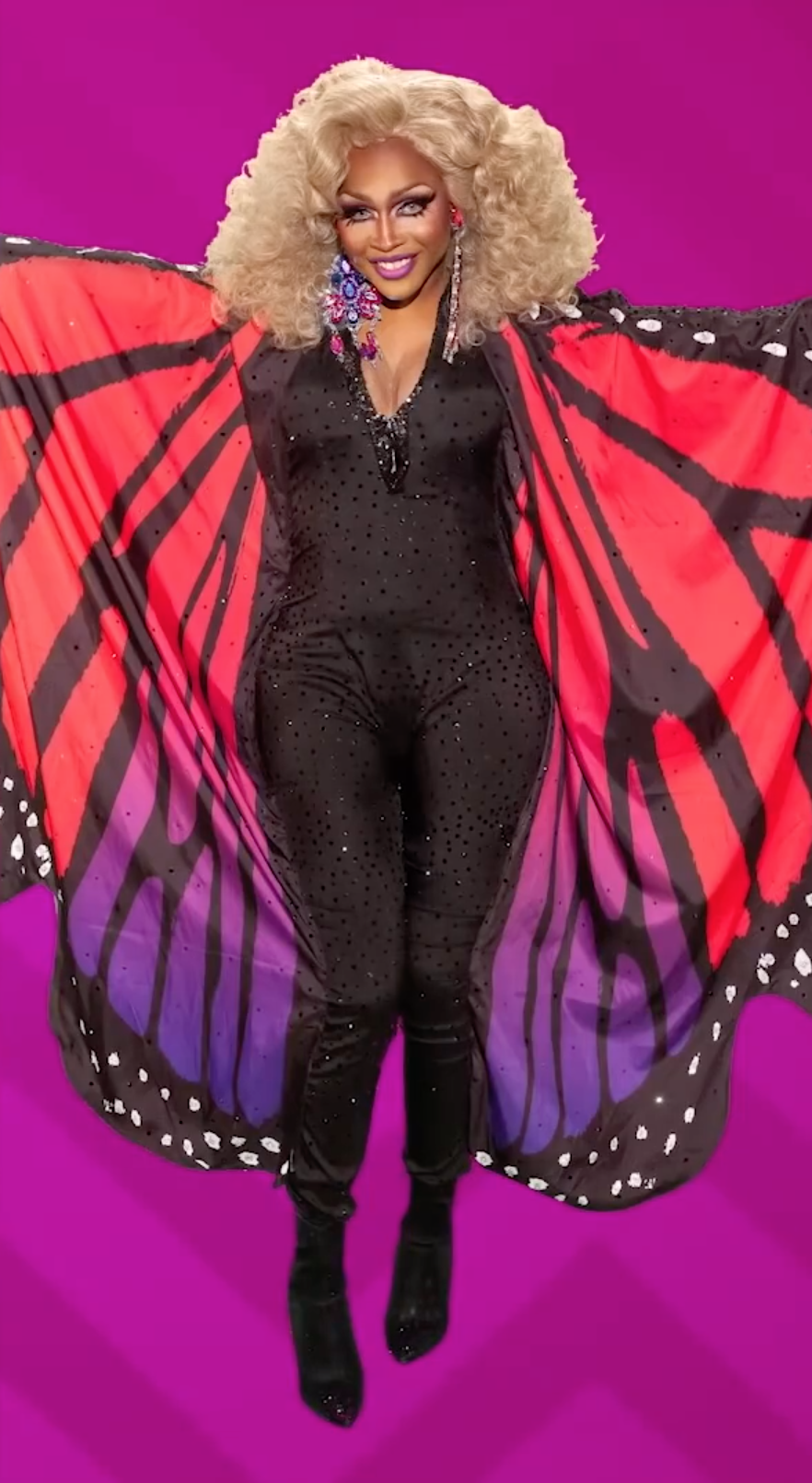 This is not a kaftan. There’s nothing more to say. 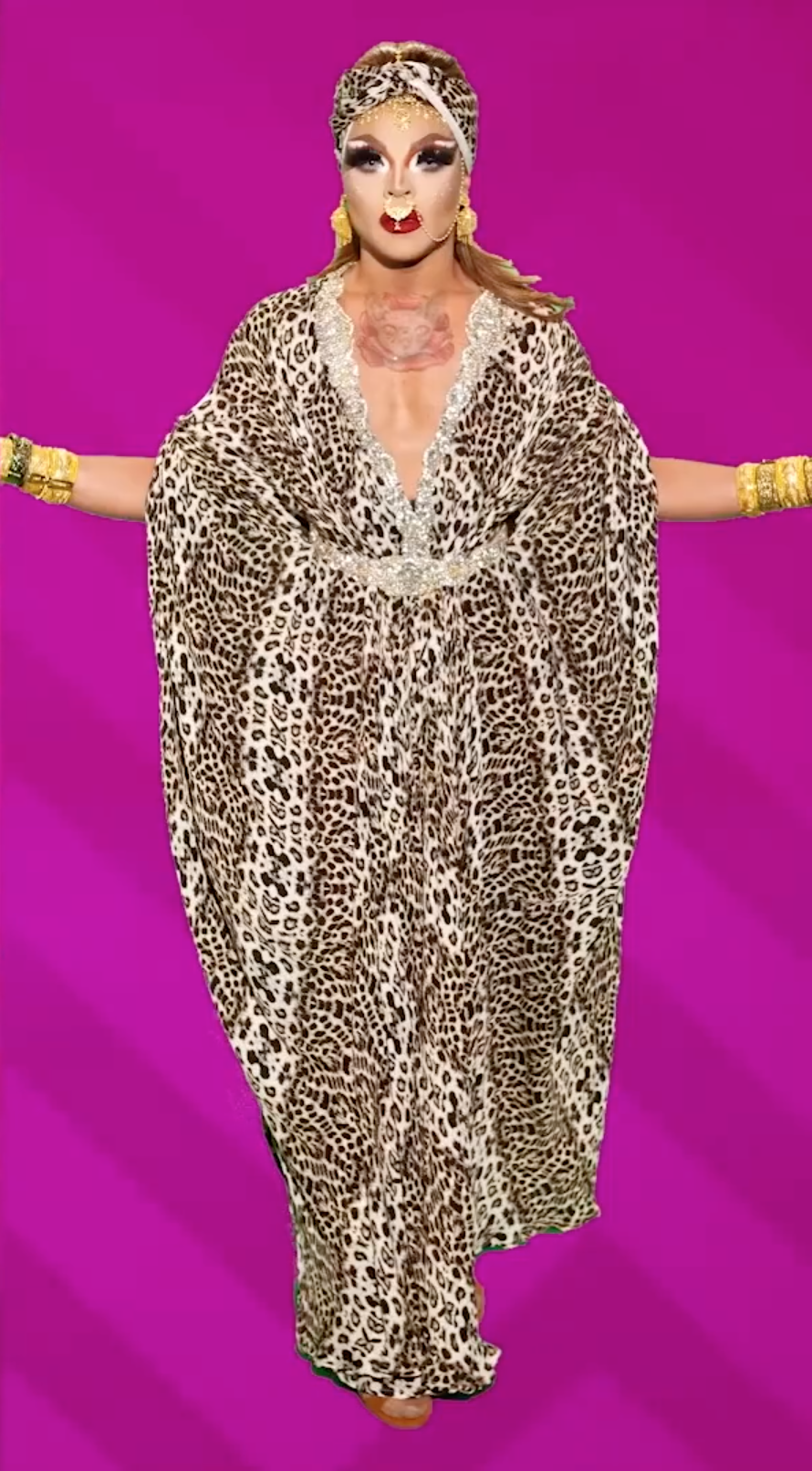 This reminds me of one of those grim fabrics you see on a dinner lady’s tabard or a hairdressers robe. The wig looked cheap and shiny, the kaftan was a bit grim but the facial jewellery was fun. 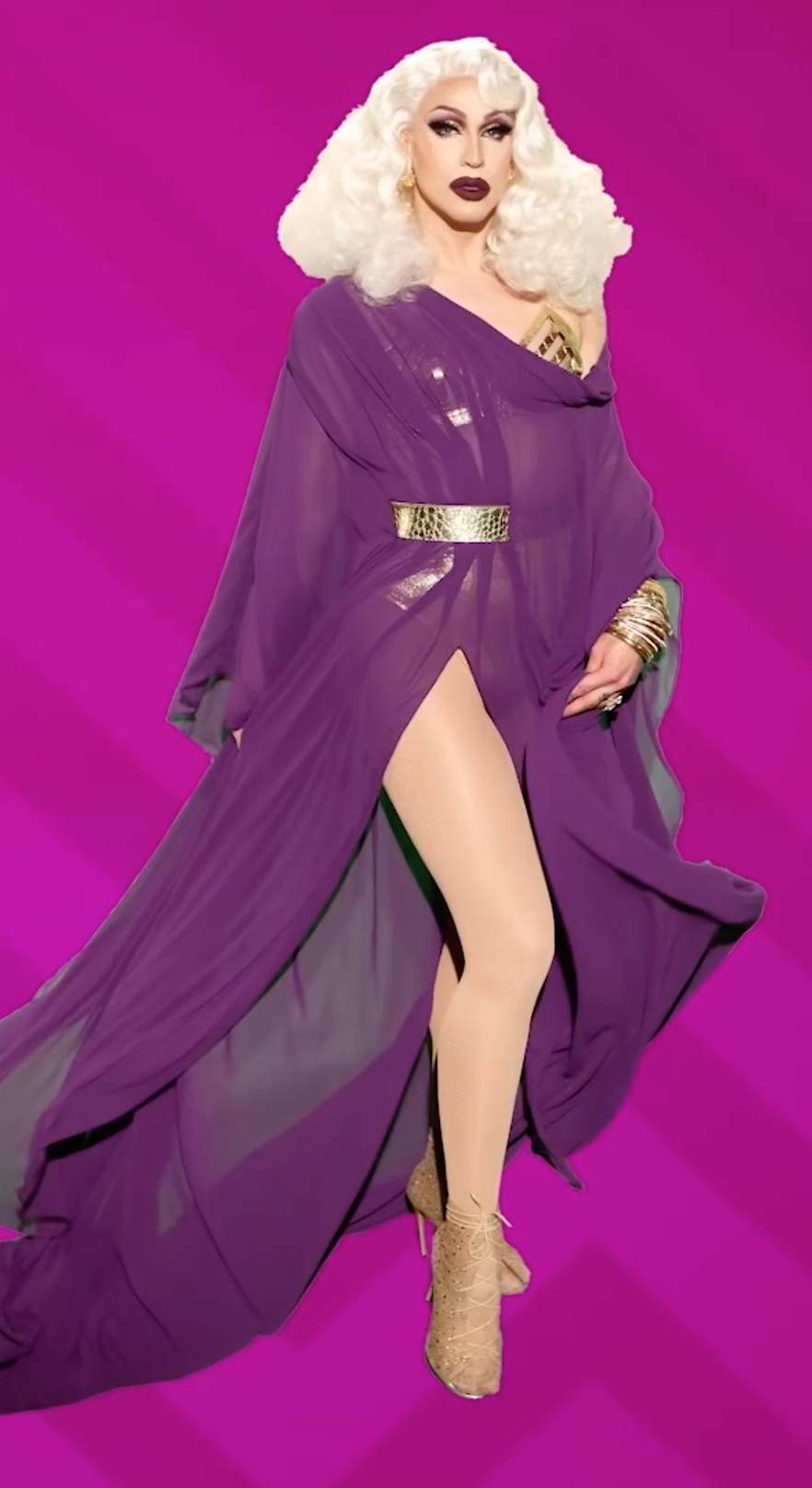 Pure sass. The colour was great, the gold details were lush and the wig was beaut. The only thing I wasn’t keen on was the shoes, they looked like little dog poo bags on her feet. 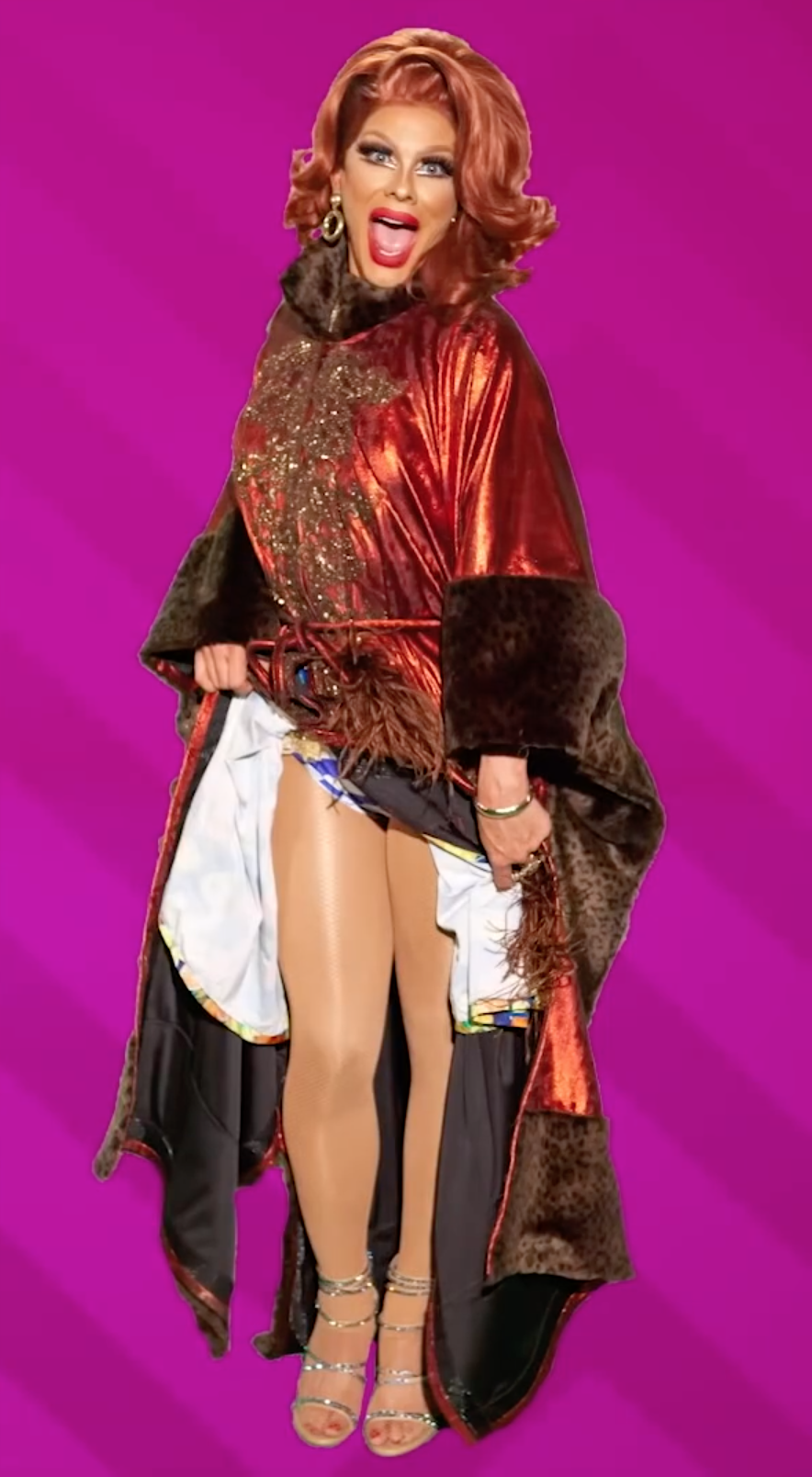 I actually quite liked Shuga’s presentation. Kaftans aren’t glamorous or pretty so she revealed three different kaftans. The judges slagged them all off but I actually thought it was quite fun. 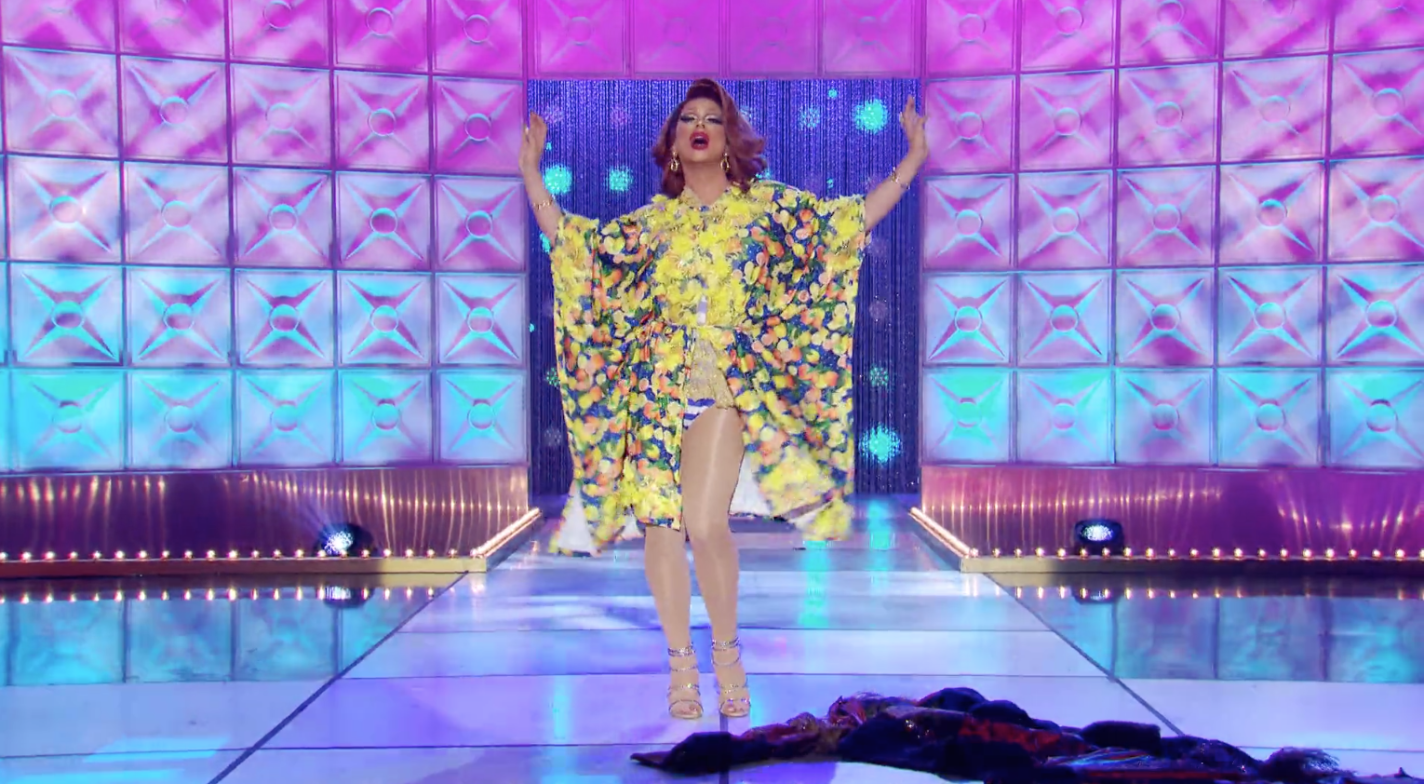 Not that I’ve joined the Illuminati but it was obvious that they came down hard on her costumes to make it more valid for landing her in the bottom… It didn’t work. 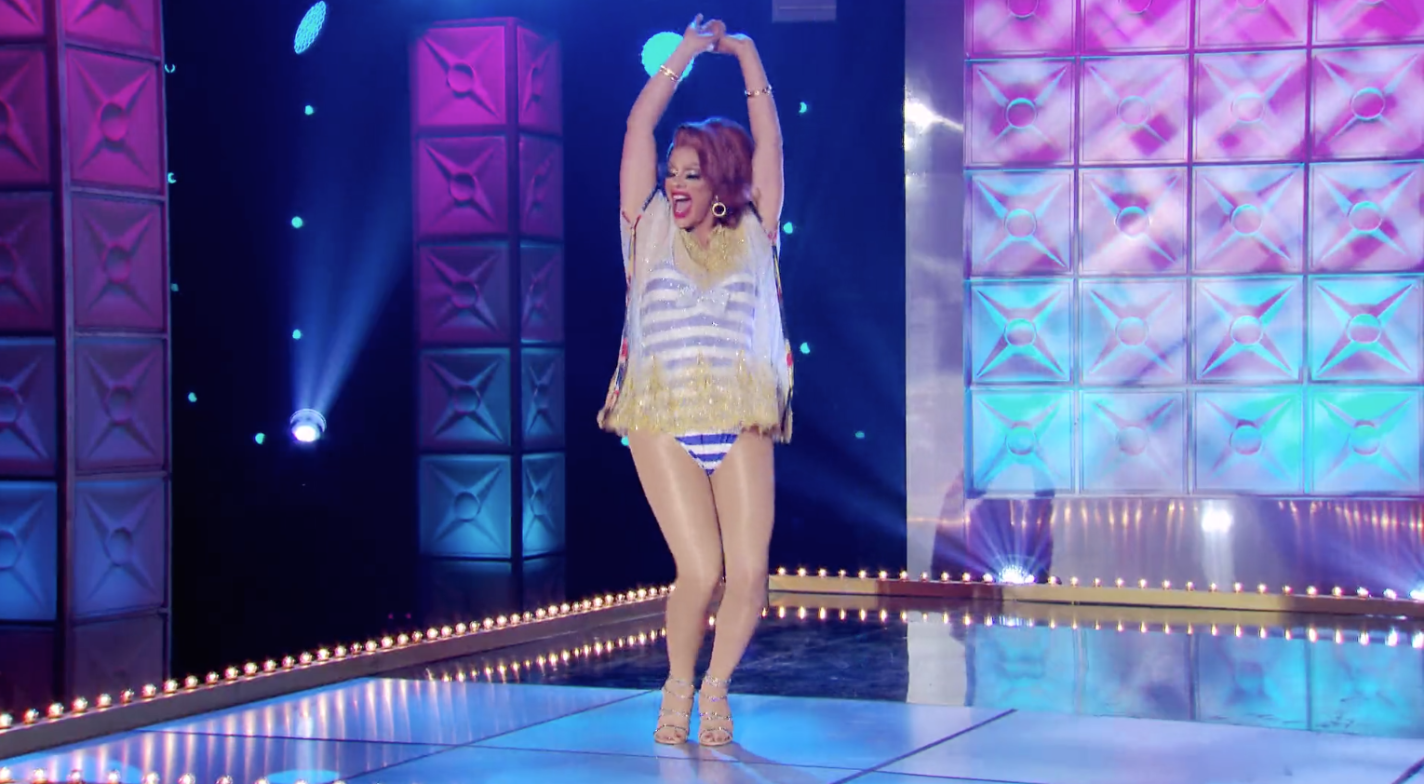 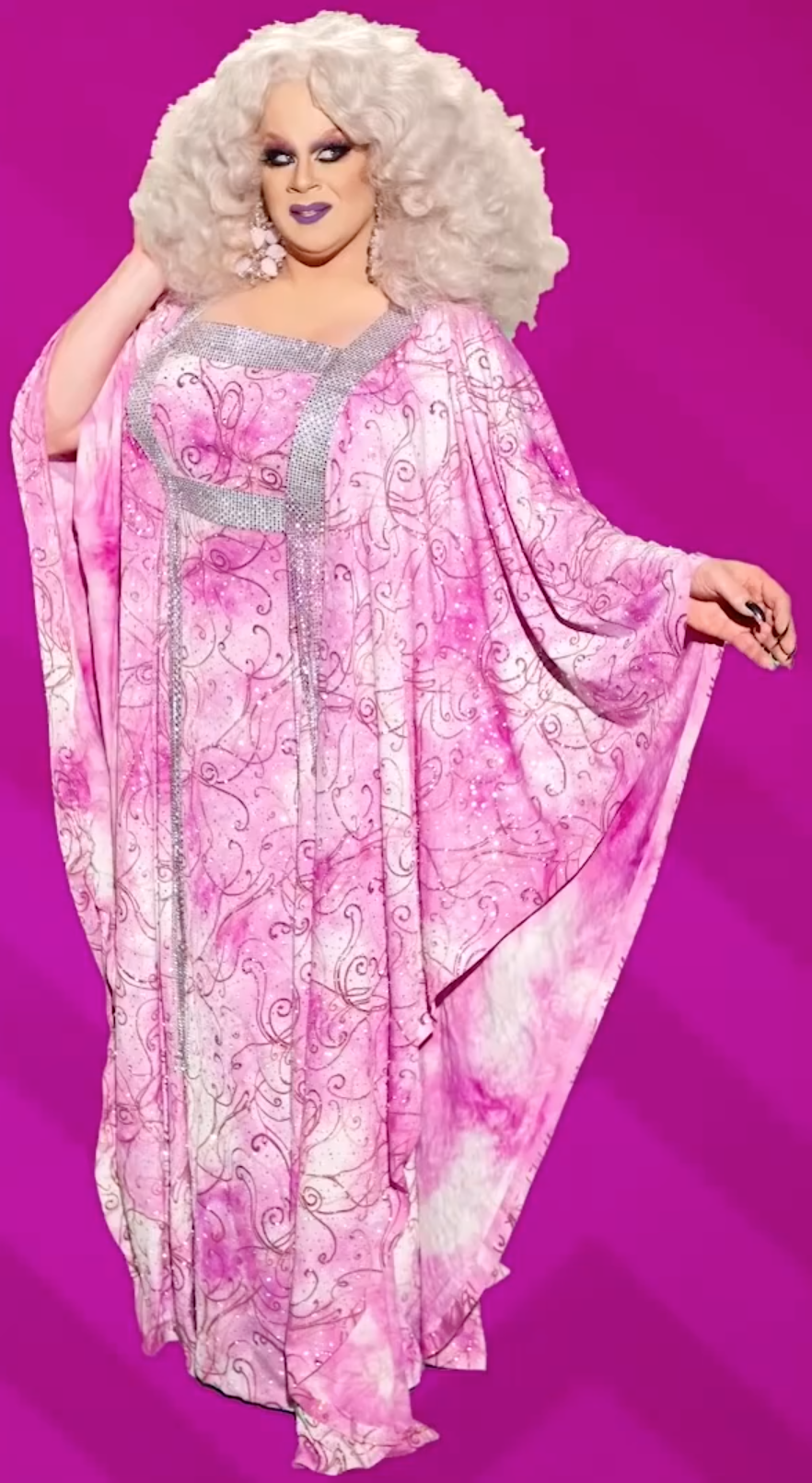 Kaftans are gross, but this was fun, campy and classically Nina. There was nothing to critique about this other than the awful fabric. But it’s exactly how I imagined a kaftan runway to go. Also, her makeup looks nice this week and the big wig suits her.

Of course, Nina won this week’s challenge – she was a true star. If she doesn’t tour as a drag magician, she will be missing a trick – no pun intended.

Shuga (boo hiss boo RuPaul) and Vanjie were both in the lipsync. Sadly (for me anyway) Vanjie gave a great performance which left Shuga sashaying away.

I know the whole article has basically been my opinions but I was beyond annoyed to see Shuga be eliminated this week. Her outfit wasn’t anywhere near as bad as the judges made it out to be – I actually thought her multiple kaftans were fun and she was on the winning team!

Shuga shouldn’t have even been in that lipsync. Yvie was awkward and stilted, Silky fluffed her words and wore one of the most repulsive outfits that should have landed her in the bottom for sure. You could see her hip pads and the leotard was sloppy. Shuga was robbed and for what, so Ru could keep Silky for the final?

This week, I gained a measly 1 point which took my total to 57 points and Tom got 6 points which takes him to 58 points and he’s now in the lead for the first time in the competition. Vanjie drops down to 7 points. 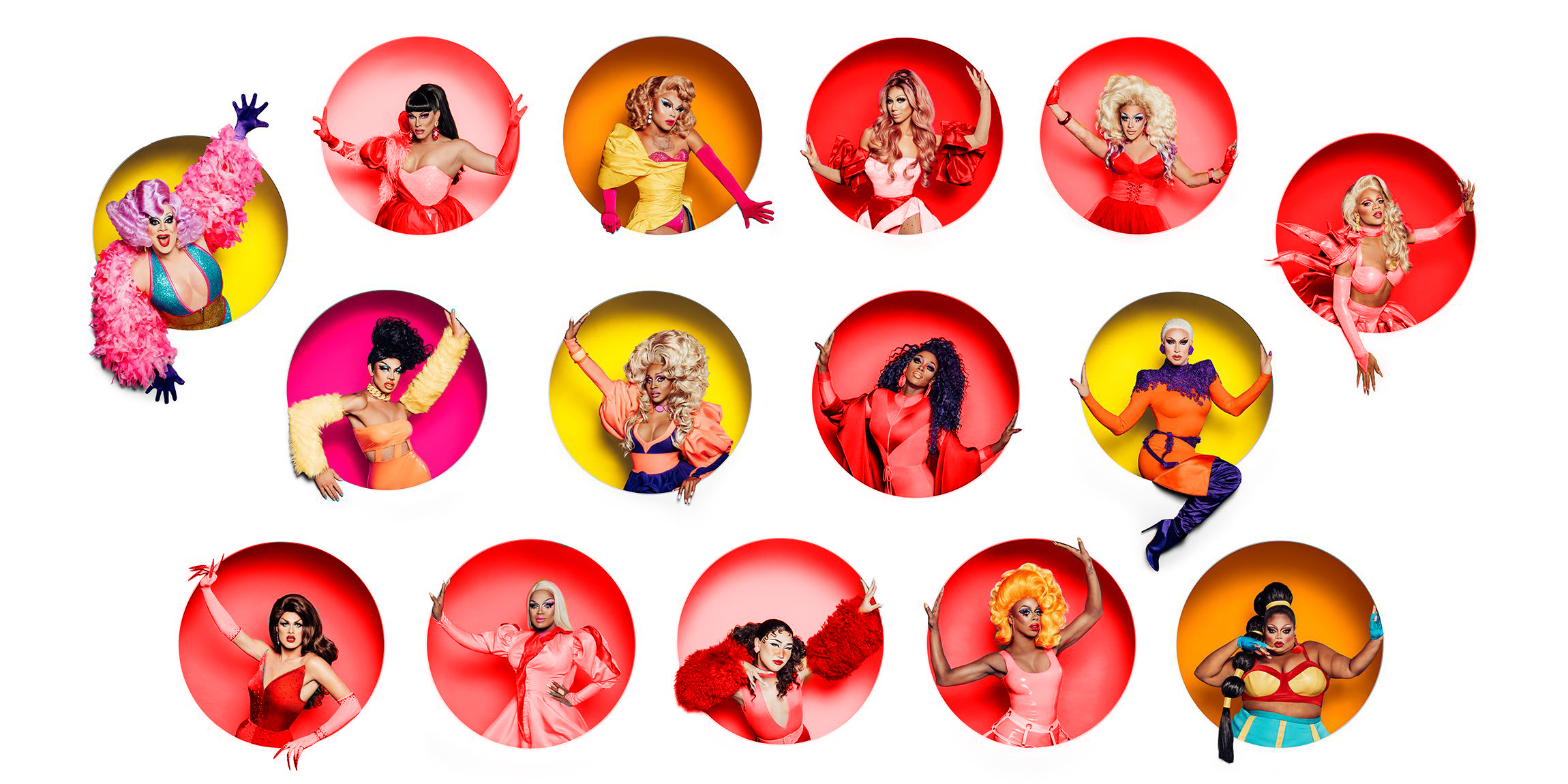