“The Lady’s Not For Turning” Halloween 2019 – Margaret Thatcher & More

Another year, another ‘gay Christmas’ (or Halloween as it’s more commonly known) rolls around. Now, I love Halloween (duh – homosexual) and as always, I know I have to come up with a character/concept that will appeal to the masses. I debated a lot of ideas and with a strict budget this year, I knew I had to get creative. Then it hit me… Margaret Thatcher!

Honestly, the amount of money I had to get a costume and whatnot this year was minuscule. I went back to my parents’ house, got up in the loft and rummaged for dear life through all the boxes of costumes from yesteryear. Thankfully, I had a lot of brilliant pieces that would work for Margaret Thatcher already. But we’ll get back to this story later.

Why I Love Halloween

Halloween for me is one of those brilliant times of the year where you can wear some truly weird shit and it be appreciated. It’s also a chance to dress in clothes/costumes you wouldn’t normally get a chance to do. 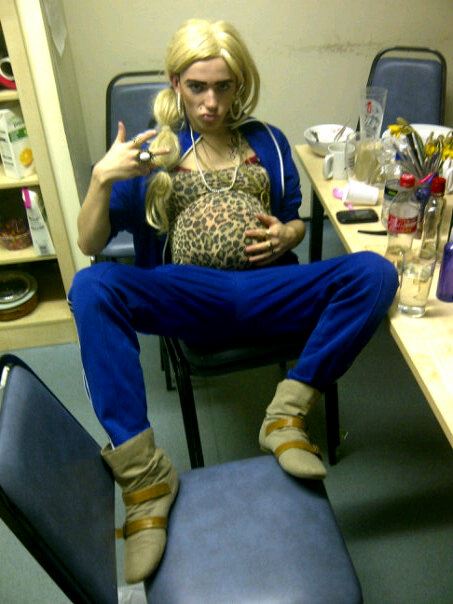 It was Bob the Drag Queen who once said something along the lines of every drag queen started out somewhere – they’re either a “pride queen or a Halloween queen” so you definitely see a lot of fun drag costumes for Halloween.

I’ve always loved Halloween, I love dressing up and I love seeing other people’s creativity shine. For me, my favourite concept for Halloween is to go dressed as a celebrity, don’t know where the fascination came from but I have a lot of fun doing it.

So in a little ‘Budget Heidi Klum’ moment, I thought I’d show you some of my costumes from yesteryear and how it got me to this year’s costume. 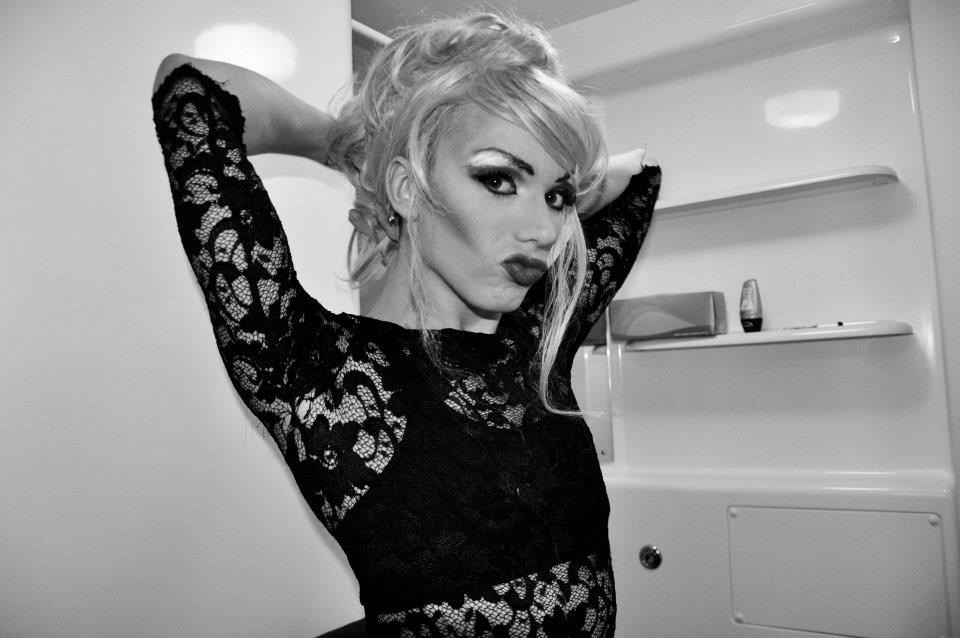 In my first year at university, I decided to go dressed as the legendary Patsy Stone for a 90’s night. I have to be honest, I was rather proud of this one and it seemed to get a good reaction from people. 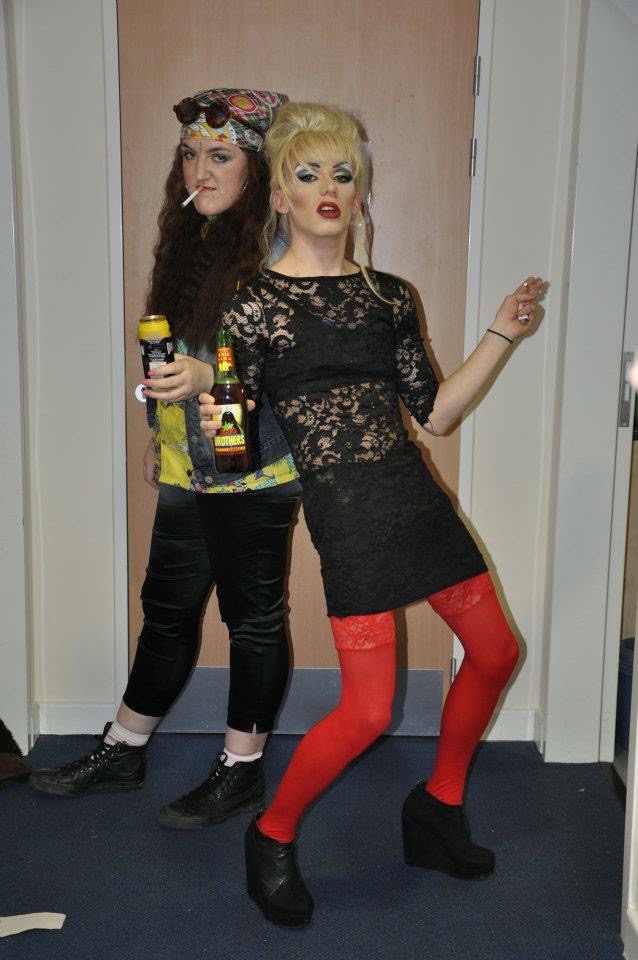 I even managed to gain the attention of some straight men who kept flirting and offering to buy me drinks… until my Yorkshireman’s voice came out. 😂 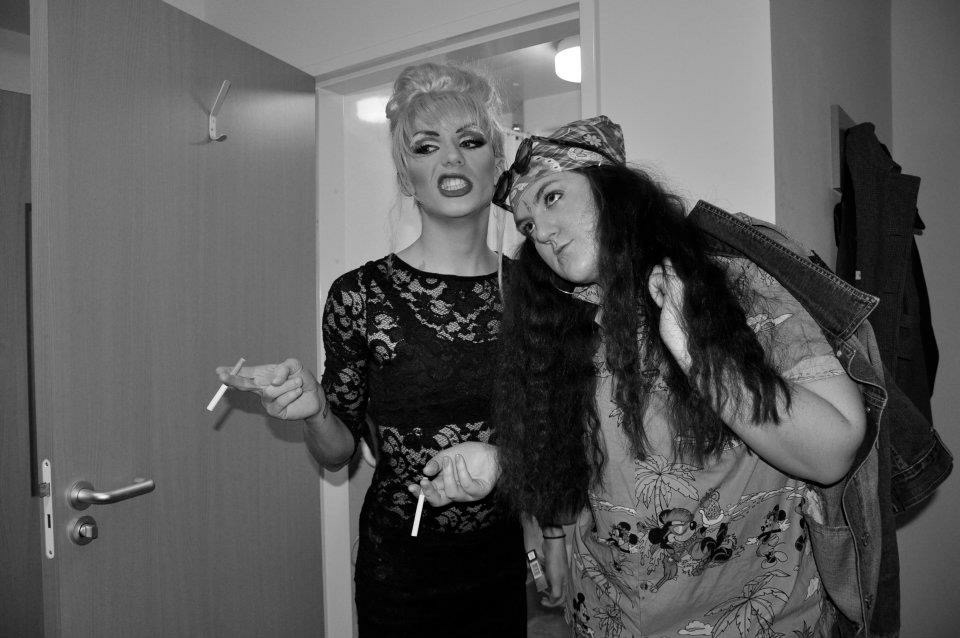 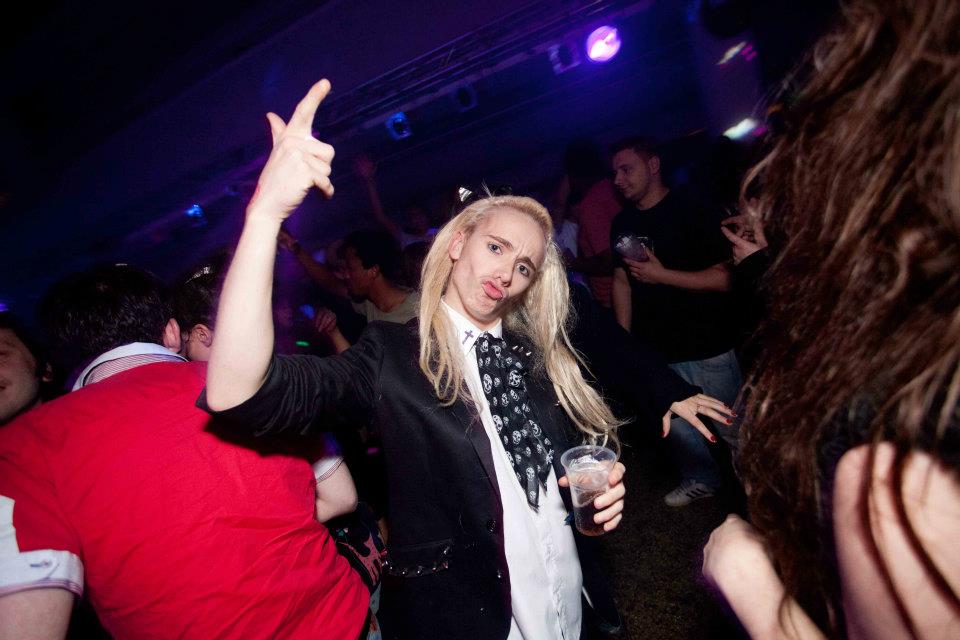 My friend had a Harry Potter-themed party and I didn’t quite fancy wearing a school uniform so I went as the sassiest human being from the franchise. I went as the ‘hair goals’ himself, Lucious Malfoy. I managed to restyle and repurpose my Patsy Stone wig and turned it into this gorgeous creation. 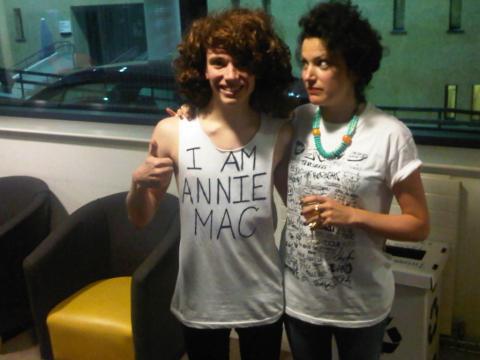 DJ Annie Mac came to our student union in my first year at uni and I thought it’d be a hoot to do a lazy dress-up as her. She seemed to find it funny and asked for a photo in her greenroom (yum yum yum, champagne for everyone)!

She shared the pic on her Instagram and mentioned me the year after saying she hopes I returned… we met up again and I got more booze – oi oi! 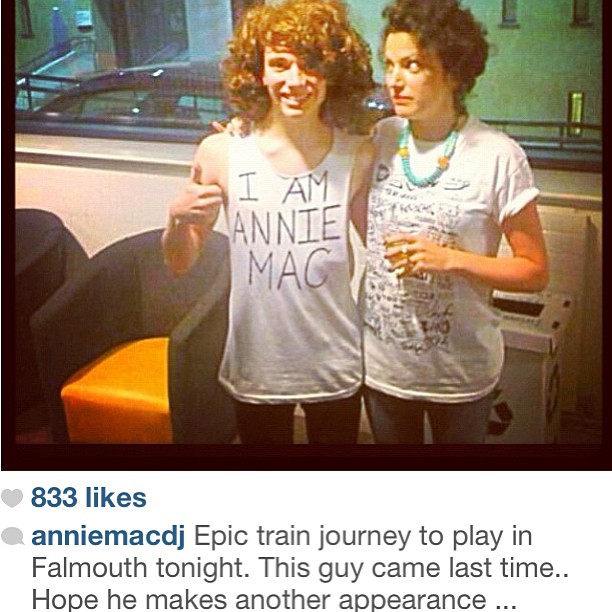 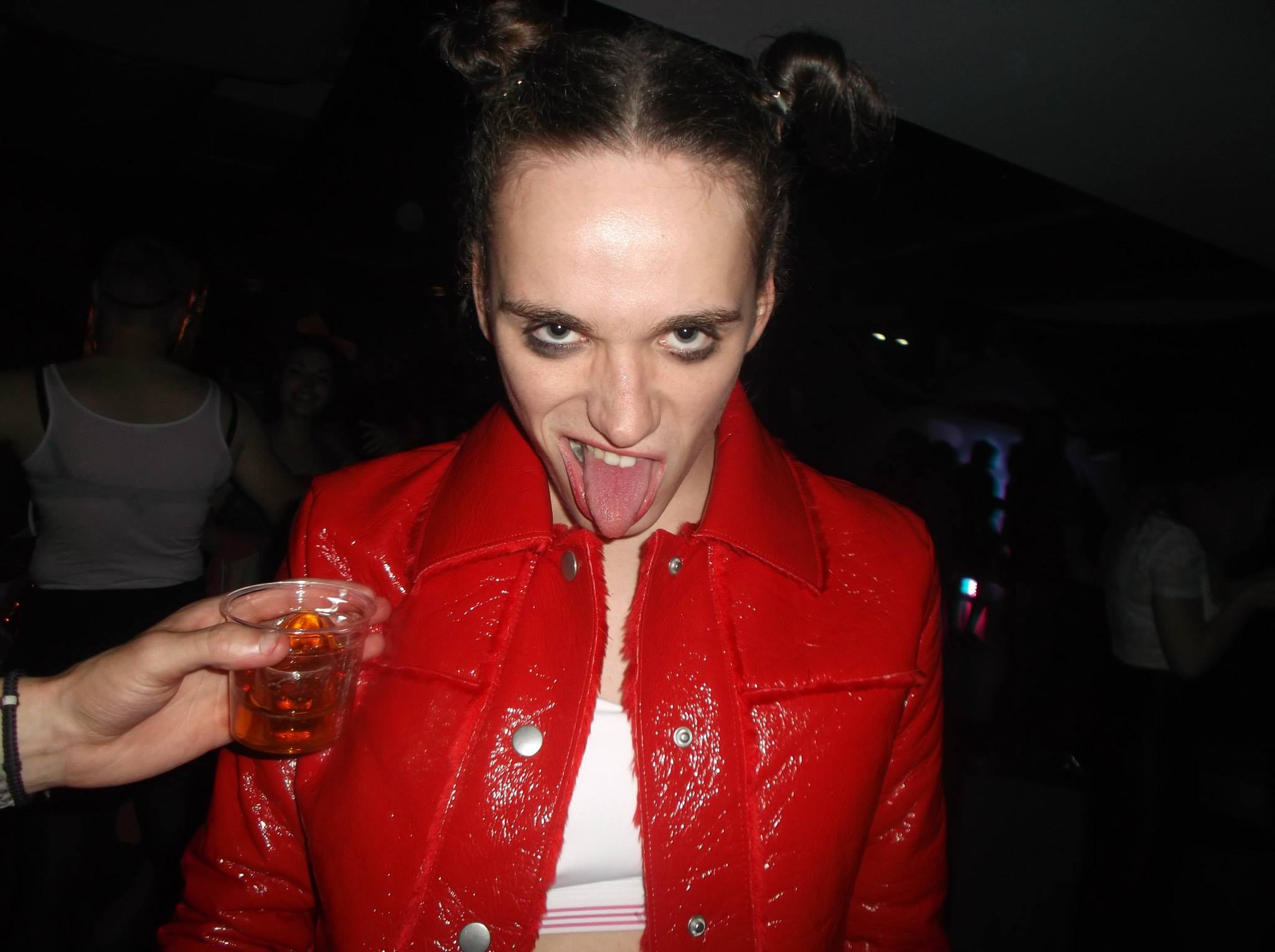 A nice simple one here, this costume was incredibly last minute but I think it came together. This was just after the whole reinvention era and that Robin Thicke ‘thing’. 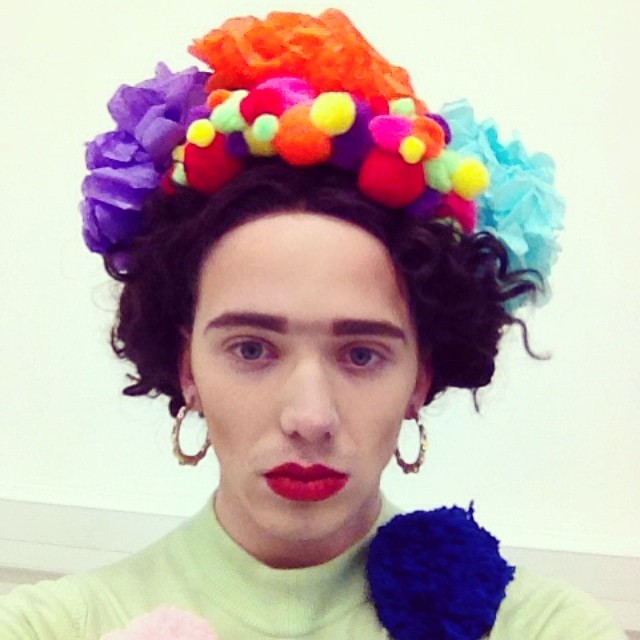 I went dressed as Frida this year and stupidly forgot to get a photo of the outfit. I went in all black and was very gothy, anyway, here’s a picture of me as Frida for a photoshoot my friend did at university to make up for it. 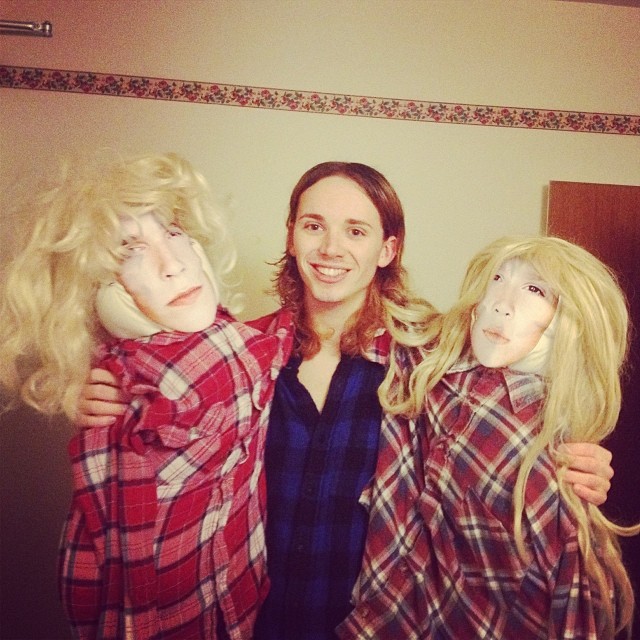 Another joke last-minute costume, I decided to go as all 3 members of 90’s sibling boyband, Hanson. With 2 pillows pinned to me and a couple of cheap wigs, I had my brothers by side and I was ready to rock yet another 90’s night at our student union.

This was the start of the Halloween Harry 2.0 era. Seeing as I got a good reputation dressing as celebrities at university (and there was a lot I haven’t listed here including; Amy Winehouse, Russell Brand, Princess Diana) and I knew I had to keep that trend going post-uni.

By now, you’ve probably guessed that this was yet another last-minute costume. All I needed for this outfit was a black wig (which I bought the day before) and I improvised with the makeup. I’m not a makeup user so it was the most botched job ever – I actually think I used a sharpie for the eyebrows. 🤦🏻‍♂️😂 Either way, I was pretty darn proud of this one and it got a good response on Instagram.

I was unbelievably happy with this costume. This was a true niche joke seeing as the ‘Thou Shalt Spend’ meme had become pretty big last year. I couldn’t think of anybody spooky or relevant really so I went old-school with a nice 2004 Ashley Tisdale red-carpet moment.

This was the true beginning of people expecting good things from my Halloween costumes. In fact, it was so well received that Ashley herself even shared it on her Instagram story! I could have died!

Now we move onto this 2019 – the rebirth of Margaret Thatcher

Before I give the big Margaret Thatcher reveal, here are some of the other costumes I wore this year. I attended a fair few Halloween parties and I definitely knackered myself with Halloween this year.

One of the parties this year was so last minute for me and as I was on a budget, I just found things in my wardrobe and turned it into something. 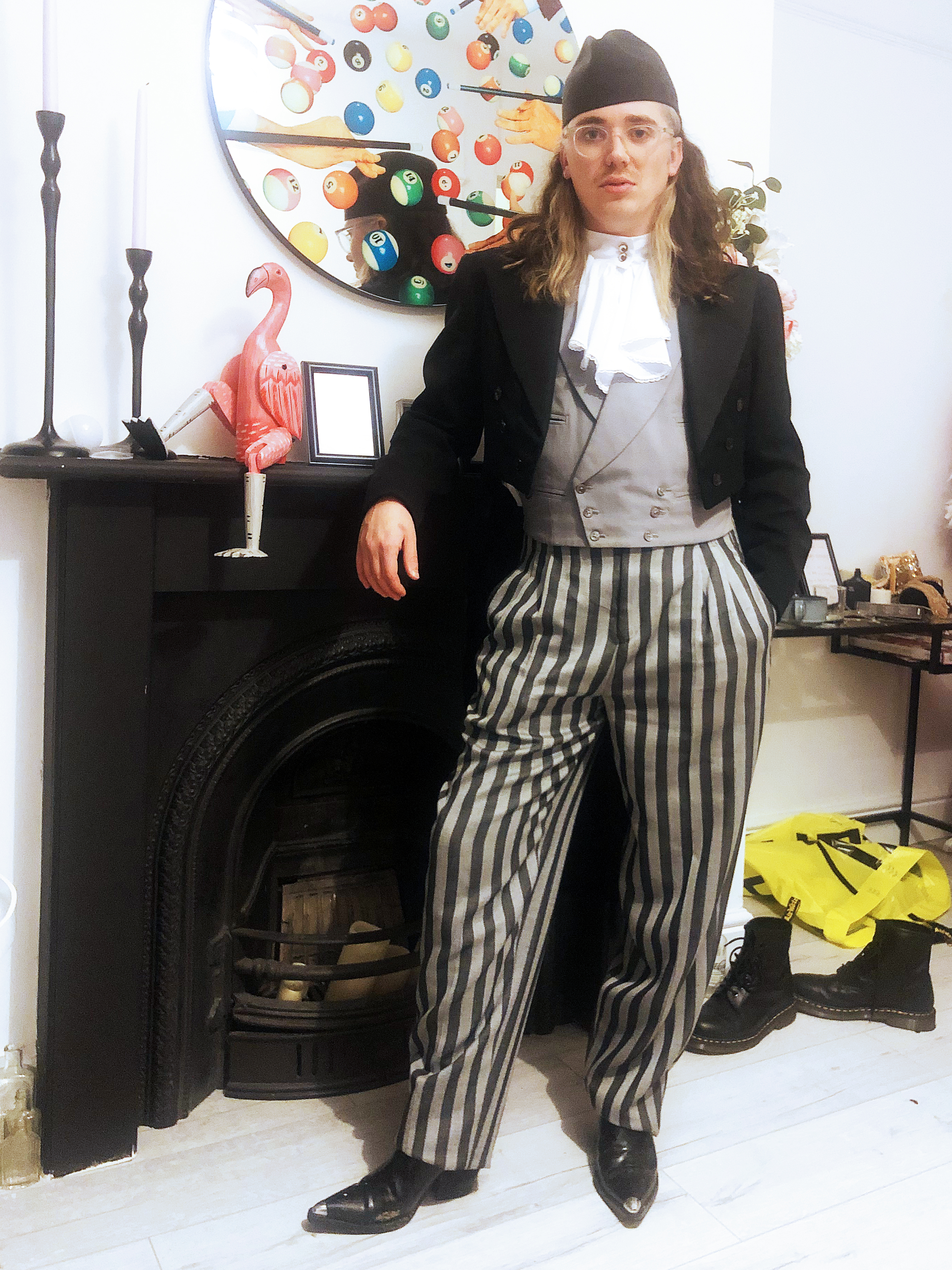 This was really just a chance to wear some fun items of clothing that I don’t often get the chance to wear. This was literally a costume put together half an hour (if that) before I got in the taxi to head to the party.

Okay, so this costume caused quite a stir for me on social media, I had countless people messaging me asking if it was real (or whether it was my face Photoshopped on somebody else’s body). The answer is no, this was really me. It was supposed to be my friend Chloe‘s costume but she was ill on the night. With the costume left at my house, I thought it was the perfect opportunity to try it on and see what people thought of it. The reaction was strong.

But onto the woman of the hour – it’s Margaret Thatcher! 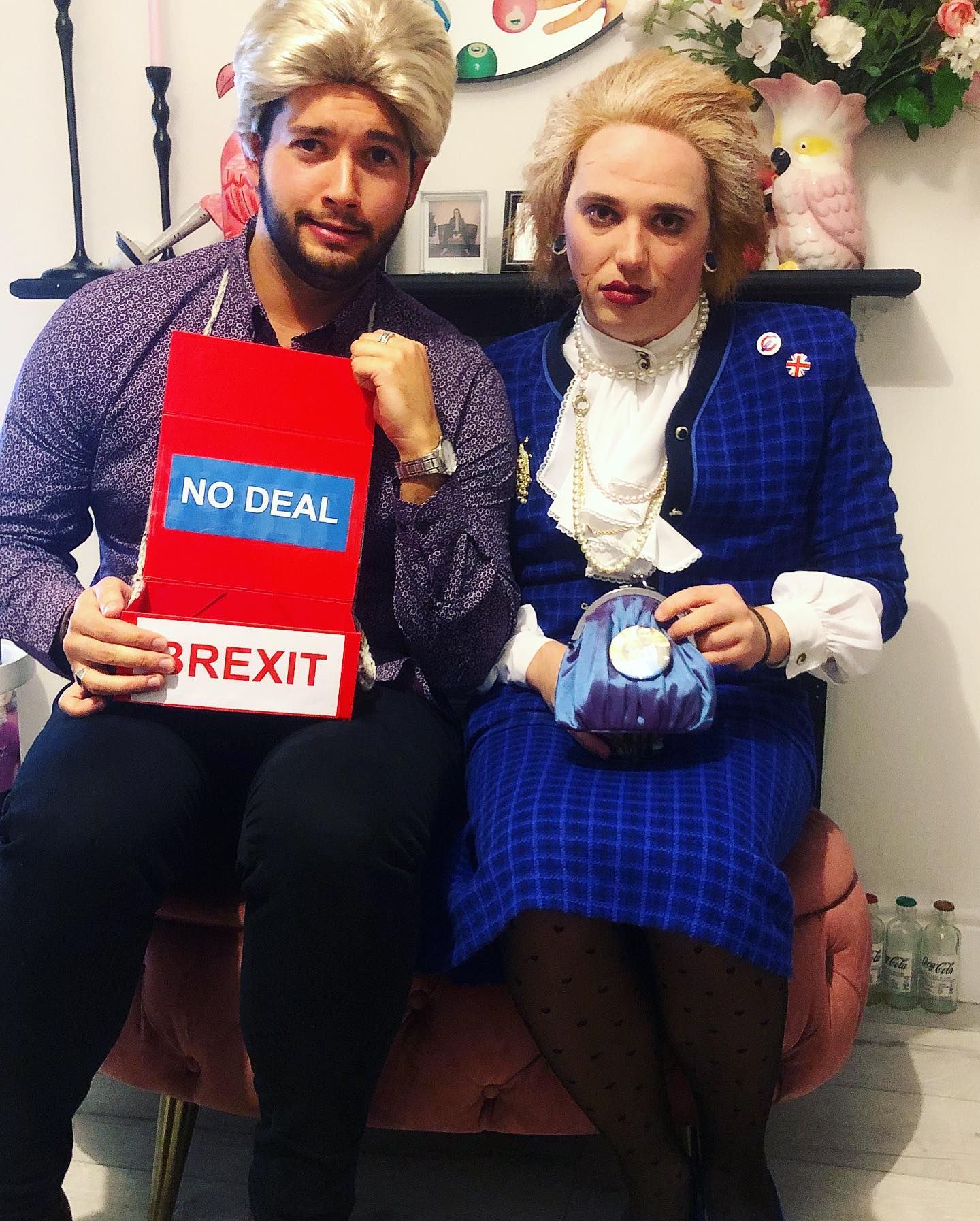 Quelle surprise, this costume was another last-minute decision (the day before I think).

I was on such a strict budget this year so I wanted to buy as little as possible for this. I repurposed the outfit from a Princess Diana outfit I wore at university. All I had to buy was some cheap jewellery and a wig. 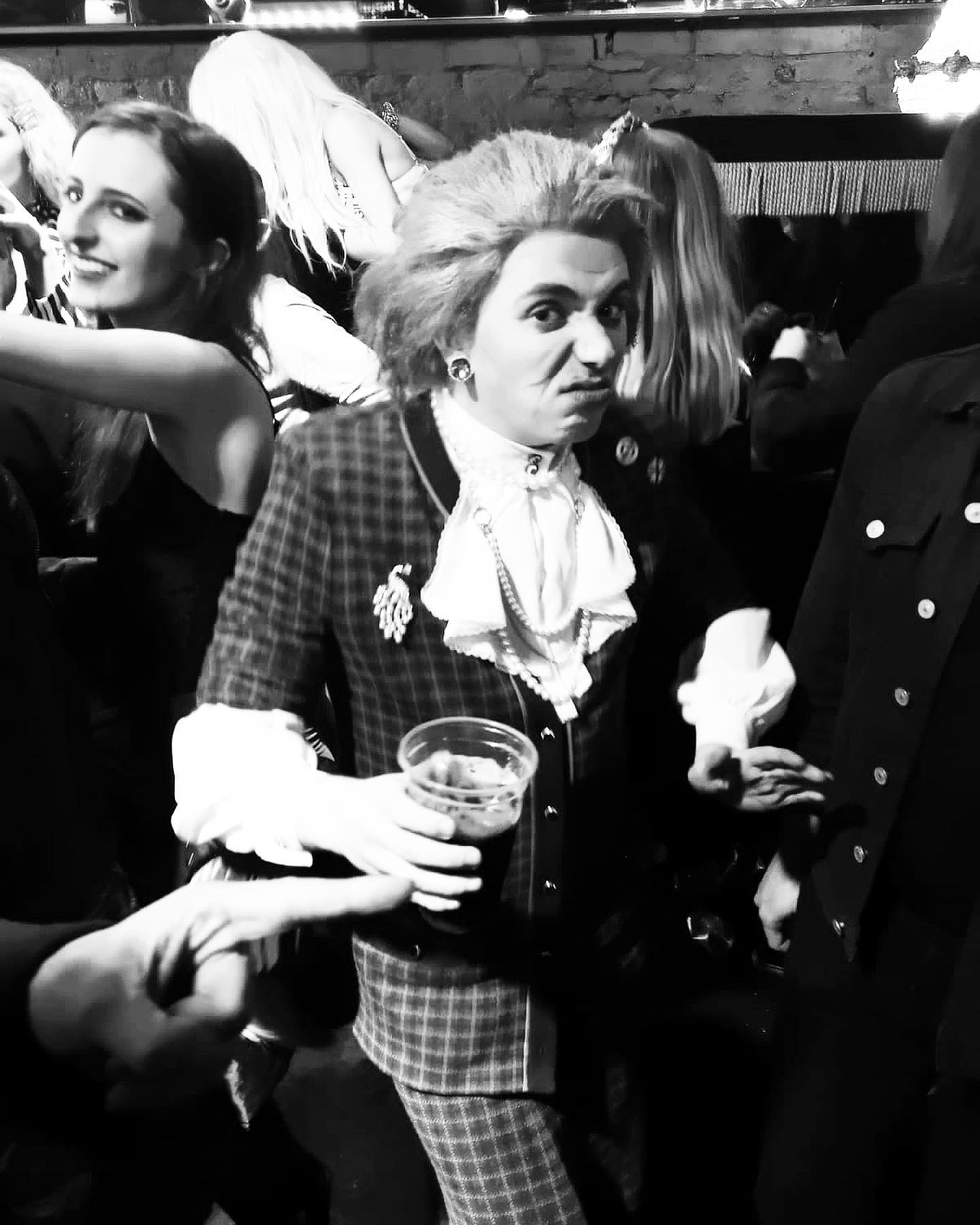 I had numerous people (mainly straight women) confronting me on why I would dress as an “evil woman” for Halloween… because she’s an evil woman you twit! 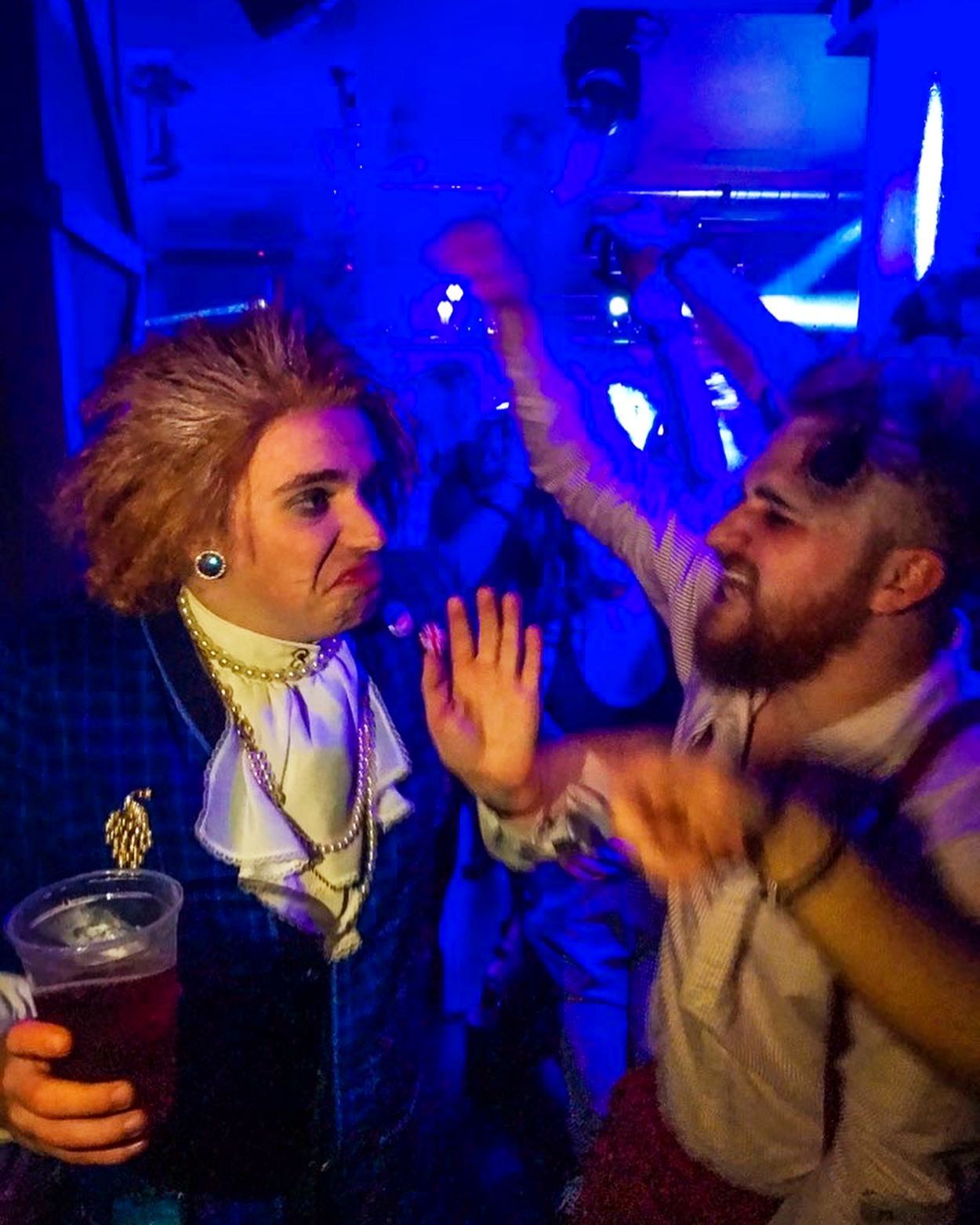 Other than the odd confrontation, people seemed to love it. So much so in fact that Baga Chipz shared it on her Instagram! I honestly couldn’t have been more thrilled with that. 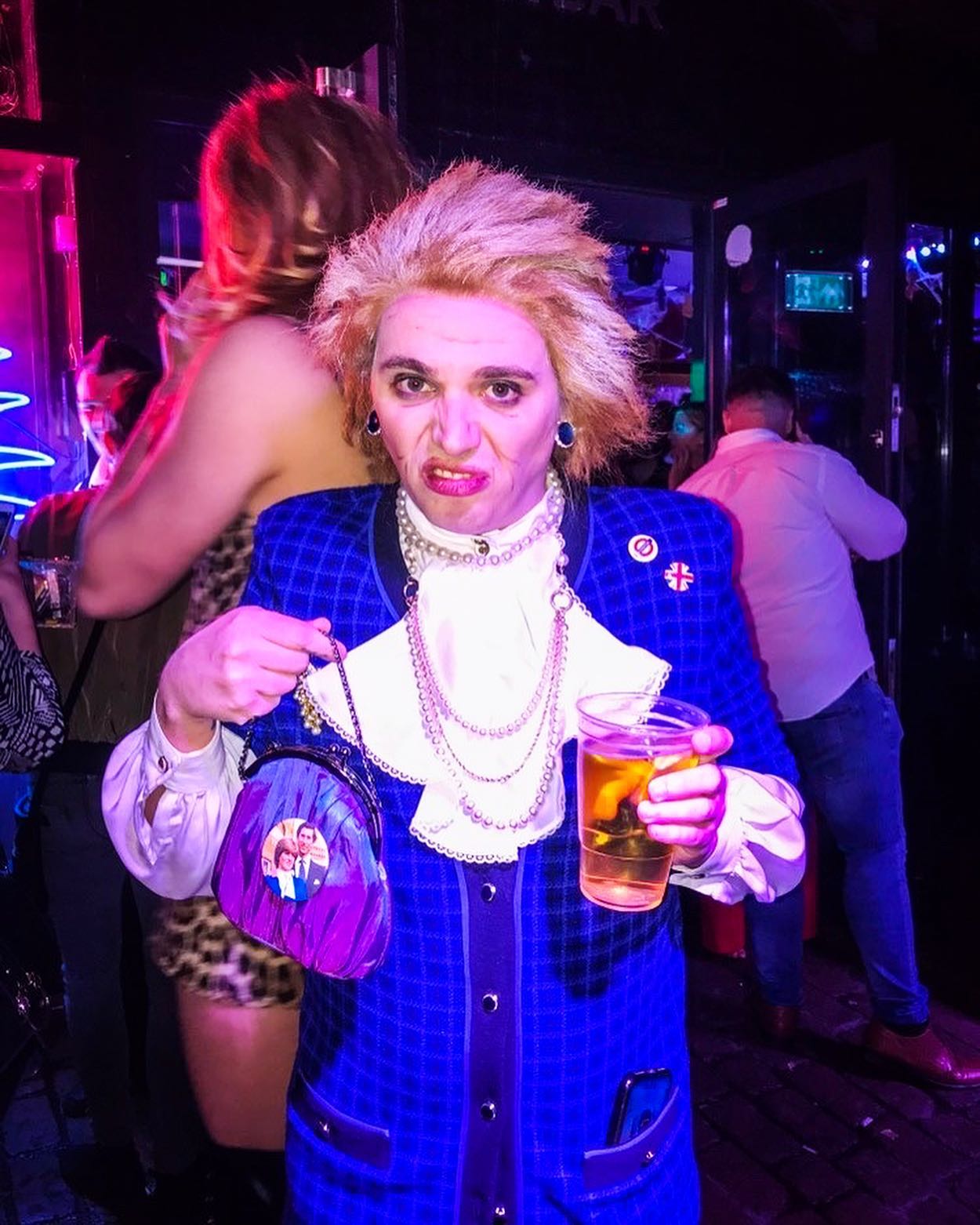 overall I would say Halloween was a top notch success and now I’ve got to try and beat this for the next fancy dress party I have. It’s going to be tough, but I’m sure I’ll think of something. 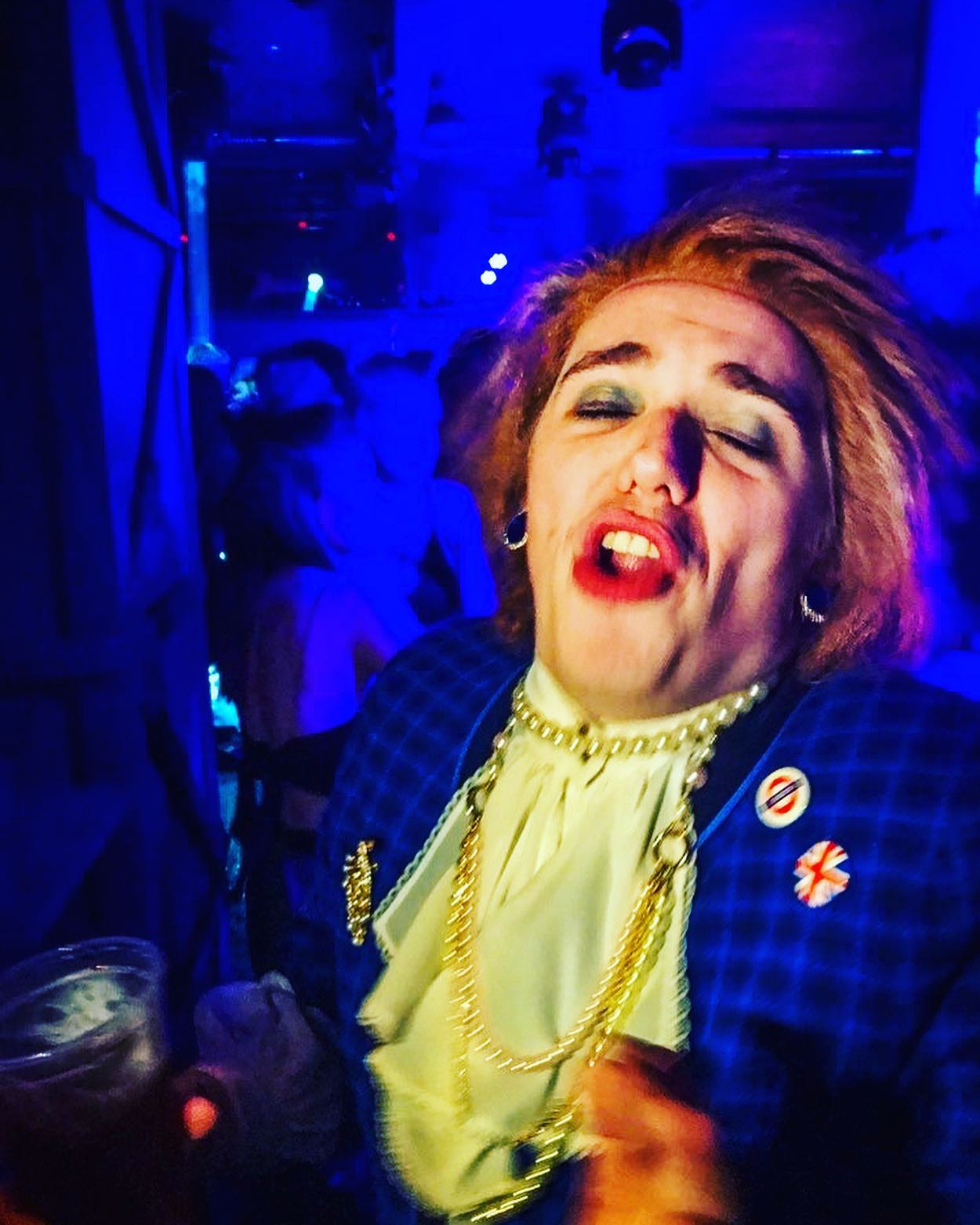 And if not, I’m sure I can just think of another irrelevant or forgotten celebrity moment to recreate.