Quelle surprise, the episode starts with Brita kicking off at Aiden because she felt she should have been in the bottom. Guess what Brita, she was in the top and you just escaped the lipsync. Don’t get Brita – just get better. Still, its time for Brita to put her money where her mouth is because she’ll be acting solo this week for The Snatch Game! 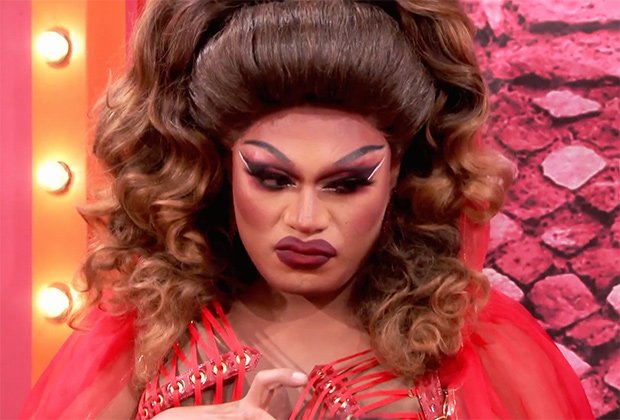 The Mini-Challenge – Zero-PPE Exposure to Vanjie

There wasn’t really a mini-challenge this week. Instead, the queens just had to be in the vicinity of Vanjie yelling, hitting on the queens and offering terrible advice.

Vanjie literally did one of the worst Snatch Game performances of all time. This is not who I would want to receive advice from. Bring out a winner so we can learn some comedy or impersonation tips – this was just an excuse to get Vanjie back in the werkroom… hopefully, this means we won’t have to see her on All-Stars any time soon.

Vanjie wasn’t even bothered about offering advice – I think she was just looking for a new man. Sadly Crystal and Jackie didn’t take to her advances. We also saw Ru looking mighty confused by Gigi’s character choice.

It does bother me a bit when Ru tried to tell queens they have a bad idea without really knowing what they’re going to do. Let them just go with their first choice and if it really is terrible – then try and tell them not to do it.

The Maxi Challenge – The Snatch Game 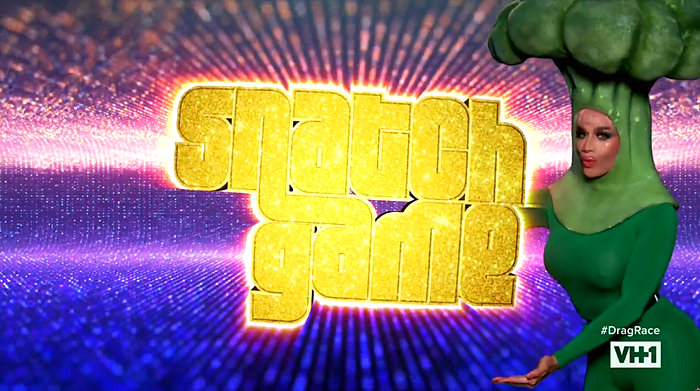 The moment we’ve all been waiting for – Snatch Game is here. But let me just say – fucking hell Ru, you’re really trying to milk a dead cow with this shitty broccoli joke. This is definitely going to become a repeated theme and I don’t want it. They’re trying too hard to create a meme and it’s not working in my eyes. I’m guessing they’ll have Dahlia wearing this bloody broccoli outfit to the reunion too. But let’s not let that ruin the show – let’s see how the queens did! 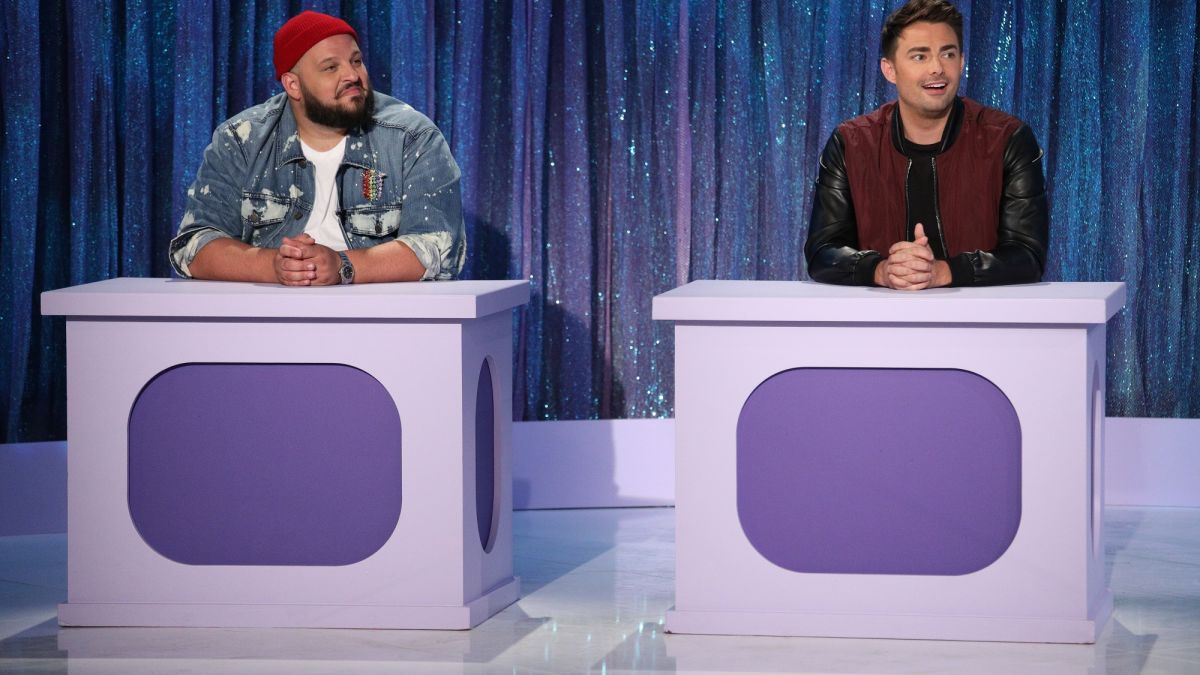 The queens would be performing for two of my teenage heroes. It’s an absolute gay dream spectacular with Damien and Aaron Samuels from Mean Girls. Will any of the queens make a Mean Girls reference? Let’s see!

I’m going to Toot or Boot the queen’s performances but I’ll also give my opinions on their visuals. 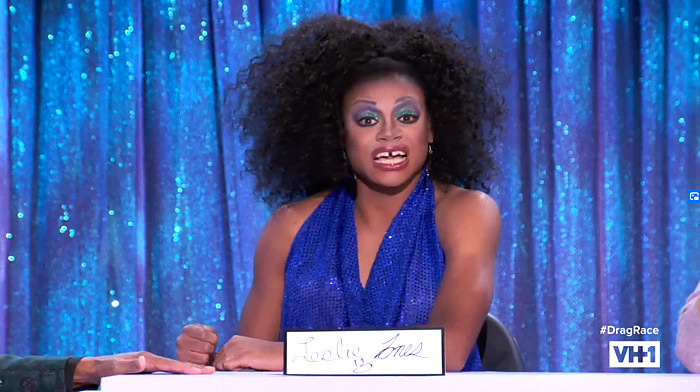 This was pretty forgettable. I’m a huge fan of Lesley Jones and I don’t think she embodied her at all. If it wasn’t for the fact Lesley wore that top on the show, I honestly wouldn’t have known who this was supposed to be… Why didn’t she do Octavia Spencer?! 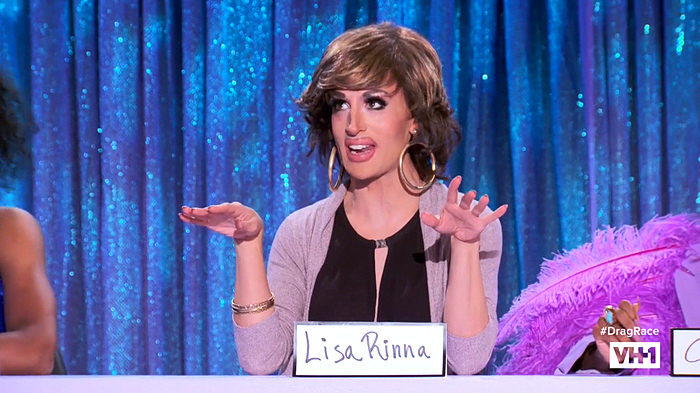 Jackie absolutely killed me with this impression. The characterisation was spot on and the jokes were hilarious. This was by far one of the best Snatch Game performances.

A huge miss. The outfit was great but there was nothing Cardi about this performance. Not only that, but it wasn’t funny. 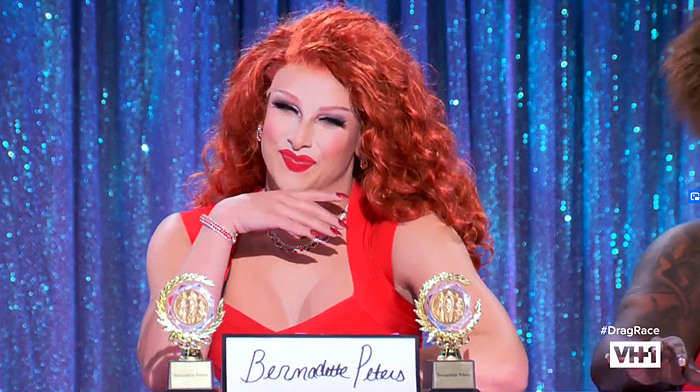 The look was great and the voice was pretty accurate but again, there weren’t any humorous moments here. We know Jan can sing… so why didn’t she belt out some notes during her answers? That would have elevated her performance. 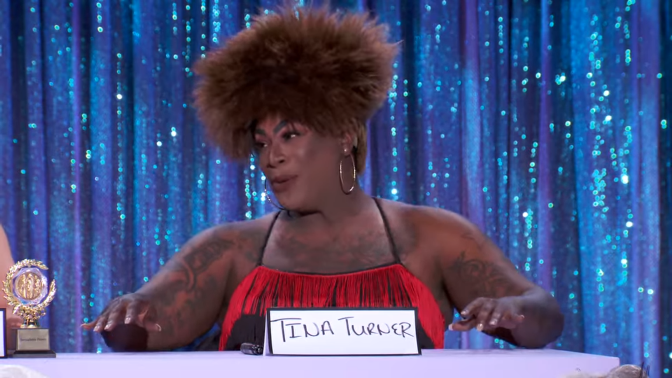 It’s a bold move to do two characters on Snatch Game… especially when both were forgettable. Tina bared no resemblance to Tina. Here’s the thing – if you’re going to do a character that’s already been done you’ve gotta make it funnier. Remember when Derrick did Britney? There was no way that could have beaten Tatiana. This was not as good as Shangela’s Tina. 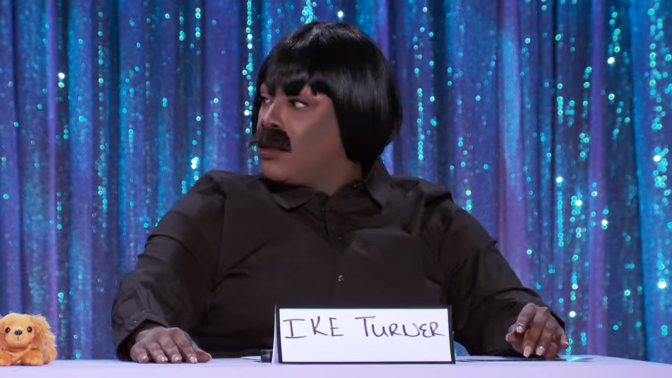 She also did Ike… This was also forgettable. 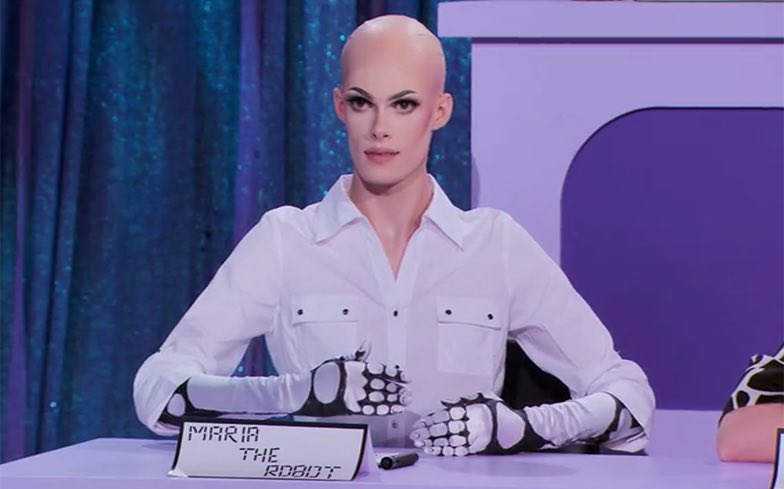 Gigi did a great job here. I guess she’s not just a look queen. She had a whole heap of jokes, funny moments, and a great look. I wish she’d have had some sort of wire headpiece thing for the back of her head but other than that it was great. When she started with “What’s up, bitch?” I knew I was in for a treat. The swearing and struggling to pick up her cards really made me laugh. A really clever and brilliant way to do Snatch Game.

Eep! This was dreadful. The look was pretty good although Patricia is known for her Cheshire Cat grin and I don’t think Aiden smiled once. She’s also got a British accent and Aiden didn’t even attempt that. Straight up, you know a Snatch Game performance is bad when the person you’re impersonating publicly slams it. I don’t blame Patricia – she made her out to be a crack head. Patricia has been very vocal about how much she hated this performance. 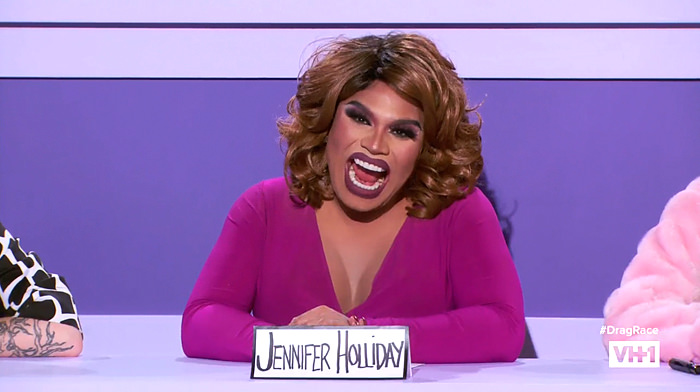 Talking about flops, this was also painful to watch. From what I gathered from Brita’s performance, Jennifer Holliday has lockjaw and nothing else. 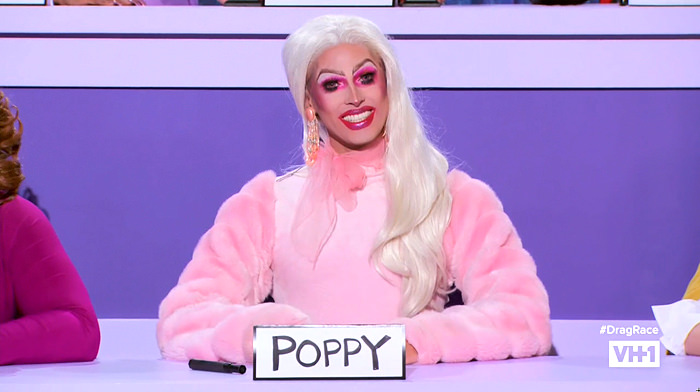 I liked the idea of picking a niche character, it worked for Jinkx Monsoon! But Crystal couldn’t really land the jokes. It felt like she was in the area of a joke but just took a wrong turn. The outfit was cute but I didn’t really get Poppy from it. The wig was a bit messy but I enjoyed the eye makeup. 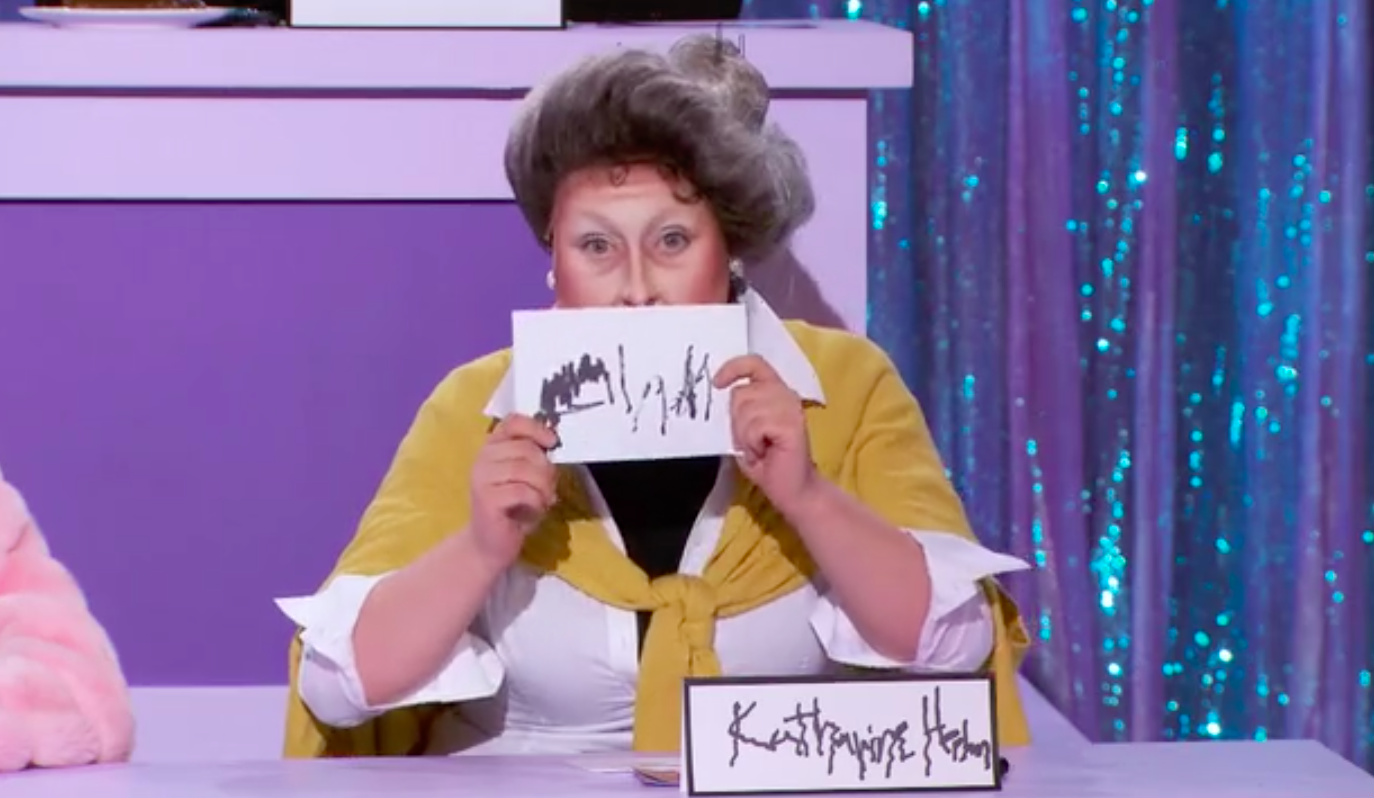 This. This is how you do Snatch Game! Honestly, Sherry had me in absolute stitches (and I know that pains a lot of you to hear). The shaking of the head, the illegible handwriting, and the wandering tales were all sheer perfection. She also looked spectacular as Katherine Hepburn. I love a queen that can slay an old legend. We had Alaska as Mae West, Dela as Maggie Smith, Jinkx as Little Edie, and Alexis as Liza (to name but a few). I think there’s something incredibly talented and fascinating about seeing a queen know an old legend and know how to create humour from them. 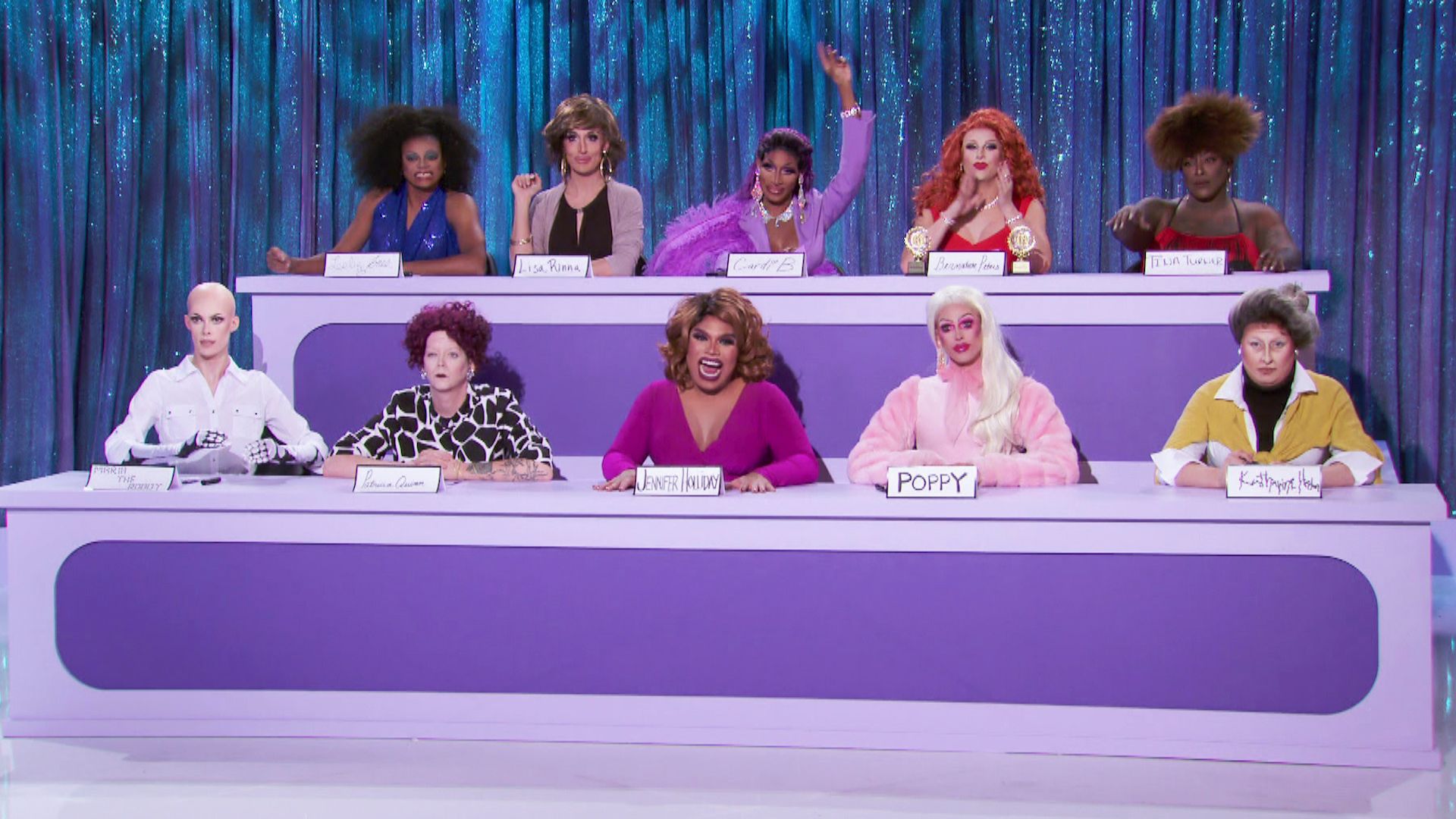 And that’s Snatch Game wrapped up. But before I move on, did anybody else notice that RuPaul is getting a bit filthy these days? He mentioned a big black cock to Gigi and I’m sure it’s not the first time he’s upped the sex jokes this season.

Inspired by the broadway musical (and hit film) Frozen, the queens had to come in their best icy winterwear.

I thoroughly enjoyed this. It wasn’t necessarily groundbreaking but the oversized fur hat killed me. Matching the oversized jewel on the muff and the hat was a great detail. The coat was beautiful and I loved the furry feet warmers. I do wish she was wearing boots instead of heels though but that’s my only critique.

I don’t think this was Jackie’s strongest look. It wasn’t bad, but it just didn’t thrill me like some of her other looks. The one thing I did like was when she put her hands together, the sleeves and breast piece looked like a giant snowflake. I wasn’t a fan of the wig or the makeup however. 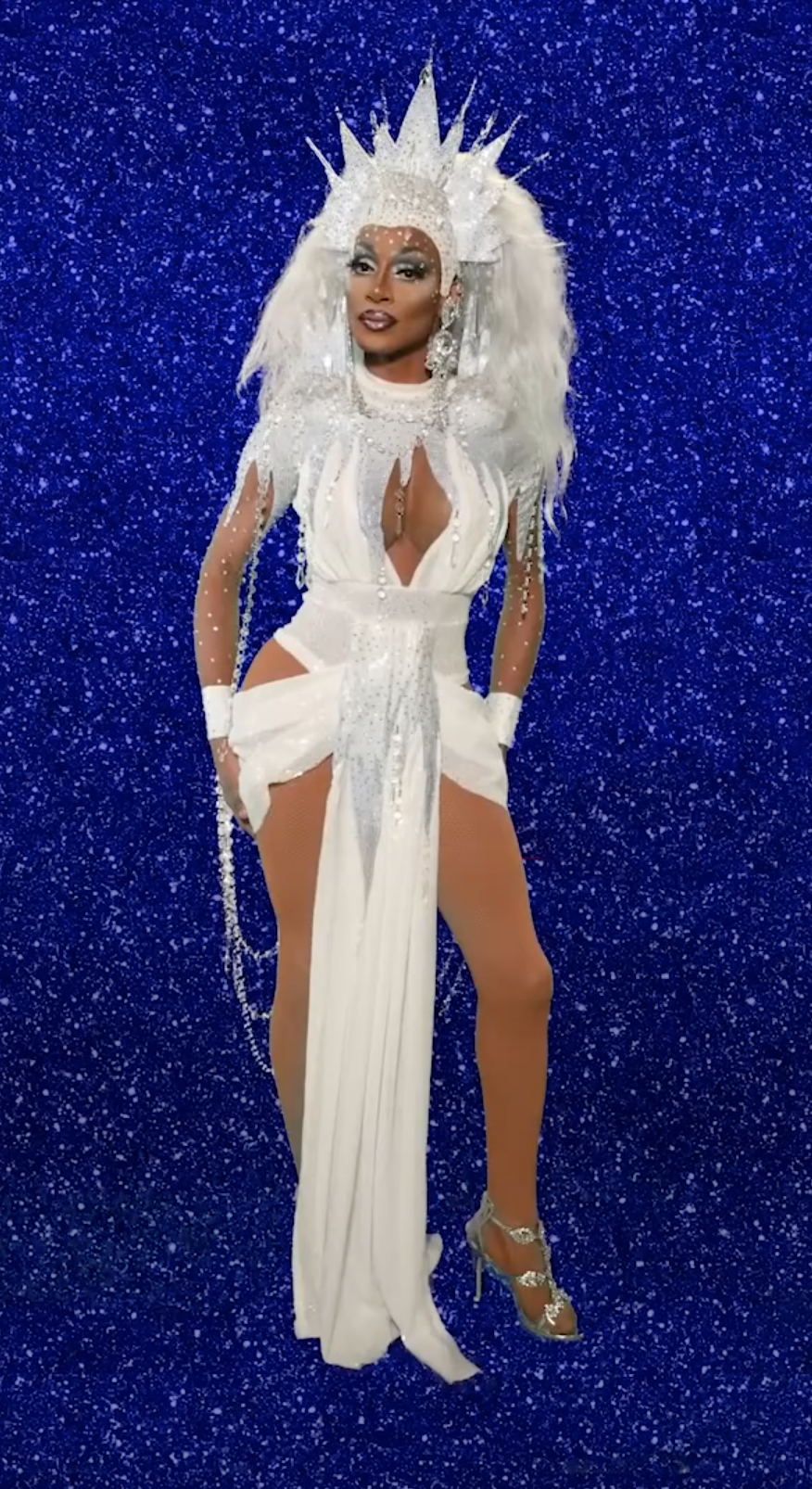 Ice queen. The wig and headpiece look beautiful, the makeup is beat and the outfit is sex personified. 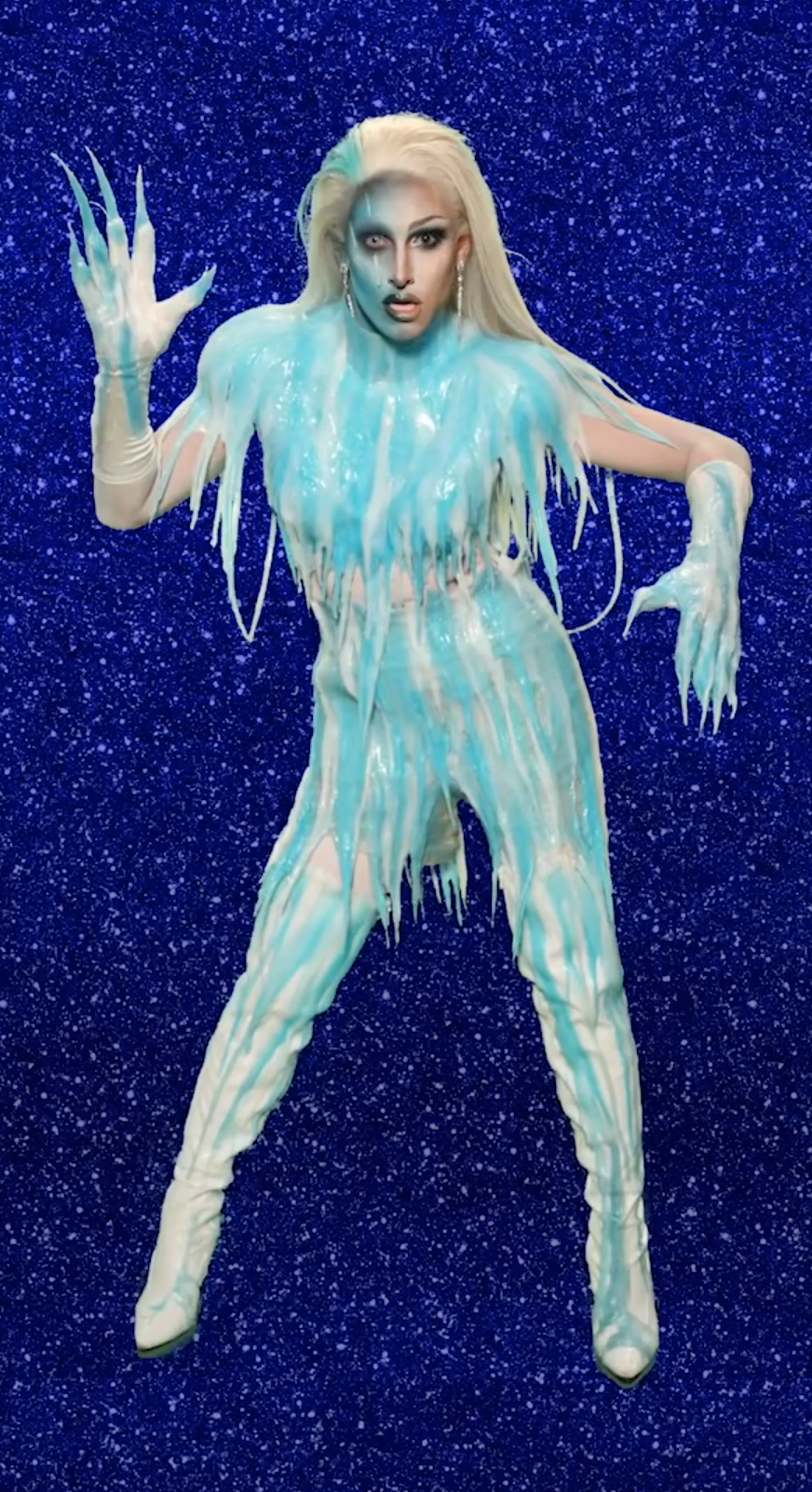 I really enjoyed this. Remember that episode of The Simpsons when Jasper froze himself in the Kwik-E-Mart freezer? That’s what this reminded me of. It also looked like the sort of striped carrier bags you’d get from a fishmonger. The makeup was great and the outfit looked really modern and cool – a great look from Jan. 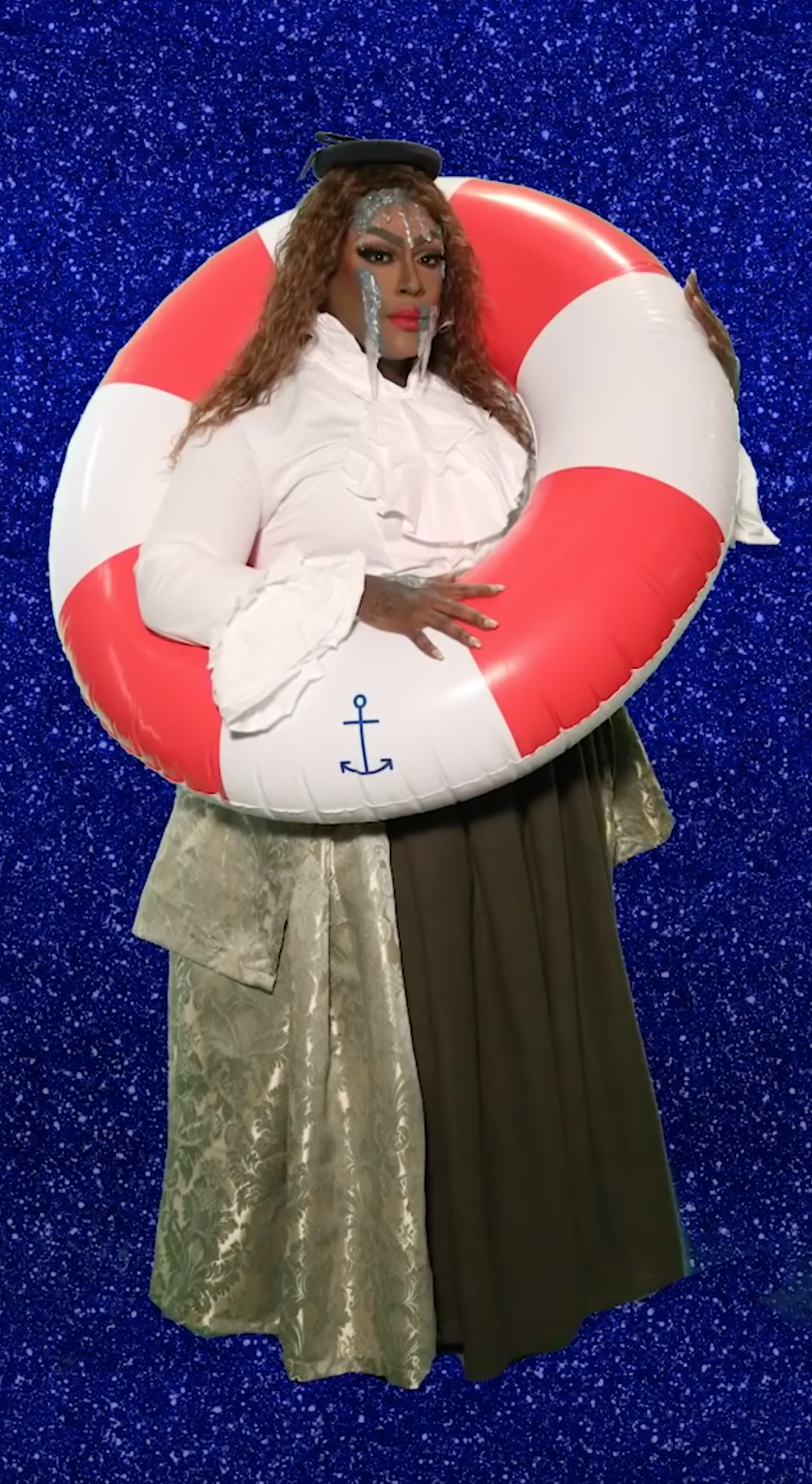 I thought the idea was fun but the execution was pretty piss poor. It would have been funnier if she made the whole outfit look wet or did a nude illusion with the ‘Heart of the Ocean’ necklace. I think it was a good concept with a week delivery.

This was pretty simple but it was really effective. I have no idea where she managed to get the giant Ice Cream but the look was cute. The frosty wig and the little red nose was a great detail. 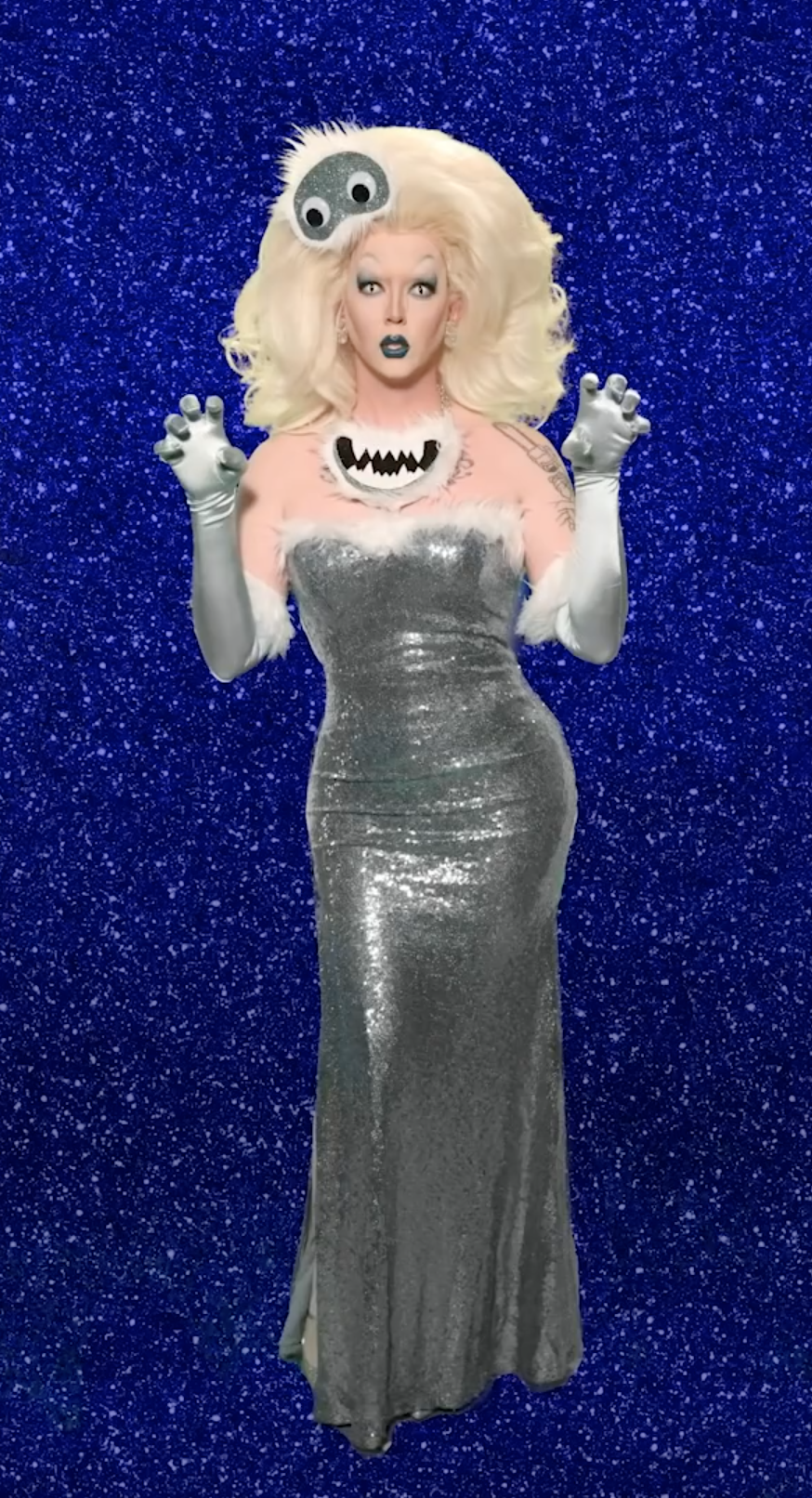 I don’t hate it but I don’t like it enough to toot. Remember when Manila Luzon did Big Bird? This felt like a lesser version of that. Her figure looks great though but it was a shame that the outfit was basic. 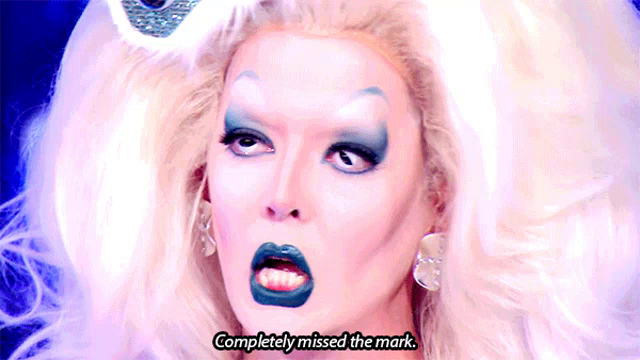 The show did another shady zoom-in and I’m kind of living for them this year. Aiden’s look definitely took a turn when they zoomed in on her pissed cat eyes.

I’ve gotta be honest, this was kind of beautiful. The colours are stunning and I loved the stole with the matching trim. The colour didn’t really give me a ‘frozen’ vibe but I did enjoy it. The shoulders reminded me of Alexis Michelle’s promo look – then I found out it was the same designer.

Jack Frost is in his most opulent nightwear. I adore this look of Crystal’s. The oversized flared pants are stunning, the ice-white smoking jacket is stunning (with the matching sleeve details for the trousers) and the slick wig looks editorial. This is a great look for Crystal.

This is killer. It’s like The Penguin and Mr Freeze from Batman had a sinister lovechild. The slick wig looks great and her makeup is stunning here. This was a challenge to find an image as this was the first episode where the show decided not to showcase Sherry Pie’s runway.

Either cut her out of the show entirely or don’t – the runway is literally the one part where she’s showcasing the talents of a designer so it seemed odd for this to be the only part they edited out.

Gigi came through as the victor this week. Honestly, I thought Sherry Pie was going to win – her Katherine Hepburn had me in absolute hysterics. Gigi did great too so I’m not too miffed. Jackie was also great and it would have been nice to see her win a challenge, but I think it was fair for Gigi to get it this week (although I still preferred Sherry’s performance).

The bottom 3 was Crystal, Brita, and Aiden. Honestly, I’m surprised Jaida skirted this because her Cardi B had zero resemblance in terms of an impression. Snatch Game isn’t about looking like them – first and foremost this is an impressions challenge and Jaida just played Jaida… but slightly drunk looking for some reason. 🤷🏻‍♂️

I know people keep saying RuPaul is giving Gigi favouritism but honestly, I think that’s happening with Jaida too. But hey, Crystal skipped the lipsync leaving Brita and Aiden to battle it out. This was the moment we’ve all been waiting for – will David slay Goliath? Will the underdog beat the bully? No.

The Lipsync – Let It Go by Caissie Levy

We all wanted to see Aiden come through and obliterate Brita – but it wasn’t meant to be. Brita successfully out-performed Aiden. It was a shame that the lipsync was a bit lackluster because the show went all out. They had fake trees, a snow machine, icy lighting, and a broadway hit song. Brita did a little magic trick which didn’t go too successfully. I would have just had cans of hairspray and pretended they were magical icy sprays. Still, the judges seemed to live for it.

With that, we saw Aiden sashay away and I can’t say I was particularly shocked when it happened.

Ah Snatch Game, I knew I’d managed to pick some funny queens for this challenge. However, with Aiden going home I only gained 4 points. Tom had a bit more luck and got 6 points. That takes Tom’s total to 28 points and I am still in the lead with 42 points. Widow is on 11 points. 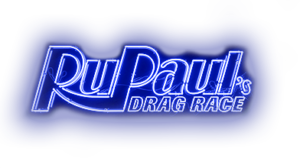