RuPaul’s Drag Race All Stars 5 Episode 3: Get a Room!

Two queens down, seven to go. The competition is hotting up (sort of, it’s been a bit boring so far). Can this week’s ‘Get a Room‘ challenge be any better? *Spoiler Alert* No it cannot.

The Maxi Challenge – Get A Room!

The queens were split into groups by RuPaul. There was no challenge to decide who gets to pick first or anything like that. It a producers decision which kind of annoyed me. We know reality TV isn’t real but at least try and pretend that a competition reality show isn’t fixed if you please. Anyway, Ru paired up Mayhem and Blair, Jujubee, Alexis, and India and the final team was Mariah, Shea, and Miz Cracker.

They had to create a theme, decorate and create their masterpiece before presenting their creations to the judges. Would we have another moment like Valentina trying (and limply achieving) to decorate her room in briefs and heels? Probably not – that bitch was crazy. 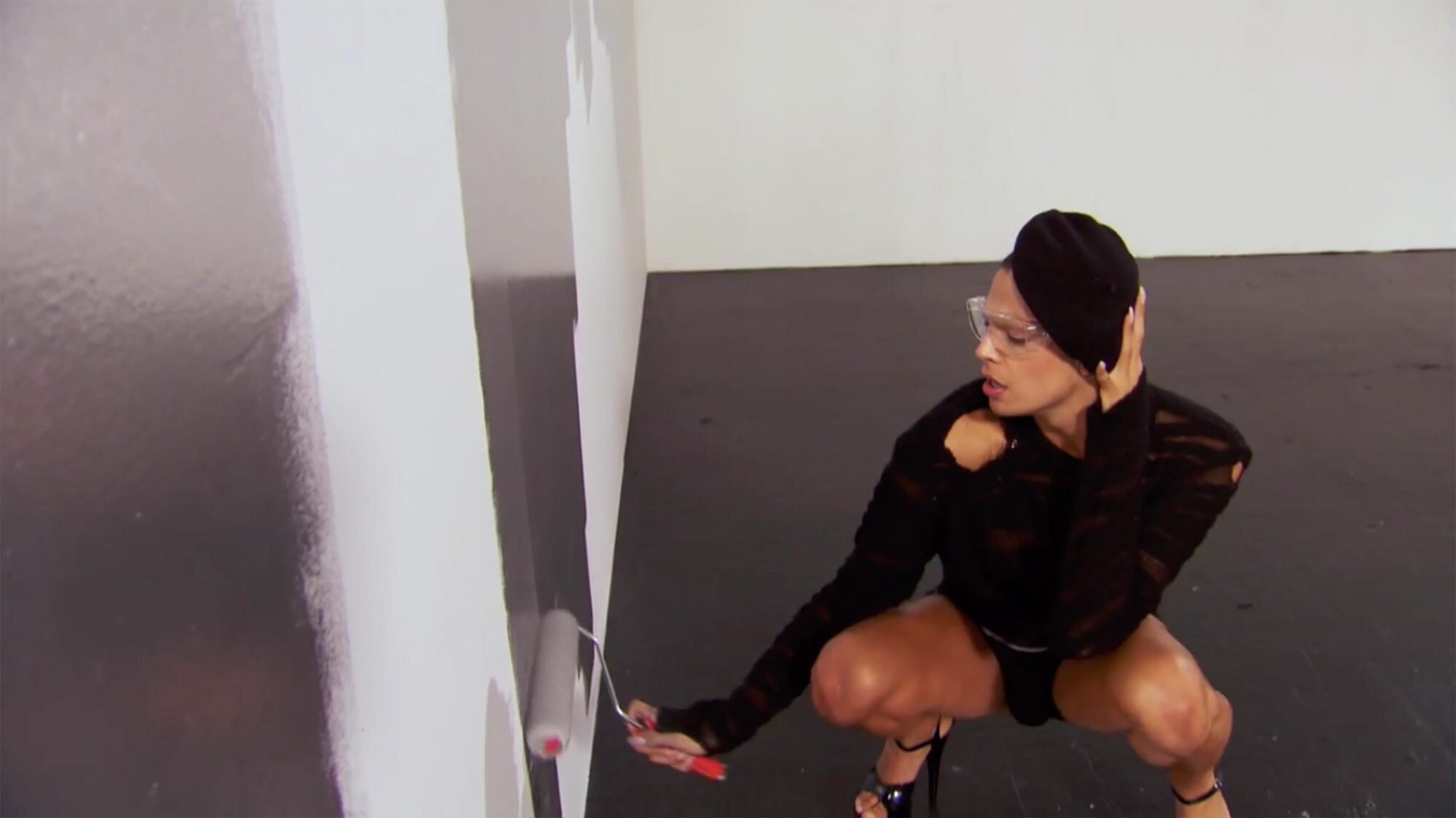 We did have one funny moment where Mariah went to observe the other queens’ rooms and she daubed some of her pink paint onto their green wall – playfully, but shadily.

Get a Room – The Presentations

I honesty was so bored during this challenge so prepare for a pretty quick roundup this episode. 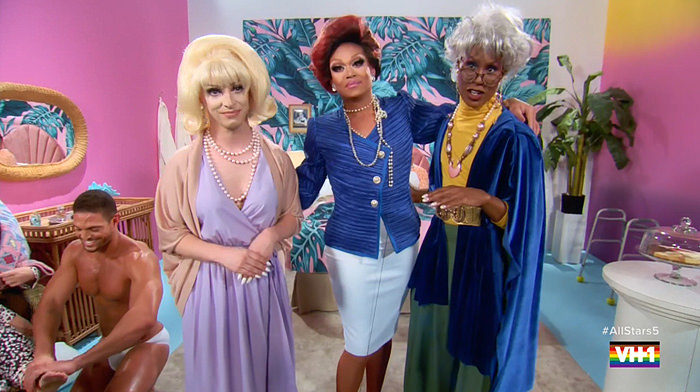 This was fine. They had some good Golden Girls references in their performance and the room looked pretty good. It was, however, a tad boring. This whole challenge was pretty forgettable so I honestly couldn’t tell you much about each team. I feel like Cracker had the funnier performance out of the three, but honestly, who knows. 🤷🏻‍♂️ Actually, Mariah didn’t do a particularly bad job, she had some funny moments. I think Shea fell flat in this challenge.

This was very Cheetah Girls and tacky… and I’m not mad about that. The mosquito net bed was funny, the golden shower didn’t really make sense but hey, it’s a sex pun I guess. 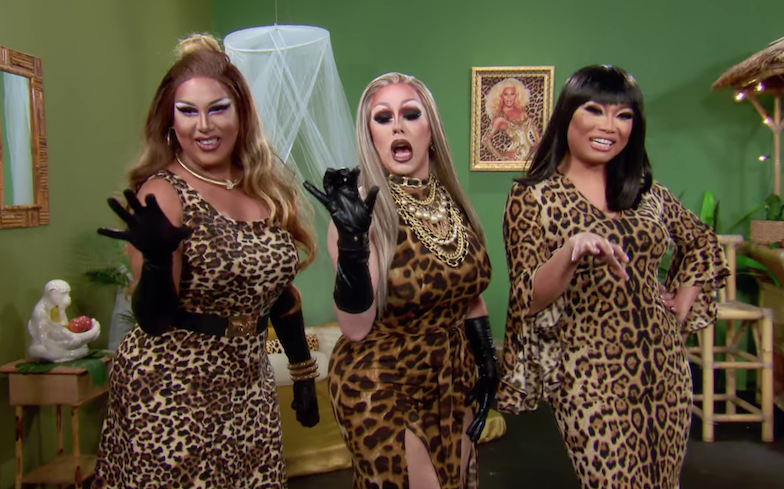 They all looked like hooches on a night out and it was a bit ‘meh’. Jujubee had some funny moments and she was definitely the scene-stealer in this performance. India just looked awkward throughout the whole performance. Alexis was fine I guess. 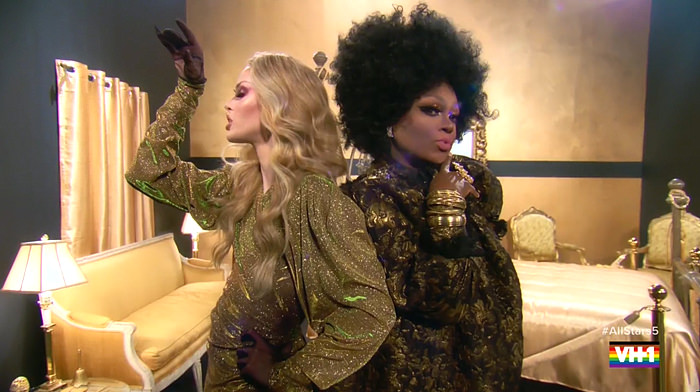 It certainly was the overall best of the bunch but it was just a lazy remake of Club ’96. Mayhem actually did a great job of hosting. Blair, well… she made me cringe quite a bit. I thought Blair’s performance was tragic in this challenge. 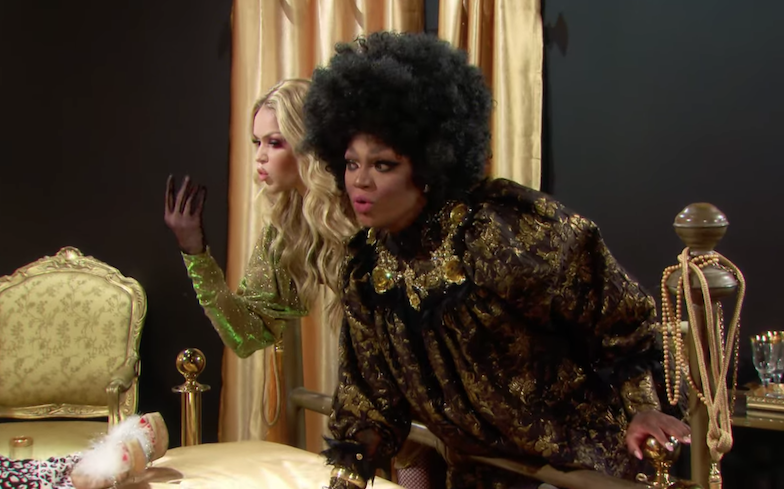 She was just sort of ‘there’ and making shit jokes and trying to do the classically-unfunny ‘act-like-i’m-better-than-you’ persona that has sent many a girl home in the past. All of these groups were boring so I honestly didn’t care that much who wins.

This week the queens had to do that age-old trick that we all love – a reveal. They had to present 3 looks in 1. Sounds like a hoot. But will any of the queens stun us like Sasha Velour’s rose petals (sorry for the trigger, Shea) or will it be more like the butterflies and the rest of the obvious shitty moments of the season 10 finale? 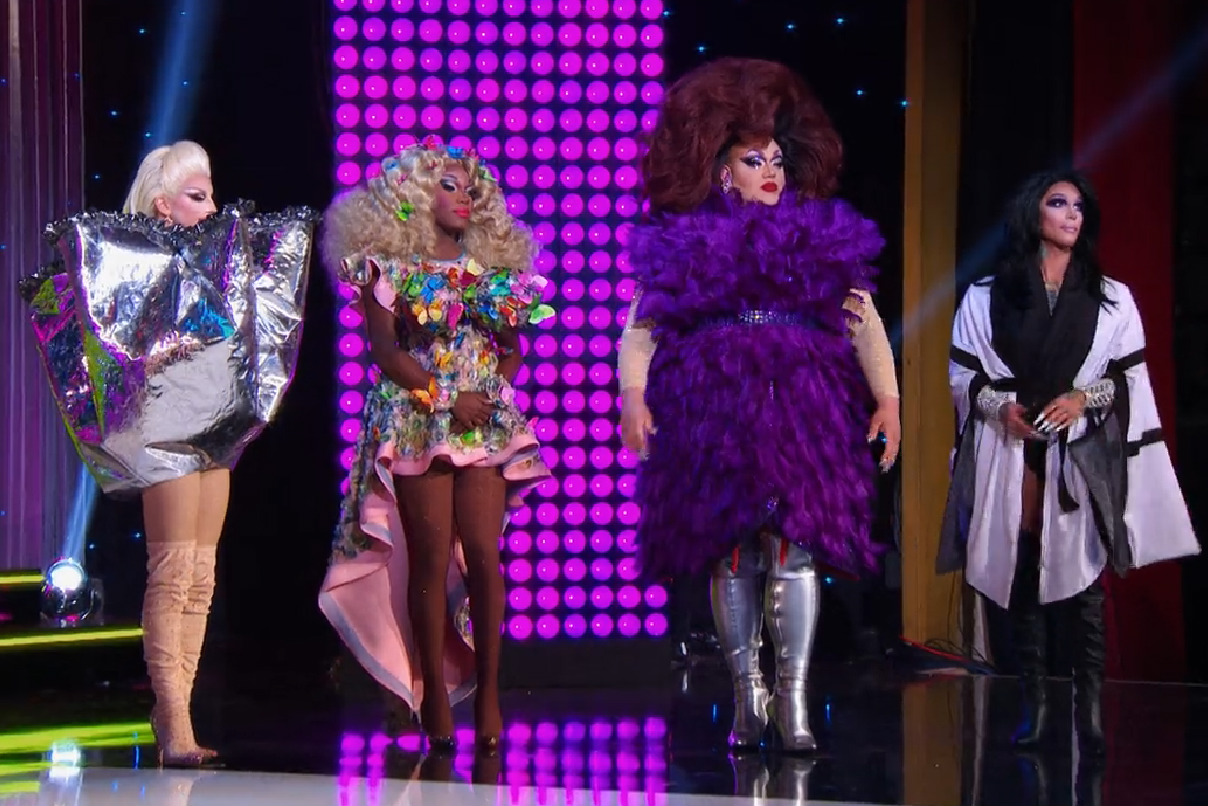 That’s right, the picture is bringing back all those traumatising memories of pure underwhelming boredom. I’m sure most of you blocked this from your brain. But a reveal should be ‘revealing’. I want to be excited by what could possibly be under each layer. If it’s obvious I’m not interested. 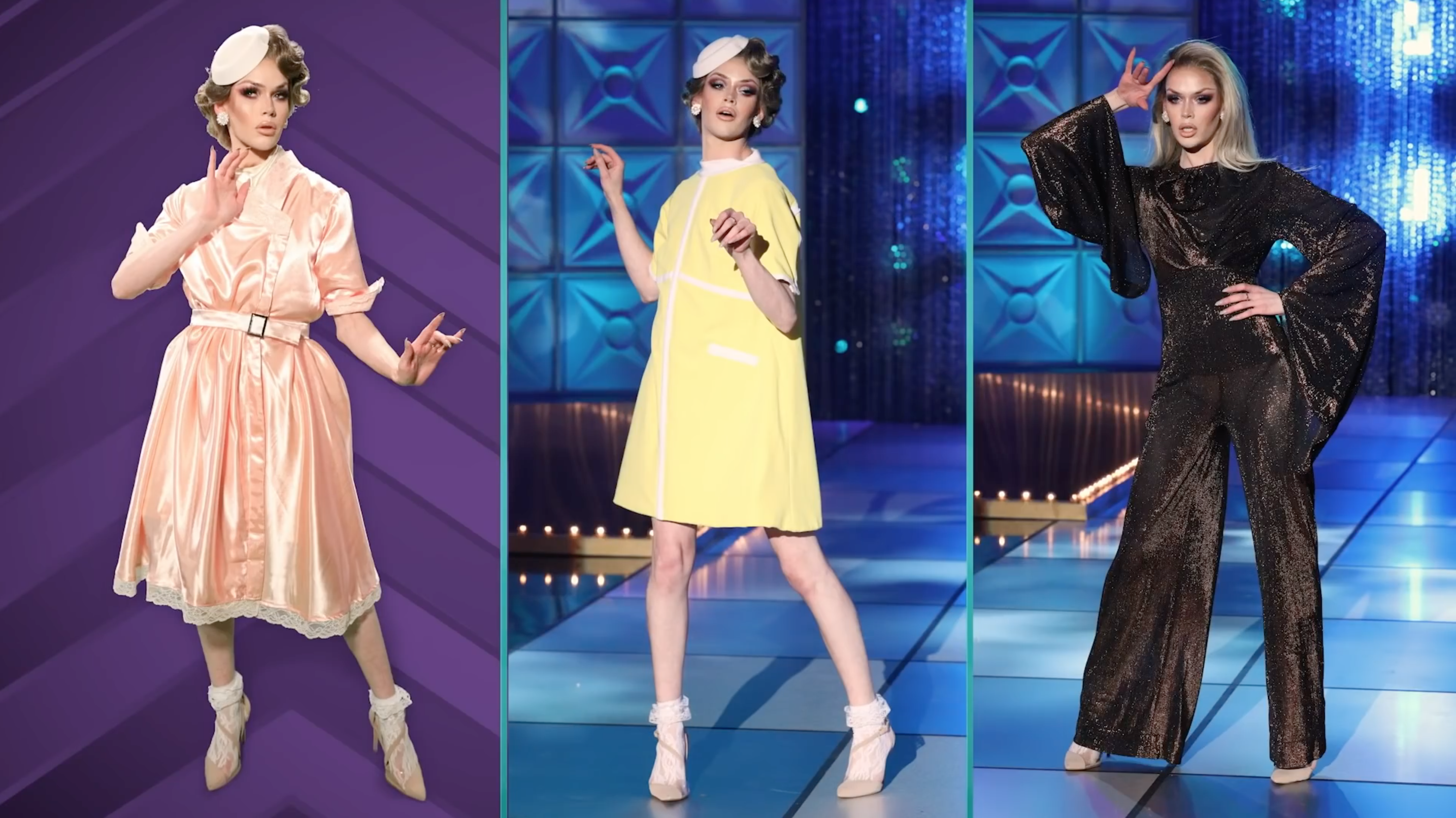 I don’t think they were the best-fitting outfits in the world, but I enjoyed the concept. I thoroughly enjoyed the idea of having 3 looks travel through the decades from the 1950s to the 1970s. Even though it fit badly, I enjoyed her ’60s custard yellow smock dress. I was impressed that she managed to hide a full ’70s disco outfit underneath so props to Blair for that. 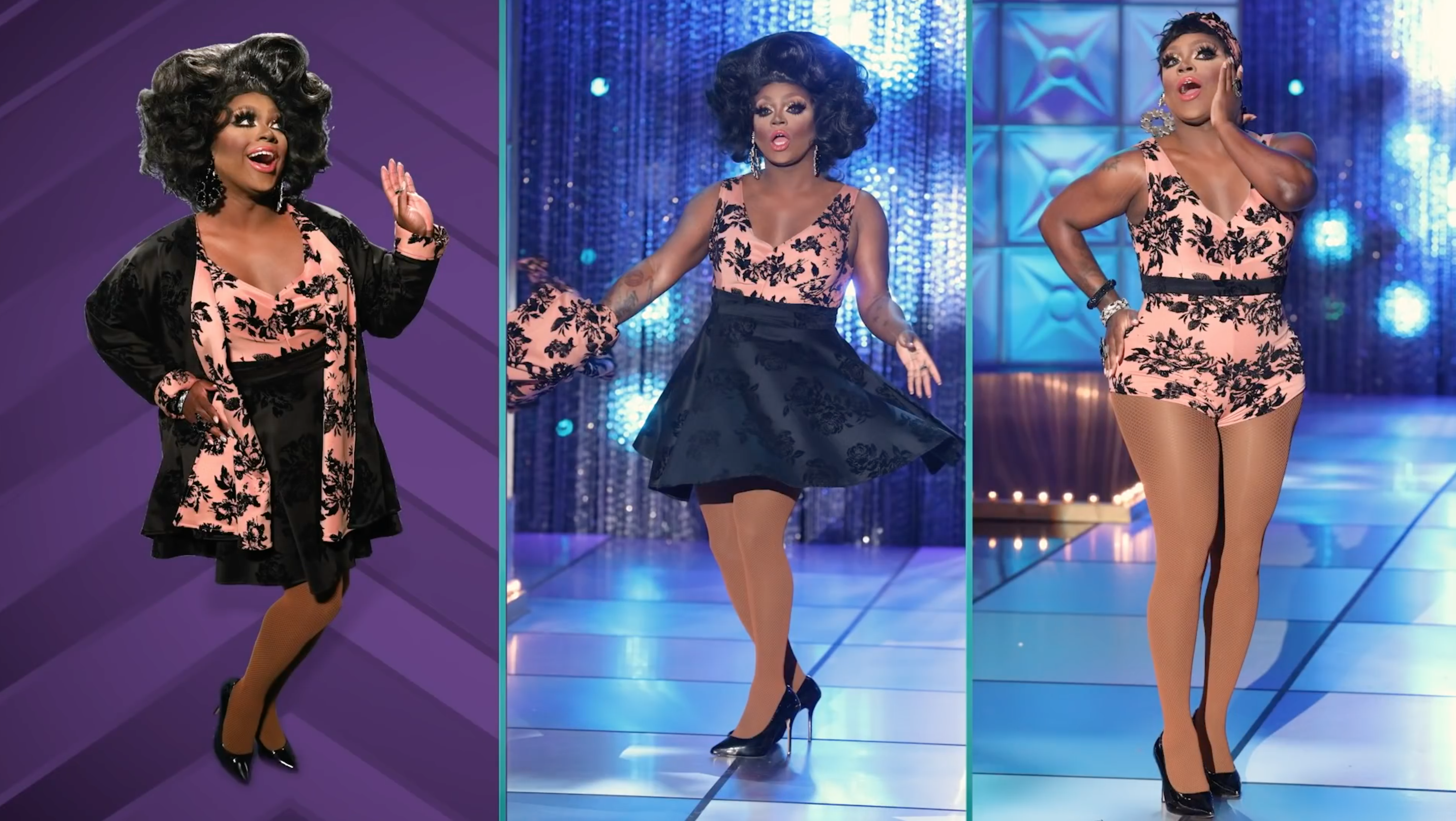 The looks were polished but the concept was a little safe. Granted, each outfit was a fully realised look so I will commend Mayhem on that. However, I wouldn’t necessarily count ‘taking off a coat’ as a separate outfit and for that reason, she gets a boot (but only just). 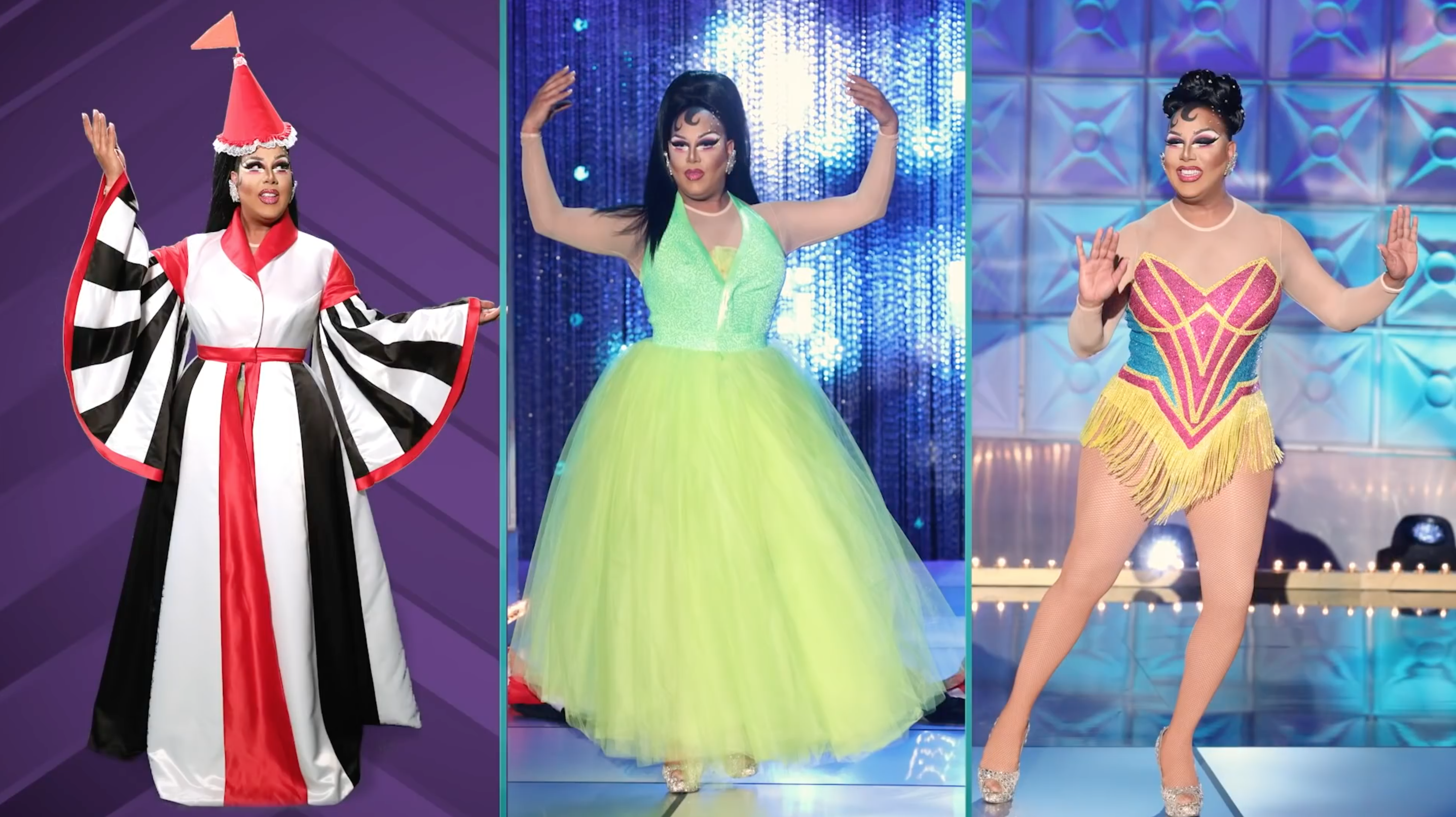 Camp – therefore I like it. Alexis’ circus theme was fun. I loved her first outfit coming dressed as the Big Top tent, the second look was pretty shit and the third one was cute. Overall I think she brought some nice colours and variety to her runway presentation. 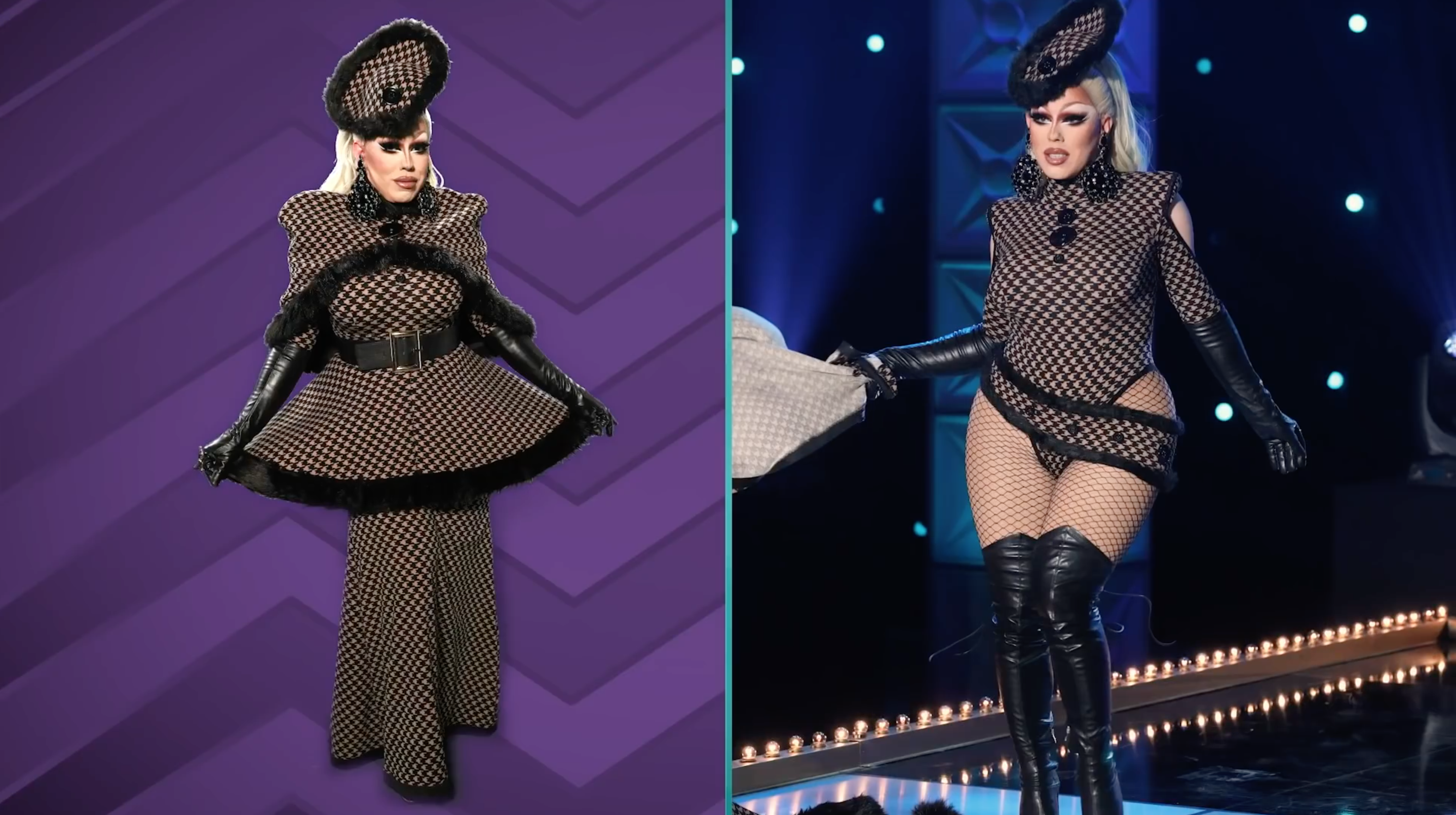 As much as I’m not a fan of leotard or retro pageant kind of drag, I have to give India props because this was a great look. I definitely preferred her first look but the way she kept taking off layers looked great and each version was polished. (But I definitely still preferred the first outfit). 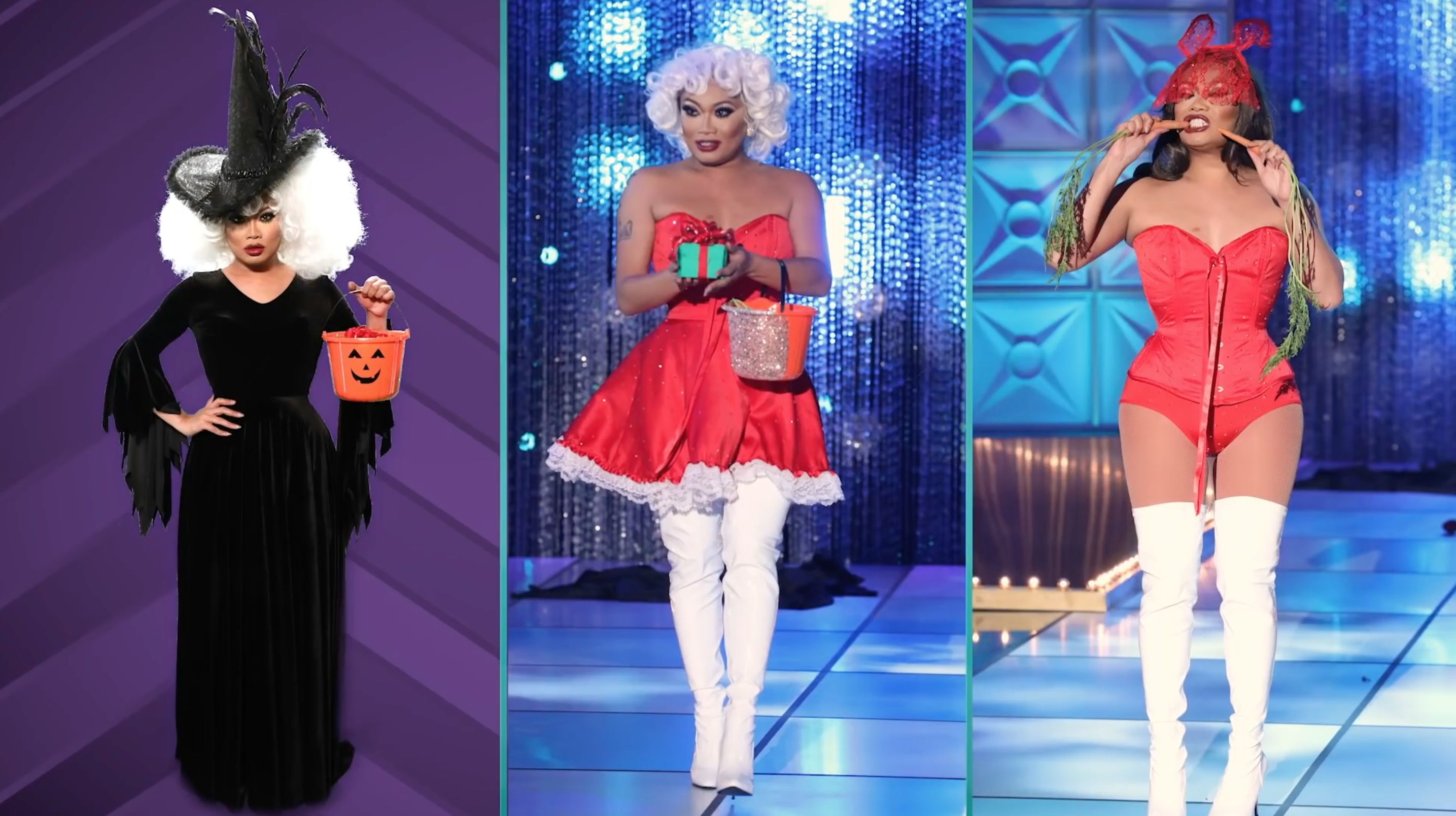 Loved the concept but these were really cheap-looking outfits. This is a boot based on quality but it would have been a toot for the fact she had a fun idea that nobody else did. I loved her Halloween outfit, the big wig and the giant hat looked cute, the dress fit her beautifully but the bucket was a bit bland compared to the one Crystal Methyd had on her season. Turning it around to become a sparkling bucket for her Christmas look. The Easter bunny look was cute too, it showed off her beaut figure and it reminded me of a Playboy bunny. Fun idea, weak execution, unfortunately. Apologies to everybody reading, this was a really long-winded way of saying the outfit was a bit ‘meh’. 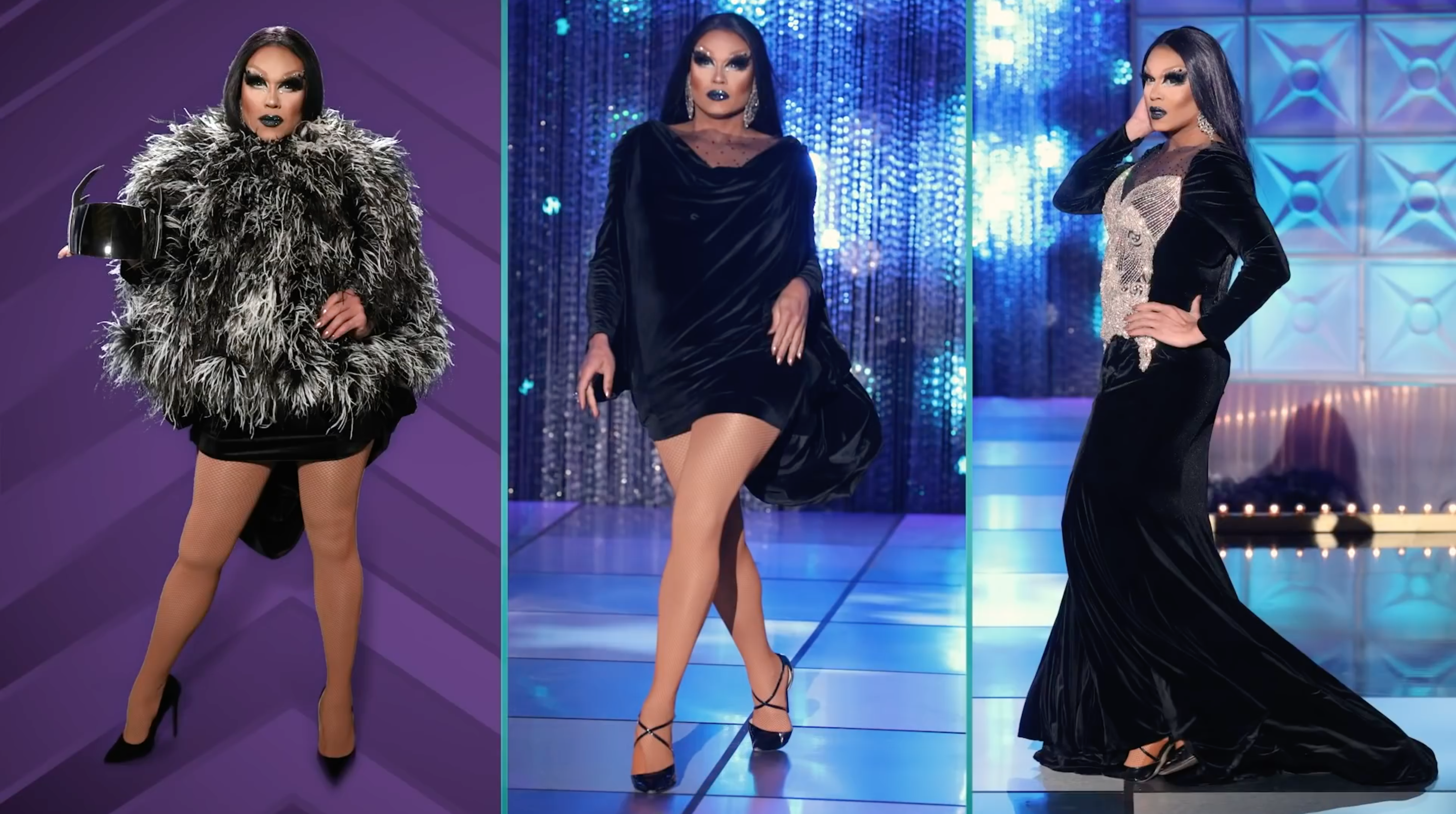 Remember what I said about just removing a coat? Well, throw that comment away for Mariah. Each of these looks felt totally different so I will give her full credit for that. The fur with the visor helmet look was super cool and modern, the part dress underneath was well-draped and beautiful and then she gave us an elegant ballgown underneath. I’m not surprised however, Mariah always knows how to serve a look. 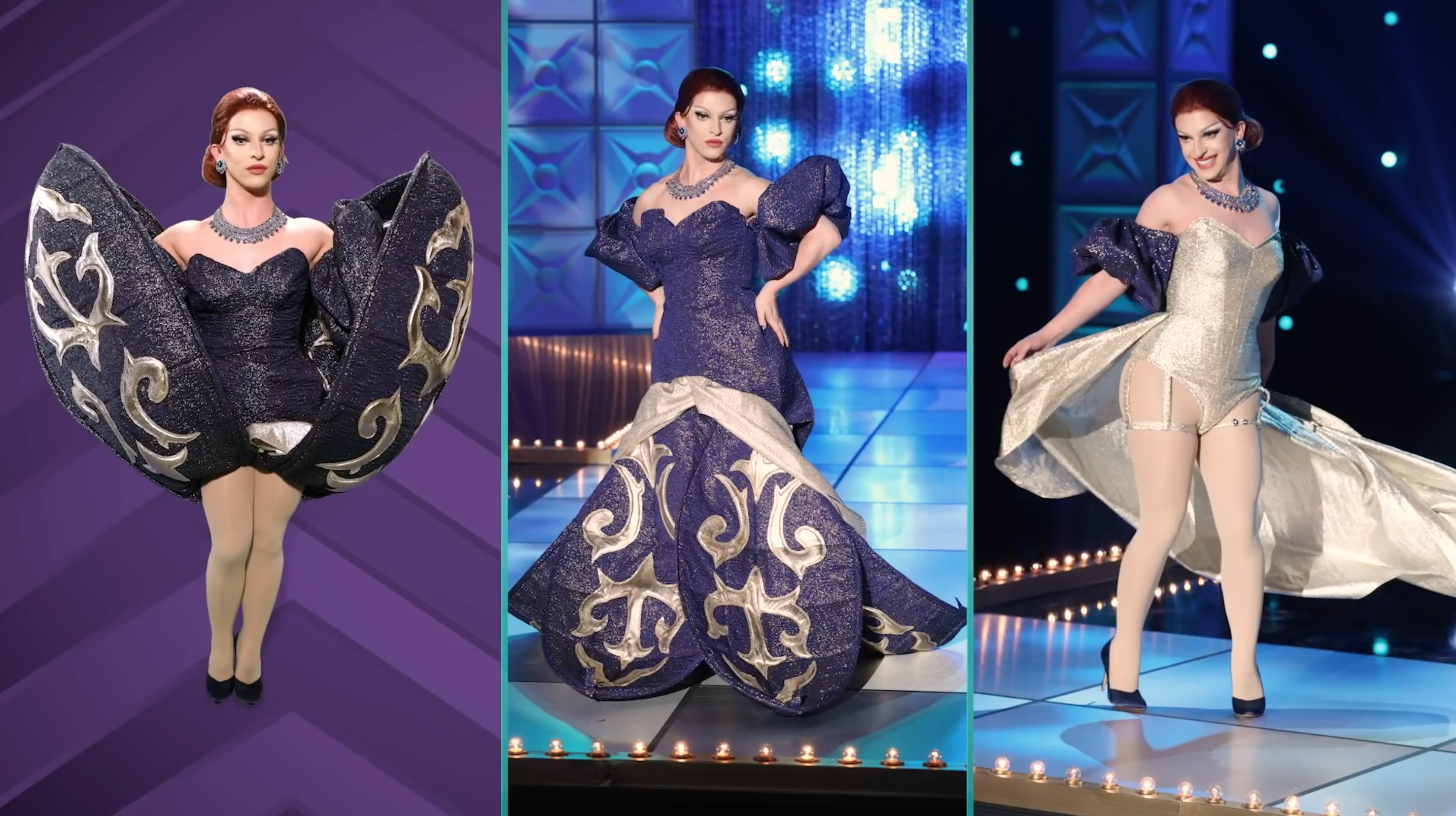 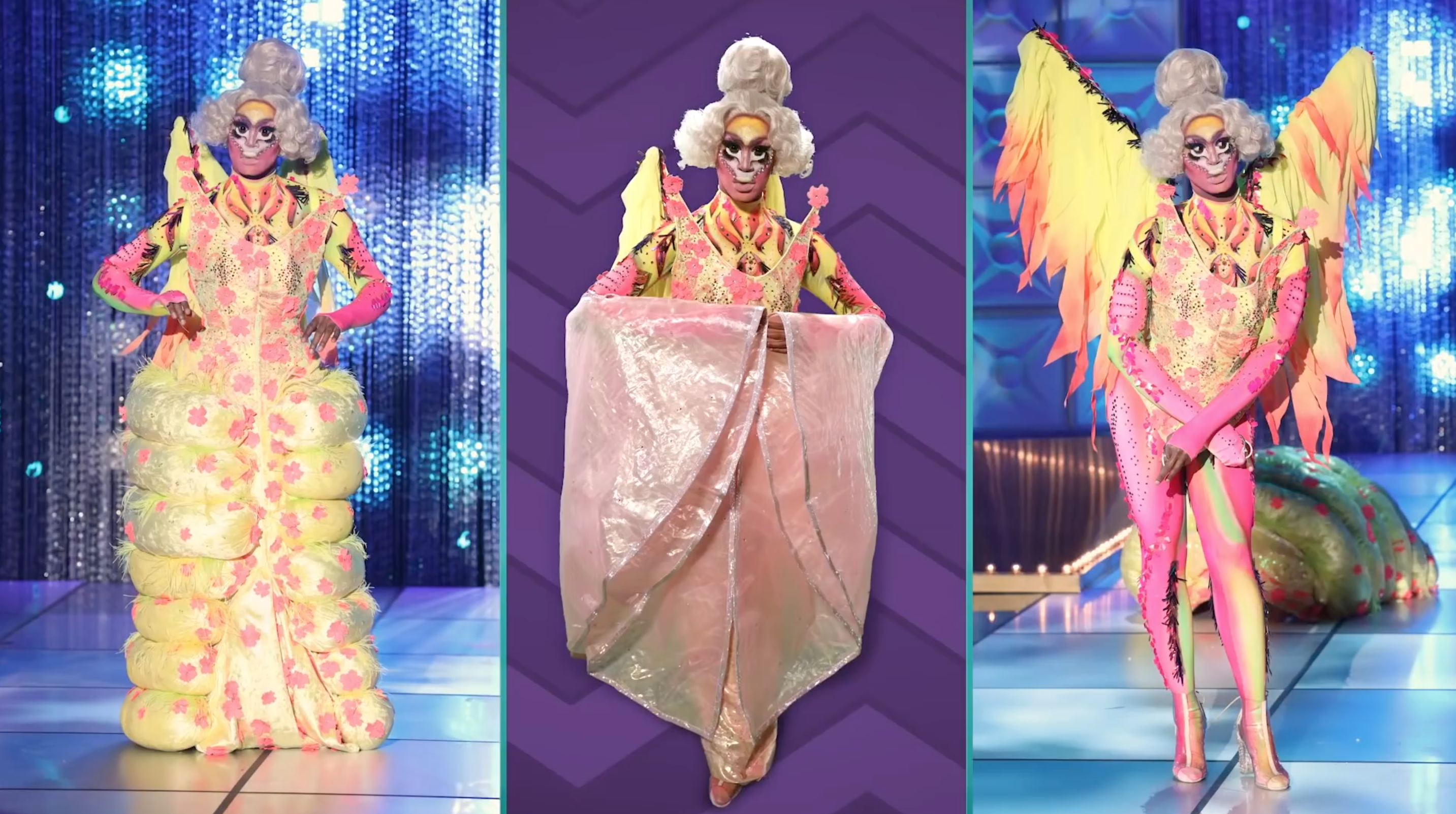 I’m torn with this look because there’s so much I love about it but it just didn’t quite land. Firstly, I hated the wig. The makeup was a cool idea but it just looked like a budget version of what the drag queen, Hungry does. The acid yellow and neon pink colours were cute so I was about that. But I hated the cocoon part of the outfit and the wings were underwhelming.

Okay now I’m writing it down I realised that I actually dislike this look more than I do like it. The idea was fun but not the best execution.

This week’s challenge winners were Blair and Mayhem. Every group in this Get A Room challenge was a bit bland compared to the All Stars 4‘s Queen of Clubs challenge but yeah they did okay I guess. I thought Mayhem personally did better than Blair so I felt she should have won. 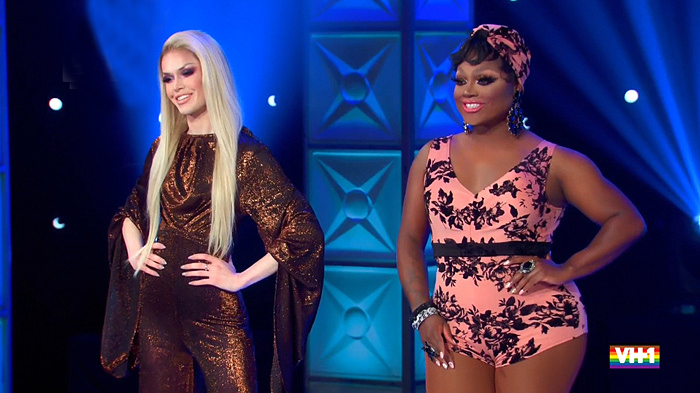 But there was a shock twist. Although these two won, it was actually Jujubee who was the victor this week for her individual performance. Seems like a weird choice but fair enough. Although I stand by that Mayhem did the best this week. I think if Blair’s performance was less-awkward she could have won.

Blair and Mayhem were the tops this week and Alexis and Cracker were safe. 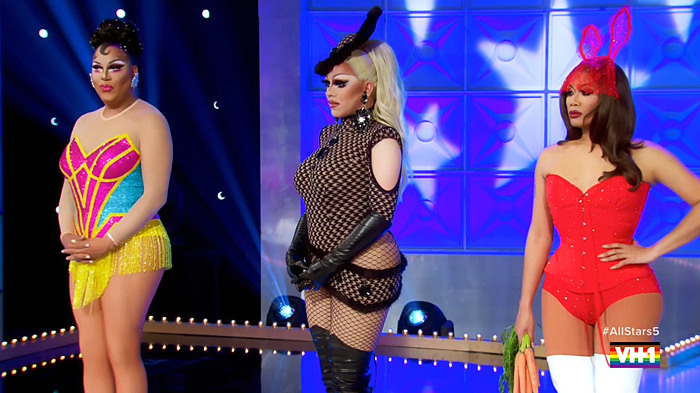 The bottom 3 this week were India Ferrah, Mariah Balenciaga, and Shea Couleé?! 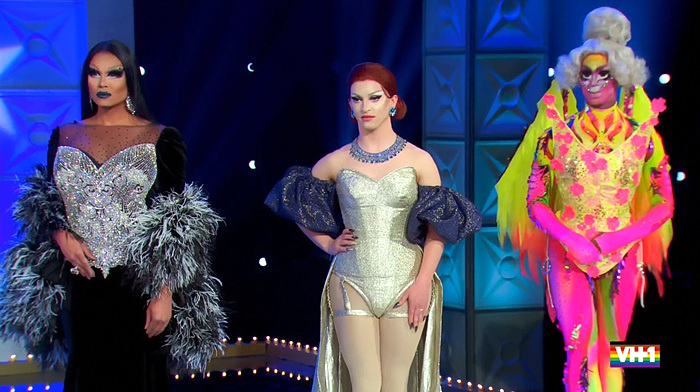 Controversial I know, but I’m kind of glad she was in the bottom, to be honest. No excuses just because you’re a fan favourite.

The Lipsync – Juice by Lizzo 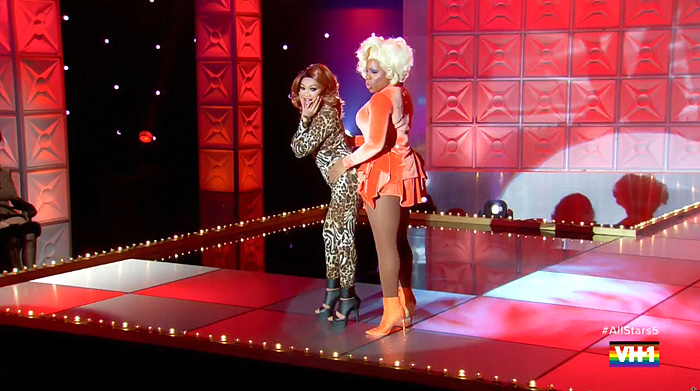 I was so excited to see Monét return. I think she gets overlooked as a ‘lipsync assassin’ and honestly, she’s great. We still think about her fake-splits moment. Juice was the perfect song for Monét to deliver some true sass – watch out Jujubee! 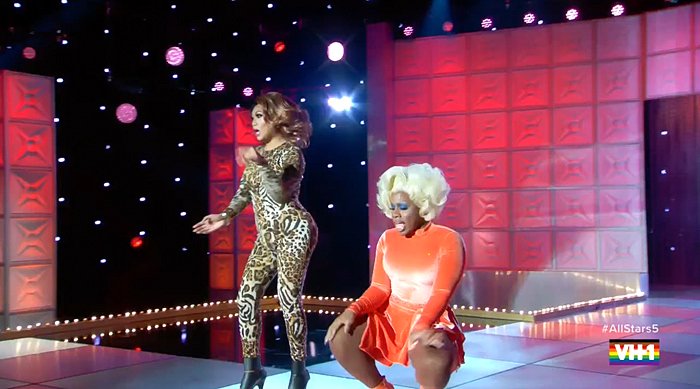 Honestly, I don’t think Jujubee served it. She looked a bit awkward and lost – and normally she slays it. But Monét was running circles around her in this lipsync.

In the end, Monét won the lipsync which I thought was completely deserved (even though I wanted Jujubee to win). That meant that it was the group’s decision and Mariah was sadly eliminated. 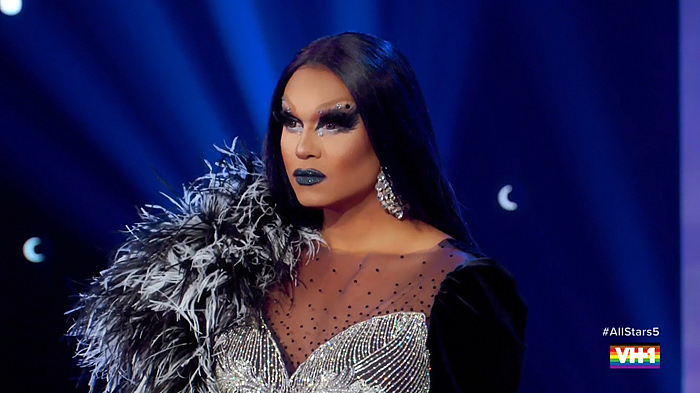 I think she’d run her course on the show but I wanted to see more of Mariah’s looks on the runway, but hey, we have Instagram for that.

I kind of wanted Shea to go home, could you imagine the gag and the backfire for the producers if they put her in the bottom for shock value and she actually went home on episode 3?! 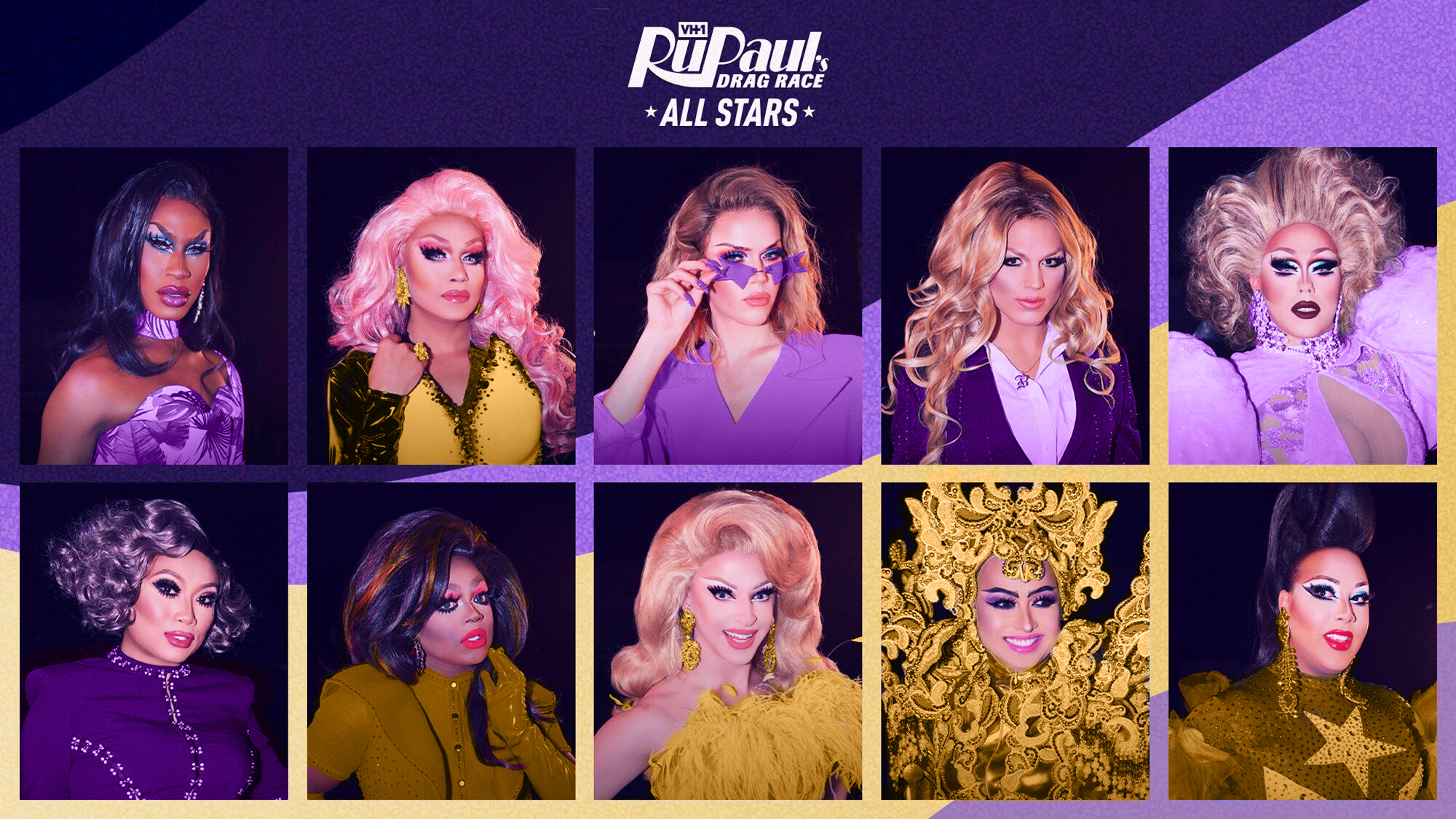 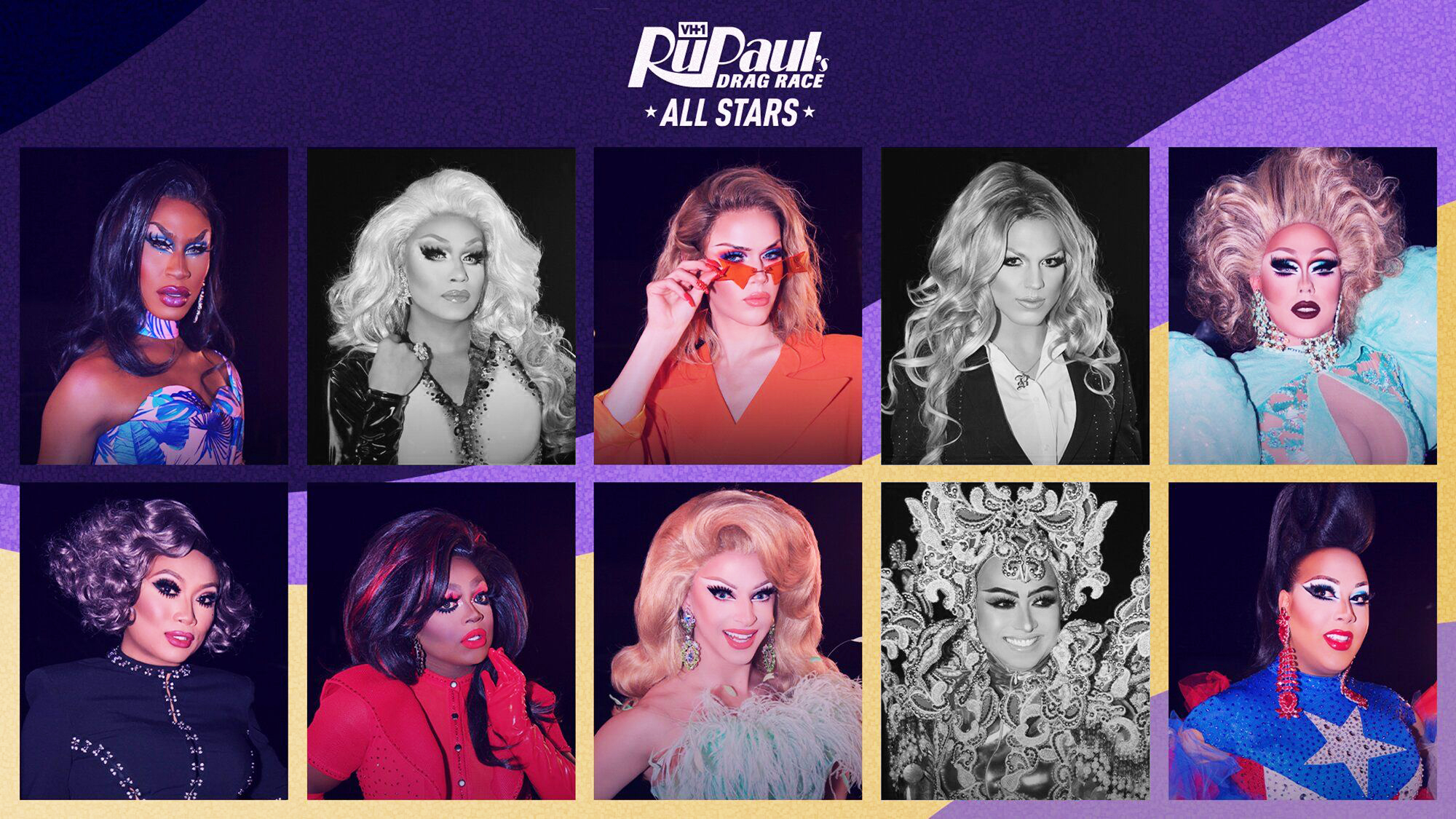 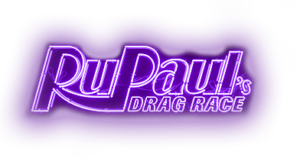