On Monday night I ventured down to Tunnel to see the RuPaul’s Drag Race season 10 winner Aquaria live in Leeds. I wasn’t working today so I thought it would be a bit of a spontaneous adventure. I quickly hopped in the shower, got dressed and headed into town just before the show started.

Now, I’m sure a lot of you are aware of the ‘dress code’ scandal that happened 2 days ago where Aquaria went off on a huge tirade about a bouncer not letting her into Heaven in Liverpool for wearing tracksuit bottoms. I understand the bouncer’s reasonings and I can see why she was annoyed. But rather than it being handled maturely, it all kicked off into a huge Twitter rant about how ‘trash’ Heaven was and that Liverpool was a joke and what not. It was kind of a bitter and childish thing to do. 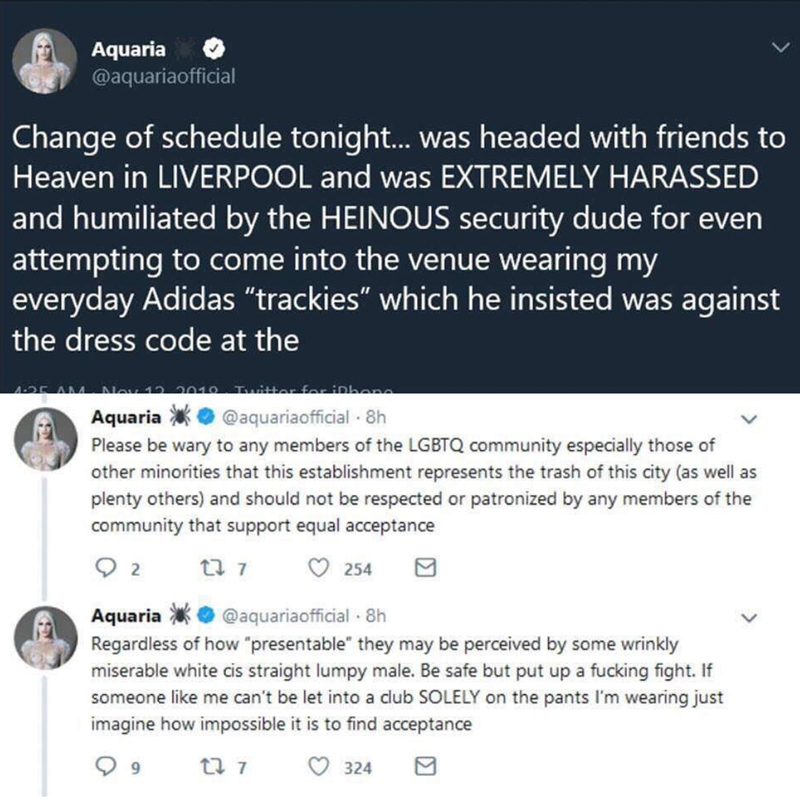 Aquaria’s “If someone like me…” part of her rant is what really got people angry online. People just saw her as an entitled, petulant child who didn’t get her own way so she tried to use her platform and large fanbase to publically trash a well-known and inclusive LGBT venue. Then she came for the queens – christ on a bike, this kid was triggered! 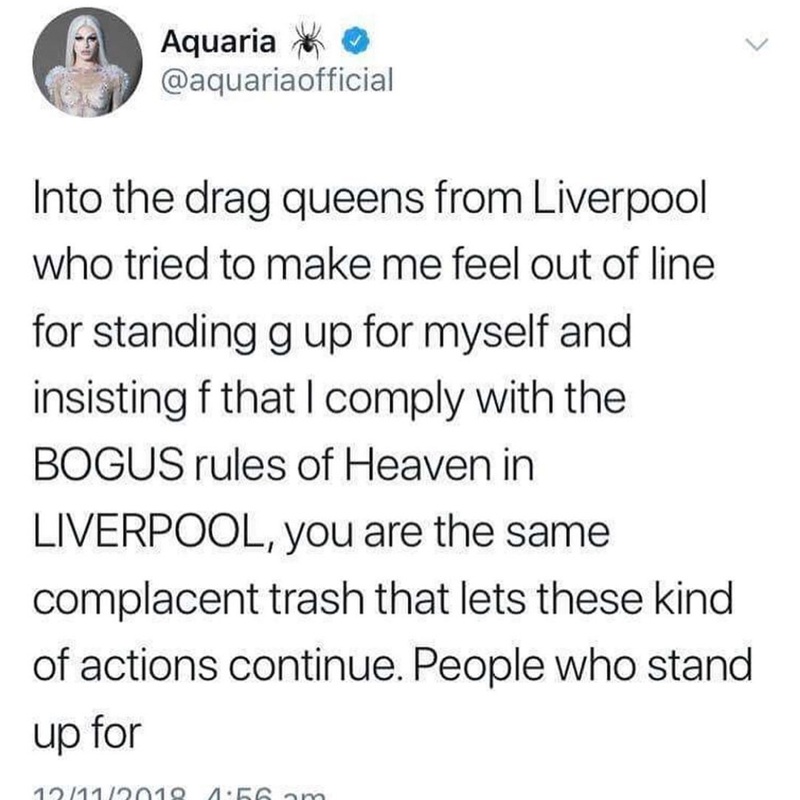 Of course, being the nosey parker that I am, this is one of the main reasons I decided to head to her show to see if any of this juicy tea would be spilt – it wasn’t. But there’s a reason why I truly do love the gay community in Leeds, they’ve got a good sense of humour. I saw so many people turn up to the gig in tracksuit bottoms and I genuinely found it hilarious. But enough about the drama, back to the show. 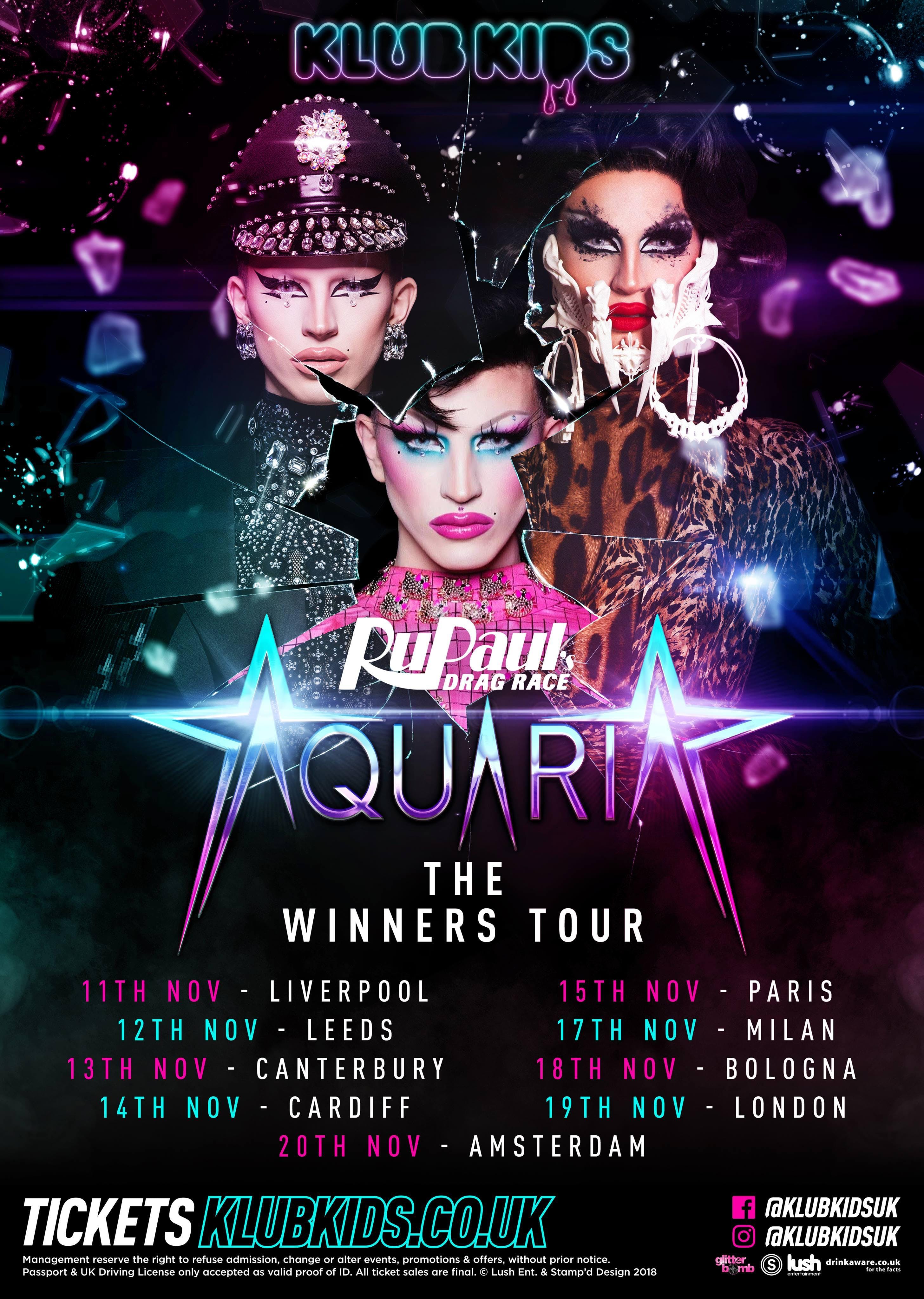 When I saw Sasha Velour (Season 9 winner) play in Tunnel, they extended it to the main room of Mission because of popular demand and it was sold out. I’ve never been to a drag show in Leeds as busy as Sasha’s show. Aquaria still pulled in a big crowd but it didn’t feel anywhere near as full. Put it this way, I never had to wait more than 5 minutes in the bar queue.

To kick off the show was Silly Gal and honestly, she was excellent. She had the tough job of being the warmup and getting the crowd going and boy did she. Silly Gal performed a brilliant medley of whorish hooker songs and it was everything. Especially when she cut to audio clips of Kat Slater saying “I became a total slag!” I was very impressed and she got a huge round of applause – this was a truly great way to start a show.

Following Silly Gal was another great performer, Cheryl Hole from Essex. I’ve never seen Cheryl perform before but I’m glad I have now. She had great stage presence and energy and she looked as femme as femme could be. She performed a song that I honestly loathe but she did it with such sass that I honestly got into it. Cheryl Hole performed ‘Work Bitch‘ by Britney Spears. God, I dislike this song, but she put on a show, that much I know – if only Britney had this much stage presence and movement. Bravo Cheryl Hole, you’ve earned a new fan in moi. Silly Gal and Cheryl Hole both did their jobs phenomenally. They really did get the crowd going. So much so that the venue felt twice as busy when they began performing.

Now we come to the main lady herself, Aquaria

As the 22-year-old Drag Race winner took to the stage, the crowd started cheering (obviously) and she got straight into her first number. Wearing a replica of the iconic Moschino bouquet of flowers dress.

Started off cute, nice outfit, fun look, she entered singing something (I think) and then she spoke with the audience for a while. There wasn’t much substance to her conversation, it was mainly about her winning Season 10 and that most of her looks for the night were from the H&Moschino collection which she was one of the lookbook models for. The night carried on, she had another couple of costume changes, did a few dances, lip synced a few songs, some were pop songs, others were once I can only assume she wrote. It was hard to tell, you could hear the naivety and youth in her as she kind of babbled on. Then she mentioned winning Season 10 some more. Maybe I’m being critical, but at £15 for a standard ticket, that’s a lot more than I’ve paid for other shows. Now, I have to admit, I think Sasha Velour’s was more expensive – £20 for a standard ticket I think but I felt we got a lot more from her. It was a show of similar length but it felt like there was more presence, more actual fan interaction. More talking about what she’d like to do in life now with the gravitas of her Season 9 win rather than just talking about winning. I don’t know, I just felt that it wasn’t worth it as much as other drag shows in Leeds that I’ve seen. Even some of the cheap ‘quick’ drag shows from people like Latrice, Willam and Detox got me (and the crowd) going a bit more. Either way, it was a Monday night out and I had a lot of fun after the show. But my god am I craving a proper comedy queen to return. I miss hearing some jokes! Or even a performance like nothing I’ve ever seen before. I think my standards have recently been set quite high after seeing Jinkx Monsoon last month.

I’ve seen 4 RuPaul’s Drag Race winners perform so far – sadly, Aquaria didn’t make top 3. But while I was having all these thoughts – Aquaria told the crowd that she won Season 10 again.