I, like most of you reading this are still saddened by the outright criminal activity that was Scarlet being robbed last week. I mean, what the hell was RuPaul thinking?! She was definitely on some sort of trip – either that or Ra’Jah is her illegitimate son.

The episode started with tensions as high the decibels in Vanjie’s ‘indoor voice’. Straight away, Ra’Jah was saying how she didn’t want to read Scarlet’s message and she just wanted to scrub it out and not give her the time of day. Firstly, that’s rude as hell – it’s the queens parting message to the other contestants, don’t be nasty.

Ra’Jah was so damn bitter that Scarlet ‘threw her under the bus’ despite the whole team saying Scarlet should be sent home. The struggle is real. But when she referred to herself as the Lip Sync Assassin – please… You’re no Coco Montrese.

This week, like most mini-challenges this season, was another strange one. The queens had to pop on some rubber tits and bounce their way to victory in a slow-motion sack race. Yes… it is as weird as it sounds but who doesn’t love a jiggly pair of tits in motion?! Speaking of Jiggly, that’s who Silky reminded me of in this mini challenge!

Nina West and Shuga Cain both won which seemed fair enough but it also seemed like it was because they were the only two queens that you could make boob puns out of their names. But the mini challenge didn’t really benefit anybody because this week was a design challenge.

The Maxi Challenge – Farm to Runway

This week the queens will be working on another design challenge using unconventional materials. This challenge involves the queens using organic produce to make a couture outfit ready for the runway. Ru decided to have a gossip with Plastique about her family and Plastique broke down in tears. Now, we don’t often see Ru interacting with queens (unless the cameras are rolling) but seeing as they were on, Ru went in and gave her a hug.

Ru wandered around the werkroom to ask the queens who they think should leave the competition. Silky, with no hesitation, said Yvie because she’s “injured” but boy did Yvie prove her wrong in Alyssa’s project. Naturally, Yvie said Silky should go home because she’s annoying and can’t rise to a challenge.

But before they headed to the main stage, the queens would be meeting a special guest to help get them runway ready. The one and only Alyssa Edwards will be helping the queens perfecting their runway walk with some mentorship.

The queens had to work their stuff for Alyssa to show the other queens why they deserve to be in the competition. Overall, it was a pretty simple task and, of course, some queens did better than others. But it was nice to see Alyssa talk to her drag daughter (Plastique). But the bit that had me howling was when Plastique mimicked Alyssa’s iconic romp on the side of the stage.

Before the runway, the queens had to do a little line dancing hoe-down to get into the spirit of the theme. Yvie didn’t dance because of her injury which seemed a little odd because she said she wouldn’t sit out or miss an opportunity because she hates queens who make excuses… 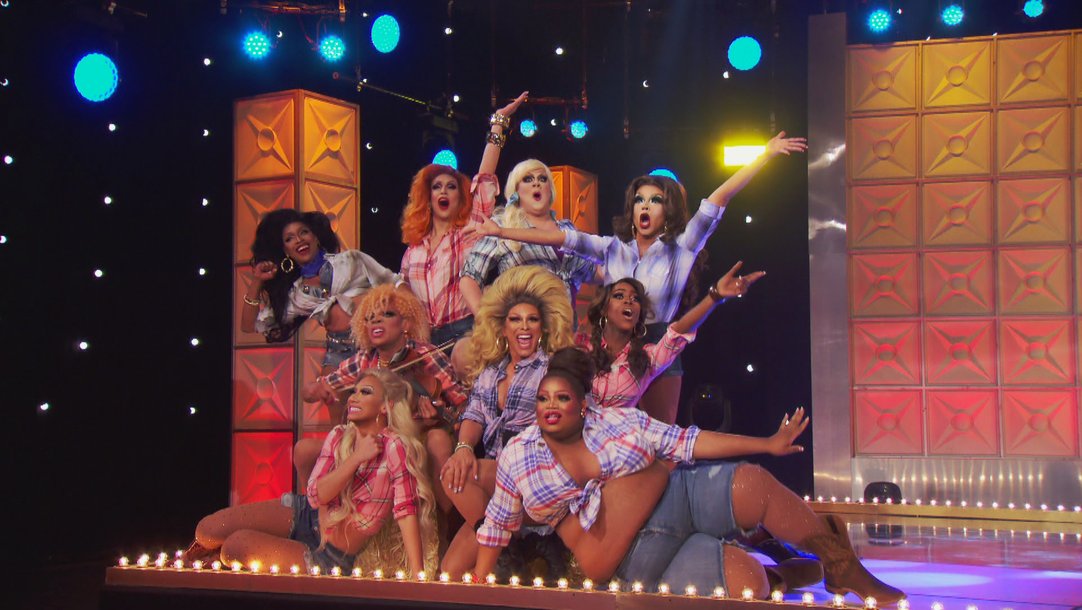 Category is: Vine to Runway – Toot or Boot

After the random line dance, it was time for the queens to RuVeal their attire for this week’s maxi-challenge.

She doesn’t look bad, but she basically recreated the exact same look as when she had Peppermint’s trunk in the first episode but this time she did it with different materials. For that, I give her a boot and I feel no guilt. 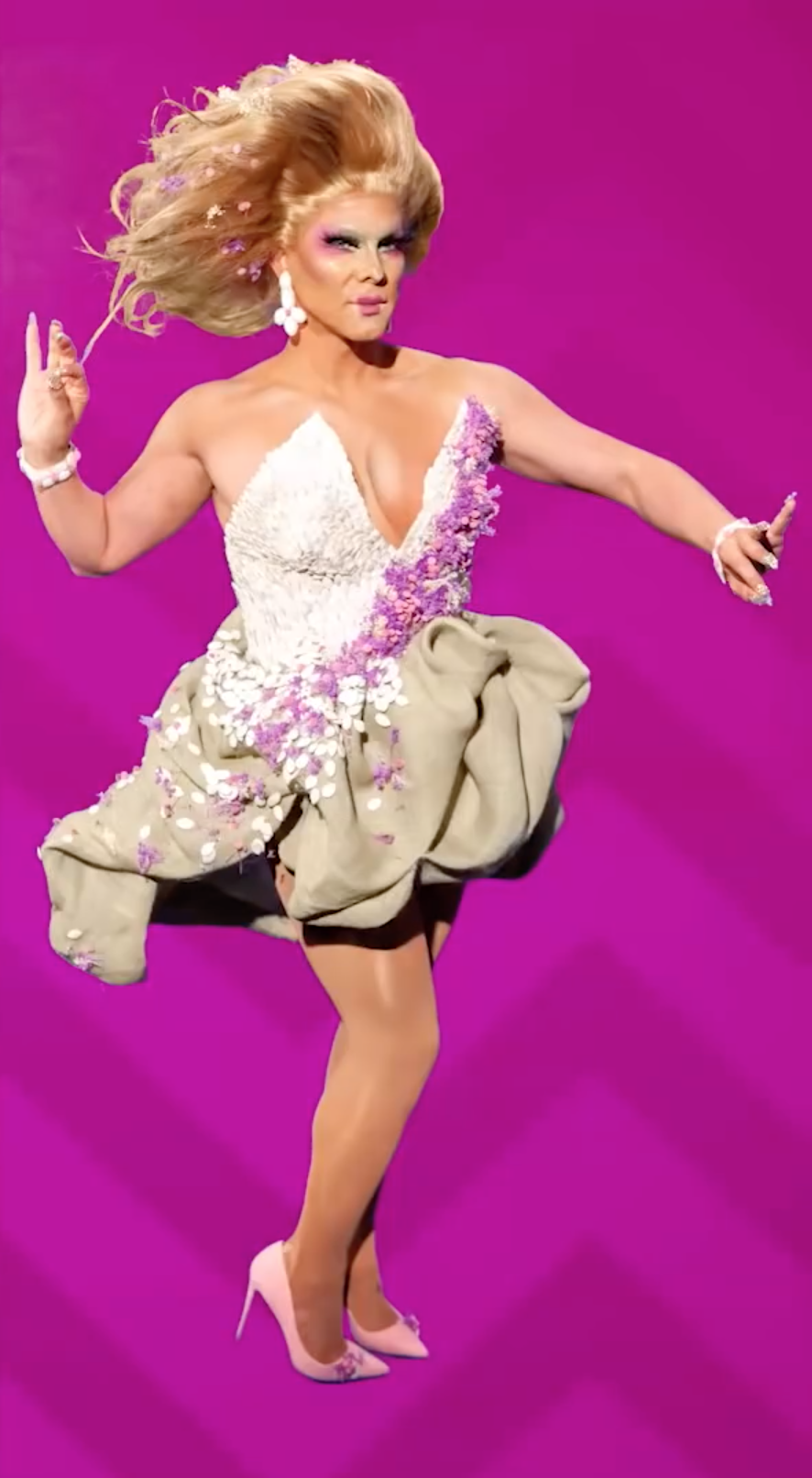 This look was gorgeous. Shuga looks editorial, high fashion and fun. She’s successfully changed up her look each and every week and this one was a huge hit for me. Personally, she should have been in the top 3 this week.

I like this, Yvie brought us a bit of glamour to prove she’s not just spooky. The colours went well together, the dress, although simple, did look nice so yeah, well done Yvie. 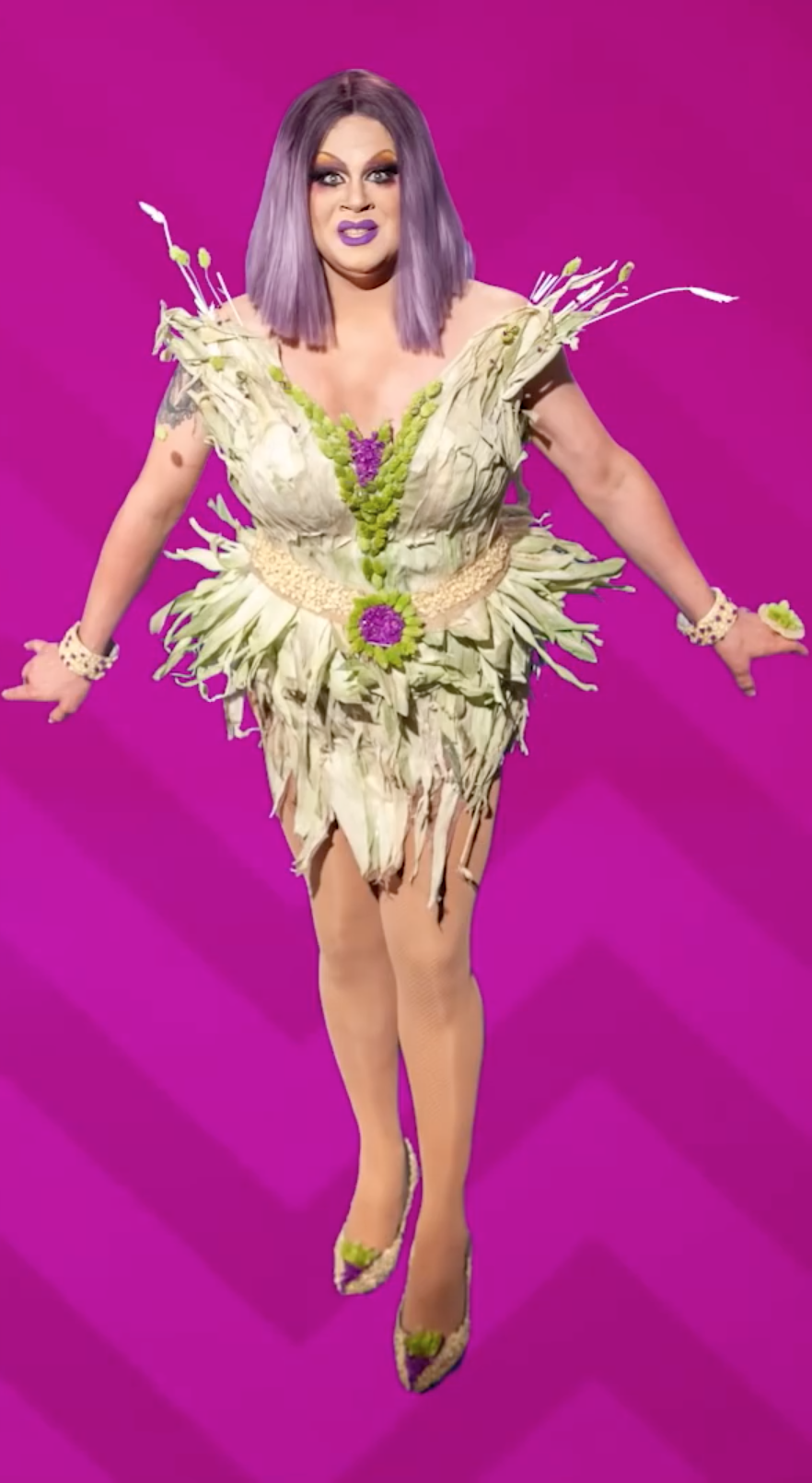 This was not worthy of being in the bottom 3. Personally, Silky should have been there for her repeat outfit. I think Nina’s wig and makeup look modern and great, the dress was fun, it looked unique and it suited her beautifully.

I love this. The dress looked expensive, the pop of orange looks nice but in my eyes, this dress is more fabric than organic produce and that was a bit of a miss for me. The butt reveal was a very Detox move – not that Detox owns getting her arse out but overall I think she looks great.

The shoulder pads were a bit intense in this outfit and, like Brooke, it wasn’t much other than fabric with a couple of embellishments. But the wig was the miss for me, if she wore a big executive beehive, the outfit may have been forgiven.

I mean… it’s better than what’s she’s brought to the show so far but a bit of rope don’t impress me much.

I mean. I commend her for making trousers which is a tough challenge but this outfit was a mess. The bit that offended me the most was the weird headpiece thing. I liked the green plait but the front took away from that. 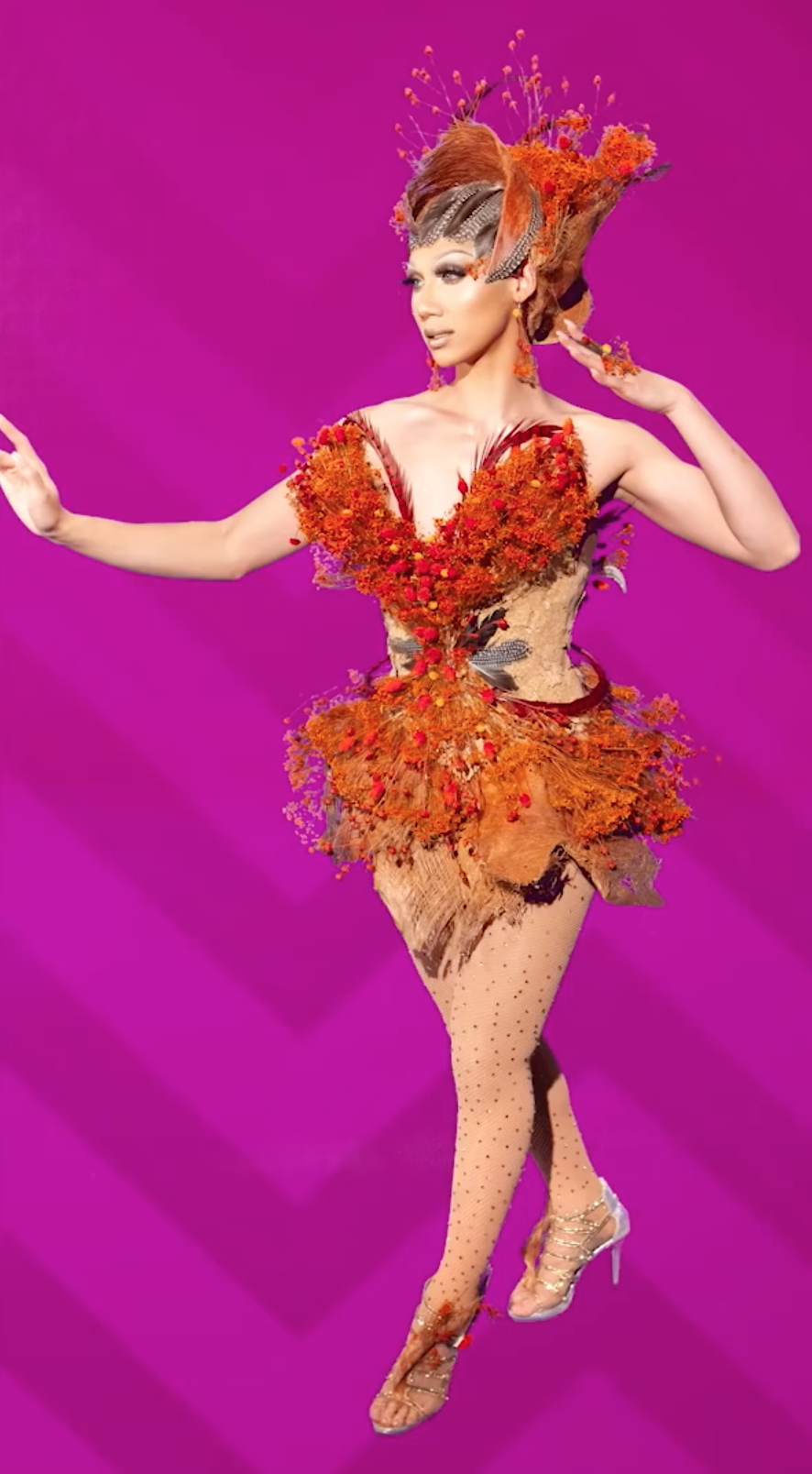 This is very nice, it looks like an expensive costume from an opera or ballet but it does feel quite similar to her other things (a corset) but I can’t say it was bad because she looks great.

This week Ra’Jah and A’Keria battled it out for survival and A’Keria ended up victorious. The negative reign of Ra’Jah has finally gone! But there was so much more this week that I want to address:

Yvie called out the bullshittery of Vanjie and Silky telling Ru that Yvie should go home because Yvie knows she’s a strong competitor and their reasons were weak.

Because of this throwdown, we got to see one of the most Canadian reactions to an episode ever – Brooke backing away from the drama quietly.

Honestly, watching Brooke’s reactions and fourth-wall breaks were by far the funniest moments of the entire season so far because I found myself nodding back at the TV in agreement with her. 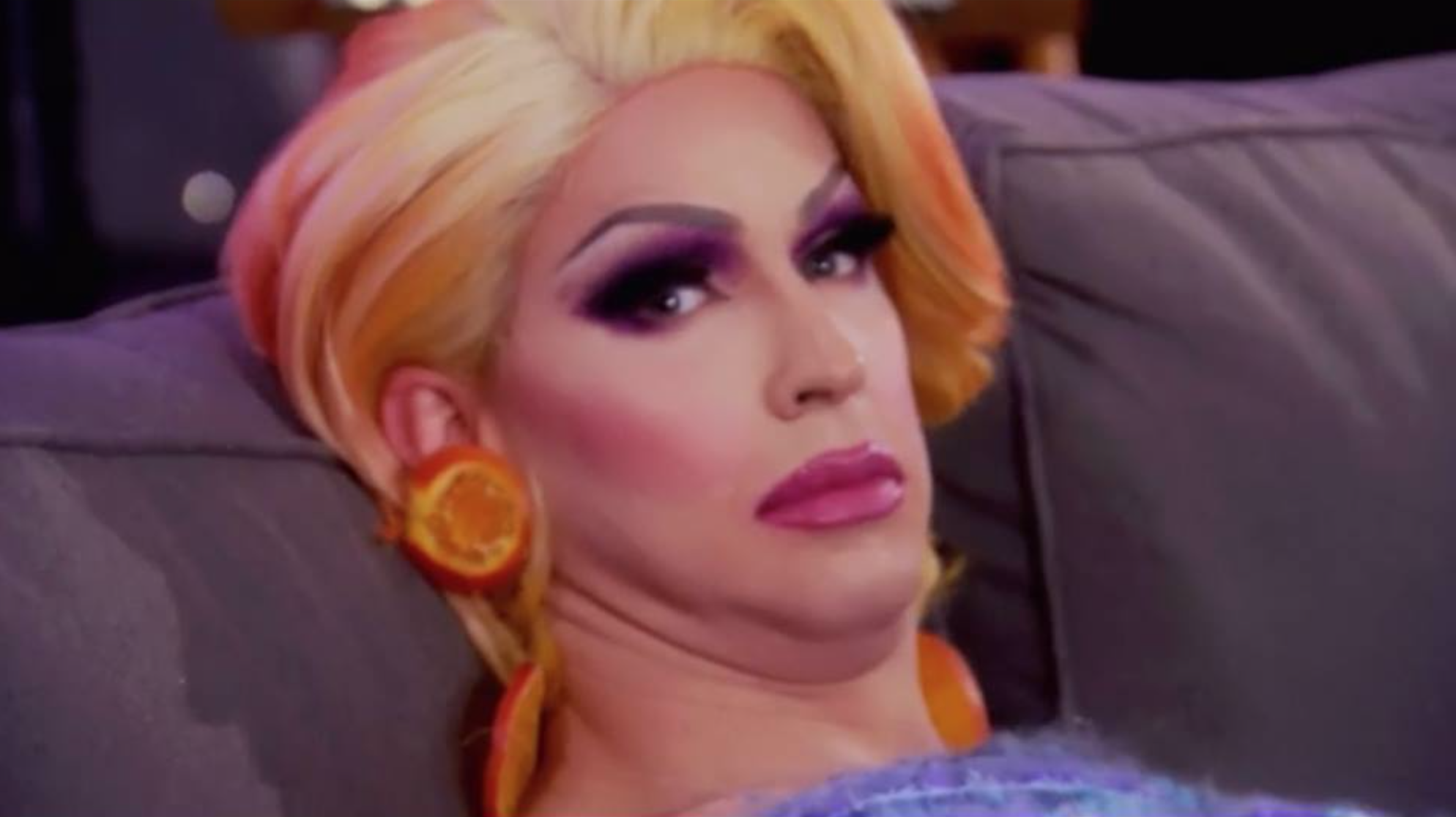 But that wasn’t all. Knowing her hate-train had nearly reached its final destination, Ra’Jah decided to kick one more queen down in their hour of need. This time her victim was the innocent young Plastique Tiara. 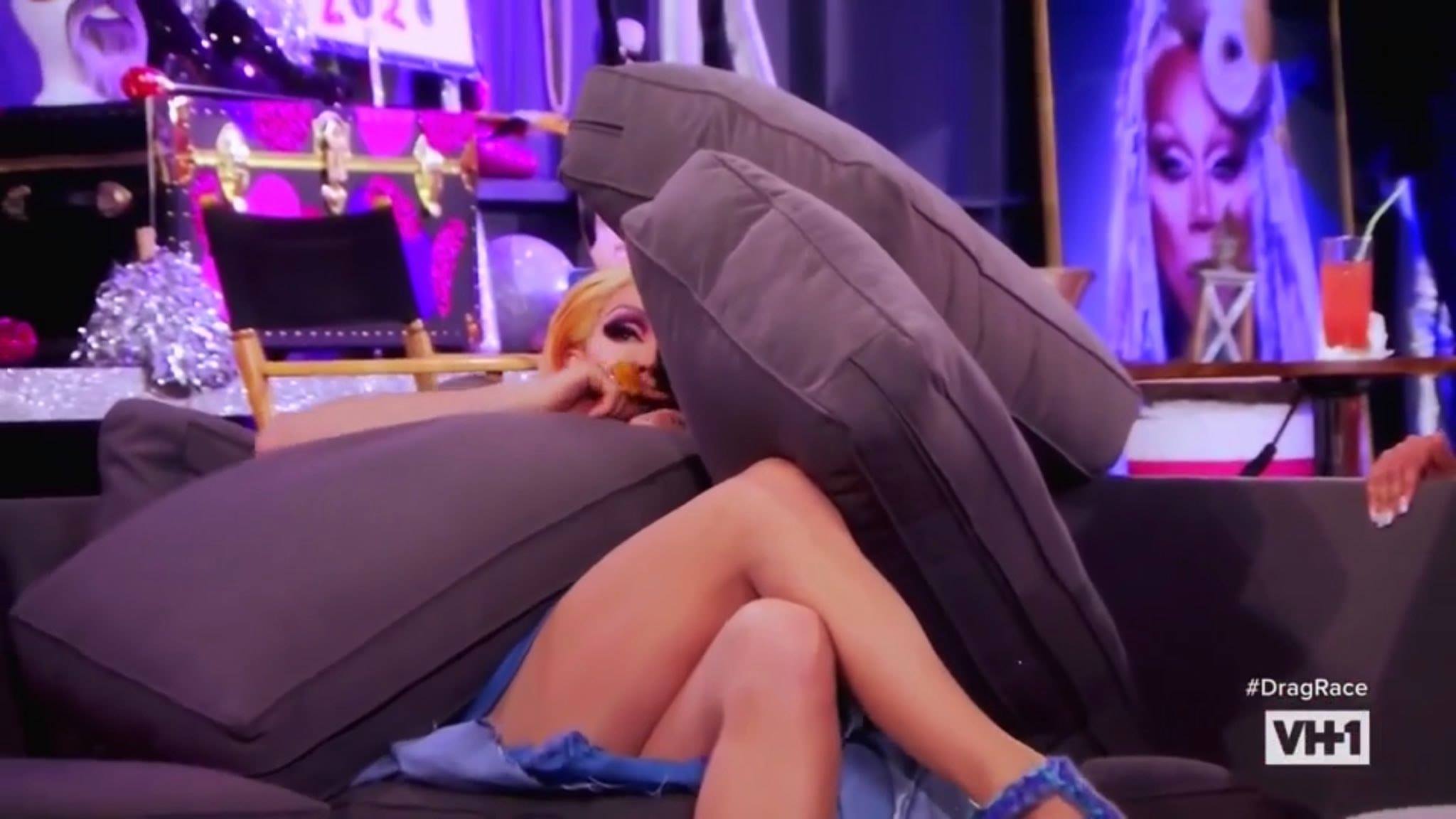 Ra’Jah called out that her video message where her Plastique’s boyfriend said her mom and grandma are loving her didn’t match up with the story of isolation that Plastique told Ru about when she cried. I guess we’ll never know but my word, you don’t half pick your moments do you Ra’Jah?! 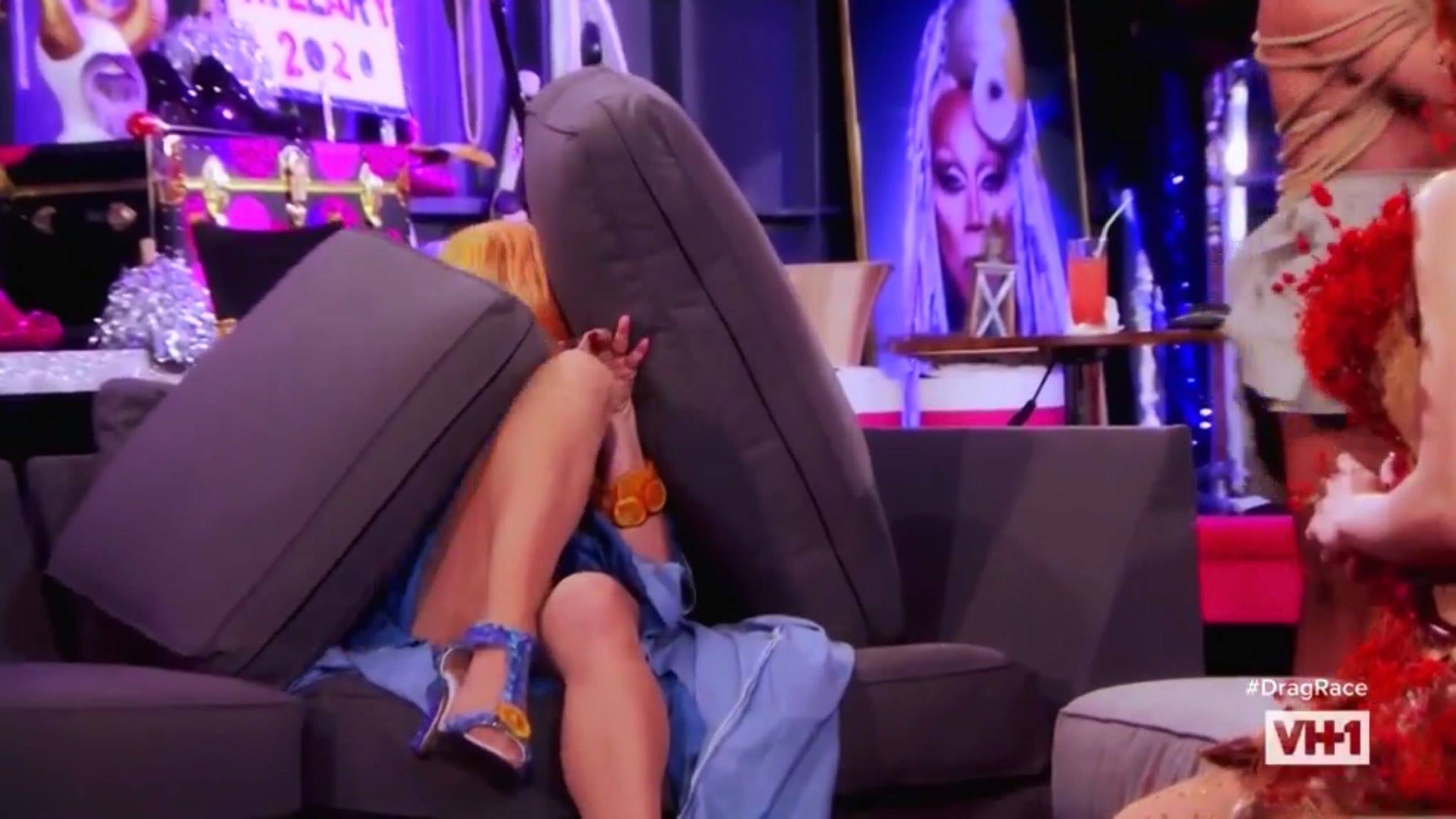 But the funniest and most delusional part had to be when Ra’Jah called out Plastique for ‘under performing’ in the competition. Have you checked the scores Ra’Jah?!

Either way, it was a juicy one and I’m living for the drama! I just don’t want all the screaming in my face, am I right Brooke? 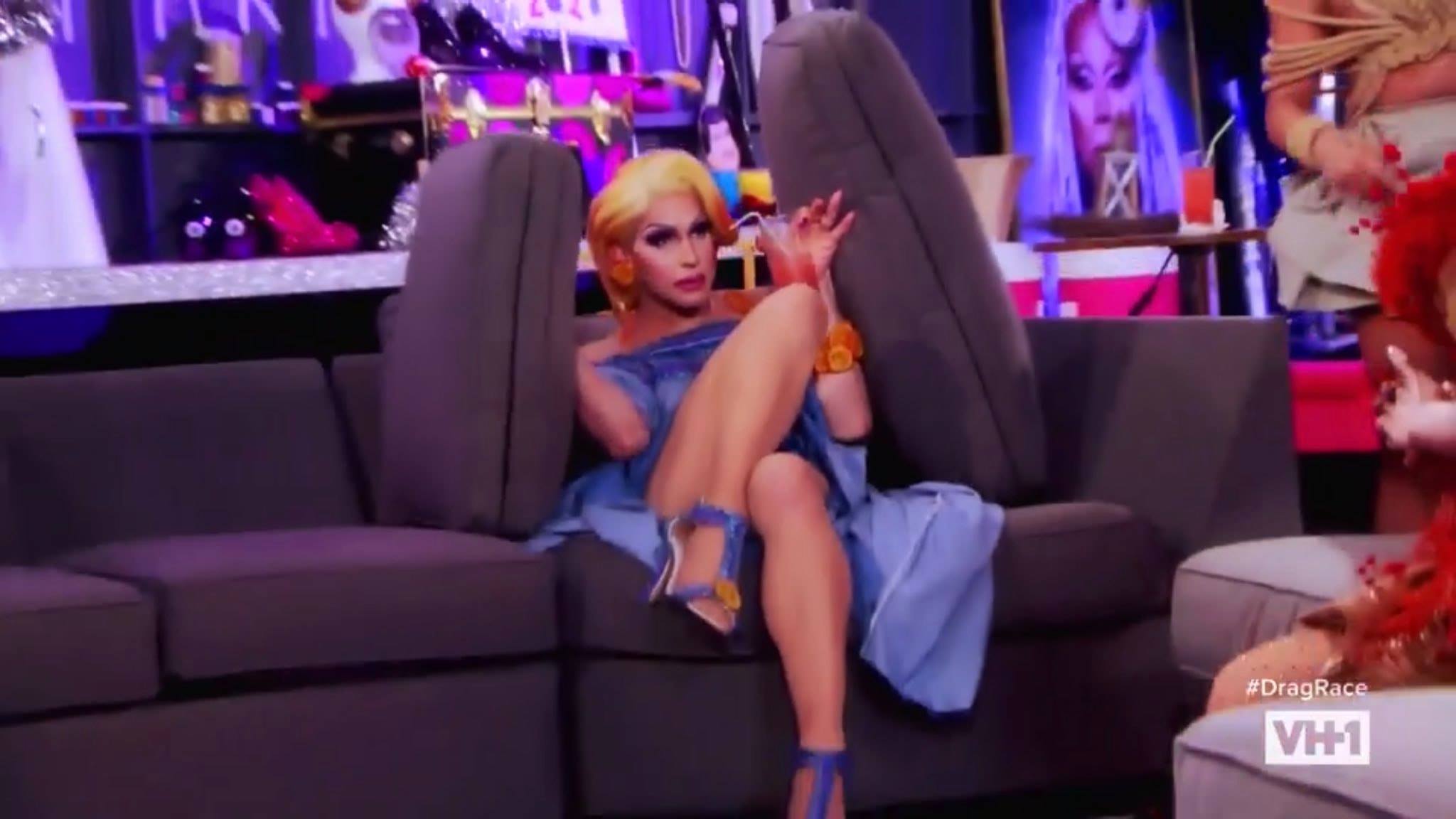 This week, I gained 7 points which took my total to 51 points and Tom got 2 points which brings him to 36 points. Vanjie is now on 9 points. 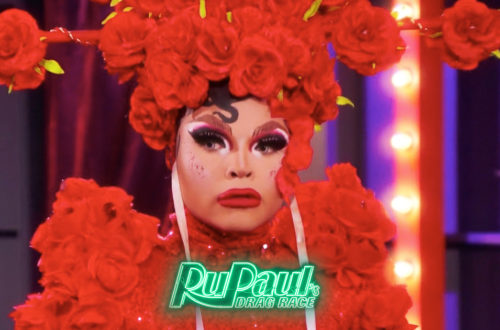