Escandalo! It would appear that this week has given the Drag Race community it’s first big scandal of the season. No, I’m not counting Silky’s sexual assault claims, that was pre-show. I’m talking about what’s happening right here on television. The scandal, of course, is the tragic and heartbreaking elimination of Scarlet Envy – or Tammie Brown 2.0 as I like to call her.

Yes, I was pretty gutted about this week’s results, but I’ll get on to that later. On with the episode! It started with Vanjie moaning about being called out by the judges for serving the same look – something that she has absolutely been doing this competition. However, there’s a little devil upon the shoulder of whoever has a problem and that person is Yvie.

It would seem that almost every episode now starts with Yvie starting some sort of beef or calling out queens for their actions. She’s called out Ra’Jah for saying that she’d lipsync her way to the top if she had to (and I agreed with Yvie saying that it is a shit excuse that won’t make a champion). In this episode alone she called out Vanjie for her limited attire (which I agree with) and she called out Silky for serving glamour instead of serving spooky drag for the Halloween episode (which I agreed with). 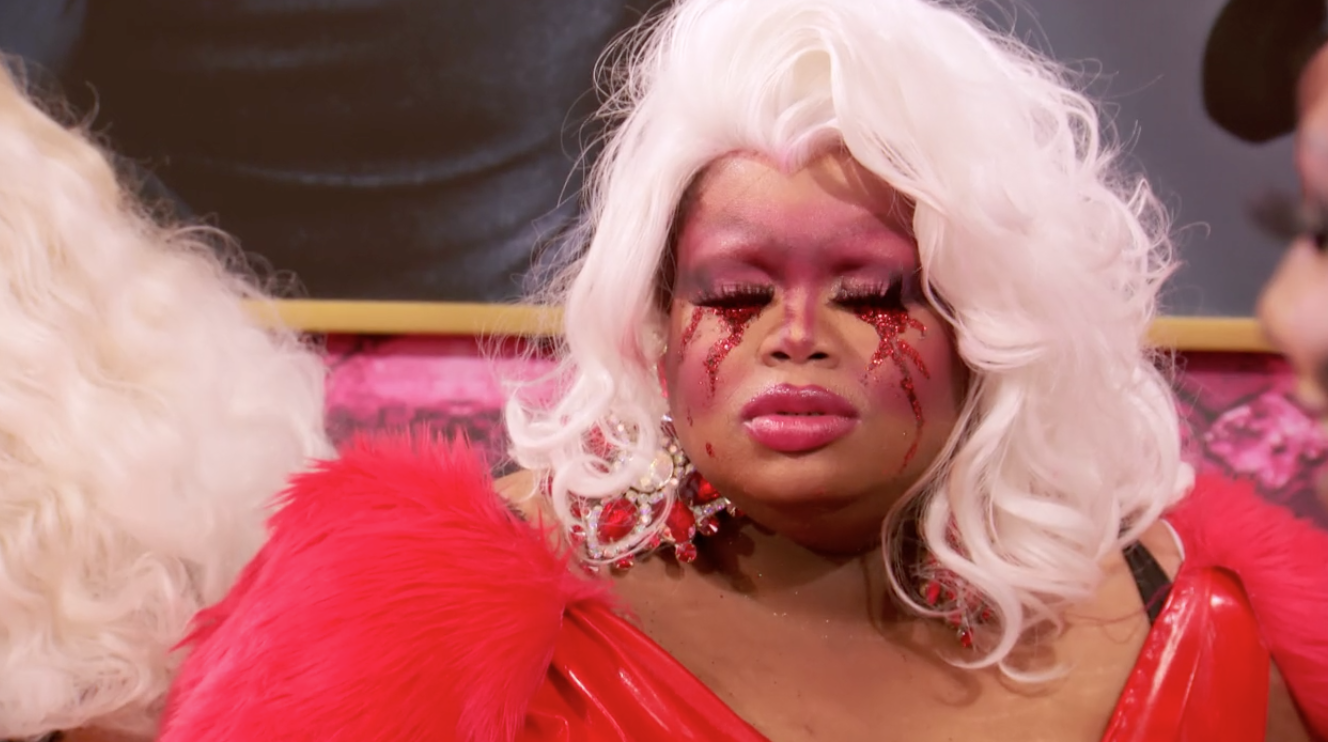 However, though I do agree with Yvie, I think she’s coming across as really confrontational at the start of every episode but then she denies coming for the other queens. 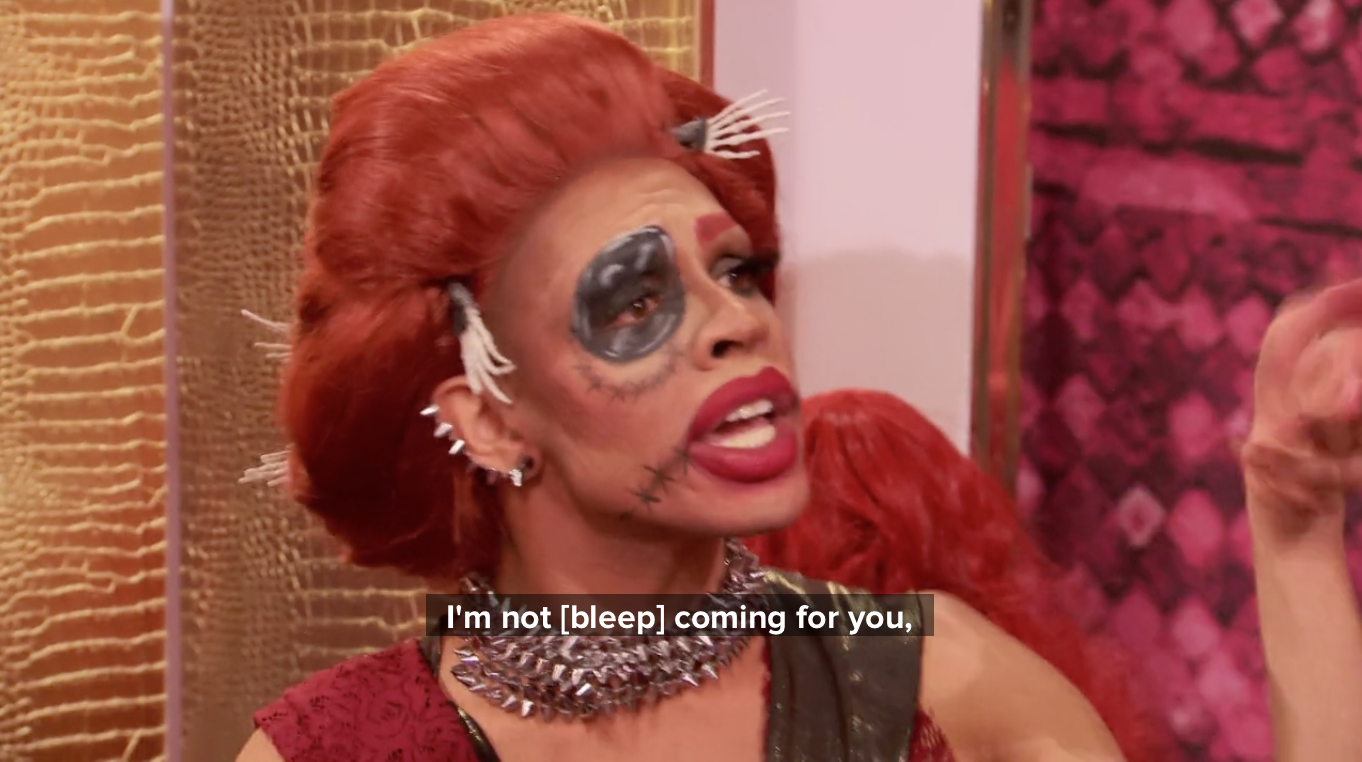 But she was… She was. It’s a shame really because I think Yvie is talented and she brings something different to the show(ish) but I think the way she runs her mouth is turning people off her and it could stop her from winning the competition overall if she’s not careful.

This one was a real treat for me because this week, the queens got the pleasure and privilege to hang out with the one and only, Love Connie! She’s a comedy queen, a living legend and an all-around hoot. 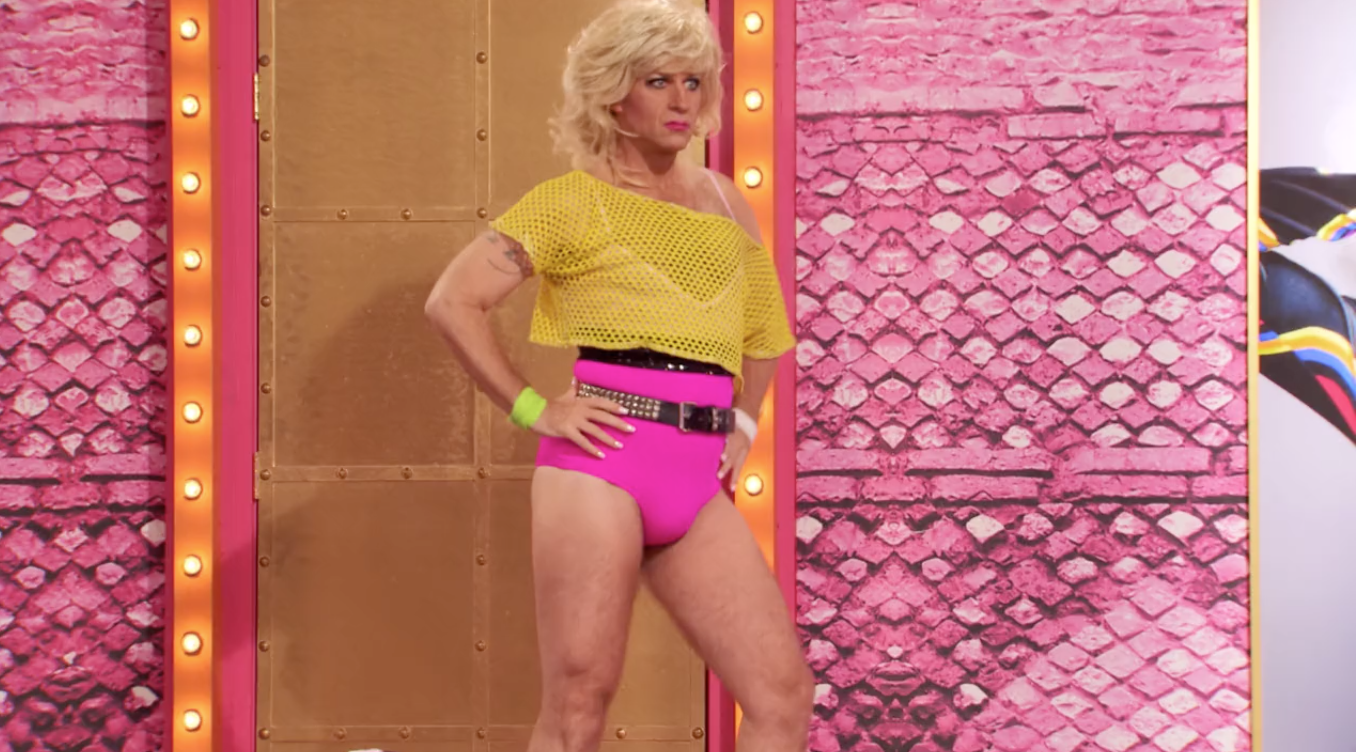 Remember her bend and snap scene in Legally Blonde? That’s right, she was the gay hairdresser! Anyway, Love Connie is known for her 80’s style aerobics trash drag and she came to give the queens a workout!

Each queen had to do a little performance while Love Connie served sass and shade. It was a relatively pointless mini-challenge but who cares, Love Connie was in the house! In the end, Plastique and A’Keria won the mini-challenge and became the team captains for this week’s maxi challenge. 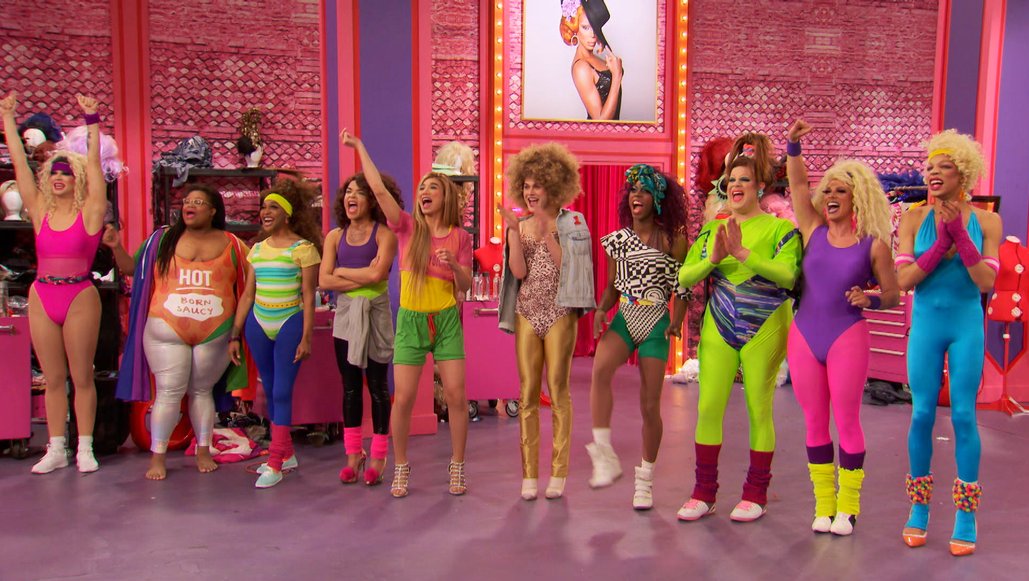 This week, the queens would be competing in teams to deliver a gold-medal worthy performance with a floor show gymnastic and dance performance. It’s The 69th International Draglympics… except it’s the first time it has ever happened… and it’s completely fictional – but let’s not kill the fun. 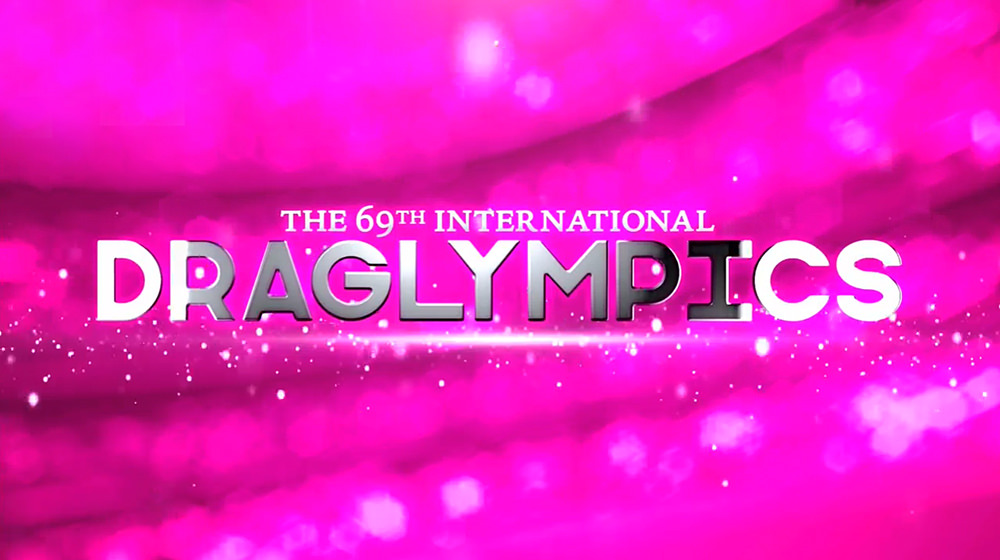 The queens had to bust a move, work some ‘fanography’ and follow a complex routine that is worthy(ish) of the Olympics. During the pickings, Scarlet (as we’ve seen numerous times) was picked last because of her inability to dance. Poor Scarlet, always the bridesmaid… 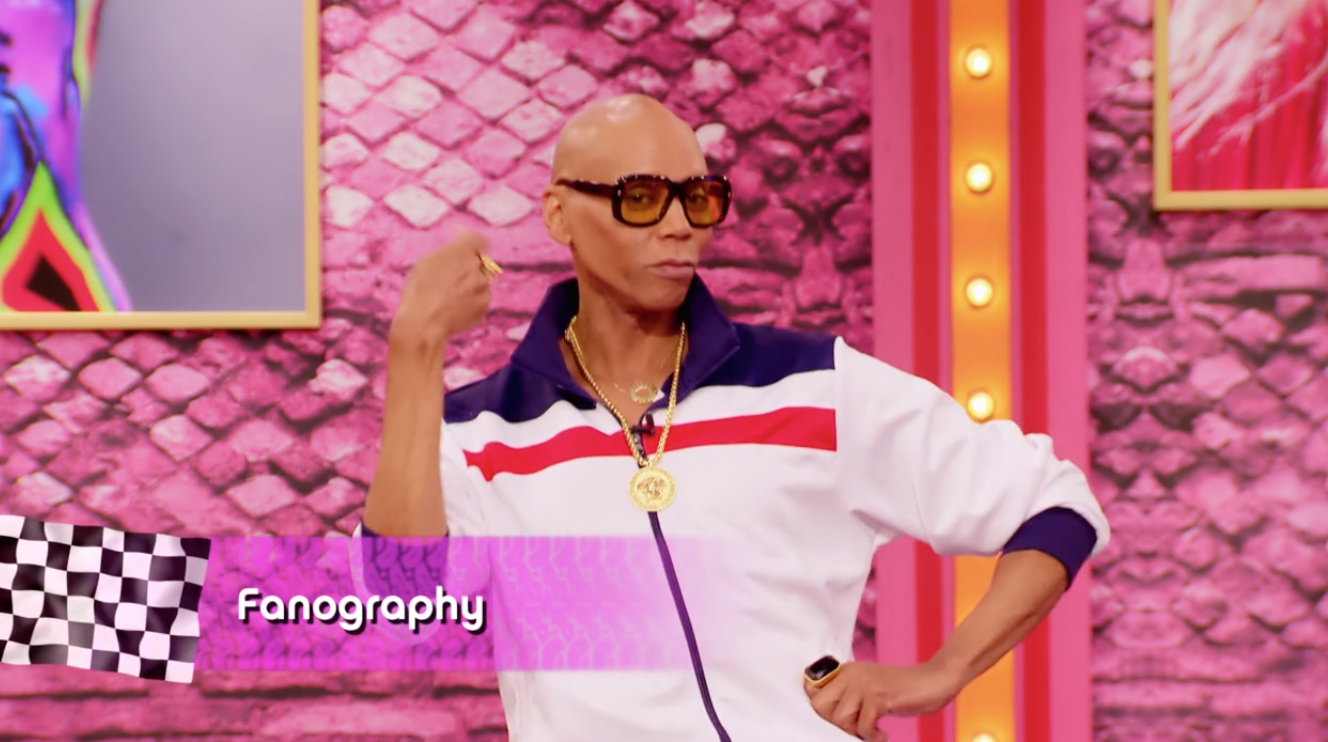 The teams would have their routines choreographed by Travis Wall with help from Olympic figure skater Adam Rippon. 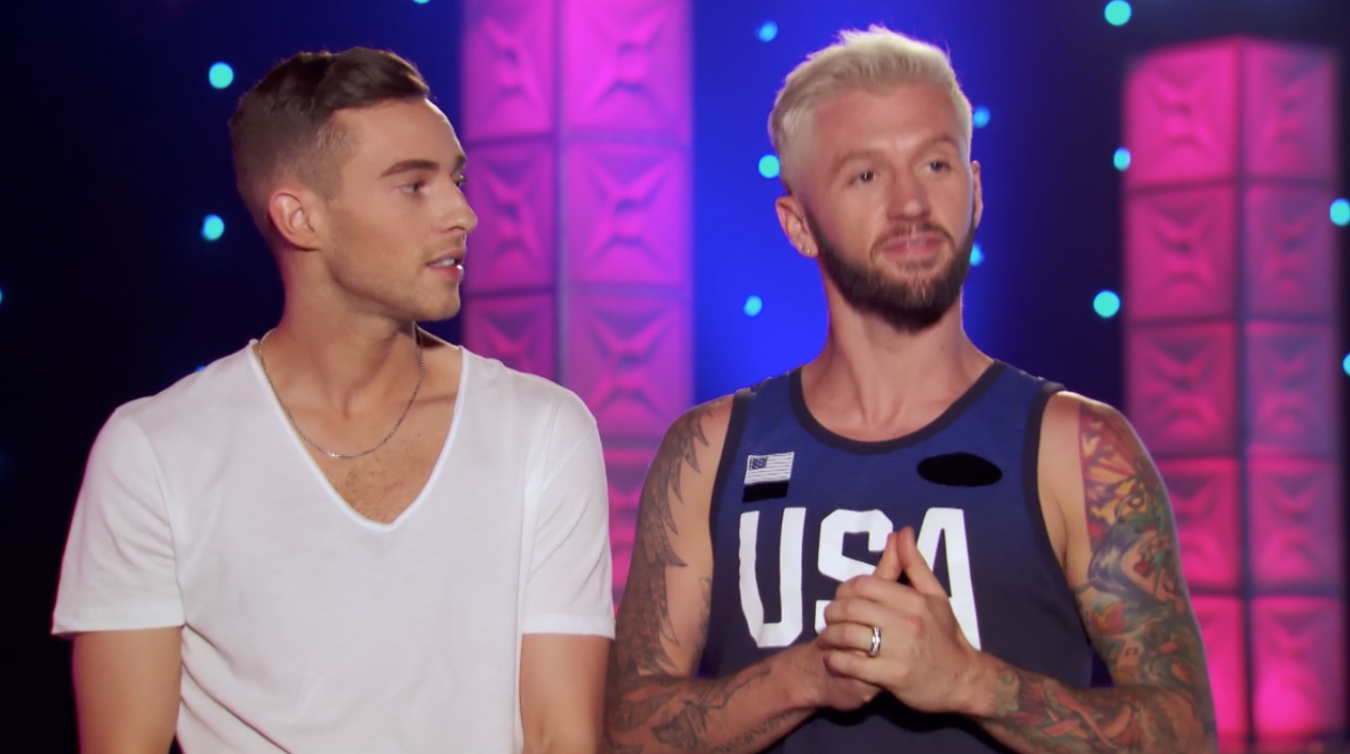 This team was made up of Silky, Yvie, Shuga, Brooke and captained by A’Keria – not too shabby a team if you ask me. A few queens struggled but overall I’d say they picked the routine up fairly well. 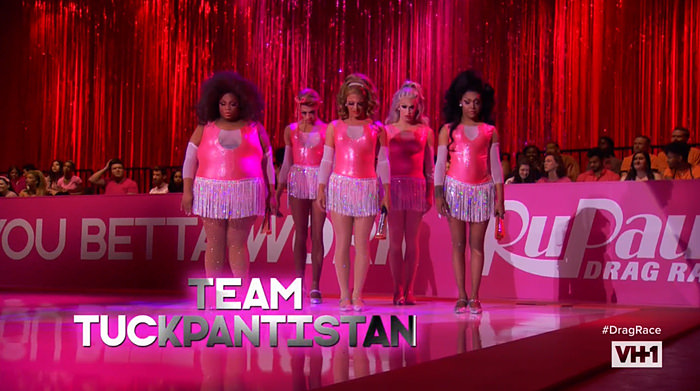 This team was Nina, Scarlet, Ra’Jah, Vanjie and captained by Plastique. Ra’Jah was semi-competent in rehearsals and Vanjie seemed to do pretty darn good but Scarlet really appeared to struggle with the choreography. 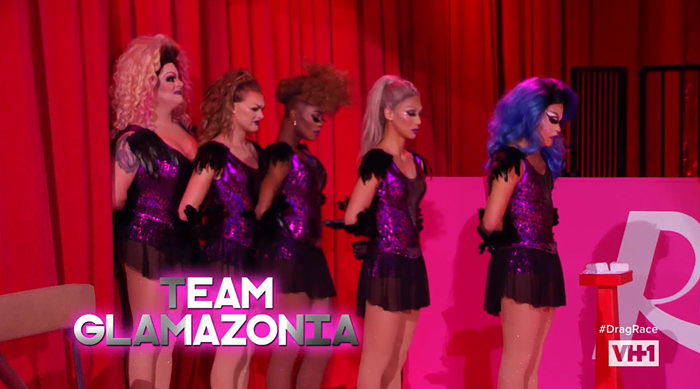 Overall, it was a bit of a ‘meh’ challenge. It was choreography and some random gymnastic moves set to a remix with drag race memes and quotes that actually were quite funny but it didn’t necessarily ‘wow’ me. 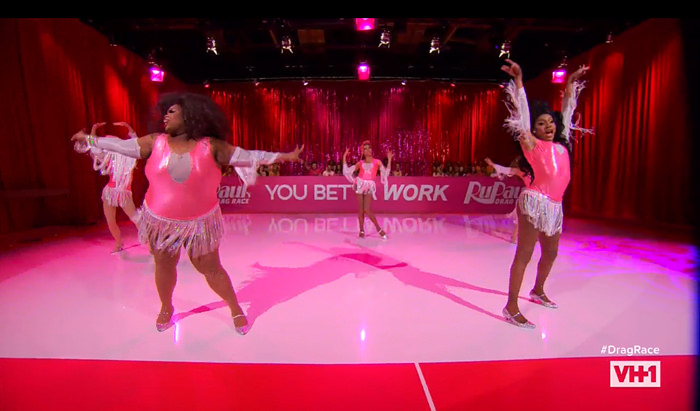 You could tell quite clearly that Team Tuckpantistan were going to win the challenge. Team Glamazonia just didn’t quite have the same level of dance capability or impressive moves. But I suppose you either have it or you don’t and that’s life I guess. 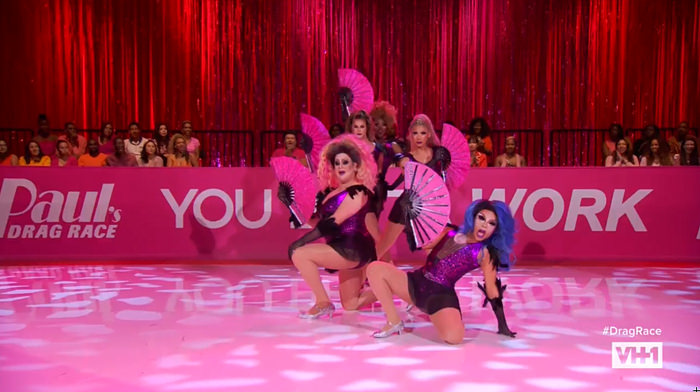 I felt bad for Scarlet who looked like she really tried and at one point she even slipped over which I did feel sorry about. But I guess that’s just part of the competition. She looked like she tried though and God loves a trier.

And that brings us to the runway!

Category is: All That Glitters – Toot or Boot

In true Olympic fashion, the queens were told to come in their best gold-medal glamour for the main stage and most of them delivered some gorgeous looks. 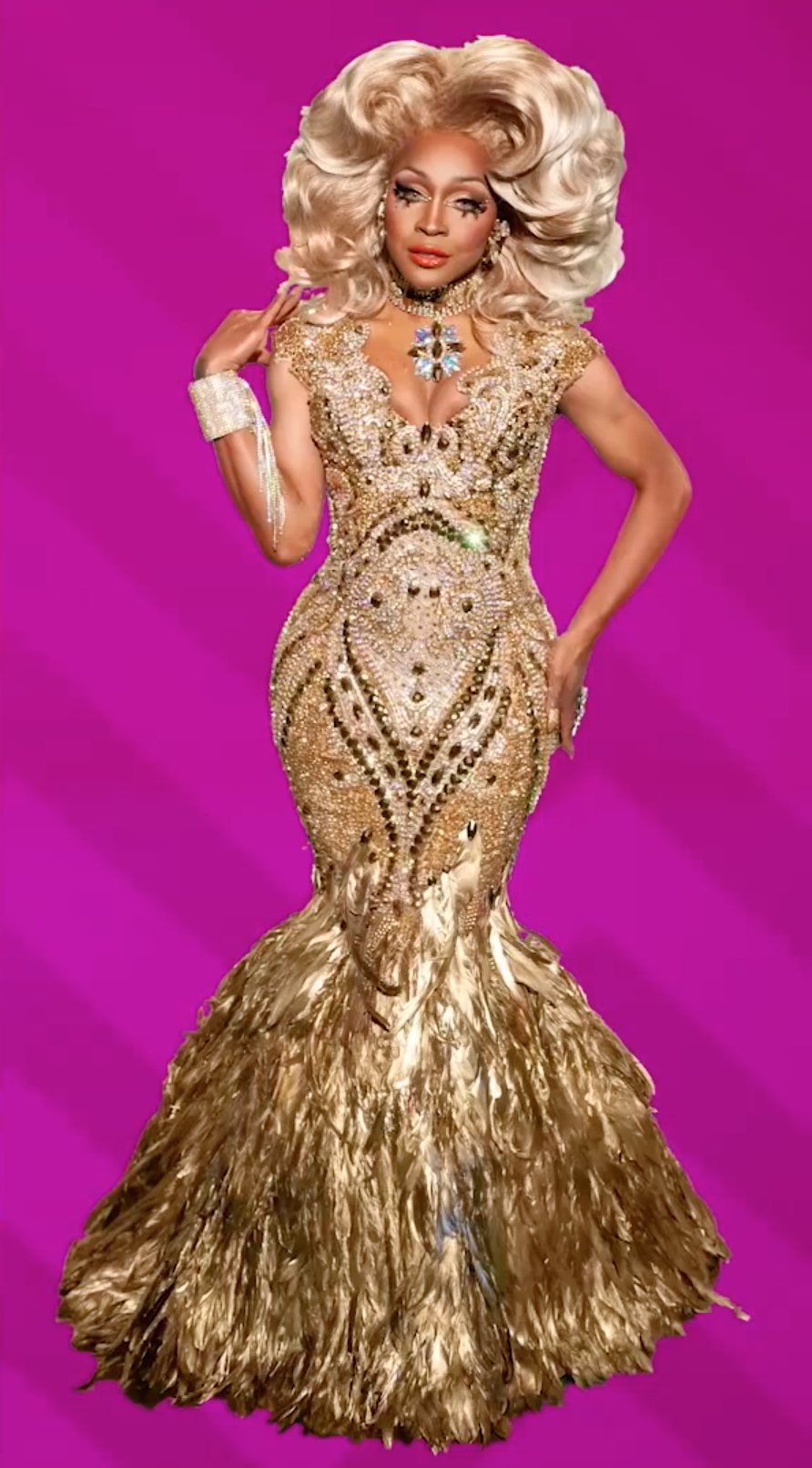 This is fucking lush. I don’t get excited by pageant drag but this is unbelievably stunning. It fits her like a glove, the beading is beautiful and the gold feathers at the bottom of the dress look expensive as hell. This is by far the best she’s looked all season (and she’s turned some pretty great looks). 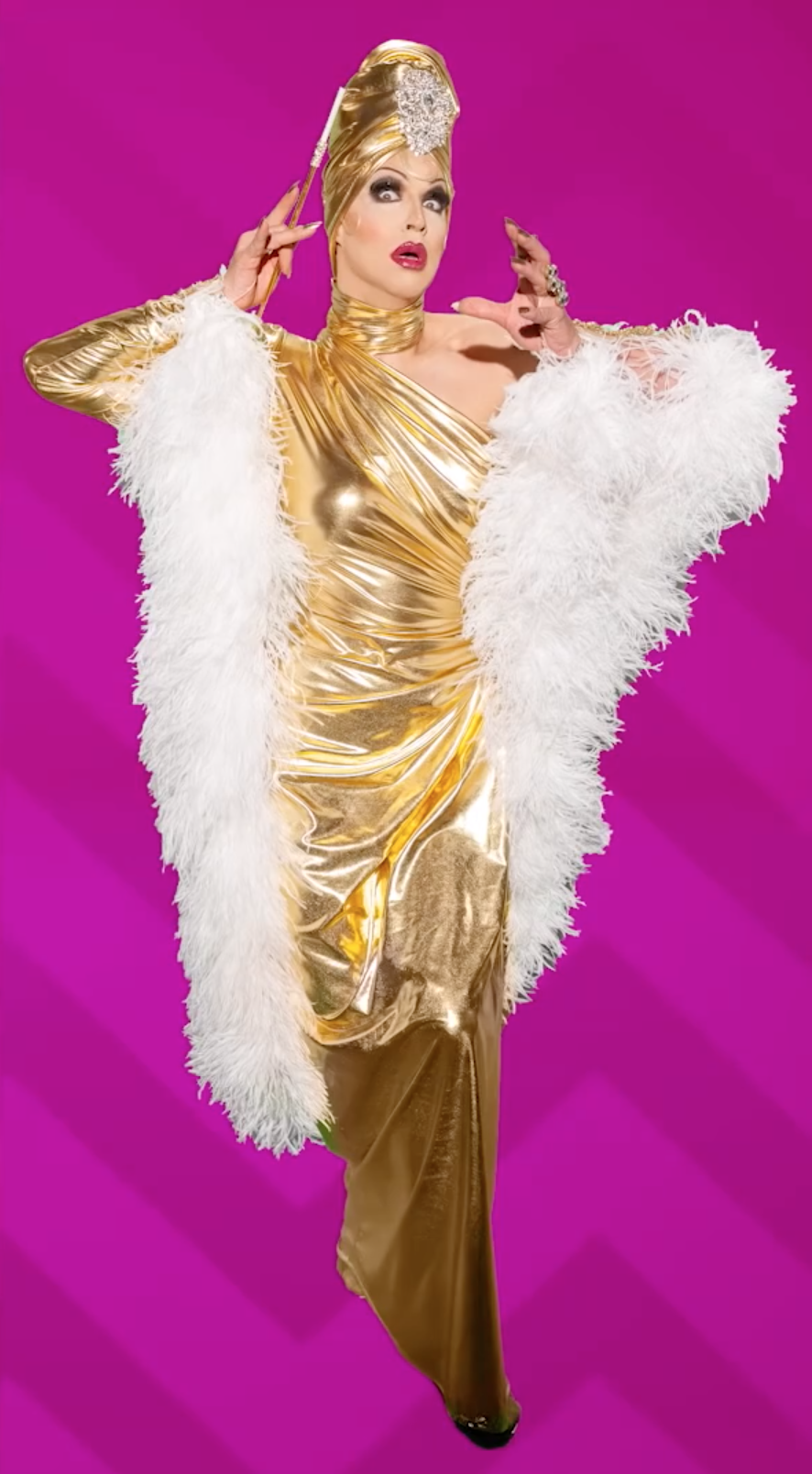 You know I love a bit of camp and this look is no exception. Brooke is serving me an old Hollywood eccentric starlet and I couldn’t be happier with this look. The turban, the feathers and the makeup – all gorgeous. 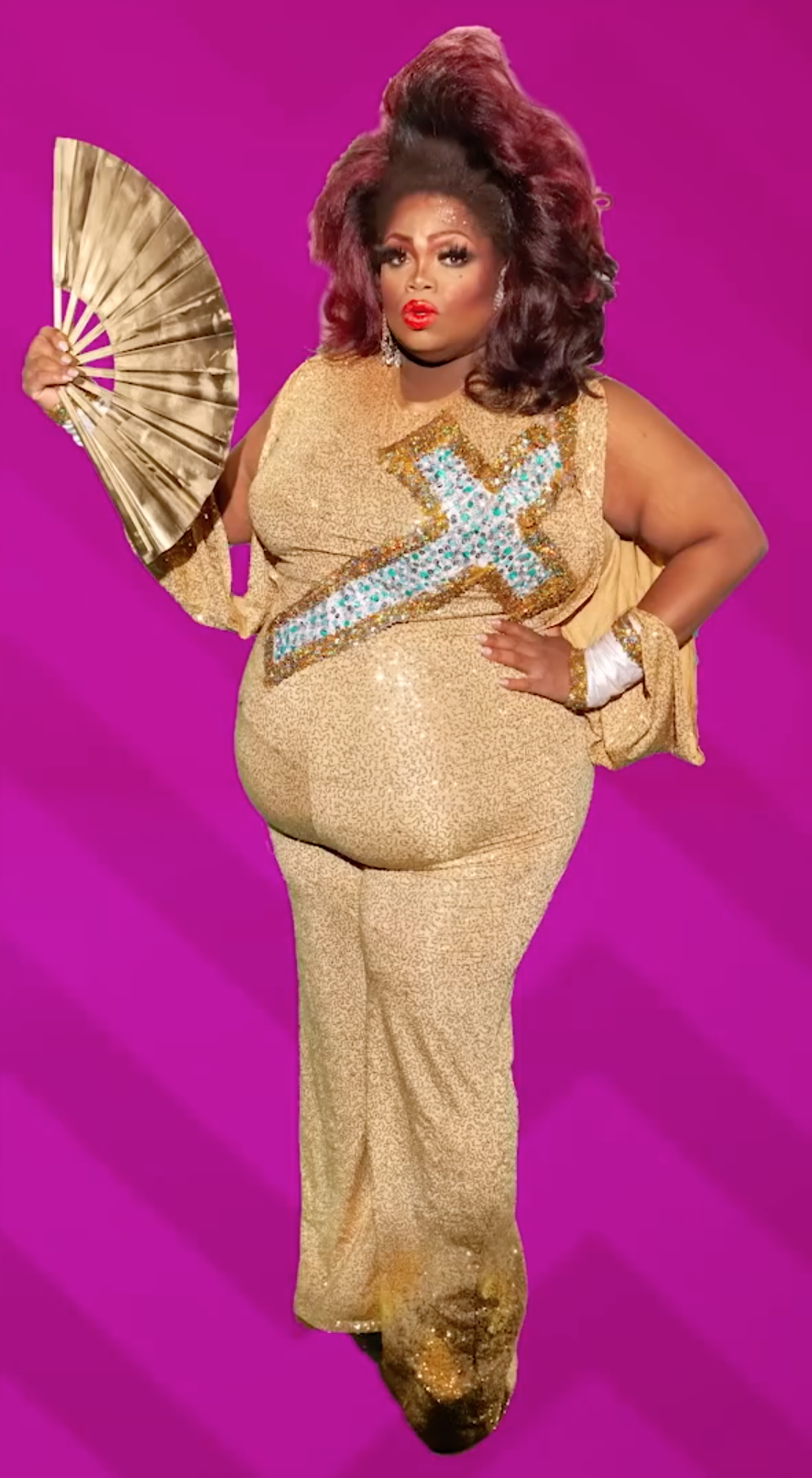 I mean… It’s a really basic gospel church music video costume. Not a fan in the slightest. 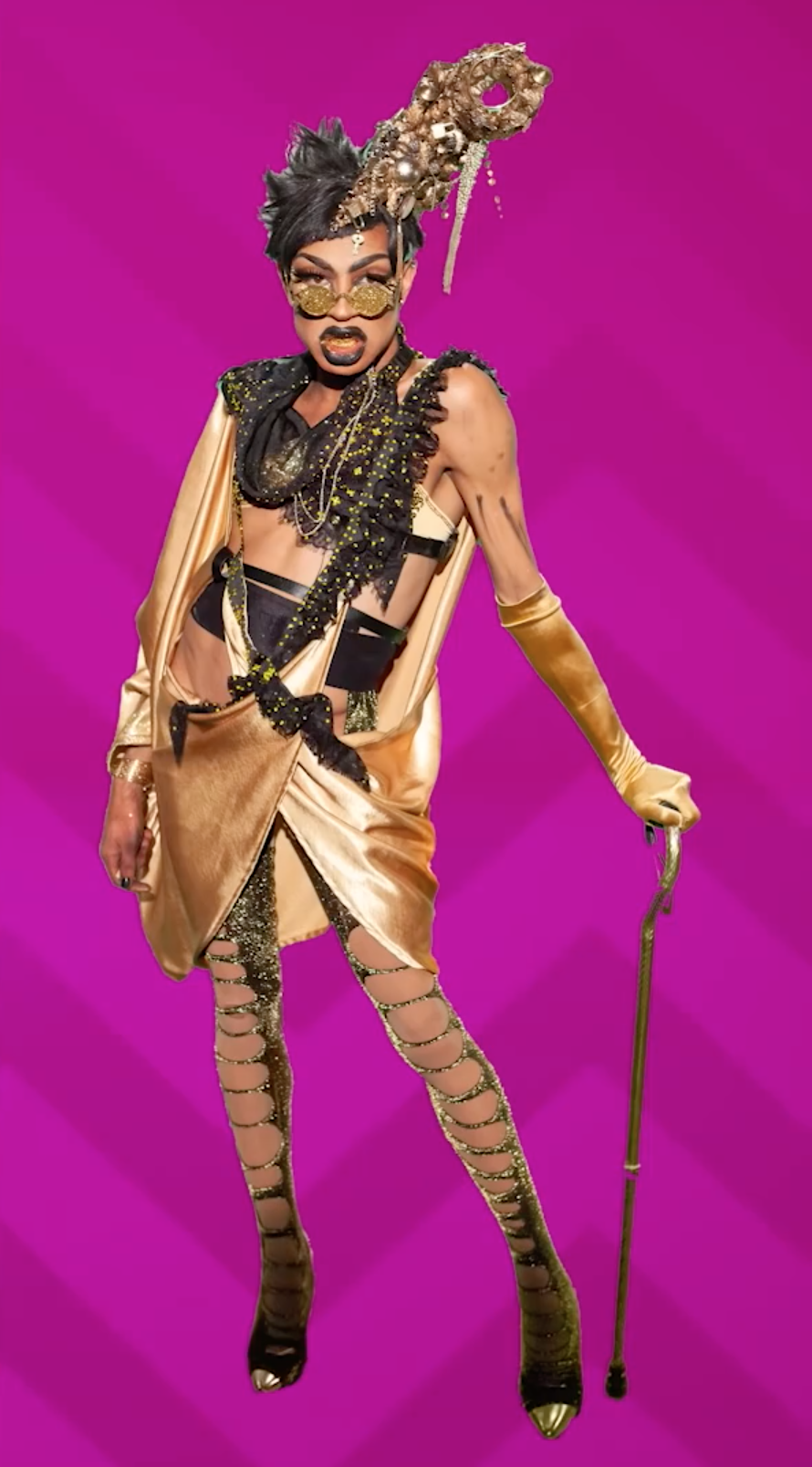 I think this look was a happy accident that I liked it. Don’t get me wrong, it wasn’t the most exciting thing in the world, but the gold teeth, headpiece and glasses were fun. The outfit was kind of basic but the walking stick definitely made it sassier. 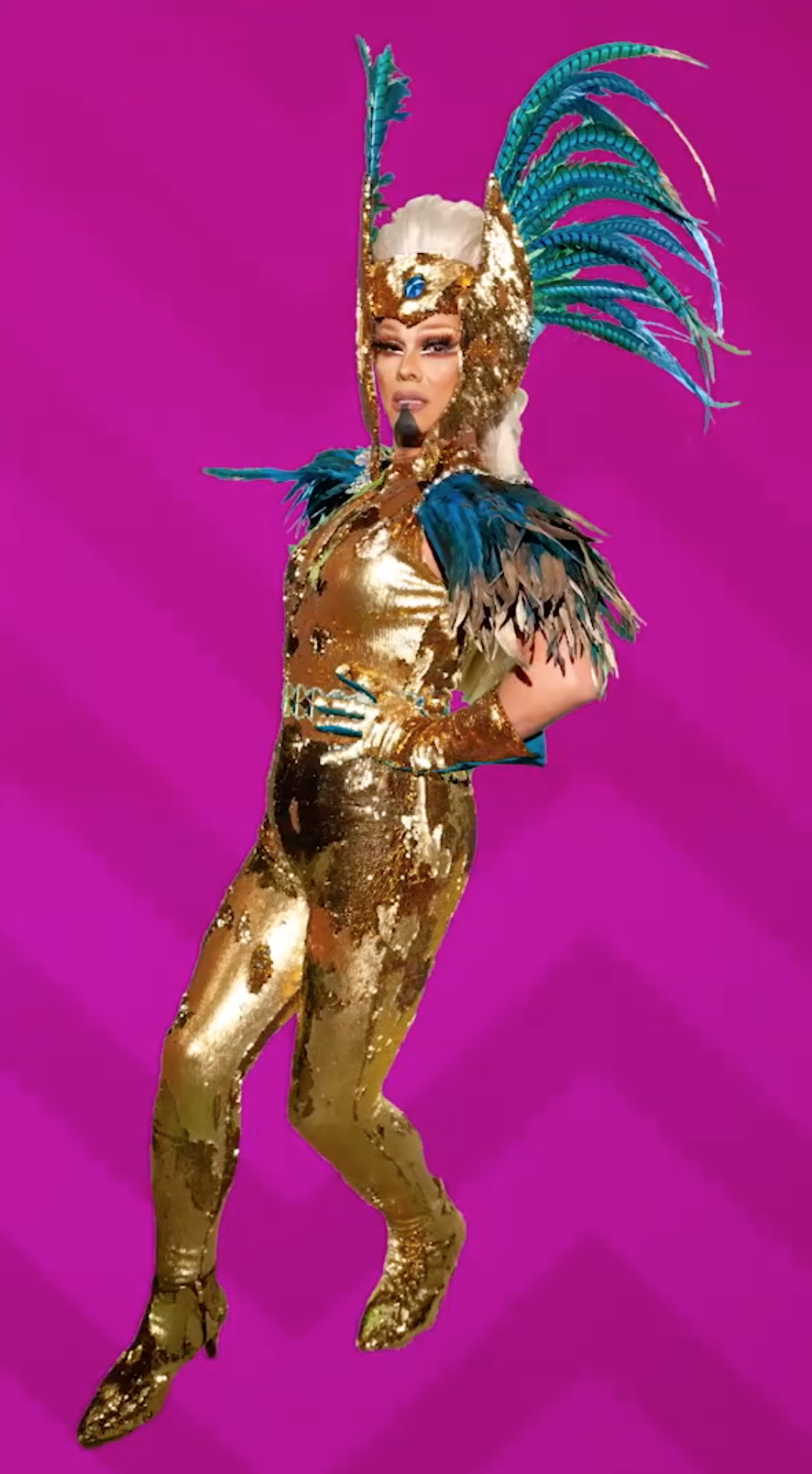 Stunning. It’s high-fashion, fun, carnival sass and overall golden. The blue feathers made a nice contrast to the gold-themed runway. I think this is Shuga’s best look on the show so far. 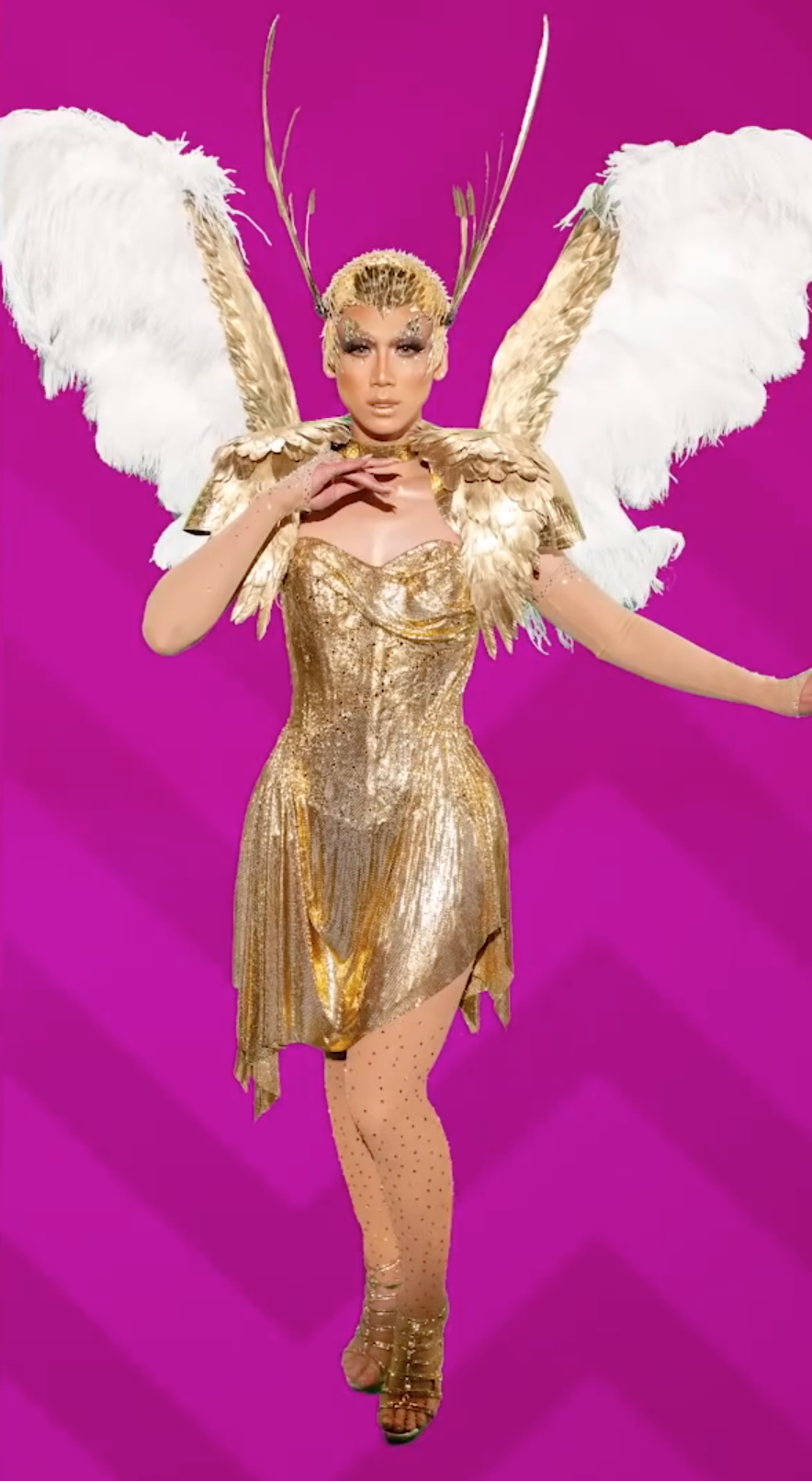 Plastique looks expensive, exotic and angelic. The wings are phenomenal (especially compared to Vanjie’s ones from last week). The headpiece and shoulder details look exquisite and the corset looks stellar. The skirt is alright and the shoes were a miss, but those can be forgiven. 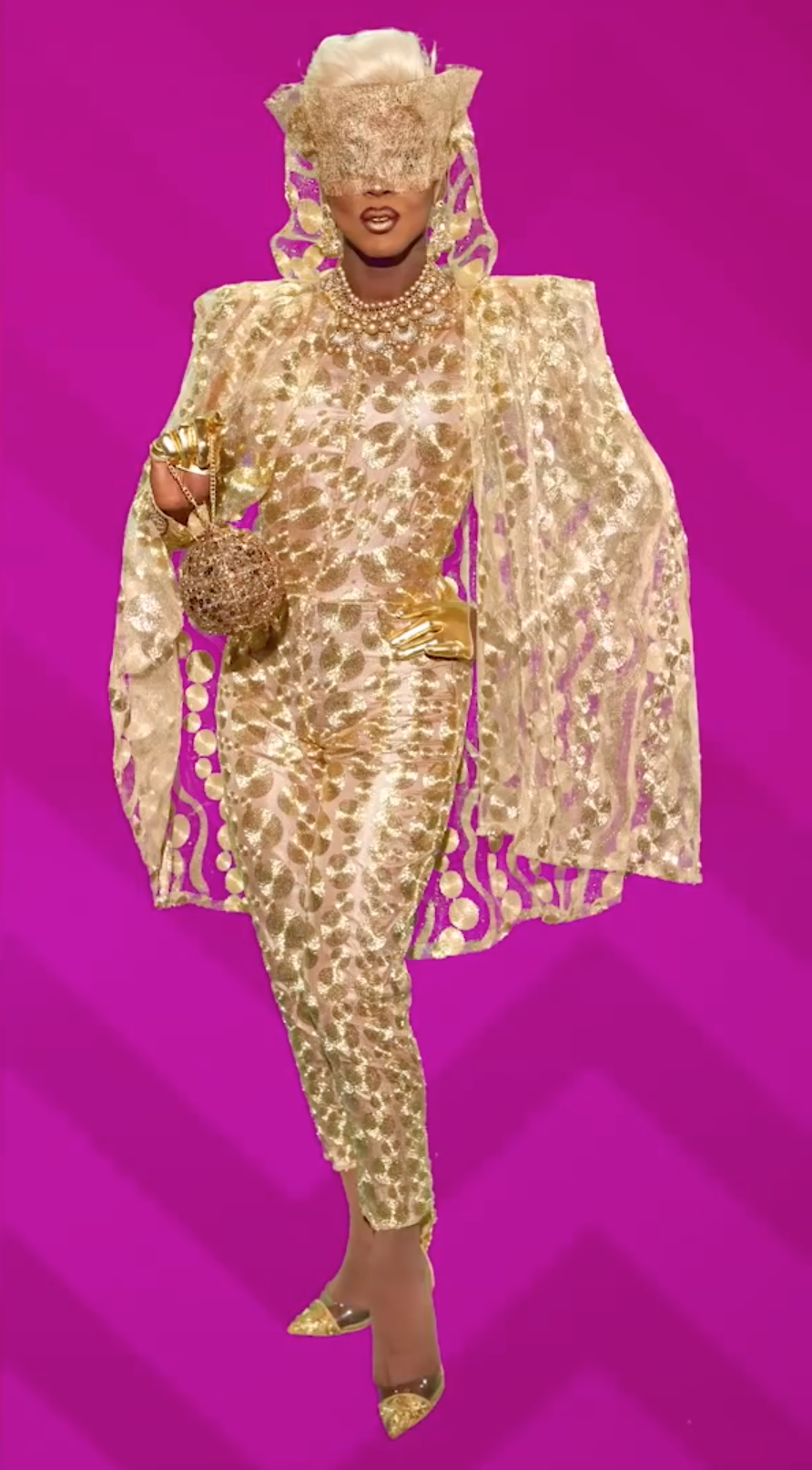 I do like this outfit, but the fact Ra’Jah has worn a lot of jumpsuits makes me only like it, not love it. However, the pattern was nice the cape was fun and I wasn’t mad about the weird face visor thing. It just wasn’t the most thrilling. 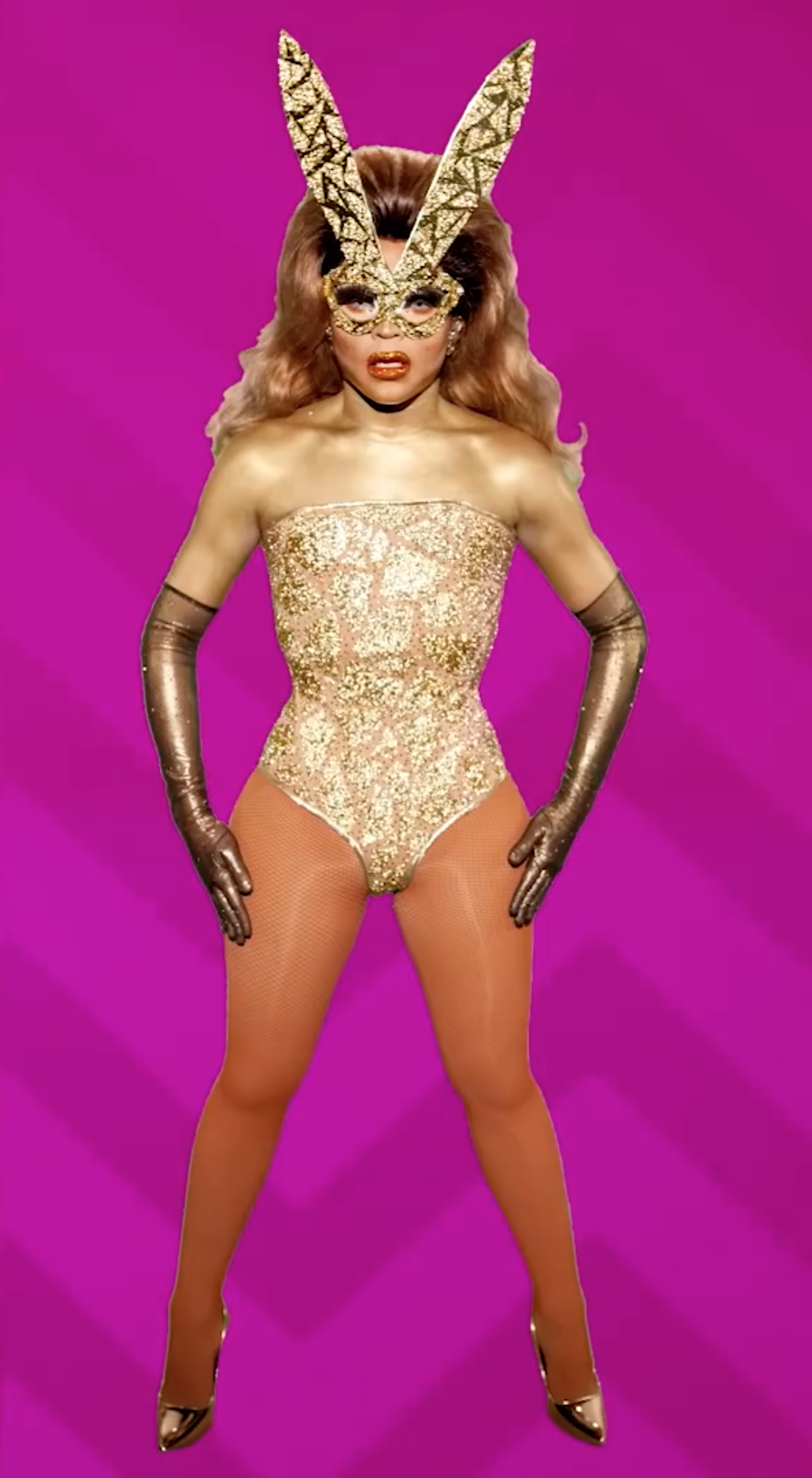 If my point wasn’t made before, it has to be now. This has to be one of the shittest looks of the season, if not this episode. The gold paint up top makes her legs look weird – if you’re gonna paint gold, paint your whole body gold! This was a huge miss and for some reason, she keeps getting overlooked because she had a semi-amusing catchphrase that made her 1 episode seem like she was the star. 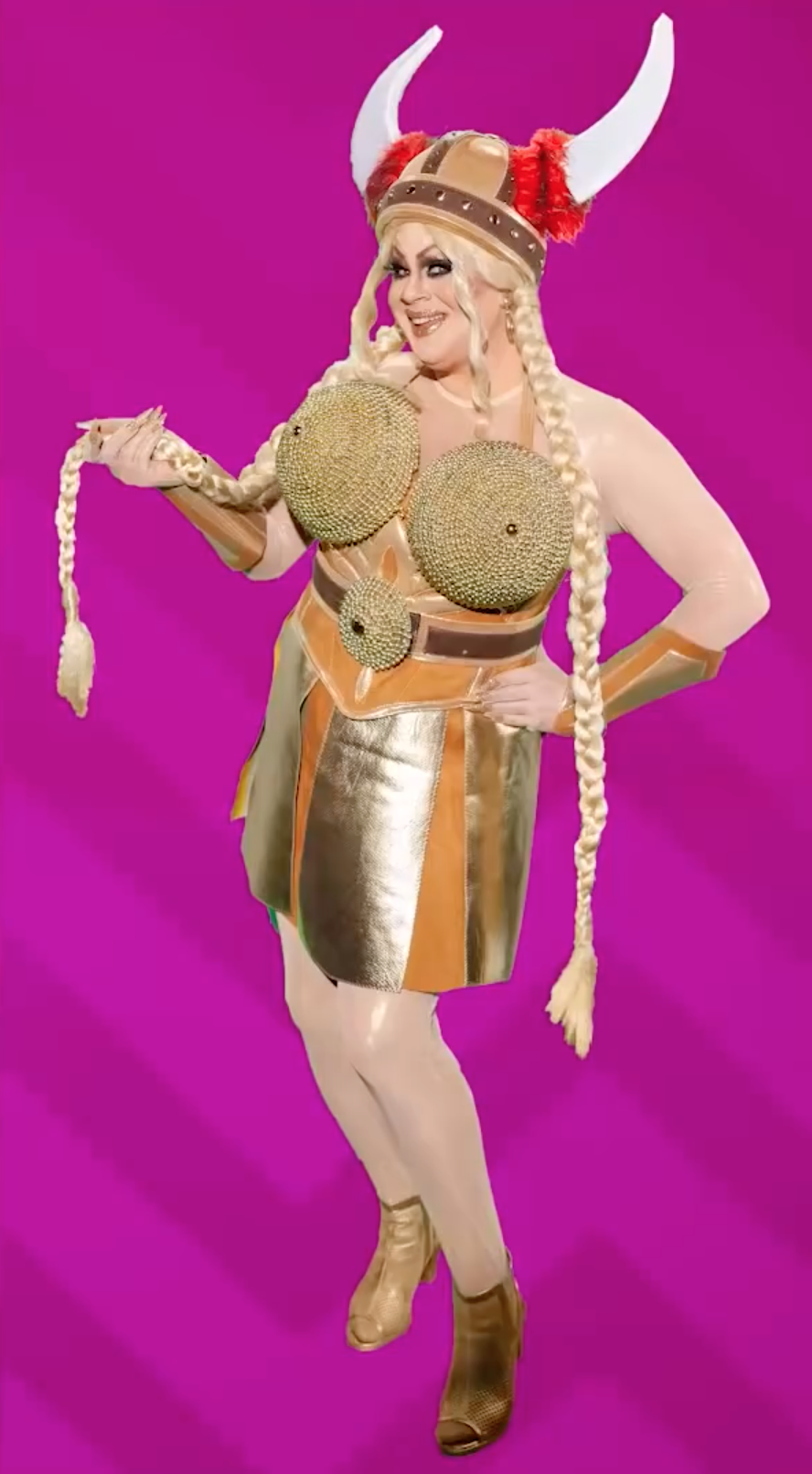 ‘It’s not over until the fat lady sings’ and Nina brought the look this season. It was camp, theatrical and a beautiful nod to classical operatics done in a gorgeous flamboyant drag way. 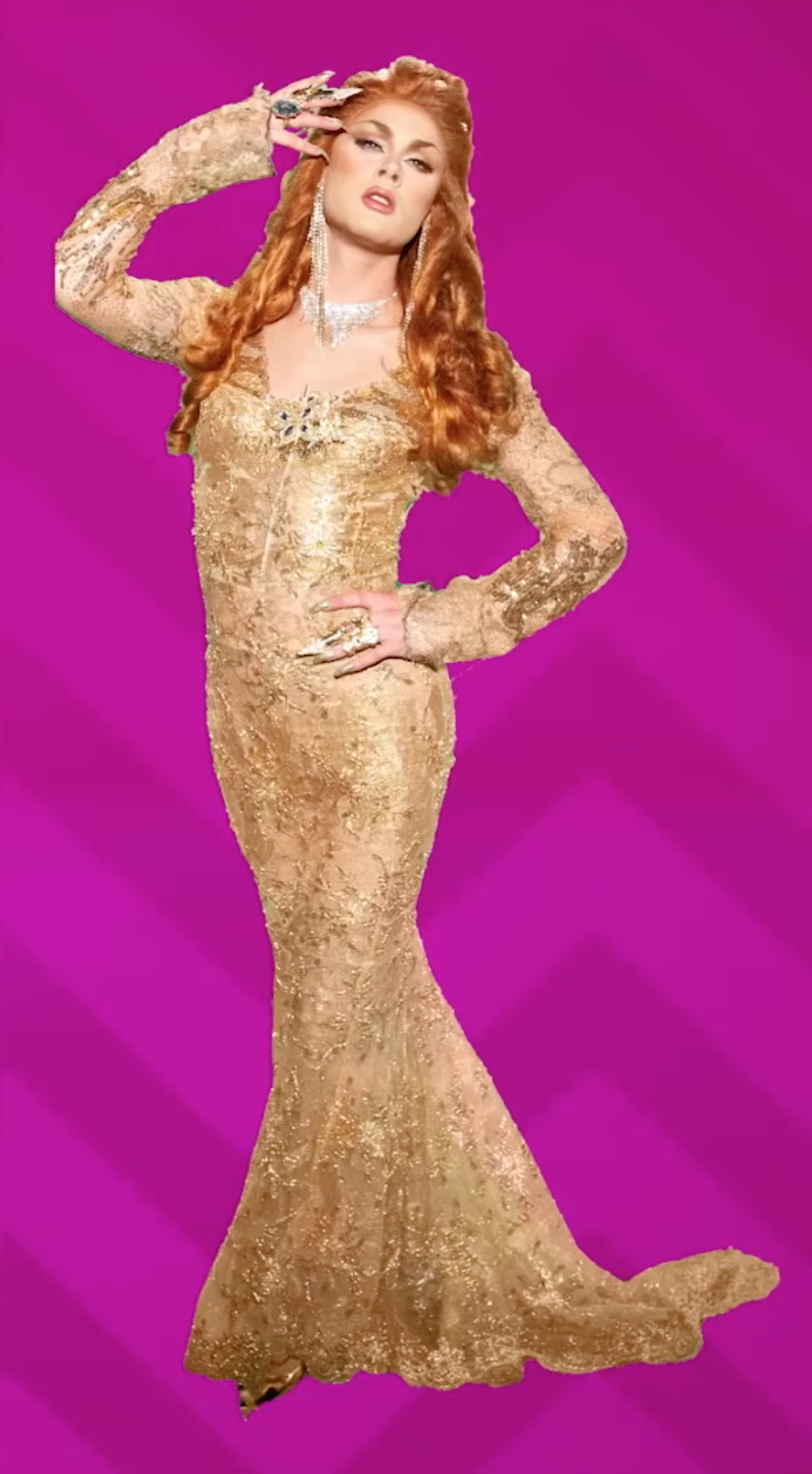 Scarlet doesn’t look terrible, but she’s looked better. This was a pretty plain look in my eyes. Nothing really to write home about. 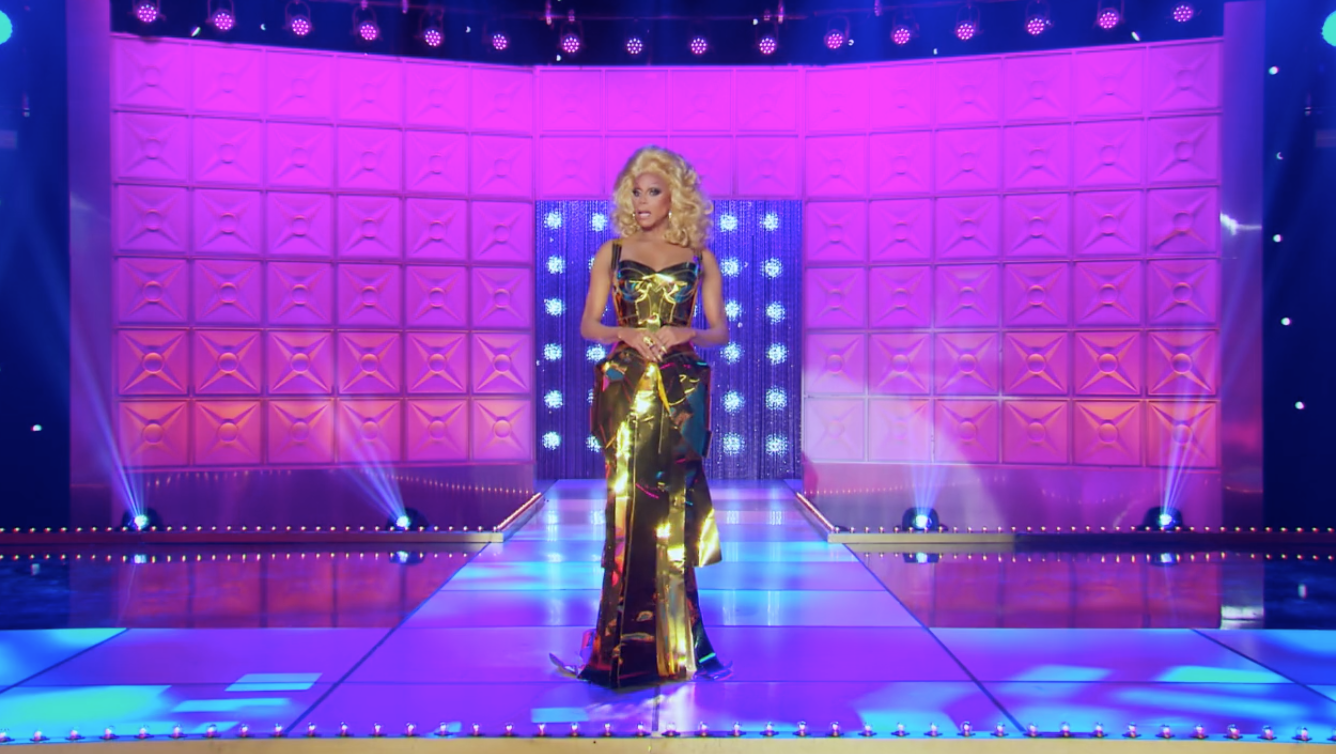 I have to admit, when I first saw Ru’s outfit I thought it was really cool but then when he started walking, I realised it was made of paper, not metal and in motion, it began to look really cheap and underwhelming.

Team Tuckpantistan won the challenge (no surprises there) and A’Keria was the overall winner this week for steering the ship. 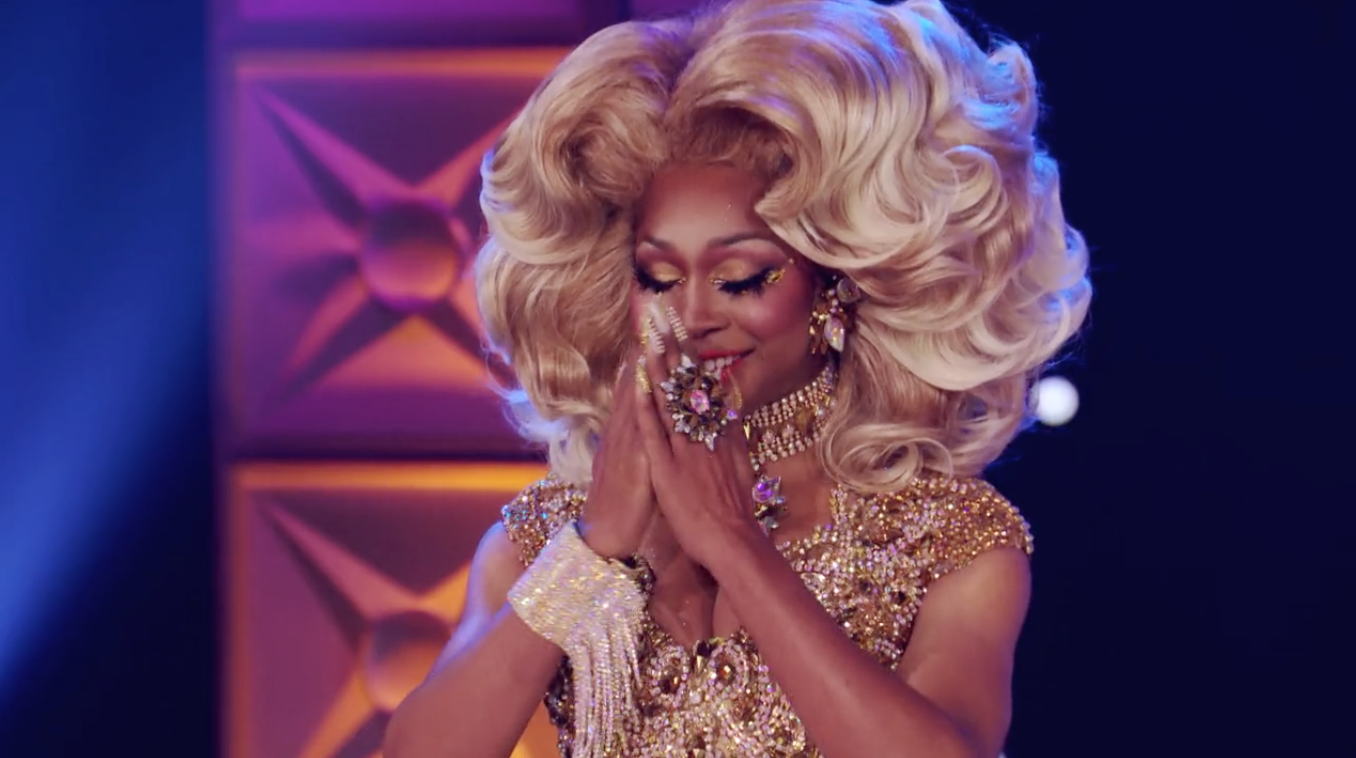 The other team were in the bottom but in the end and Ru asked the dreaded question, “Who do you think should go home?” and poor Scarlet was chosen by every queen. Scarlet chose Ra’Jah and Ra’Jah didn’t seem to take it well but that’s because she’s pure deluded and hateful.

This is the point where it really boiled my piss, I think this lipsync was a shambles. But not because the queens did bad, but because the outcome was a joke. I cannot be the only one who thinks Scarlet was robbed?!

My reaction after finding out that Scarlet had to sashay away:

I had to rewatch the lipsync a couple of times because something didn’t look right and I’m so glad I did because when I watched it back my suspicions were correct – it looked like Scarlet was being bullied by Ra’Jah. Remember the ‘air guitar’ bit, watch it again – Ra’Jah legitimately elbowed (quite forcefully) Scarlet before just accepting that she was there.

Another bit was when Scarlet threw her glitter in the air while Ra’Jah was off the stage (something I thought was banned) and Ra’Jah gets back on stage and starts dancing in Scarlet’s glitter fall – basically pushing her out of the way. As you can probably tell, I don’t like her. She makes The Vixen look like an ambassador of peace and harmony. 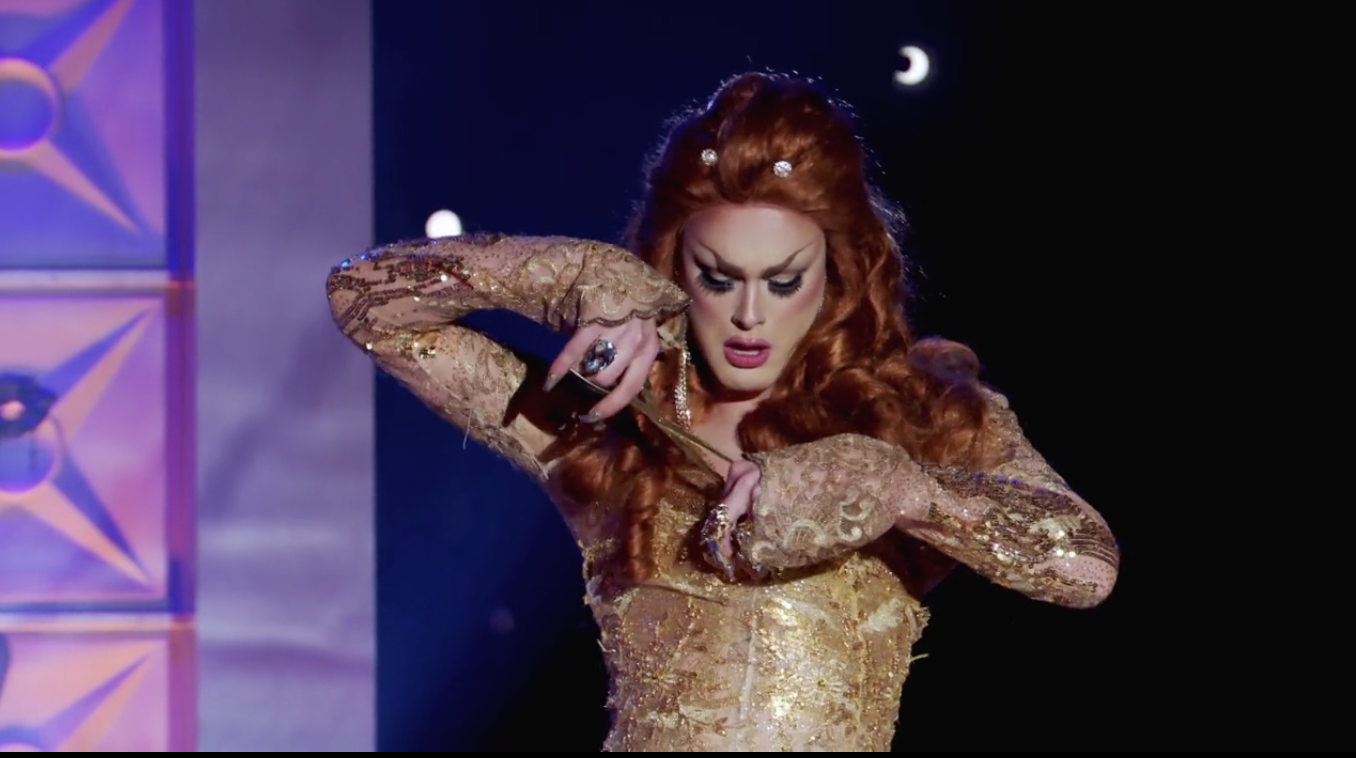 I even felt the show edited the lipsync in a way to make Scarlet look worse in order to have a reason for keeping Ra’Jah. They spent too much time on one cut of Scarlet using the scissors on her dress and took the focus away from the glitter. I don’t know why Ra’Jah was even kept?! Drama? Her drama is boring, she’s just bitter and severely delusional. 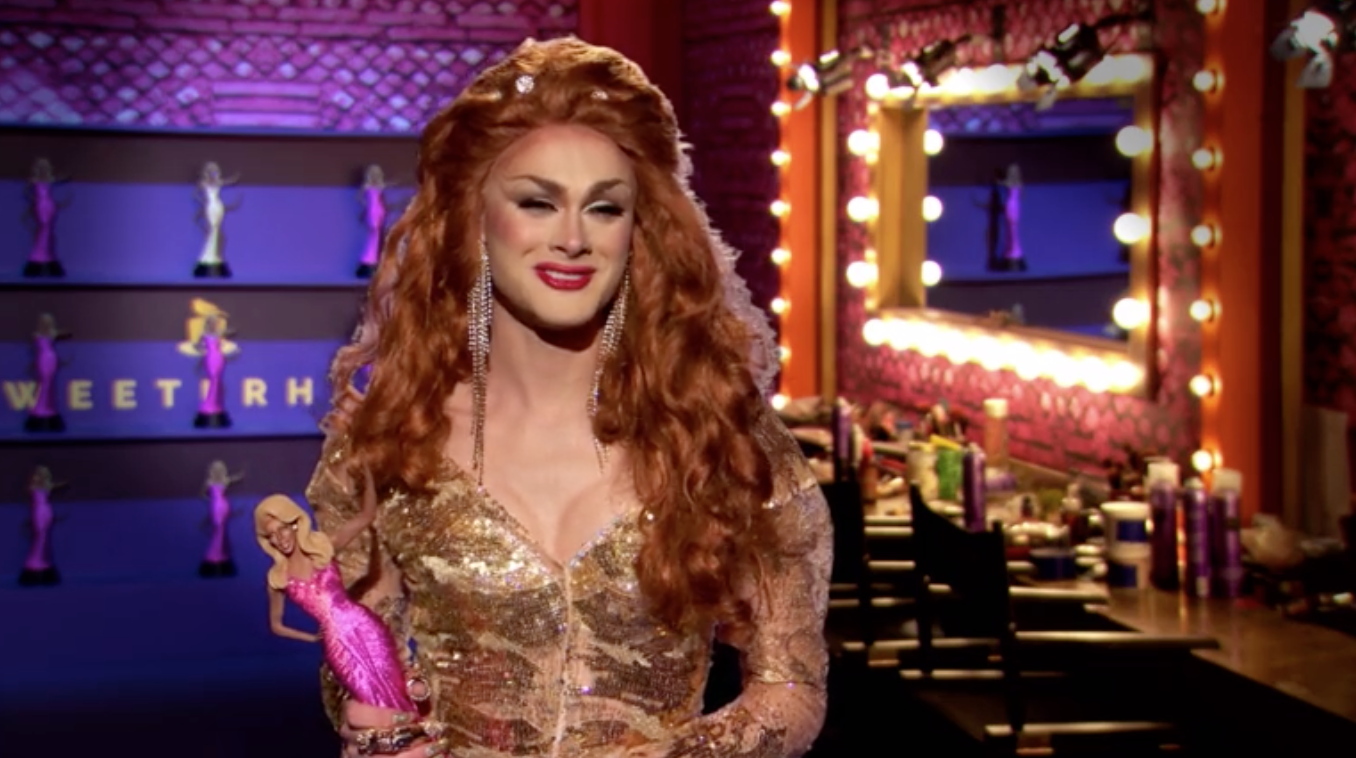 Scarlet’s not mad though, she’s got the best edit and people love her. She could quite easily be this season’s Miss Congeniality and I would welcome it with open arms.

This week, I gained 6 points which took my total to 44 points and Tom got 10 points which brings him to 34 points. Vanjie remains on 8 points. Frankly, I was gutted about Scarlet this week, although it was a relatively good episode, the outcome was disappointing. 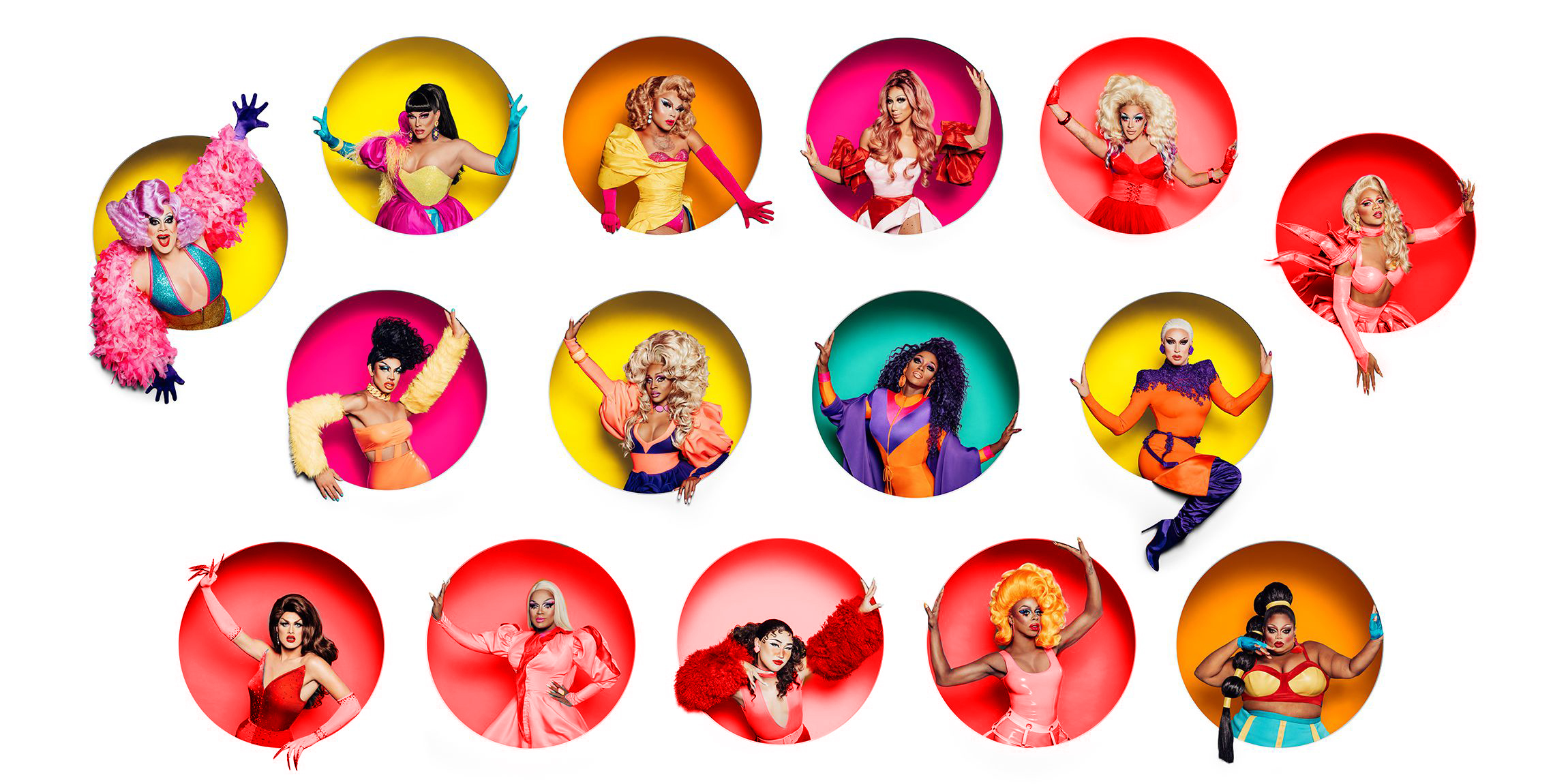