From political satire to spooky attire, it’s time for the Monster Ball! Yes, we knew there would be a ball on the cards and this time, the show decided to do it a little early so we can see what the queens’ standards are.

In theory, this should be Yvie’s week, she’s a spooky gal at heart. Ones you may expect to do poorly; Plastique, Silky and Ariel.

Category is: Trampy Trick or Treater – Toot or Boot

The first category is exactly what it says on the tin, a hooch out to get some candy. 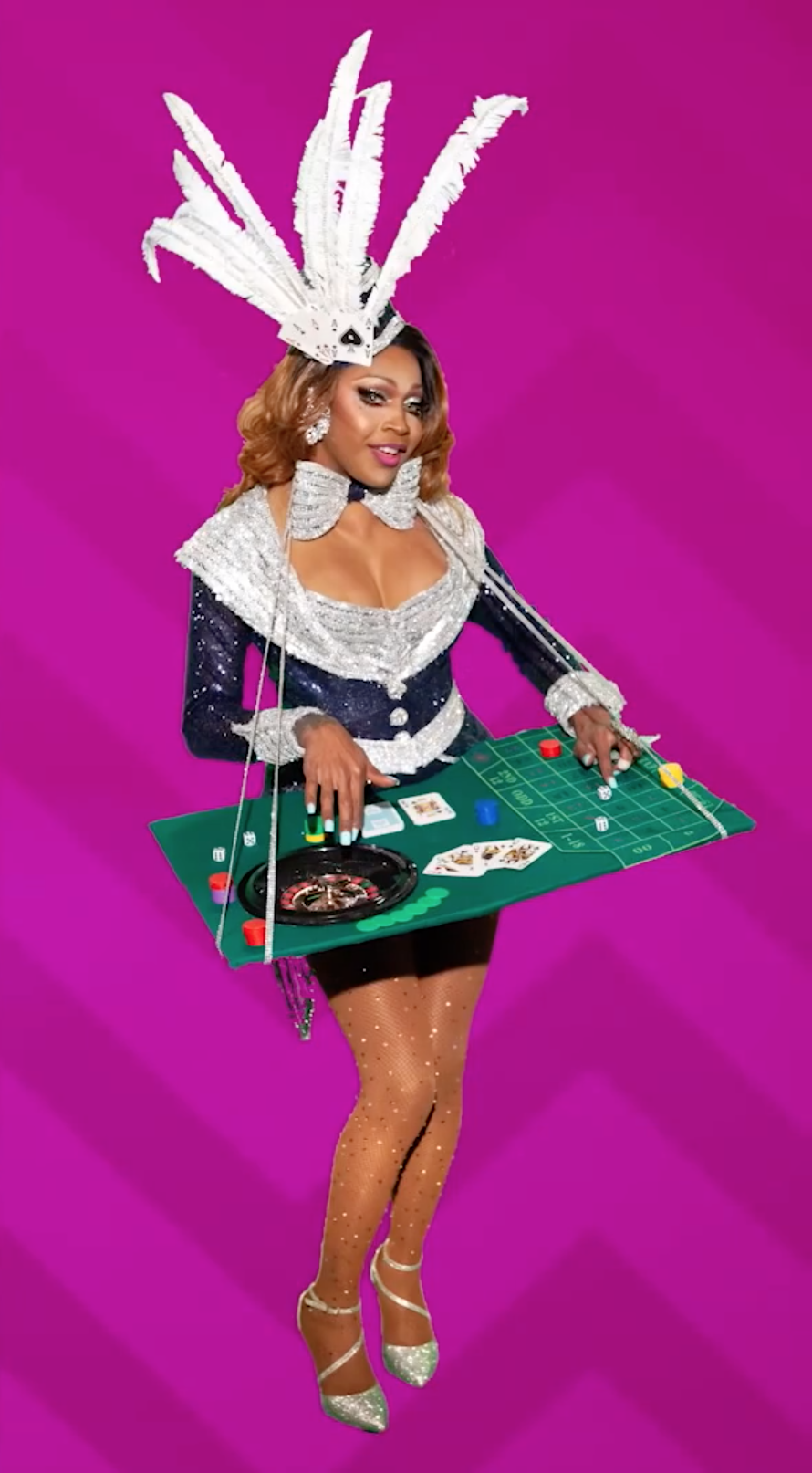 I love this fun take on being a ‘dealer’ for Halloween. She looks elegant, recognisable and the prop was a fun idea. 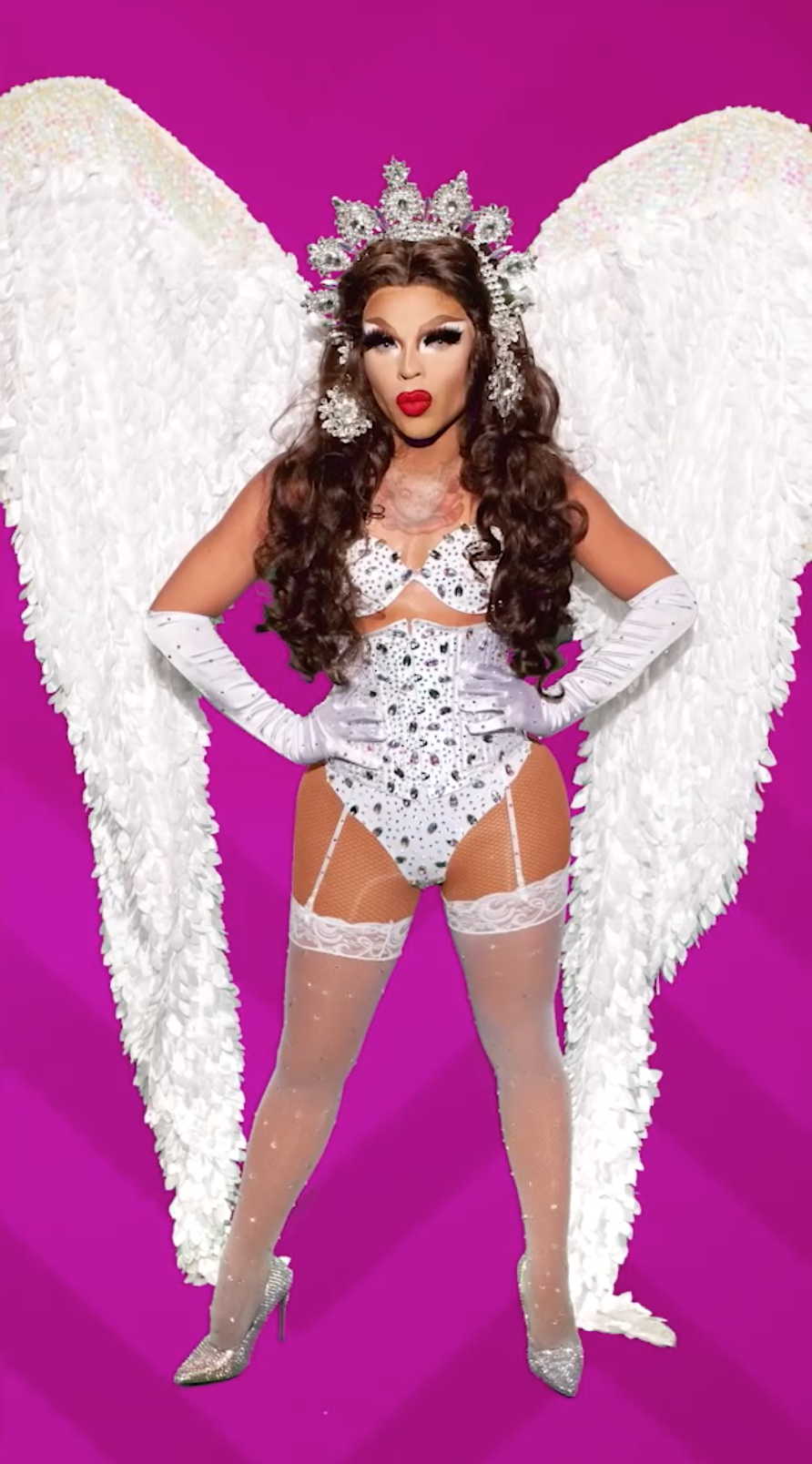 If you’re going to do big angelic wings, I fear the standard will always fall with Courtney Act’s incredible runway look and sadly, Vanjie’s look falls short. It’s also just another outfit in stockings and a bra, I’m not wowed. 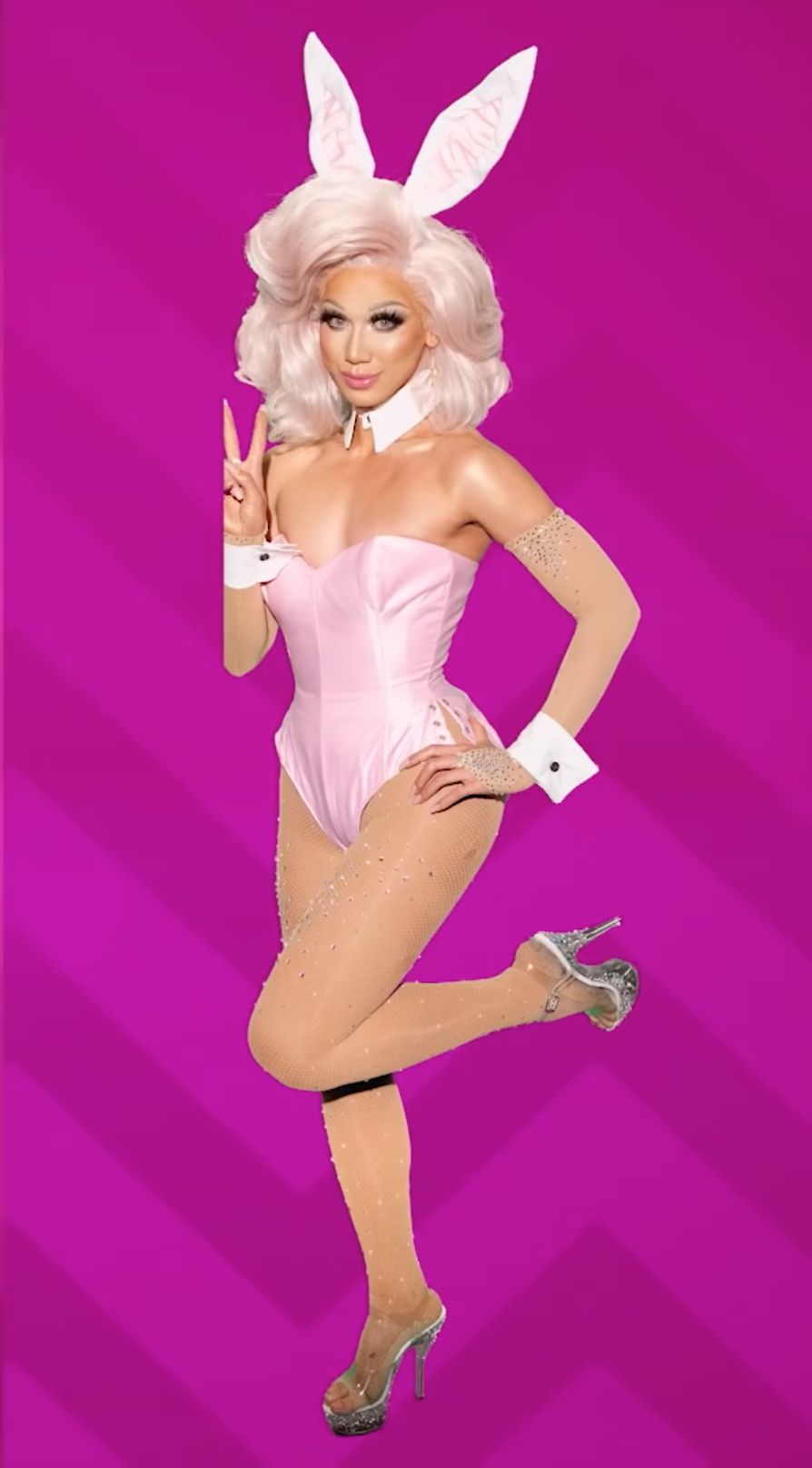 Honestly, this was my favourite look of the episode. It’s not the most exciting but the whole Playboy bunny aesthetic was perfection. The corset fit beautifully, the wig was brilliant, her makeup was gorgeous and she definitely nailed the ‘trampy trick or treater’ theme. 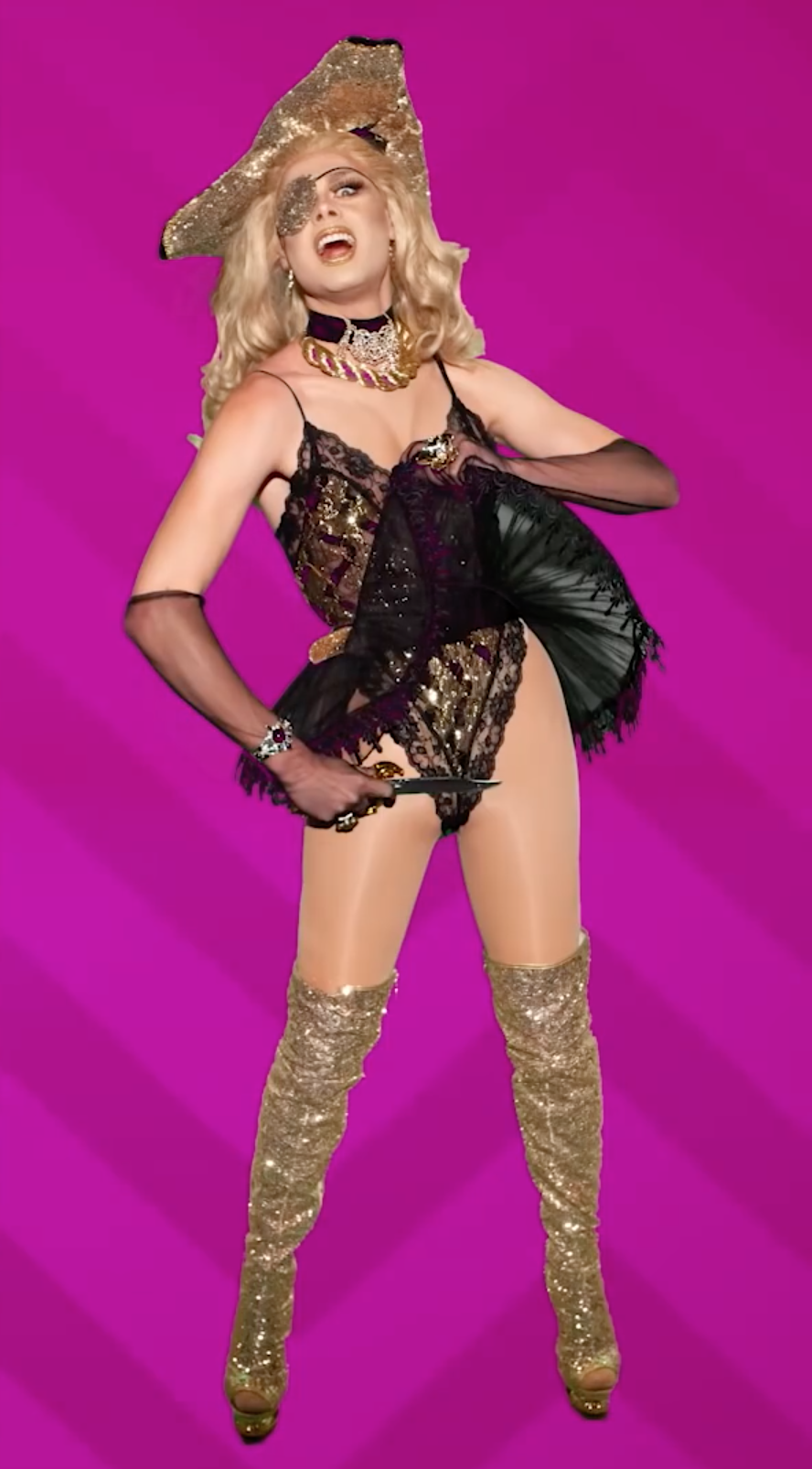 It was fun, it was cheap, it was Halloween-y but I can’t say it was a well-executed outfit, it was pretty minimalist. 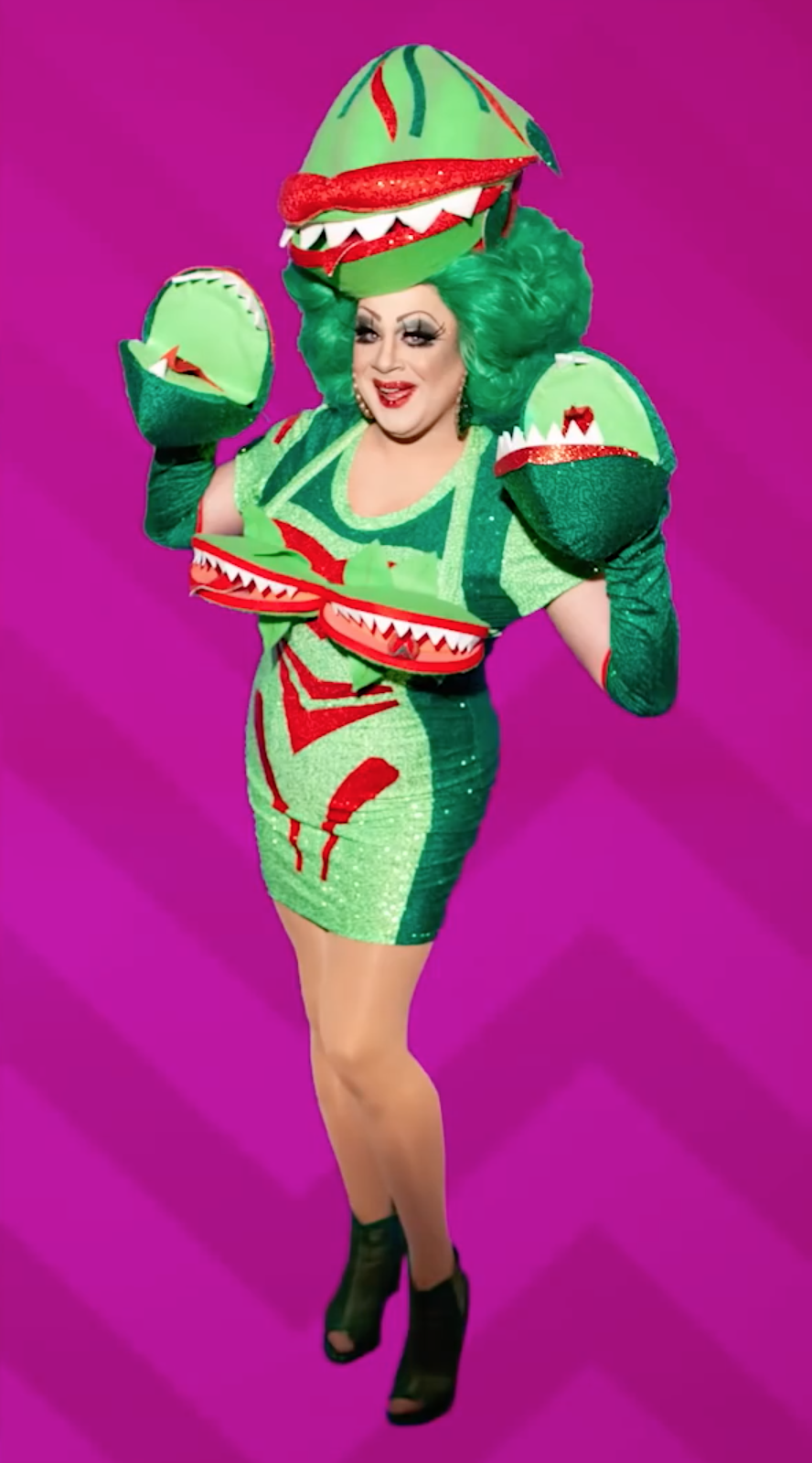 This, this is a costume! I love Little Shop of Horrors and so this outfit was a massive hit for me. Don’t get me wrong, I love a good fashion queen, but I also can’t get enough of a good bit of campness in my queens and Nina has that in spades.

This was such a bland outfit. I like the cotton candy coloured straps of the corset but overall I find it to be quite disappointing. The mask was terrible. 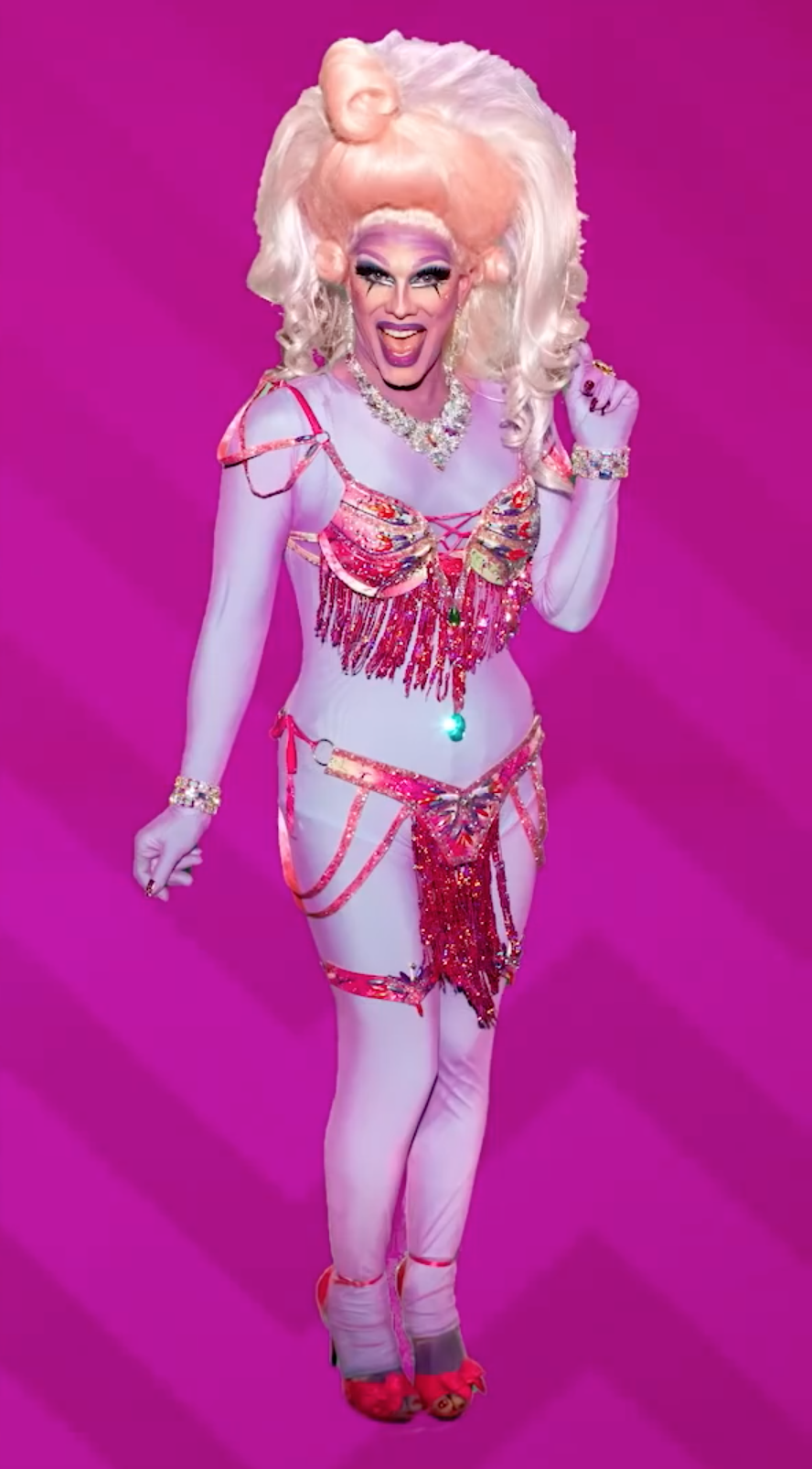 As much as I love Shuga, this outfit was a complete miss. The Trolls reference was lost on most because she looked like a whorish genie.

Loved this, it was pretty simple but beautifully executed. It was sexy, revealing, legitimately a trick or treater style costume and to do it all on ballet pointe was a treat to watch. 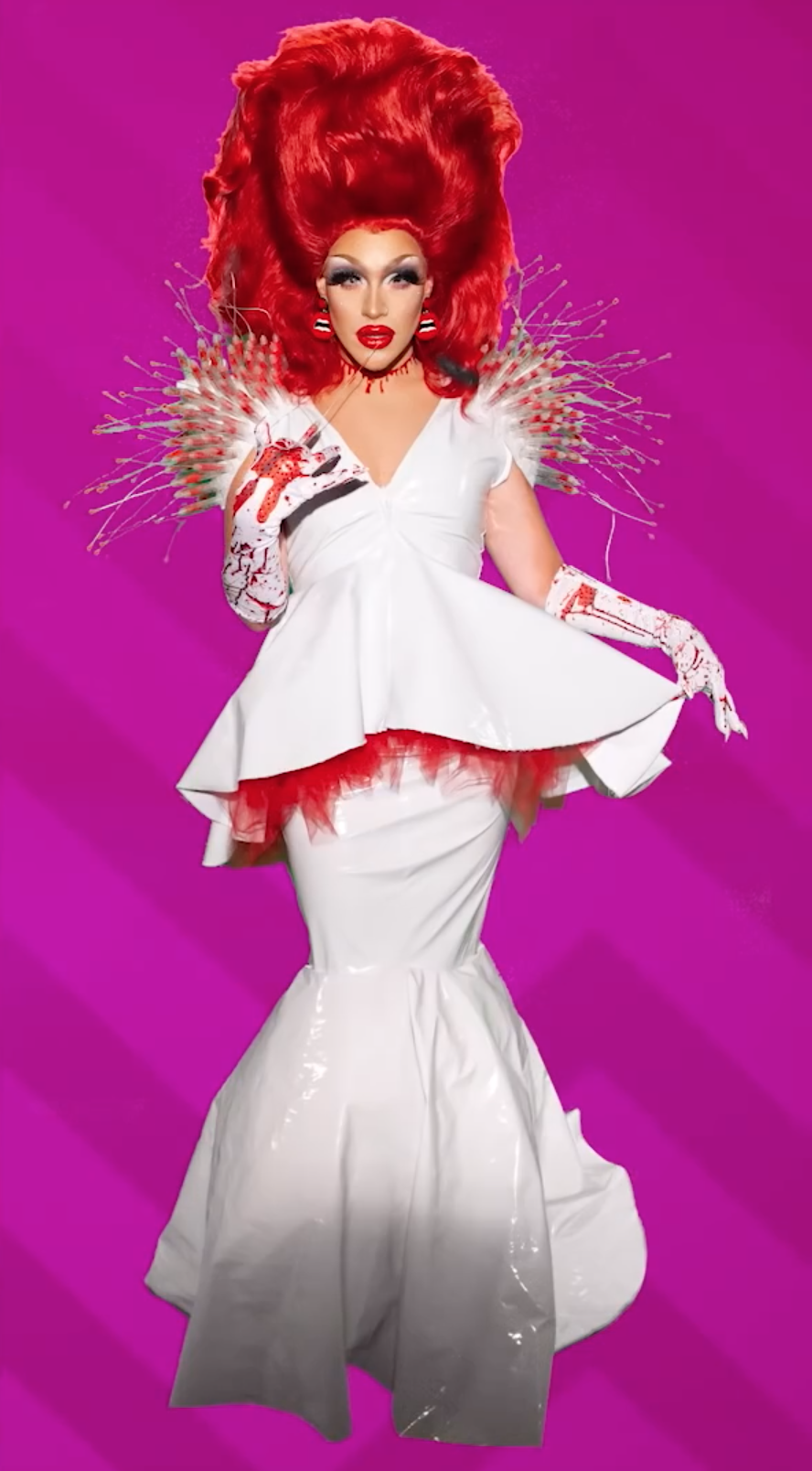 I really liked this. The white PVC dress made a nice change to the dark, spooky looks we’d seen. The red wig, bloody gloves and syringes were a fun detail. It wasn’t the best outfit in town but it was pleasant. 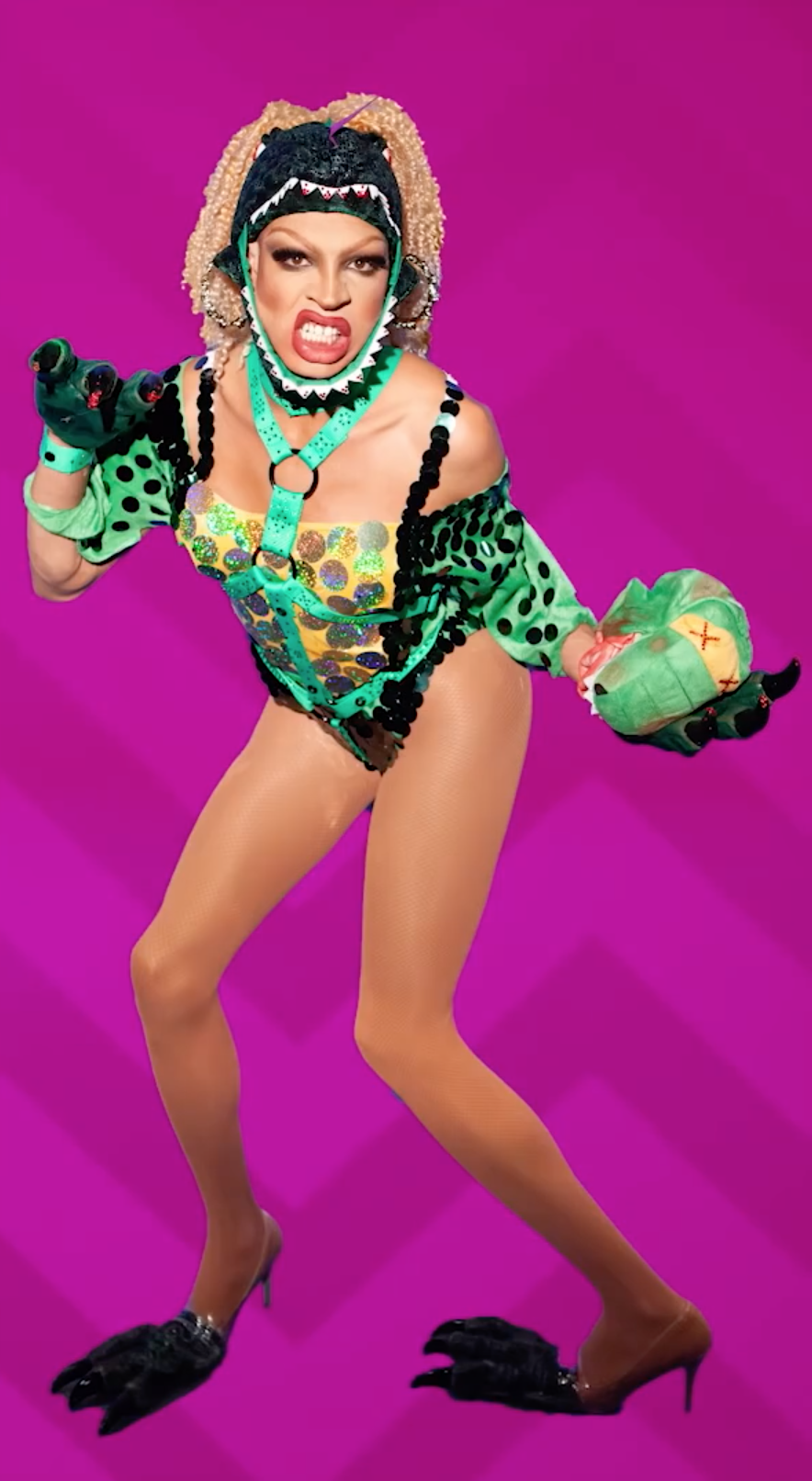 Brilliant. Yvie literally used a kids Halloween costume for her trampy trick or treater look. The dinosaur claws on the heels was a a hoot. Bravo. 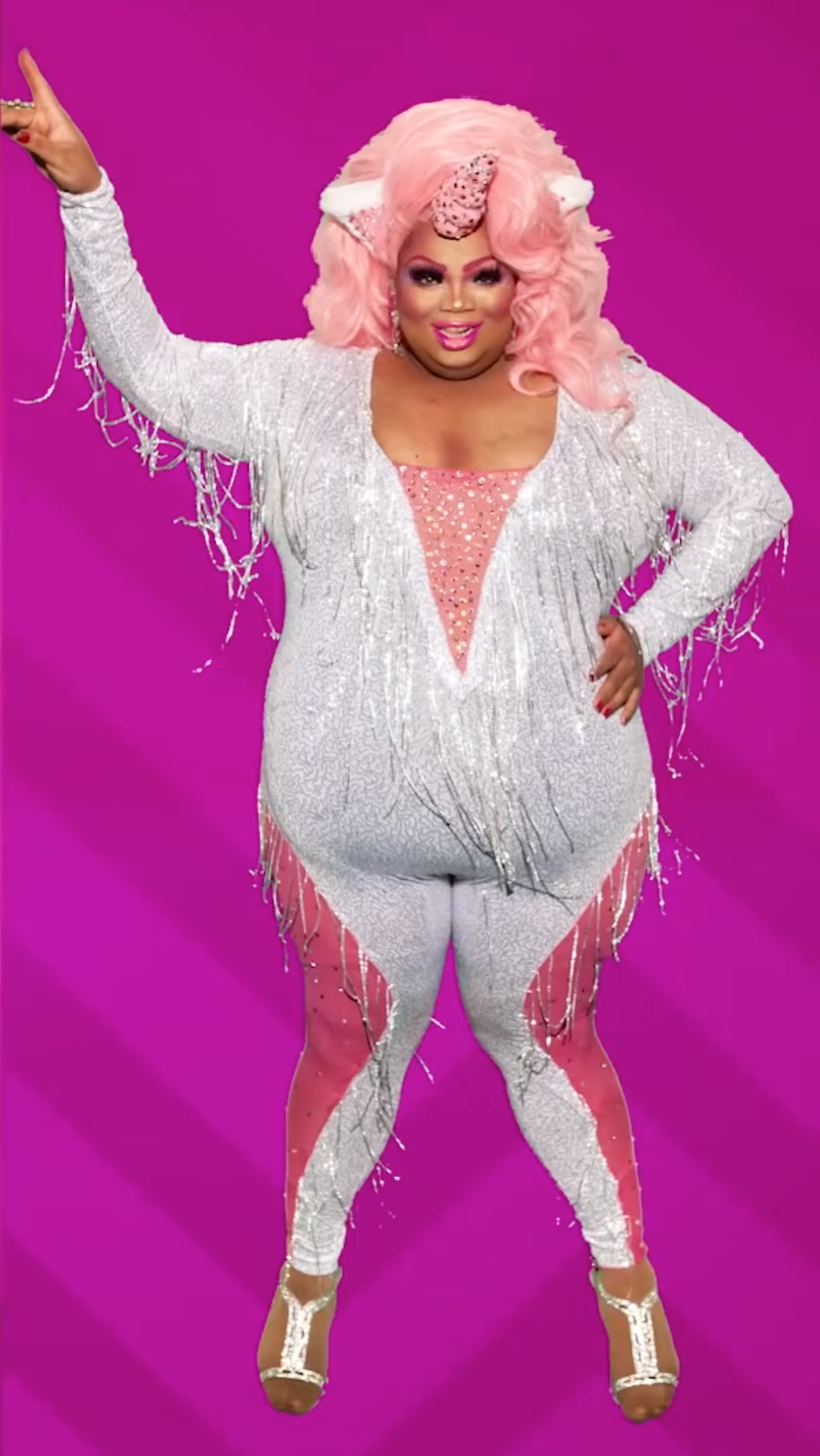 I mean… It isn’t flattering, it bunches in bad places and it was a bit of a generic outfit.

For the second look, the queens had to present their best witch inspired attire. I was actually quite pleased with how different each queen’s looks were. It seemed that they all had completely different reference points. 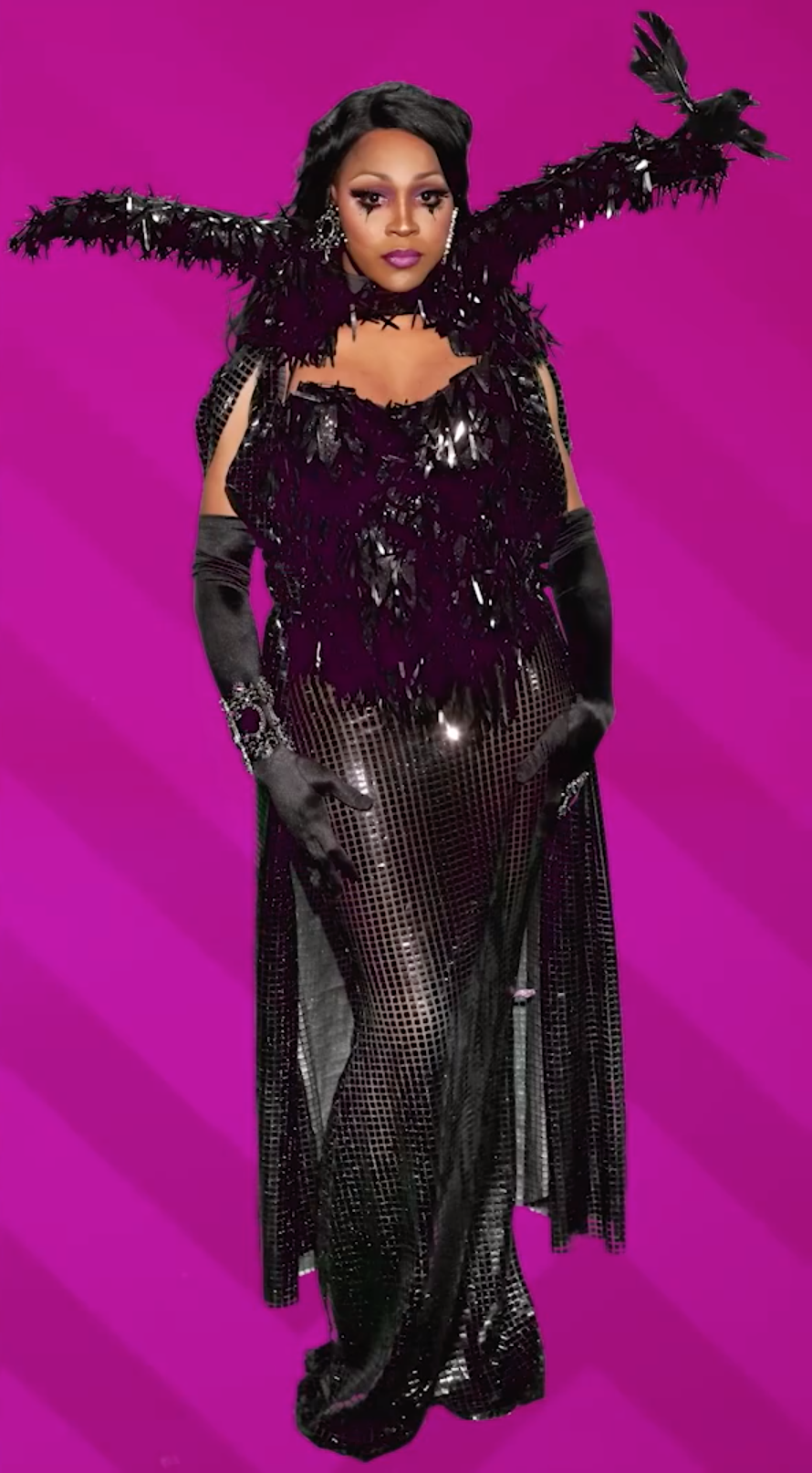 This wasn’t the most exciting outfit. Just a pretty generic black costume and to be honest, it doesn’t particularly read as a witch.

She doesn’t look bad, but this isn’t particularly exciting in my eyes. I like the wig though.

What a woman! This looks great, the headpiece is sassy the corset fits well and one day, just one day, she may way a dress that covers her crotch. 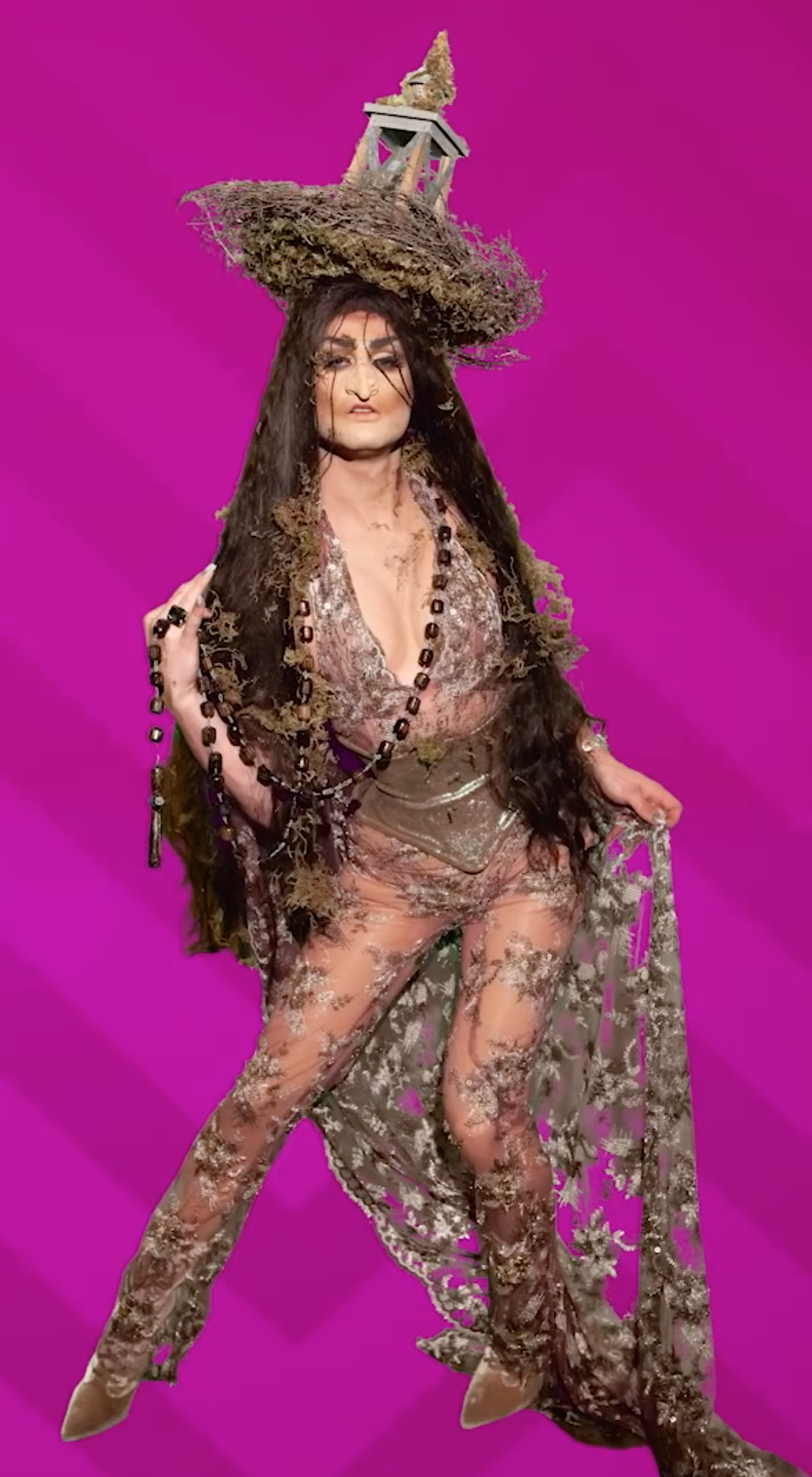 As grotesque as this is, I absolutely love it. The fake nose, the fabric, the headpiece – all of this is a great witch costume. It’s a Monster Ball for god sake, they don’t need to look sexy, they can look gross and goulish! 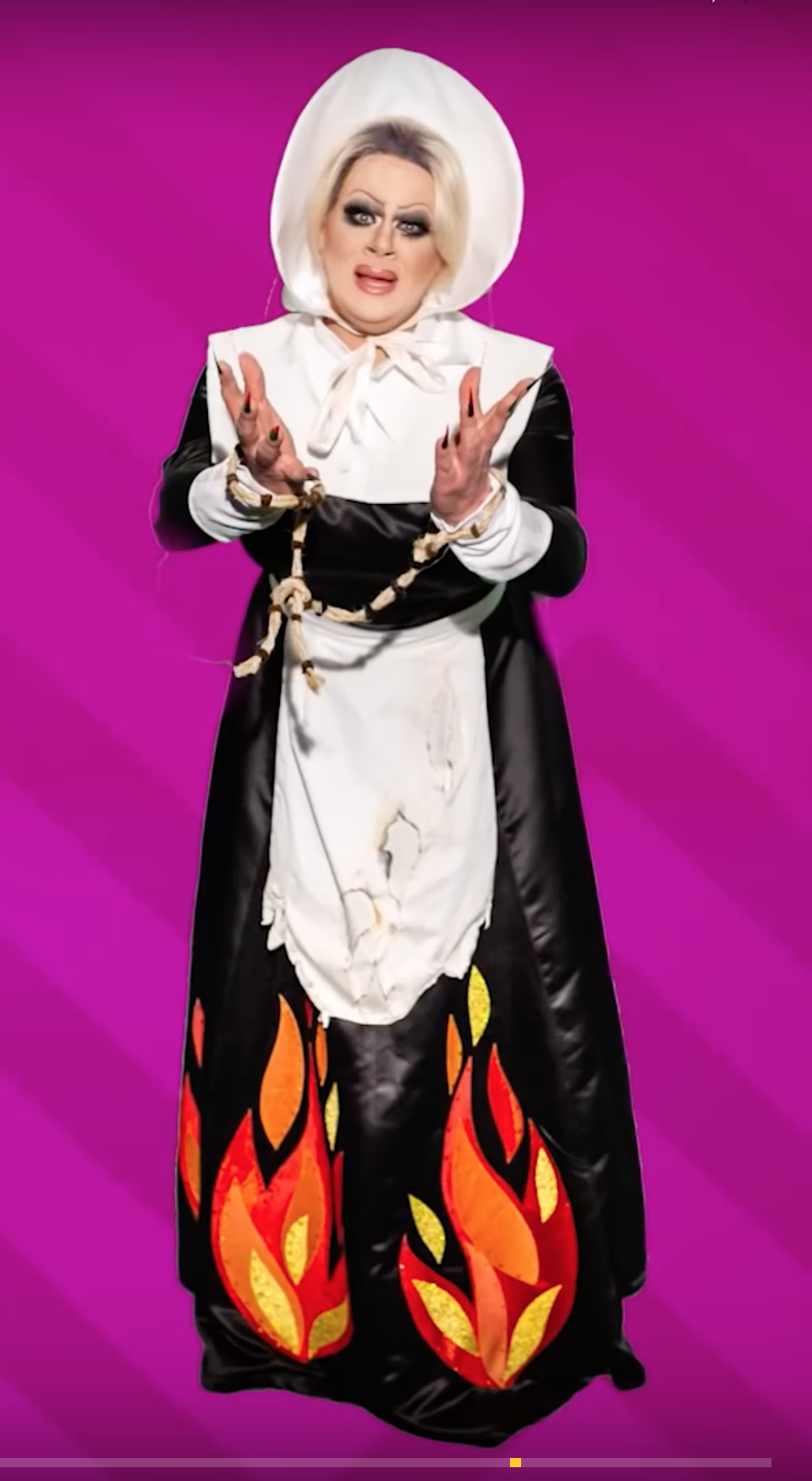 Brilliant, what a clever take on a ‘witch’ idea by being and old witch burning at the stake. Again, this costume is campy, funny and clever and I love it. 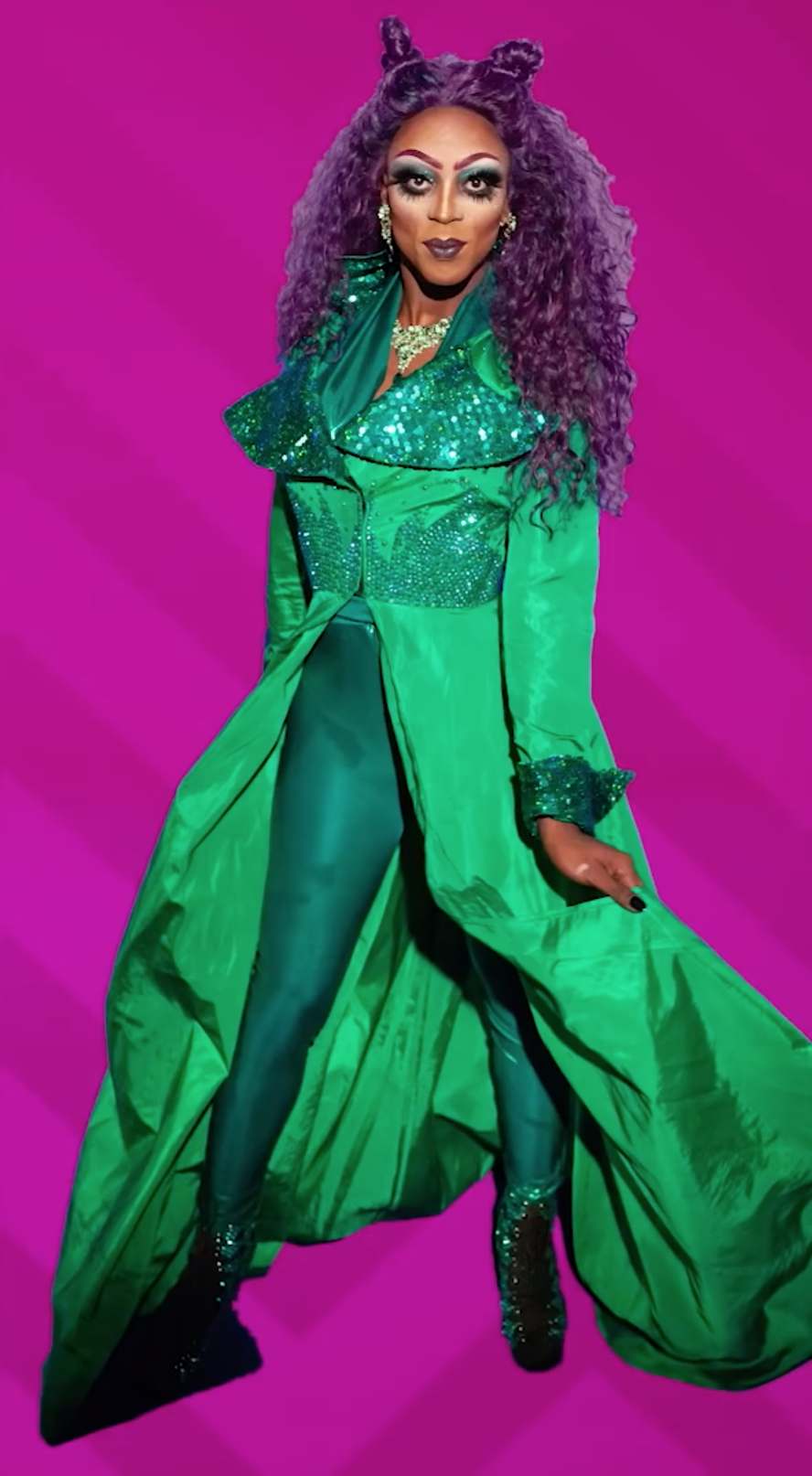 Meh. This is more Poison Ivy than a witch.

Shuga’s ‘Bloody Mary’ costume was great. It was dark, spooky, gruesome and fun.

This was a great look and I’m glad Cara Delevigne got the reference (considering it was inspired by her Suicide Squad outfit). The tattoo details on the bodysuit look great, the makeup was beautiful and the headpiece was fab. Also, I see Brooke has gone bare foot to give the voodoo witch a more real look – I like it. 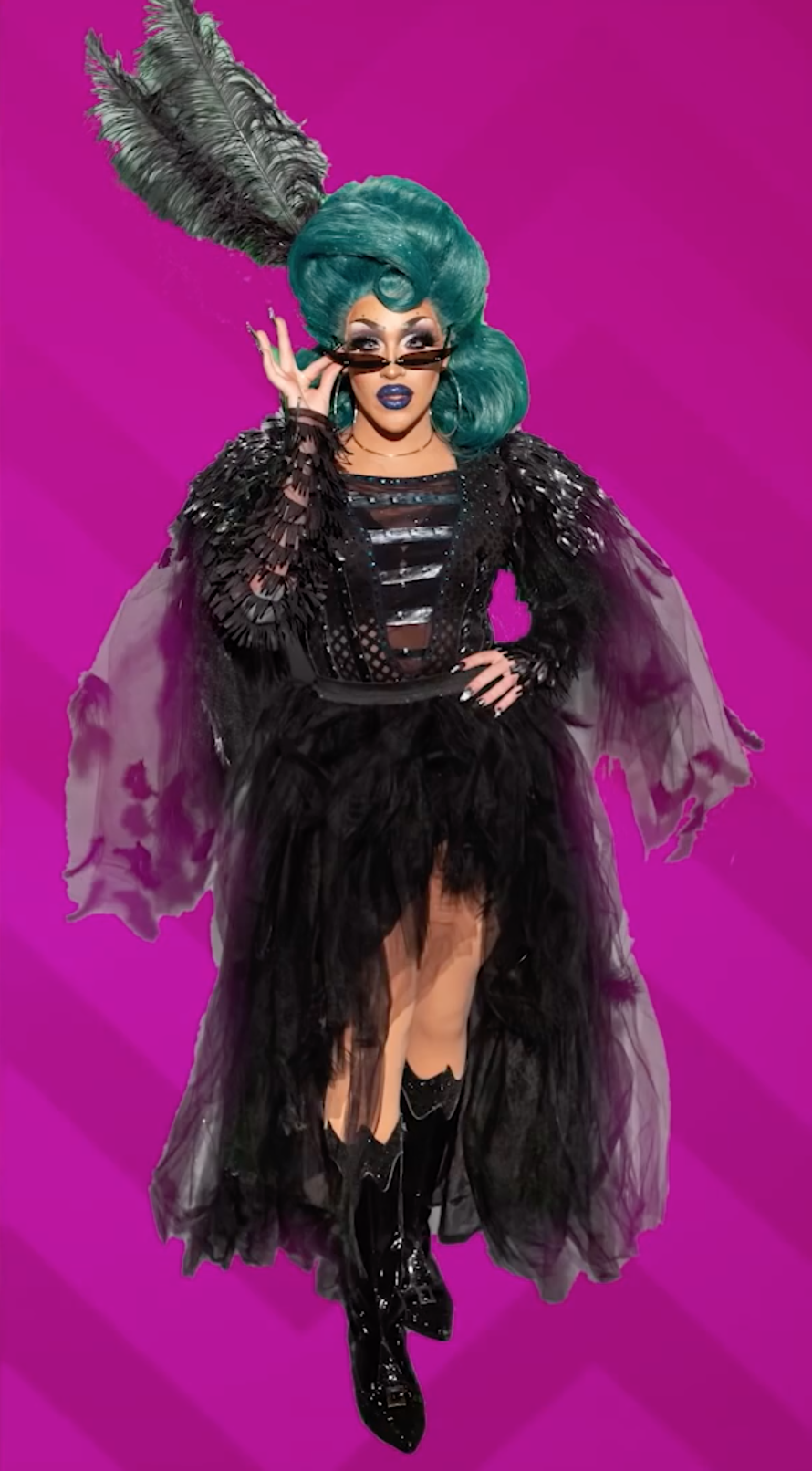 This isn’t the most exciting look but I love the glasses and the wig. This is such a remake of the 90’s Sabrina the Teenage Witch. This would be the unknown third aunt, banished for being a slut. Remember Casper Meets Wendy? It could also be something from Casper Meets Wendy. 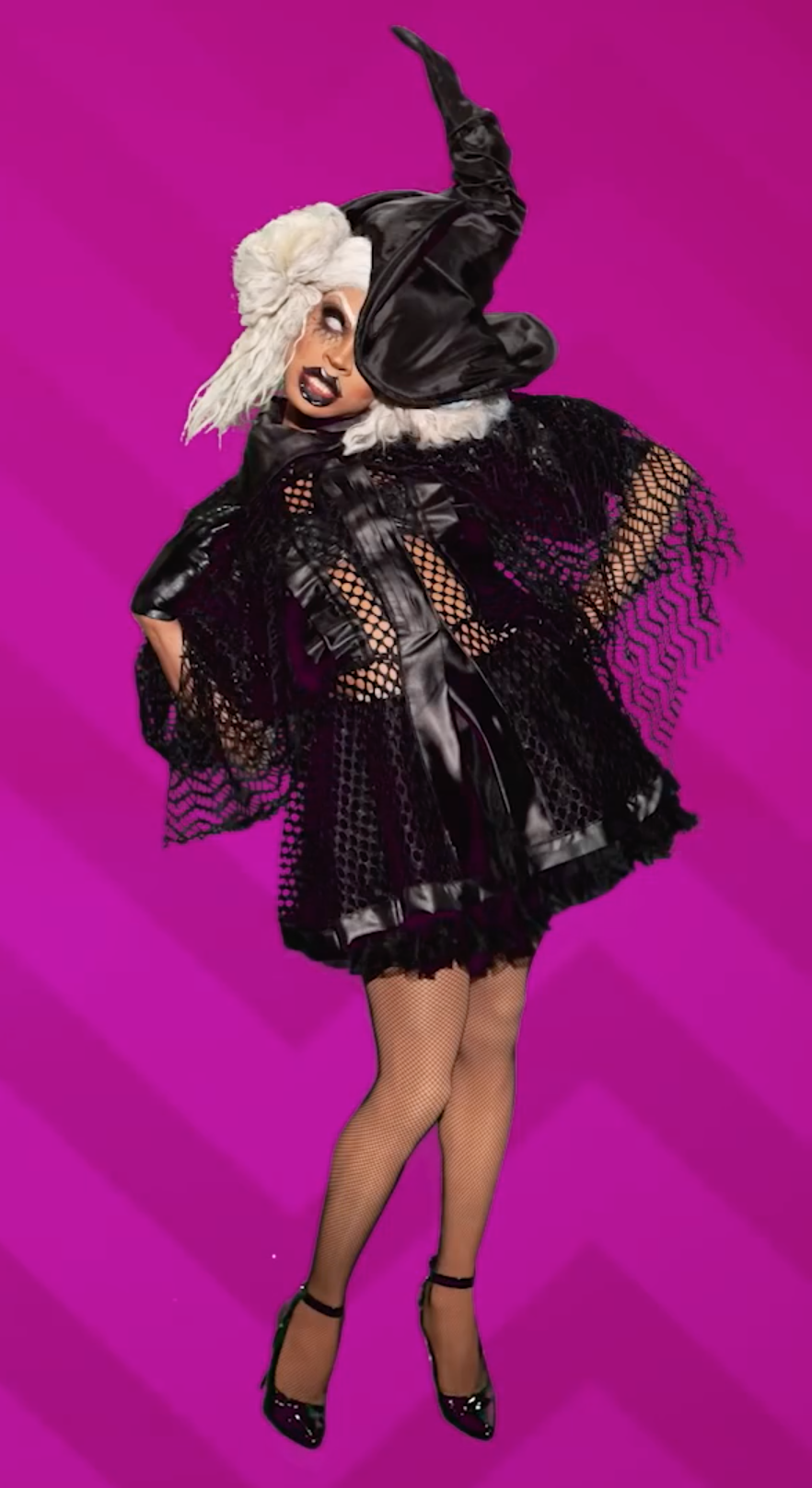 I absolutely adore this. The dreadlocked white wig, white eye and bent witches hat is so incredibly editorial. This is what I’d love to photograph as a portrait series. The dress is nice but not that exciting but I also think that it doesn’t matter because all the focus and details are in the face and head. This was my favourite witch look this week. 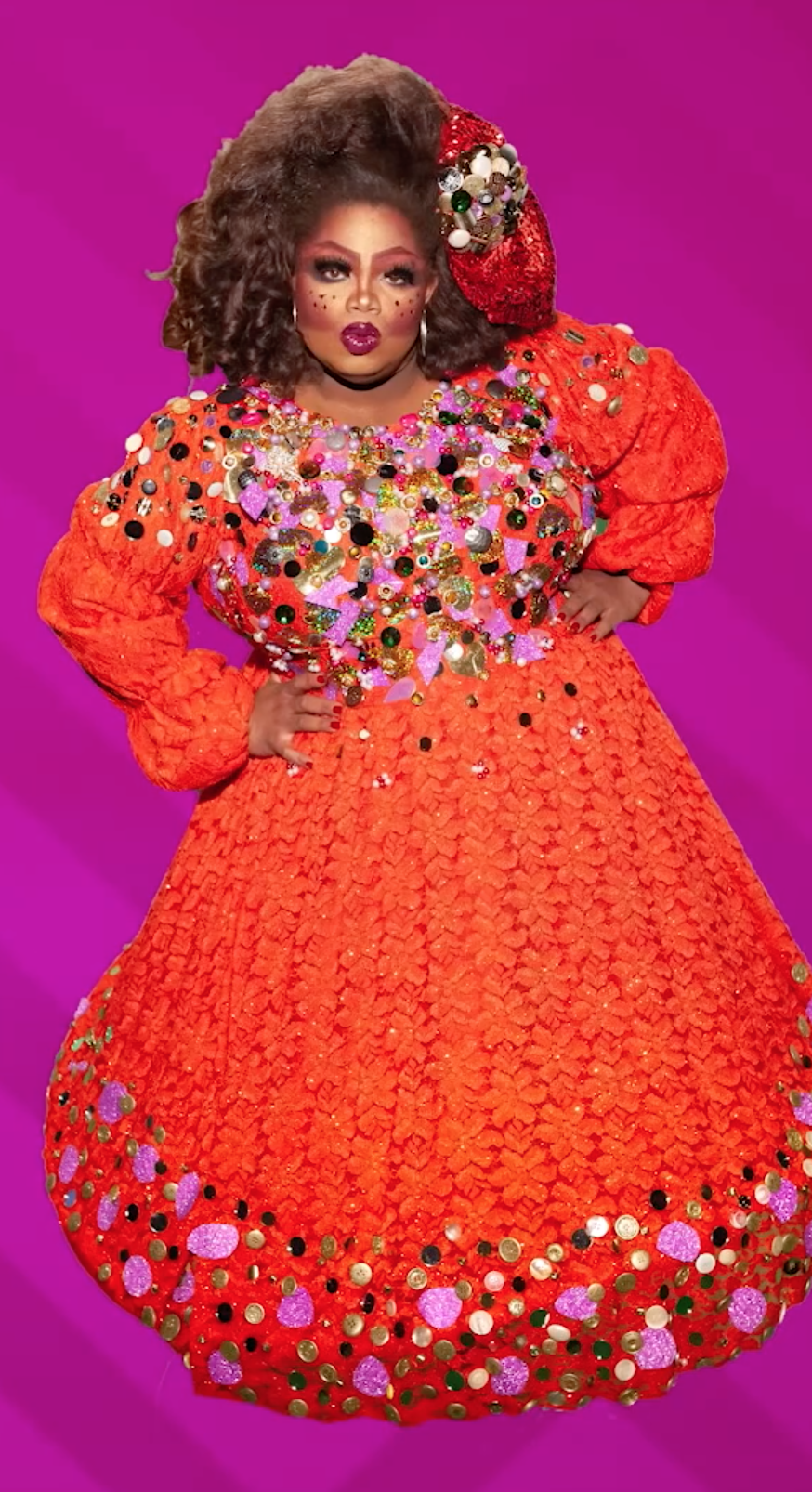 I liked the reference to The Wiz but this costume felt far too simple in my opinion. It was just a read dress with some sparkle, the whole dress should have been covered in gems and details. 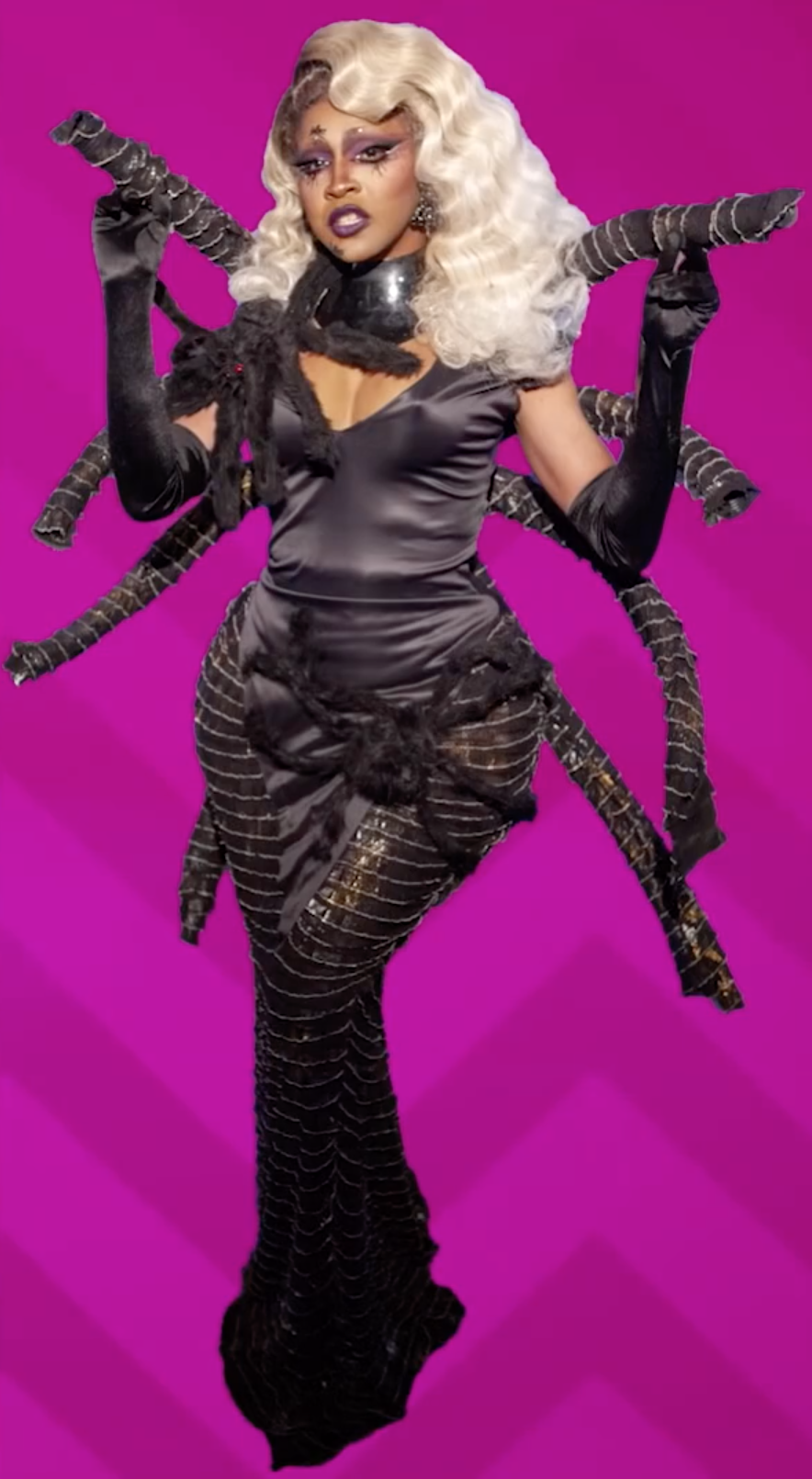 The wig looks great and the makeup was good, other than that I thought it looked very homemade. 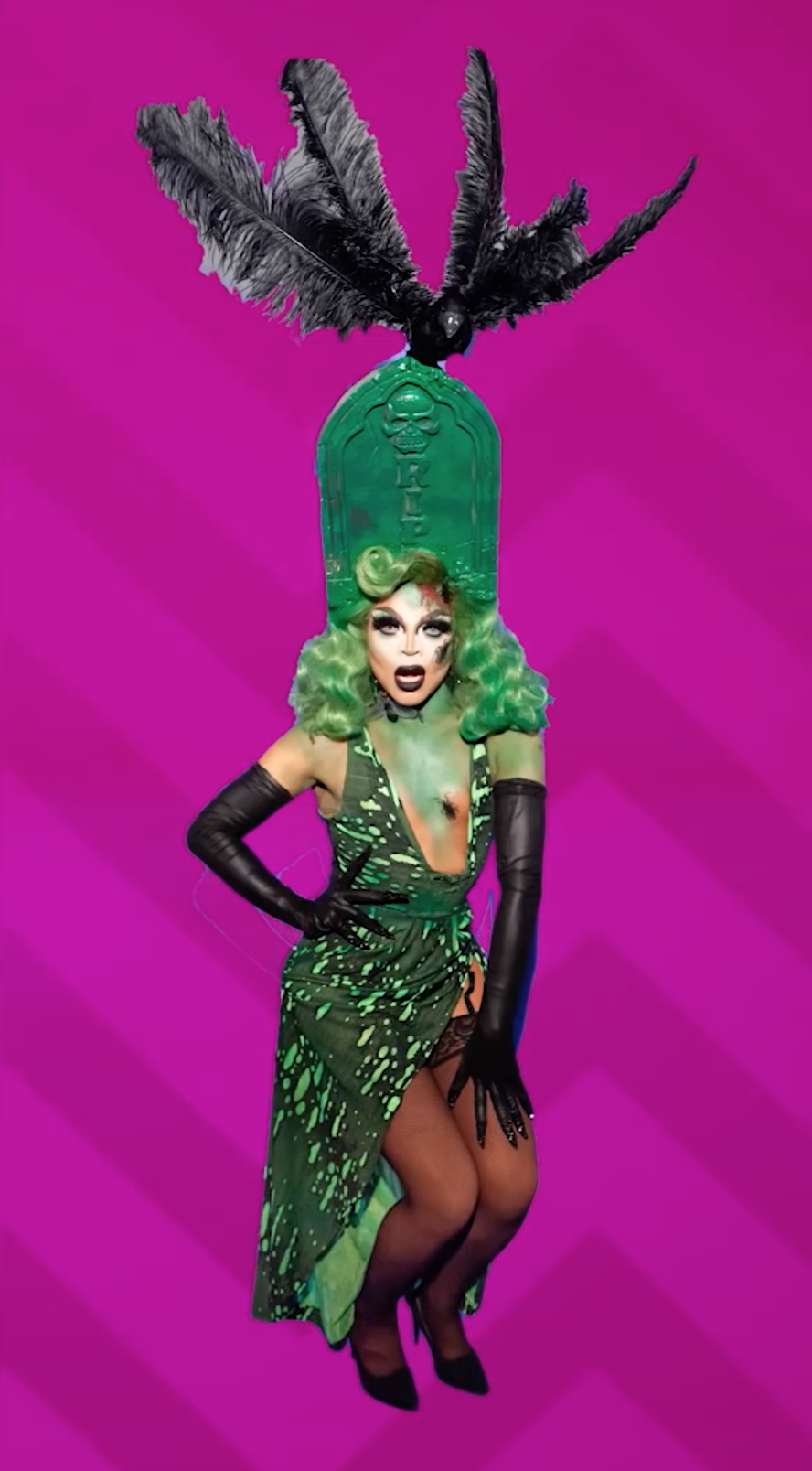 I mean, it’s some paint on her neck and stockings. I’ve seen this too many times from Vanjie now and it’s annoying that she keeps getting these free passes because she was a meme last year. The headpiece is okay and the wig is nice but Vanjie really needs to step it up.

This is great, it’s elegant, spooky and sassy. The white wig contrasts beautifully with the black dress. She looks like the Grim Reaper’s wife and I live for her deathly look. 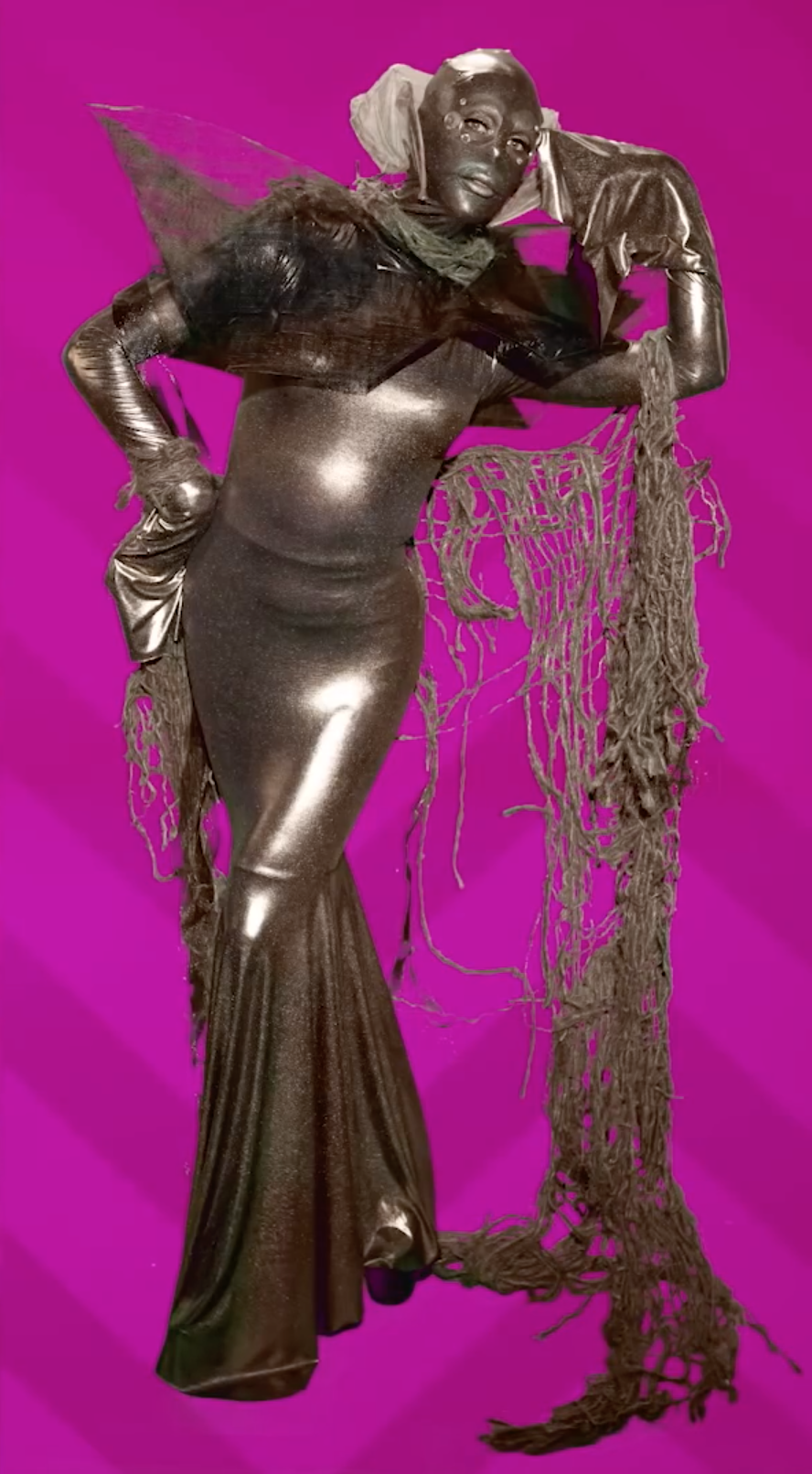 This is everything. It’s spooky, glam, unique and a nice change from her vintage aesthetic. 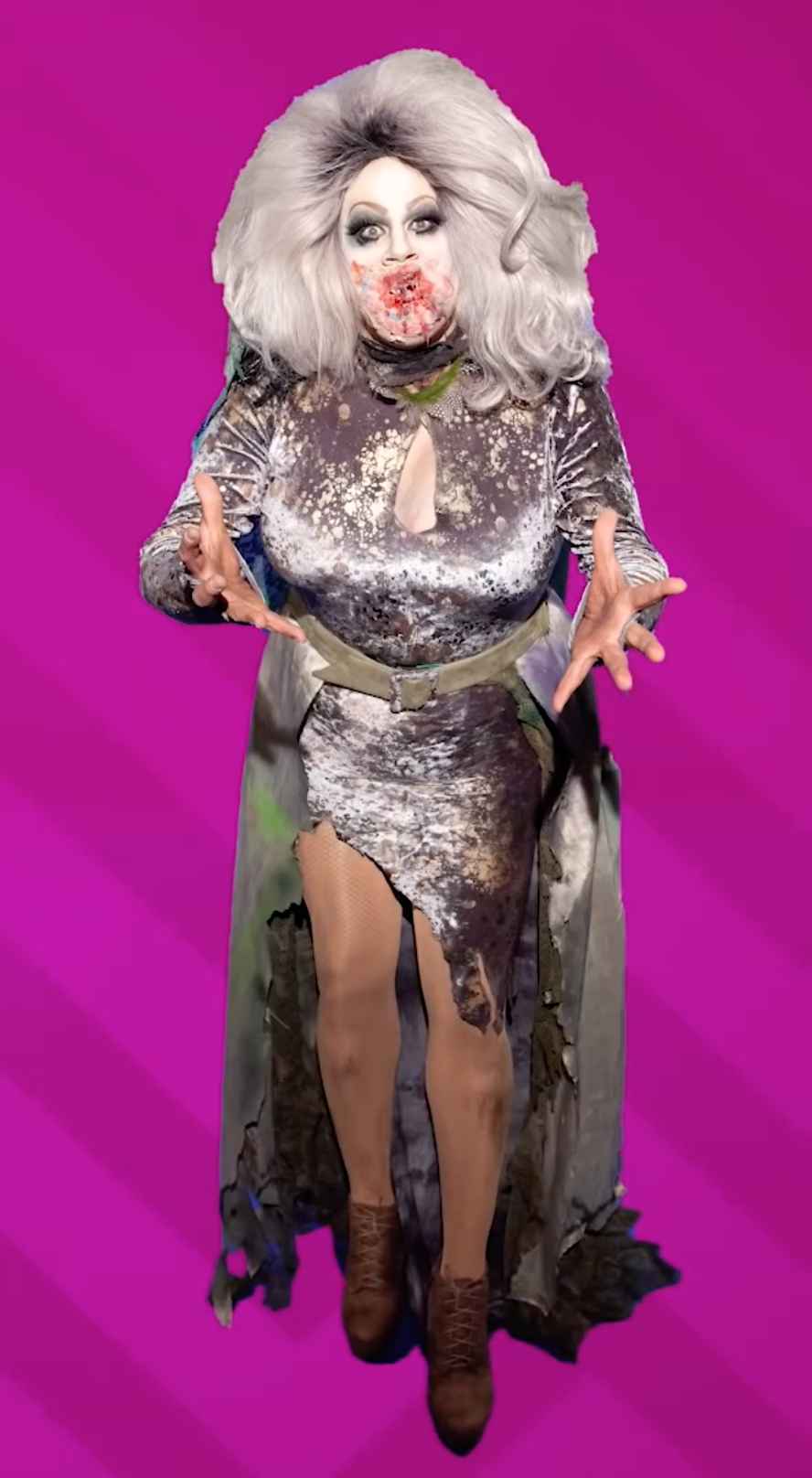 The rubber face reveal was everything. This was a really spooky treat to behold.

I actually really like this. The fur pants look like teeth which goes great with her ‘bone collector’ look. The wig looks nice her makeup is beautiful and she looks polished. 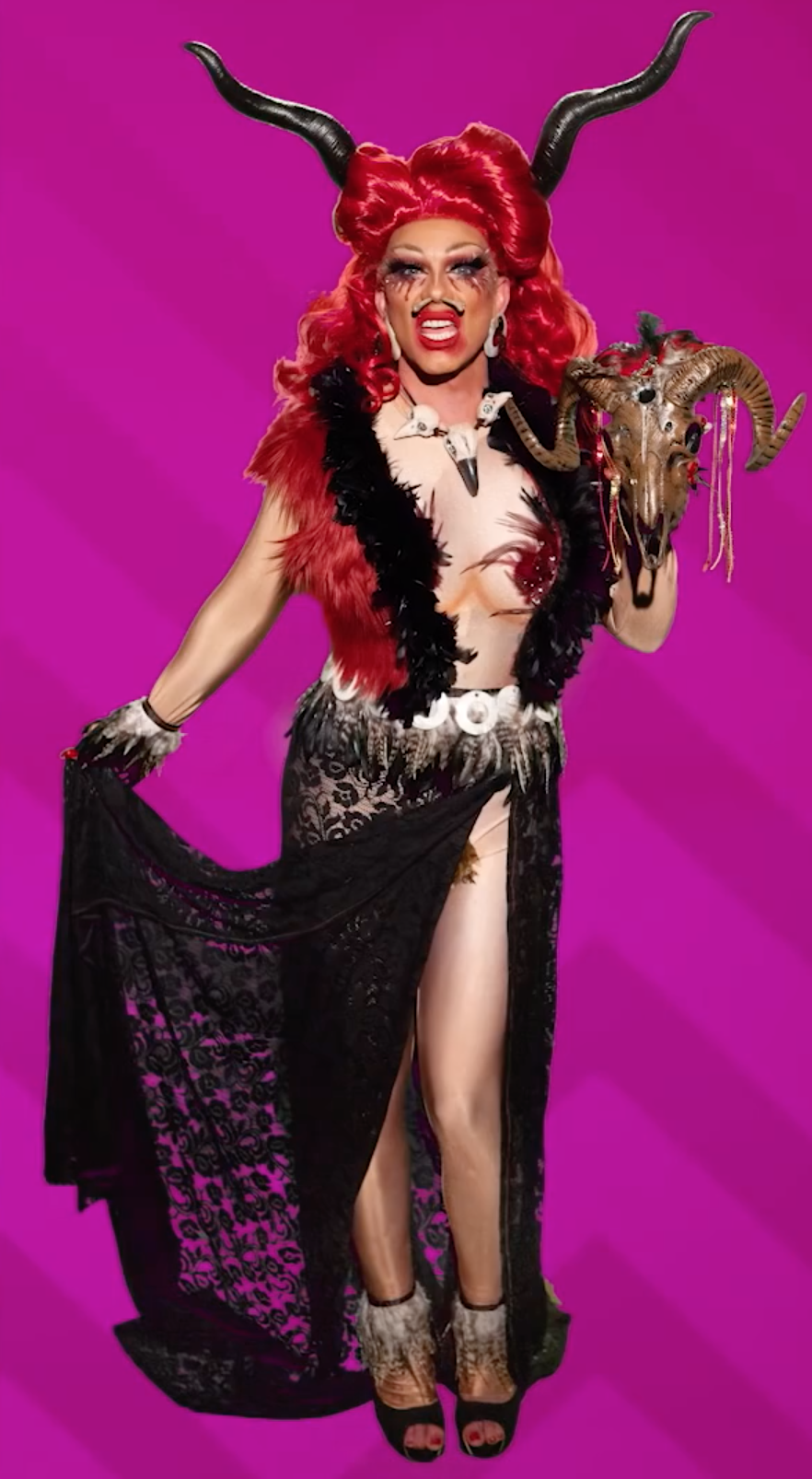 It looked very tribal but also really homemade. I’m a big fan of Shuga but this completely missed the mark for me. 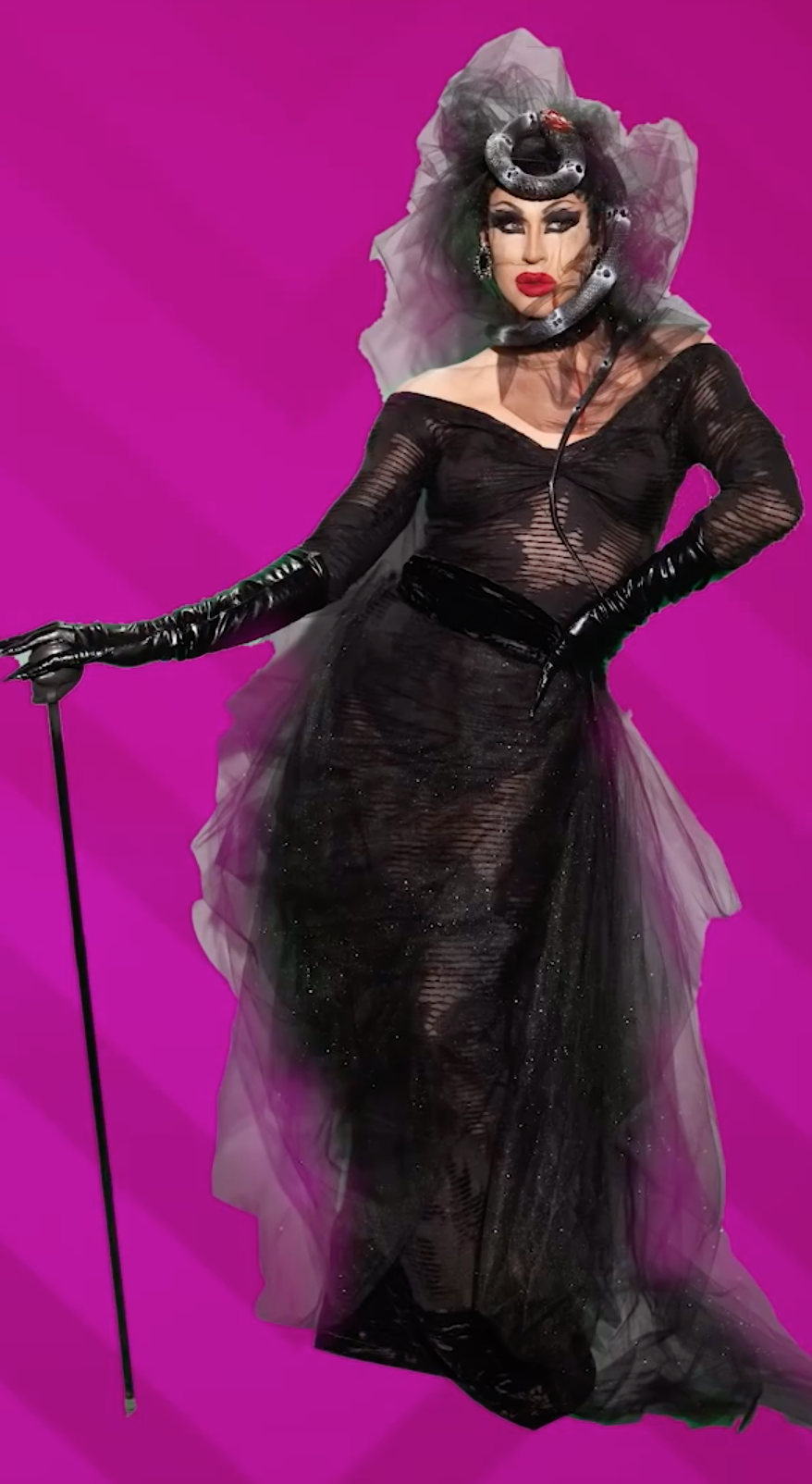 A really nice gothic look. It reminded me of Detox’ all black look when she yelled “I’ve had it!” at Serena Cha Cha. But then again, a lot of Brooke’s looks remind me of Detox.

It’s pretty, not spooky. It’s just a slightly disheveled mermaid so I’m not too excited by this. 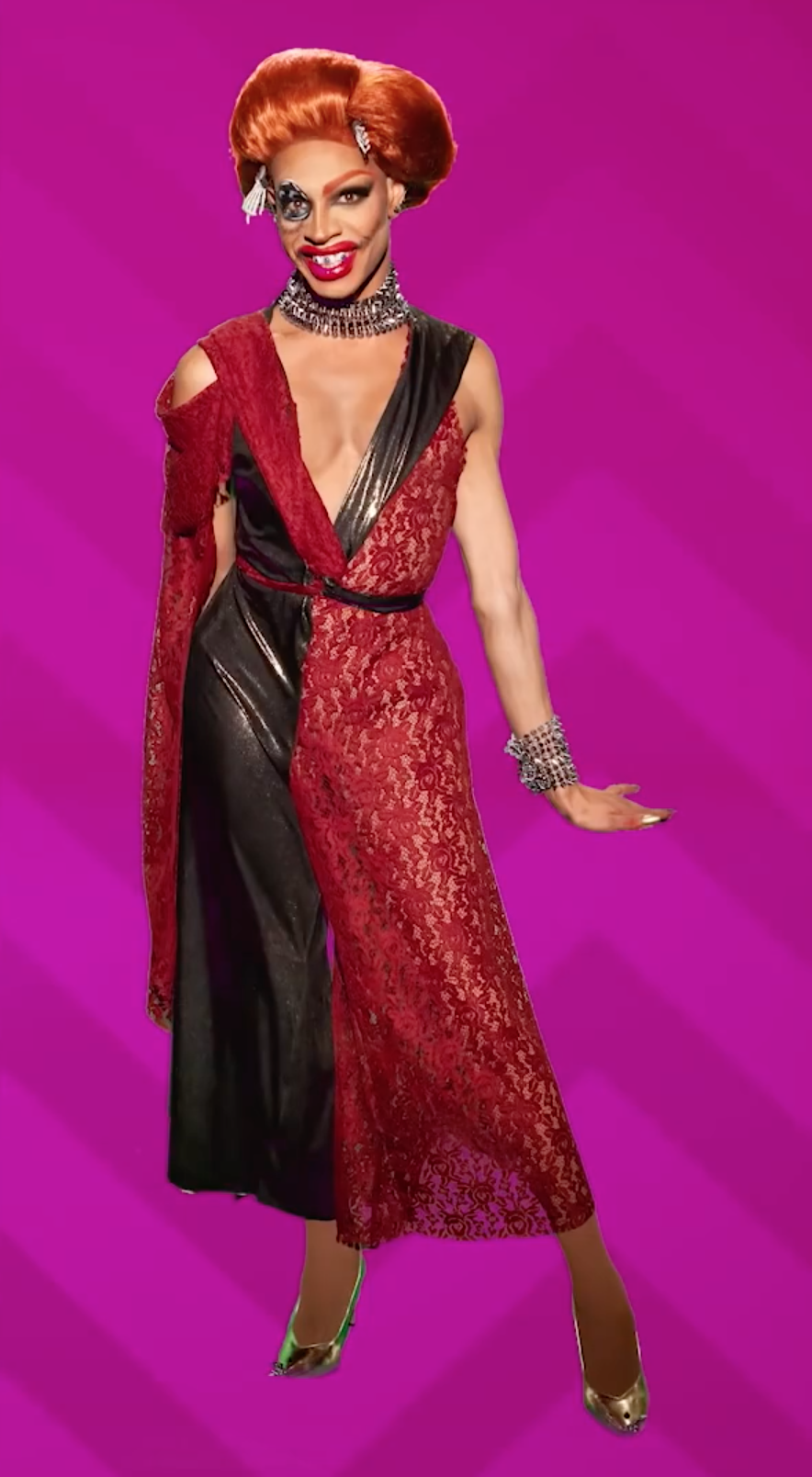 I mean… Her other looks were great and this was a huge fail.

I LOVE Elvira as a judge on the show and there was no better than her to be judging a Monster Ball. Also, Cara Delevigne was a pretty entertaining judge, she looks stunning, had great commentary and clearly enjoyed the experience. 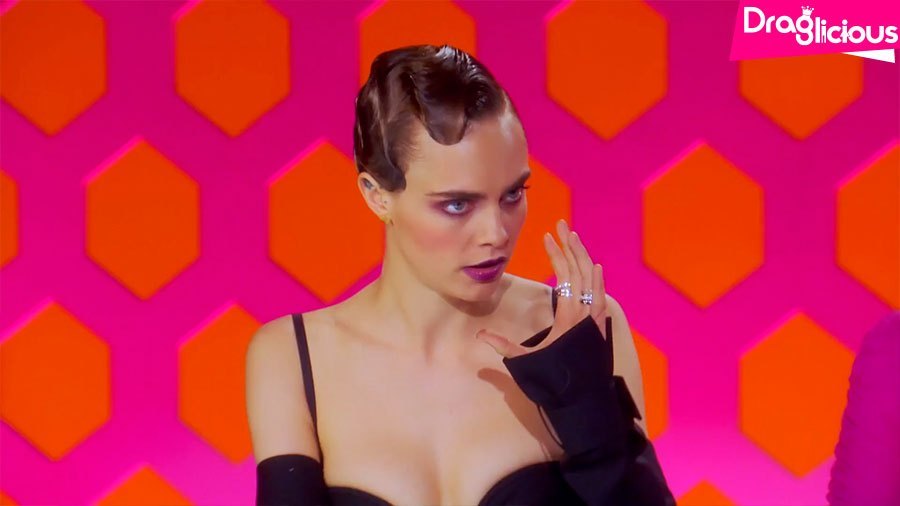 In the end, Shuga and Ariel were in the bottom, which wasn’t too surprising. At this point, I expected Shuga to be sent home as Ariel has a ‘bigger’ personality and brought a lot of drama to the show. However, that wasn’t the case. Ariel slipped on her skirt and went tumbling down and she never quite recovered the lipsync from that moment.

Shuga stayed which was a shock to a lot, especially when they sent her a message from her partner in Untucked – that’s usually a sign that you’re going home. But I’m glad she stayed, I really like Shuga.

This week, I gained 5 points which took my total to 38 points and Tom got 6 points which brings him to 24 points. Vanjie is now on 8 points. Somehow I’m managing to keep a strong lead, but for how long? Only time will tell. 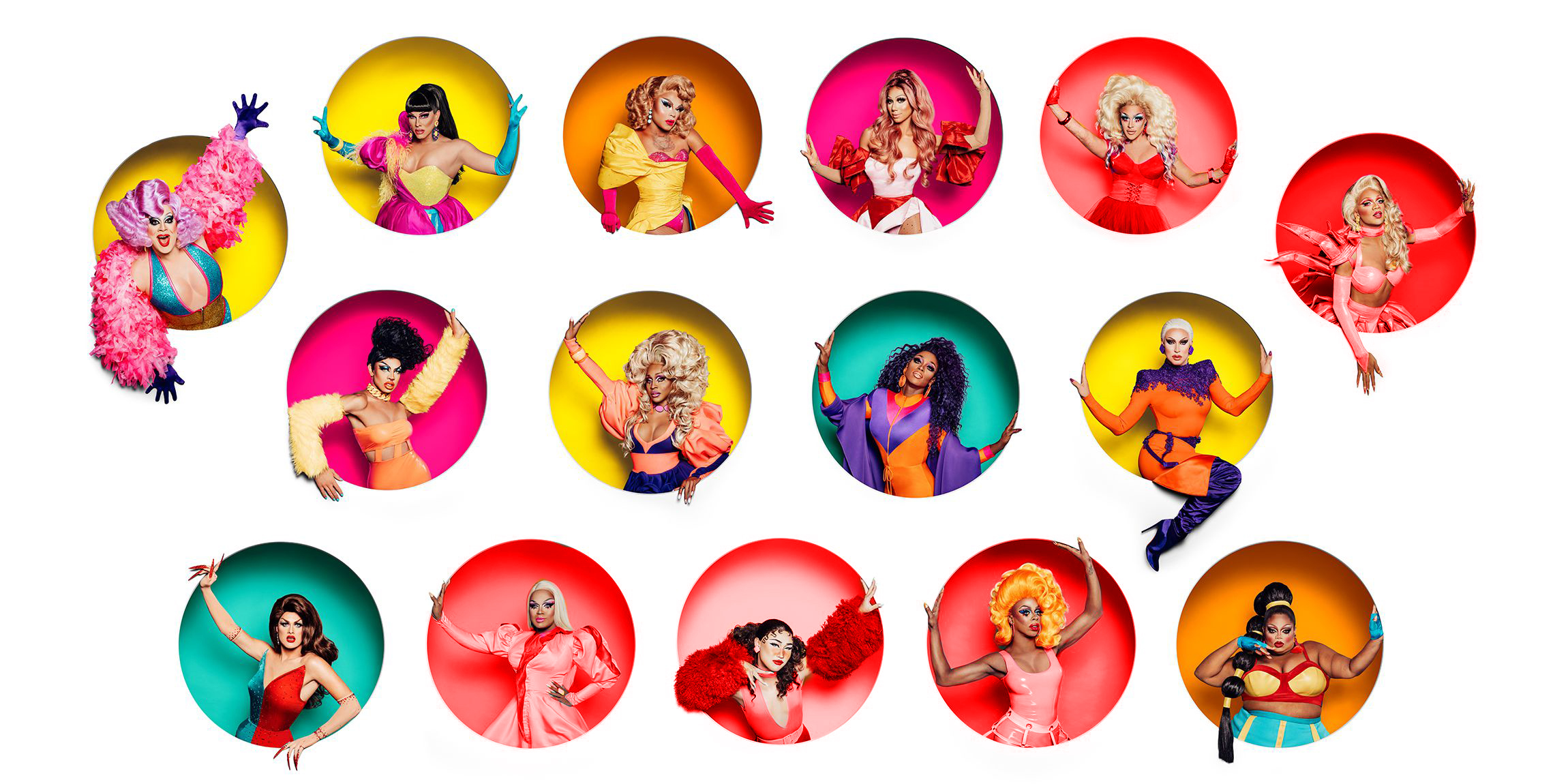 Not gonna lie, I was really proud of this sign I m