These queens didn’t come to play this season. In fact, it’s only taken us 4 episodes to see just how hot the competition is getting. And believe me, tough decisions are being made. But that’s just the name of the game.

The episode started with Trinity and Manila talking about sending home Gia and what not and both agreed that it was her time to go. However, we did also start to see a bit of Valentina’s shady side come forth once again.

Despite being saved by Manila and the fact that Valentina even said “thanks for saving me” and all that jazz, she then went to the confessionals and slagged Manila off about how she doesn’t feel that she needs to be grateful. Clearly, Valentina has seen that Manila is fierce competition.

But there was one thing that keeps bugging me. Sure, I’m aware she’s probably doing it for humour… but it’s not funny. That of course, is Valentina posing to herself and bragging about what brands her boy clothes are when she enters the workroom.

Then we moved swiftly on to the main challenge

RuPaul entered the work room to give the contestants their latest mission. And I have to say, it was really nice of Milan to lend RuPaul her Season 4 entrance lady-pimp suit.

Anyway, RuPaul was here for one thing only and seeing as the cameras were rolling, it was time for him to speak to the queens. This week’s challenge would be an improvised comedy challenge.

Yes, the queens would be split into pairs (and a team of 3) to act as the claimant and the defendant in a Jersey Shore-inspired spin-off of Judge Judy. But instead of Judge Judith Sheindlin banging the hammer, it was New Jersey’s own Michelle Visage who would do the honours.

The queens were told to pair (and trio) themselves up. Team 1 was Naomi Smalls and Manila Luzon, Team 2 was Latrice Royale, Monique Heart and Monét X Change and Team 3 were Trinity The Tuck and Valentina. But did the queens make the right decisions?

From first glance, I thought it was interesting how the teams paired up. Trinity and Valentina were on the same season and they were friends so they understand each other’s personalities and style. However, that’s a risky move for Trinity based off of Valentina’s Snatch Game performance and how bad Valentina and Nina Bonina Brown did in a paired comedy acting task on their season.

We also saw Monique and Monét pair up and they both were friends on their own season. However, they also bagged themselves a Drag Race favourite by getting Latrice Royale on her team. Sure, her Snatch Game was shit, but she was hilarious as Large Marge, the Tuckahoe prison guard way back when on Season 4. And let’s be honest, after seeing her Snatch Game, it would be great to see Latrice redeem herself in an acting/comedy challenge.

Manila and Naomi were the other pair and it was kinda nice to see these two come together. A legendary queen pairing up with a modern favourite. Both fashionable, both stunning, one of them guaranteed to be funny. A gamble? Sure. But with Manila’s guidance, I’m sure Naomi can get to her level and it’s nice because Naomi has already admitted to idolising Manila so it’s a dream come true for the two to work together.

We all saw the episode, so I’m going to rush through the challenge because I don’t particularly like these ones. The Bossy Rossy episode was boring on Season 10 and this one was basically the same format.

Naomi and Manila worked together great. They brought a great narrative to their story, they acted it well. The looks were on point and Manila killed it.

And surprisingly, Naomi managed to keep up with Manila, she didn’t steal the show, but she did well. Was it a groundbreaking performance, no, but Naomi really threw herself into the role.

For some reason, everybody thought Monique was slaying this challenge and I honestly didn’t see it. She had the same screechy voice that she’s had in every challenge she’s ever done. When the judges said her characterisation was great, I was like “whaaaa?!” it was the same as her Tiffany Haddish last week! However, I do have to say that Monique looked great by comparison because Latrice was so shit this week.

In fact, she was shit at Snatch Game as well. I think at this point, we have to just accept that Latrice has not done well on All Stars (apart from her Variety Show performance). It’s weird, I think her ‘legend’ status has got to her a little bit because she used to throw herself into acting challenges and now it’s like she has no time for anybody who speaks or does well. I genuinely think that Latrice thought she could skirt by on her reputation.

Not only that, but Monét was also quite bad. Don’t get me wrong, she was nowhere near as bad as Latrice was, but she was far from great.

I’ve got to say, Trinity didn’t nail this episode quite like I thought she would. Don’t get me wrong, she was still funny, she still performed well and the look was brilliant, but she didn’t quite have that ‘zing’ that I know she’s got.

However, Valentina really surprised me. Like, holy hell! She was really good. The look was spot on, the personality was hilarious and her improv was brilliant. Every time she said “Well, whadda ya know, badda-bing badda-boom” I nearly pissed myself. Bravo, this was a thoroughly enjoyable performance.

Main Challenge Opinions – From first glance, I would say that Manila and Valentina would be the winners based off of the challenge. Both had a great look, a developed character and a hilarious performance.

A special mention also has to go out to the legend that is Stacey Layne Matthews for making her second All Stars 4 cameo this season. I’m sure this is because they don’t think she’s good enough for All Stars but the producers know she’s a fan favourite and internet meme so Henny is getting a lot of bonus features throughout the season. 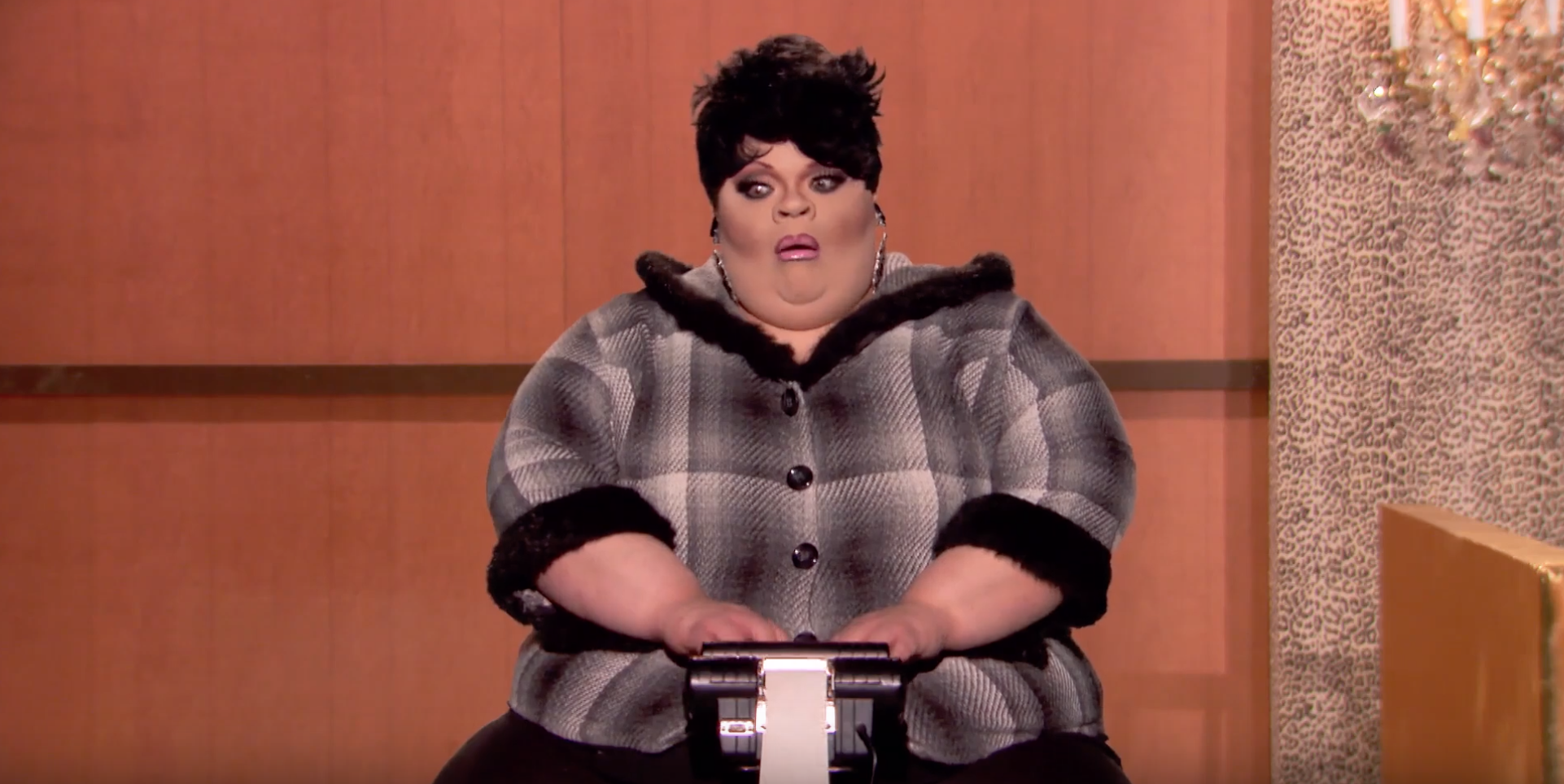 Back in the workroom, we heard queens talking about how they felt the challenge went. Unsurprisingly, one person was incredibly confident about her performance. However, that queen was Latrice Royale who was literally the shittest in this episode.

But what baffled me more was how egotistical Latrice seemed to be. Latrice was never like that, that’s what made her a star in our eyes way back when. She was commenting on other people’s fuckups like she was perfect but luckily, Trinity was there to bring her back down to earth. 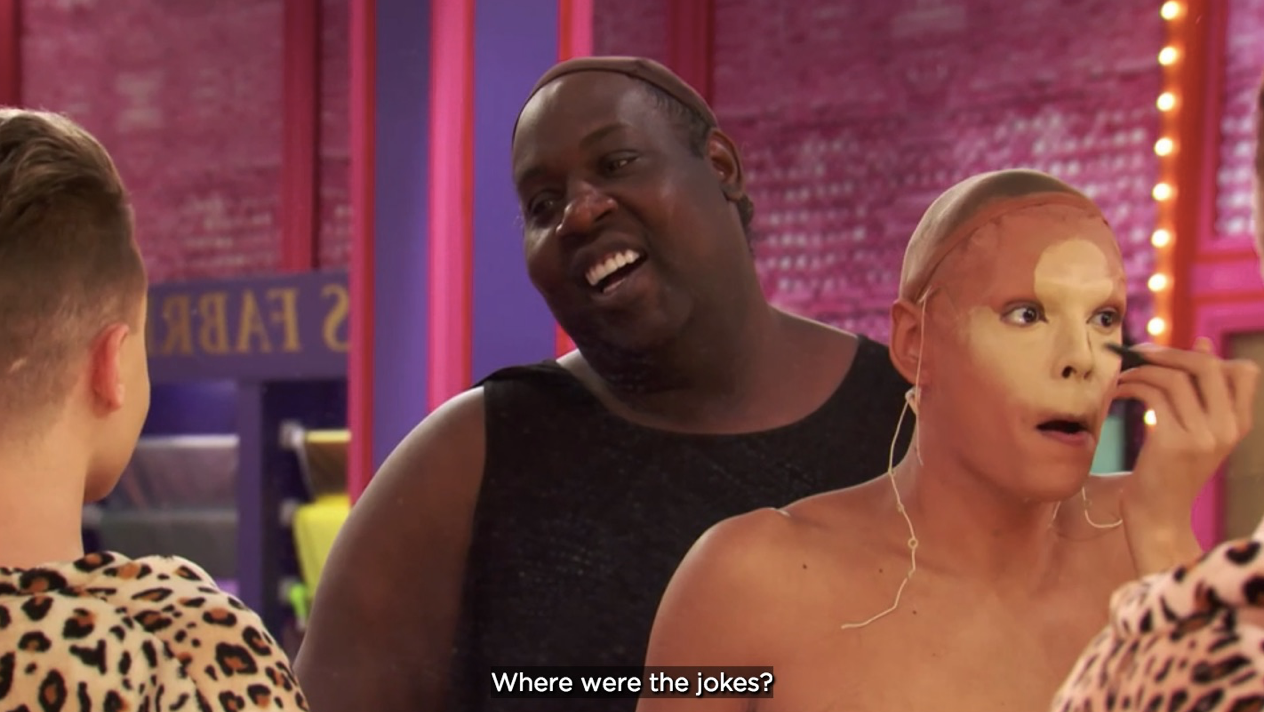 Then Valentina said something that most of us had thought about, that nobody would send her home because she’s Latrice Royale. Most of us have thought about it. Let’s be honest, would you want to be the person who sends home one of the most beloved queens in Drag Race history (The most loved and respected if you ask Latrice herself)?

“The bottom line is: Every bitch in this competition was trying to get to my status and get to my level. It’s not being gloat-y; it’s about being loved, adored, and working.” – Latrice Royale 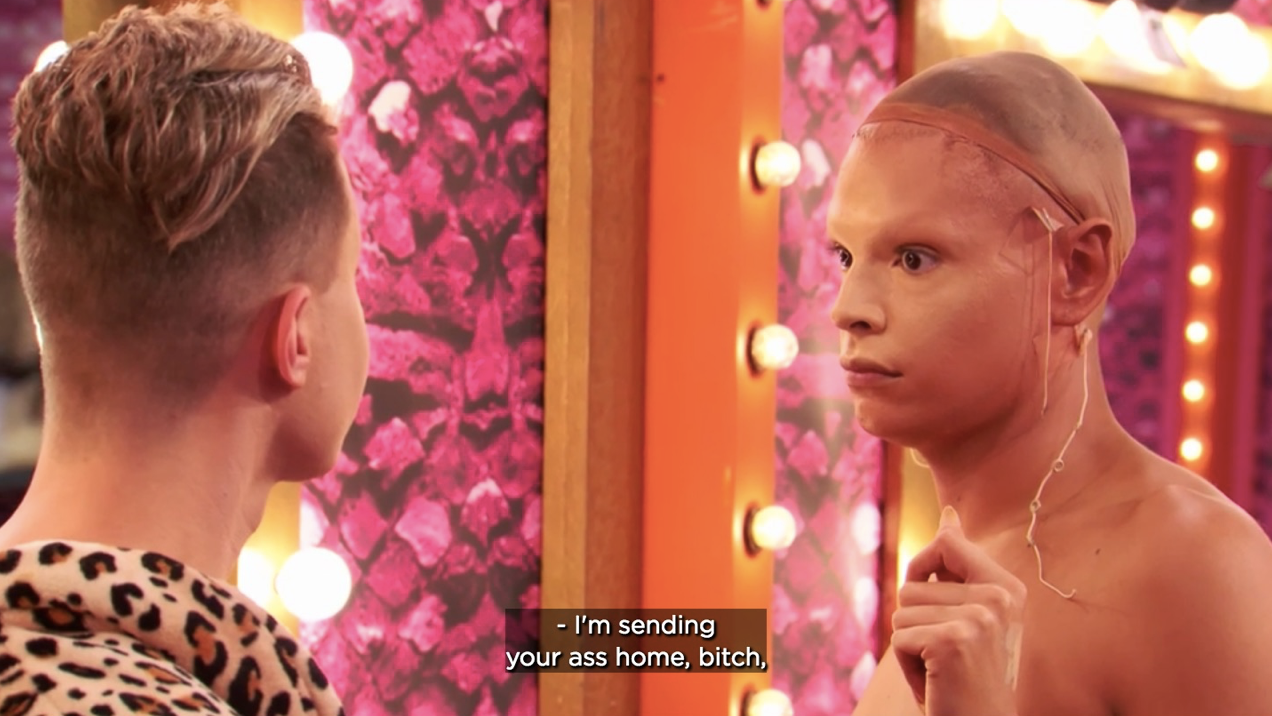 Anyway, Trinity was not happy with Valentina’s answer and her snakiness that peopled believed she had hidden within her started to pour forth once more, or at least in Trinity’s eyes it did.

This weeks theme was pretty fun and totally open to interpretation. However, I was gutted when Manila revealed that she was going to wear a red gown inspired by a bloodied sanitary towel. 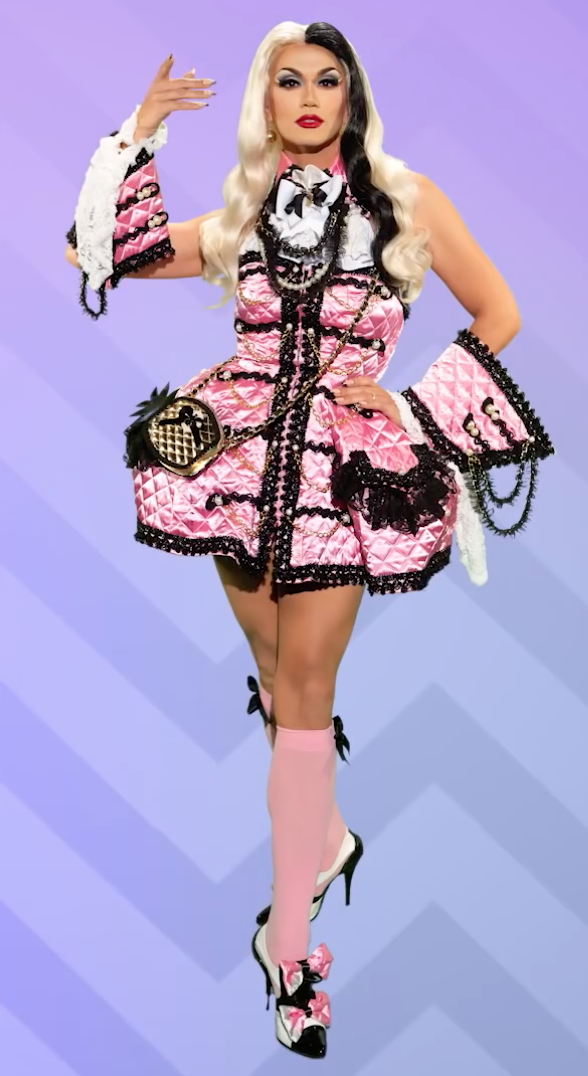 Despite her original outfit getting rejected by RuPaul and the political correctness police, what she actually presented was pretty darn good. I liked the fact that she wore a quilted Chanel inspired dress which I thought was a really great take on the runway theme. I also loved the pineapple clutch bag – a nice nod to one of her most iconic outfits. 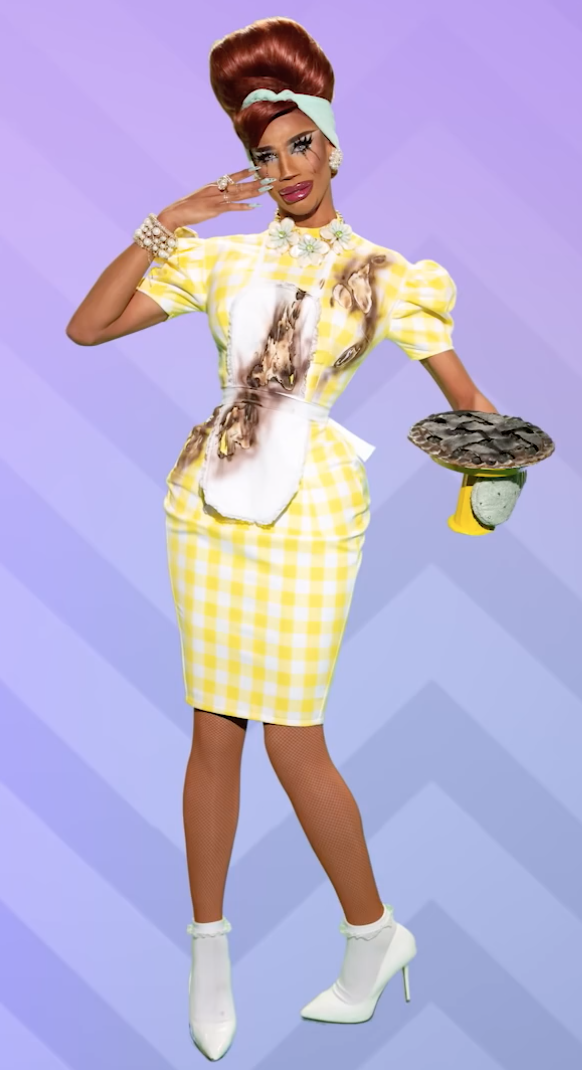 I know it doesn’t look particularly ‘curvy’ but for Naomi Smalls, it is. The proportions were right, I liked that there was a story to her costume. There’s nothing much more to say, she looks great. 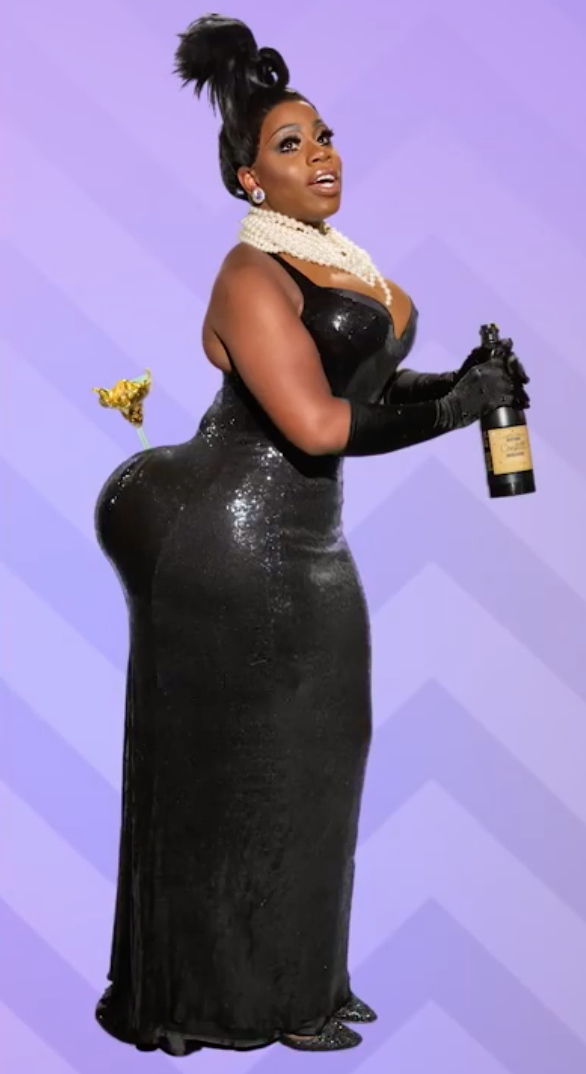 The concept, hilarious, the execution, not awful, but it really does look like a Halloween costume and that’s not what I want to see. The wig also looked a bit messy for my liking and the champagne glass looked sloppily attached to the dress at the back.

Yeah, she looked alright, but it’s so unbelievably boring. Like, yes, you cinched your waist but that can’t be all you do. It’s just a standard rhinestoned pageant gown and to be honest, the rhinestones don’t even look that good. Compared to everybody else, this outfit had zero imagination. 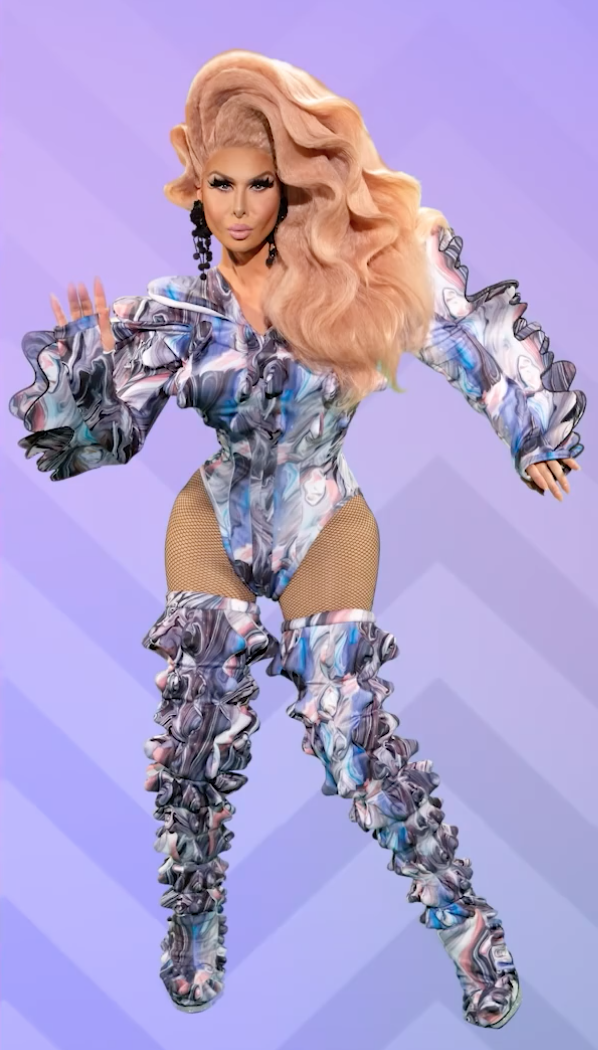 👏🏻 This 👏🏻 is 👏🏻 how 👏🏻 you 👏🏻 do 👏🏻 a 👏🏻 runway 👏🏻 theme 👏🏻 properly. Bravo Trinity. The wig is so fucking great, the outfit awesome and the fabric is both trippy and beautiful. I think this could actually be my favourite outfit of the week. 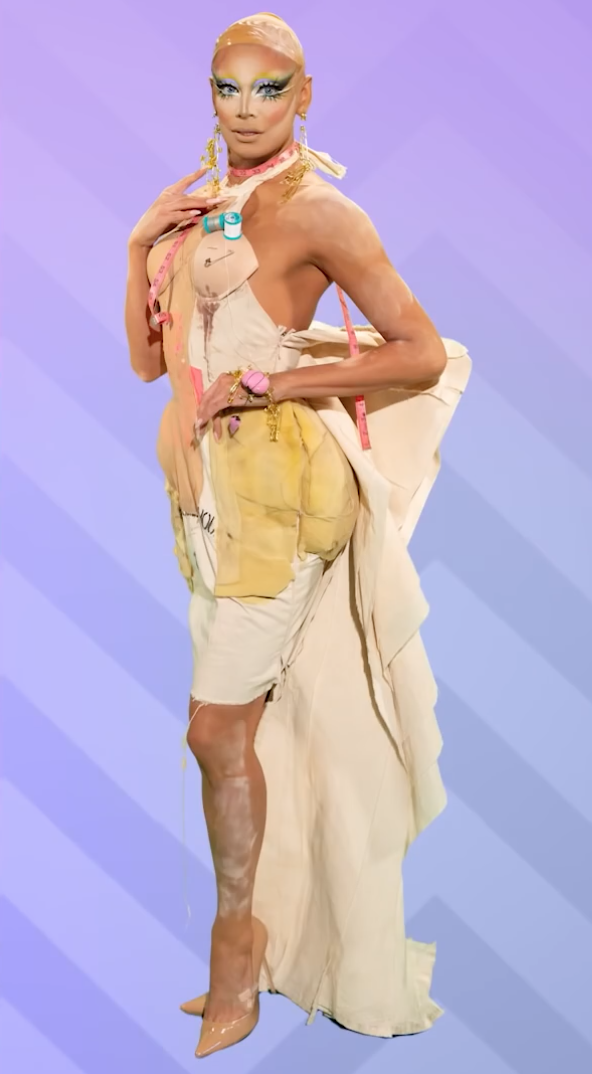 When I first saw it, I thought it was a cool concept. Now I’ve looked again… I don’t really like it. It was just too messy. I get where she was going with it, but why was their powder on her leg and arm? Why were there no fabric samples to add colour to the gown? Why were the hip pads placed so poorly? Why were the shoes so ugly and plain? Also, her outburst at the judge for not liking it? that was possibly the most cringe moment on the show so far. You could see nobody had time for her and Valentina looked incredibly awkward once she saw people’s reactions. 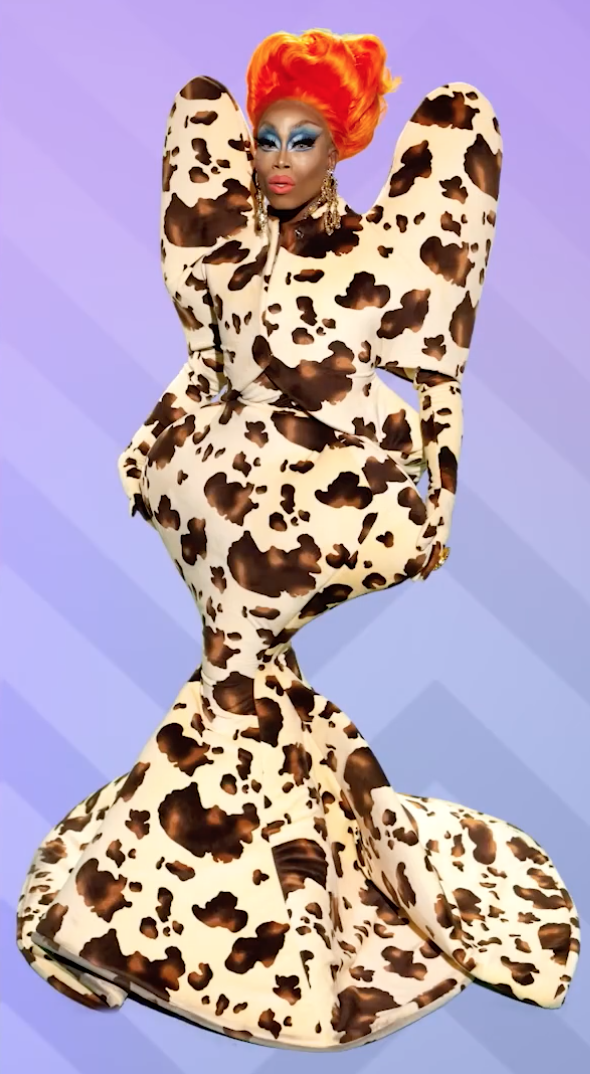 Monique understood the theme perfectly. The hips were so bizarre but so beautifully proportioned at the same time. The shoulders were oversized and fun and the bottom of the dress flaired out beautifully to create the most unusual silhouette on her body. But let me say this now, I am bored shitless of seeing this ‘Brown Cow Stunning’ stuff. She wears it in the confessionals, she wears it in the workroom and she’s worn it twice on the runway (in this season). We get it, you once said something funny because you didn’t know the difference between cow and giraffe print. This dress would have been equally stunning in any other pattern or colour.

Good news for me, Manila made it to the top (deservedly) and I was surprised(ish) when Monique made the top. If Valentina’s runway wasn’t as much of a miss, I think she would’ve made the top. Of course, Monét and Latrice were in the bottom. 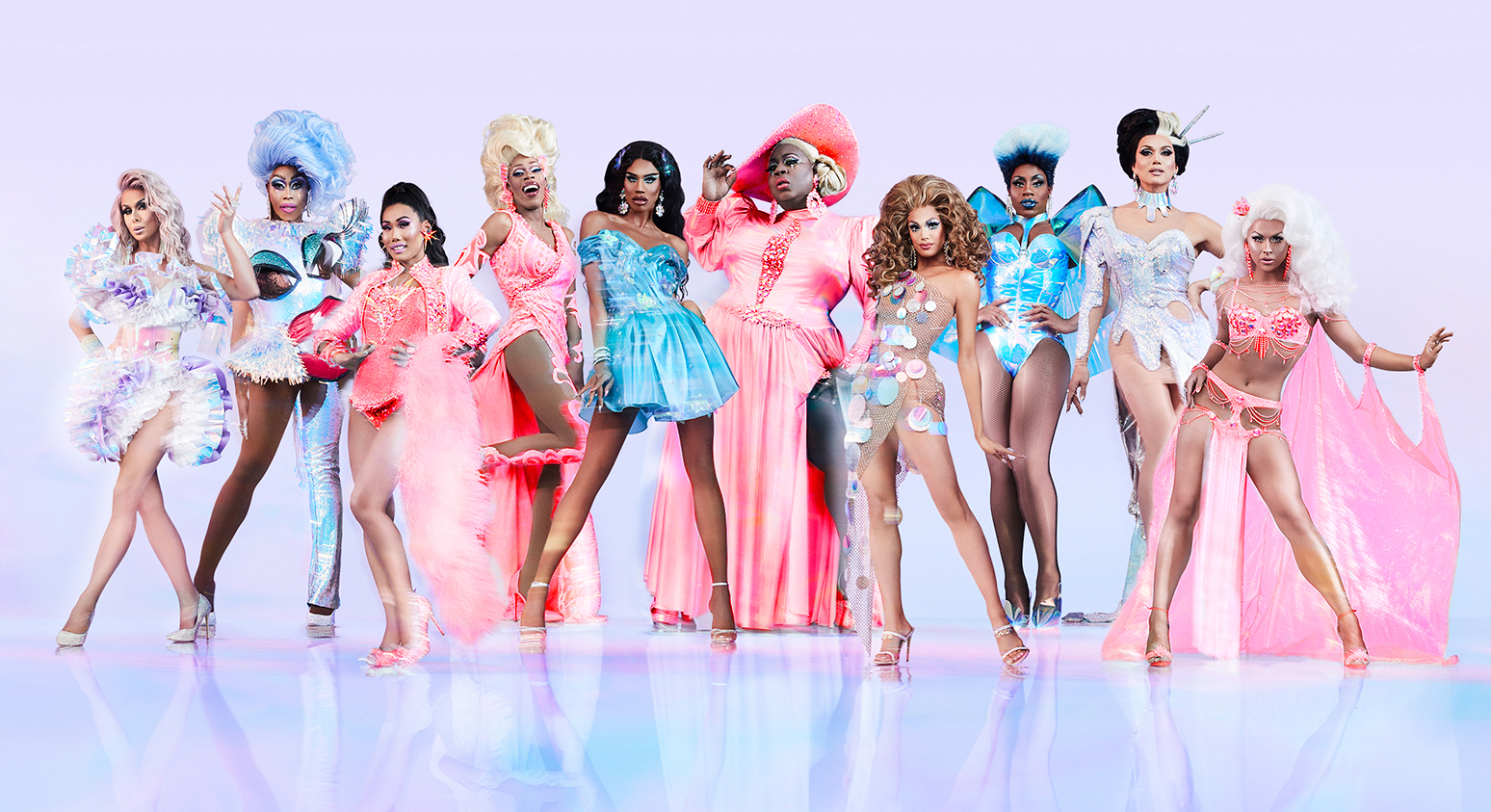 Based on the scores, I earnt 0 points this week and Tom earnt 8 points. Frustratingly, Tom is storming ahead in the competition and he now has 27 points while I’m left behind with a disappointing 11 points.

Who would have thought that I’d be doing so poorly when I got to pick the first queen. With just Monét and Manila left in the competition, I’ve got to hope and pray that they start winning some challenges (every single week).