Kahanna Montrese, we hardly knew ye. But that’s the show, it’s a new day and another queen has been eliminated. Was Kahanna gone too soon? Perhaps, but I felt it was deserving for her to go at that point. She joins many other famous ‘2 times in the bottom at the start of the competition and eliminated on the 2nd’ queens; Serena Cha Cha, Vivacious, Laila McQueen, Kimora Blac and Kalorie Karbdashian-Williams.

Anyway, enough about the past, let’s talk about the present. The queens headed back into the werkroom to discuss the lipsync shock of the last episode. Of course, all the queens were shocked by the 6-way lipsync and it certainly left Shuga Cain shook to the core as she was the last name called to stay in the competition. But shortly after that, the queens quickly moved on to talk about the blossoming romance between Vanjie and Brooke. Could this be the first on-show romance between two queens? 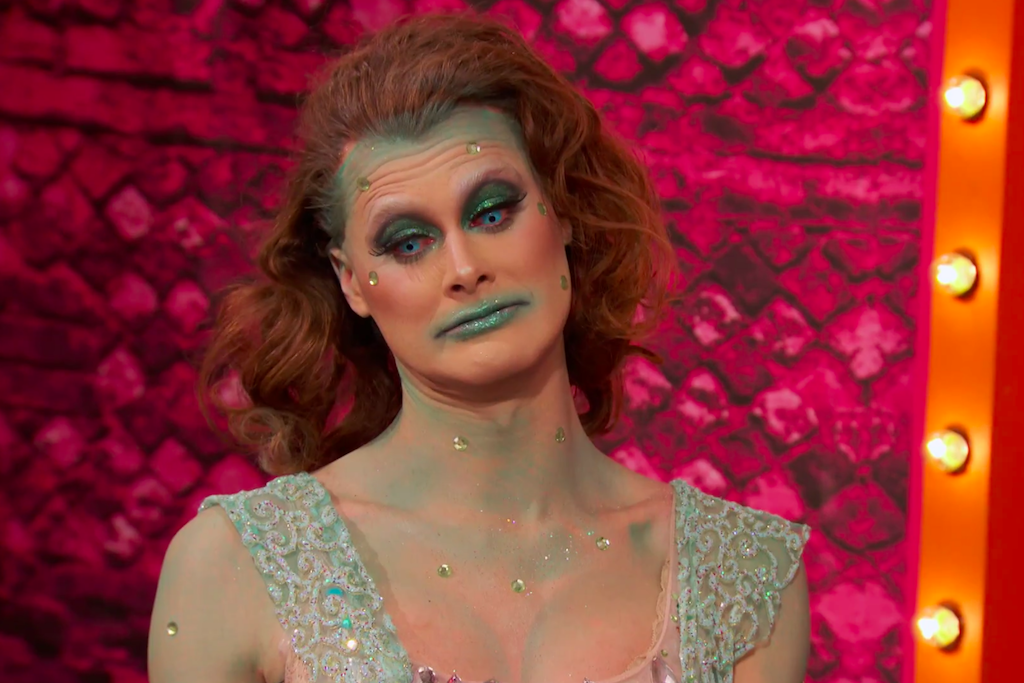 This week the queens had to get into quick drag and try and gain access to Michelle Visage’s exclusive party by sweet talking the door staff. Nina West absolutely killed this challenge for me by donning huge false teeth and pretending to be Michelle’s illegitimate daughter.

There were a few others that I thought did a good job of this challenge. Plastique made me laugh, A’Keria had me howling and she also made Ru cackle with her sassy attitude. 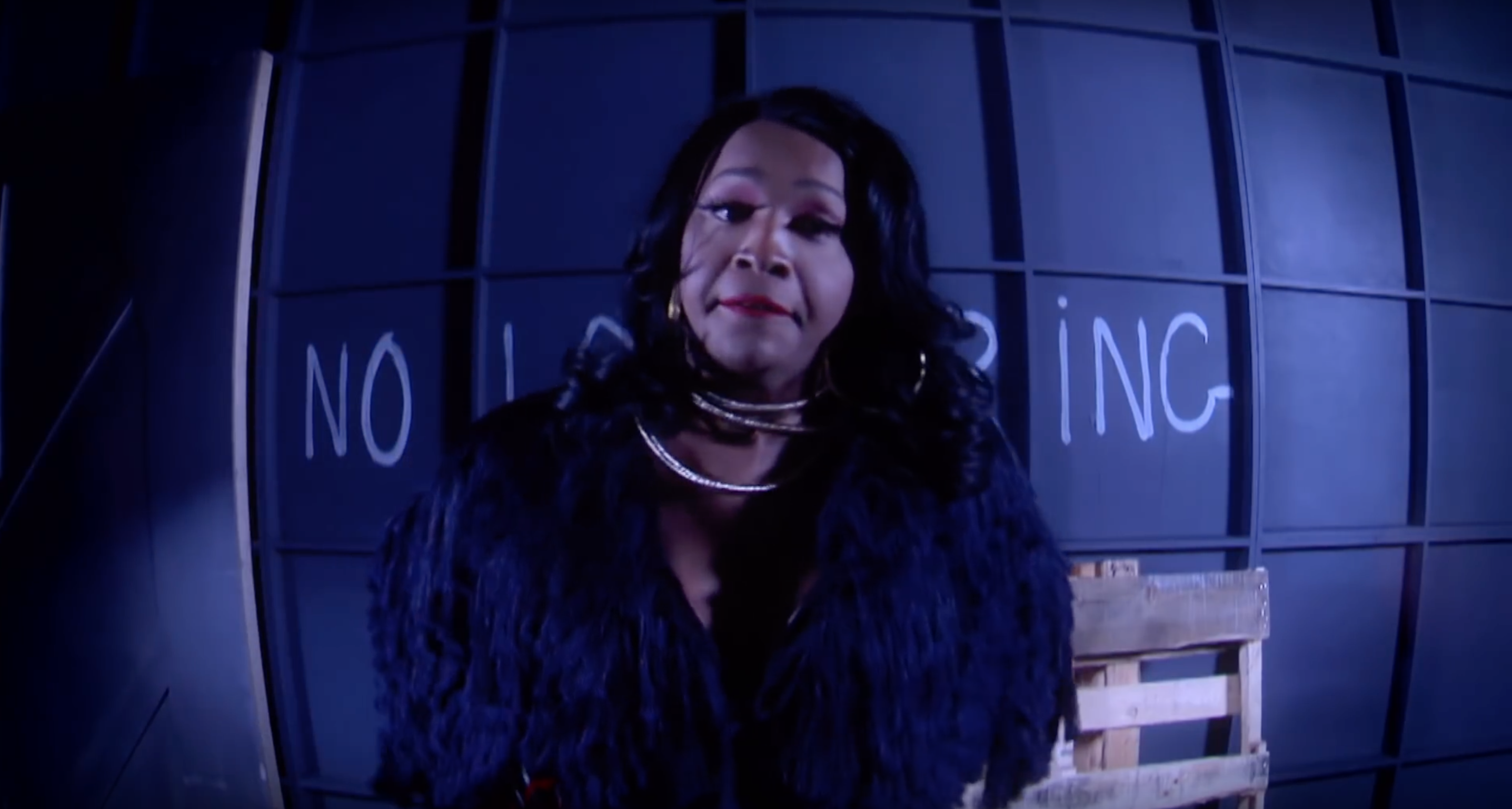 And then we had Silky who literally just tried to bulldoze down the fake wall. Still, it got her through the door I guess. 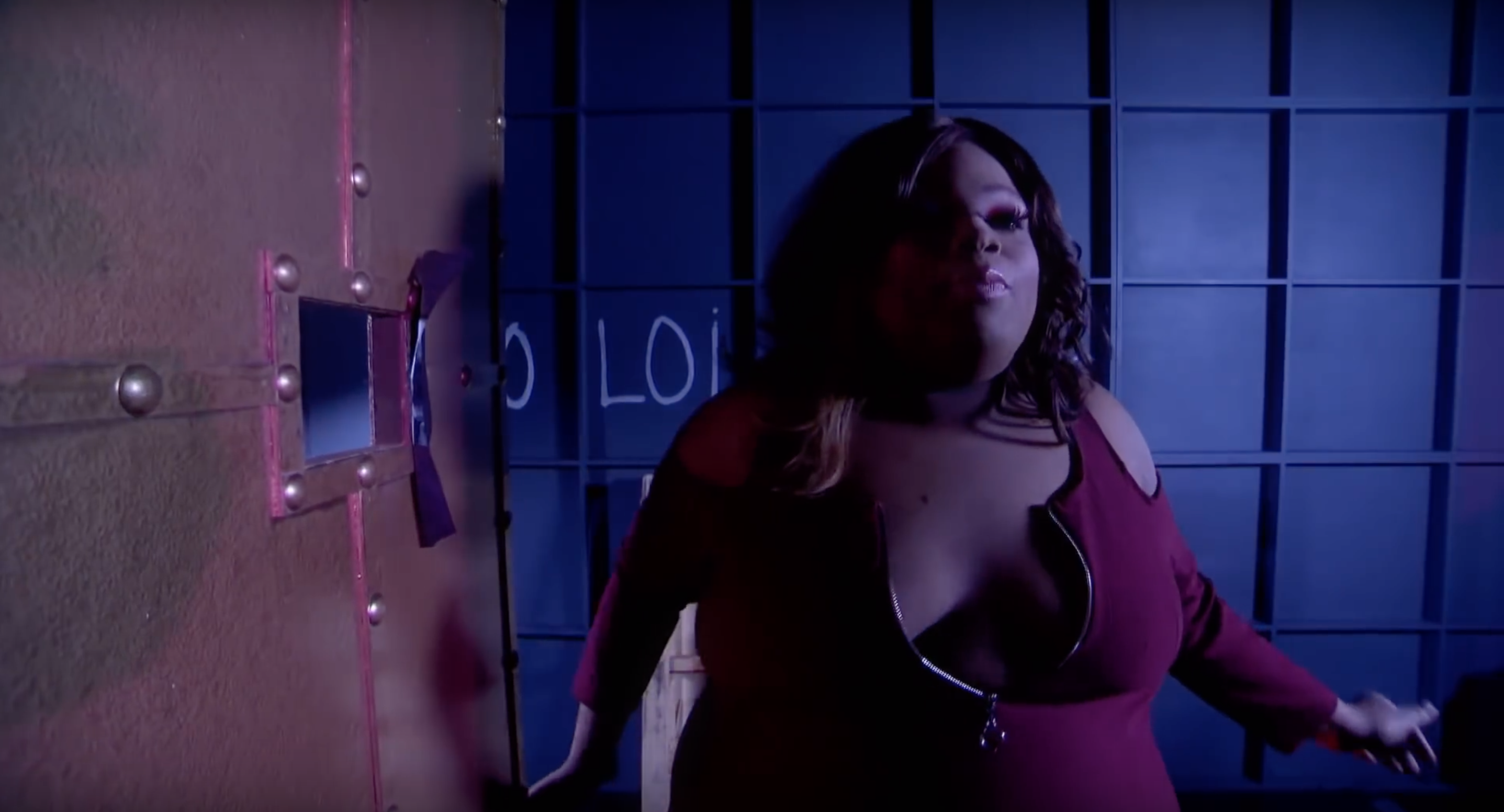 in the end, Nina West and Ra’Jah O’Hara were victorious in the mini challenge which made them both team captains for the main challenge. 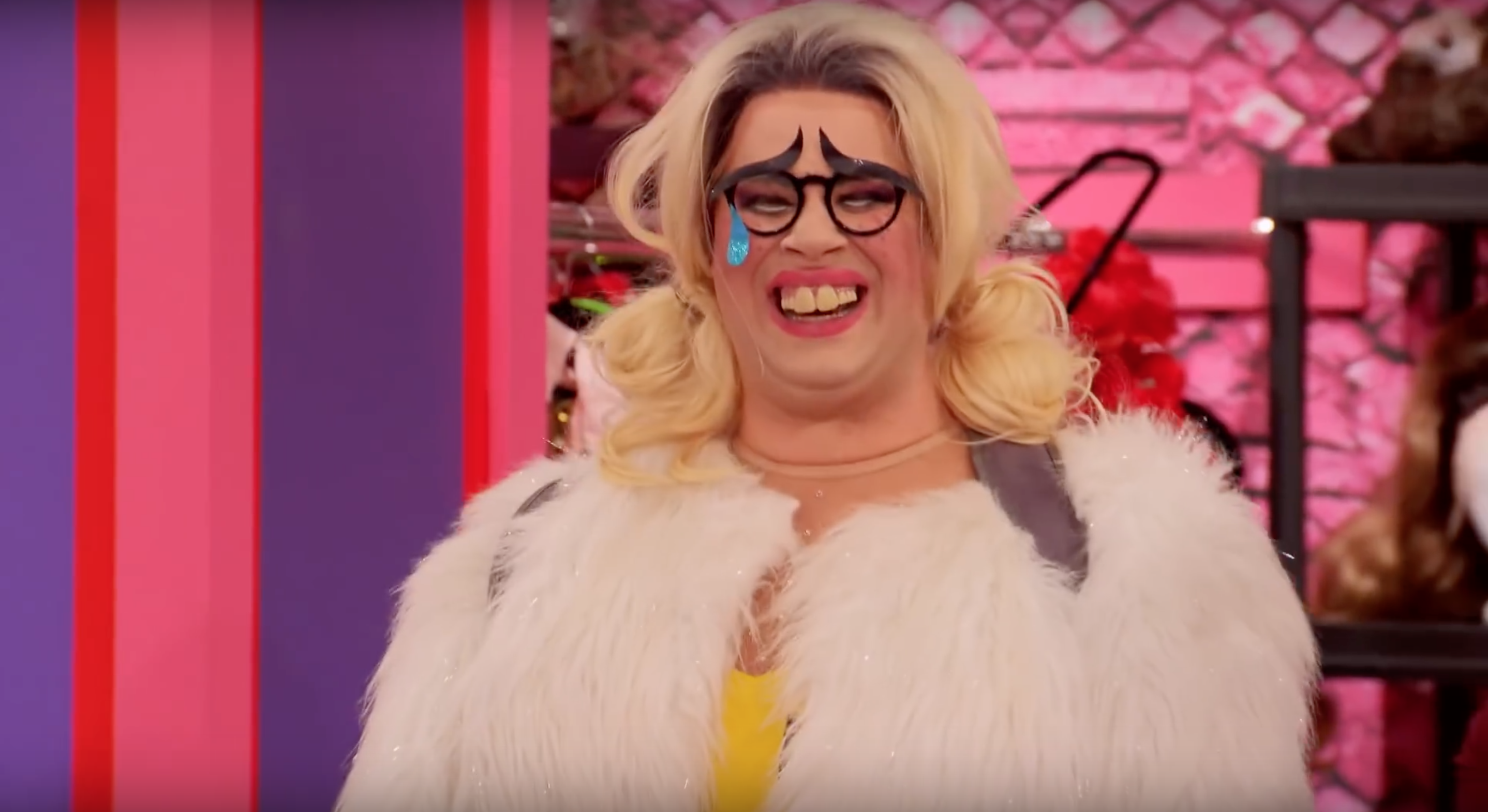 Ru came in to let the queens know that this week’s maxi challenge would be creating rival evangelical television shows where a celebrity would be their Lord and saviour. Each team got to pick their own musical legend to be their spiritual leader and then they had to make a live broadcast celebrating them.

Much like the mini-challenge, Nina absolutely killed this challenge. She had the right level of southern charm, crazy personality and faux-friendliness that you’d expect from a televangelist. Nina steared the ship and co-hosted her team with class and perfection. 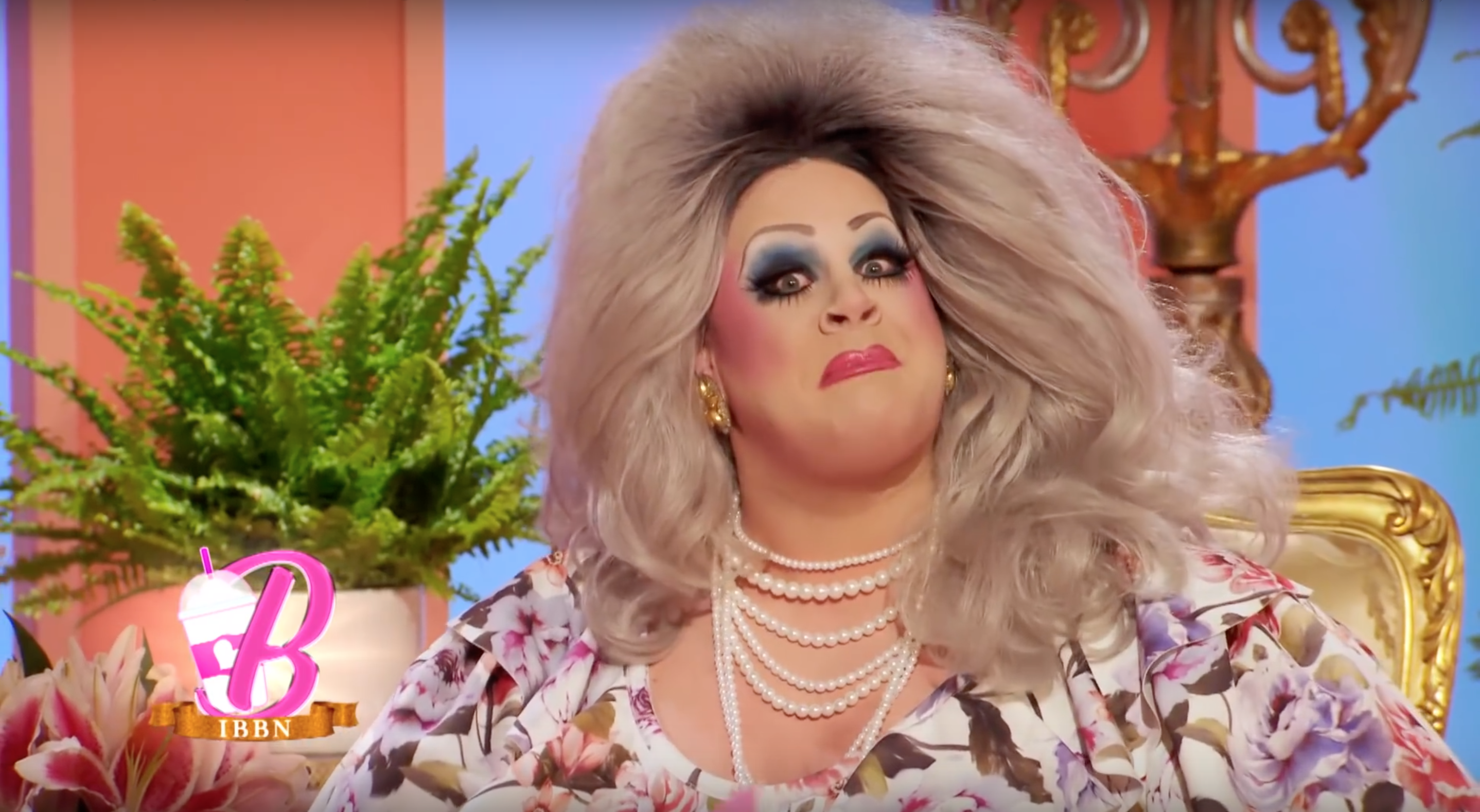 I also think Vanjie did a great job, she delivered her live conversion with a real sense of humour, hyped energy and her usual screaming gravelly voice. She delivered her ‘sermon’ brilliantly and kept the tone and mood right.

But there was a queen who surprised me, Ariel did a great job in this challenge. For me, I think she looks great but she hasn’t wowed me yet. However, she managed to do wonders in this team challenge as one half of the musical double act. 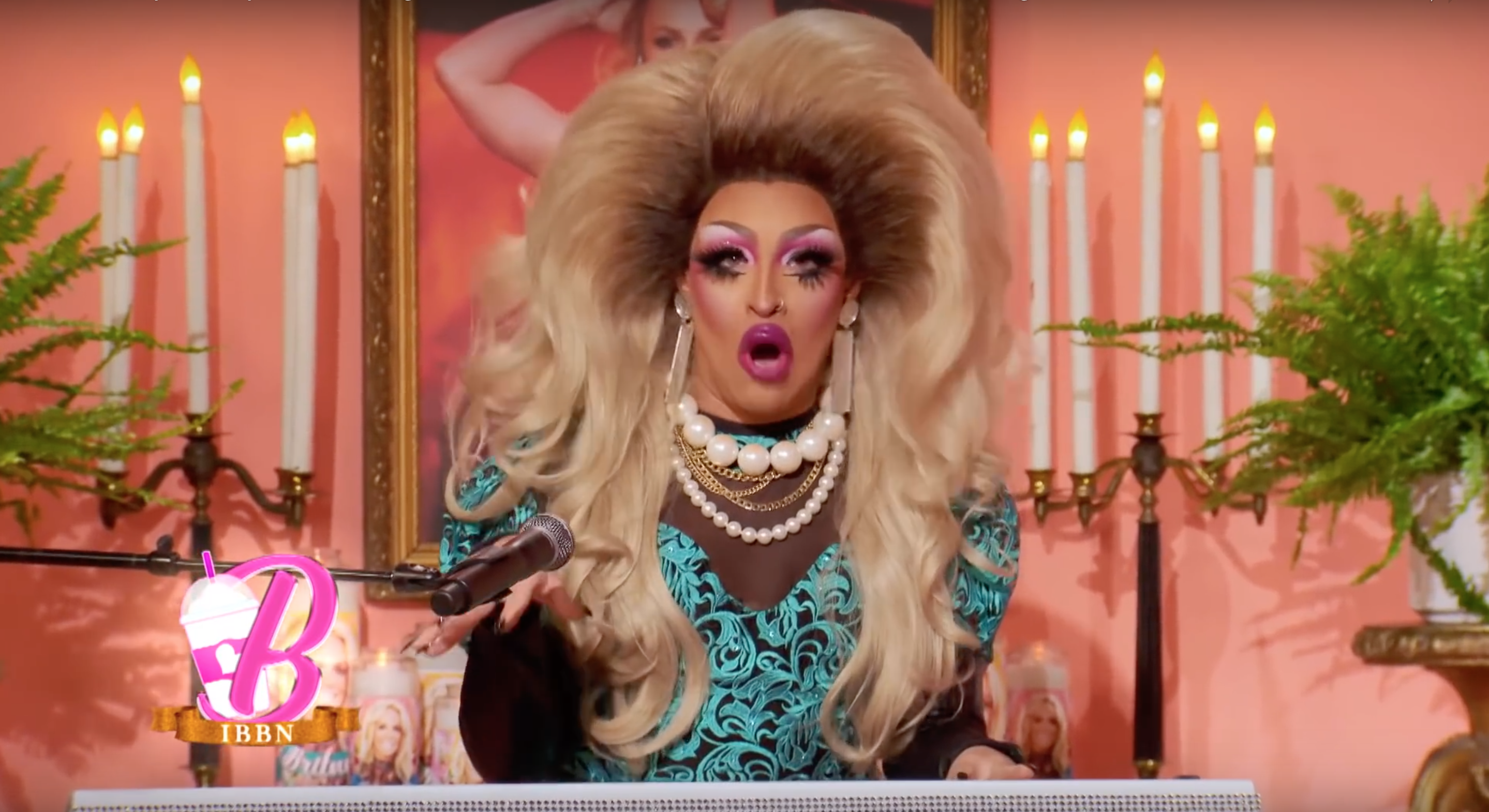 Ariel’s “This Little Light of Mine / Gimme More” medley was brilliant and between her and Silky, they both nailed the challenge. Overall, I felt the whole team did an amazing job. The only weak link was Mercedes who knobbed up her only joking she had. But hey, someone’s gotta be the weak link – at least she was on a great team.

Ra’Jah’s Team – “We Belong Together”

From watching the episode, it was fair to say that the other queens didn’t quite have the same ‘magic’ as Nina’s team. The team went a long way round to choose their diva. They mentioned Dolly, Whitney, Britney and everyone in between. But then they decided on Mariah and for some reason, they all thought that was a really good idea despite none of them really knowing any Mariah references.

Shuga and Scarlet hosted their team and it was pretty stilted but awkwardly, not the worst in the group. Plastique tried to do some sort of exorcism character that got demonic when people called out Mariah. I like that she tried something different but it just didn’t read well. 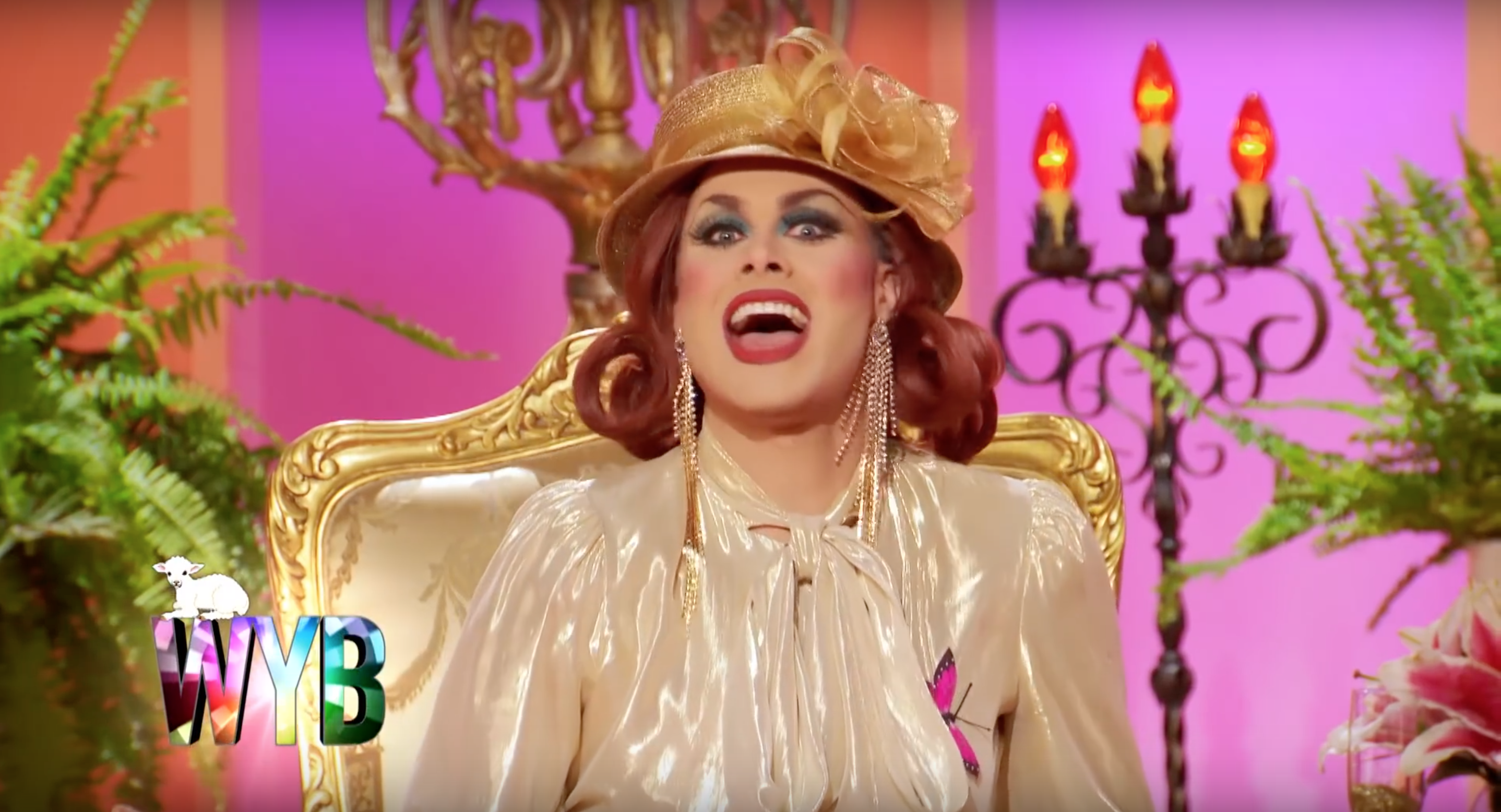 But by far, the worst part of the team had to be Ra’Jah and Honey doing the musical segment. Compared to the other team, this was a mess. They kept singing over each other, spewing their lines and delivering the worst harmonies in town with no references to Mariah.

After the challenge, it was back to the werkroom to get ready for the runway and Yvie was full of surprises. What surprises? Well, she got completely naked to paint her noodle pink for her costume and I think I’ve developed a weird crush on her. 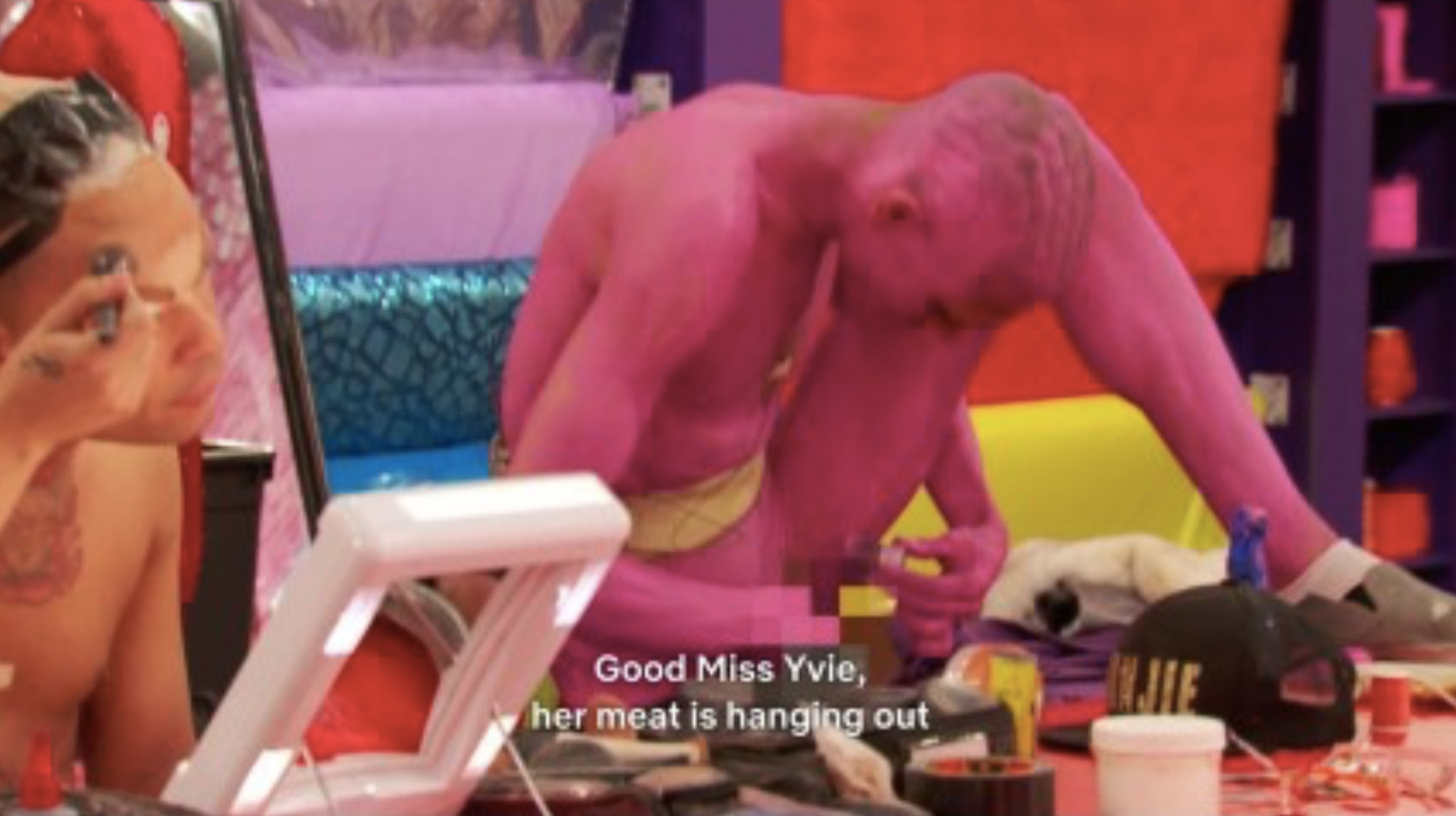 Category is: Fringe – Toot or Boot

This week the queens were asked to wear their best-fringed attire. 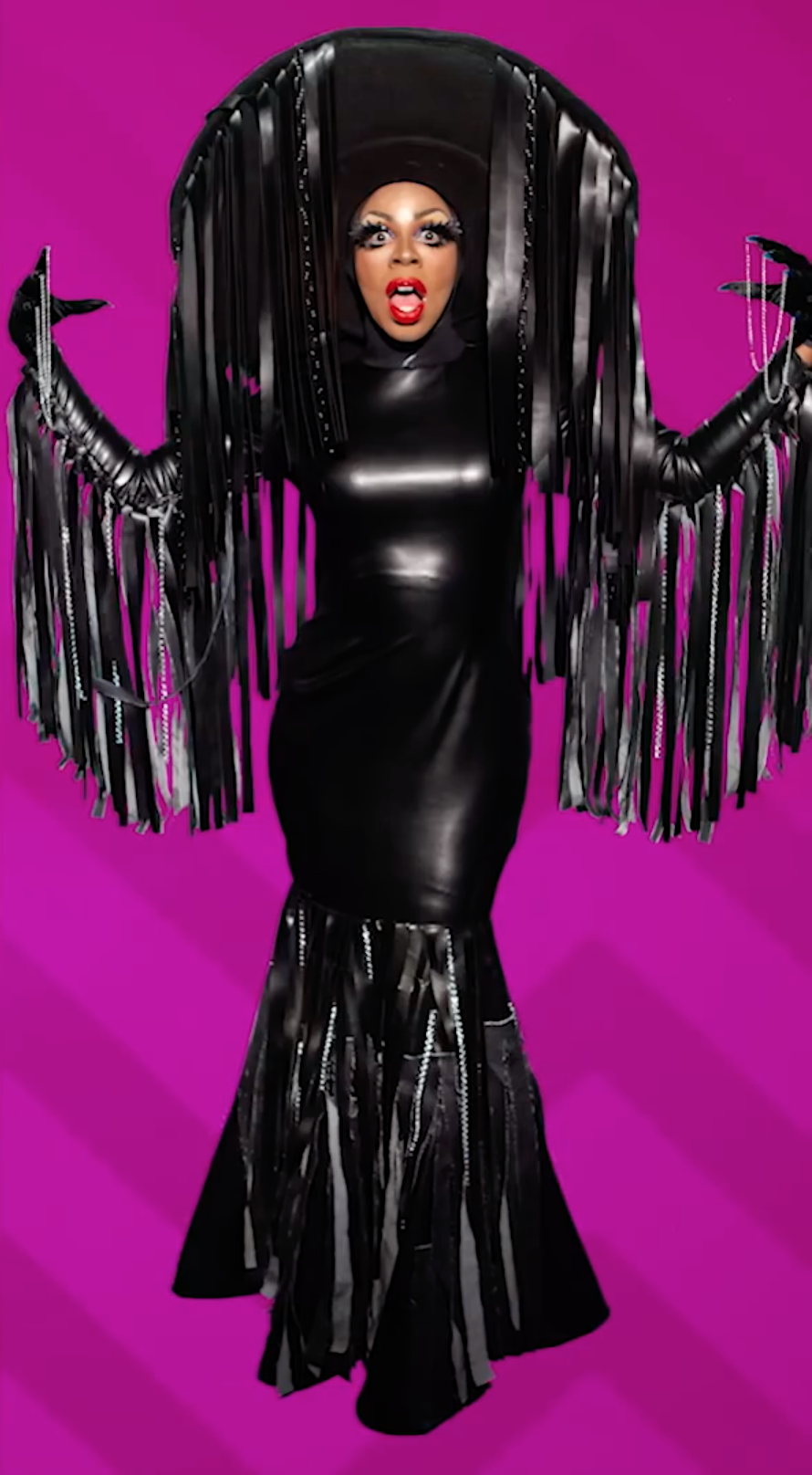 This was a very safe toot. Nothing groundbreaking but she looked good in it. At least she wore something a little different. 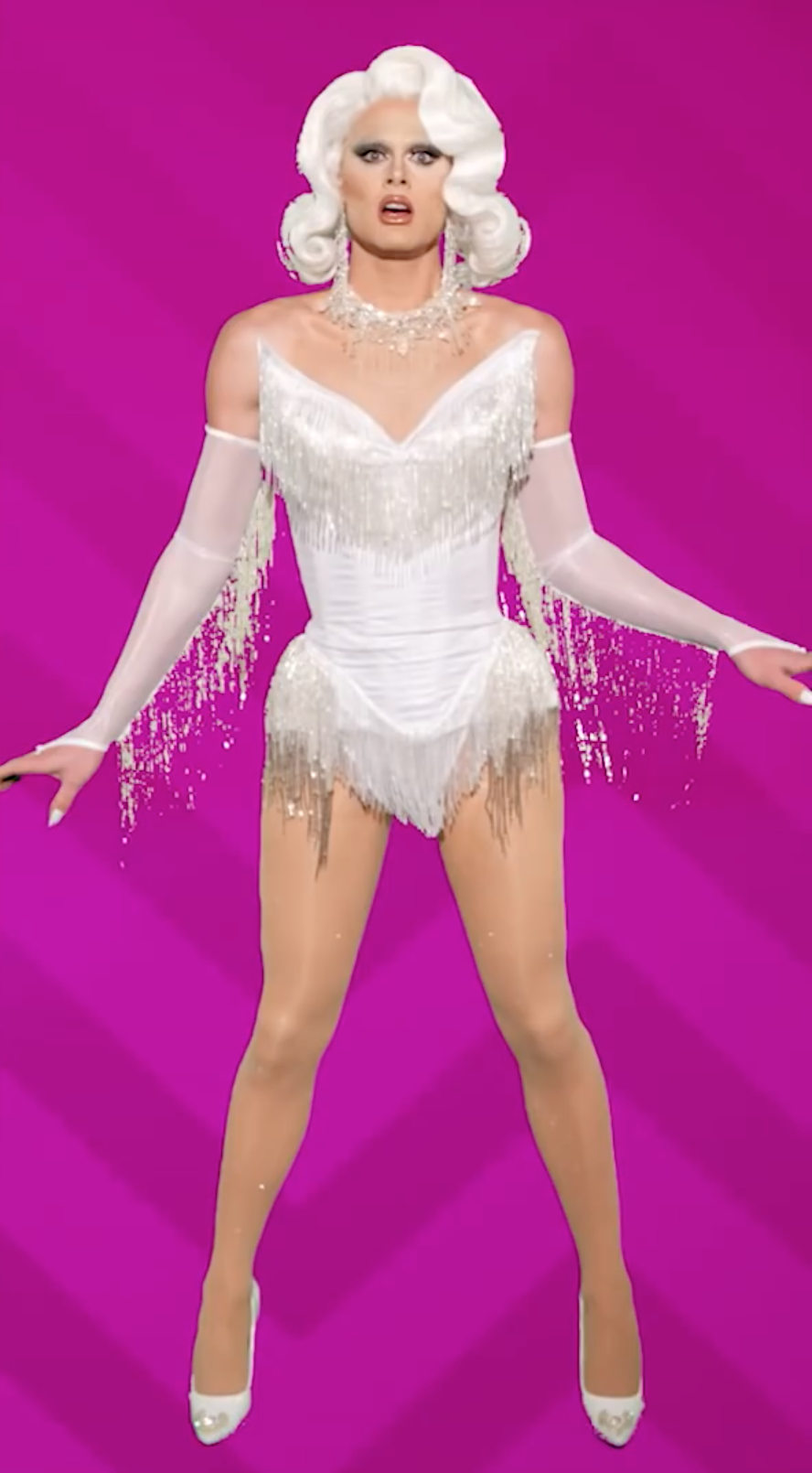 I adore this look. It’s a pure old school showgirl outfit, it fits her beautifully, the corset is beautiful and the fringing is subtle but effective. The wig also looks great with the outfit. This is one of my favourite outfits of the episode. 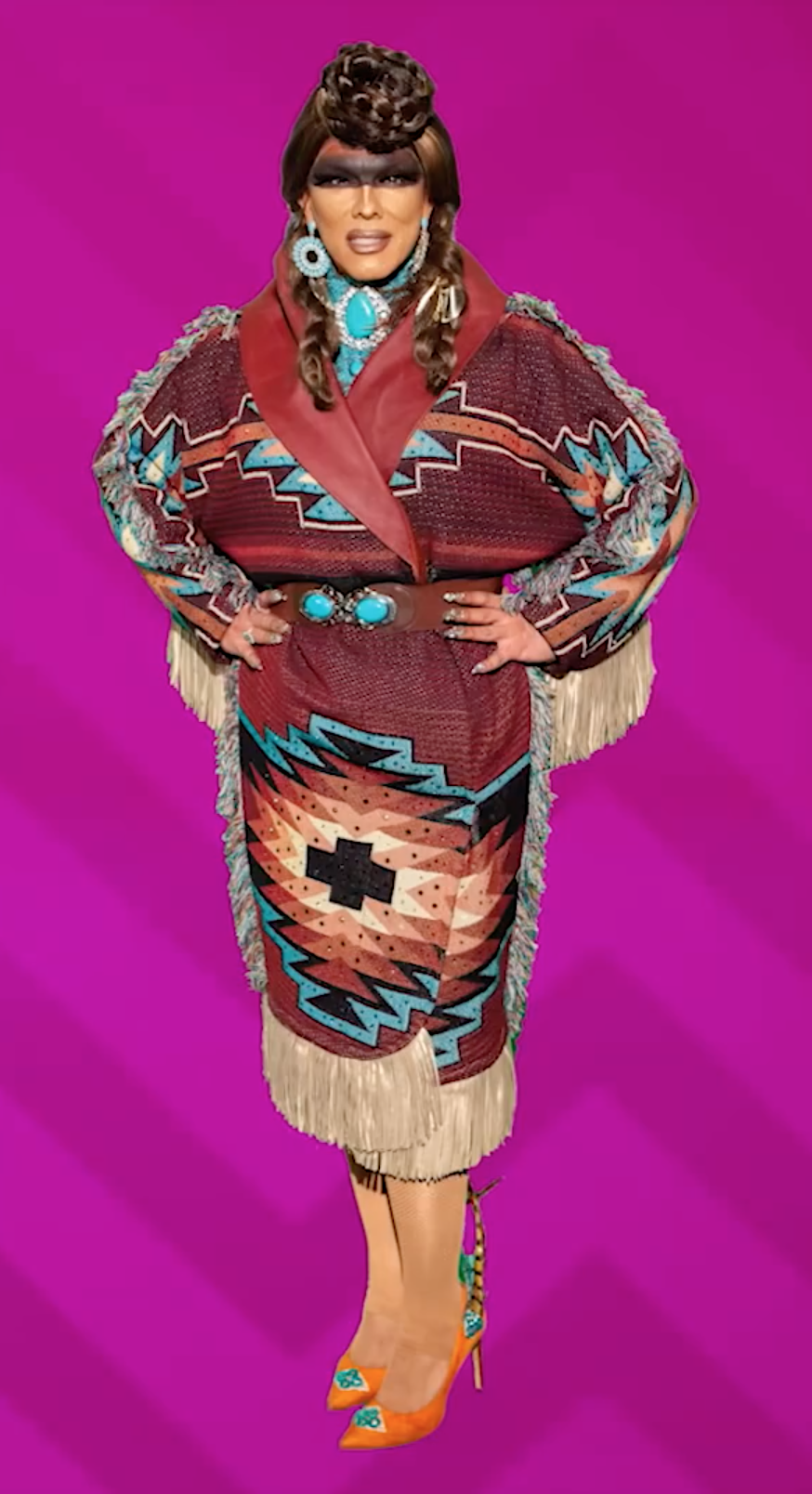 I loved this, it was nice to see a different take on a ‘fringe’ theme rather than just wearing an outfit with some fringe. The idea was great and the outfit underneath the reveal was equally as strong. 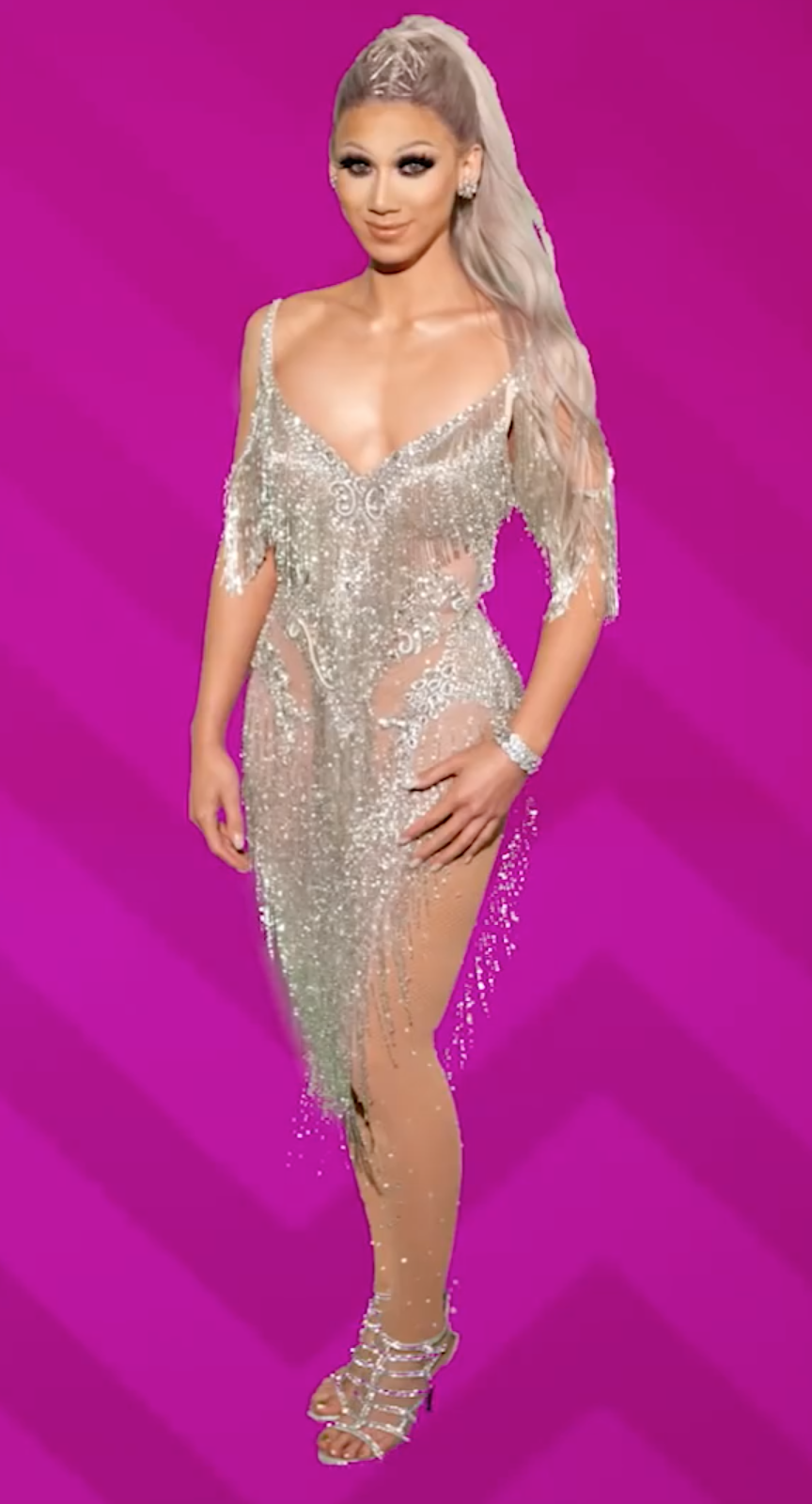 A simple outfit but she looks like a pop princess. The dress is gorgeous and the wig really suits you. For a queen who’s never heard of ‘pop culture’ she sure knows how to dress like Ariana Grande.

She looks amazing. Granted, the headpiece looks a lot more expensive than the dress but overall the whole outfit looks beautiful.

She doesn’t look bad, it’s just a bit boring. I like the boots though. 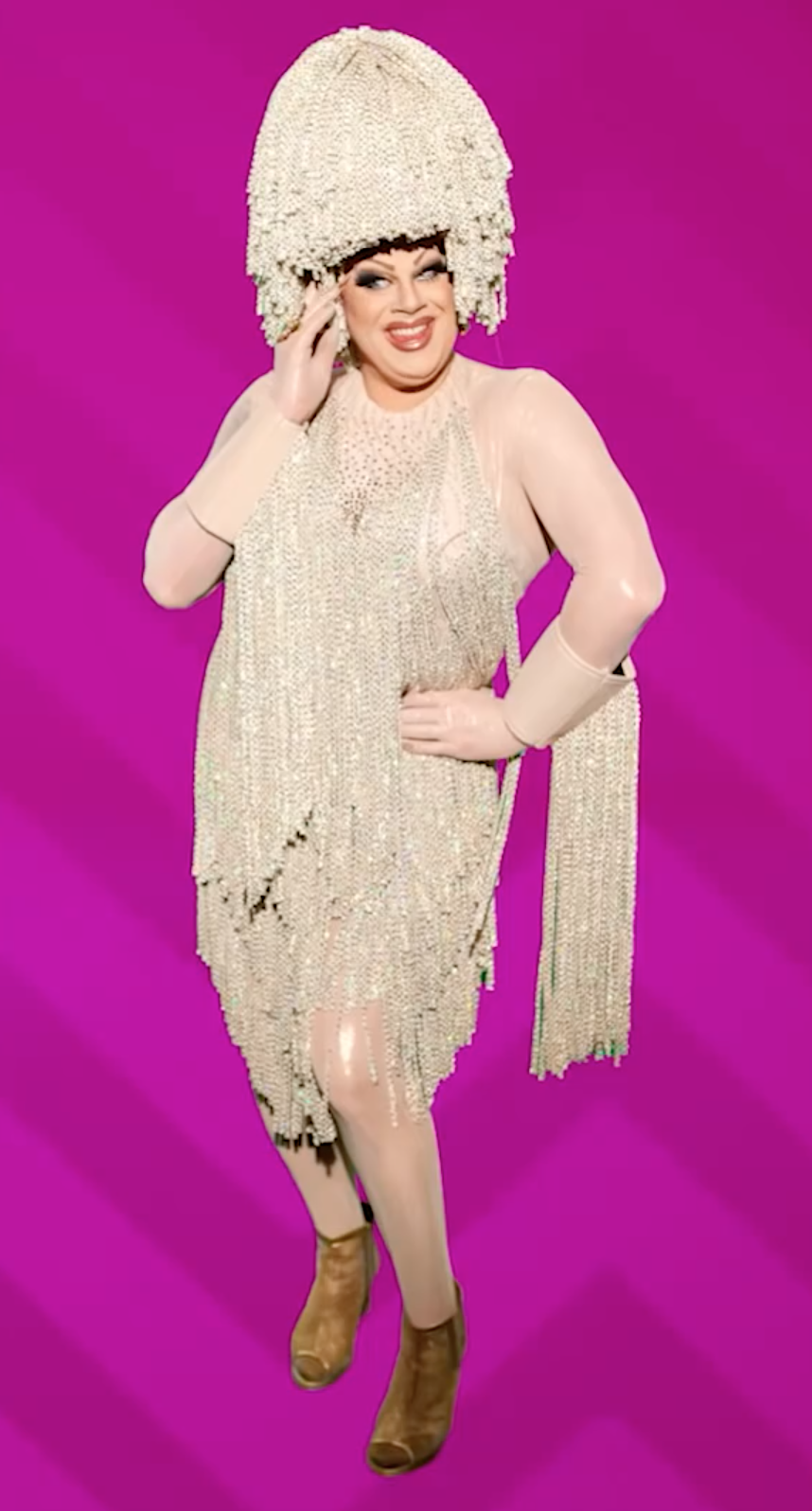 Love this, Nina looks camp, kooky and like a big diamond mop. The only thing I don’t like is the boots… they were pretty gross.

The daisy chain dress looks great. It was a nice way to mix up the fringe theme. 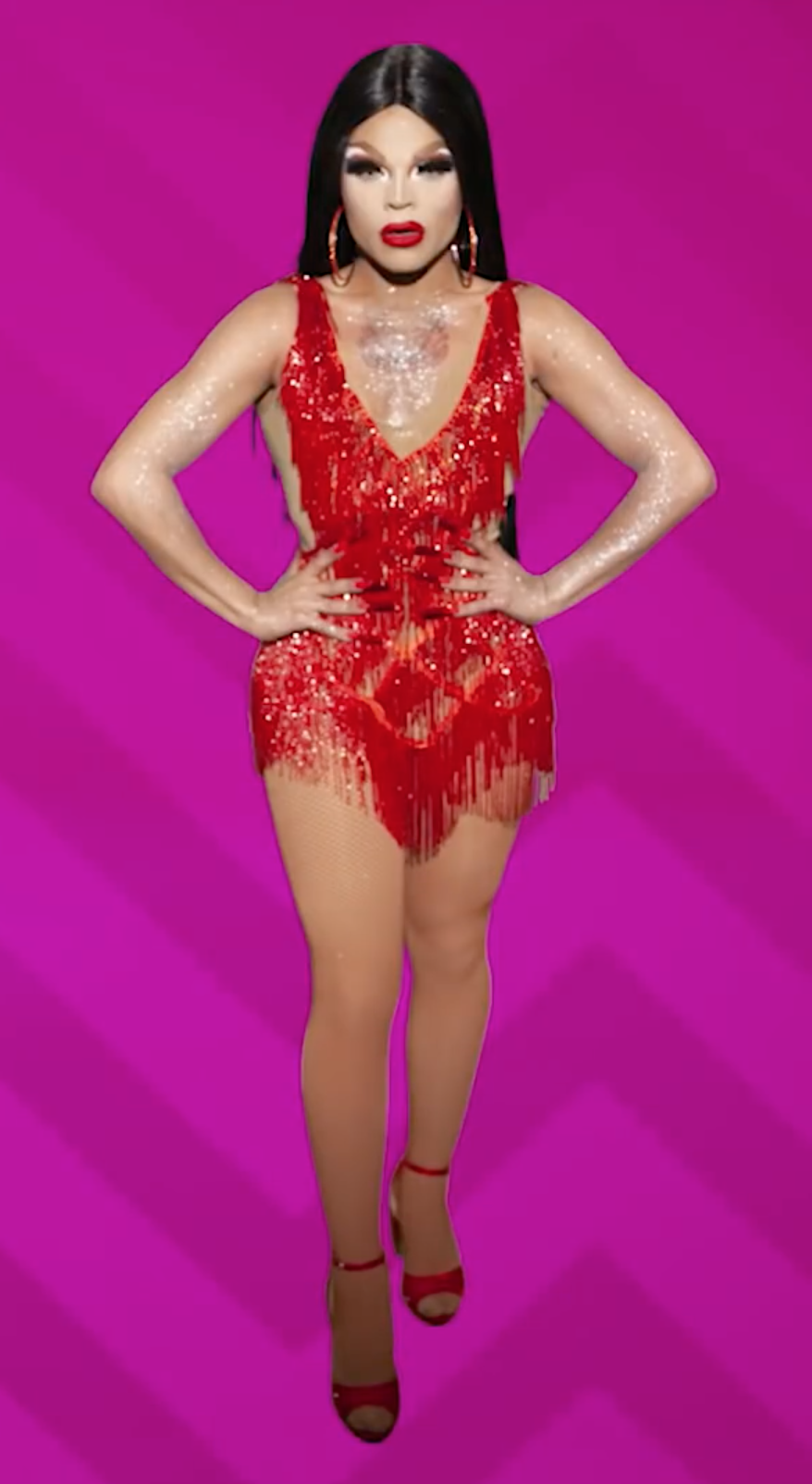 Is Vanjie going to wear anything other than red this season? She’d probably wear red even if the theme was green and just claim she’s colourblind. She looks great but I didn’t find it exciting. Also, the chest glitter has been bugging me since day 1, it looks like she hasn’t shaved.

Was the jellyfish idea a good one for the fringe theme? Absolutely. Was it the best execution? No. Did I start to develop a crush on her when she was painting her naked body pink? Yes, yes I did.

I mean, this was just a really boring dance outfit with an ugly hat. 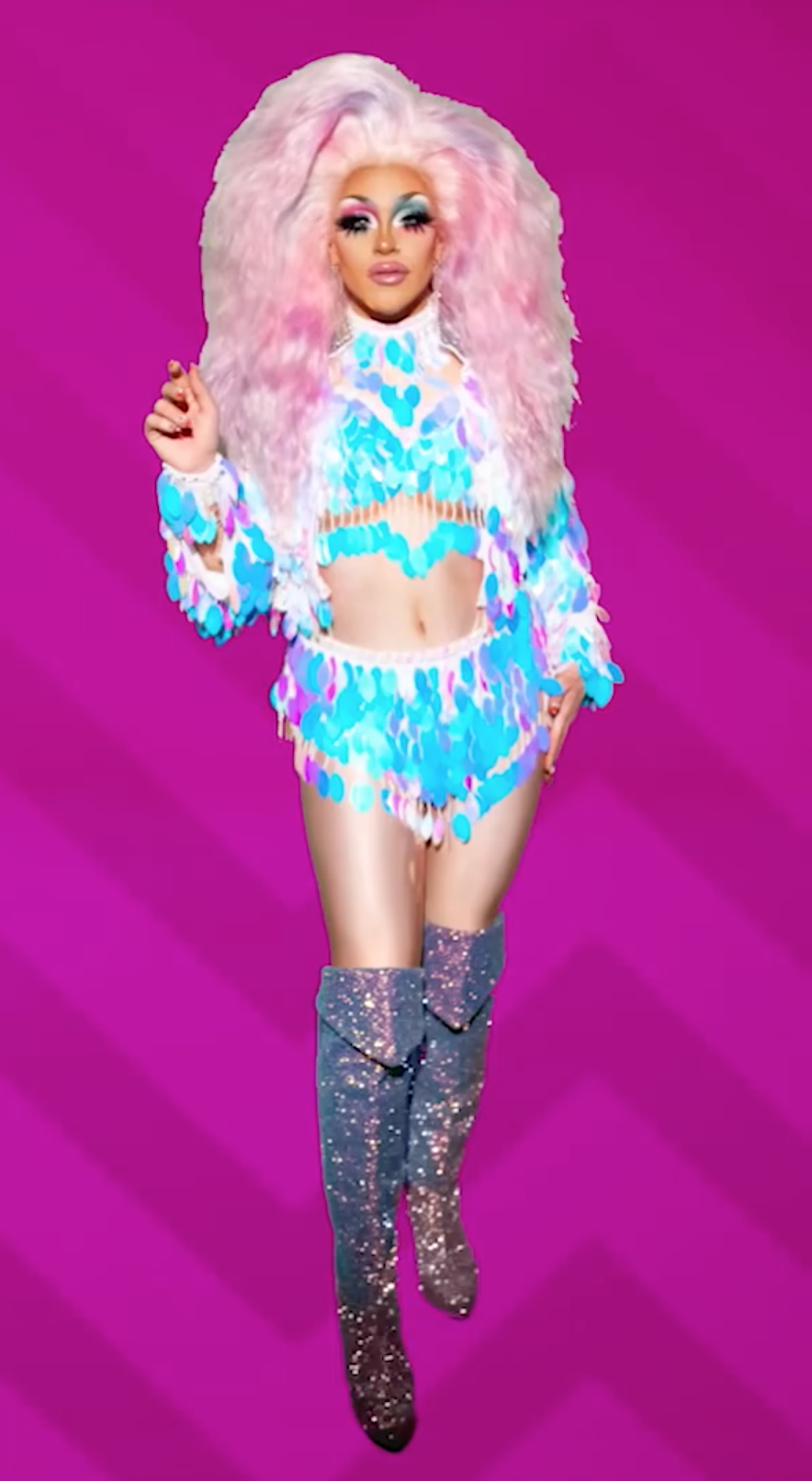 I liked this look but its more of a ‘sequins’ runway than a ‘fringe runway. She looks great every week but it’s getting a bit samey, much like Vanjie so I hope she’ll start to mix it up a bit.

It was just a bit boring. It was a bit of an obvious fringe dress for a big girl to wear. Also, I didn’t like the heels or the lightning bolt on her face.

Firstly, I never realised how beautiful Troye Sivan was but I think I’m in love now. Anyway, to the critiques… 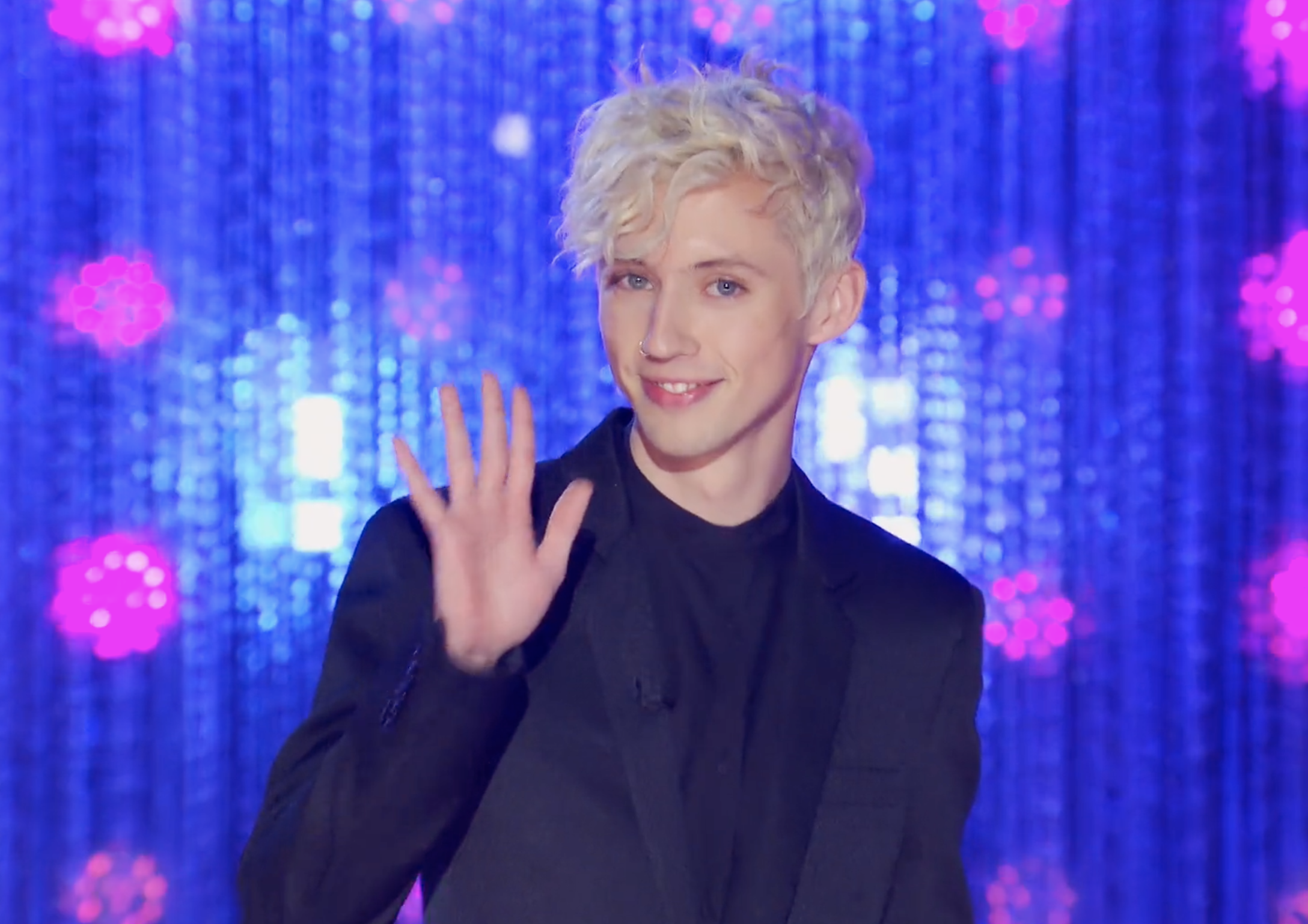 It was pretty obvious which team did well and which team didn’t. We saw that in the challenge. So, of course, Nina’s team was the top and all safe. 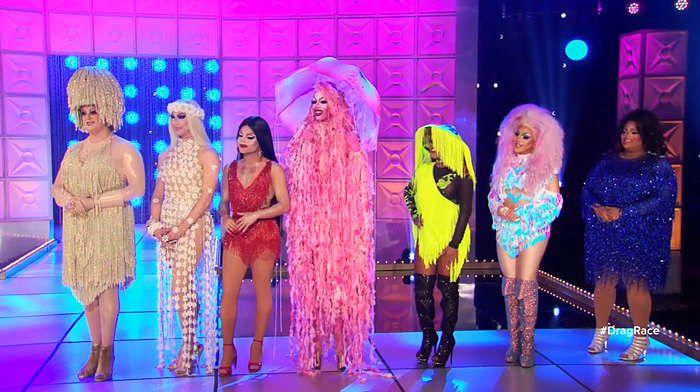 Nina was the winner this week for steering the ship and I couldn’t be happier with the results. She truly deserved this win, she had a believable character, a great runway look and a whole heap of fun.

Then we move on to the bottoms. The other team were obviously in the bottom and so Ru decided to throw his favourite question their way: “Who do you think should be eliminated?”

Clearly, the queens didn’t want to throw their sisters under the bus so they all took it upon themselves to take responsibility into their own hands. Each queen decided to say what they did badly in the challenge rather than nominating another queen.

This didn’t tickle Ru’s tuppence as he took matters into his own hands and he chose to put all 6 queens up for elimination. That’s right, it’s the shows’ first 6-way lipsync!

I know! plot-fucking-twist! What made it better was that the lipsync song was ‘Waiting For Tonight’ by Jennifer Lopez – gag. In the end, Honey was eliminated and it wasn’t a shock as you could see it over her face and over the face of Ru who looked repulsed when she jumped off the stage and wiggled around on the floor.

I have to admit, I really liked this episode. The team that did well did really well, the team that bombed, bombed so badly that it became a car crash that you just couldn’t turn away from. And, although twists are now not a shock on the show anymore because they put one in wherever they can, the 6 queen lipsync did gag me, but mainly because it was a great song choice. Come through J Lo.

This week, I gained 0 points thanks to the 6 queen lipsync. Tom got 4 points which has taken his total to 14 points and mine stays on 24 points. Vanjie is now on 7 points. I don’t know how long I’ll be able to maintain my lead, but let’s hope that the good times keep on rolling.