I, like the queens, was still in shock over Manila’s departure when this episode aired. Like, I’m fine, I’m not going to write death threats or find a safe space to retreat to – it’s part of the game, but I can’t pretend I wasn’t gutted. However, after Shangela was robbed on All Stars 3, I’ve just accepted that anything can happen.

Trinity seemed to be the most vocal in saying how shocked she was that Manila was eliminated. From day 1, Trinity said she would base her decisions on track record and she has absolutely done that throughout the competition. 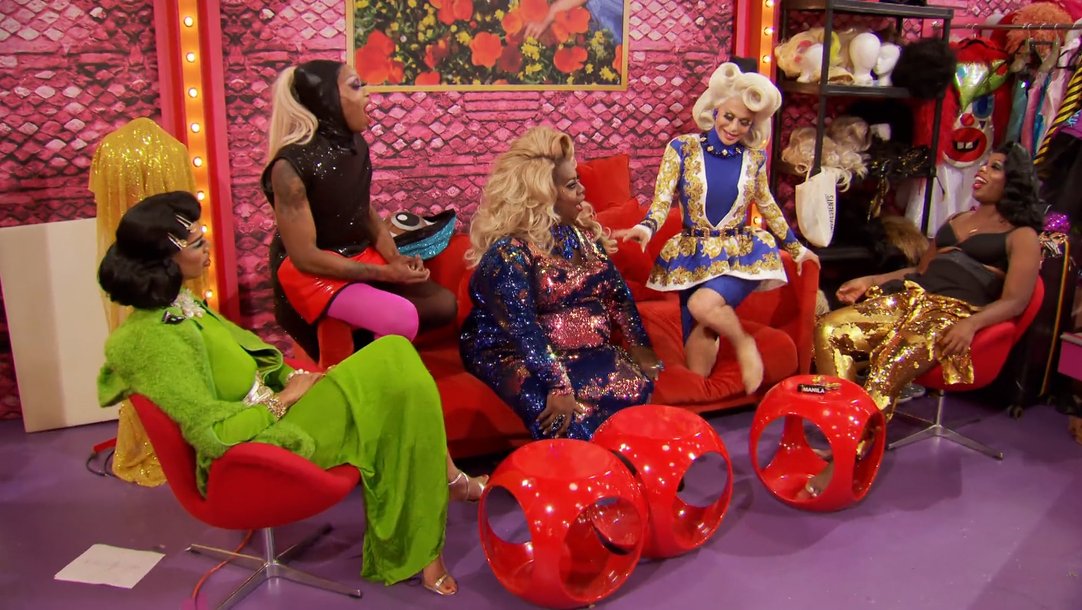 Trinity called Latrice out for not being as upset as Manila was when Latrice was first eliminated and Latrice obviously wasn’t that bothered because she’s just here to win (*spoiler alert* she won’t). And then the real shocker kicked in – Monét had also chosen to send home Manila.

I know, I was stunned too. This dang competition had me fucked up – and I thought All Stars 3 had some travesties and what not. Dela leaving, Kennedy making top 2, Shangela being mugged off by the fellow contestants  – it was a whirlwind.

The Challenge – Sex and the Kitty Girl 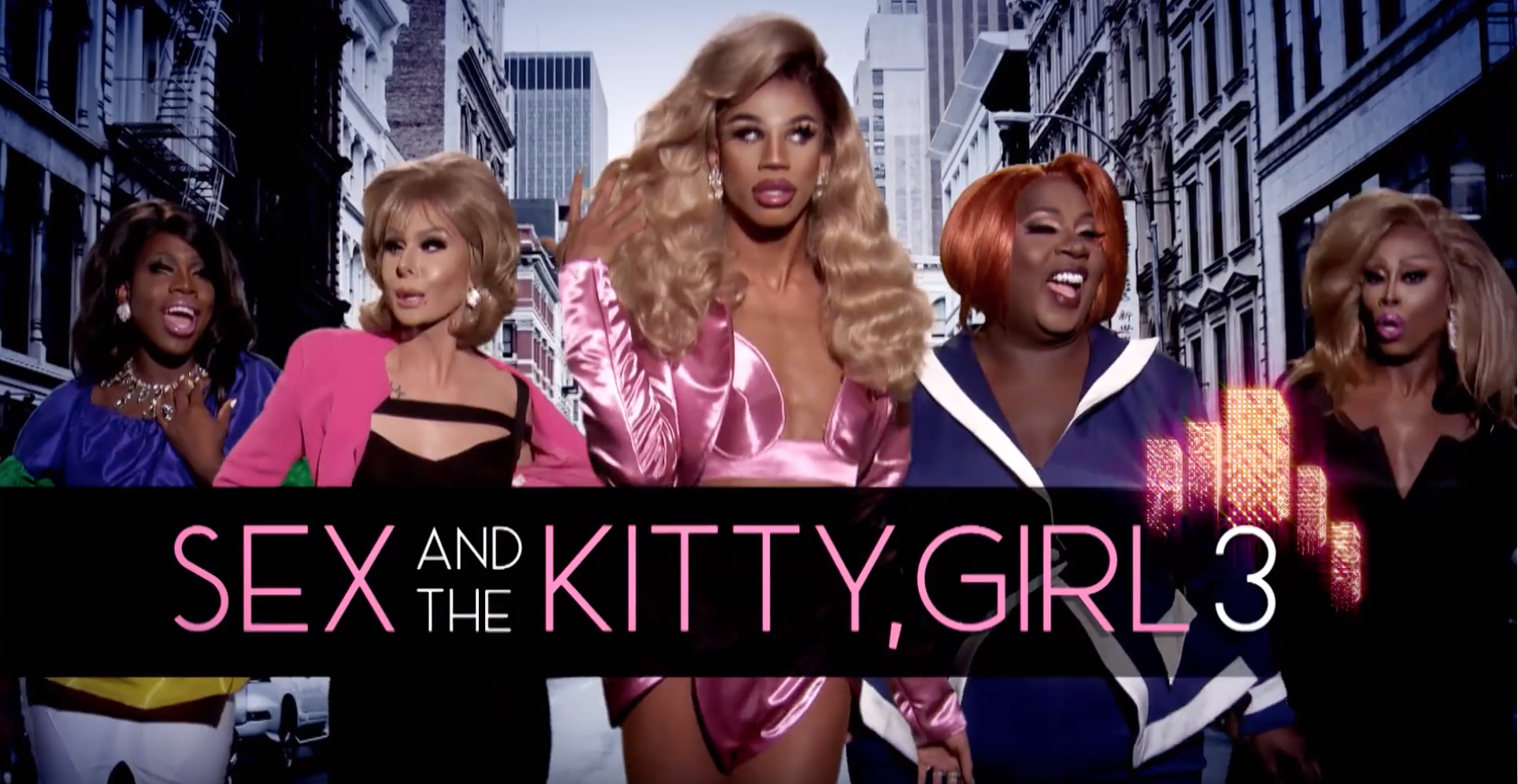 As Naomi won the lipsync last episode, she got to assign the roles. Immediately, Naomi too the role of Carrie Bradshaw (Sarah Jessica Parker), Latrice took on the role of Miranda Hobbes (Cynthia Nixon). 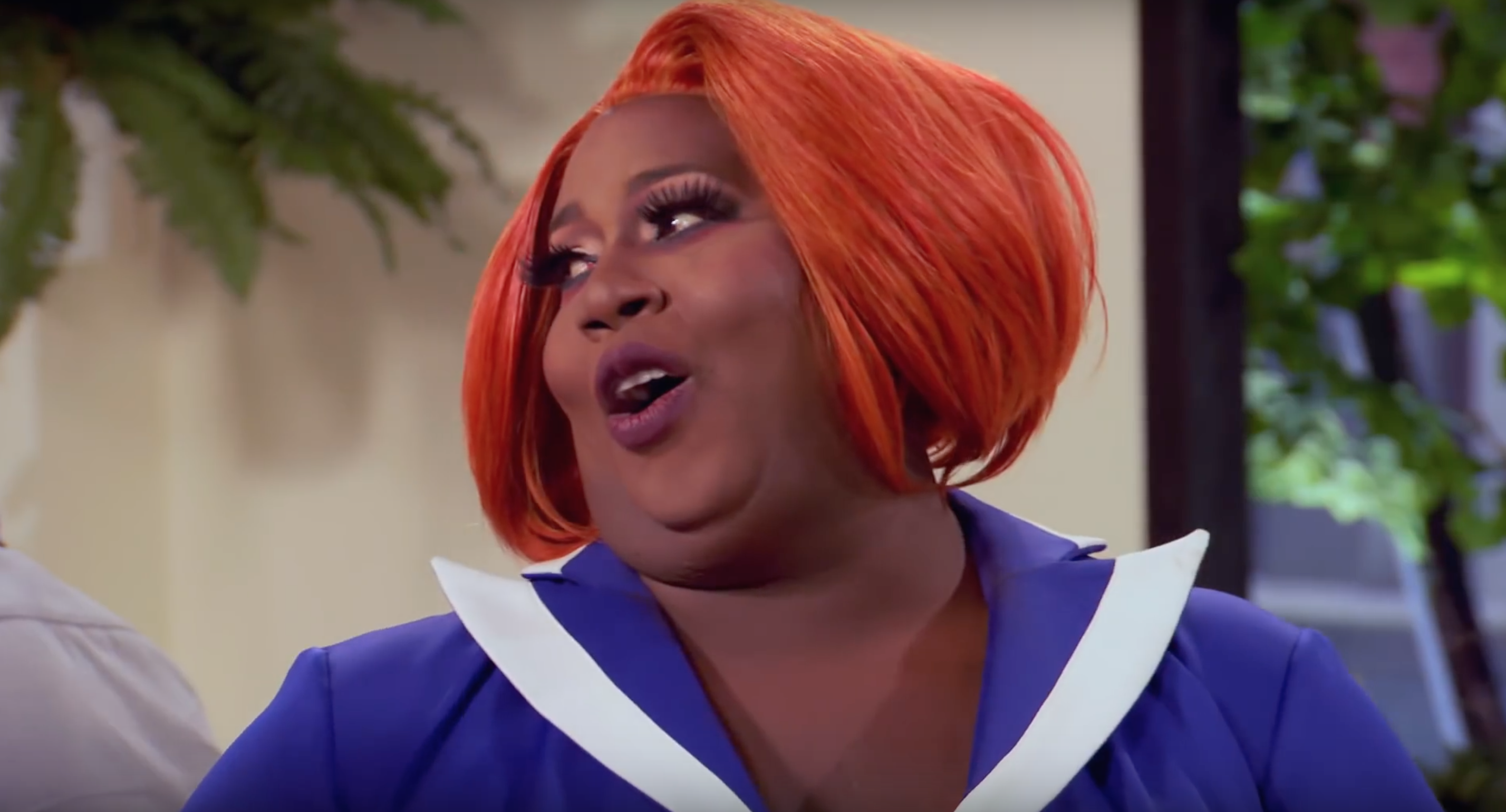 Monique was happy to take the drunken wreck small role of the woman who appeared in one episode and fell out of a window but was back to party. 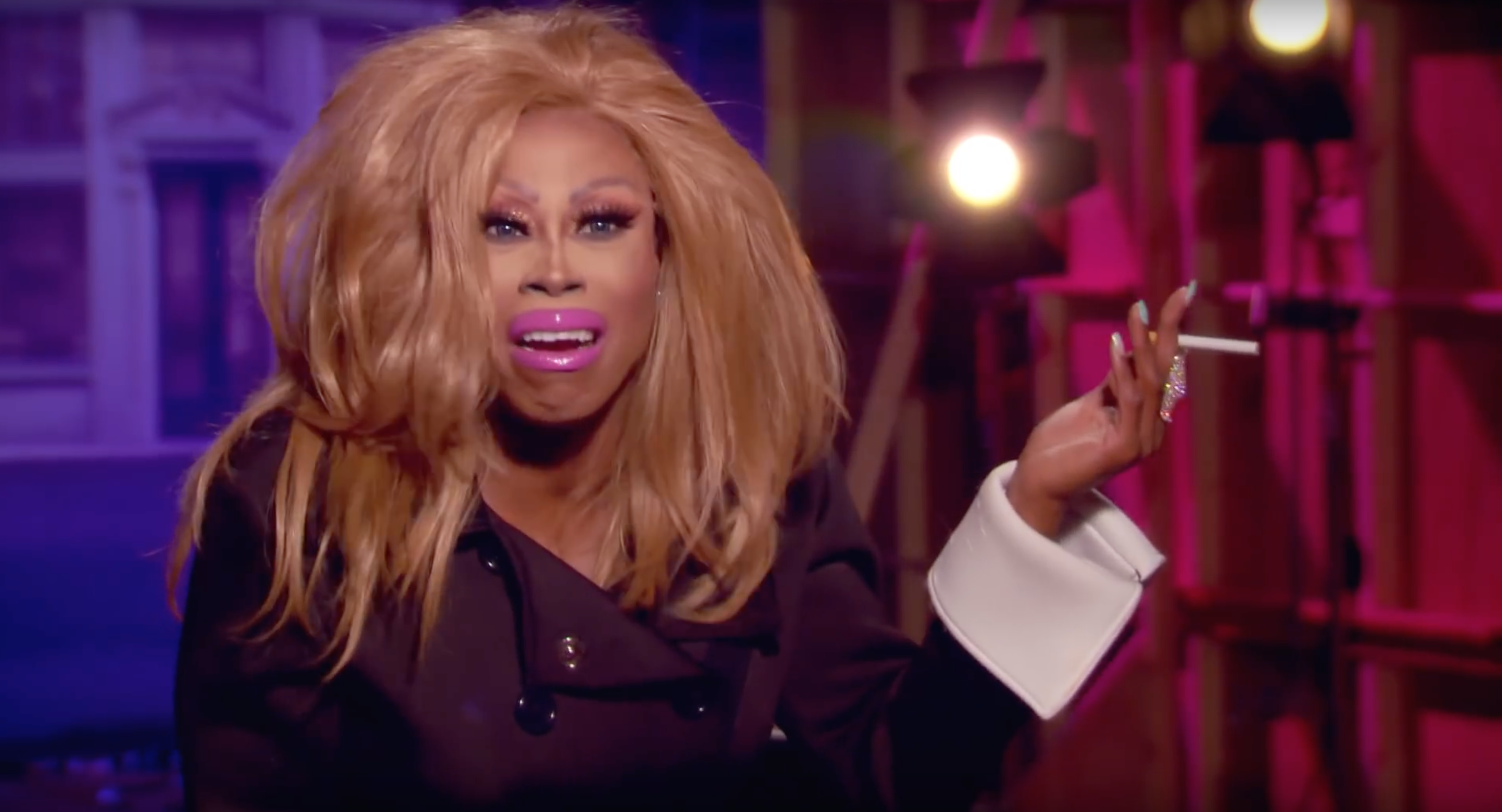 After a tense ‘best of three’ battle, Trinity the Tuck reigned supreme and earned her spot as Samantha Jones – much to the dismay of Monét X Change. 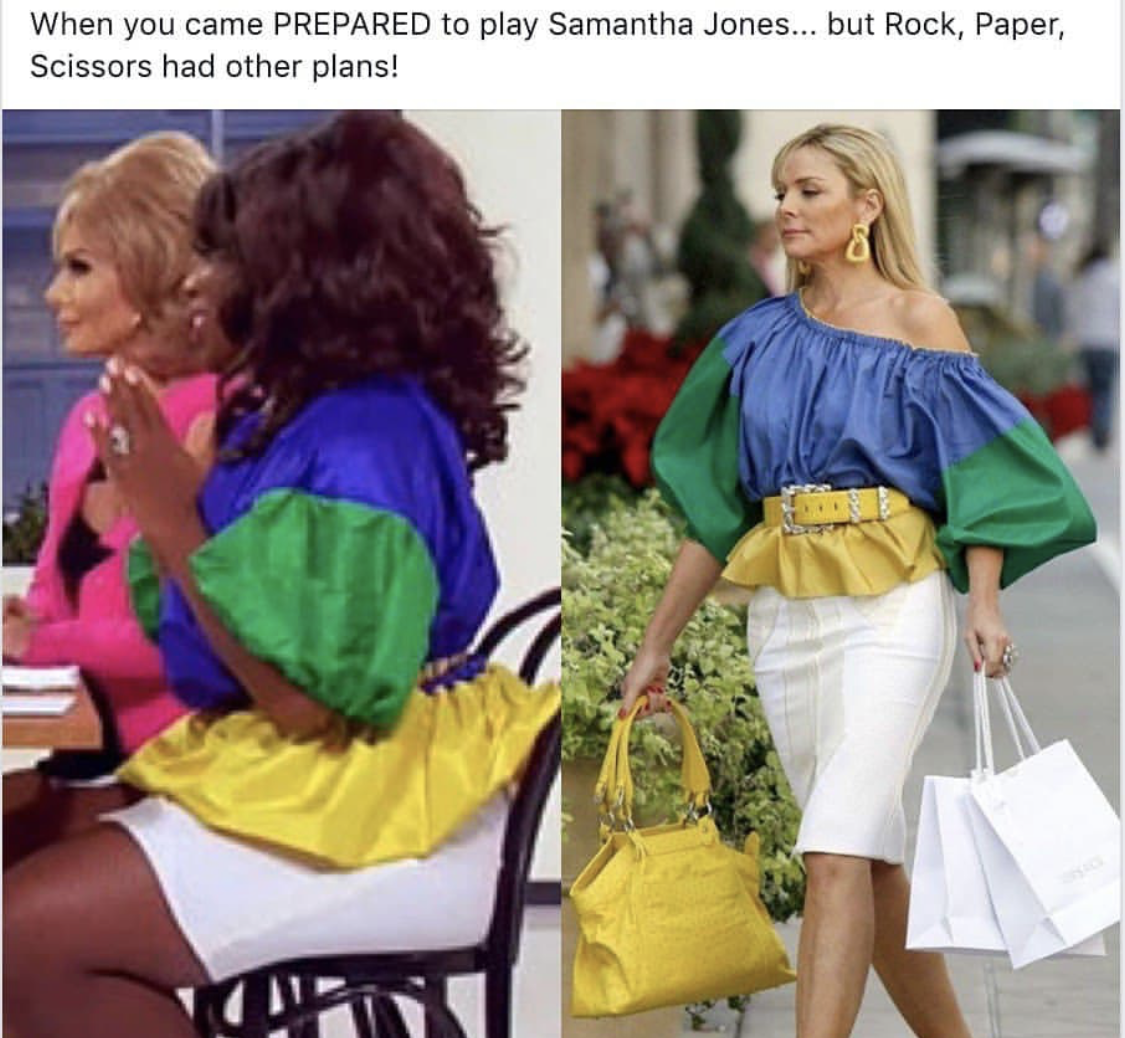 I have to admit, though I did appreciate Monét’s Samantha impression, I’m very happy that Trinity got to play her as I think she did the role justice. 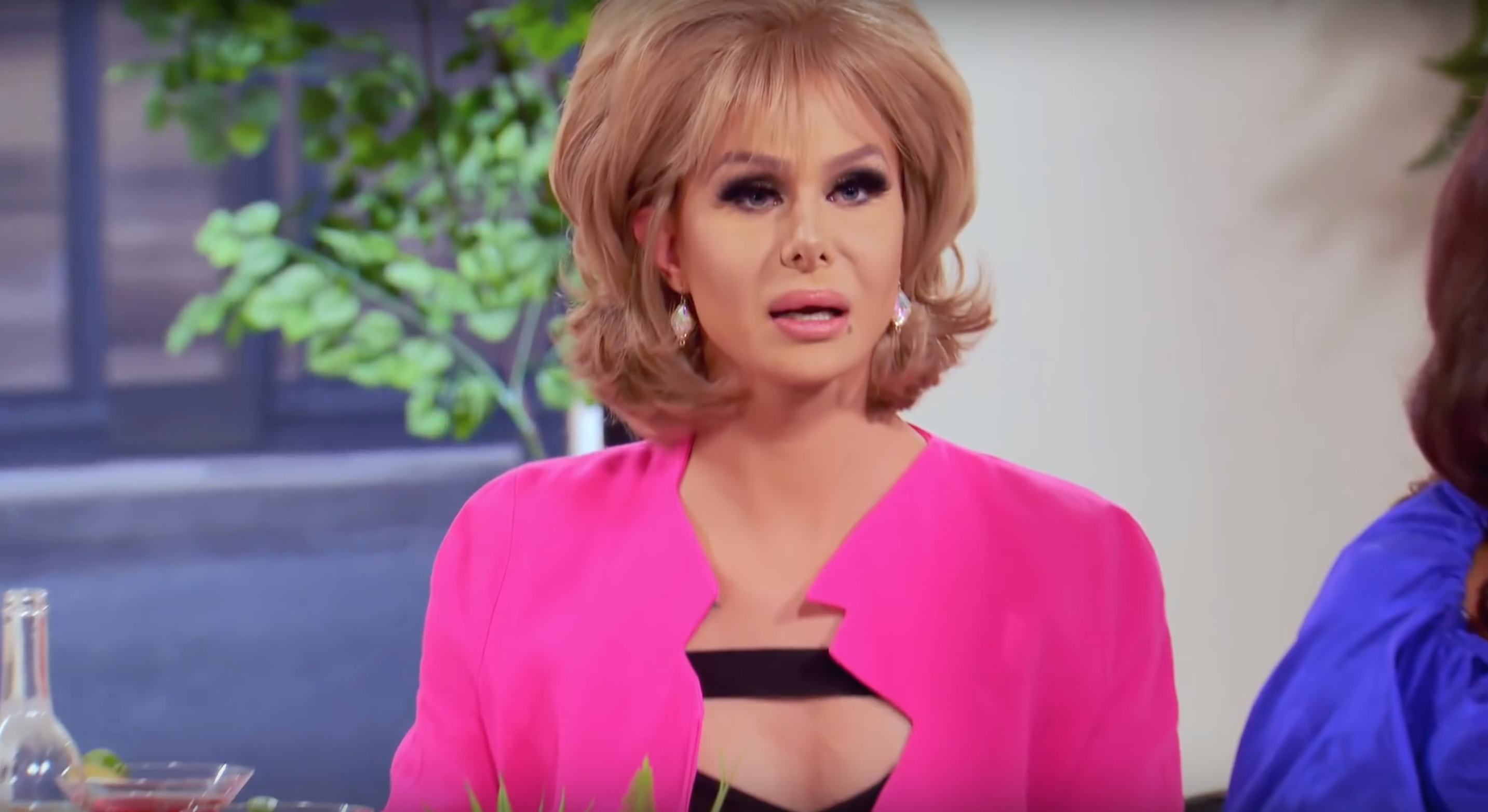 Anyway, the whole story was a joke narrative where Sex and the City had made a comeback and it was a fake ‘tell-all’ documentary about why Samantha would never do a SATC3 movie. It was a bit weird, but it was entertaining all the same.

It was a bit of a bumpy start for most, firstly, Naomi Smalls could not grasp the directions that the judges were giving her on set. She kept making SJP bitchy and nasty and that’s not her character (so I’m told, I’ve never seen any episodes, just the film – and it was shit). Monique also had a bit of a rocky start with her wig, as per, but she definitely got into the swing of it somewhat. 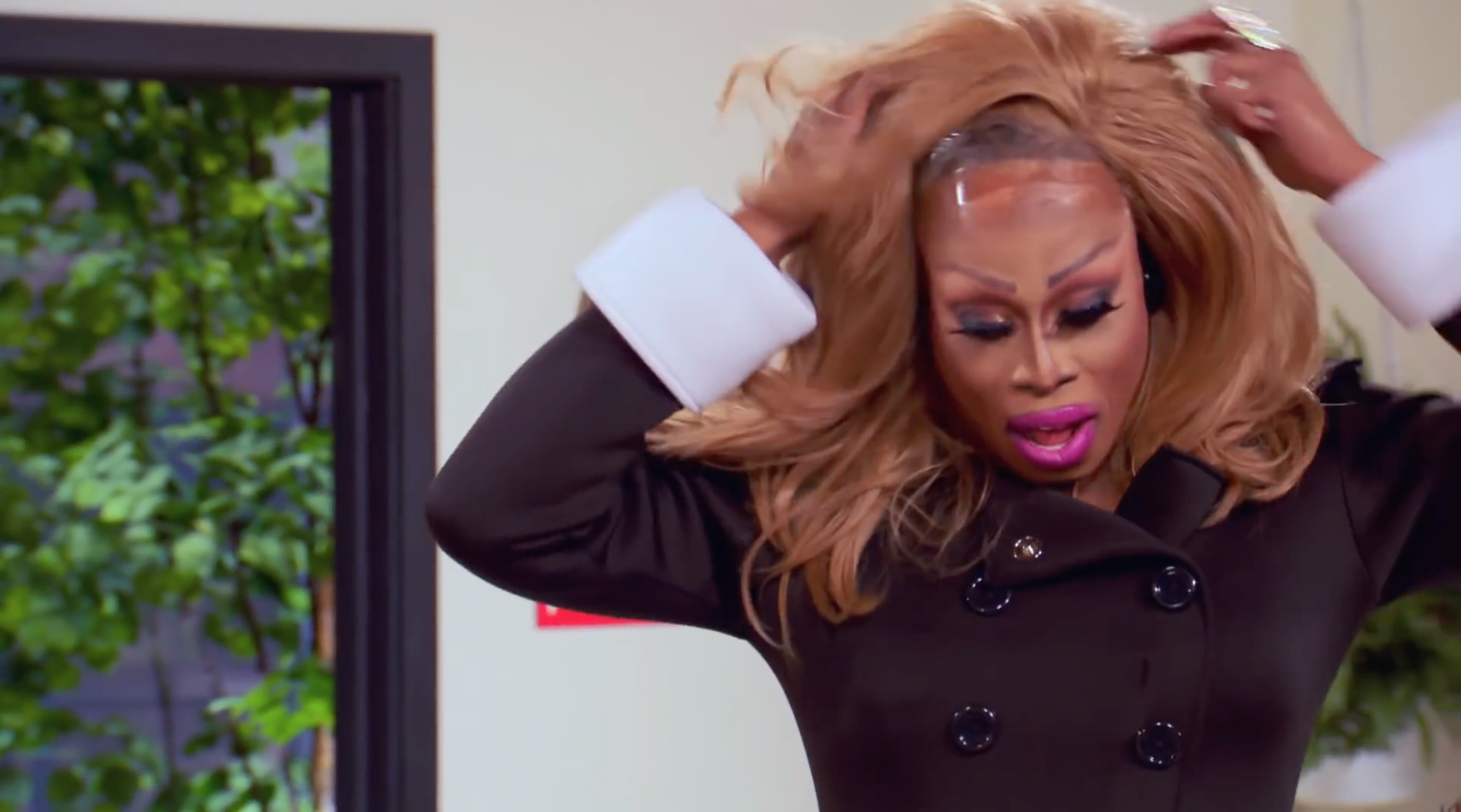 Anyway, enough about the challenge, let’s get straight onto the runway!

Pretty random, right? However, I think it’s quite a cool theme to do. If I were doing this runway look, I think I would pad myself and go as a sexy Bagpuss or I’d go as ‘Kat’ Slater in an ugly leopard print blouse and a black leather mini skirt. 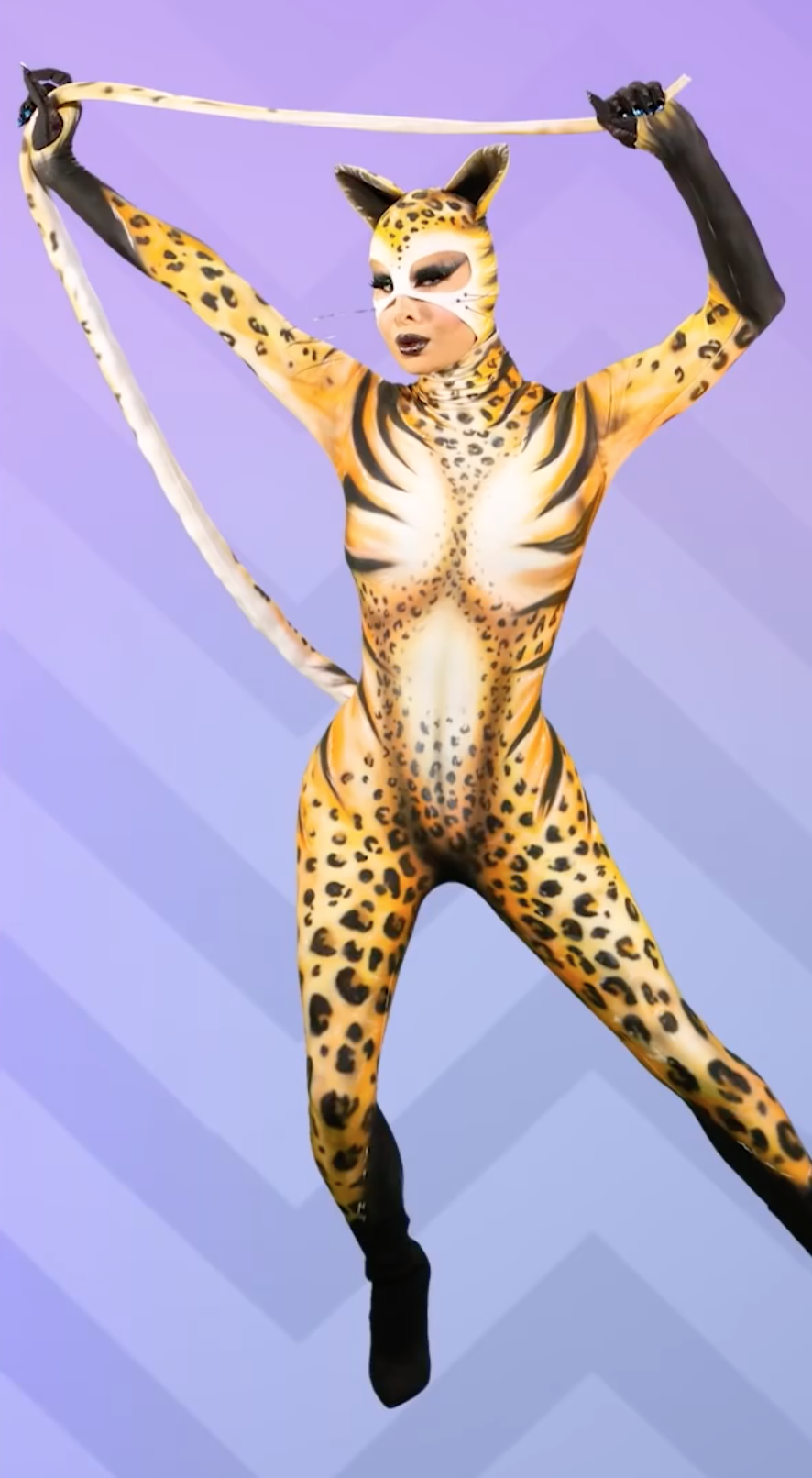 This bodysuit fits her like her own skin. It hugs her body beautifully and she looks sassy. A leopard version of the Michelle Pfeiffer ‘Catwoman’ costume. 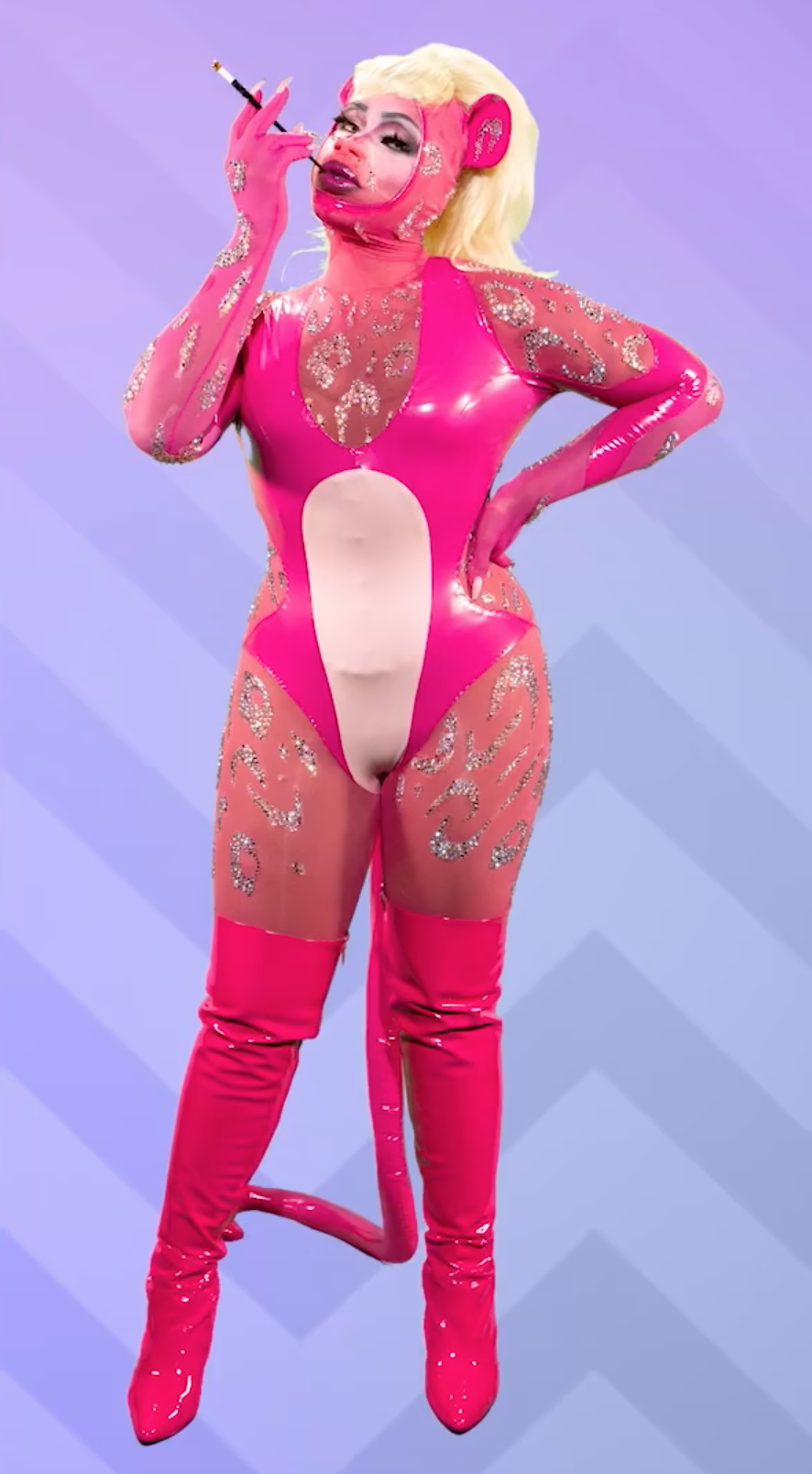 I mean, it’s the same gown she usually wears but with some African animals spraypainted onto it. She doesn’t look bad in it, it’s just not at the same level as everybody else’s. Also, an elephant and an antelope aren’t cats… 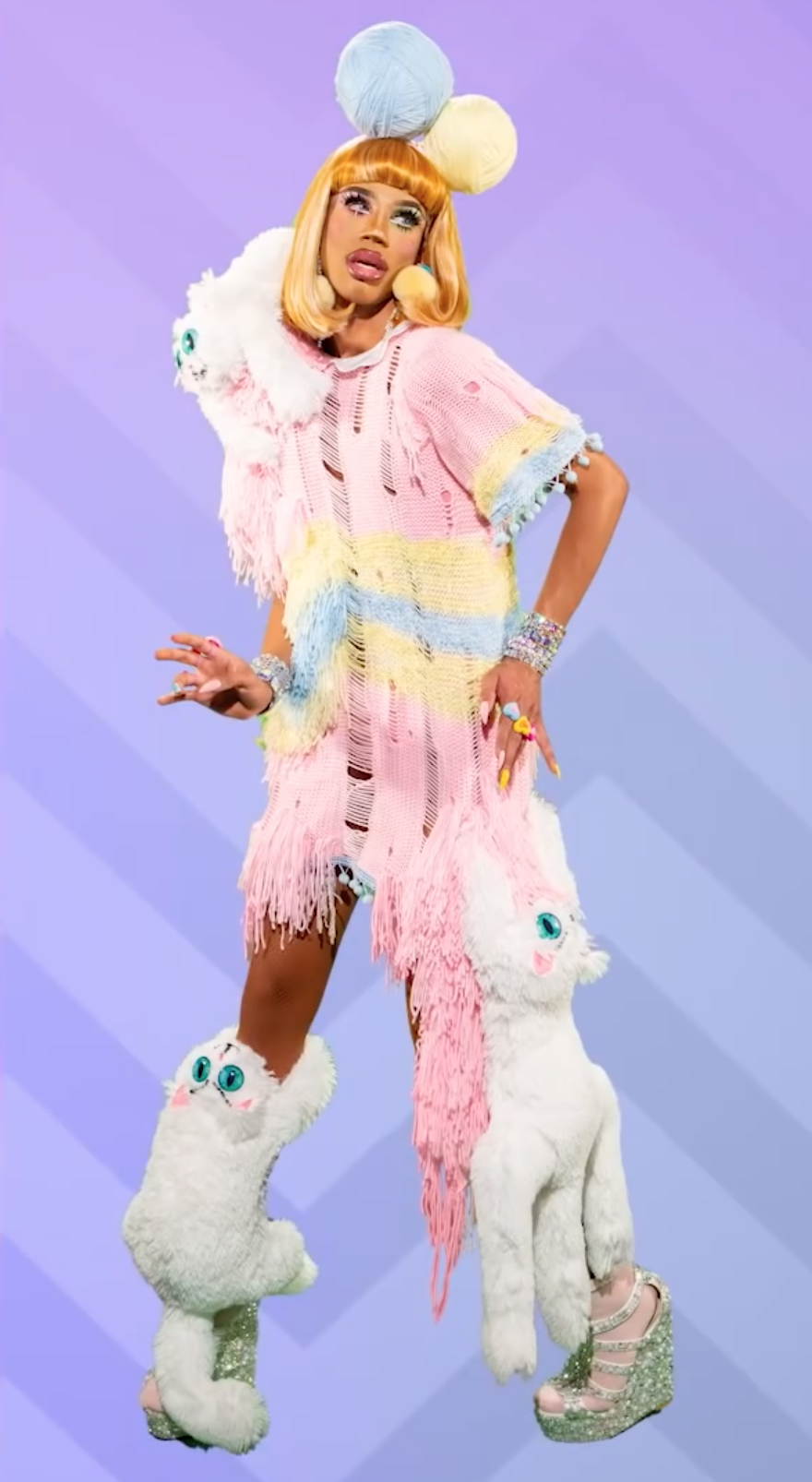 I adore this, the ‘crazy cat lady’ aesthetic was a clever take on the Cat Couture theme. I like that her dress has been snagged and torn, the yarn on the wig was a nice touch and the stuffed cats all over her outfit was a brilliant touch. This is how you make humour high fashion.

My favourite look of the night. This is such an iconic look. Puss in Boots from Shrek is one of the greatest animated film characters and Monique truly did the cat justice with her rhinestoned thigh-highs and her enormous hat – bravo.

No surprise that Monique and Trinity were the top 2 this week which left everybody else in the bottom. Though I must say, Latrice hasn’t really delivered much this season, but I actually think she did a good job as Miranda. She bared the least resemblance to the character out of everybody (because she’s a large black man, not a dainty ginger lady) but I think she actually did a relatively good job. Either way, Naomi, Monét and Latrice were the bottom 3 of the week.

I think both queens did a great job with the song but Trinity stole the show for me. However, I’m bored of Janet Jackson songs being the lipsync numbers – we’ve had a good few now. But I did actually quite like the song.

In the end, Trinity won the lipsync and gave Latrice the chop. Though Naomi’s performance wasn’t great this week and after what happened with Manila last week, Trinity has stuck to her guns and eliminated based on track record.

Though I’ve been thinking

I enjoyed this week’s challenge of a SATC acting challenge, but I can’t help but think that the challenge was designed around queens the show may have assumed would make the top 5? Is that just me? Who knows, either way it was fun.

That was a pretty intense episode, however, I genuinely am shocked that Trinity didn’t send Naomi home to make a point. However, she did say she would always eliminate the one with the weakest track record and, sadly, that was Latrice.

It’s not looking good for me at all. Last week I got 0 points and this week I got -2 points! Meanwhile, Tom is storming ahead with 8 points this week taking his total to 53 points while I am left behind with 33 points. With only Monét left in the competition, I don’t think I stand a chance of catching up on the points. 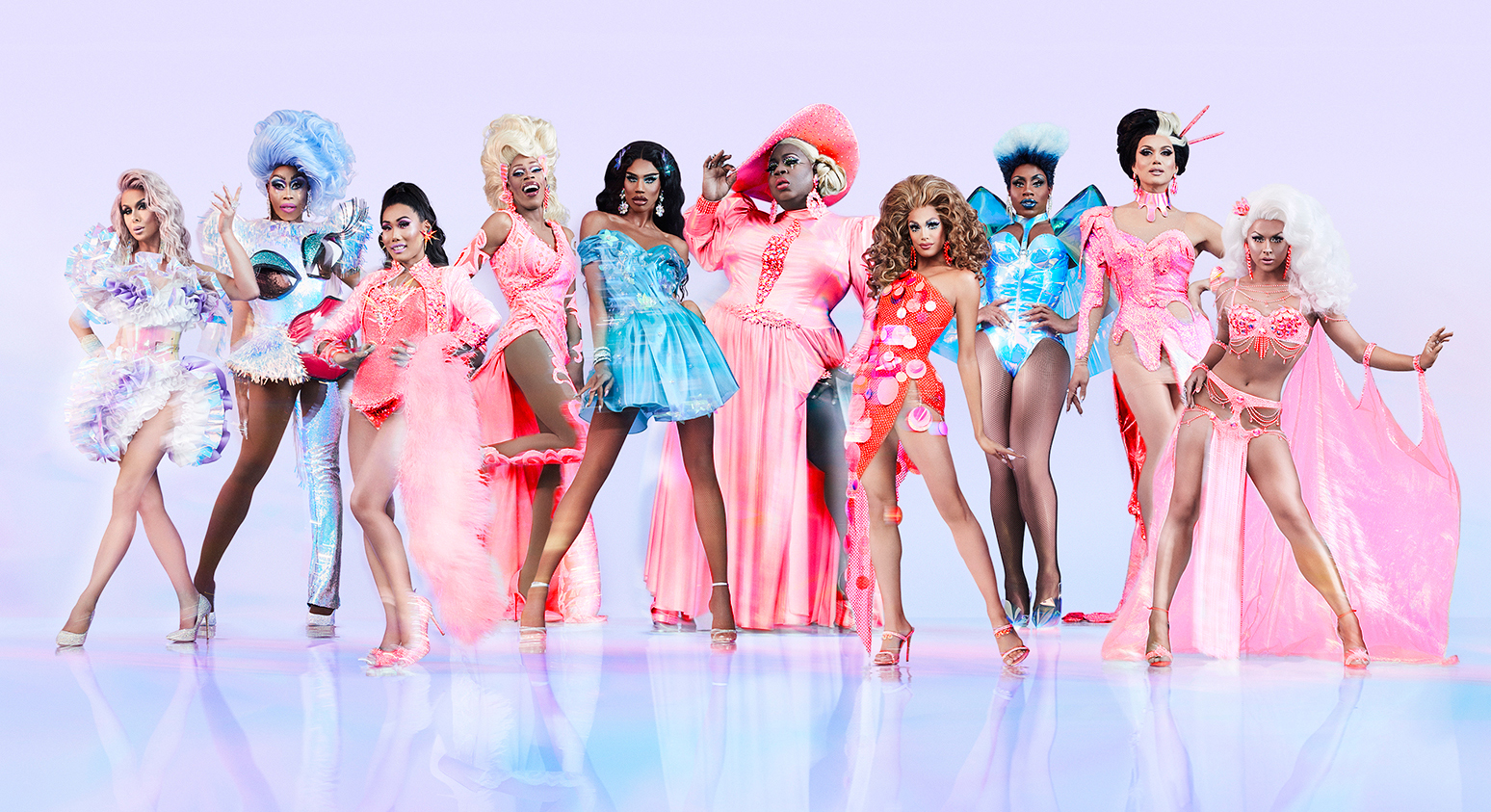 Honestly, I wouldn’t have guessed this lineup to be the top 4 for this season. I genuinely thought it would be Manila, Trinity, Valentina and either Latrice or Naomi. Hey, that’s All Stars I guess. 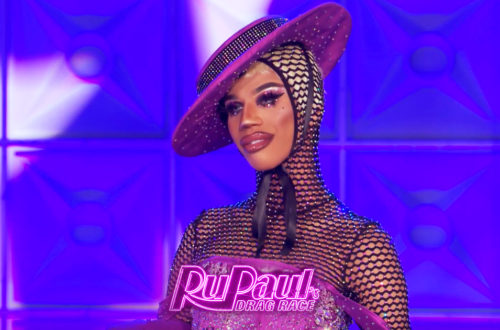 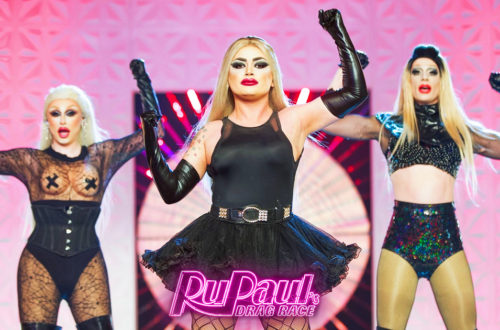 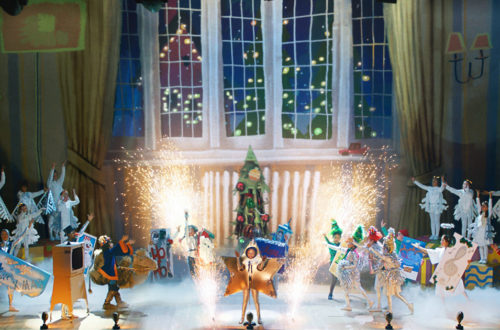