Like all seasons of Drag Race you get some great outfits and some questionable ones. But this week the queens will truly be pitted against one another to find out who wore it best.

Heaven forbid the show decides to do a mini-challenge that has any relevance to the maxi-challenge… So here’s the queen doing a limbo battle! Why? Because it wouldn’t be reality television without making the contestants look foolish.

Still, this challenge had some fun moments. We saw Ginny walk straight under the first bar.

We had Lawrence looking like Adore Delano on a comedown.

And we saw Ellie Diamond’s testicles from every angle possible. It wasn’t what we asked for, but unfortunately, it’s what we got.

The two limbo champions ended up being Veronica and Tayce this week.

The Maxi Challenge – Who Wore It Best?

But before we got into that, Ru asked the queens to find their best gal pal in the competition and pair up. I have to be honest, none of the pairings were particularly surprising.

With Tayce and Veronica winning, Ru was ready to reveal their advantage for the ‘Who Wore It Best?’ maxi challenge. The limbo champions were able to pick the coloured box they wanted first. The 5 colours up for grabs were Blue, Green, Black, Pink & Gold. 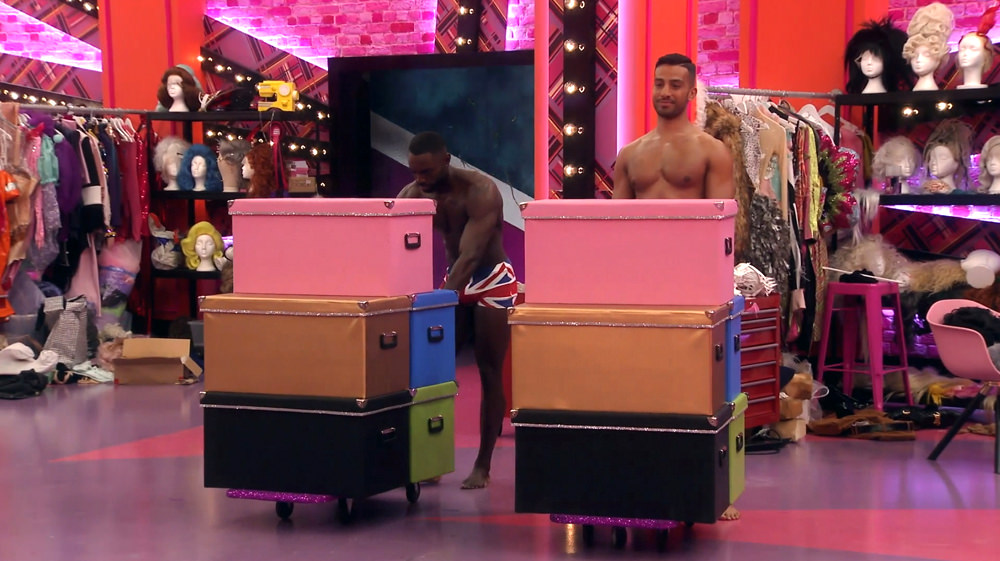 Veronica picked green which was a bold choice – we know how much Michelle loves that colour. But hey, if she was to go home, at least you’d remember her surname. It had Tia questioning her teammate. 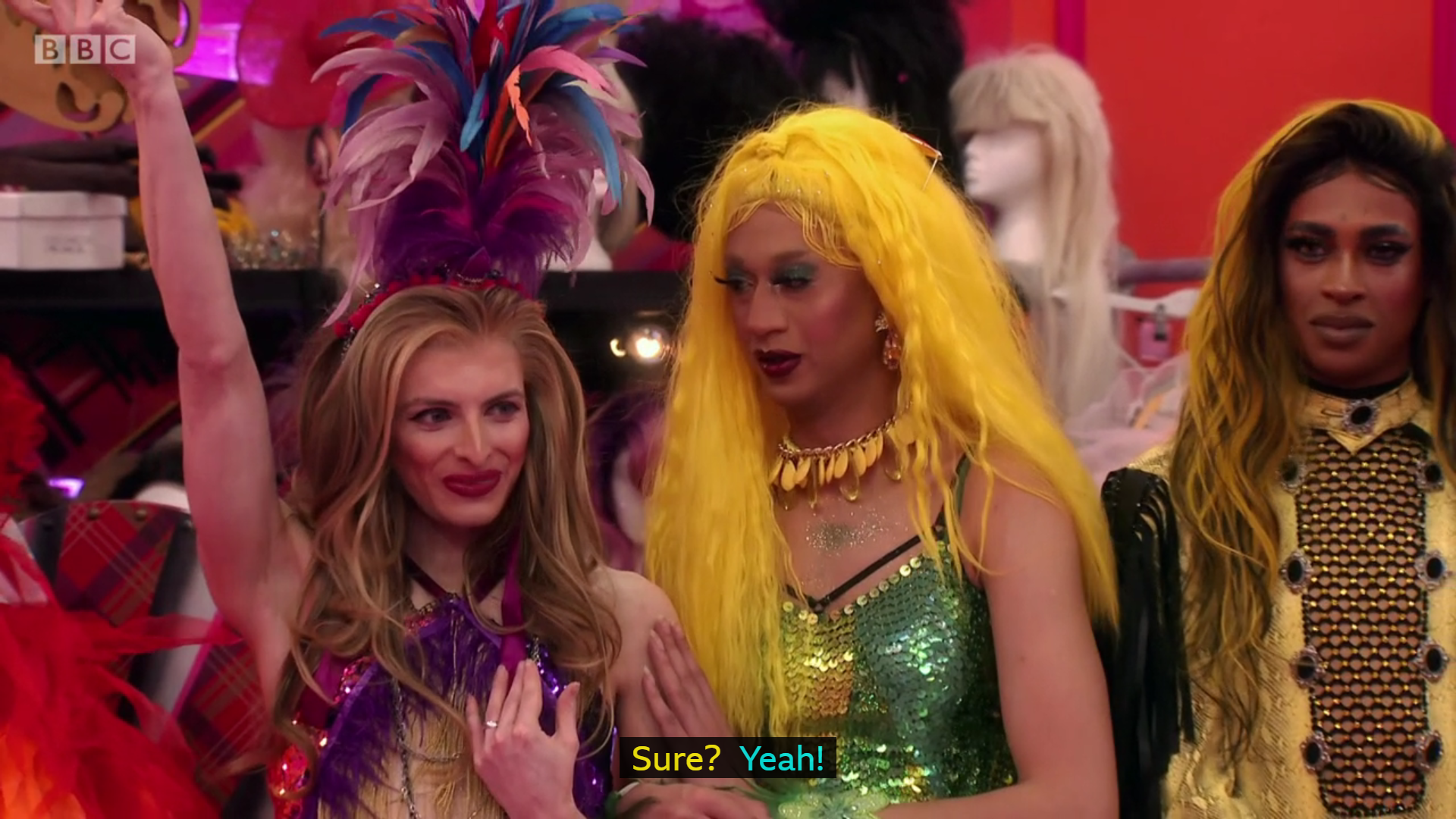 Tayce picked black – not what I would have gone for. It can be great because black can make anything look chic but it can mean you need to work harder to actually show off a design.

Personally, I would have picked gold (it will make anything look better than it actually is) or blue (it seems like a safe colour to go for).

“Hi Ginny babes, can you be literally everything you represent by wearing a pair of rubber tits this week? Ta dallyn” – RuPaul

It was only a matter of time before Ru does the classic “show us vulnerability by doing something that isn’t you” moment on the show. It came in the forms of Ginny Lemon being told that she needs to be sexy. 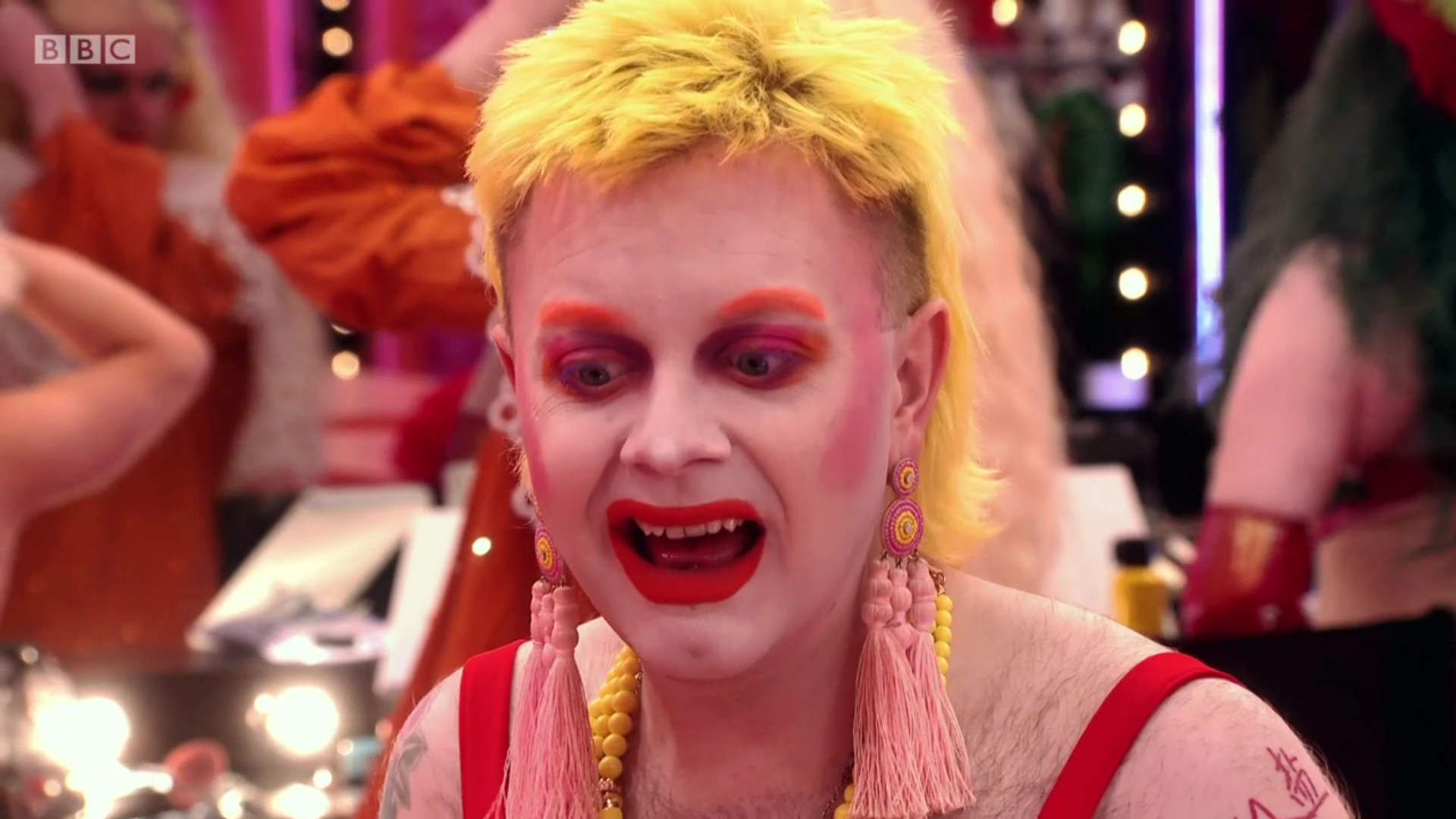 Props to Ginny as she opened up saying that she’s never felt sexy and has never even contemplated being sexy in her drag persona. Ginny is Ginny and what that is is an absolute living legend!

Still, it was an emotional moment where we got to see Ginny share her thoughts and a part of her past before bravely taking the challenge. Her rival/teammate, Sister, helped her out by loaning her a breastplate, getting her padded and corseted. 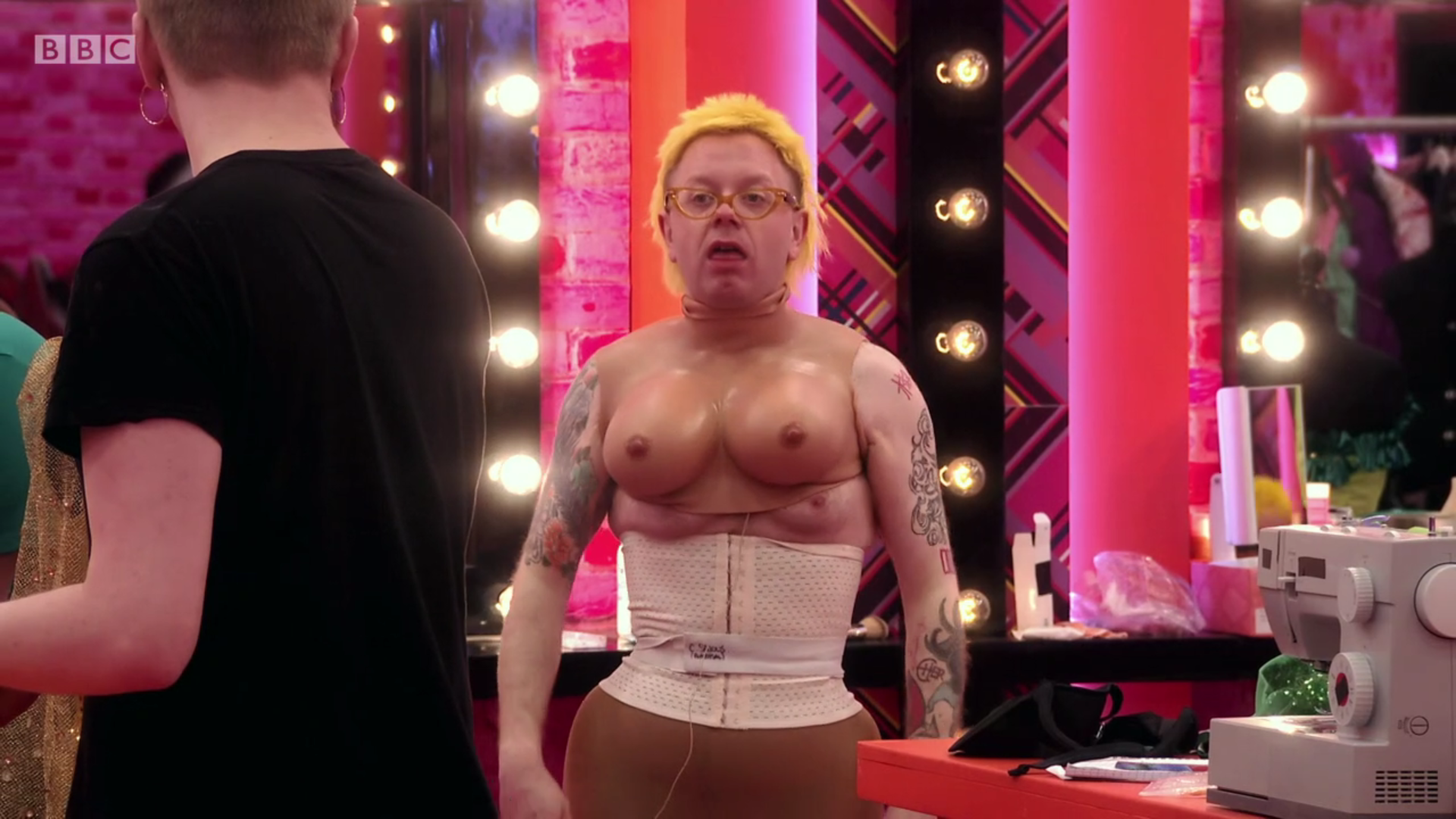 But it was quite the episode for Ginny as we learnt even more about her life. Sister was chatting to Ginny about her self identity and Ginny opened up about being non-binary and that’s why she uses the colour yellow throughout her drag as its a colour that can’t be gender-defined. 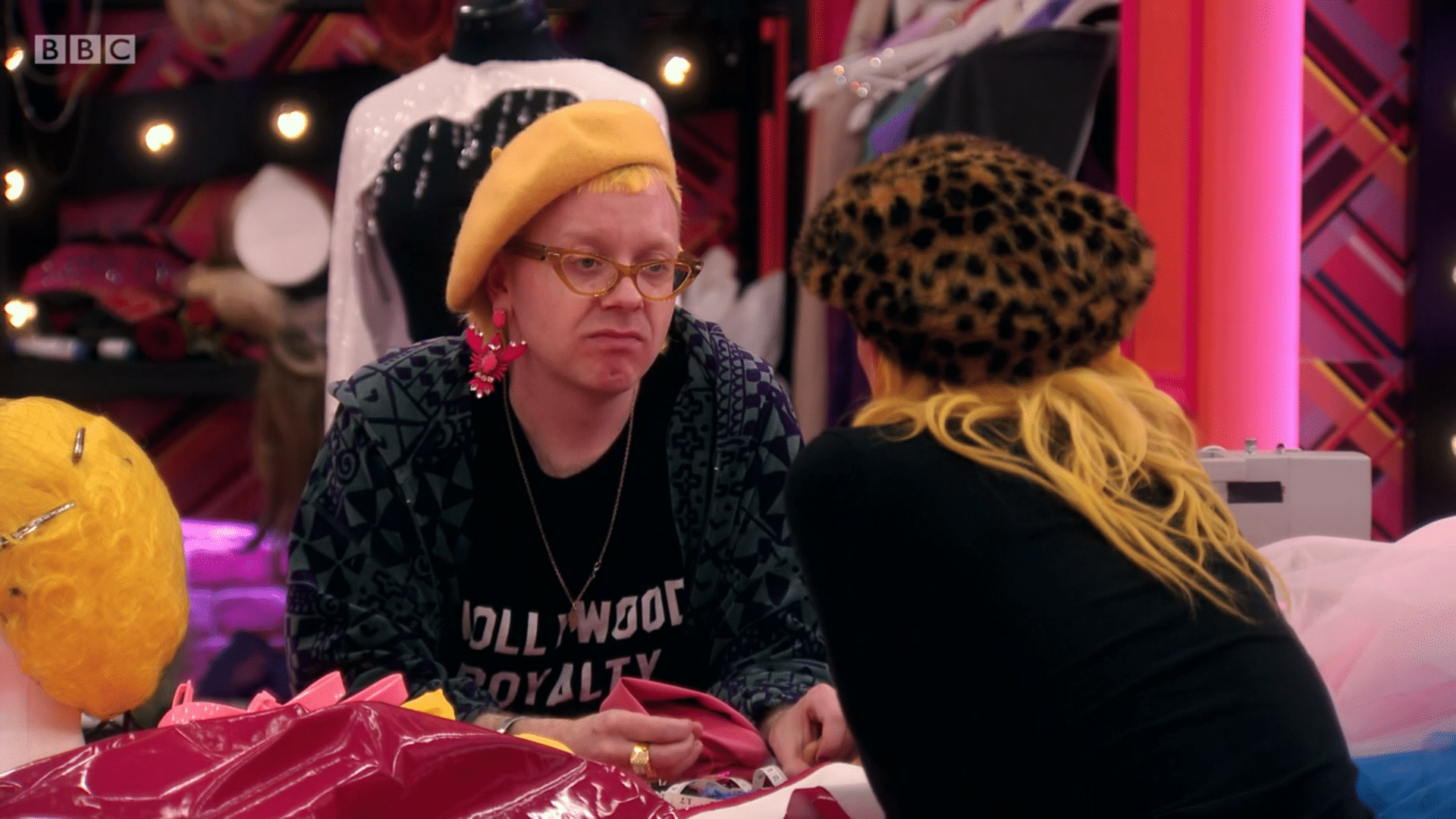 This led us into a heartwarming chat between both Ginny and Bimini about being non-binary (and also having yellow mullets which is merely a coincidence and not a requirement for being non-binary).

With some help from Lawrence, we also delved into the past relationships of Tayce and A’Whora’s “sexual tension”. Yes, last week we found out that these two queens have bumped nasties and Lawrence wanted to help bring that story to light. 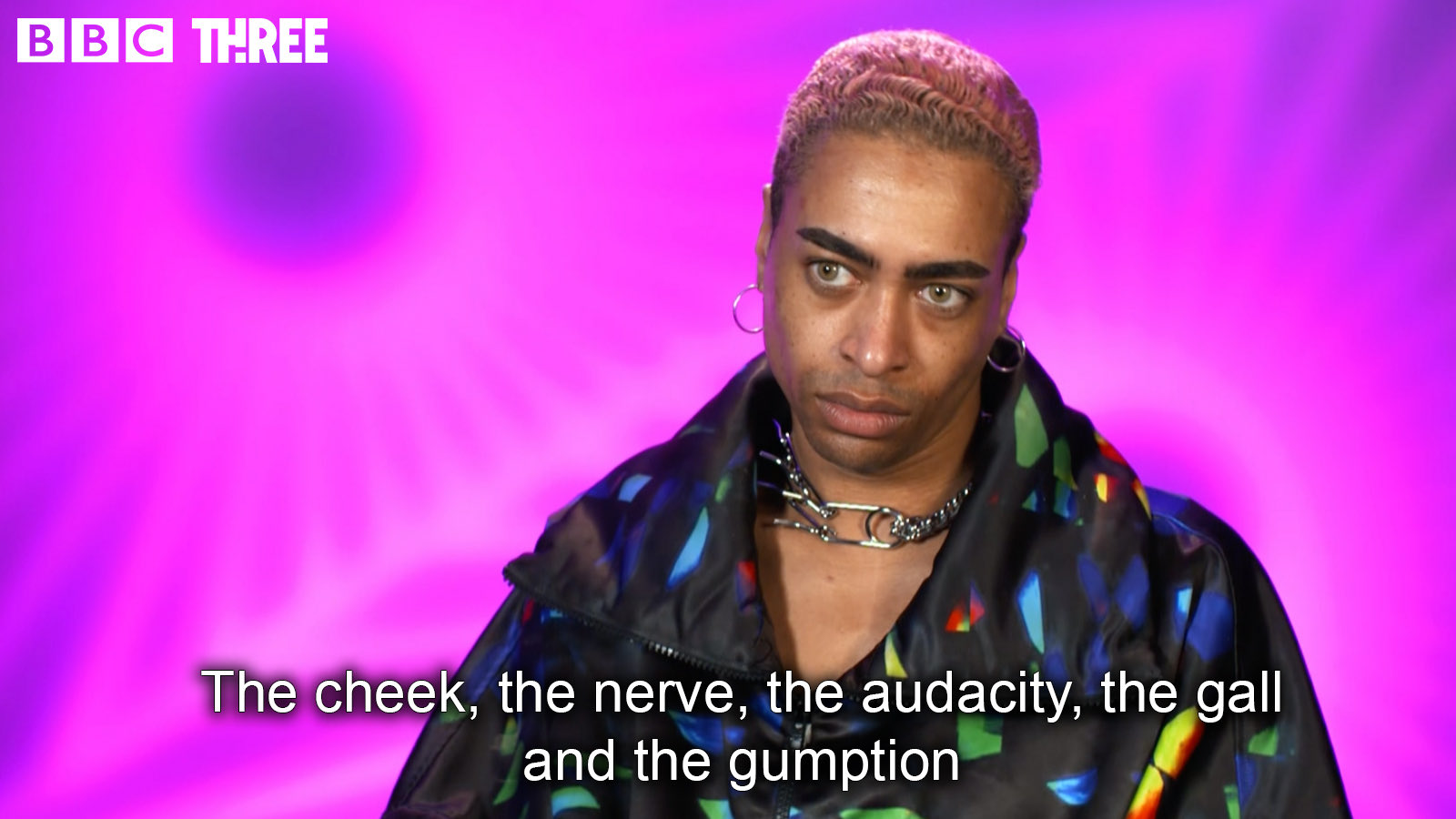 I’m sure we’ll see more of this narrative unfolding throughout the competition. Speaking of competitions, let me get back to it and on to the runway!

Category Is: Who Wore It Best? – Toot or Boot

I thought I’d give my thoughts on whether or not I thought the judges made the right decision or not. Of course, I’ll also be giving my honest opinions on the outfits in general.

BLACK BOX. Who Wore It Best? A’Whora
Did I agree? Yes, but only just 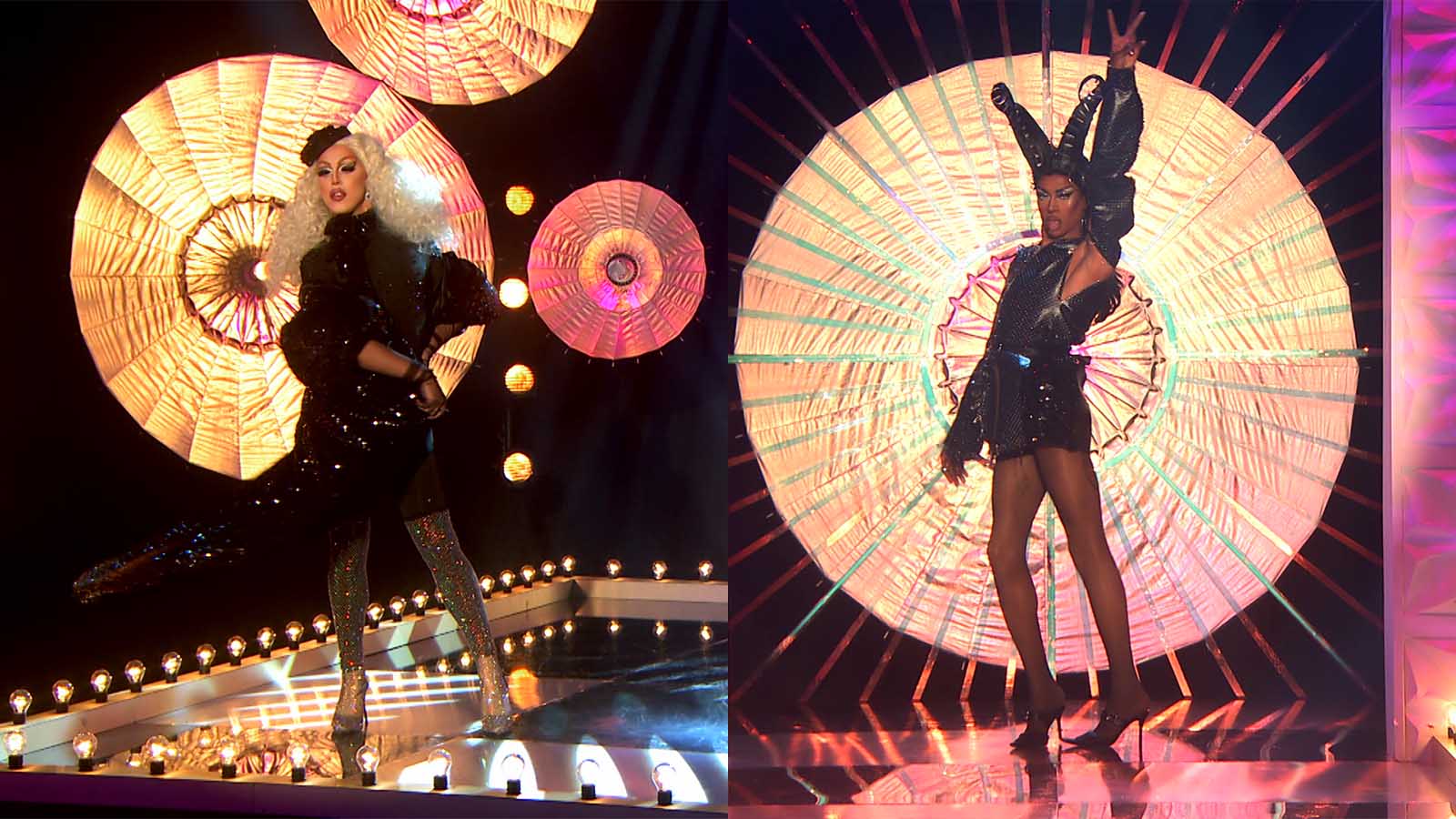 I thought A’Whora looked great this week but she definitely managed to make herself appear older based on the way she styled her outfit (which isn’t necessarily a bad thing). I liked the hat and the wig although it did hold a striking resemblance to Sharon Needles’ poodle look at the Bitch Ball back in season 4.

Still, I thought A’Whora looked lovely and my only critique was the bedazzled leg-warmers which I was not a fan of. I get she wanted to add a little something extra to the look but I was not a fan – it took away from the beauty and simplicity of her overall attire.

A’Whora may have only just got a toot, but Tayce only just got a boot – they were pretty evenly matched. What I hated about Tayce’s look was that she wore the same horned wig from episode 1. Don’t get me wrong, A’Keria Davenport wore a big blonde wig over and over and over. But when a wig is a sculpture, it’s hard not to notice that it’s the same. For this reason, I booted (that and the jacket was a bit ‘meh’ but well-styled).

PINK BOX. Who Wore It Best? Sister Sister
Did I agree? Yes 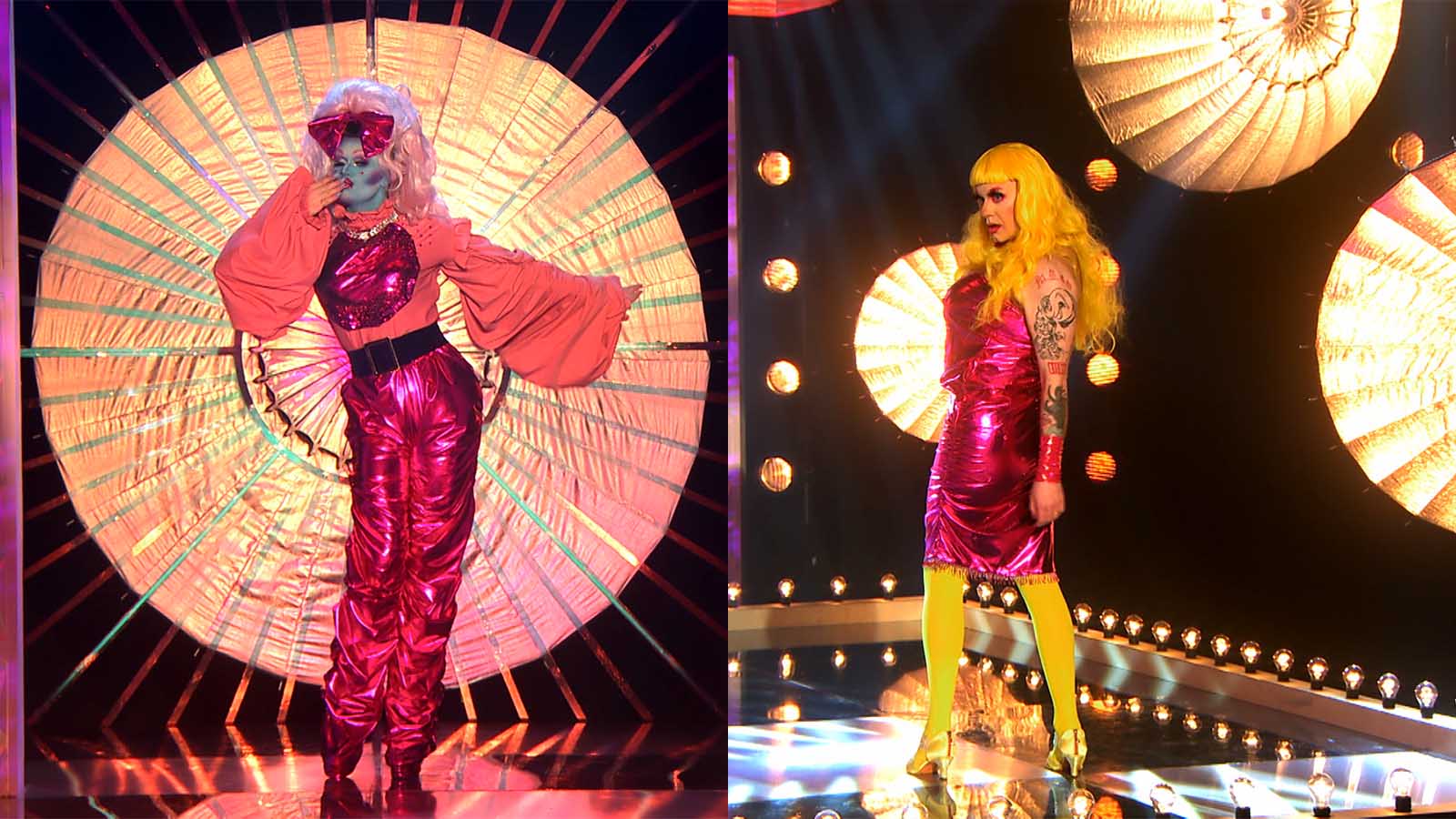 I actually loved what Sister created. I thought the ruched pants were very clever and fashion-forward as they went into the boots. The billowing sleeves of the top was lush and I actually liked her blue alien makeup. I think Sister Sister delivered a great fashionable look. Bravo!

I will commend Ginny for trying to be sexier with the hips and tits. The dress, however, is quite awful. It was very simplistic and a belt of some sort would have helped accentuate the curves she added. I enjoyed her choice of wig and the softer makeup and the pops of yellow stayed true to Ginny which I loved but yeah, the outfit wasn’t spectacular but props to her for giving RuPaul’s challenge ago.

GREEN BOX. Who Wore It Best? Veronica Green
Did I agree? Yes 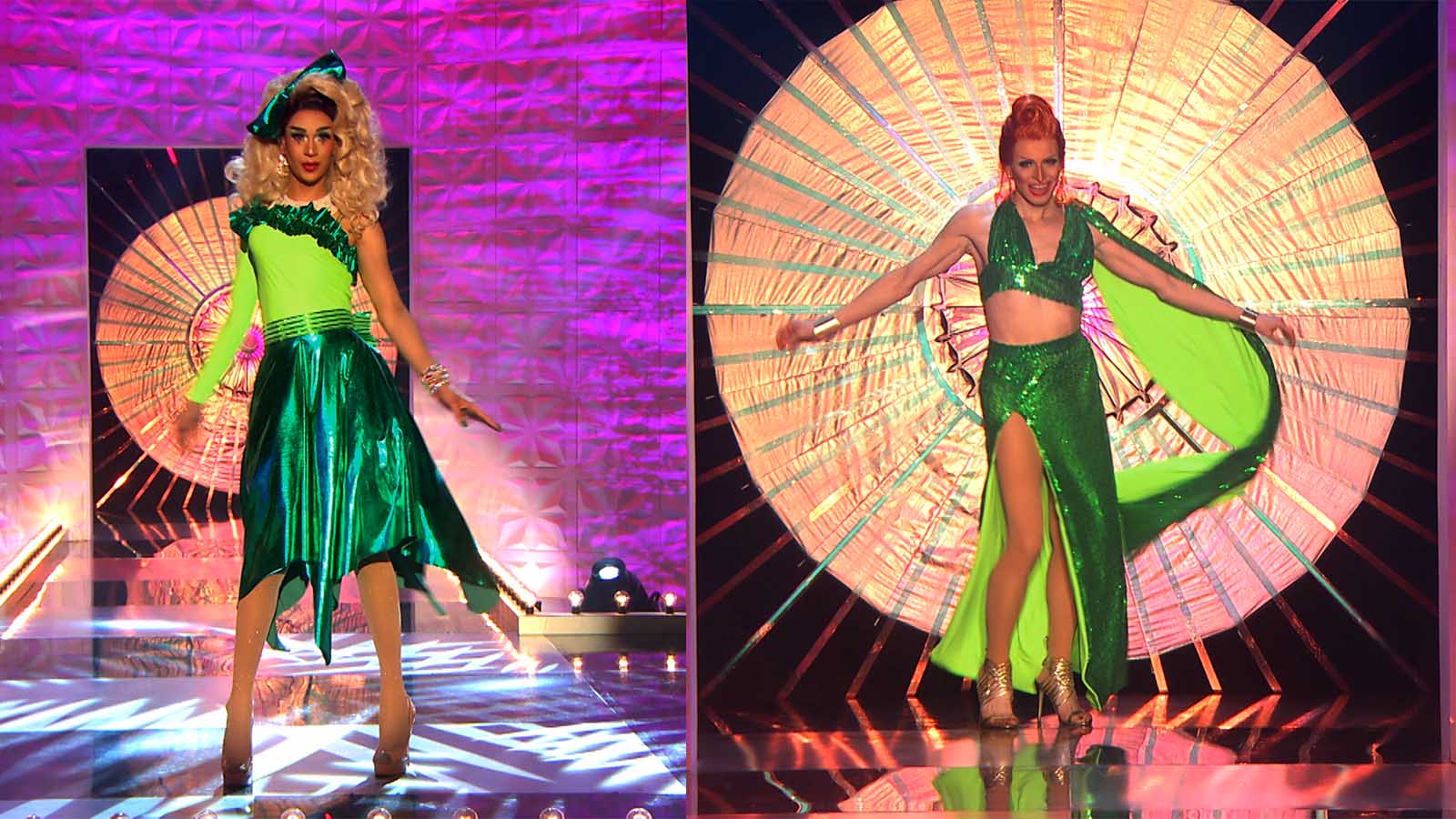 This was… not good. Not the most tragic thing to ever walk down the runway… but not good.

The look wasn’t bad, but it wasn’t good enough to warrant a toot. The actual creation was tidy, she lined her skirt and the cape wing thing but it just wasn’t groundbreaking. I wish she had some big accessories to jazz the outfit up.

BLUE BOX. Who Wore It Best? Bimini Bon-Boulash
Did I agree? Yes 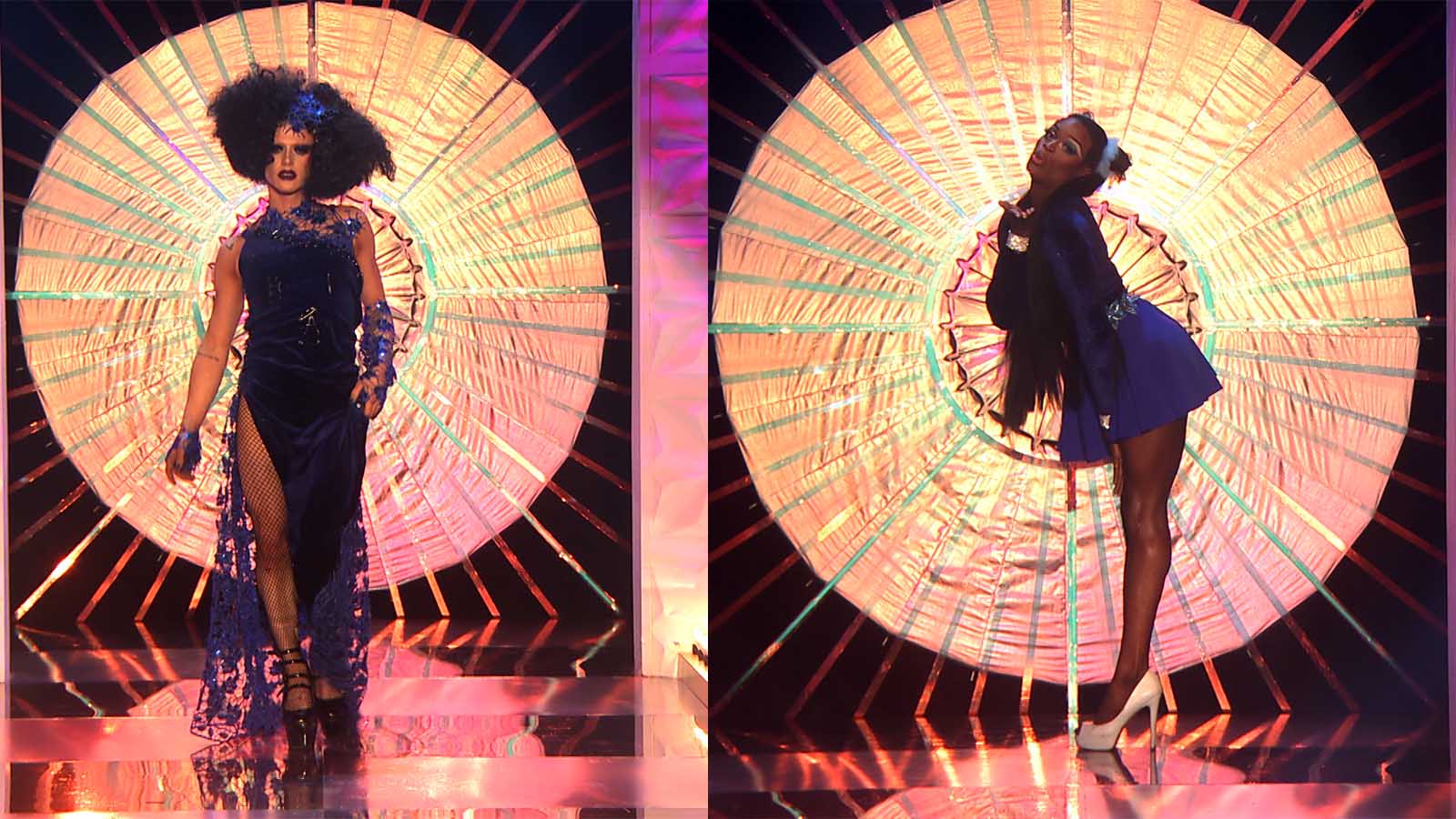 This queen absolutely smashed this challenge. She looked vampy, sexy, high-fashion and expensive. Was it the best piece of fashion construction ever? No. Did she sell it? Abso-fucking-lutely. Bimini’s look was my absolute favourite this week.

The definition of mediocrity. It was a top and a skirt. She seemed shocked that the judges thought it looked like an ice skating outfit and if she was Nancy Kerrigan she would have had her kneecaps smashed. It was just incredibly plain and I think she put the majority of her effort into painting on edges and adding two long wefts of hair to some scrunchies.

GOLD BOX. Who Wore It Best? Lawrence Chaney
Did I agree? Yes (but it was a close-ish call)

Lawrence certainly knows how to dress for her body. The dress looked expensive and sassy (but also a little dated). I wasn’t blown away by the design but it was definitely the strongest piece of construction on the runway.

Lawrence ended up winning. Fine, I guess, but I would have had Bimini win – it was a more exciting overall look. Even Sister Sister had a great look with interesting construction. Still, Lawrence got another badge edging him closer to victory. 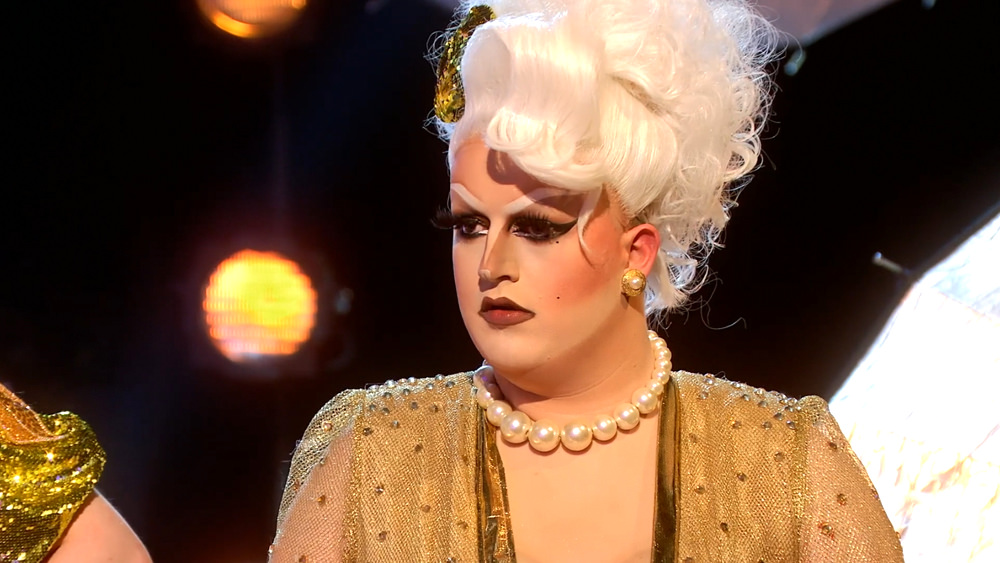 The bottom 3 were Tia, Ginny and Asttina – Quelle surprise for all three queens. I have to admit, when I heard this lineup, I thought they were going to put Ginny in the bottom with Tia even though she went out of her comfort zone. I have to say, I was quite glad that wasn’t the case.

It was Tia and Asttina who were facing off and at this point, I’m sure everybody thought it was Tia’s time to sashay away…

Okay, so Tia smashed this lipsync. Considering Asttina hyped herself so much as a lipsync assassin, it was awkward to see her perform a mediocre performance. Nothing she did was particularly groundbreaking, it was just a dance to a song. Tia really pulled it out of the bag this week so bravo to her.

We lost Asttina, but hey ho. Another week and more surprises for the rest of the queens!