What a bloody good first episode! RuPaul’s Drag Race UK has certainly made it’s mark already in just one episode and this week was no different. I genuinely think the UK season may be my favourite season for quite some time now (and you have me on record saying that). We’re already forming opinions, choosing favourites and getting a whole heap of laughs just from the use of the words ‘tuppence’ alone. 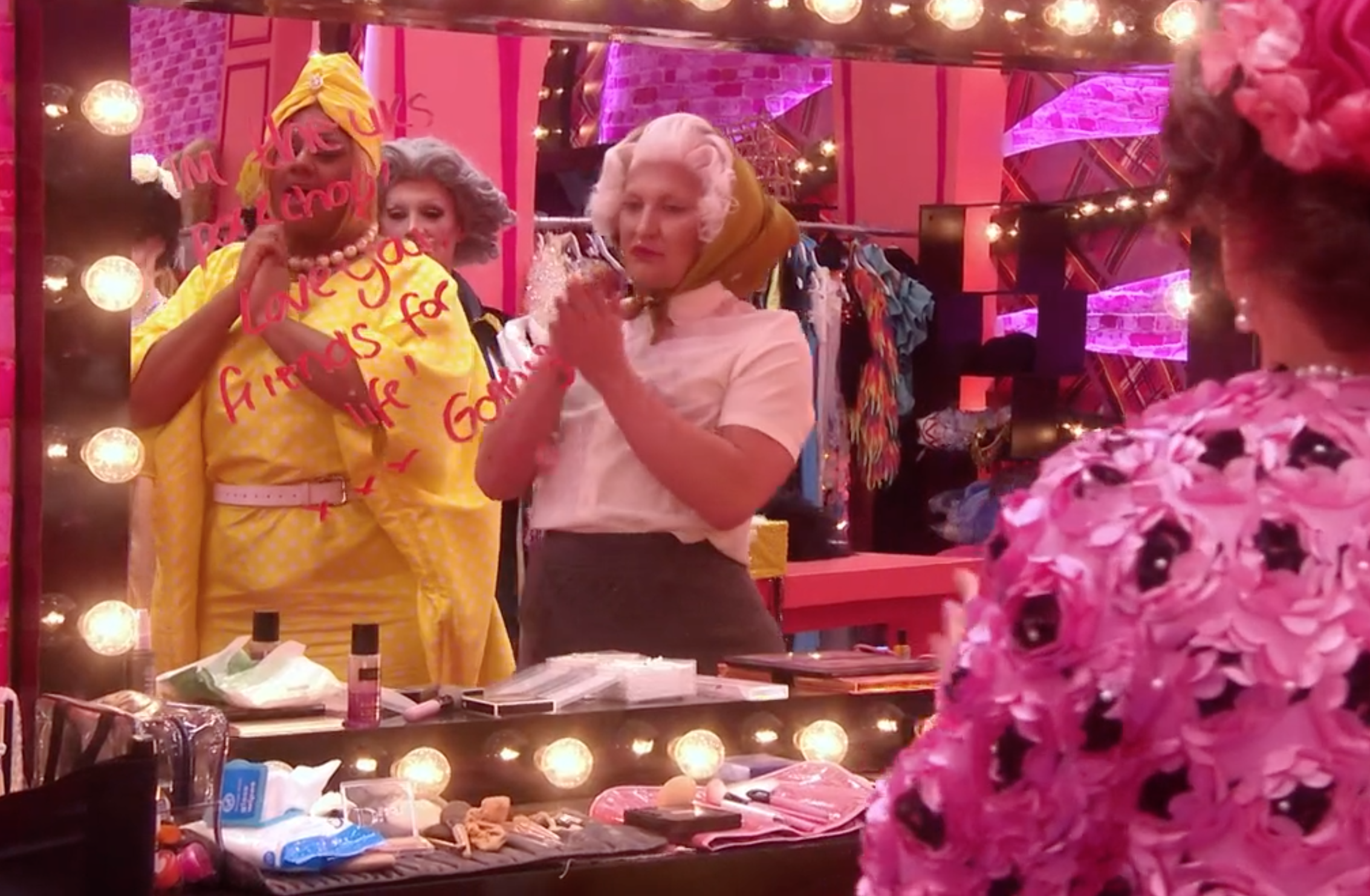 This week we also got our first lipstick mirror message and Gothy knew how to leave an impression:

But Gothy’s corpse was still warm when Cheryl decided to tell the werkroom about how she’s here to slay and how it’s lit a fire up her arse and all those reality competition cliche phrases.

And it seems to be rubbing some of the queens up the wrong way, specifically The Vivienne.

This week, Ru decided to throw in another little British gimmick. This time, she was talking about how much Brits love ‘queueing’ and to be fair, we did invent the queue system and it’s one that bloody works! 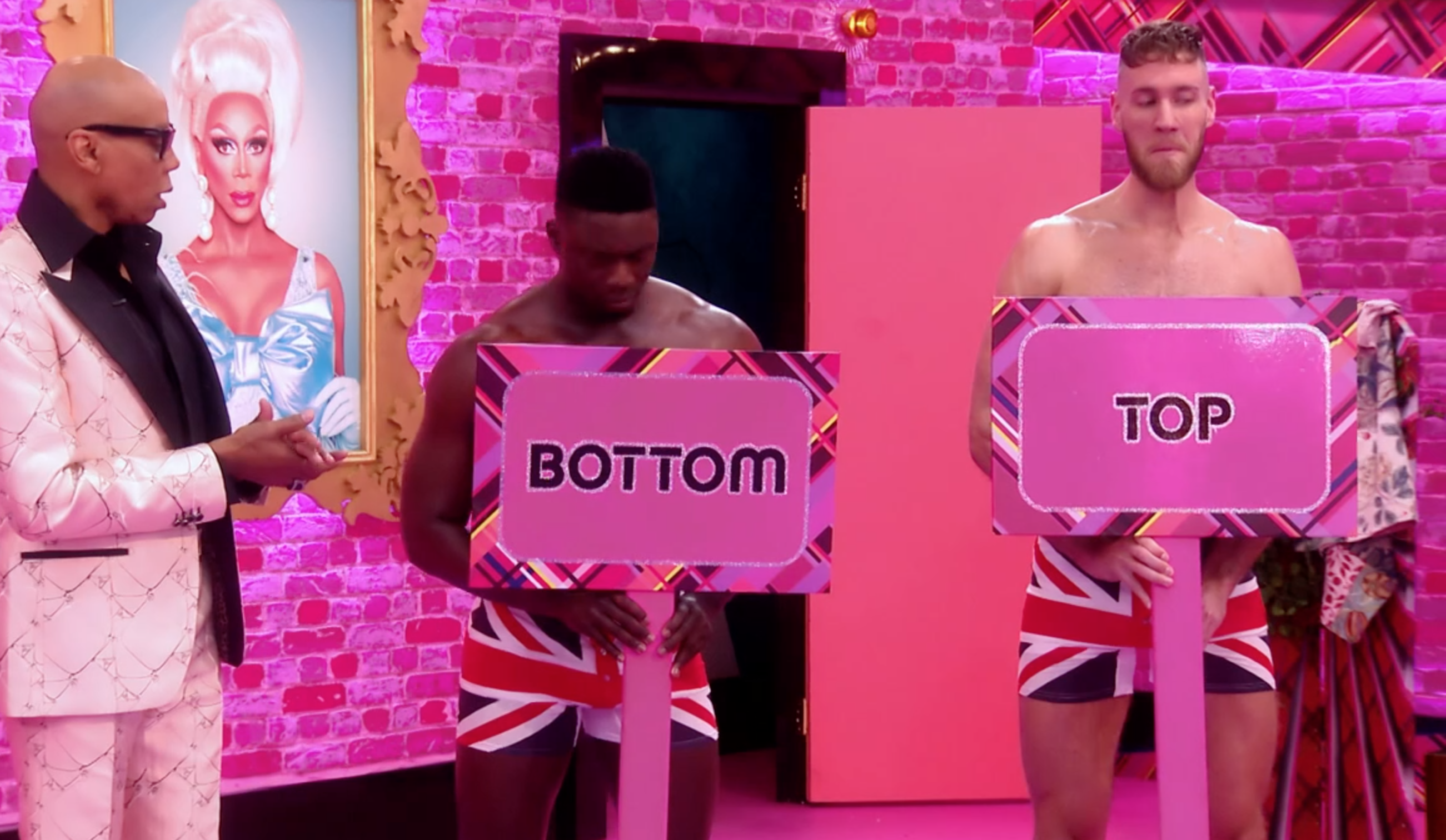 As the winner of last week’s Maxi Challenge, The Vivienne had to put the queens in order from ‘Top’ to ‘Bottom’ (see what they did there?) of who she see’s as her biggest competition. My word she put Cheryl in her place.

She put her 2nd from the bottom, not necessarily because she wasn’t a threat, but because she wanted to bring her down a peg or two. She also put Scaredy Kat at the bottom which honestly wasn’t a shock. Scaredy has already admitted that she’s been doing drag for a minute, never been to a drag show and never performed… makes sense really. 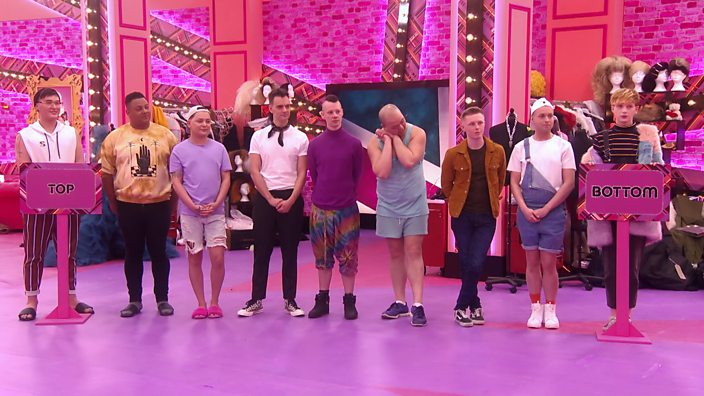 But how is this a challenge? Well it wasn’t really, but it was a bloody great plot twist! As the ‘weakest’ competition, Scaredy Kat would be a team captain this week against The Vivienne. 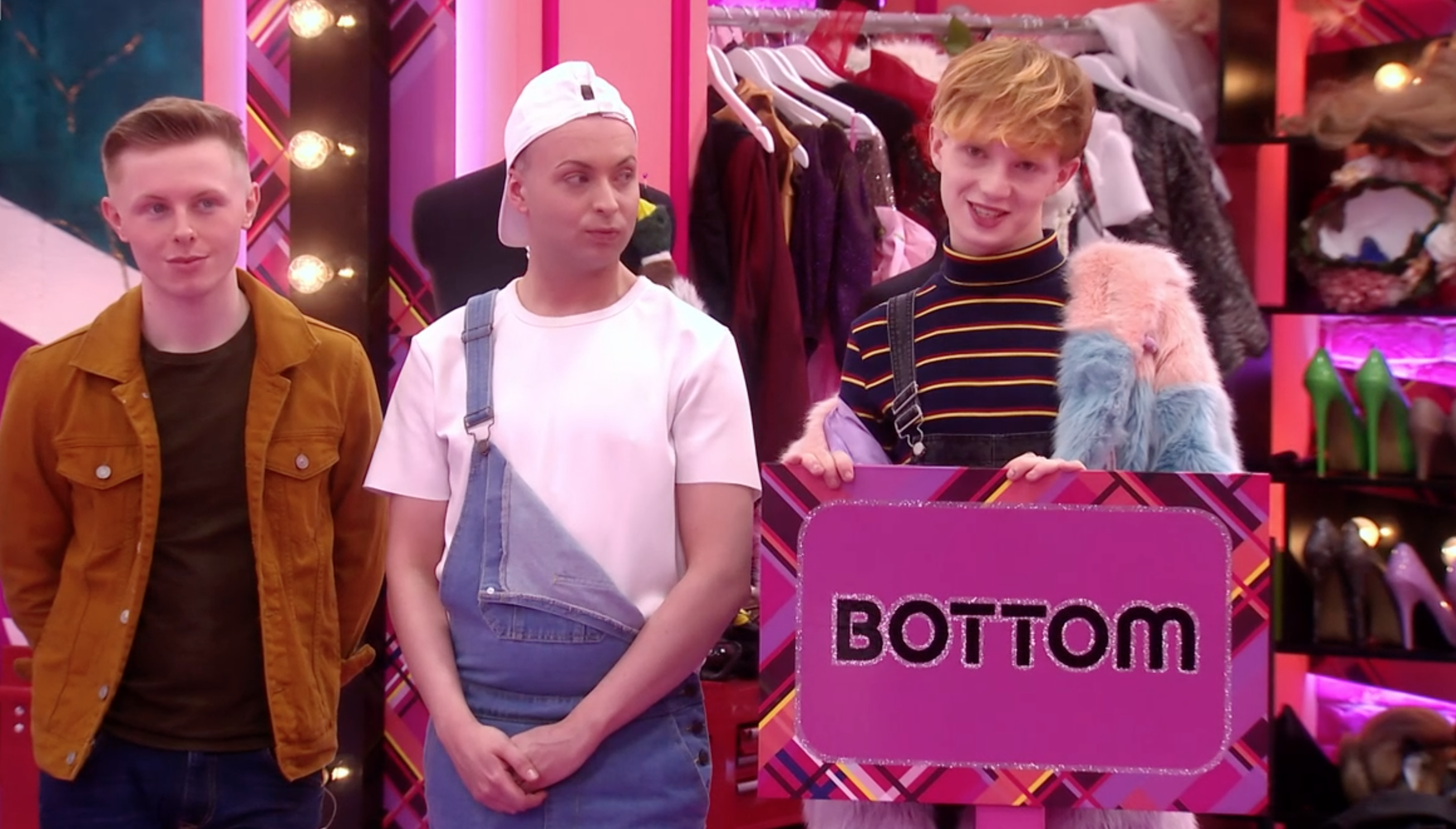 This week the queens were competiting in an acting challenge and as the underdog, Scaredy Kat got to choose her team mate first and then the pair alternated.

Divina was FUMING to be on Scaredy’s team and I honestly could not blame her, I’d feel like I was on the sinking ship too.

This week the queens would be performing in the hit new series ‘Downton Draggy’. The British themed challenges are in abundance this year and I’m living for it.

Overall, these girls seemed pretty good in the rehearsals. The Vivienne played the Maggie Smith role brilliantly. The look, the accent and the mannerisms were spot on. In the same scene, Vinegar seemed to be overshadowed. Then when it came to the second scene, Sum Ting Wong seemed a bit flat as her Mariah Carey character.

But by far, the scene stealer had to be Baga Chipz as Becky. I have never and I mean NEVER cried with laughter as much as I have during an acting challenge. The accent was insane, the makeup was vile and the mannerisms were that of a demented old dinnerlady.

When she missed her line and had her little interaction with Michelle, I howled. But when she finally delivered the now iconic “Much Better!” line, I literally cried so hard. 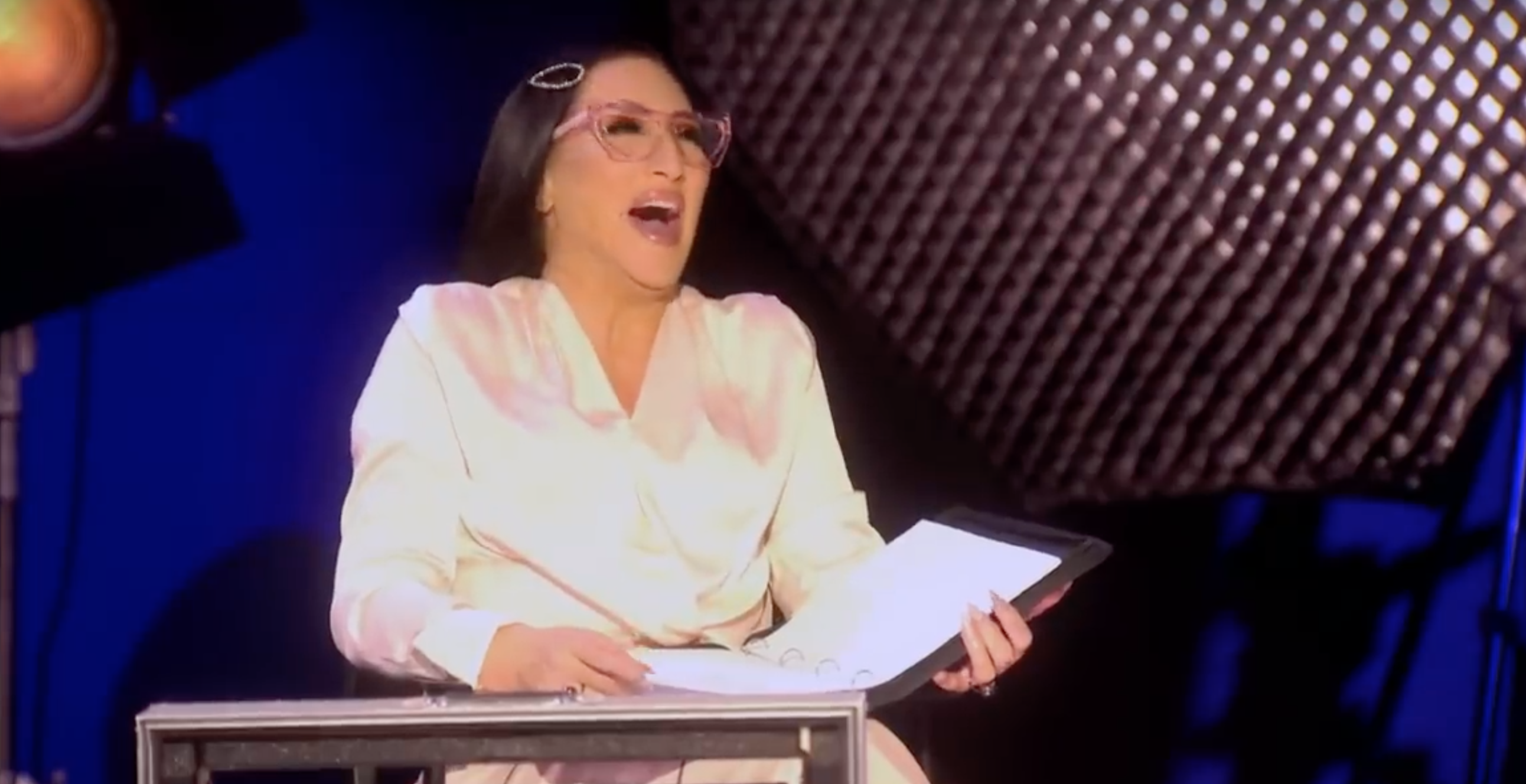 It wasn’t just me who loved it either, Michelle was howling, all my friends were in tears and the bar I watched the screening at was cheering so loudly. You Go Glen Coco!

She was truly spectacular this week, Baga Chipz, you’re an absolute scream! 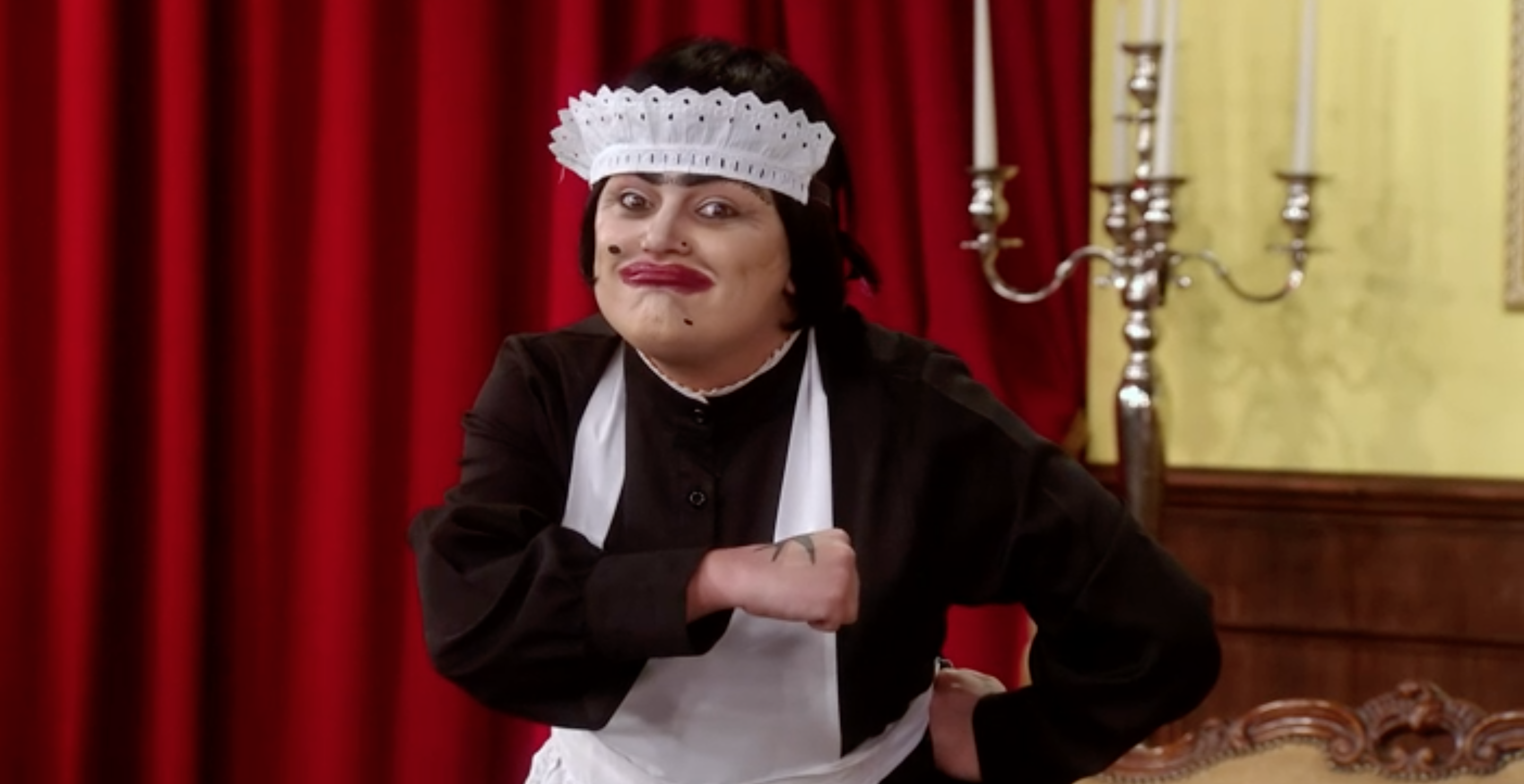 I think it’s fair to say, without even seeing the other team perform, these guys absolutely nailed it!

Cheryl Hole was kind of underwhelming in her scene and Blu Hydrangea’s accent sounded a lot like The Head from Art Attack – a nice little niche reference for all you British viewers.

The accent was funny but my word did Blu struggle to remember the words which made it quite painful to watch. Crystal also was a little flat during the rehearsal but then we had Divina who shone bright like a diamond thanks to her mucky old Yorkshire gal of a character.

But the standout in this team was Scaredy Kat… and not in a good way. If you thought Farrah Moanh had a whiney voice… Scaredy Kat has just knocked it out of the park in terms of irritating moans and groans.

I would have slapped her too based on that performance. It was so flat and bland to watch, in fact, it was really irritating. Christ on a bike hun, switch it up a bit! 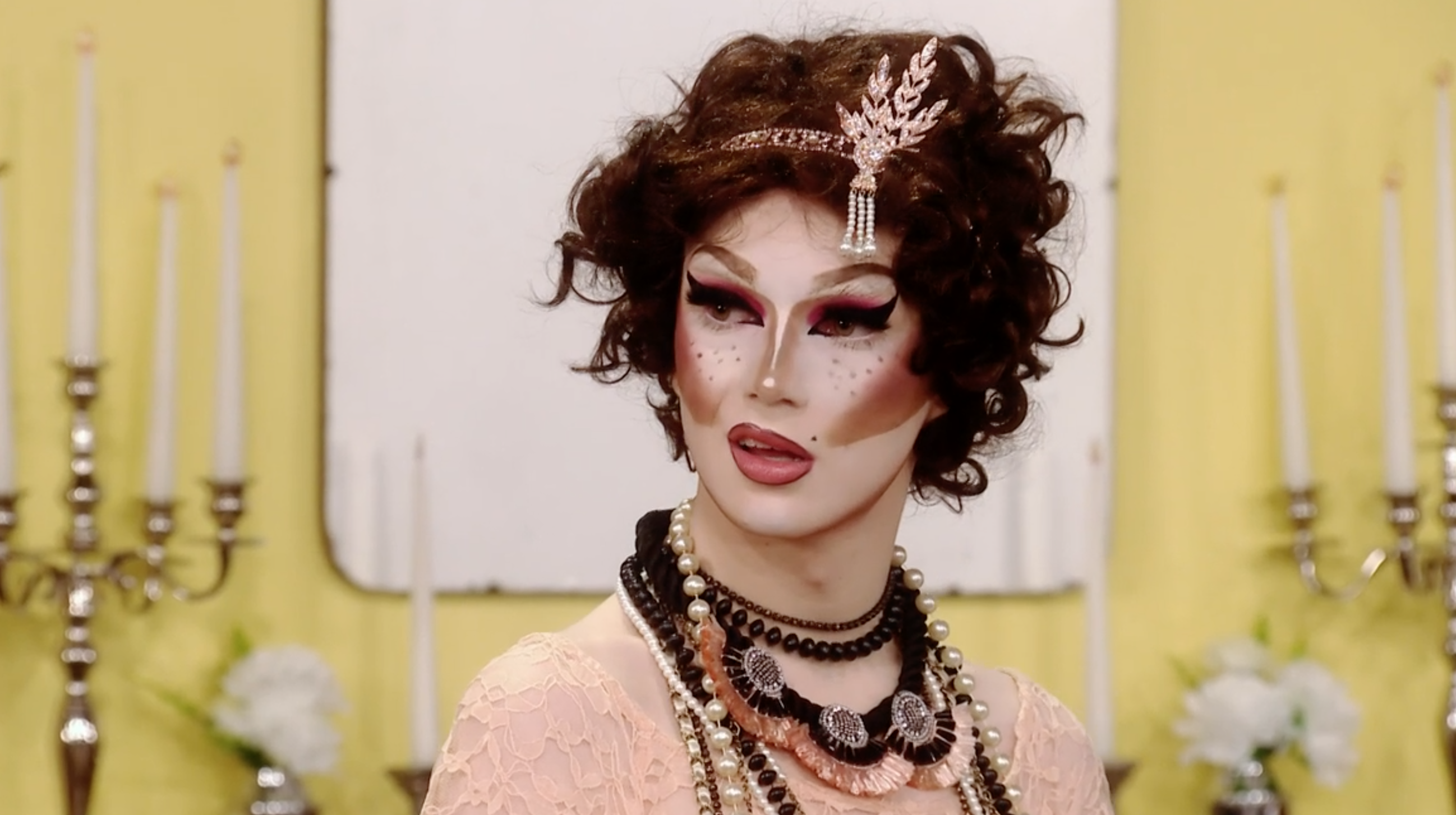 Even her teammates felt a little awkward watching Scaredy claw her way through through the script.

Is there trouble in paradise?

It would seem that Cheryl is really starting to get up The Vivienne’s tuppence. After saying Blu was a nervous wreck, R’Viv couldn’t help but roll her eyes and tell Cheryl that she was a bit of a bitch. Are we potentially seeing are first Drag Race UK rivalry? I bloody hope so! 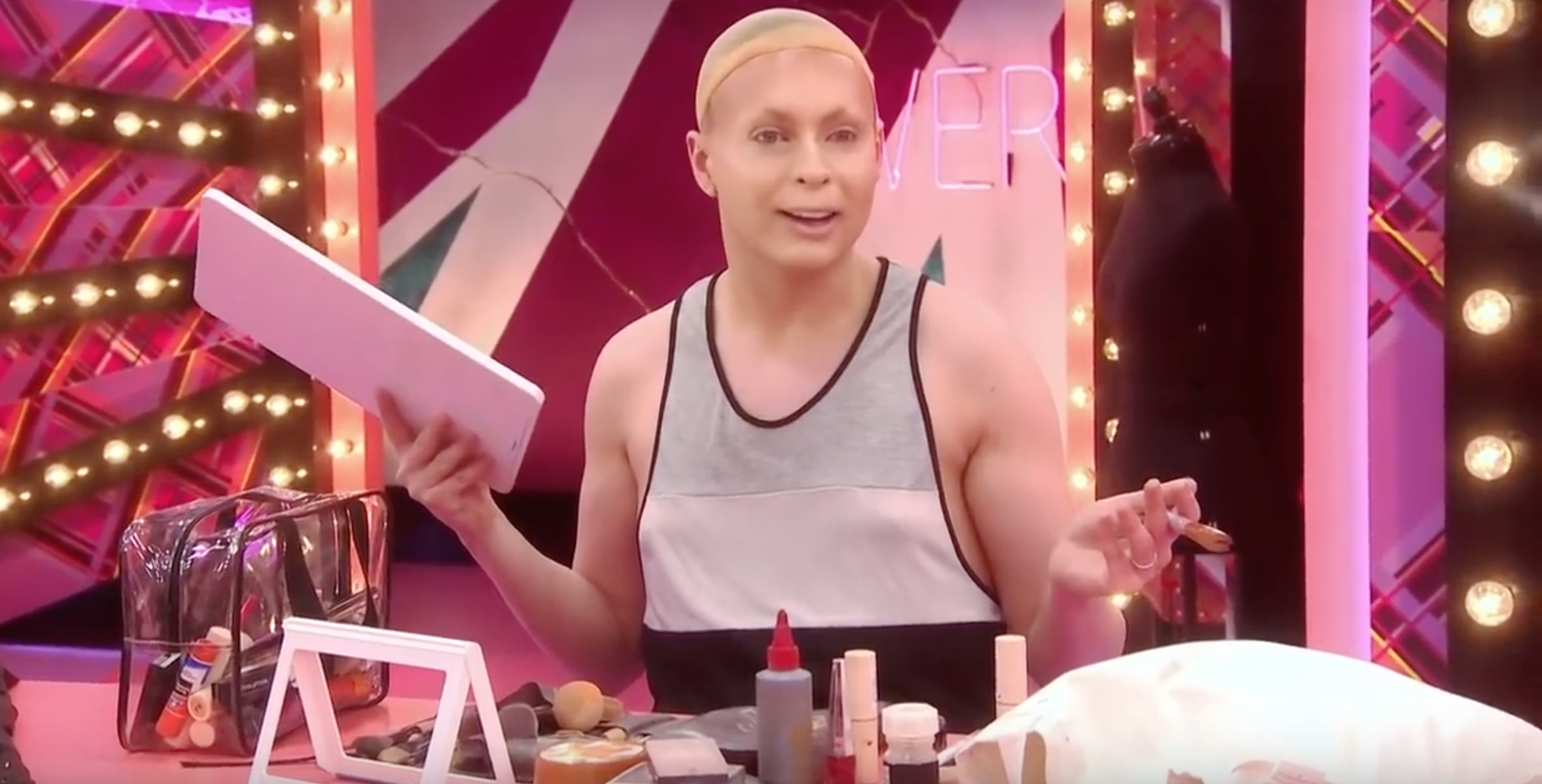 But enough about the rehearsals, on to the runway!

This week, the queens had to present their best ‘Bond Girl’ look and I was so excited to see what the queens would do for this theme. I’m expecting camp, sex appeal and seedy pun names.

I actually rather liked this simple black dress. It fit her perfectly, the mixed-width shoulder straps were fun and the train was beaut. 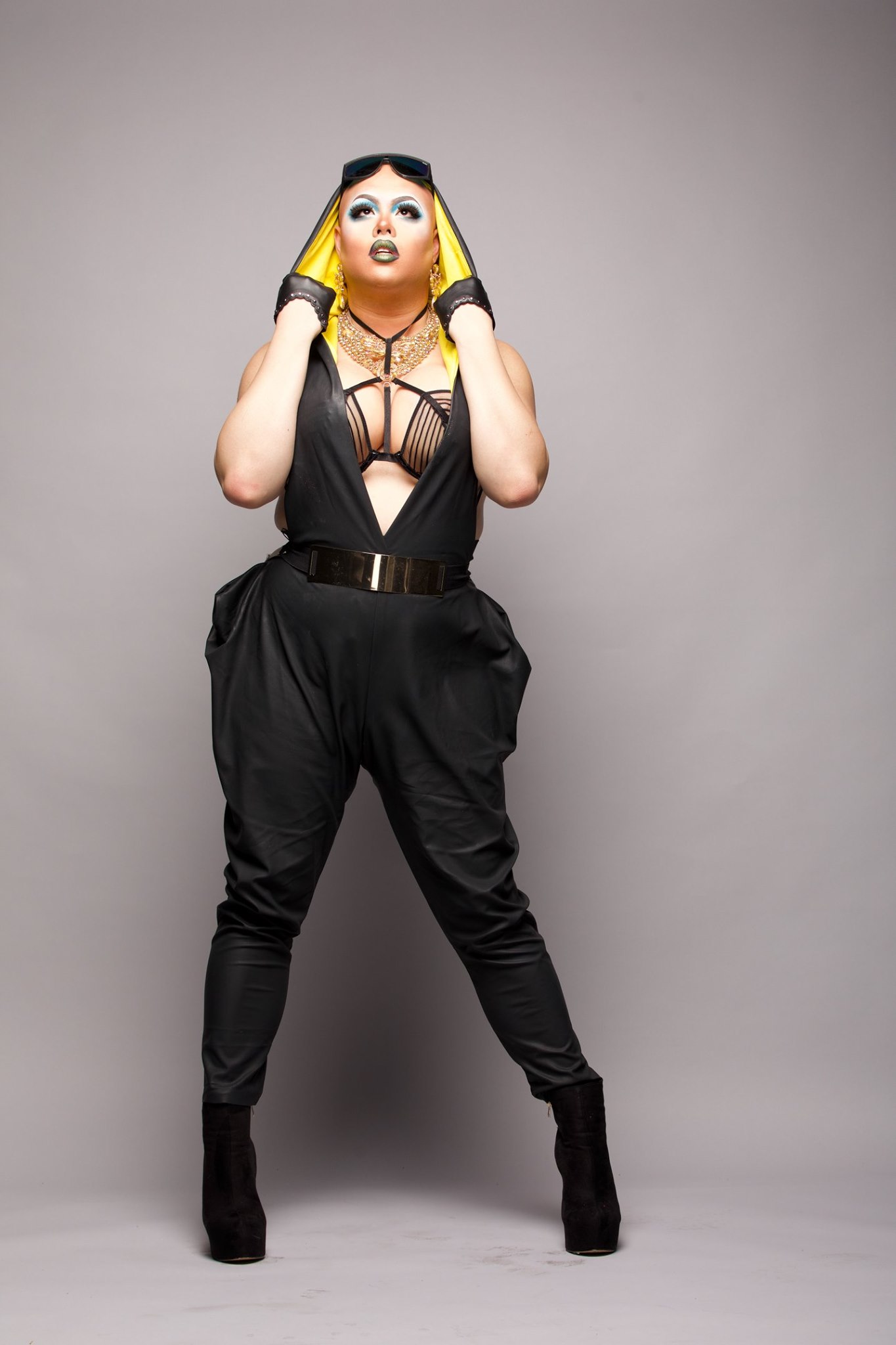 I didn’t really love this look but I didn’t hate it either. However, because she immediately followed The Vivienne it just fell a little flat. I did like that she rocked her bald head with a hood and sunglasses but it just wasn’t enough for me to be wowed. 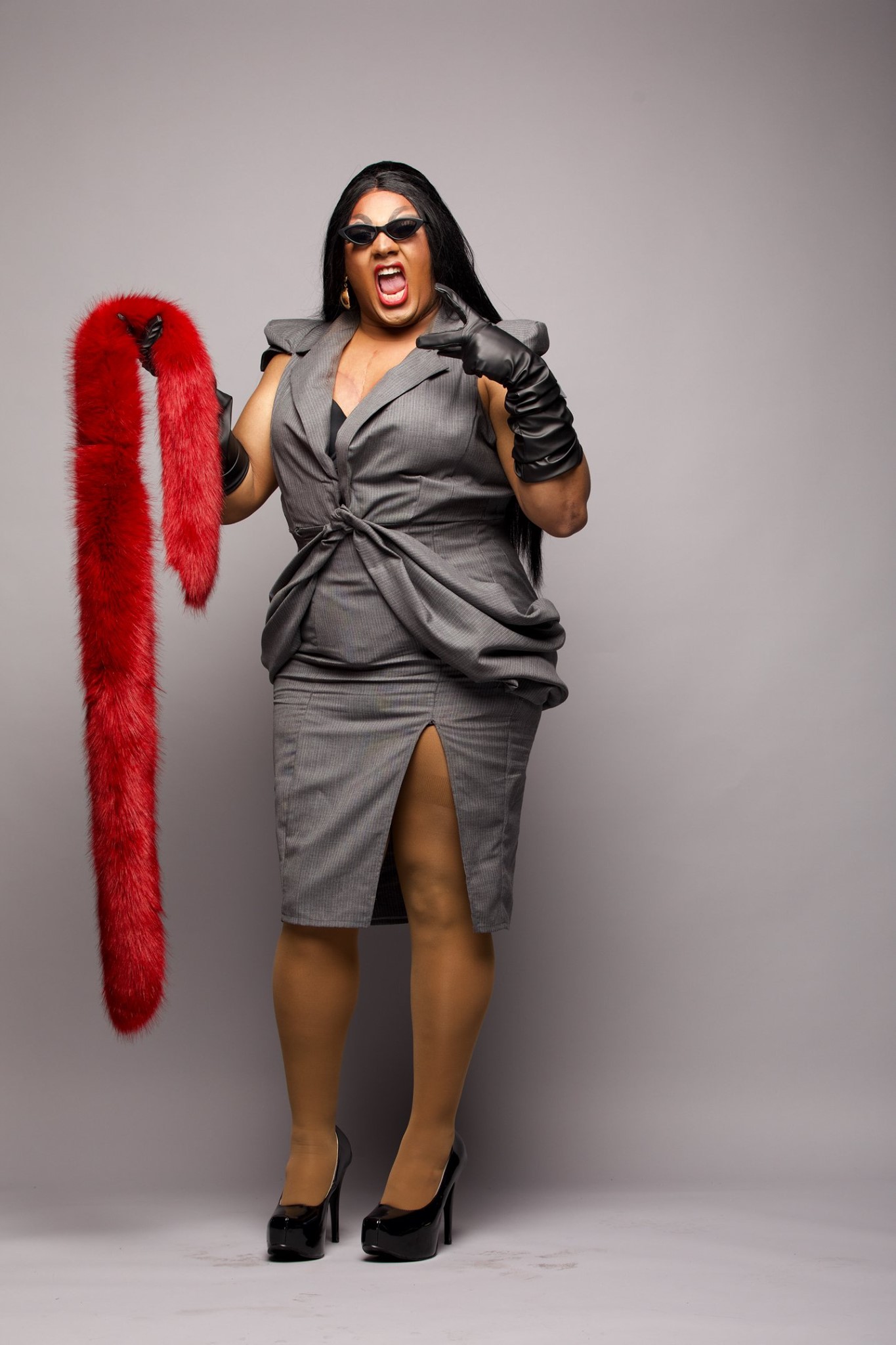 I’ve gotta be honest, I didn’t quite get this joke name and for a Bond girl to have her name and occupation all based around ‘tits’, she didn’t really show much ‘tit’. The dress was ill-fitting, the wig was flat and it just didn’t do anything particularly exciting.

You can always depend on Baga to give you a gay old time. This sparkly tuxedo looked chic and sassy (Jasmine Masters could have used some tips when she went back on All Stars). Baga sold the sass, gave you pure Liza and made me howl with laughter thanks to her runway presentation – NAILED IT! 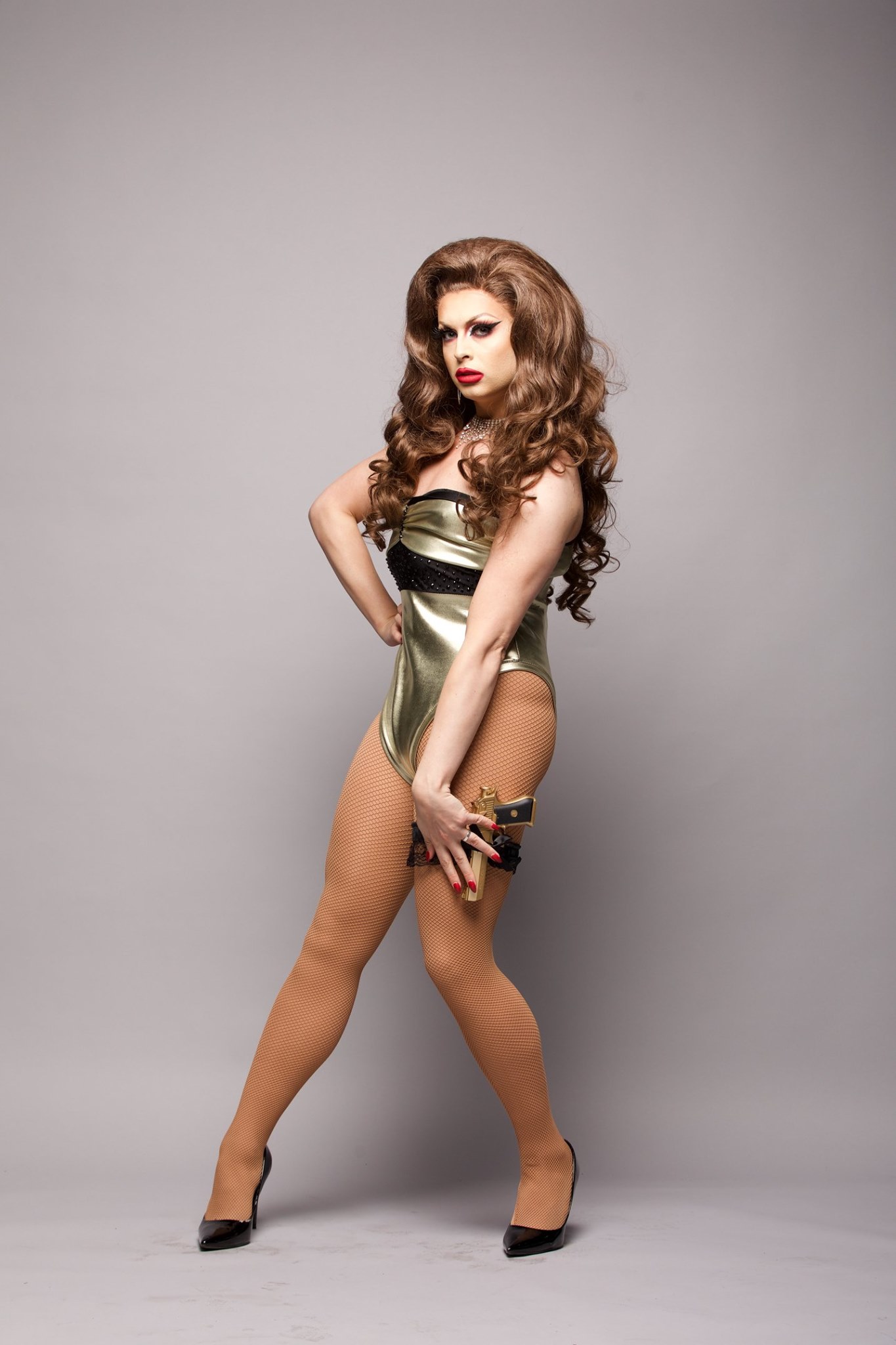 Meh. The idea was kind of classic Bond but the execution was diabolical. The dress was very underwhelming and the the reveal showed off a corset with no shape – no tits, no hips, no butt. Why?! 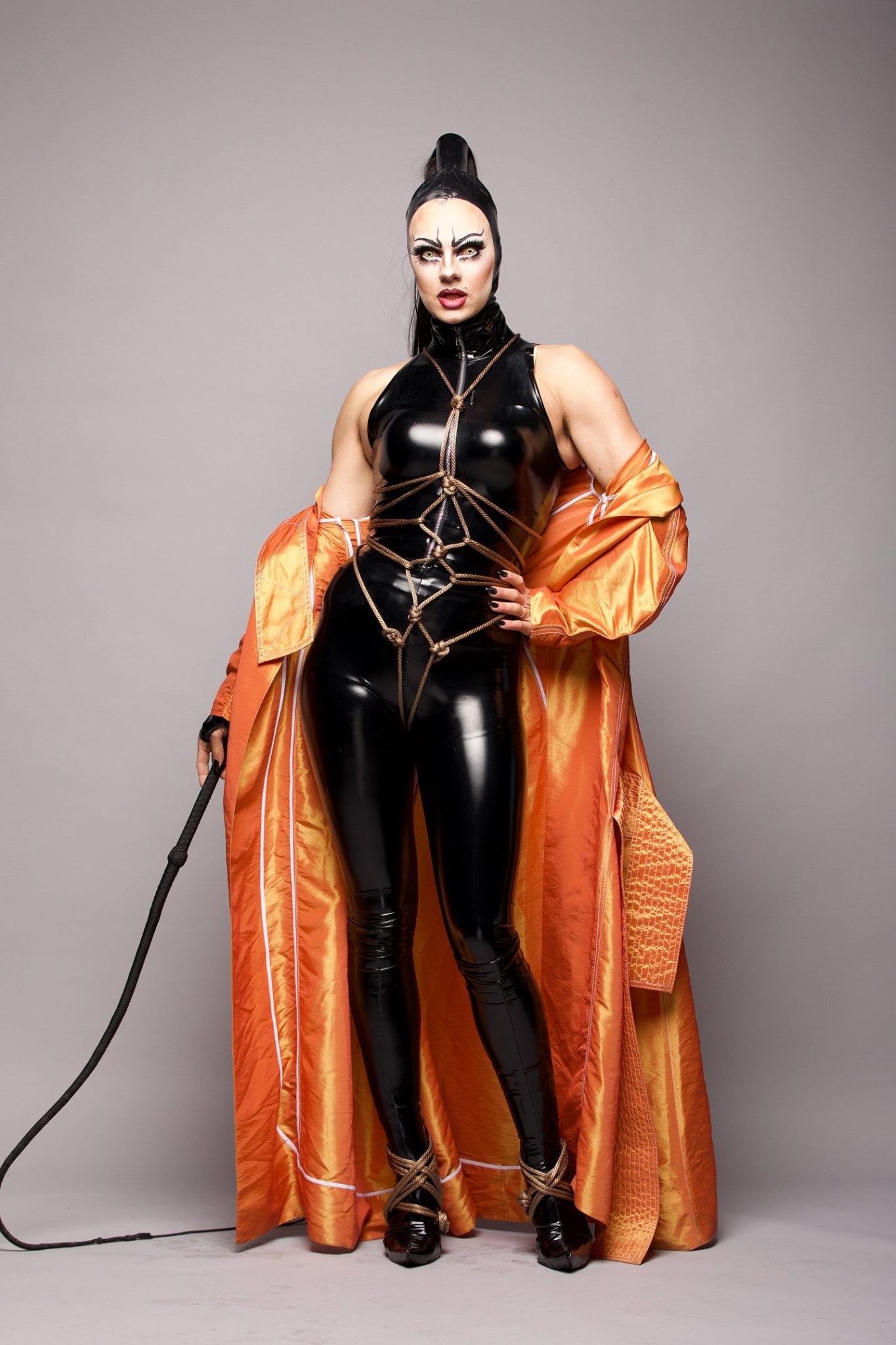 YAAAAAASSSSS! This orange coat was fucking stunning and I need it in my life quite frankly. And then the reveal, oh my Lord the reveal! That bondage number was perfection. My top look of the week! Bravo Crystal. 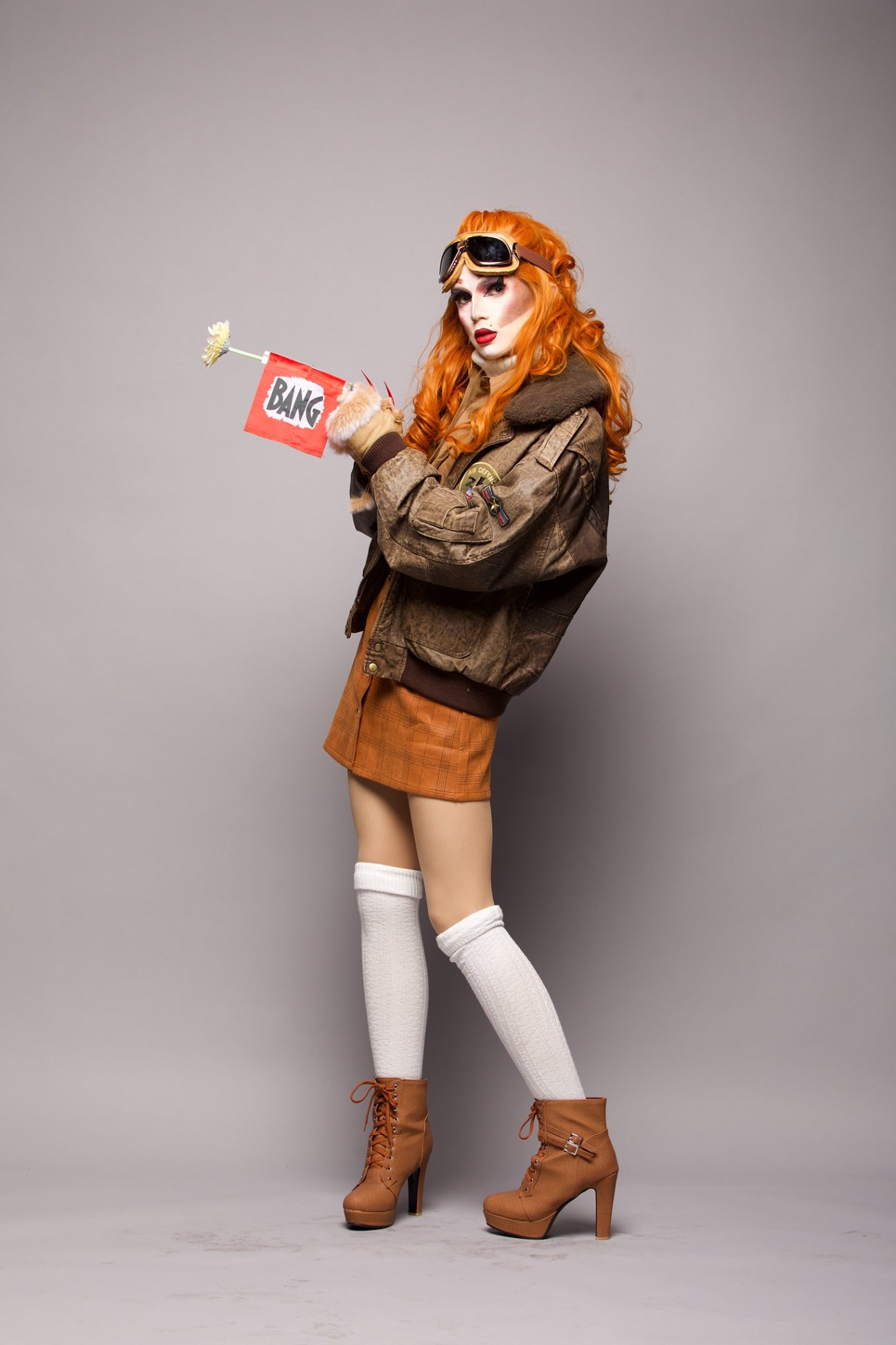 The ‘Bang Me’ signs were kind of cute but that was all the joy I got from it. The outfit wasn’t bad, but the makeup kind of ruined it, the flat wig was a ‘meh’ and she just didn’t sell the character for me, she was just stumbling around like a drunkard… a Bond girl would never. 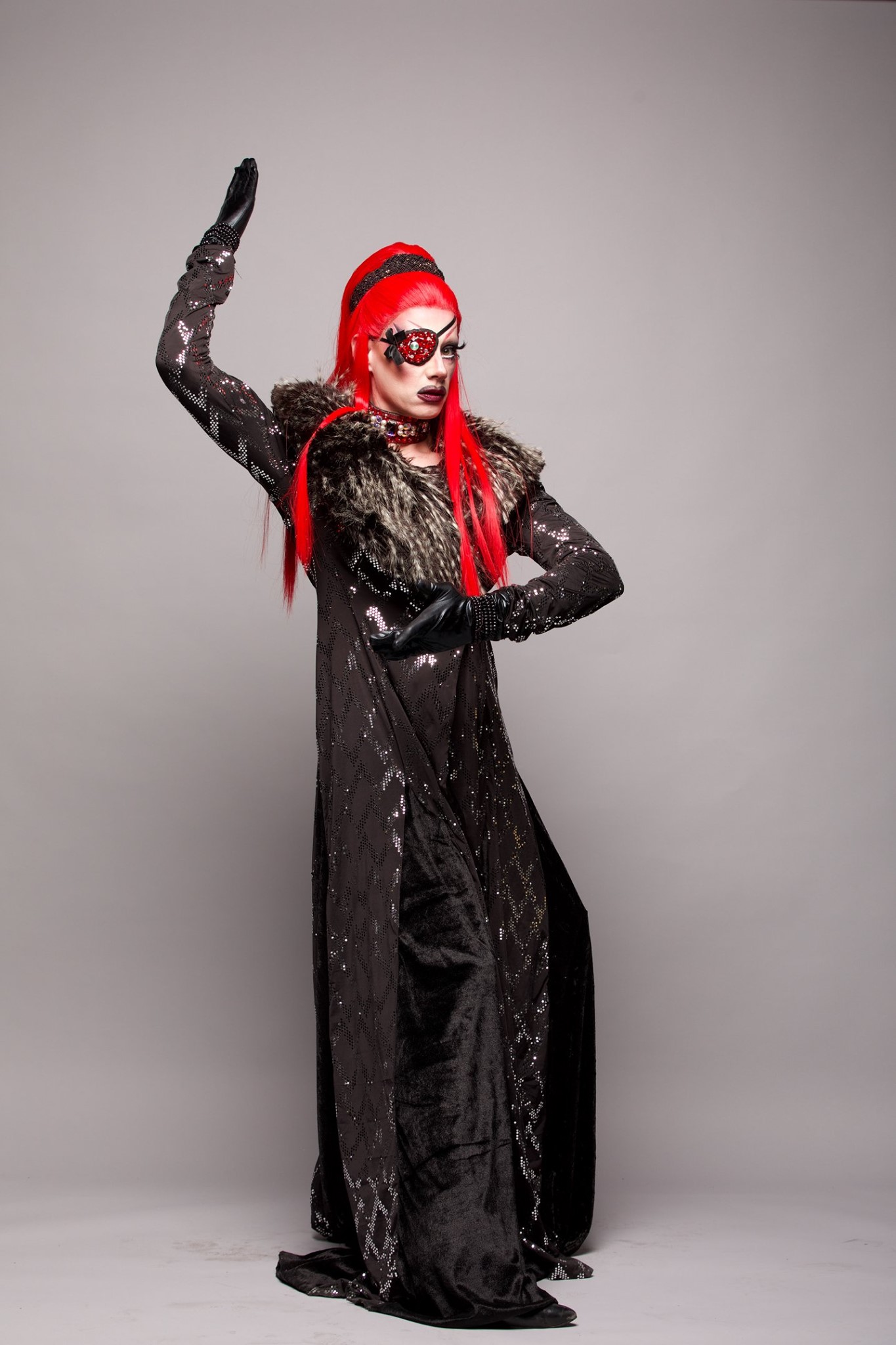 Another spectacular pun name. For our American viewers who may have missed it, Paracetamol is a painkiller. I loved the eyepatch with the bold red wig and her presentation sold me the ‘deadly assassin’ fantasy.

Okay, so I actually do like this outfit, however, this felt more sci-fi than James Bond and that’s why I have to boot it.

The Vivienne’s team nailed it, yes, Sum Ting Wong was the weakest, but still passable but by far, Baga was the star of the show.

Divina also did a great job and it was a shame that she was on the weaker team because she was another standout. Cheryl was a bit naff and Scaredy… well… that was tragic. After watching it back, I thought Blu Hydrangea did a pretty good job. The accent was fun and she was present in the scene.

Naturally, Baga Chipz was the winner this week and I couldn’t be happier. Divina had a bit of a breakdown because she feels like she isn’t delivering what she knows she can do and Scaredy Kat was obviously in the bottom. 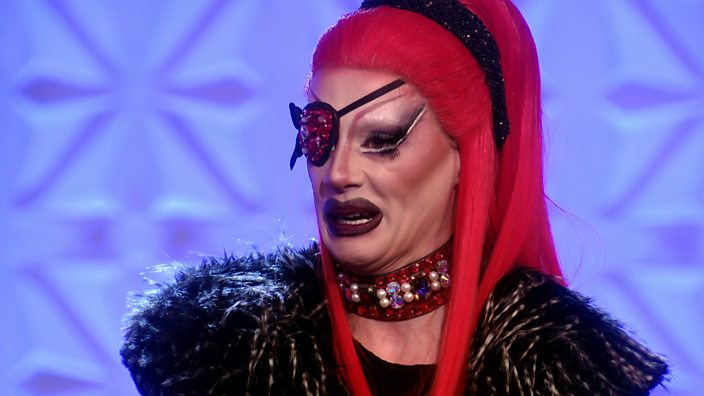 But who would she be facing? It was between Cheryl and Blu and I personally think Cheryl should have been in the bottom this week. She just hasn’t delivered on the show yet and it’s a shame.

Now here me out, I think they’re deliberately not putting Cheryl in the lipsync (despite being in the bottom 3 twice now) because they’re waiting for her to meet Cheryl Cole who will be a guest judge at some point in the series and no doubt they’ll have her lipsyncing to Cheryl’s song where she will either stay and get recognition from her hero or be eliminated and make a shocking TV moment.

But in the end it was Blu who would be joining Scaredy in the lipsync.

The queens had to perform to Bananarama’s Venus which is such a camp classic. “But how did they do?!” I hear you cry, well…

Blu wasn’t too shabby but it didn’t particularly wow me. She did an awkward dramatic jump where she just went back onto her feet then fell onto her knees which looked off (and rather painful).

Scaredy Kat, well… she… erm… She kind of danced like a mum at a wedding who got absolutely twatted and tried to dance to Wuthering Heights on the dancefloor. She was doing some weird withdrawal shakes, fake gasping and just generally stumbling all over the shop.

Much like her acting challenge, it was painful to watch and so this kitty was put down.

She may have been eliminated, but she gave the queens a great departing message:

“That wasn’t a bad first gig”

I have to admit, that did make me chuckle. She’s young and I’m sure she’ll be doing a lot more in the future… hopefully a few dance lessons to start before she starts booking gigs.

For the first time in a long time, I think the right queen won and the right queen went home. Baga shat all over the competition with her acting and her Lazer Minnelli just topped off this piece of comedy gold. I think it was possibly the strongest acting challenge ever seen on Drag Race. British queens know how to do humour and Baga, The Vivienne and Divina knocked it out of the park. The future American queens could learn a thing or two from this acting challenge.

It was a shame that Divina was on the weaker team because I felt she also killed it this week and could have been in with a shot of winning. But in the end, Scaredy was the weakest and it was her time to Sashay Away.

This week, Tom gained 8 points and I (sadly) walked away with 4 points! That means my total is now on 10 points and Tom has shot ahead with 13 points. Bloody Norah Scaredy Kat! 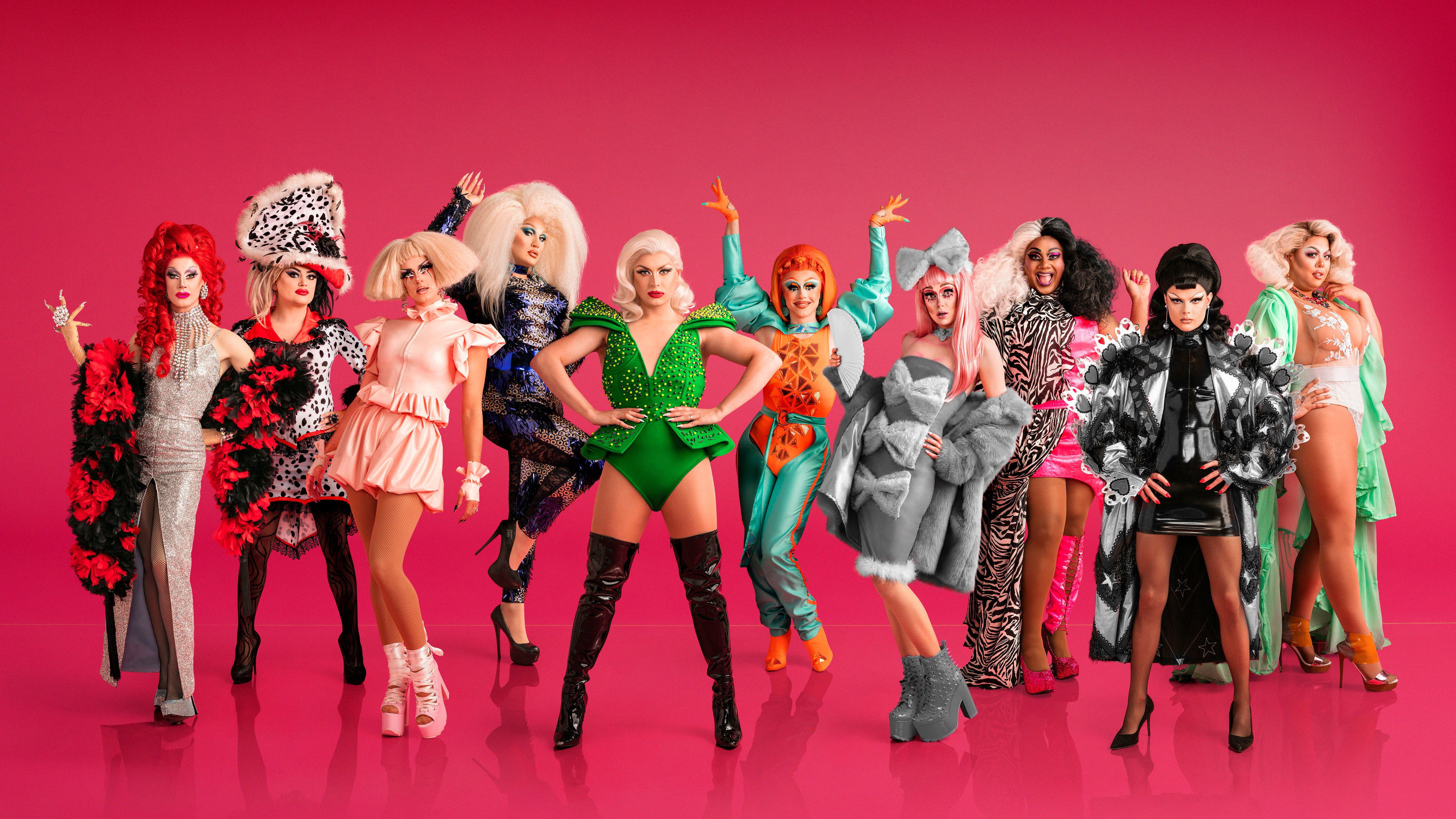 The two youngest queens are now out of the competition, could Blu be next? Only time will tell…