I know this is a bit of a touch-and-go topic to talk about but I feel like it needs addressing. Sherry Pie, real name Joey Gugliemelli, is a contestant on RuPaul’s Drag Race Season 12. So far, she’s been killing the competition. Sherry Pie’s campy persona, quick wit and bundles of talent which actually makes this all a little more awkward.

By now, I’m sure all you gays and girls know about the Sherry Pie scandal. If not, let me brief it because I don’t want to give it too much air time. 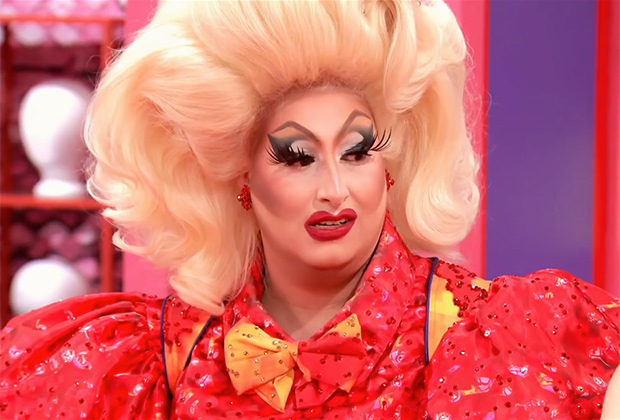 At some point in her past (during her time at university I believe), Sherry Pie created an internet persona used to catfish fellow actors from his school. He pretended to be a female casting agent looking to audition people for upcoming productions. Long story short, there were no productions and the persona was used solely to get attractive male students to send in sexual audition tapes – everything from a muscle worship scenes to one guy actually wanking on camera.

At this point, I think 8 people have come forward with similar stories and experiences of what Sherry did. Now, here’s the potentially controversial point. Yes, what Sherry did was perverse, creepy and inconsiderate but the world is treating her like a murderer.

Sadly, catfishing is rife in the gay community – you only have to spend 5 minutes on Grindr to notice.  Does it make it right? Absolutely not. But it’s something we should all be assessing now that this case has got so much media attention.

Now, I’ve seen a lot of people chiming in on what’s been going on, from contestants, friends, the drag race fandom and miscellaneous strangers – with almost all of it disowning Sherry. Understandable. 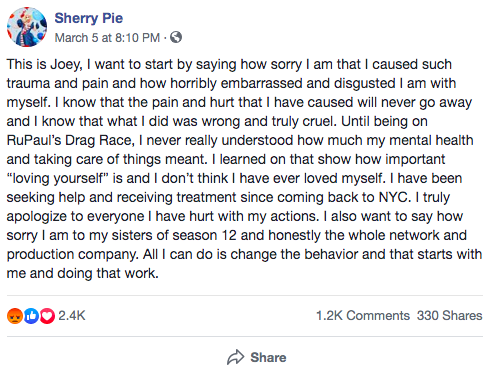 However, I feel that as a generation, we’ve become part of a ‘Cancel Culture’ where people of the Internet will rally together to eliminate someone’s presence and send them into obscurity and I honestly don’t think that’s good. I’ve seen countless people (and Drag Race alum) saying Sherry should be edited out of the show but that’s a joke. Clearly she’s a strong contender and she’s killing the challenges each week – pretending she’s doesn’t exist is a piss-take.

Not only does the world want to act like she doesn’t exist, but this whole scandal is undermining the hard work the contestants, producers and everybody who worked on the show. Don’t tarnish the whole show by one queen’s past. 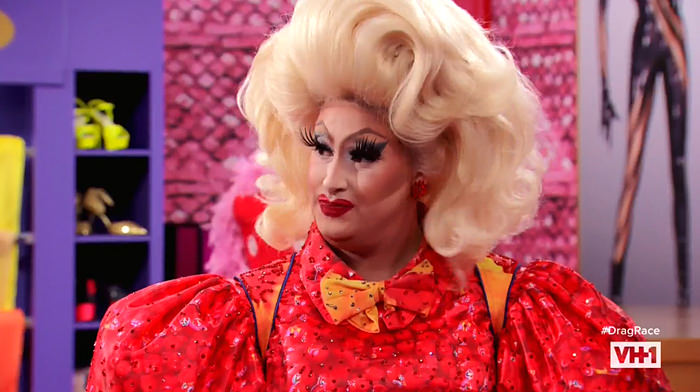 Sherry Pie will still feature in my episode reviews

Now, I’m all pretty certain that Sherry has done really well on the show. I’m also fairly confident she made the finale. Naturally, the show has disqualified her because of this. However as the show was filmed 6 months ago, the whole competition was rounded up (apart from the final) before this case came to fruition.

Fashion Photo RuView and The Pit Stop are two examples of online sub-shows by WOW Presents that reviews the episodes. Apart from mentioning if she wins a challenge, the shows have chosen to completely ghost Sherry Pie. I understand why but I feel sad for the designer(s) who have spent hours creating Sherry’s costumes for the competition.

Say what you want about Sherry, but I think the outfits so far have been phenomenal. I will continue to give the designers credit by continuing to review Sherry Pie’s looks as I would any other queen in the competition.

Also, I will be continuing to feature Sherry Pie (as a contestant) in my Drag Race Reviews on my blog and I want you all to know that I am in no way endorsing her behaviour, I want to review each episode fairly and honestly.

I want to apologise in advance now to those who think I shouldn’t be featuring Sherry Pie in my reviews. However, just because you’re offended, doesn’t necessarily mean you’re right. R Kelly’s music still gets played on the radio. Kevin Spacey films can still be found on Netflix and Sherry Pie is still a contestant on this show that I’m reviewing. Let’s all just enjoy the season together. Come on, you know you want to.