Are Retailers Trying To Sell ‘Gay Pride’ To The LGBT?

It’s that time of year again. “Pride Month” has minced its way back into our lives with a whole heap of rainbows and glitter. For a lot of brands, involving themselves with Gay Pride and the LGBTQ+ community is a way of showing solidarity. However, for others, it’s a great big cash cow and a chance to try and sell a whole lot of shitty ‘merch’. Am I just being a bit of a bitter queen? No. Okay, maybe just a little bit. But who can blame me – I love a good bit of kitsch tack – but not shit. 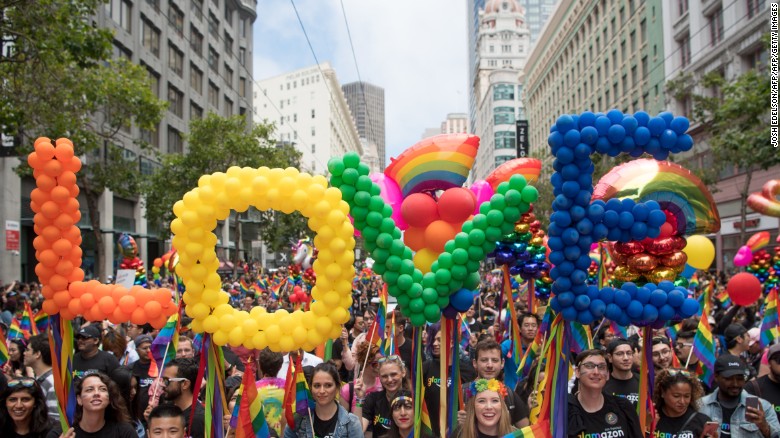 Yes, it seems that being gay is now “cool”. Is that a surprise? No. Gay people have long been a part of music, fashion, television and the arts so it’s no real shocker to find out that gay people can be cool.

However, it doesn’t necessarily mean we’ve overcome every battle. Yes, in the UK we can now legally get married. But it was only a few decades ago when being gay or committing acts of ‘buggery’ was a criminal offence. But I don’t want to get into all that. I’m here to talk about a surface-level annoyance of clothes.

Is gay the next “in” thing?

Now don’t get me wrong, I’m all for brands supporting pride. Having allies that are big corporations does a lot as it shows that the LGBTQ+ community shouldn’t feel like a minority. 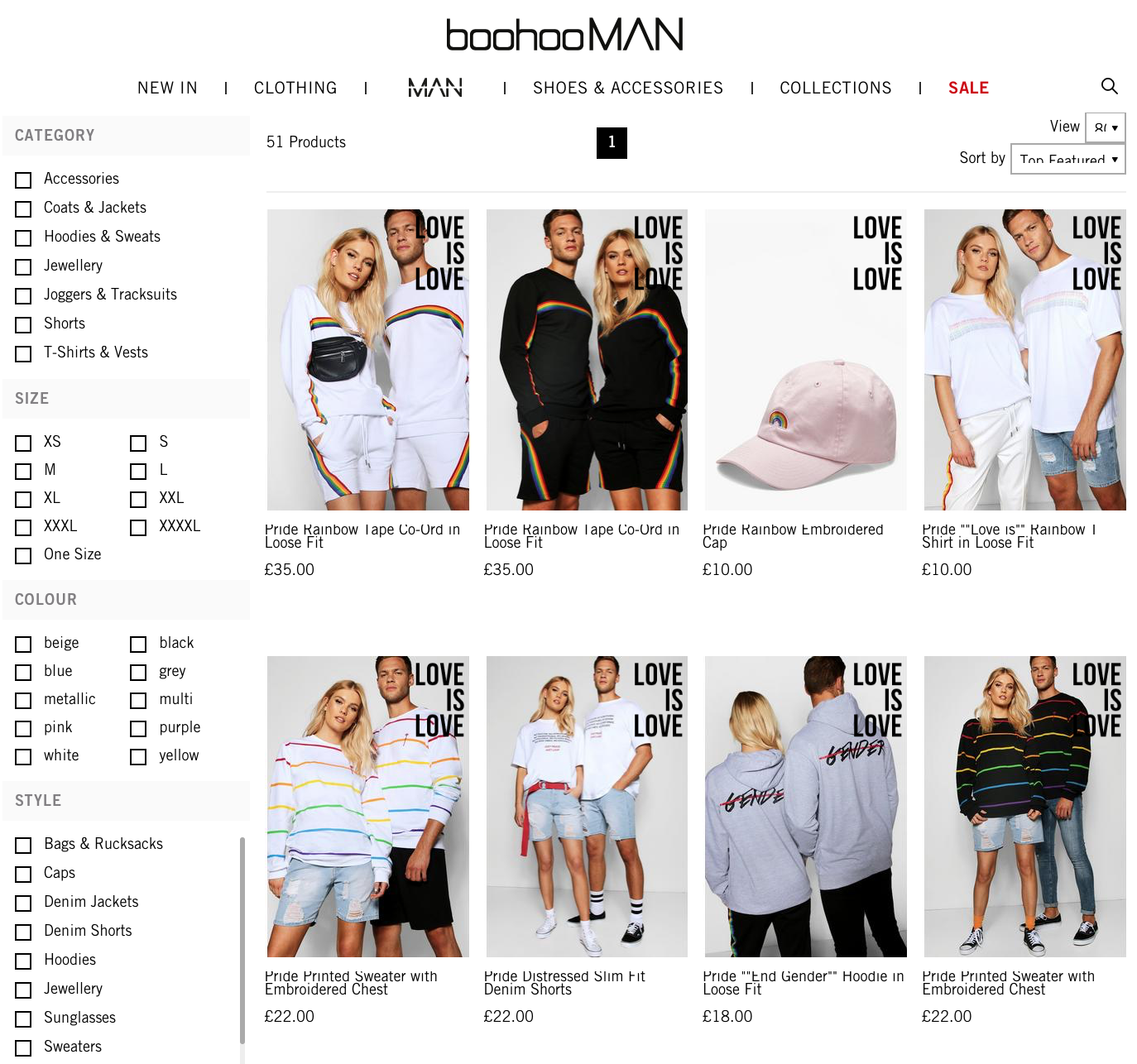 However, ‘Pride’ now has been very much turned into a walking advertisement for ‘cool’ and ‘forward thinking’ brands to hop on the “gay is okay” bandwagon.

To be honest, if you made something popular enough, brands would shag the life out of it to try and milk a few coins out of it. Last year we made The Babadook a gay icon – there’s no stopping us now!

Don’t get me wrong, as the years go by, more and more people are accepting (and rightfully so) of the LGBT community. I know straight men with kids who watch RuPaul’s Drag Race, my mum and her chums have come to watch a Beyonce tribute act at a gay bar with me and friends say “If I were gay, I’d shag you!” – the last one is a joke.

But more than ever, there’s a unity, maybe the good weather and England’s successful run in the World Cup playing a big part of it, but we’re definitely starting to get people onto the right side of history.

“If we support Gay Pride, people will buy more clothes”

This logic seems to be quite prominent amongst many fashion brands. Some high-fashion brands manage to pay a glorious homage such as the last Burberry show Christopher Bailey did after his 17-year run at the brand. It was fun, it was colourful, youthful and they even added some rainbow stripes to the iconic Burberry check design.

Now I’m all about flying your rainbow flags high in the sky, but I do truly believe that there are a lot of brands out there who just latch onto ‘the gay thing’ to seem hip and relevant. There have been numerous high-street retailers that have really gone in on trying to look supportive without offering anything really.

Primark hasn’t been as well received

Yes, though their intentions were pure, Primark has come under a bit of fire for their pride collection in collaboration with Stonewall.

The collection itself is pretty standard for Primark. Nothing offensive, basic designs, colourful, cheap and cheerful ‘Pride’ clothing.  For kids on a budget or people who want to grab a quick top to show off their solidarity via some rainbow colours and ‘love is love’ style messages, this is a pretty easy place to get your bits and bobs.

But it’s where the money is actually going that has some people a tad vexed.

If you click on the tweet, you’ll be able to see the entire thread Steve wrote about his many issues with the Primark x Stonewall collection.

After the tweet went viral, Primark responded with a statement:

After being alerted by some members, the Network was disappointed to see that proceeds from Primark’s range of ‘Pride’ clothing and accessories, launched in time for Pride season, is not being donated to the Pride organisations that organise these events. Instead, it is being given to Stonewall who, whilst they attend some Prides, do not organise the events themselves.

All Pride organisations are voluntary bodies that struggle every year to raise the funds necessary to hold these major public events, most of which are free to attend. In the last week, in one city where Primark will be selling these products, the Pride has announced it is scaling back its event due to a lack of funds. This is a daily reality for most Pride organisers.

Stonewall have been critical of Prides in the past, and this is an insult to those Prides who sell their own merchandise to raise funds for their events. We urge everyone who wants to support their local Pride to do so by purchasing merchandise from them, or from stall holders at the event. And we call on Stonewall to work with us to reallocate the income they receive from this partnership so that it can be used to directly support Pride organisers who are driving the Pride movement for the good of all LGBT+ people across the UK.

Finally, given Primark’s history, we seek reassurances from Primark that the production of these items is not taking place in any country where homosexuality is illegal.

It’s honestly hard to say. I’m sure there are some whose intentions are pure. Others are just trying to make a quick bit of cash by using the ‘pink pound’ (Dorothy Dollar if you’re American). That’s where it becomes irritating.

Pride, though it is a celebration, it shouldn’t be forgotten that it is still a form of protest. Pride is supposed to raise awareness in local communities and try and bring true equality into the world. However, a lot of today’s youths have forgotten about the message and instead just see it as a giant street party.

Even though Gay Pride is supposed to be a safe space for LGBTQ+ people, it seems that it’s become a ‘fun day out’ for a lot of straight people. I can’t begin to tell you how many times you hear things like “Well, you can tell she’s a man…” or “I don’t have a problem with people being gay, I just don’t get why some people are so camp” is when it gets annoying. These stigmas are literally the things Pride celebrations are trying to tackle!

Pride attendees are too attracted to the glitter, alcohol and the fun. Let Gay Pride be what it should actually be about – equality and acceptance.

However, there’s been one campaign that really caught my attention and actually made me cry a little bit when I watched it. Believe it or not, it’s a ‘pride outfit’ guide from Gok Wan – no, I’m deadly serious.

If you’re still on the hunt for the perfect ‘Pride Outfit’, look no further. Gok Wan has you covered with his cultural Pride wardrobe!

I don’t know about you, but this video really got me. I enjoyed the jokingly stereotypical ‘style must-have’ formula’s the video used. Then out of nowhere they really started hammering home the harsh truths and realities. Gok delivered the hard-hitting truths perfectly and it really did make me think while watching. Yes, I cried, yes it put things into perspective.

Sorry for being a preacher. Go have fun at Pride. Enjoy the music. Enjoy the togetherness. But please don’t forget what the message of Gay Pride is all about – love. If you can do that, we’re one step closer.