During these crazy coronavirus crisis times, it’s hard to stay motivated, productive, and sane. Jobs are furloughing people left, right and center (myself included) and supermarkets are the most stressful experiences imaginable. In fact, I’ve done well with supermarkets. I’ve only been to ASDA twice and then I’ve bought little bits from my local corner shop. But there’s one thing I’ve noticed that has been selling out in bulk and people are craving it – flour. Yes, flour. That thing that usually lives in the back of your cupboard for years. People are now wanting to make their own bread to avoid supermarket stresses but getting flour is like finding an eligible bachelor in a strip club.

Though your dreams of becoming the next Mary Berry may have been dashed, fear not! Because The Dalesman Group has got you covered. This week I had to shoot some packaging shots and a few photos of flour for Dalesman as they’re now selling 10x 1kg bags of flour for £12. Honestly, flour has become the new white gold. 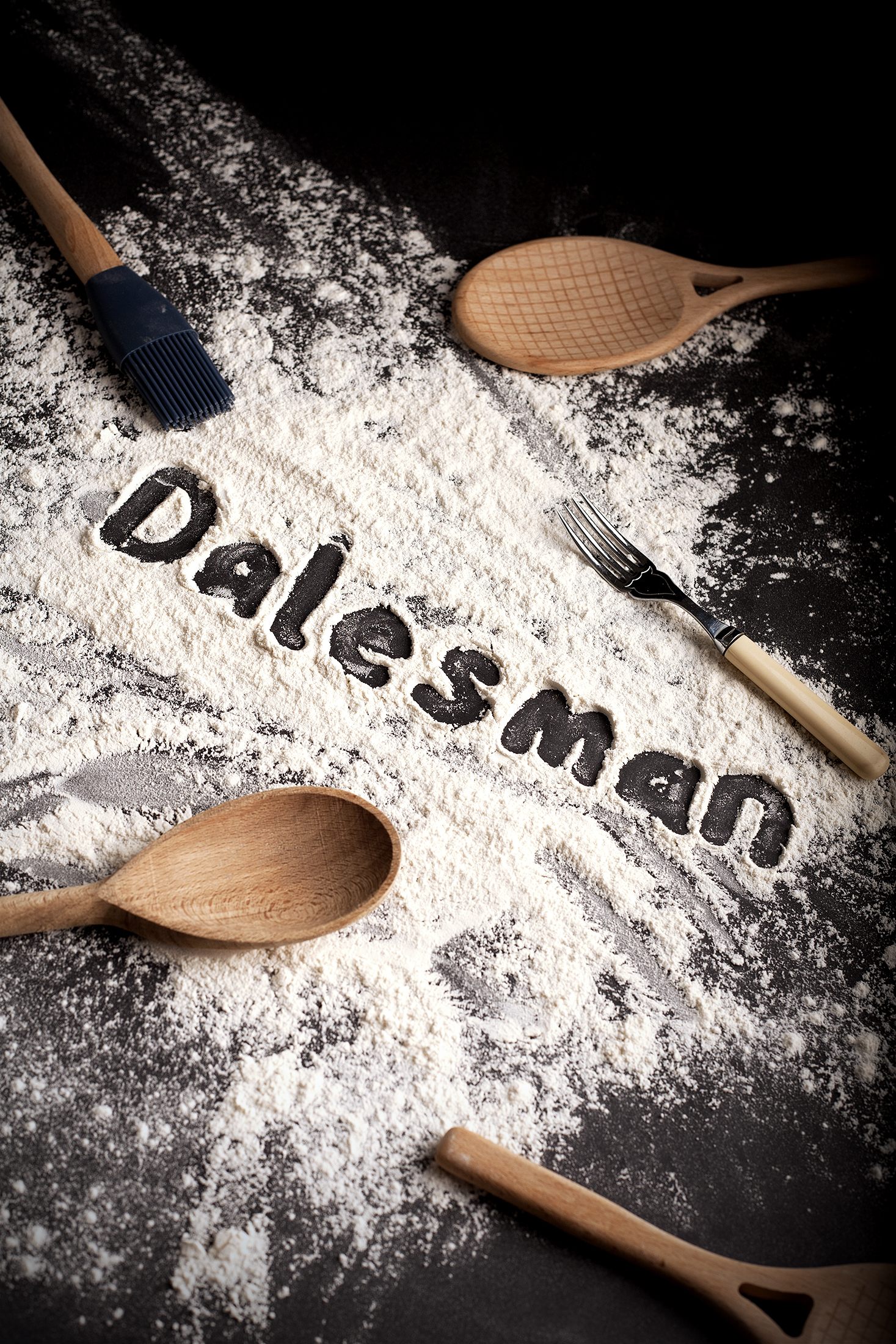 As well as shooting packaging shots for the website, I was asked to do a few ‘arty’ and rustic shots to try and make flour (the plainest of all plain things) look somewhat interesting. I think I managed some nice shots that I was proud of. 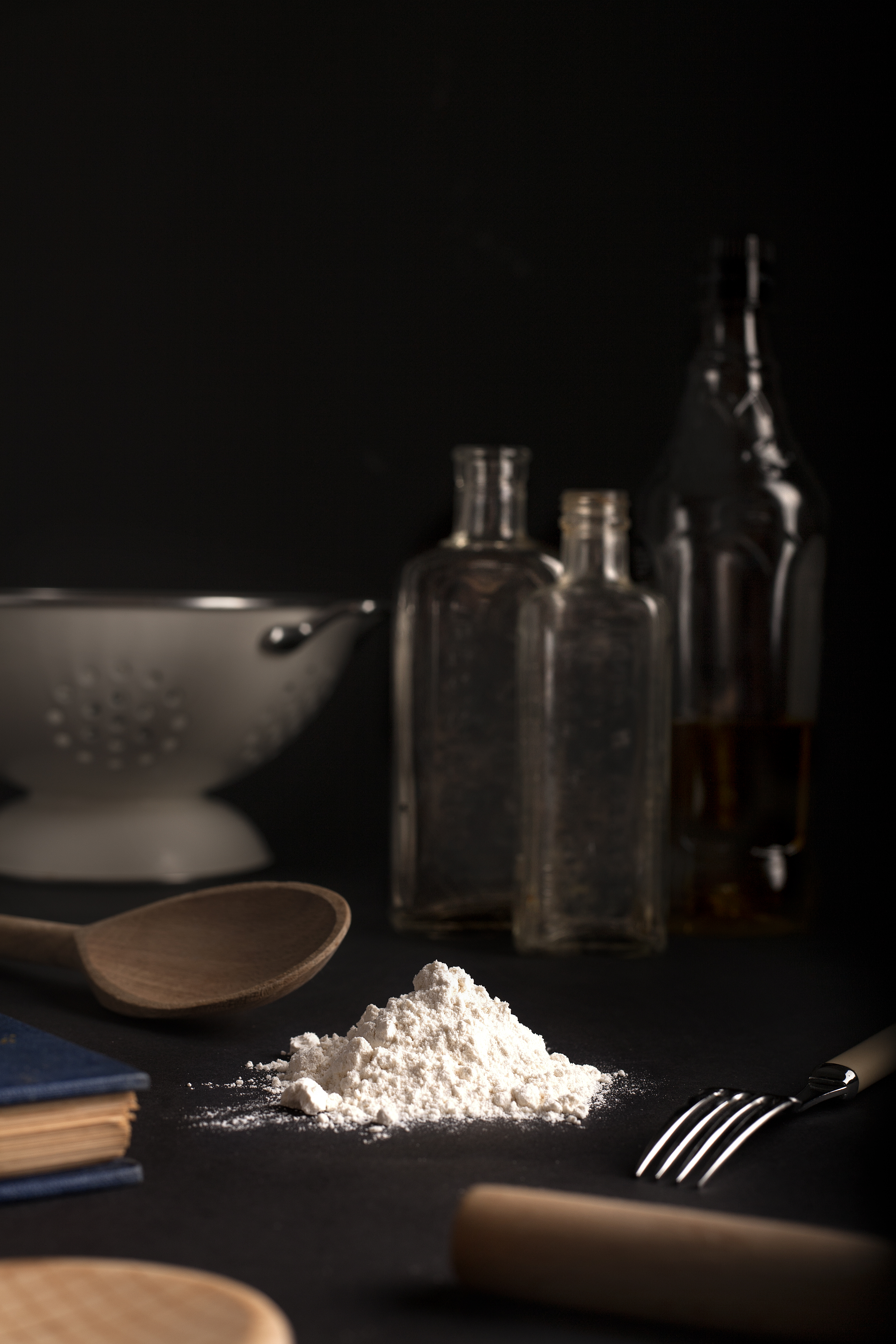 These were also the first proper food images I’ve had to shoot on my own. Normally I work with a small team – a food stylist and I have a brief set from the marketing team but this was a challenge working on my own without any real guidance. You can’t tell from these photos either, but the space I had to work with was incredibly limited. 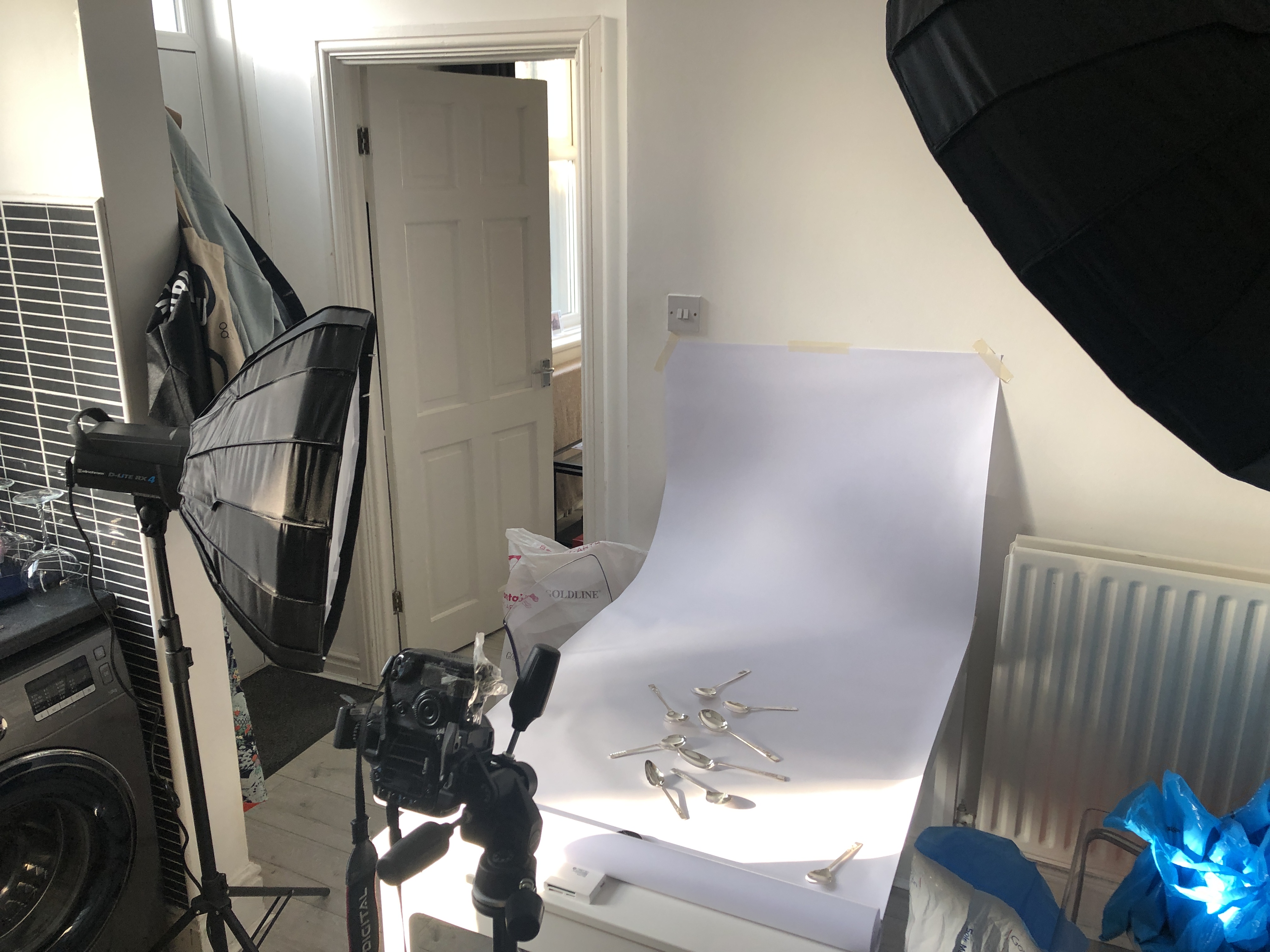 But hey, it’s all about the illusion, right? Still, I found it hard to make flour not look like drugs. 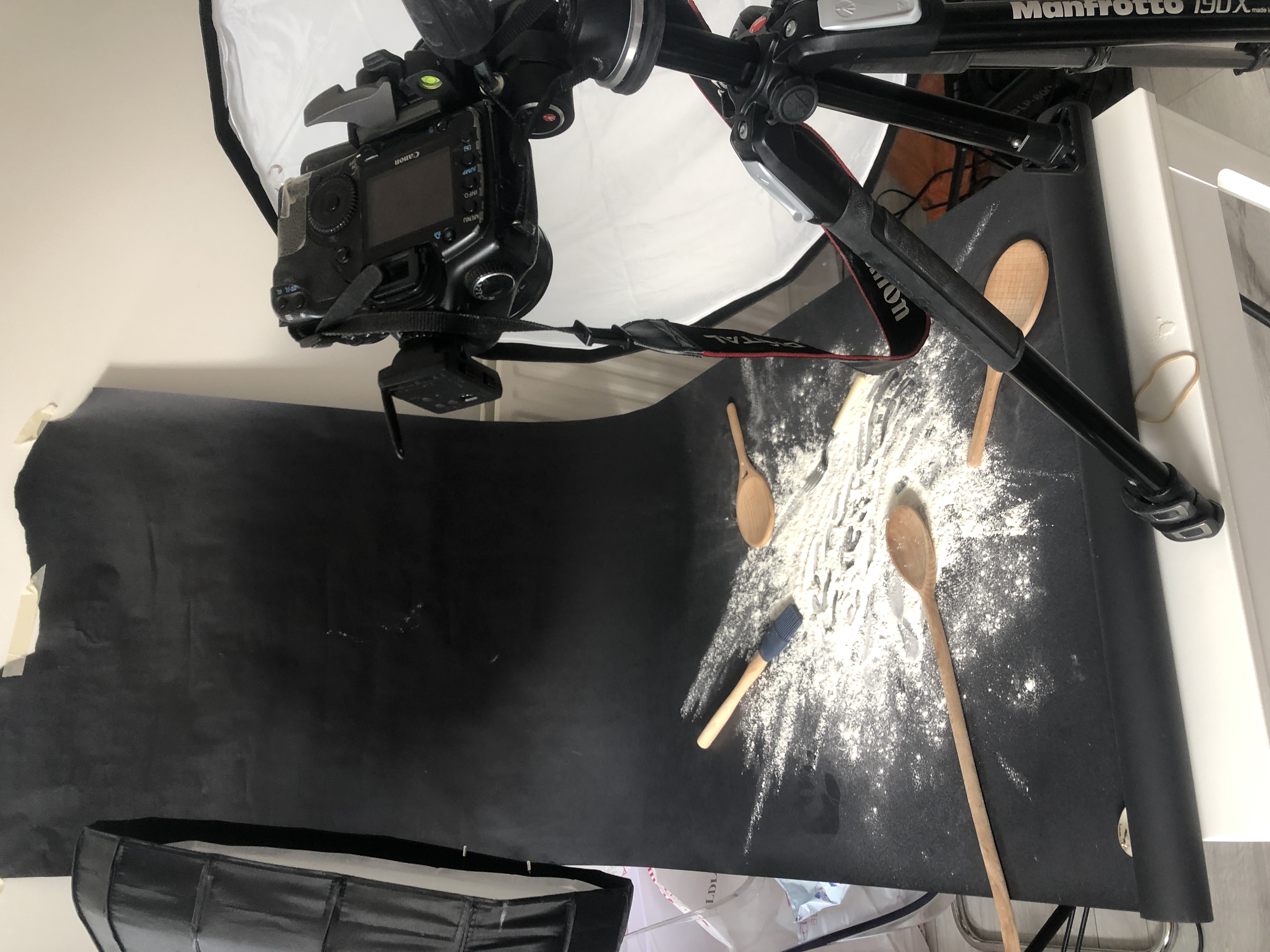 I mean, come on, flour is so plain, it was a challenge to give it a character. 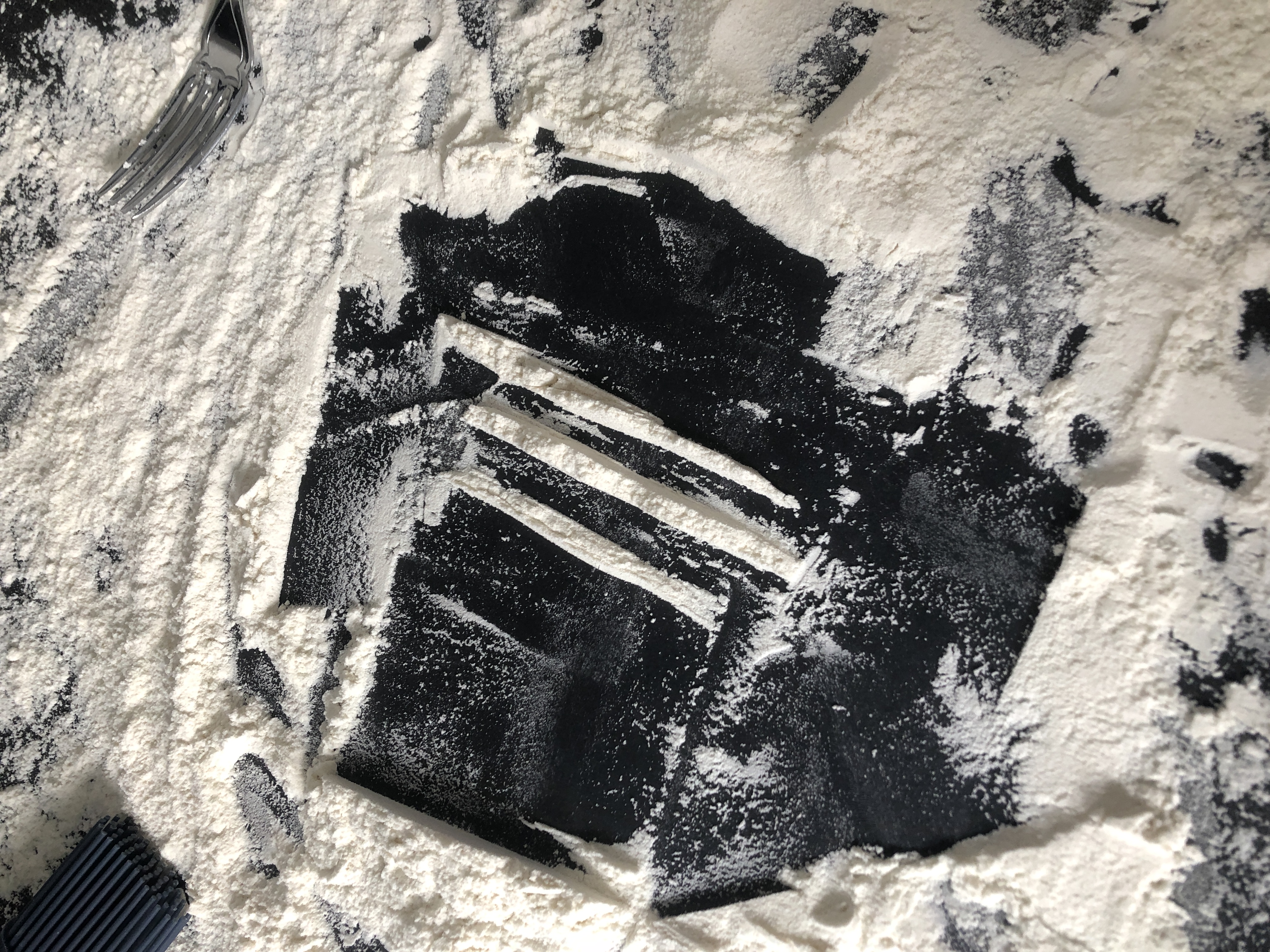 The flour shoot took a bit of a turn

When I got told I would be photographing flour, I couldn’t think of any way to not make it look like drugs so I thought I’d just embrace the moment. And there’s no better white-powdered reference than Scarface. 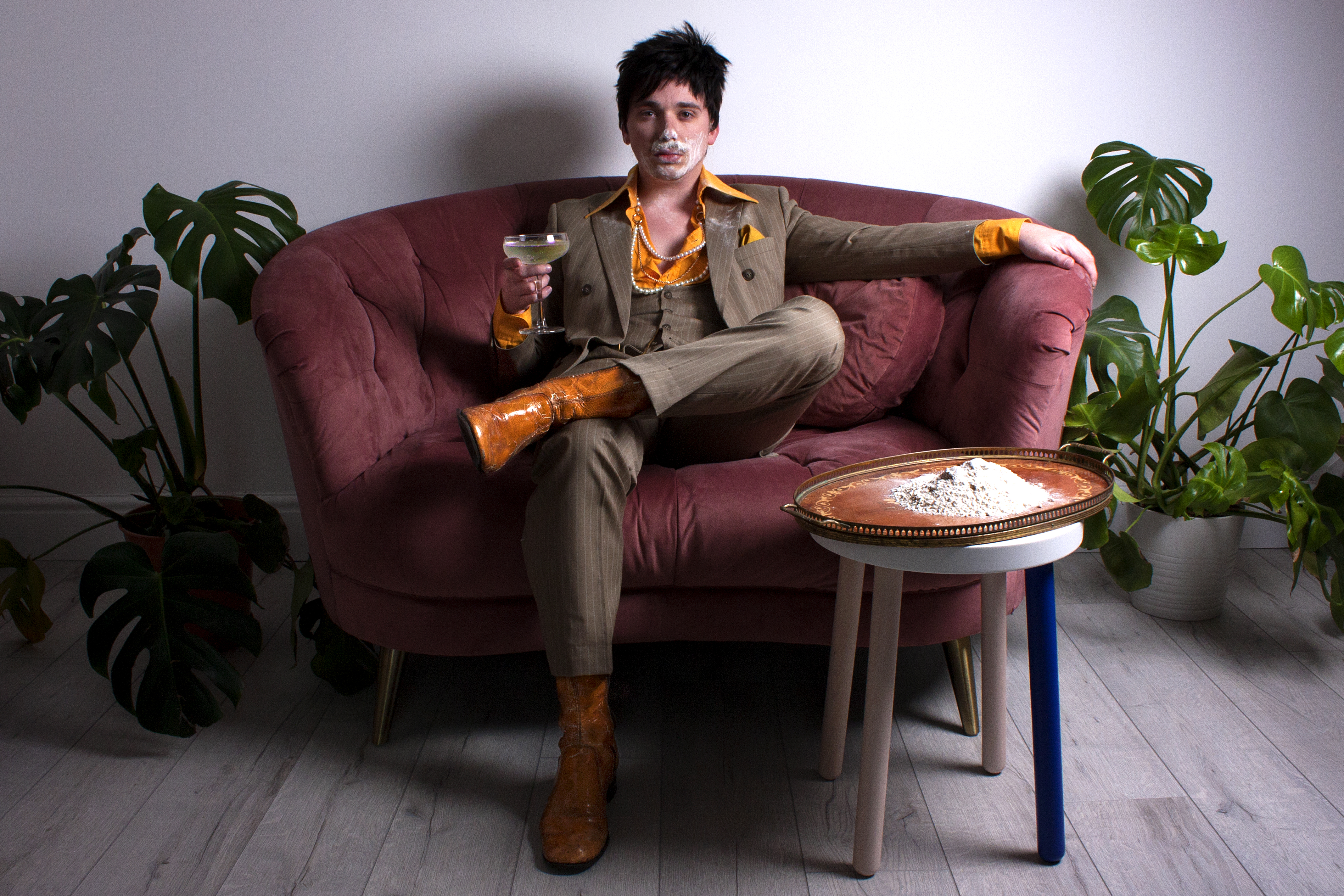 Sure, I’m more ‘Gayface‘ than ‘Scarface‘ but I’ll take it. However, I don’t know if this image will be client approved, but hey – I had fun. Although I definitely look more like Sue Perkins or Christa Ackroyd.

I was absolutely thrilled to find out that my 16-hour day of shooting and editing the required flour shots for work for the fastest deadline ever paid off. When the images went live on the website, over 5 tonnes of flour were sold!

To purchase your bags of flour, click here (and you can thank me later)

Based on how successful the sale of flour was, new machines have been put in place and The Dalesman Group has started selling self-raising flour. Naturally, I shot more pictures to help advertise, and (without blowing my own trumpet) I’m really proud of these shots. 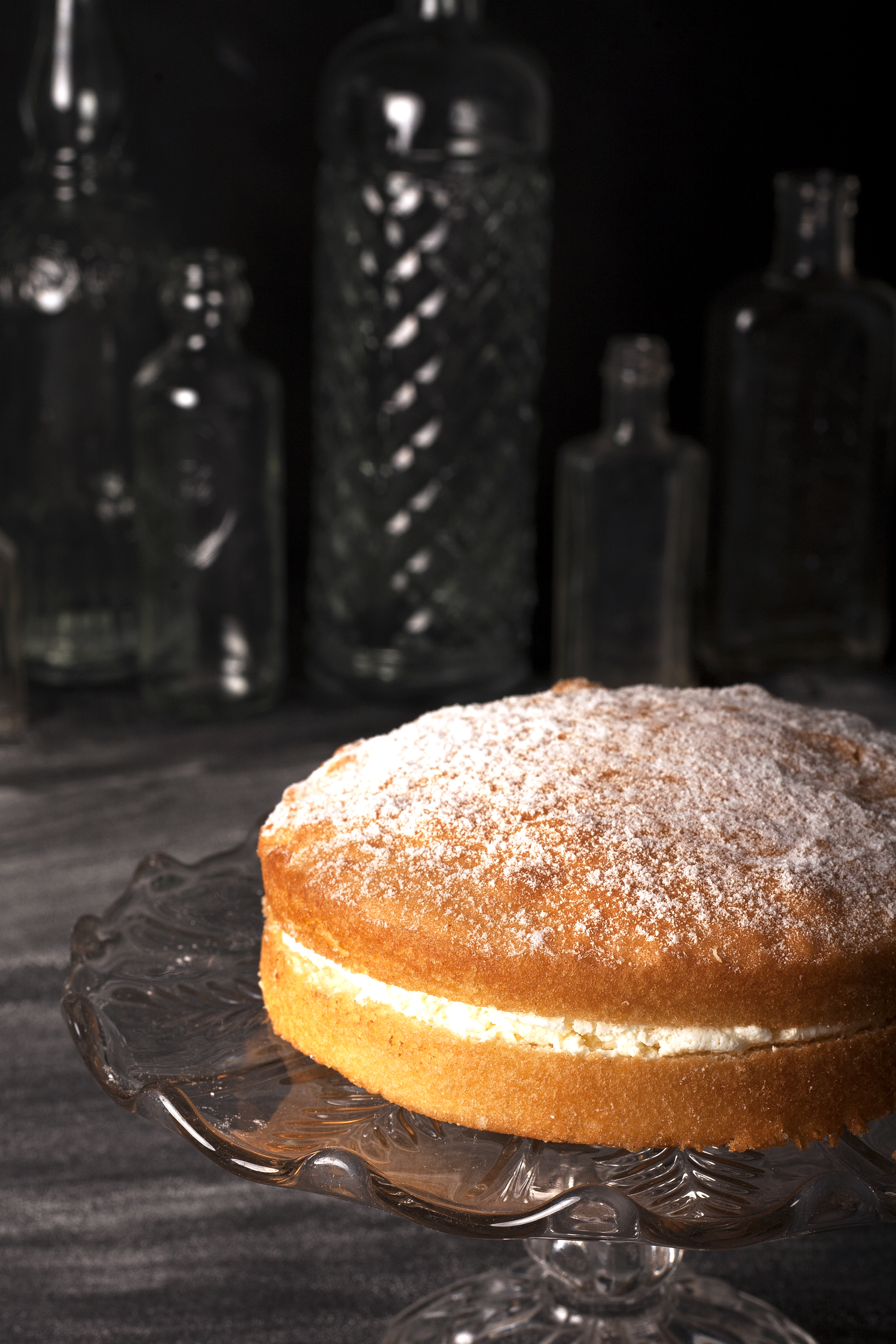 It was also the first proper time I photographed desserts so that was a new challenge for me. I wanted to make the shots look quite dark and moody so the white of the flour and the orange of the sponge shone brightly throughout the images. 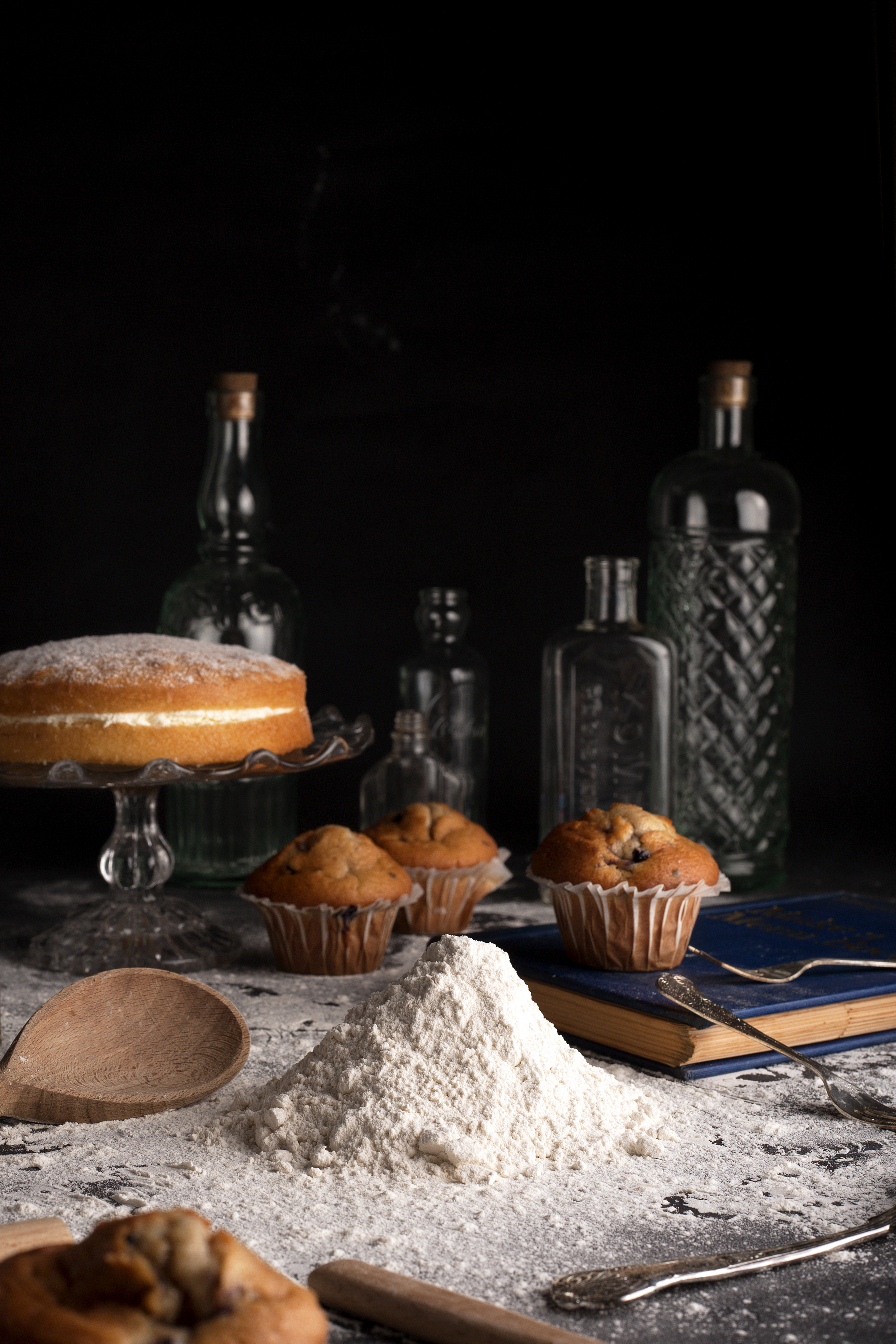 I think I managed to get the result I was after. It was hard to try and come up with ways to show a difference between the regular flour images and the self-raising ones… flour is flour – it’s hard to make it look different. 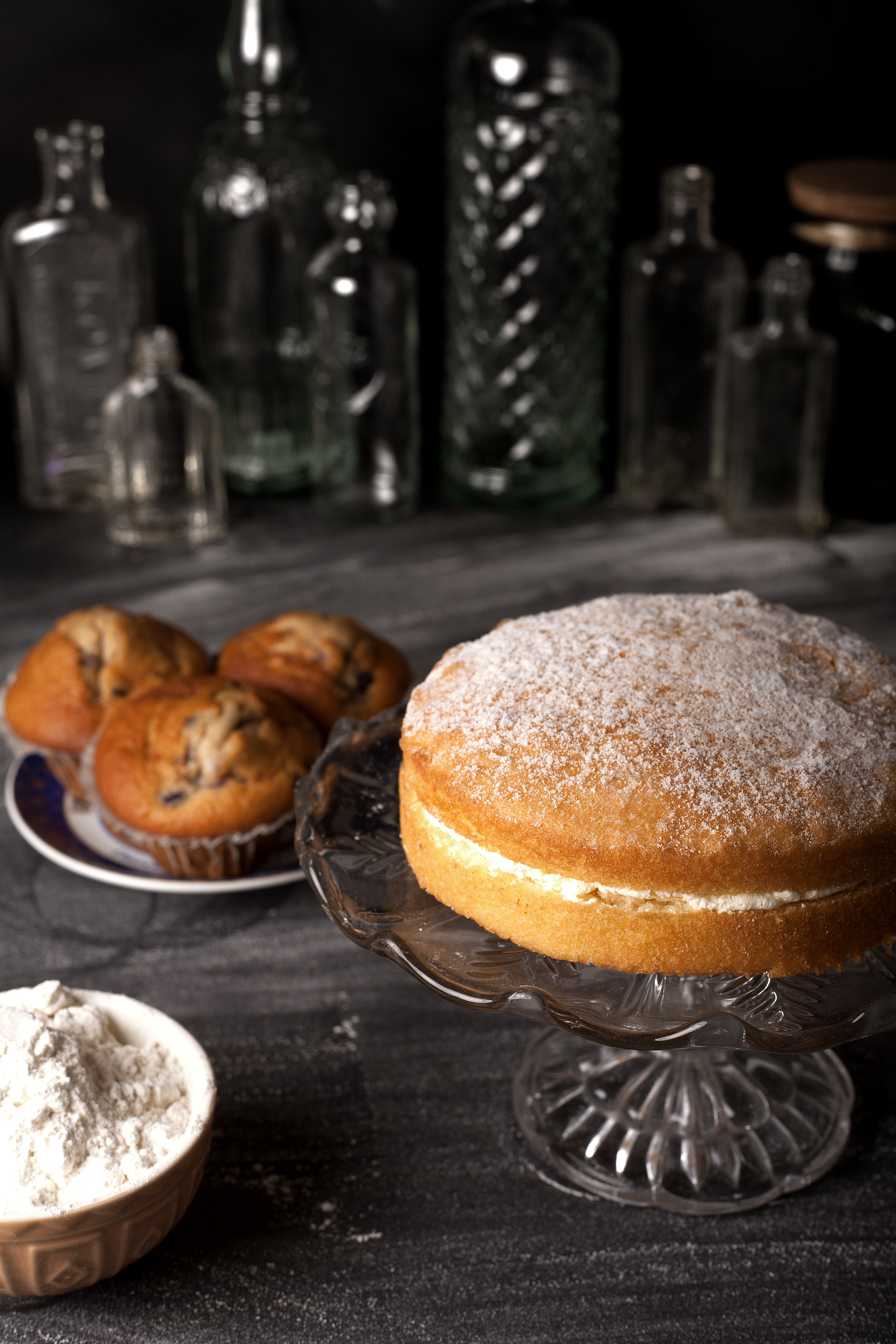 I think these shots are quite different compared to what I normally photograph for The Dalesman Group so I was really happy with the results. I wanted to keep the rustic, vintage feel to the imagery but I wanted to do it in a way that still felt contemporary and clean.

The products can now be purchased as individual bags on Amazon. 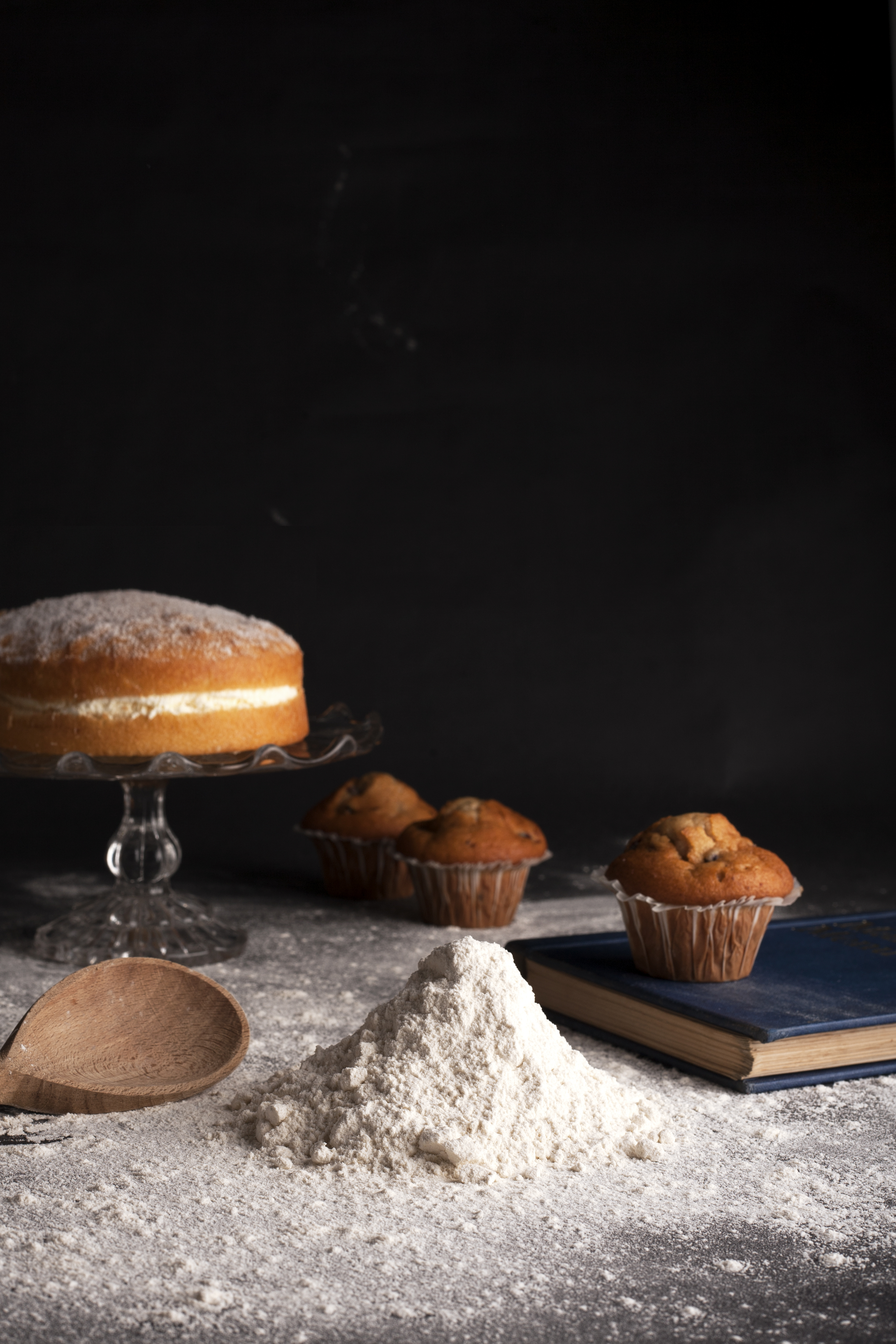 You can also buy the plain and the self-raising variety now from the Gordon Rhodes website. Click the link here.